A while back, E*Thirteen sent us a pair of LG1 Race wheels for our Rocky Mountain Maiden dream bike. We’d heard good things about the wheels and had been mighty impressed with them from not only a design standpoint but also by how well they had held up under the abuse of World Cup teams. For example, according to the Petaluma, CA brand: “Aaron Gwin has completed eleven runs at Fort William without failure while other riders destroyed several wheels with as many runs. Gwin rode the same wheels at Leogang the following weekend without truing, tensioning or bearing replacement needed.” 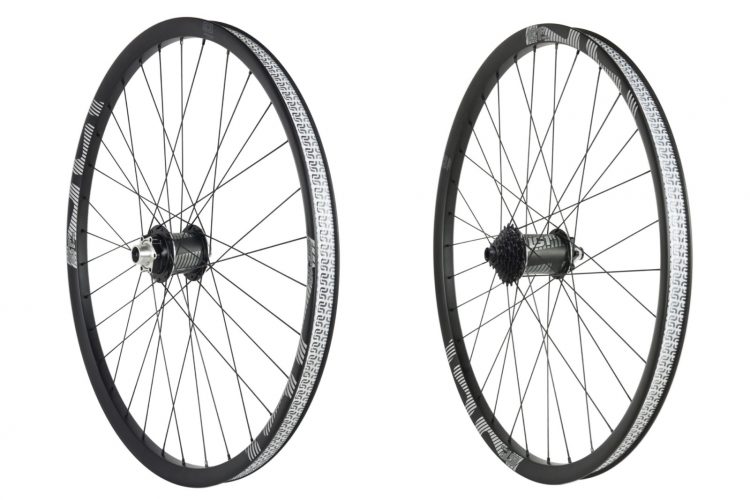 What initially made us curious about them was not just the tallish flanges or the carbon hub shells, but mainly the nearly dishless rear wheel and integrated 7-speed cassette which eliminates the driver altogether. Needless to say, per usual E*thirteen brought some truly original ideas to market. Read on for the full review. 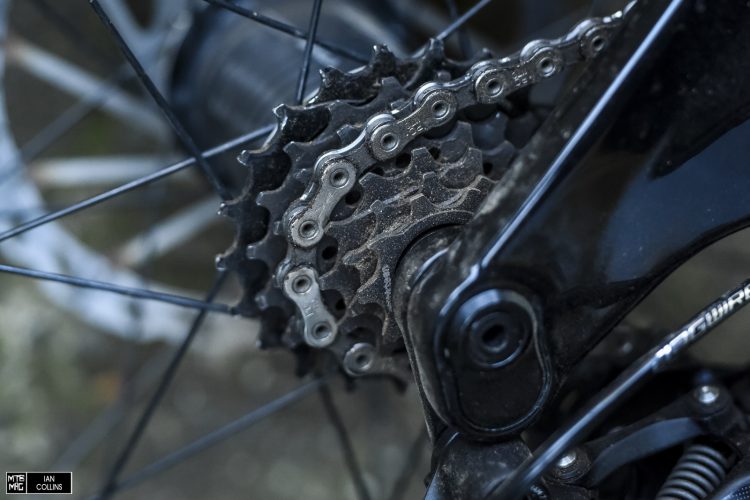 Pictured above is the integrated 9-21tooth rear cassette. There is no diver body. Instead, the pawls attach directly to the aluminum 21T cog which is bolted to a steel 6 cog cluster. Genius. This allows for more broadly spaced rear hub flanges and a rear wheel that has virtually no dish. Thus, it’s much stronger because the spokes have a better bracing angle. But not only is it stronger, it’s also lighter. The standard XD driver version of the wheel mounted with the lightest cassette on earth (SRAM’s 7 speed XO1DH) weighs 35 grams more than the integrated version. 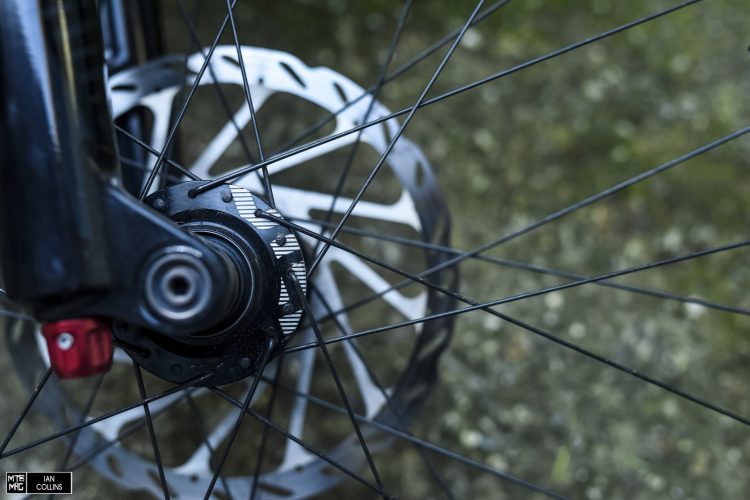 Because the front and rear wheels are just 1-2mm shy of dishless, you can get away with having only one spoke length for your spares. Nifty. 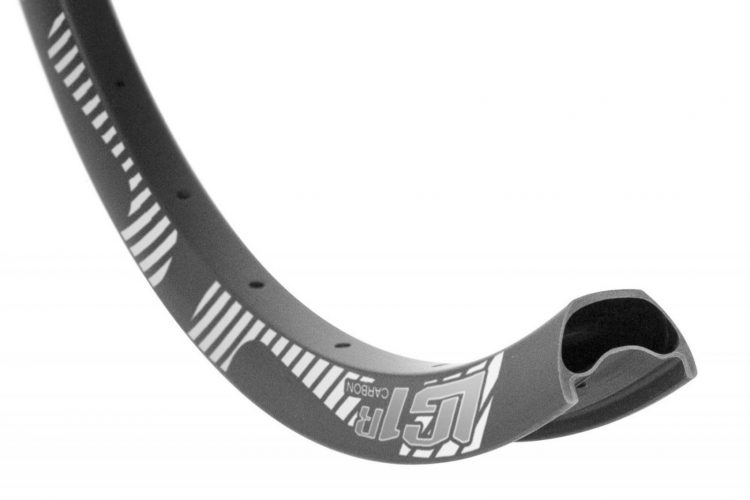 The LG1 Race uses a carbon fiber 27mm hookless rim. Moving forward it’s been updated to a 31mm version with the same profile. The rim’s sidewall is quite thick (as you can see in the photo above) and highly impact resistant. Because they are hookless, setup with tubeless was a snap. It was also easy due in part to e*13’s ingenious high flow valves. 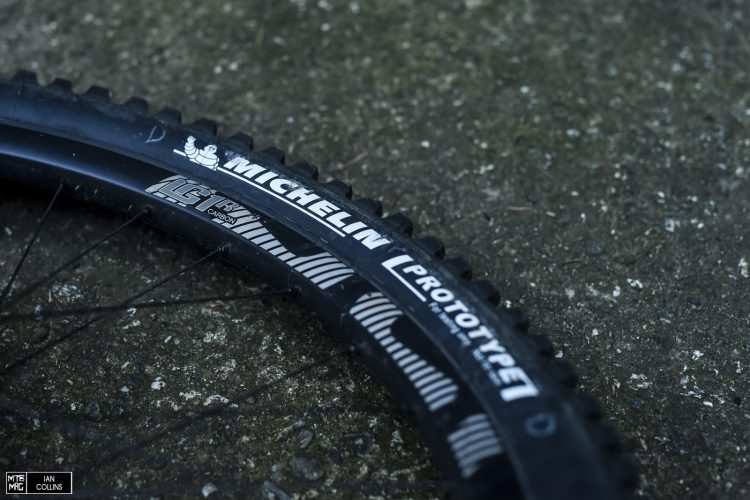 We mainly rode them with 2.35″ Schwalbe Magic Mary tires, then recently switched to the tires shown above. We can’t say much about the tires, other than the fact that they’re damn good and we can’t wait until they come into production.

When we first pulled these wheels out, we were impressed by the fact that E*Thirteen didn’t leave you hanging. When you spend good money on a proprietary carbon fiber wheelset, it should go without saying that you receive extra spokes & nipples. The wheels come with valves and tape installed as well as parts for multiple axle spacings, as they should.

The hubs have a fast engagement that’s fairly distinct and loud but not obnoxious. Three pawls with two steps on each provide 60 points of engagement. This equates to an engagement point every 6 degrees, making for a rather quick response when you get on the pedals. 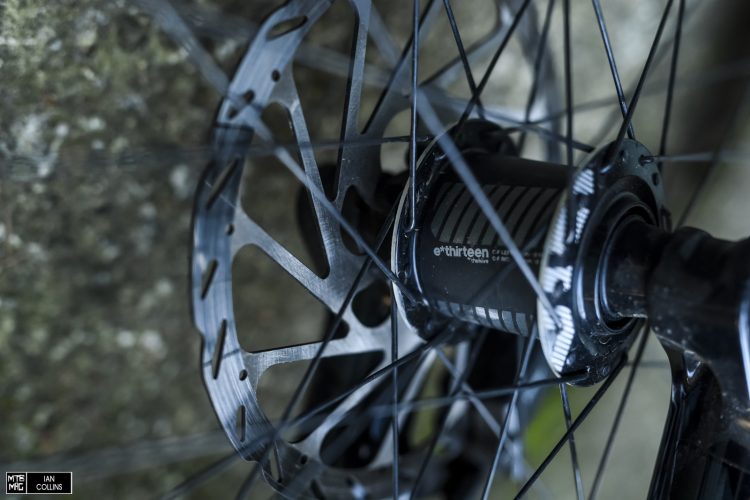 At 2106 grams, these aren’t the lightest DH wheels out there, but keep in mind that weight includes the cassette and essentially the driver body as well.  As a point of reference, the XD driver body version weighs 2005 grams. The hubs feature machined aluminum flanges and carbon fiber shells. Although the shells look cool, we’re not sure quite how much weight they actually save. Enough tech babble, here’s how they rode…

Straight away we felt the wheels were plenty stiff. Often times carbon fiber rims/wheels can be a bit too rigid, resulting in a wheel that deflects too much and beats up the rider. This was NOT the case with the LG1 Race. The carbon fiber rims took the edge off noticeably more than your standard aluminum DH rim would. After all, perhaps one of the biggest advantages to carbon isn’t just the weight savings, but its excellent vibration damping properties; particularly when laid up correctly. Speaking of rims, the LG1 Race rims are available separately in 27mm and 31mm ($499 & $549 respectively) should you want to lace them up as a custom wheelset. 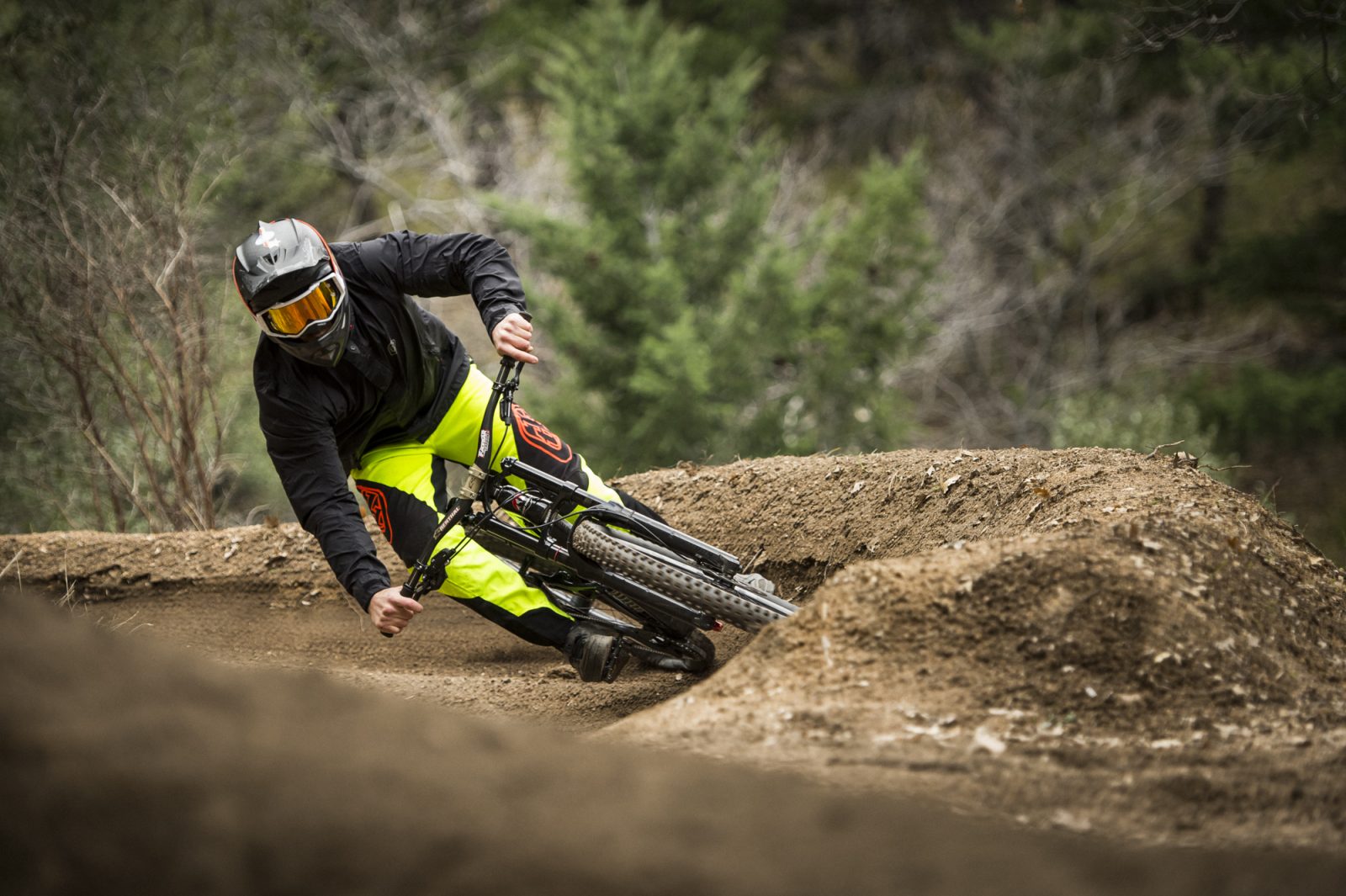 When it came to snappy, squared off turns, the LG1 Race had just the right amount of pop to them. We could crack turns off nicely without feeling any flex in the back end. Perhaps you could accuse us of drinking the Kool-Aid, but we really do think that this is largely attributable to the unique design of the rear wheel, and not just the rim itself. We bashed the hell out of these wheels for months and never once had to re-tension or true them. This typically isn’t the case for our tester with most wheels on his DH bike.

As far as how our tires felt mounted on the rims, that brings up an interesting talking point. The 27mm wheelset that we tested is rated for 2.1-2.4″ tires. As mentioned prior, the LG1 Race wheelset has just recently been updated with a new 31mm rim that’s rated for 2.3-2.6″ tires. We can only speculate, but for a host of reasons, we think that was a wise move on E*Thirteen’s part.  The new, wider rim not only tests stronger, but it also provides a better footprint for wider DH tires. We mainly ran 2.35″ Schwalbe Magic Mary’s on these wheels and they felt great, but the Michelins that we recently switched to are 2.5″ wide. As that is slightly wider than the wheels are rated for, unsurprisingly we did notice a little bit of tire squirm (see the back wheel in the picture above) when we ran lower pressures in the 24-28 PSI range. With that said, we never managed to burp the tires, much less roll them off the rim. With the updated, wider rim we’re confident these wheels will be even better still. 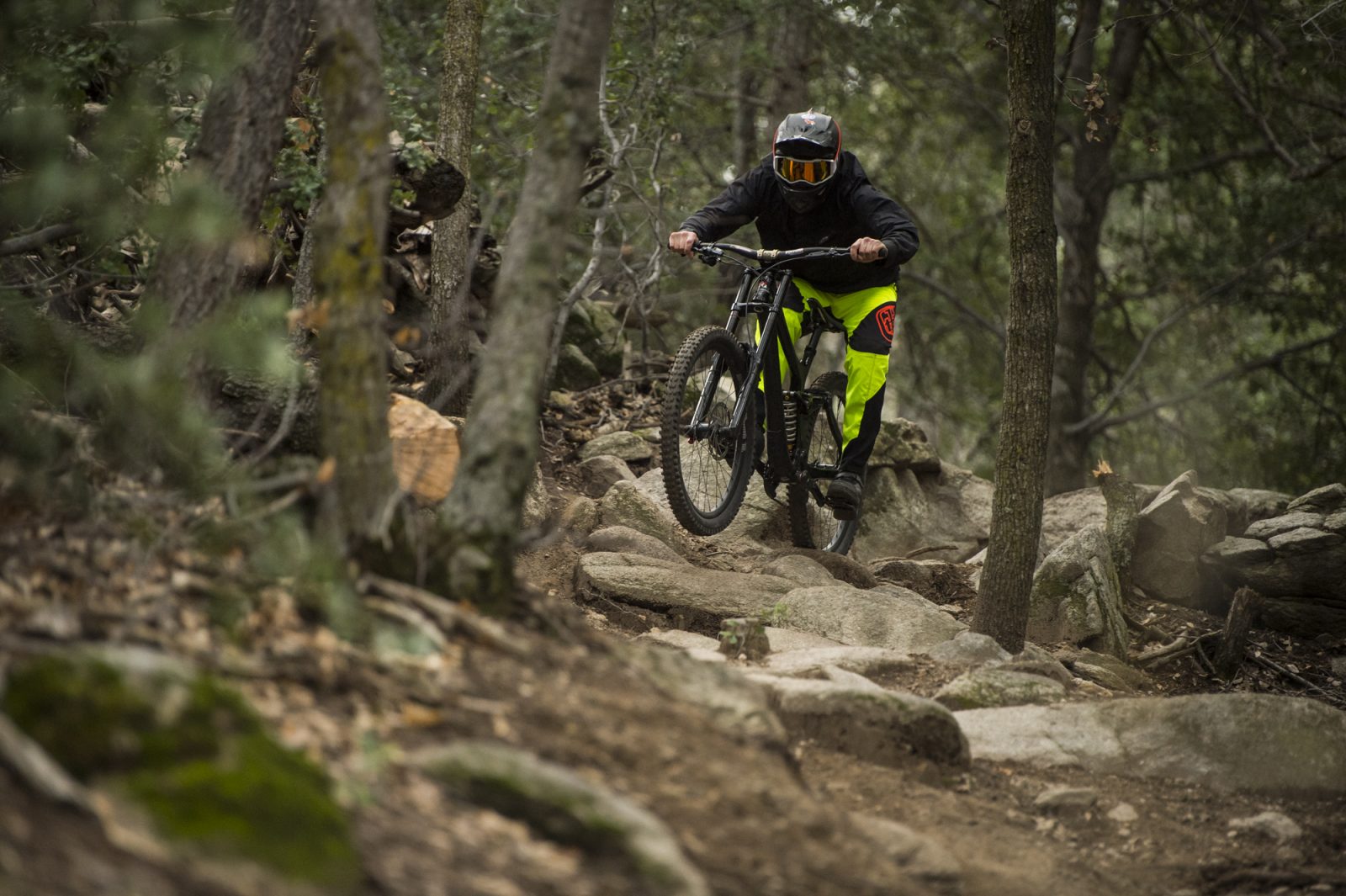 As far as impact resistance goes, we’ve had really good luck and that’s without utilizing any of these newfangled tire inserts, although we are curious about trying them. The bulk of the trails that we ride in Santa Cruz aren’t horribly rock strewn but there are some exceptions. We made a couple of trips to Northstar, Lake Tahoe as well as down to Southern California to make sure we left no stone unturned…no pun intended. We think the super thick rim sidewall is the main factor in the rim strength. We had multiple huge cases without issue. In one particular instance we came up short and hacked a rock landing resulting an a noise so violent that we got off to check the bike out…there was nothing to be found.

One last interesting caveat is that with the 9-21T cassette, you may want to consider a smaller front chainring. Compared to SRAM’s 10-24tooth, we found we could switch from a 34tooth front ring down to a 32T without feeling like we were missing out. This also helped ground clearance. Of course this will vary with rider, local terrain etc. but it’s worth mentioning and we noticed right away.

In the grand scheme of things, we’ve been loving the LG1 Race wheelset. They’re stiff but not too stiff. Sure you can build lighter wheels but they probably wont’ have this good of an on-trail feel, nor will they hold up as well as these have. We feel that’s largely due to some of the innovations that E*Thirteen have pioneered here. The direct mount cassette which forgoes a driver body, resulting in a broader hub shell is pure genius. We really do think that in terms of overall wheel strength, we had better luck with this back wheel due to the broad bracing angle and nearly dishless design. 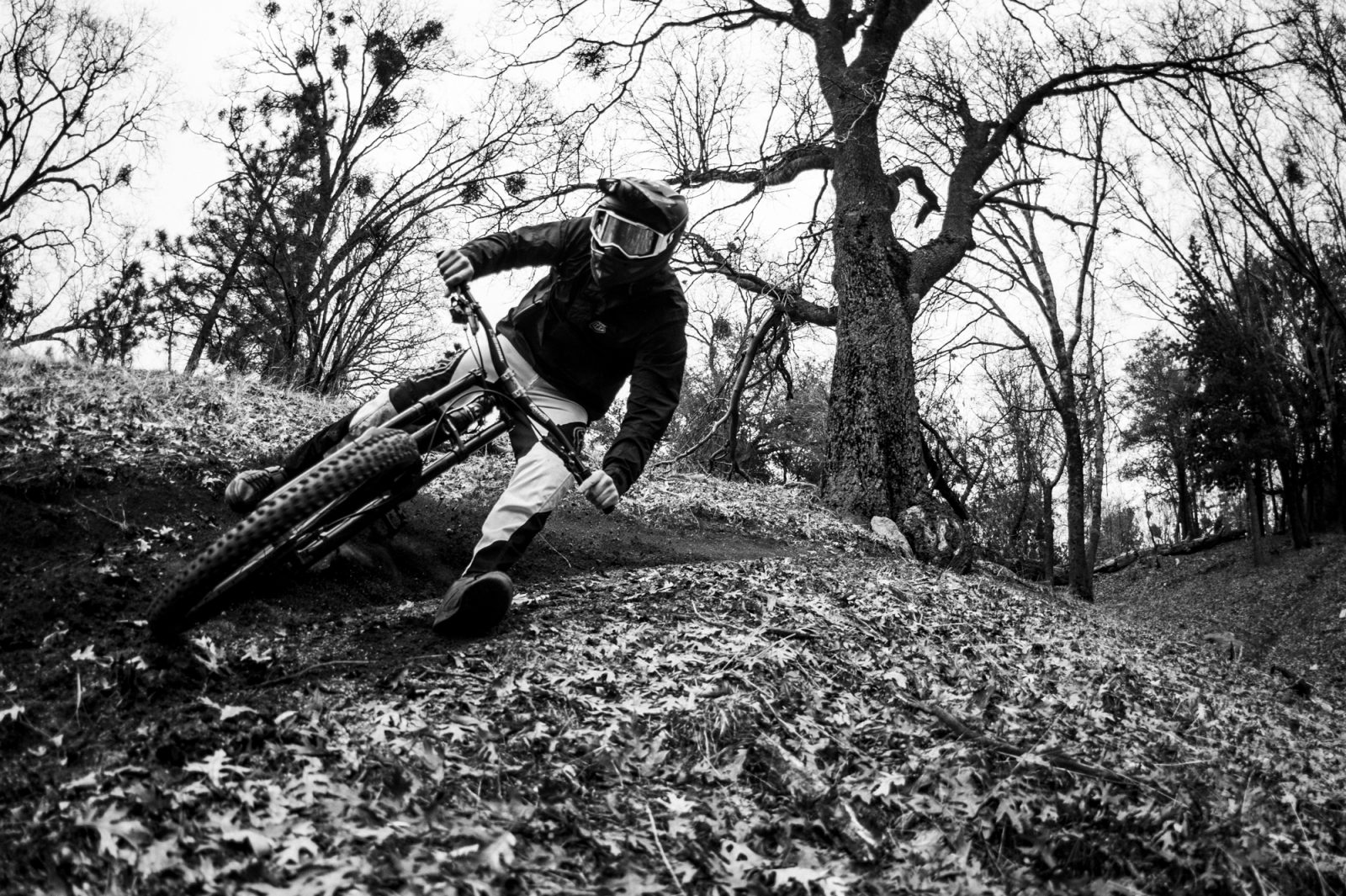 As far as price and value is concerned, the updated and improved 31mm version retails for $1998. Keep in mind that includes a cassette that would be substituting a $284 SRAM X01 for many dowhillers. Whether you, as a consumer are willing to shell out that much for a wheelset is your call, but we can say that the ride quality is absolutely top notch, the bearings and engagement mechanism were smooth and trouble free, and we never once flatted riding these wheels.  E*Thirteen also backs them with a solid warranty as well.