Most of us who pay attention to the bike industry are well aware that Evil Bikes had their fair share of trials and tribulations a few years back. More recently however, they seem to have pulled themselves up by the bootstraps and are regaining consumer confidence. It’s safe to say that “The Following”, their 120mm travel 29″ wheeled trail monster is the first bike from version 2.0 of Evil’s camp that has played a key role in showing that they’re here to stay. With the most aggressive geometry set on any 29″ bike to date, we had to give it a go and see what the hype is all about. After a few hard lessons learned in things like what type of hardware is best and which factories are worthwhile Evil have made leaps and bounds in sorting things out.  We can attest to this knowing that they are now producing their frames in an industry leading factory.

Evil seems to have ticked all of the boxes here.  The Following is well thought out and reeks of attention to detail.  The DELTA(Dave’s Extra Legitimate Travel Apparatus) system is driven by two dogbone links that are pulled downwards by a flip chip that adjusts the geometry without affecting shock rate.  A down tube guard is nice reassurance in protecting from errant rocks coming off of the front wheel. The construction is BEEFY as you can see by the headtube.  Internally routed stealth dropper routing keeps it clean aesthetically.  A small gripe was that water can get into the frame via the orifices which the cables route through – this has been addressed on the new Insurgent via rubber grommets that seal things off.  The rear brake and derailleur routing are sleek and non intrusive, and the Following does accept a front derailleur for those who feel the need.  We weren’t a huge fan of the Shimano rear axle so we swapped it for a solid one after a couple of weeks.  ISCG05 tabs let consumers know that the bike welcomes being built up with a chainguide.  Lastly, a very well designed rubber chainstay guard protects your investment and keeps it running quietly by damping chain slap. 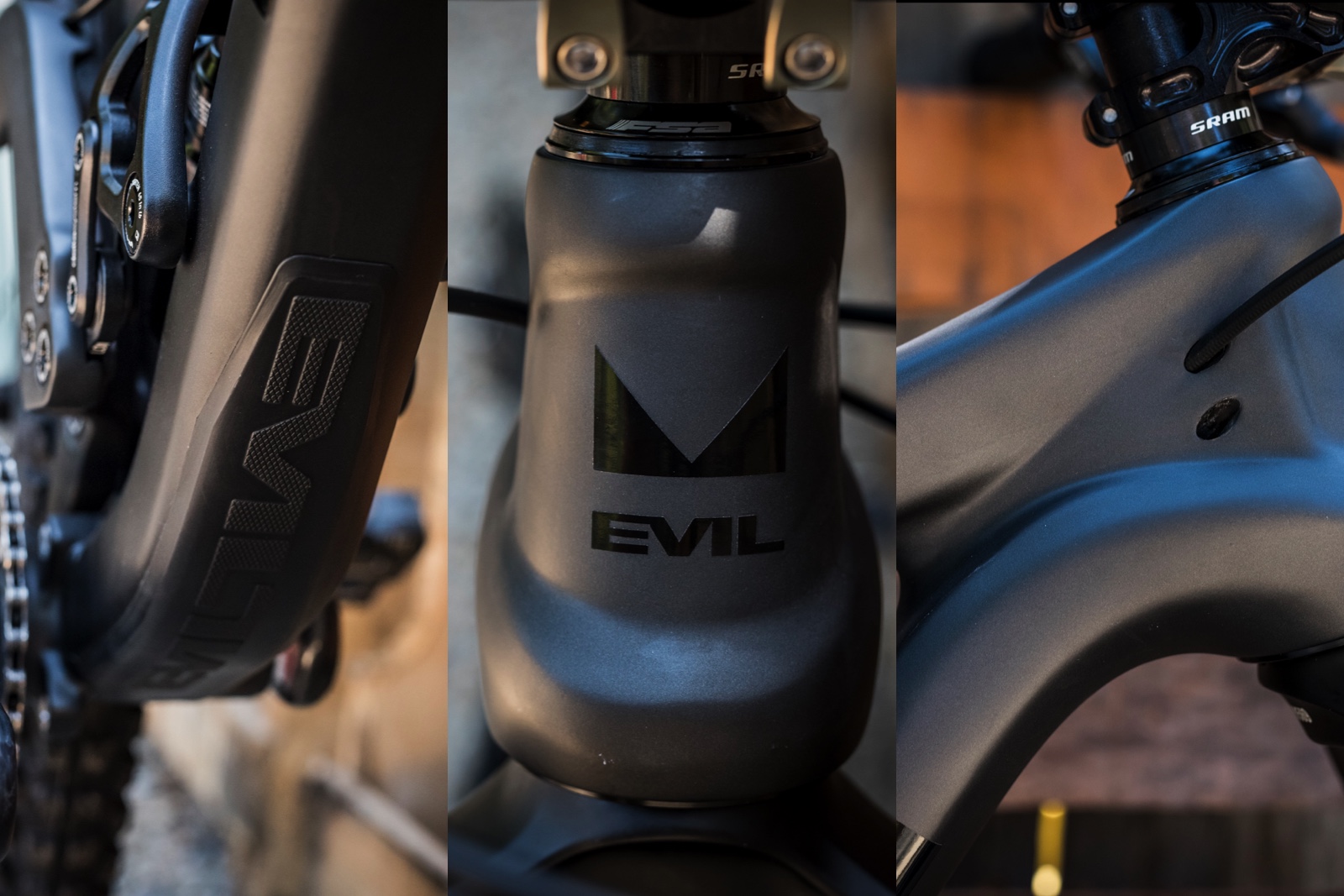 The Following boasts some wild numbers for a 29″ bike.  A 13″ BB, 66.8º head angle and 16.9″ chainstays are figures you almost never see on a wagon wheeler.  They are screaming for rowdy descents but anyone who is super concerned with climbing will likely be a bit dubious, but rest assured the frame strikes a nice balance and it has options galore.   We tested the Following as a frameset – retail is $2,599 US by the way.  We  bolted up our own choice set of top notch parts that we’re familiar with so we could really just focus on the frame.  Let’s see how this space aged looking beast did out on the trails of Northern California. 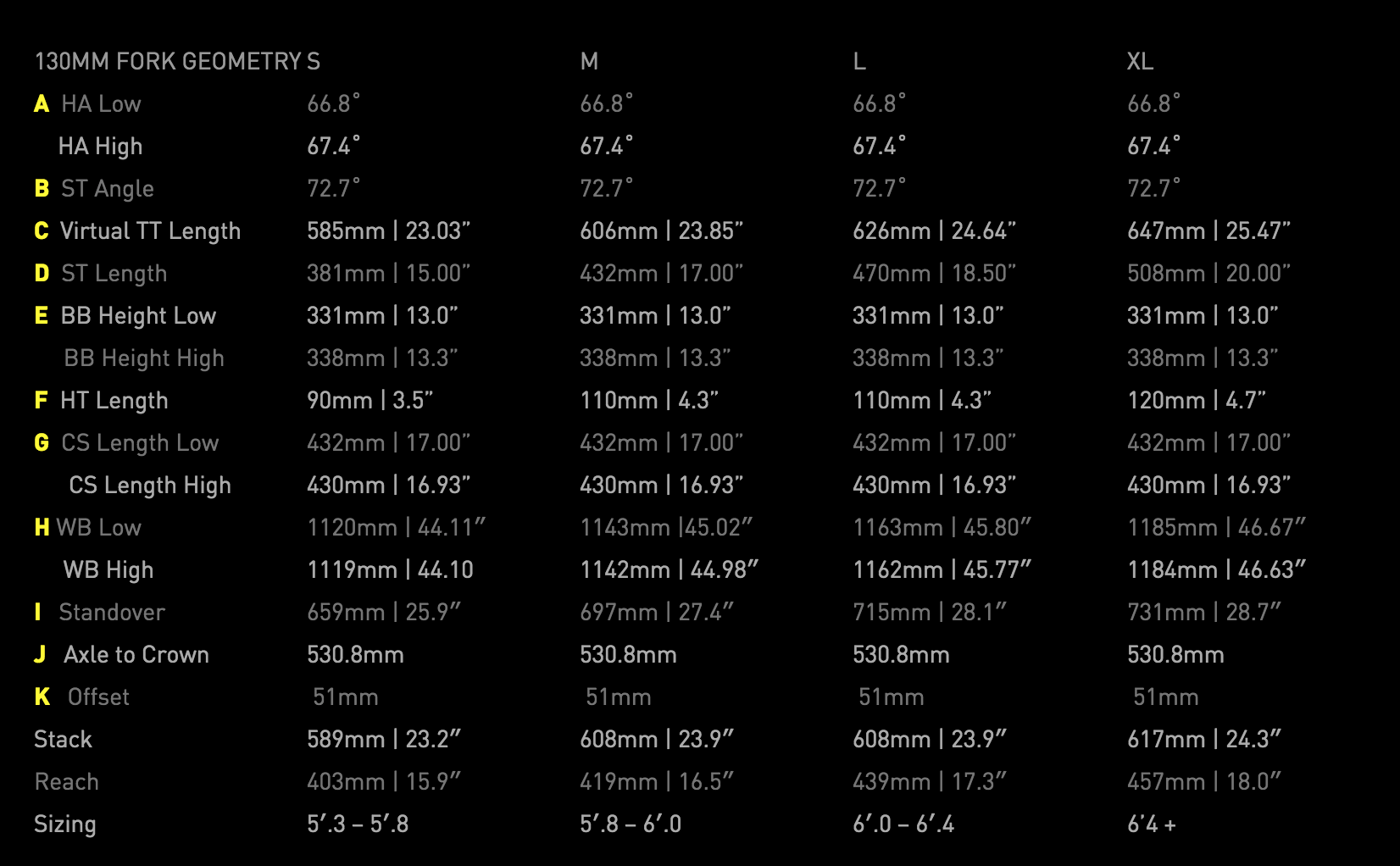 We tested the Following with a 130mm RockShox Pike RCT3. When we first got the bike, we had bolted up a 46mm offset version of the fork. After chatting with Kevin Walsh, the owner of Evil, he absolutely insisted we try the bike with the more stable 51mm offset Pike. It was a bit of a serendipitous accident, but we were quite stoked to try the bike both ways and see firsthand why Kevin was so adamant about running the offset he intended for the bike. We also got to test out two different rear shock tunes and rode them with a varying number of volume reducers. 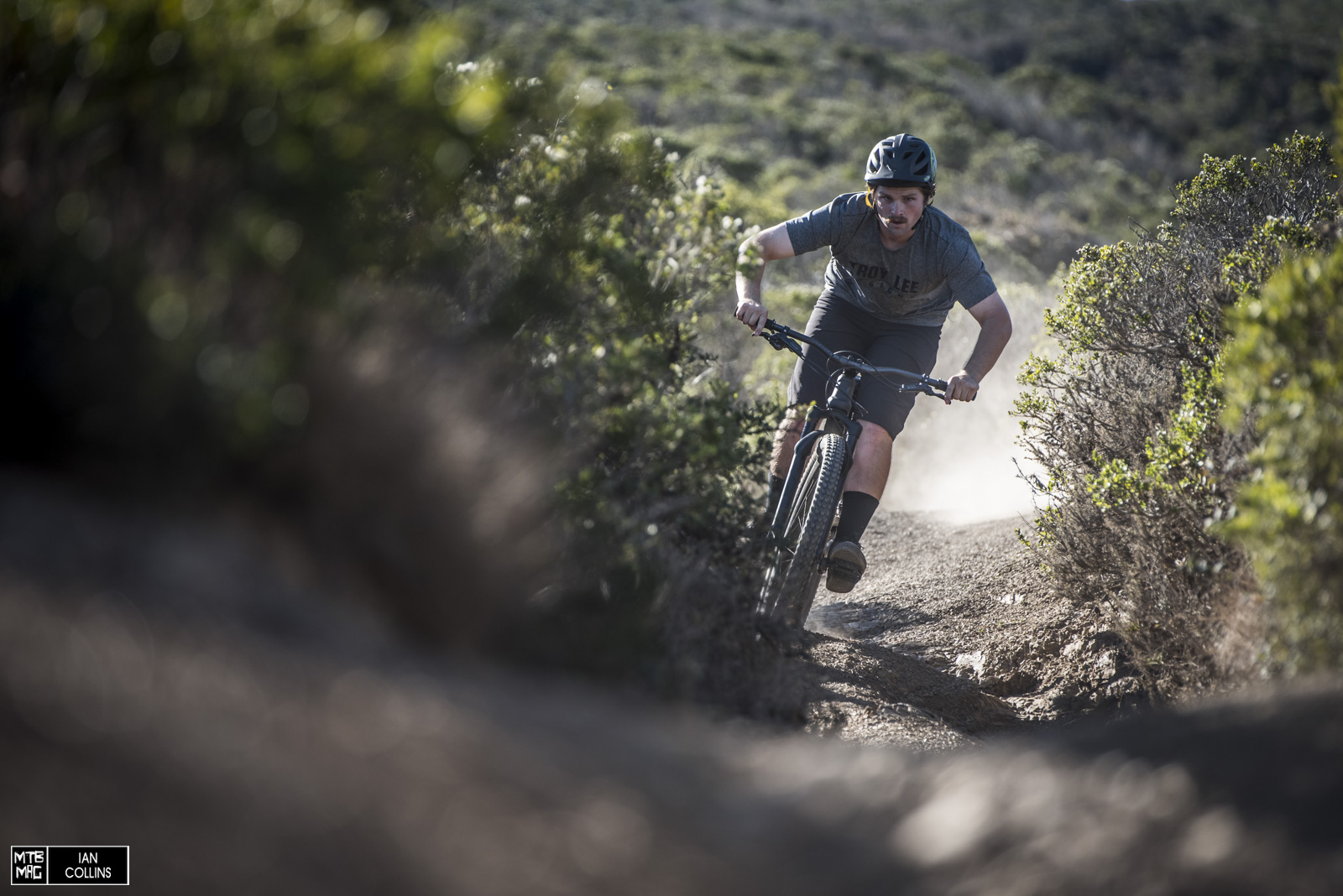 As one would expect, based sheerly off of the numbers the Following’s wasn’t designed with with ascents being the priority – at least not the way we set ours up.  That said, geometry isn’t everything – the suspension was incredibly composed and it was one of the most neutral pedaling bikes we’ve ever ridden.  At times we had to check to see if our shock was locked out or not while pointed uphill, and quite often we chose not to even bother using the lockout.   So, with regard to how the bike climbed in terms of geometry and body position, it’s more complicated than one would think.  As mentioned earlier, we rode it with a 46mm offset fork initially.  With that fork and while using the “DELTA” link in the high BB/steep head angle position, the bike climbed very very well.  It steered quickly in switchbacks, the seat angle was a bit steeper and we felt it was a bit easier to get our weight up towards the front of the long 626mm top tube.  When we went with a more relaxed fork and head/seat angle we struggled to get our weight forward on the really steep climbs but found that sliding the seat forward a bit helped offset that. In the long run we deliberately chose to set this bike with a very downhill oriented bias so we can’t really knock the way it climbed with those given settings.  Either way, getting to ride it both ways was a testament to its versatility.  Consumers can set the bike up both ways and any way in between – especially if they decide to dabble with varying head angles via +/- 1º or +/-2º headset cups that Evil offer. 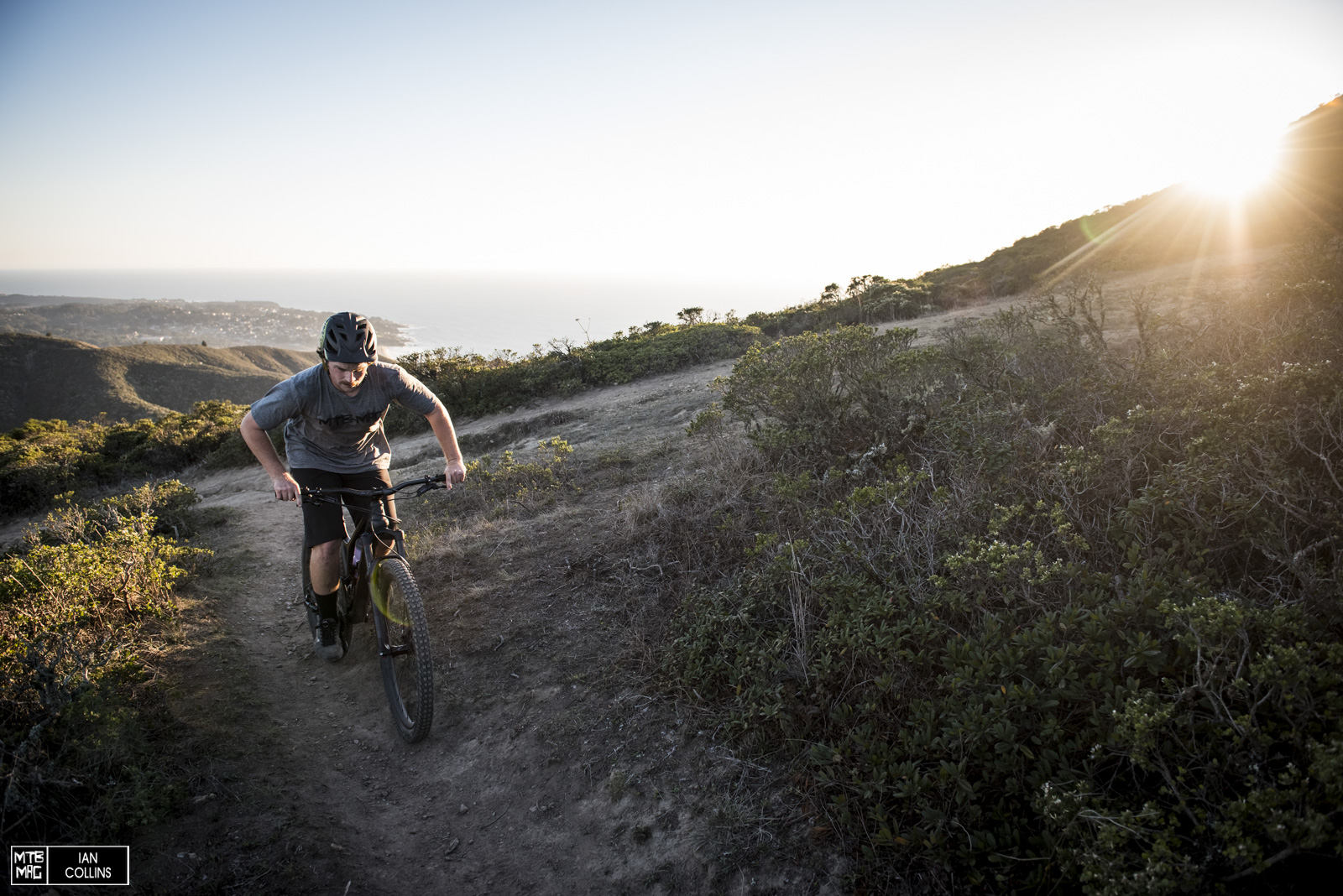 Right away, our 6 foot tall, lanky tester was quite pleased to be able to run a 29″ trail bike with just a 50mm stem.  Quite often we’ve ridden other bikes in this category that we feel are rather capable, but their short top tubes bar us from running anything shorter than 70mm, leaving us a bit hesitant and holding back at times.  On our first few rides in the high position with the 46mm Pike we were already impressed and floored by the not only the rowdy terrain we could easily tackle on the Following, but also just how poppy and playful it was.  The super short chainstays allowed us to crack turns off and manual with the greatest of ease.   The low BB let us really dig into the turns with a mind boggling amount of traction.  It was hard to believe we were on a 29er. After a few weeks we worked our way towards a full 180º regarding setup.  Starting with switching to the low bb height and then swapping to the 51mm offset Pike, we eventually set the Following up as the most aggressive 29″ bike we’ve ridden to date. 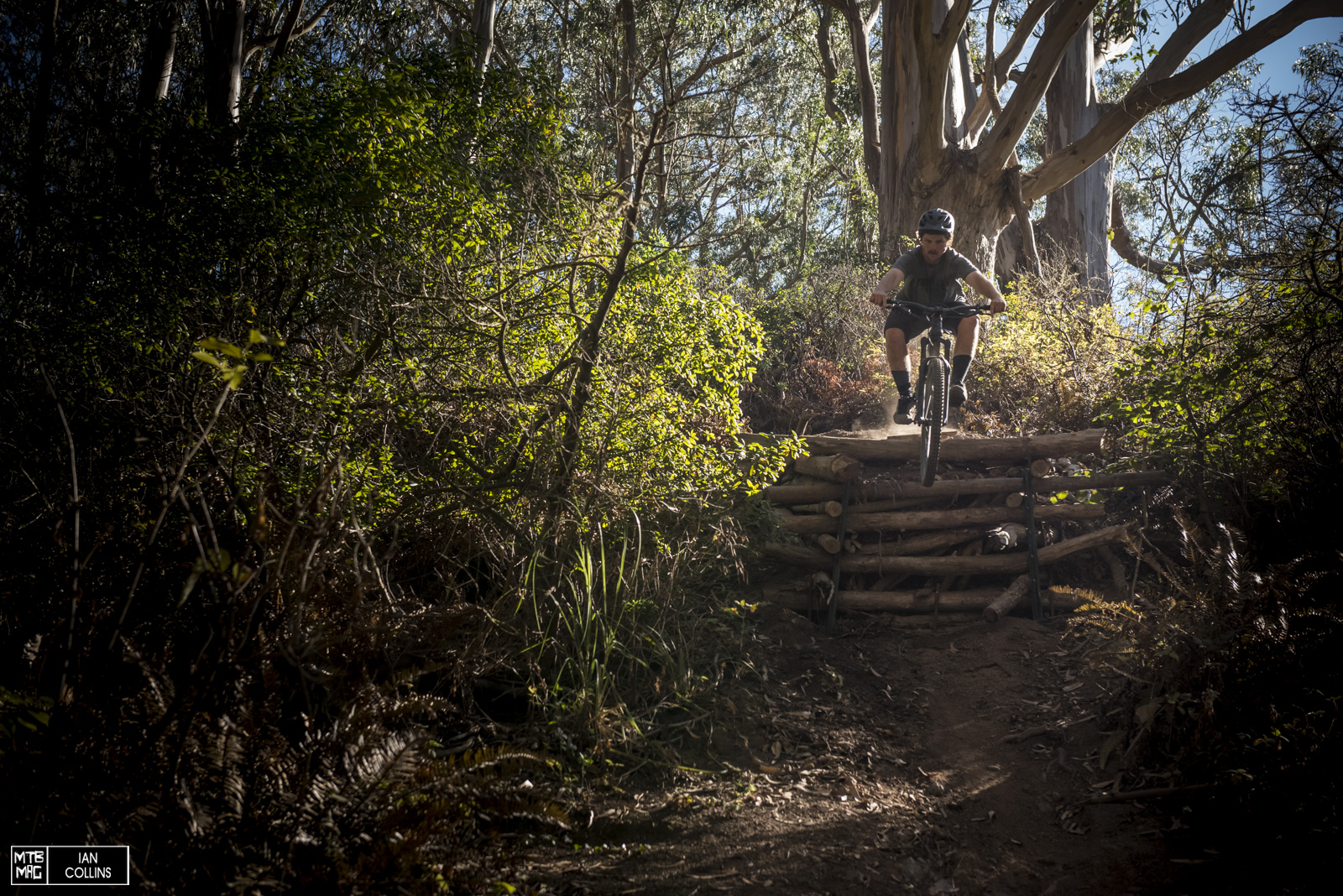 Coming off of a 160mm travel bike this took a surprisingly short amount of time to adjust to.  We feel that on most terrain, the Following could hold its own against the average “Enduro” bike these days – it’s just different. It’s more of an all day bike.  In typical 29″ wheeled fashion, it carries speed better than 27.5″ wheeled bikes, but due to sporting a bit less travel, you have to ride it a bit differently.  You need to be a bit more careful with your lines and avoid the big holes and G-outs.  In turn, the big wheels take the edge off on chatter, provide more grip and want to stay up – it’s crazy geometry makes it freakishly light on it’s feet. In terms of handling, we’ve been literally blown away and we haven’t ridden anything quite like it.  It flat out decimates every other 120mm trail bike on the descents. Especially those that are a bit more on the traditional side of things. We are huge fans of Dave Weagle’s suspension designs and this is no exception.  The dual progressive leverage rate curve is possibly the best tuned system we’ve ridden to date.  It’s light off the top, supportive in the middle and resists bottoming nicely.  That’s everything anyone could ask for in the suspension world. DELTA’s kinematics definitely pair well with the RockShox Monarch Debonair that the Following is spec’d with and it’s evident that the guys at Evil put some time in getting the tune just right.

Speaking of the rear shock – after a few weeks of riding, Kevin sent us an updated “Enduro” tune.  With both shocks, we worked our way up from zero “bottomless ring” volume reducers in the shock and eventually settled into using 3 on both units.   For those who are unfamiliar, adding volume reducers to a shock is how you can build a bit more progression into the suspension and make it less linear in nature. While we didn’t notice a massive difference between the two tunes, the second seemed to resist bottoming a slightly better and provided a bit more pop while still having very controlled rebound.  Speaking of pop, we’ve never ridden a 29″ wheeled bike that was even close to this comfortable in the air.  EVER.  This bikes loves to jump, pop bonus lines, drift and slap turns.  It’s a freak.

In summary, we hate to sound cliche but this is “the downhiller’s trail bike”.  That phrase has been used before but it couldn’t be more fitting here.  While climbing isn’t its forte, given how many options Evil incorporates into the frame regarding setup and geometry it can be set up to climb incredibly well – especially if you slap on a 120mm fork (which we never tried).  Regardless, Evil’s marketing is crystal clear – this bike is aimed squarely at getting rowdy and it can do so all day without wearing you out as much as a 160mm bike – that makes it a game changer in our eyes.  Any time a bike comes along that blurs the lines of categories we get stoked.  Evil rider Aaron Bradford recently won the Trans Cascadia aboard it.  For those unfamiliar with Trans Cascadia it’s a 4 day, 17 stage race with 32,000 feet of descending in a blind format.  So yeah, you get the point, the Following is massively versatile but what’s most refreshing is just how capable and fun it has proven itself to be.   With regards to durability we’ve had zero issues.  After our first ride, some hardware loosened – after we tightened it it settled it and hasn’t budged since. We’ve ridden it on trails that would have us puckered on a DH bike and it didn’t flinch.  What more can you ask from a 120mm bike?

OK, so how does the Following stack up in terms of value?  $2,599 for a frame isn’t cheap but it isn’t sky high – for a boutique carbon fiber frame it’s a relatively standard, middle of the road price.  If it sounds steep, consider some of their full builds.  Their X1 build kit is very much value packed and comes in at $4,999 with an fantastic spec.  All in all, the Seattle brand has made a big comeback and they’re huge innovators.  It’s an exciting time to be a mountain biker when companies like Evil are pushing the limits of geometry and design.

[Video] The Rise of Straightline