Back in late 2015 we carried out some back to back testing with Formula Brakes and picked our favourite brake to do a long term test. After a few months on the bike and after publishing, Formula’s Vittorio Platania suggested we try their older RO system as well and run it back to back in Punta Ala with their new system, to give some greater insights into how their products have moved on and what a radical redesign can do.  So we put some new time on the old RO and new Racing RO brakes. 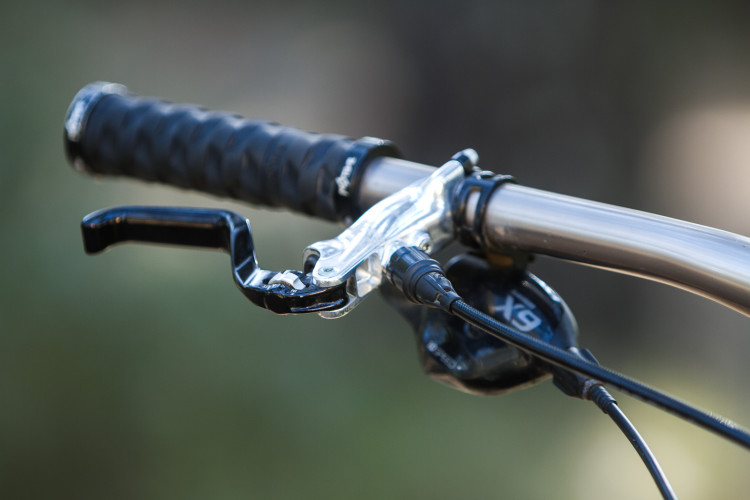 Formula’s older version of the RO brake. The lever design is a push piston design and sits fairly plainly in view on the bar. It also has a pad adjustment knob where the hose reaches the master cylinder. Their new more compact RO Racing version which we had been testing before. The lever blade design is smaller and is also a very different pull piston design. Note the adjustment for reach and pads  have been slimmed down or removed (pads).  Formula worked on the coatings and material quality of each part as well as changing the brake lever design. 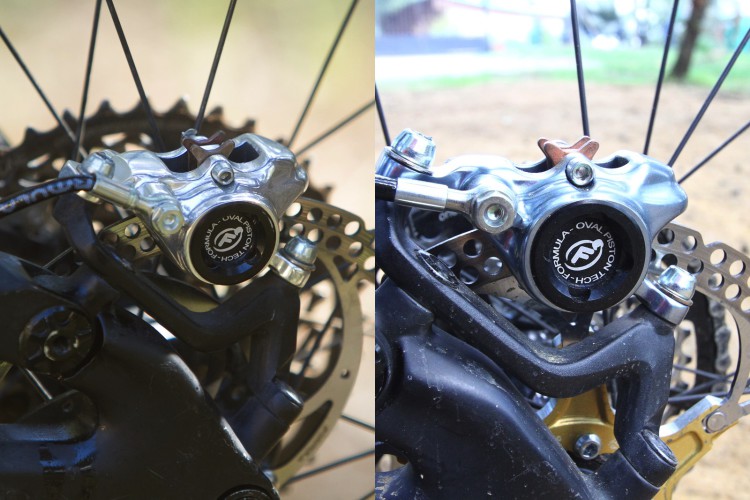 The RO racing calipers themselves have had very little obvious updates, in true Formula style they are mostly incremental and unseen if there are any. Their RO calipers are a proven design. Pad compounds and shape remain the same. 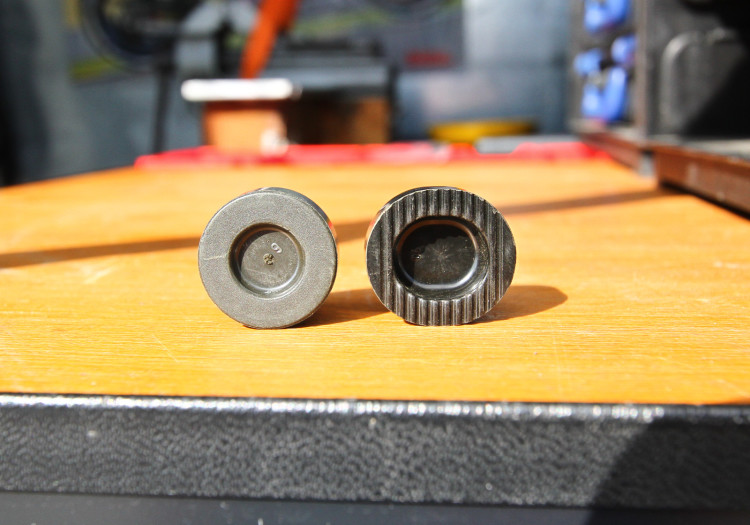 Formula RO calipers have an oval piston (on the right), compared to a more traditional circular piston. The discs have changed and have a two piece design compared to a one piece design in the past.  The aluminum spider saves weight. 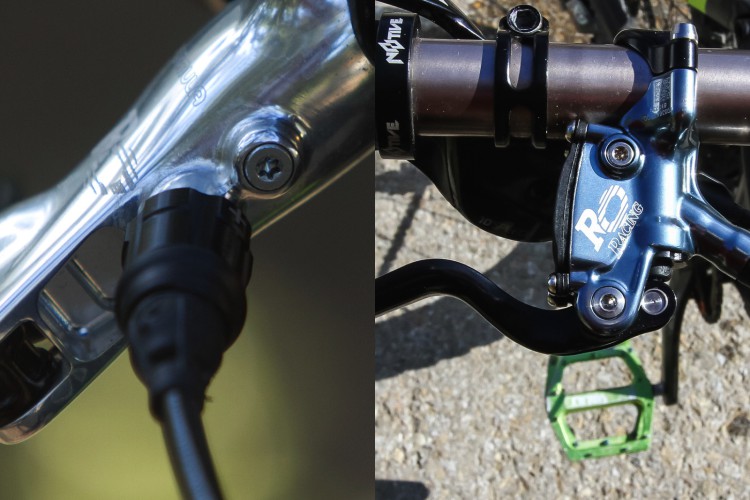 The old lever had a single bleed port, the new design has a bleed port now on both sides of the flip-able lever, this relocation improves the bleed process, including making it easier to access the the lever when attaching the bleed syringes. 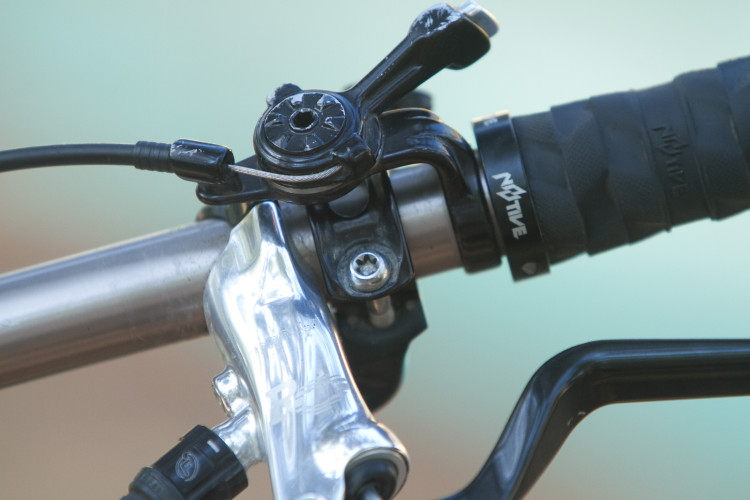 Bar real estate is unchanged, with Formula using the same bar clamp width as the older brake. Bars have been pretty busy in recent years with levers and buttons being in fashion, here even with their old design, the lever gave a lot of space for other controls alongside. We mounted a bulky Reverb clamp next to it and it’s possible to see how well it all fits in around the old version. 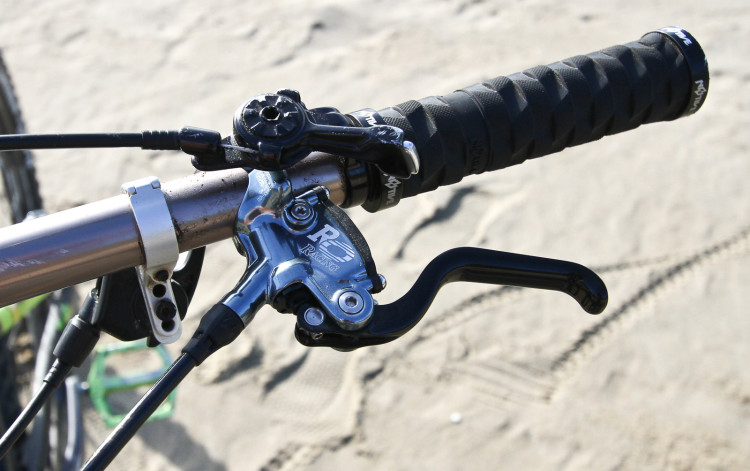 With their new design only the reservoir body is marginally wider, but it still fitted on our bars with no problems. Pod mounted seat post controls are also fine with the Formula form factor. We would go as far as to say that of all the brakes on the market, both of the Formula brake versions we tested gave us the most choices when it came to flexibility with mixing different control mounts from different manufacturers up close.

Where it really counts is on the trail, and this is where the two brakes showed how differently they functioned.

Lever Blade Design – We felt firstly that the new smaller version has a more tactile feel to the lever, it’s more subtle and lighter weight. We like low profile when we ride, more comfortable for one finger braking, especially if you are someone who likes to drag their brakes a lot close to the bar. The old lever had a harder feeling and less subtle design.

Modulation – This was where we really noticed the big difference between the brakes. The new levers feel like they have greater travel and a smoother lever movement.  It’s now possible to control the bite point with finer precision. The original ROs were more on/off in feeling. This big change was very noticeable on all the long descents. Interestingly, both brakes did not fade and lever feel was always consistent under heat, but power control felt less tiring with the new lever. Both used DOT fluid. Improved modulation was the stand out feature of the brake comparison on track.

Stopping Power – Both stop really well especially when pads and discs are bedded in. The new lever design was easier to control how you stopped, which links back to our previous point. Long descents became less tiring on the hands. We could control bike speed better with greater modulation in most situations, especially when steep and rough.

Adjustability –  The new levers can sit closer to the bar, even with the old lever adjusters screwed right in, the older levers are pretty far from the bar. We also felt the pad adjustment knob was unnecessary on the new lever (hence why Formula removed it). They’ve now made it necessary to use a tool to adjust the new lever reach. Partly to maintain a low profile look and partly because Formula felt that racers prefer a no fuss approach to brakes. We generally found ourselves adjusting the lever a lot less with the new design, we sometimes went many rides with out even feeling the need to adjust or vary the feeling.

Weight – We did not weigh the new and old sets of levers and hoses as a direct comparison with slightly different hose lengths and pad wear would bring up errors that cant be corrected. The new brakes are specified to be 360 grams total, the older brakes are heavier at 375 grams. The pull piston design and overall simplification as previously noted, is what allowed this weight saving, however – it is not a noticeable trait that we can feel on the trail.

Comparisons can be controversial, however we have to say that Formula have really delivered an improved brake from one year to the next by focusing on their lever design. The newer lever blade feel is excellent and stopping power is better controlled. The RO caliper on the other hand seems to be a proven design so they felt no need to change it.  Many manufacturers approach brake development and evolution at the moment in this way.