The D.O.S.S. – Fox’s first dropper seatpost was widely known as one of the most durable offerings on the market; but with a 3 position adjustment, it lacked the alluring infinitely adjustable travel that most mountain bikers began to expect. Some time ago Fox went back to the drawing board and engineered the Transfer seatpost; it has two different lever bodies, is available in 3 travel settings, in 2 diameters with both internal and external cable routing. On a couple of different bikes over the past 5 months we’ve been testing the Transfer Factory, their Kashima coated, flagship dropper seatpost. Here’s what we thought of it… 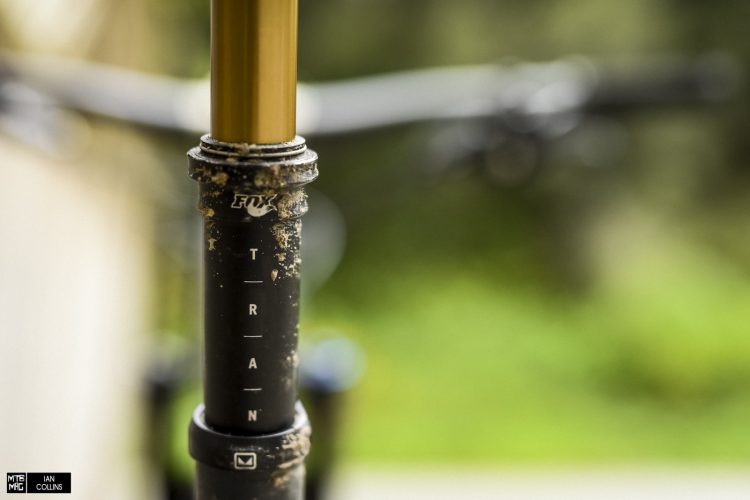 Hydraulically damped, cable actuated and nitrogen sprung. That seems to be the new norm to some degree, but there’s more to the story with the Transfer. A key point which you can see in the photo above is that Fox found an interesting way to accomplish an external actuation for those who ride bikes without stealth cable routings. They also managed to move the cable’s actuation point down to the shaft seal, a few inches lower than the seat clamp, thus limiting excess cable housing and its inherent movement in usage.

Spool valves and pressure relief valves? Wait what? Without getting into too many technical details, we’ll give you the short and sweet explanation:

The spool valve is quite an improvement over the stock, disposable cartridges that some brands choose to spec on their seatposts. A large piston working in conjunction with the spring backed spool valve allows the rider to better modulate compression and extension speeds; thus providing less of an on or off feel. It’s also rebuildable and more durable than sealed cartridge systems.

Additionally, there is a pressure relief valve at the top of the system which helps manage a handful of factors that can vary depending on your ride such as frequency of use, elevation and temperature. This valve allows the pressure to balance out and provide consistent performance regardless of the aforementioned variables.

Setting up the Transfer is a snap. In all honesty, it’s one of, if not the easiest seatpost(s) that we have ever worked with. We chose the 1X lever as it is not only more ergonomic than the 2X/3X front derailleur style option, it also has a slightly more positive feel. Anyhow, the cable provided with the lever kit starts with the cable end going through a bushing that pops into the bottom of the post (shown below). This makes seat/seatpost removal completely tool free, which is great for those who break down their bikes frequently for travel. 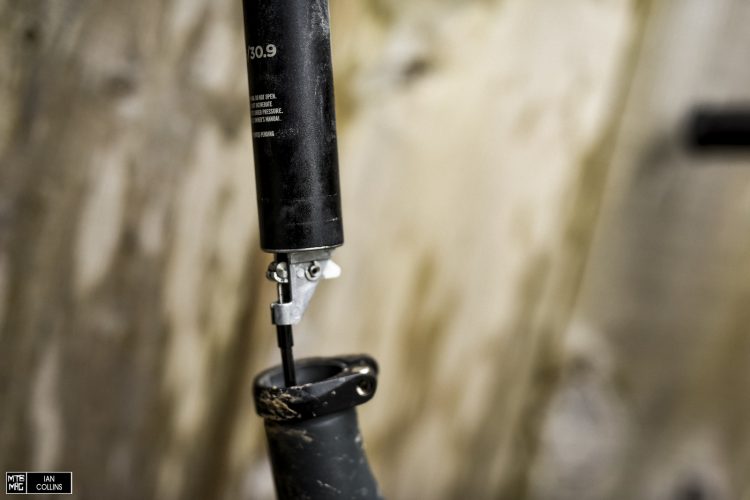 As the cable feeds through and up to the lever, the other end is cinched down by a 2mm set screw tucked away in the lever blade. After you cut the hose, you pop a small cable end on, crimp it and tuck it neatly and discretely in a sneaky little hole under the lever. That is shown in the bottom left frame below. Anyhow, the lever clamp is secured with a 2.5mm allen screw which we’d prefer to see beefed up with a 3mm. We liked the barrel adjuster and the angle that the cable housing feeds out of it. Although the lever is minimalist and subsequently lightweight, we found ourselves wishing for some sort of adjustment… Unfortunately, there’s no option to fine tune the angle of the lever’s paddle and with just one preset position, we were wishing for an inboard/outboard placement somewhere between the inside and the outside of the brake lever. In the grand scheme of things, we’re being bit nit picky and it’s no big deal to pair the Transfer with a host of 3rd party levers as the lever is sold separately anyway. Further on, you’ll see soon see why we think that this is one of the best seatposts on the market… 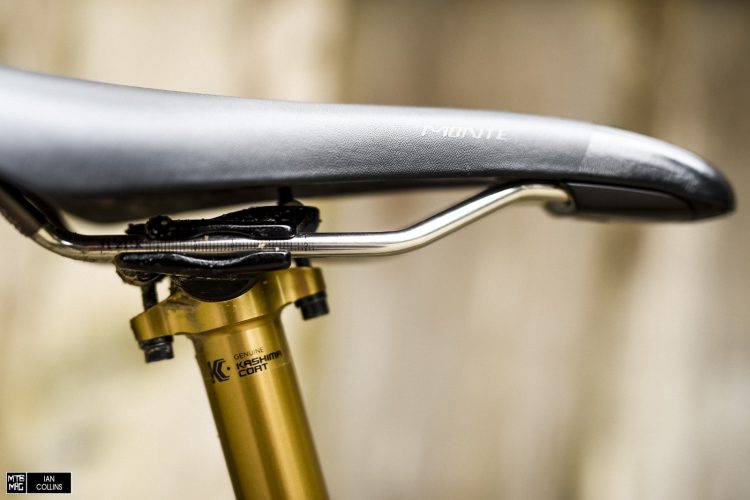 The Transfer seatpost featured a classic two-bolt saddle rail clamp with a simple fore/aft adjustment and a sturdy, creak free interface. Bonus points for the one piece extrusion’s clean aesthetics and Kashima coating. So…Let’s see the Transfer actually rode out on the trails.

The first thing we noticed was the incredibly light action at the lever; you definitely don’t have to put much effort in, just a light flick of the thumb. As far as the action of the post itself is concerned, the Transfer is smooth and seamless from top to bottom. The return speed isn’t adjustable, but it doesn’t need to be as it’s perfect right out of the box and in 5 months it hasn’t changed at all. On full extension there is an audible thunk so there’s no mystery, but it isn’t obnoxiously loud. The Transfer didn’t reveal any side to side play, and unlike some other seatposts on the market, when you pick the bike up by the saddle, it doesn’t budge. Another point worth noting is that the Transfer post never slipped, sagged or came out of adjustment. It was fairly foolproof in nature. While we noted above that we weren’t thrilled with the lever’s lack of adjustment, one thing that became more apparent was how small the lever paddle is, as well it’s bulbous shape. In wet weather, it was a bit slippery and easy to lose. Again, the seatpost isn’t married to the lever so it’s not a huge deal. As far as durability is concerned, after over 5 months of pretty heavy winter use, we never once felt any degradation in performance. Perhaps it’s all in our head, but the Kashima coating seems to be slipperier and perhaps a bit tougher than the standard anodized finish that we typically find on most seatposts. It seemed to not get as mucked up when we rode in sloppy, soupy conditions and remained friction free regardless of weather, elevation, etc. Most likely however, that is the due to the sum of the parts and a well executed design, not just the coating on the shaft.

As far as maintenance goes, we never got to a point where we wore out a cable housing, but if that was to happen, it’s a painless swap. Internally, we haven’t had a single reason to tear into it, so all we’ve ever had to do was wipe down and lube the Kashima shaft occasionally to keep things slippery.

While we weren’t thrilled with the lever itself, we look at it like a most contact points such as seats, grips and pedals. In other words, it’s a very personal part of the bike. Thankfully there are tons of aftermarket lever options. As far as we’re concerned, the Fox Transfer dethrones the 9point8 Fall Line and takes top honors in the dropper world.  We’re comfortable making this claim due to its simple setup, light weight, durability and incredible value. Speaking of which, at $264(US) the “Performance” version of the Transfer is $50 less than the “Factory” version we tested and virtually identical, save the standard black anodizing in lieu of the Kashima coating. That is hands down the best value available in the dropper seatpost world.