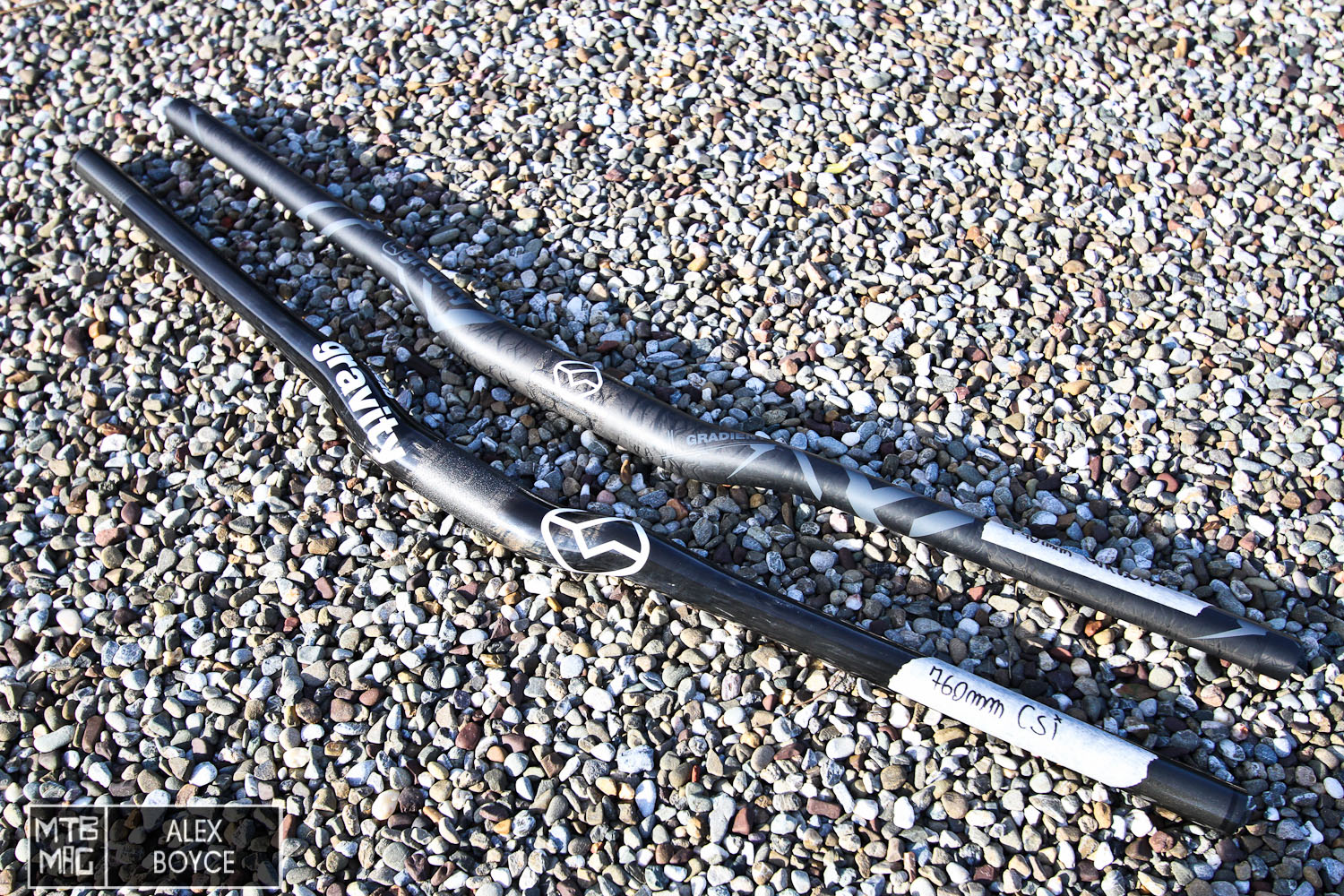 The bike market has exploded in recent years with new carbon products that are focused on the gravity segment. There was always a demand for this super material in cross country, but the changes necessary to make some of those products suitable for Enduro and Trail riding have taken a while to make.  One of the key components on a bike that has been really hitting the market hard in the last year has been carbon handle bars for Enduro. Full Speed Ahead have a Enduro based line of products under the “Gravity” brand that fulfil this segment and they sent us a few bars for us to test after we met them in Taiwan.

Introduction
The idea of our test was to evaluate  and see how the use of carbon in a handlebar affected out riding when compared directly to an aluminium bar. Luckily Gravity make two bars with the same rise sweep and diameter in carbon and aluminium, the only difference being length and material out of the box. 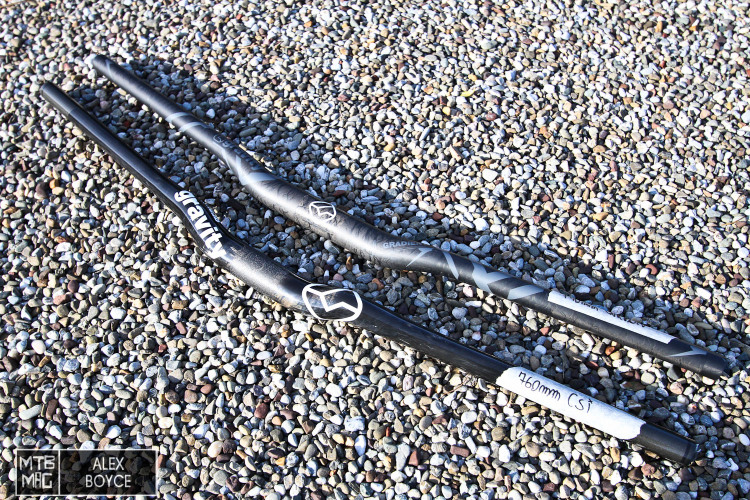 Two bars, one carbon one Aluminium. 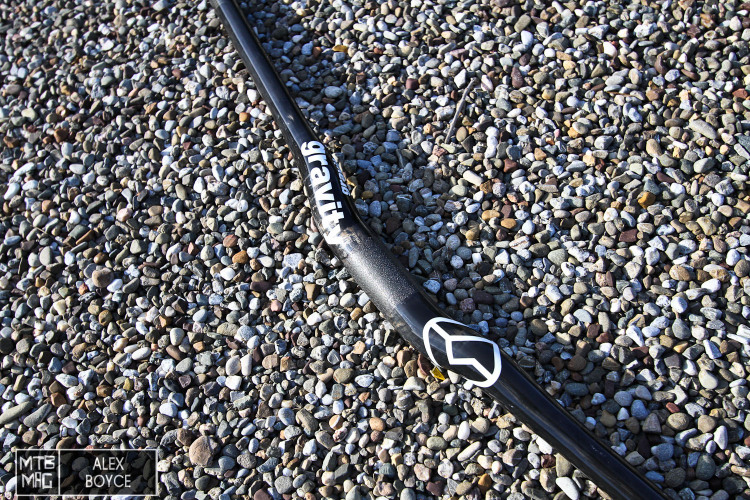 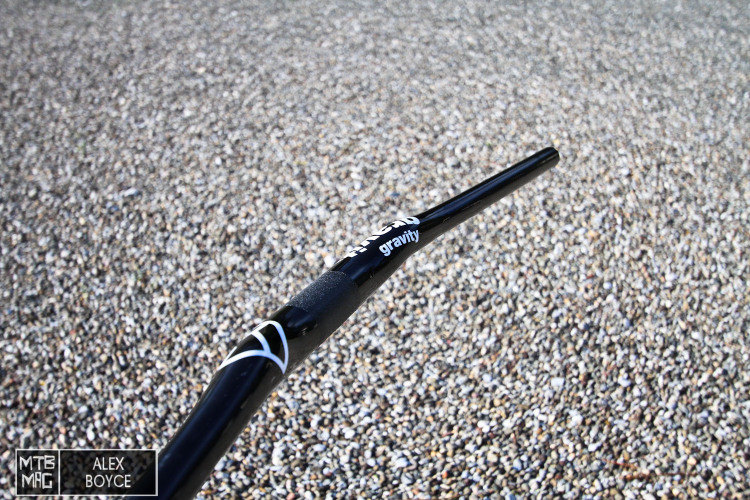 The sweep angle of the aluminium bar. 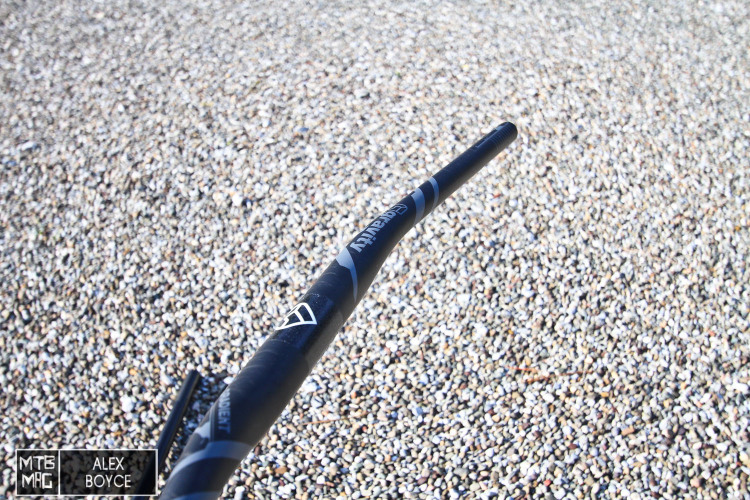 The sweep angle of the carbon bar.

Our idea was to ride the two bars back to back on an Enduro trail in Punta Ala, Tuscany, Italy to see how the different bars compared and if we could see how our riding was over the same rocks and roots and sweeping trails. We choose to ride on trail 301 which was recently used for our large back to back comparative test as it had all the elements necessary to test a bar, including tight turns, rocks, speed sections and jumps. 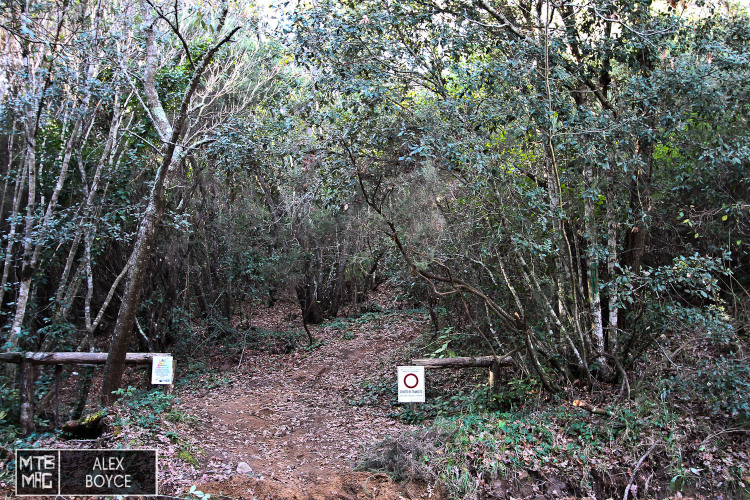 This is where the test ended, the bottom of trail 301, in Punta Ala. One of the rock sections on 301 where we test rode the bars.

We first built up the bike with a the carbon bar utilising a Gravity 50mm stem and new grips, the idea was to keep the test as fair as possible and eliminate any possibility of confusion or false results. We also cut the aluminium bar to the same length as the carbon bar, which was a 740mm width.  Both bars had the same diameter 31mm and the same sweep and rise angles. The bars were installed on the bike with the same brake lever angles and position of the bar relative to the stem.

We did about 4-5 runs swapping out the bars each time to get an idea of what was happening, we pedalled up the hill each time to see how they felt on the ascents. 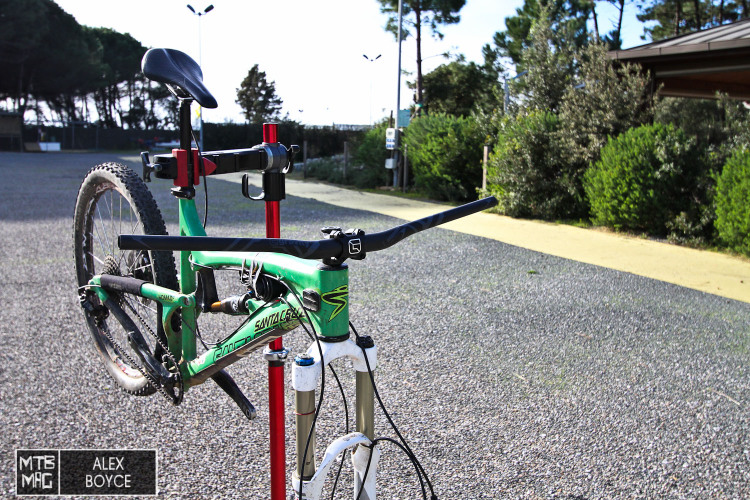 The carbon bar being installed. 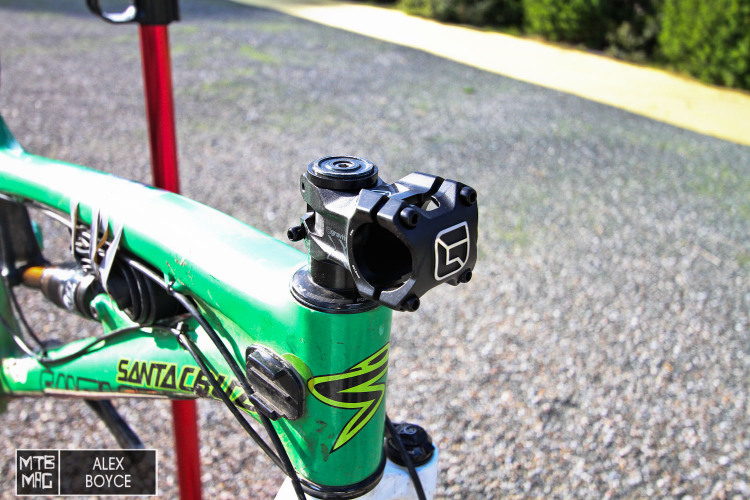 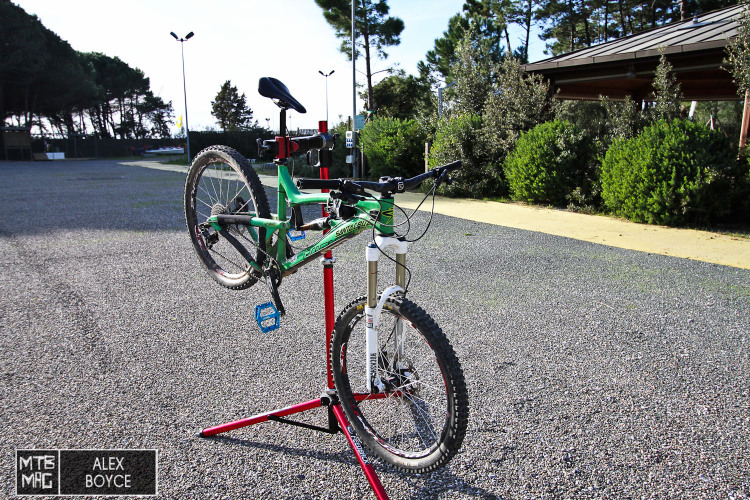 The test bike ready to go with the carbon bar in the paddock area of Punta Ala. The bar set up of the bike with brake angles and grips all set and installed, the hills where we tested are in the back ground. 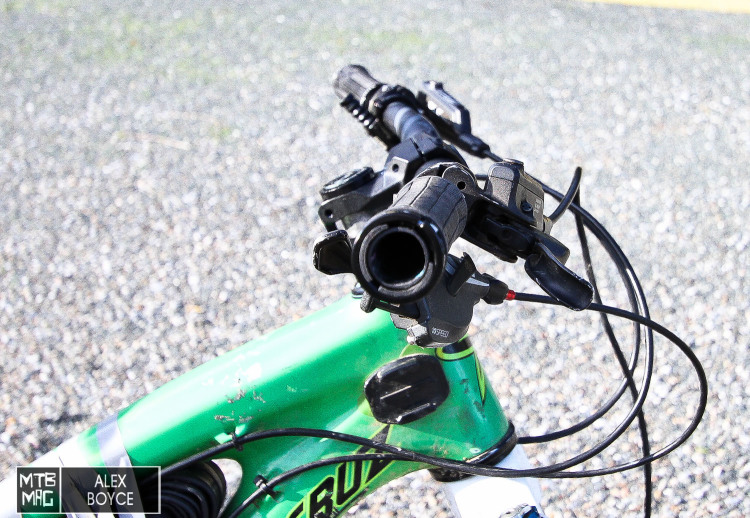 The wall thickness on the carbon bar can be seen before we finished installing the grips.

Testing On The Trails

Riding up on normal trails we felt both bars were as expected, at low speed there is very little difference to feel on the bike, with the same hand positions and widths riding was normal and reactive considering that the width of bar we used was fairly wide and the stem was fairly short.

Descending was where we started to understand the differences. Our first descents with the carbon bar set a baseline of the test, but considering we normally ride with aluminium bars we immediately started to feel a difference. Once we had completed a few runs we then did the same thing with the aluminium bars and we noted the following points.

The aluminium bar was precise but the carbon bar was more precise. The carbon bar felt more direct and felt quicker to do what we intended when we turned the bar. This was especially noticeable in rocky sections and tight switchbacks where the bike came alive more compared to the aluminium. We felt that we could use a narrower bar for the same type of steering response due to the stiffer make up of the bar.

The bike often kicks back and jars when hitting rocks and corners when riding, with the carbon bar installed we felt more feedback from the trail and more of an idea where we were and what we were doing as we rode. We actually felt our riding inputs were utilised better with the carbon bar and after a while made less errors on the trail. In a sense we felt we became a better rider and knew what the front wheel was doing more on the trail.

This is where we felt a huge difference. The carbon bar left us with the feeling of a softer ride and less vibrations back through the bar, which in turn led to a significantly lower amount of fatigue in the arms and hands. The feeling of arm pump was less and we felt like we had greater control on the bike for longer. This surprised us greatly as despite the performance of the aluminium bar being admirable, it felt like the carbon bar really moved on our riding in a short space of time. 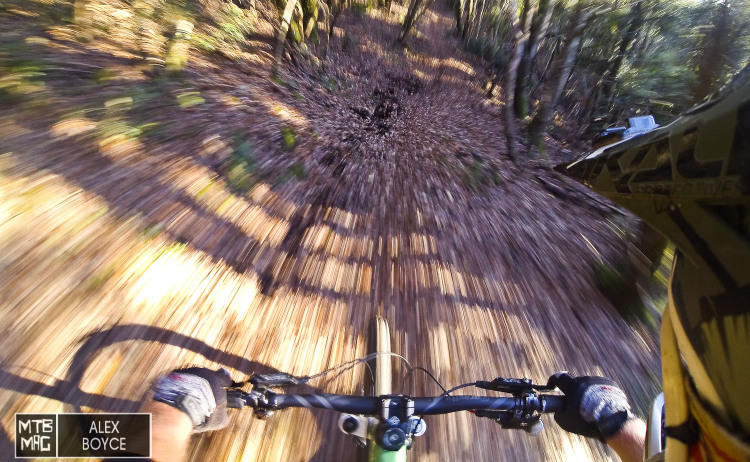 The carbon bar on trail 301 in Punta Ala was a game changer. We felt when we stopped to see how our body was feeling that there was less fatigue in our arms when using the carbon gravity bar.

The construction and layup of the Gravity carbon bar was arrived at over time with lots of feedback from the Gravity test crew and development department. They had a good baseline to start from with their aluminium bar which has great performance characteristics and a really nice sweep and rise. The Gravity carbon bar stands out above the aluminium version as more comfortable and less fatiguing to ride with and a better precision and  response to rider inputs when descending.  We had less arm pump, and honestly felt we didn’t want to go back to aluminium bars after using the carbon version. It surprised us the result. When you add in the lower weight the advantages become even greater.

The only negative we could find was that depending on the market, the price is obviously much higher. So is it worth the price? In our opinion yes, we would always try where possible to spec a carbon bar on our builds after this experience, especially if you are a rider that like long rides and wants that extra performance factor on descents that in the end leads to us all having more fun on the bike.