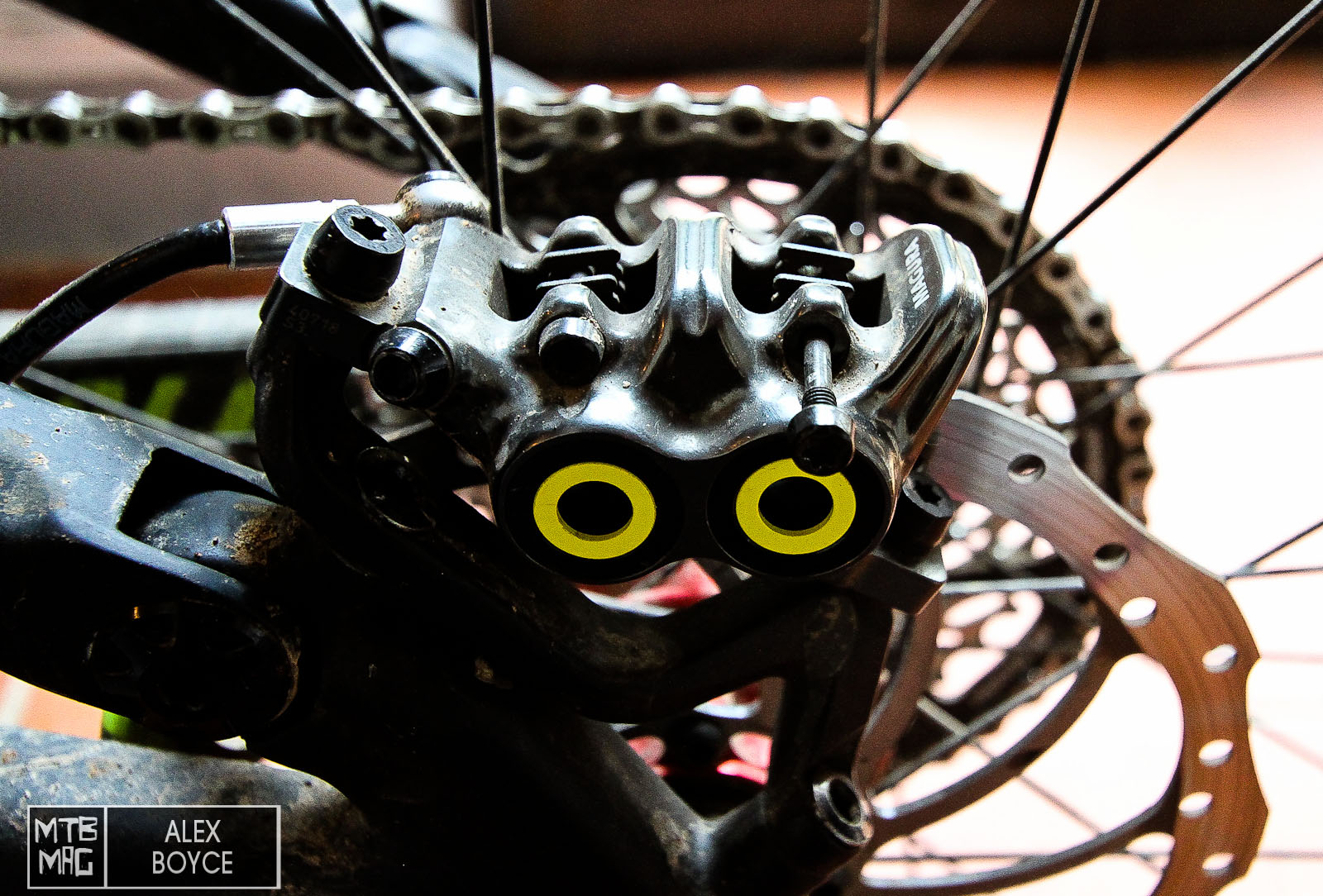 Magura have been one of the smaller names in the Enduro bike brake market recently, but considering they first brought hydraulic brakes to the mtb world with their hydraulic rim brakes back in the 1990’s , we thought it would be good to revisit their latest offering which on paper looks ideal for Enduro and see what they have been up to.

We have had mounted a pair of MT7 4 piston callipers for the last few months and have ridden them pretty much everywhere we could. Our main testing location, Punta Ala in Tuscany, has provided us with some ideal tracks from which we have tested the brakes over a longer period of time. Particularly Rock-OH, which we have always found is a great place to see if brakes can really stop you. 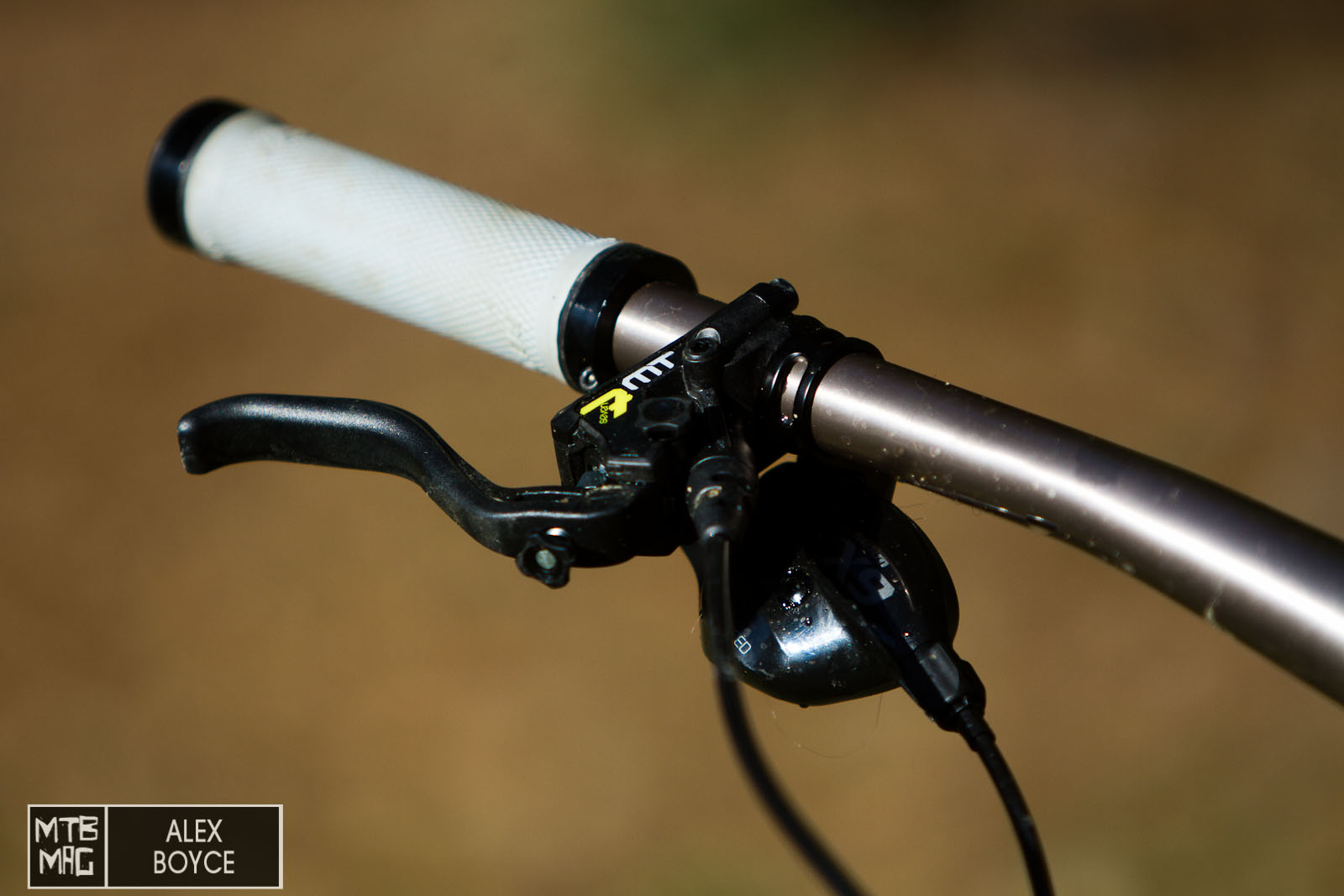 The MT7 from Magura.

“The MT7 stands for maximum braking performance and stability in extreme conditions. In the tough, bike-testing worlds of Enduro and Downhill, the additional braking power of the 4 brake pistons is a positive safety factor. The aluminium, two-finger brake lever – with toolless adjustment – and the adjustable bite point provide the necessary ergonomics for perfect brake control, even in difficult terrain and on long downhill runs.”

In raw features this tells us that they are light, powerful and resistant, their spec sheets suggest a weight of 375g, with 160mm disc. We measured this and came up within a few grams. In the hand the levers feel very light and the callipers purposeful with their material choices. The other features they list are all present, interestingly the callipers use four separate brake pads rather than the standard two, a design teen over from their motorcycle range. The MT7 has a cylinder per pad, this is to improve heat management when braking.

Magura lists these as their main features: 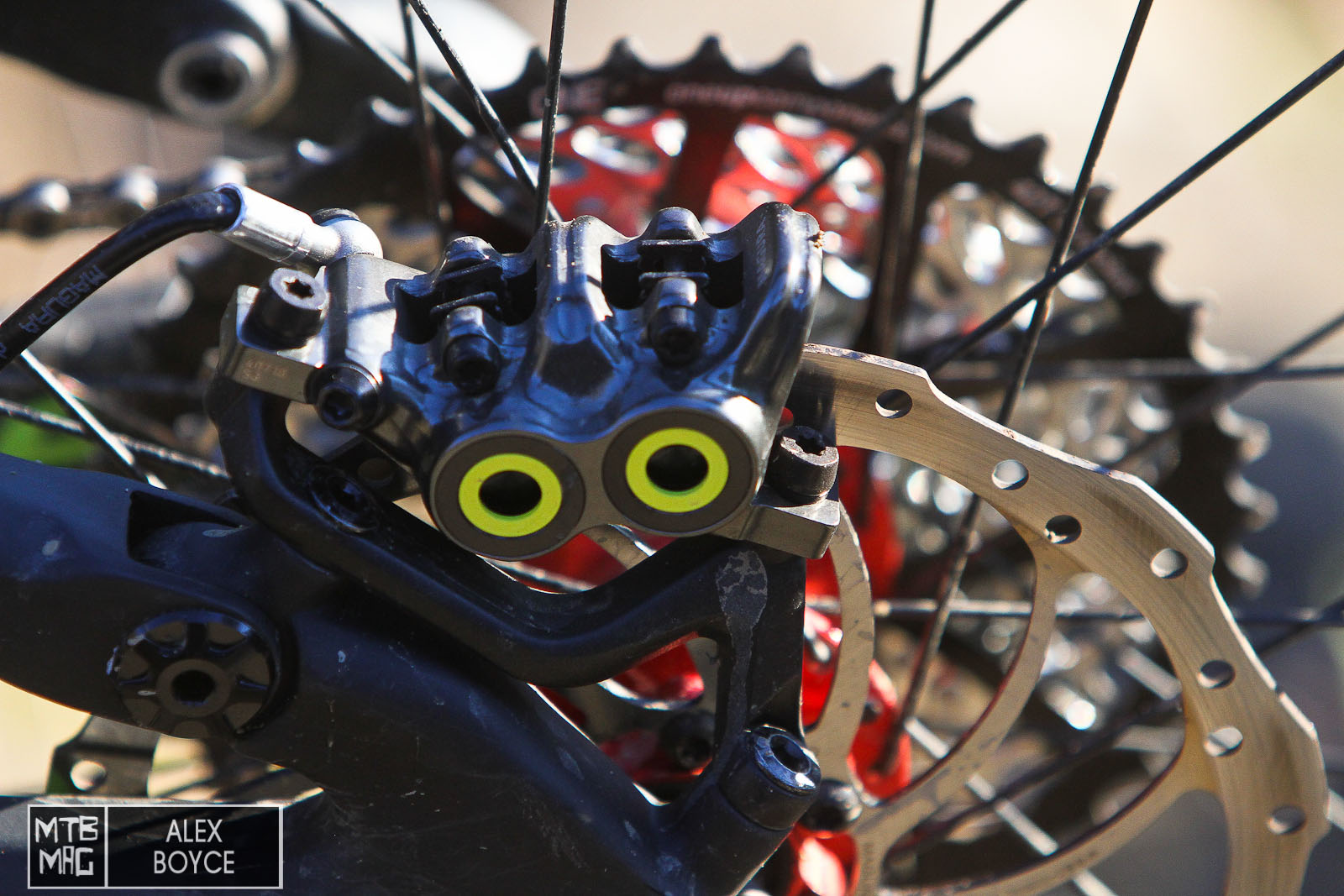 The calliper was easy to set up and switch pads out.

We have spent a lot of time with different levers over the years and Magura have provided a very low profile set of levers that at first glance we did not know what to expect. The weight in the hand when mounting was incredibly light, their material Carbotecture obviously has something to do with this. Mounting the levers on the bars was easy and the low profile design meant their was plenty of room for adjustment with our SRAM gear shifters and Fox seat post control. Magura even provide an after market Sram compatible accessory (shift mix E for being able to fit gear shifters to their levers, reducing further the profile of the control system on the bars).

The levers and the master cylinders are made in such a way as being flip-able so can be run both sides, easy if you need to flip the brakes over for a non moto-style of brake positioning if swapping riders frequently.  There are two main adjustments on the levers the bite point adjuster and the reach adjuster. Both are fairly self explanatory. We set the reach fairly close to the bar, which is our preference, and left the bite point adjusters alone after trying them in different positions: we preferred the mid point of adjustment.

The levers themselves were comfortable to grip and had a responsive positive feel to them, we mostly ride with one finger control but the levers are large enough to enable two finger control. We were essentially able to set them up the same as our previous Shimano ZEE set-up, and this meant we had a really good idea of what we were testing. Finally the levers seem tough and in our testing period we did not break anything despite a few falls and general trail wear and tear. 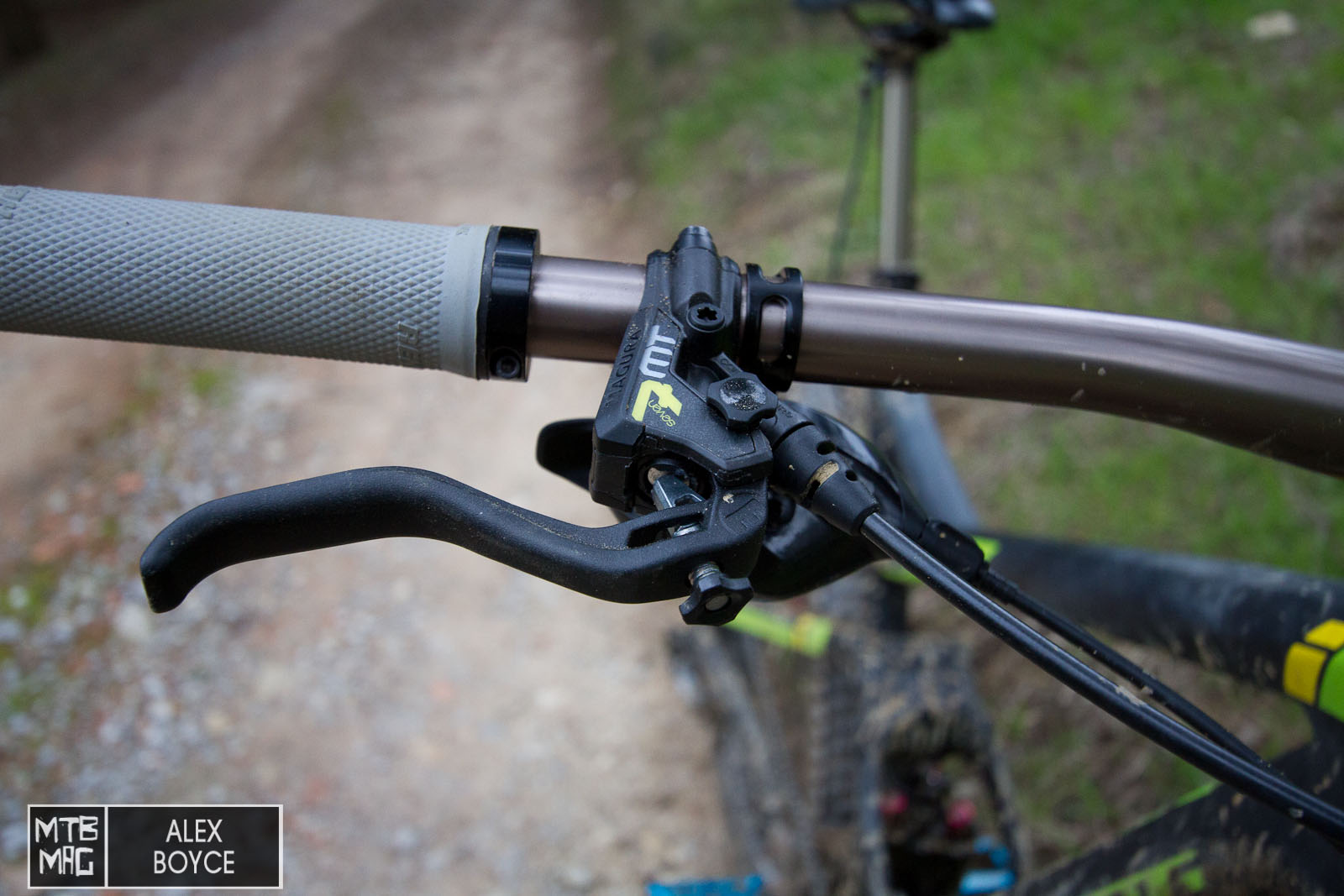 The lever with its various adjustment knobs.

At the other end of the brake hose is the calliper which in this case are a 4 piston aluminium forged floating design. The pads in the calliper are small and individual. They are easy to remove if you remove the bolt and pop them out. We found their longevity excellent, despite over braking at times to see how the MT7 responded. The callipers are a once piece design and have a distinctive look to them. When shipped we needed to adjust the hose angle for fitting to the bike, this proved very easy.

The cylinders and sealing features looked high quality and over the time they were on our bike we have experienced flawless performance from a materials point of view. 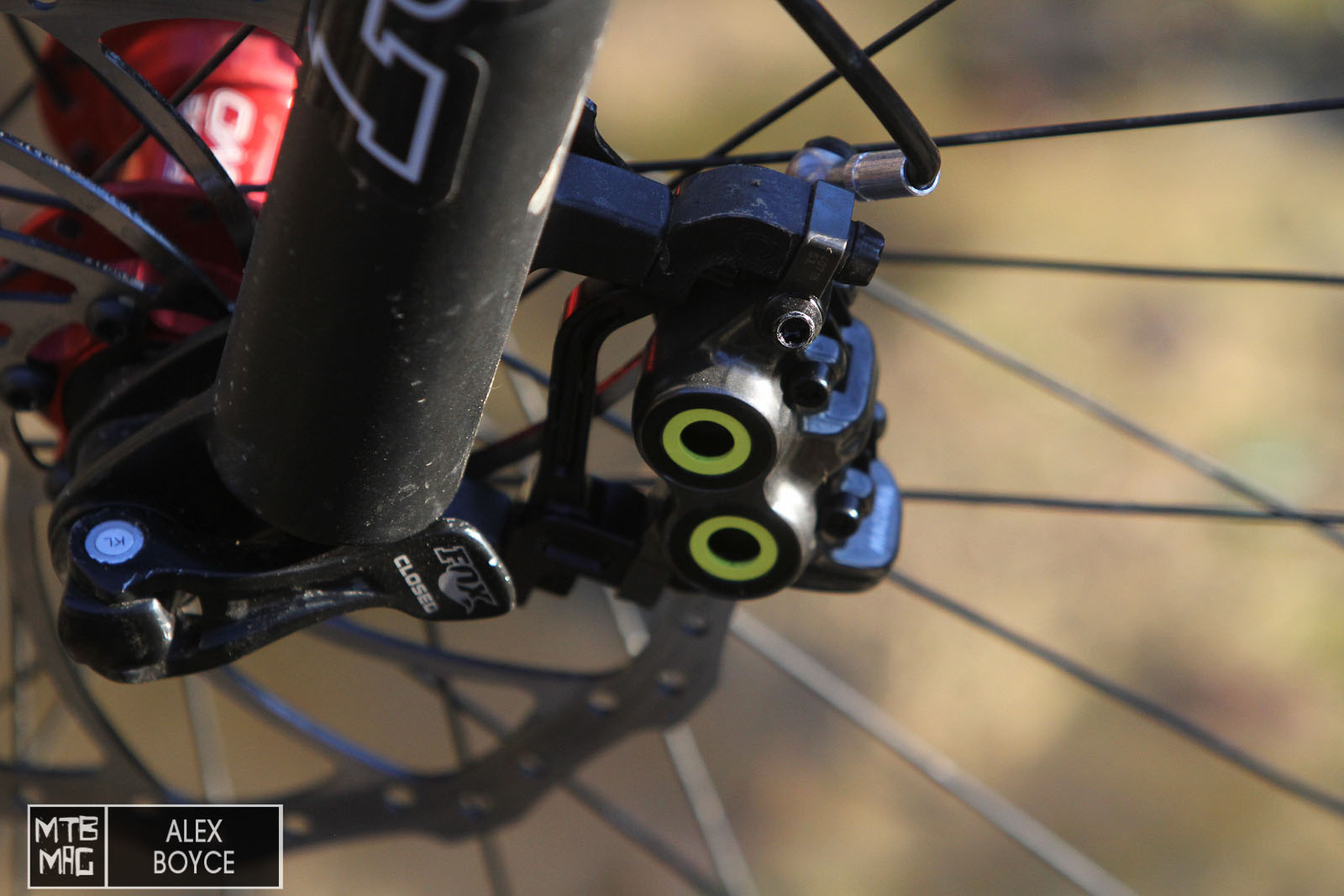 The Caliper during set up, it was also easy to adjust the brake hose angle.

One of the easiest pad removal that we have ever done. Undo the bolt. The pads are small and without springs, removed with the wheel still in place with a pair of light pliers, reinsertion was simple. 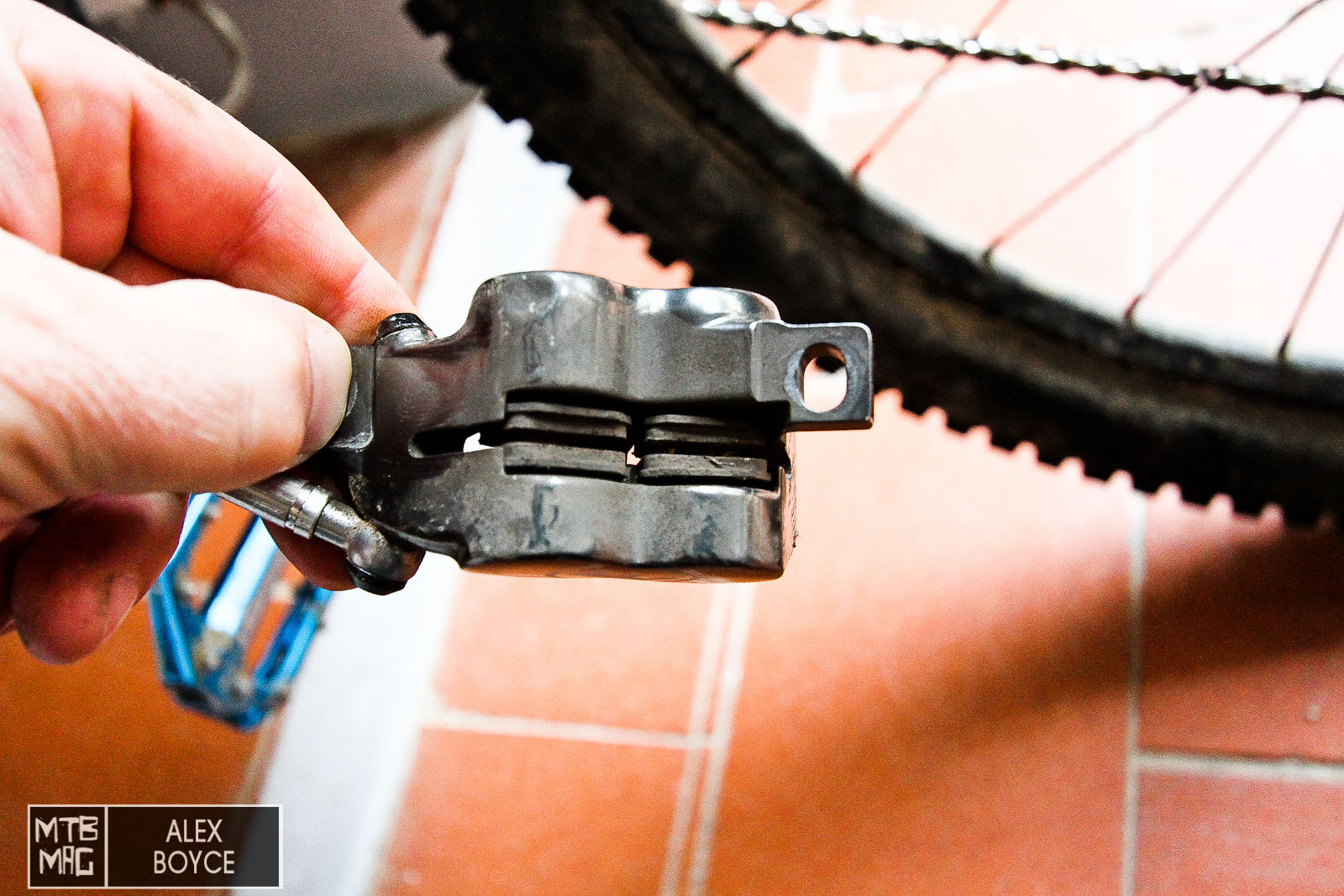 Despite four pads wear is even front and back, left right though shows calliper could be positioned better on mounts.

We mounted the Magura (steel) discs with a 180mm on the back and a 203mm on the front. We used the six bolt pattern, although we also understand there is a centerlock adapter as well. We found the discs ran true and straight the whole time we had them on with no warping or scoring. The discs at no point started squealing with the brakes. The discs are not a sandwich technology like the Shimano we had on before, but we found their performance to be right on what we would expect from a main brand producer. They remained in good shape over time as well with no excessive wear noted. Running in wet or dry conditions we noted no significant noise. In fact they have been so far one of the quietest set brakes we have had mounted on our bikes in the last few years. 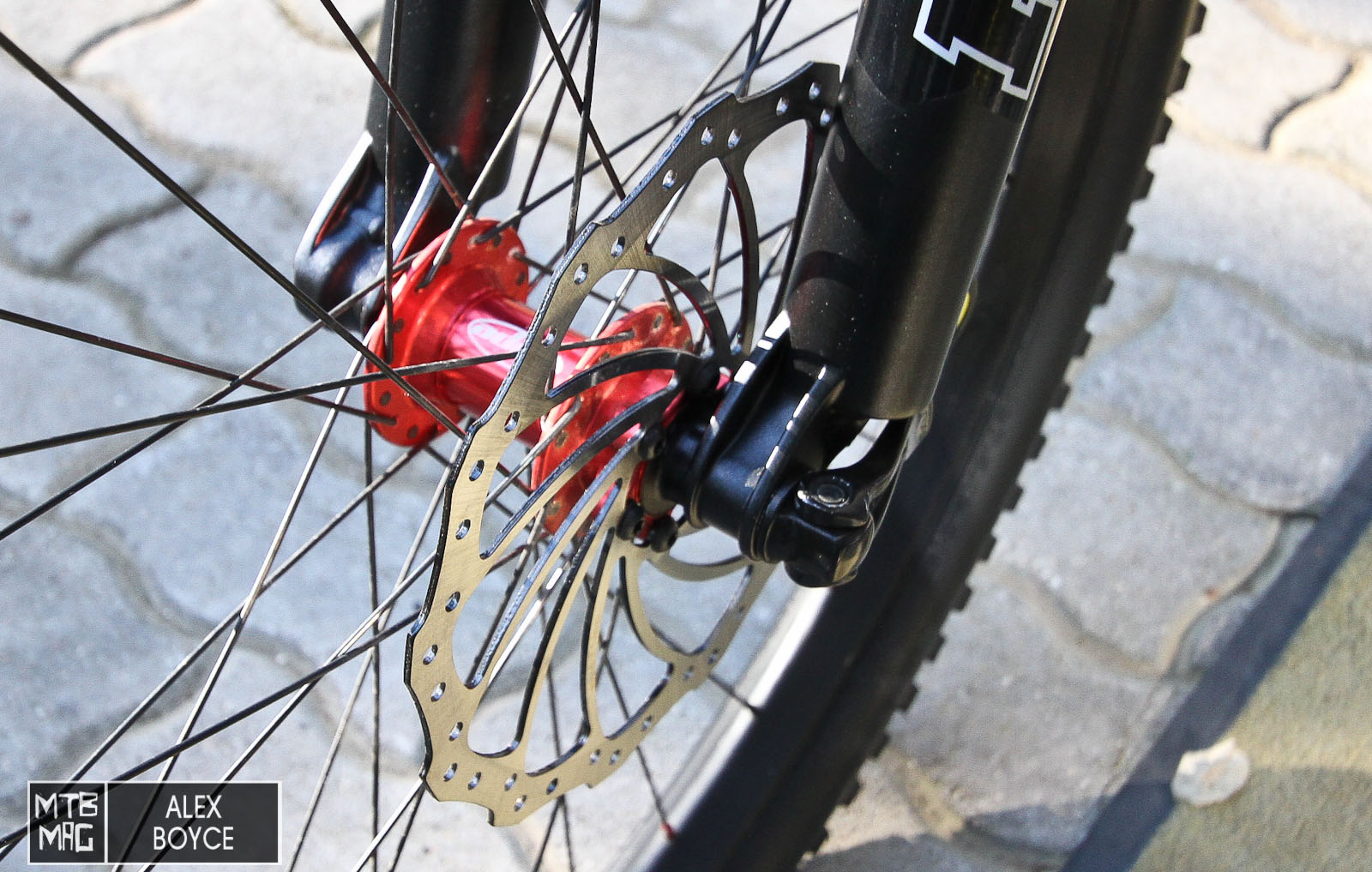 The discs were high quality and stayed true and wore well over our test period. 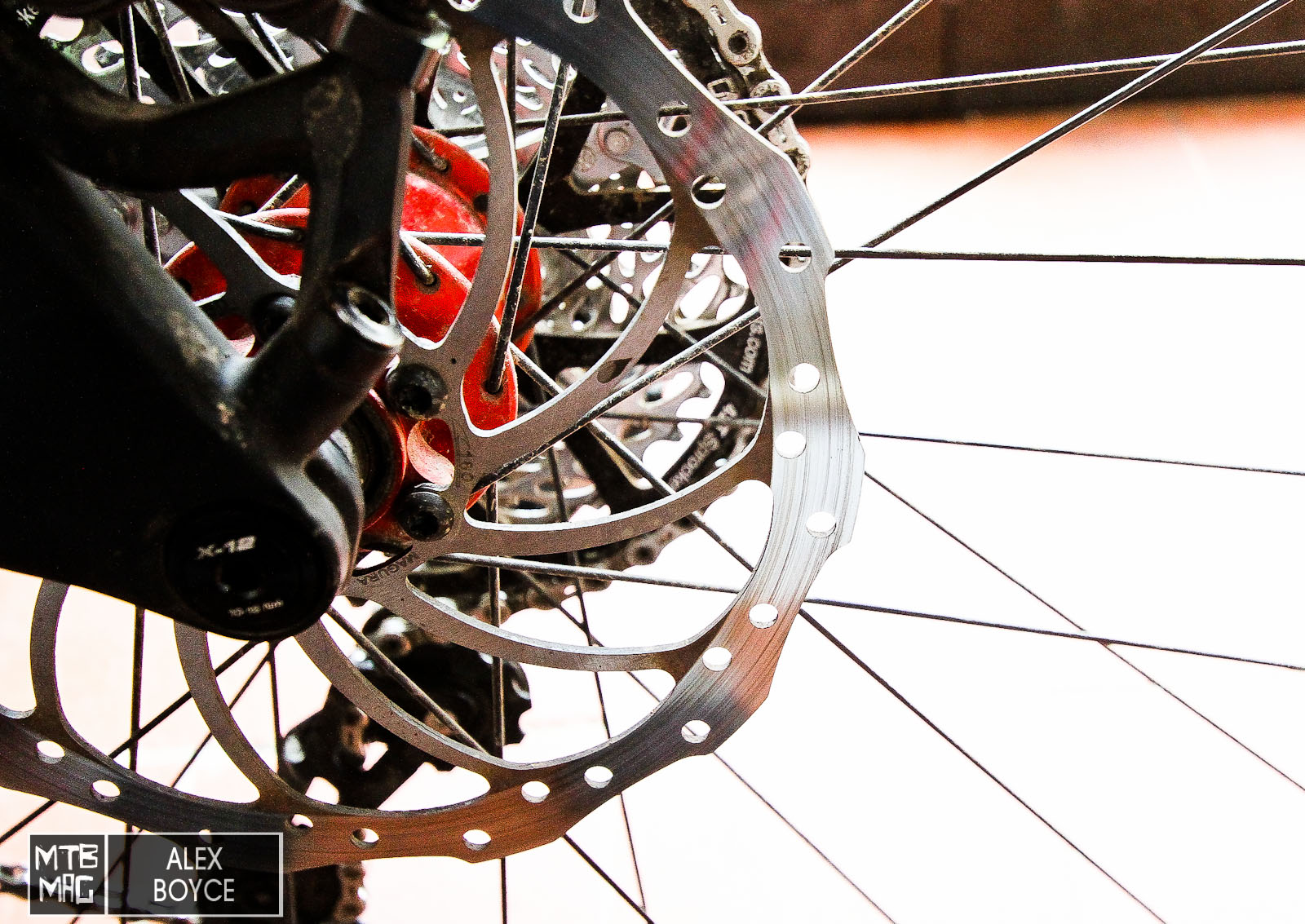 Out of the box the MT7 went on with no problems and we were up and running immediately with a quick bleed after shortening the brake hoses. The callipers were centred easily on the discs and the brake pads bedded in quickly giving us maximum braking performance. We were able to adjust the brake hose angle easily on the calliper for optimum cable runs. We set the lever reach and bite point then did not touch anything for a very long while. We noted that when wheels are removed the brakes are very sensitive to being touched and pads can be too close together making it harder to put the wheel back on. Avoid touching levers and or use the pad spacers/spreaders.

The MT7 use Magura’s Royal Blood mineral oil and have their so named “Easy Bleed system.” We only bled the brakes on set-up after having to shorten hoses. The process was almost as easy as Shimano, but did require two syringes and a few minutes to expel any air. Over time we did not feel at any point we needed to re-bleed them, despite some very long braking runs. The system seems to hold up very well. Total bleed time was about 10 minutes, we don’t think though that it is something that will need doing very often. Here you can see the bleed screw and lever position adjuster mechanism. 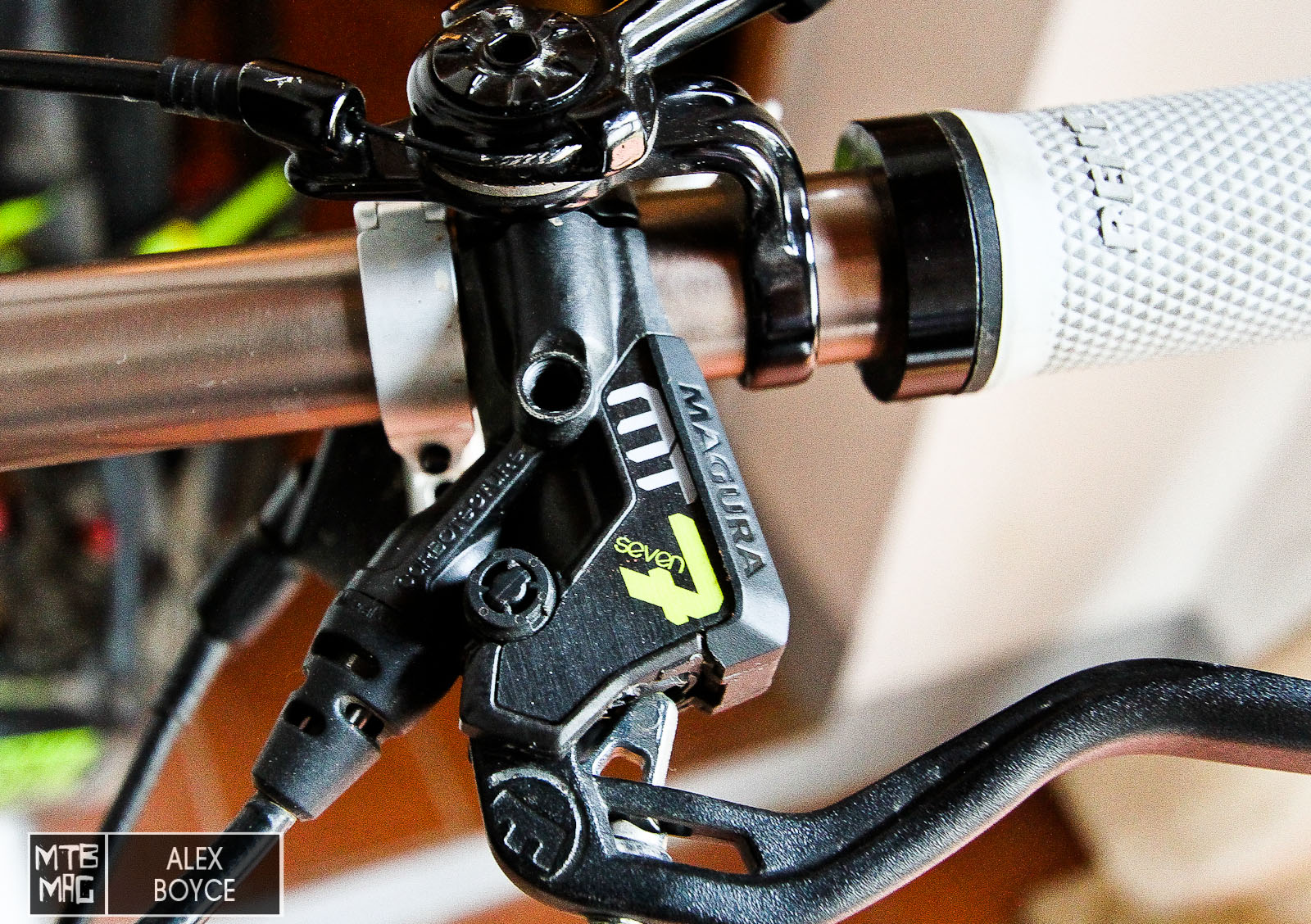 The Bleed screw is bigger than a t-10 standard. 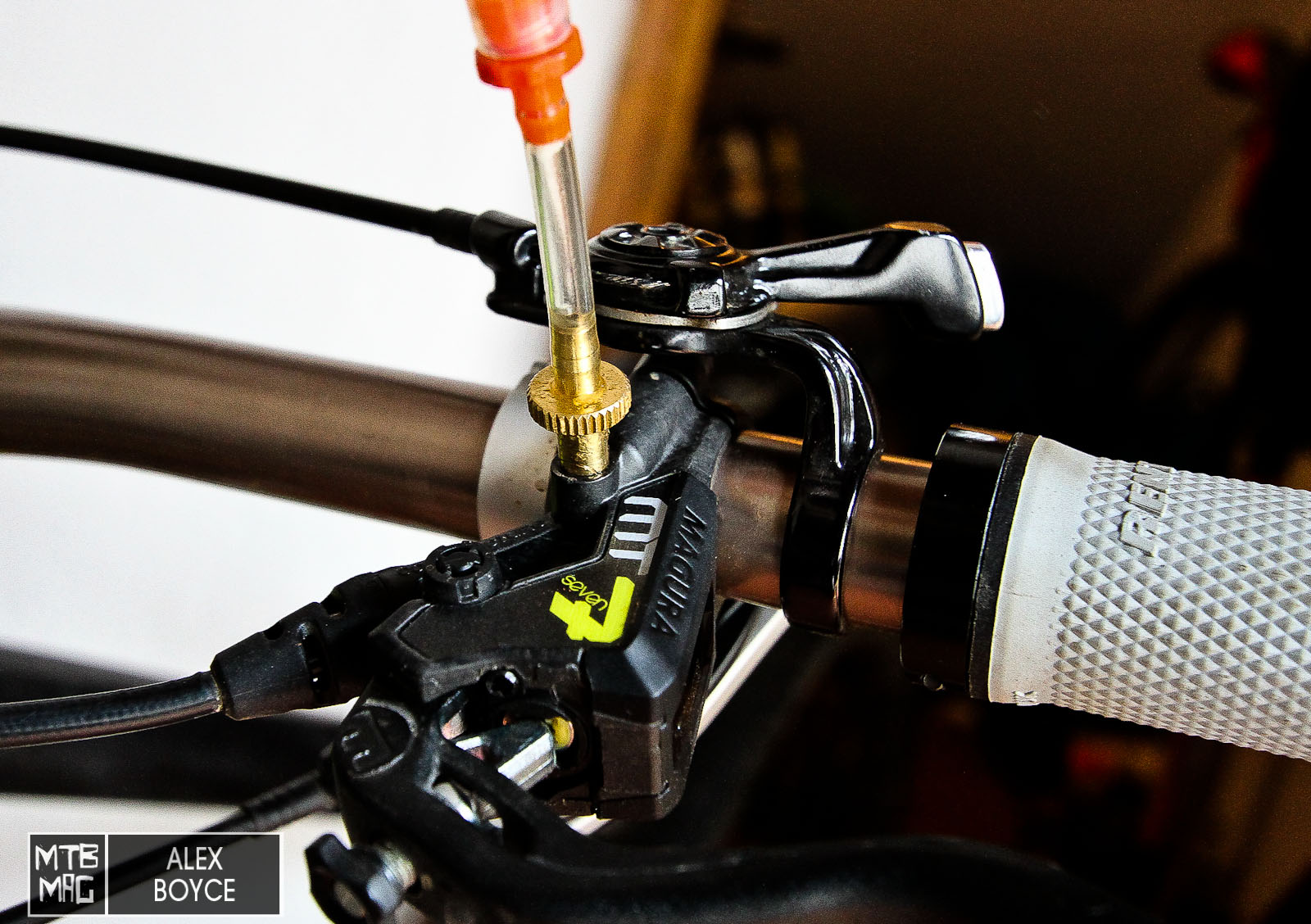 Bleed is simple and requires one syringe only to remove the air that was present in the system.

Initially after first setup we started to get used the feel of the brakes and they bedded in quickly. We tested the first few times on Rock-Oh and gave them good working over. Our initial impressions left us somewhat positively surprised. We have to say at this point that our baseline for brakes are Shimano Zee with an Ice tech set-up. A very powerful brake system that we know well. Throwing a bike with these brakes on was going to be a learning curve, until we realised very quickly that the feel of the Magura brakes was very similar to what we were used to.

We found the feeling to be positive with good feedback to our hands knowing that the pads were in contact. This initial stroke and then the moment of movement onwards is called modulation or (controllability). In this sense we found the modulation to be very good. No on/off feeling, once the pads were in contact we could feel how our additional finger force was turned into positive braking energy again, no brick/solid feeling in the lever.

The braking on the trails we were riding in Punta Ala at speed required significant brake inputs to control the bike on the trails. We felt that with the MT7 we didn’t really think about braking: we just braked. What we call, “brake and forget,”  we pretty much know that these components are a positive contribution to our time on the bike. The feeling in the levers remained constant and consistent, all through our test runs. As brakes heated up the brake’s performance remained good. We ever once felt we were about to over heat our brakes.

The more time we spent on the brakes over the testing period, the more we liked and trusted the MT7. We felt that compared to what we had ridden before we had a winning brake in our hands. The four piston power is noticeable and appreciated. The brakes did not fade in our hands, even after dragging them for a long time.

The wear of the 4 pads was even which is because the pads are all pulled onto the disc at the same time, not just the front part of the disc. We found that scrubbing the brakes as one descends did not change the lever feeling significantly at all as they heated up. Based on this we felt that the brakes were never in need of a bleed.  We would say that compared to Shimano one of our gold standards of brakes the MT7 lever feeling is a bit softer on the bite, but power-wise as similar as we could judge it to be. This is fairly significant as we have always failed to find brakes that meet our expectations. Here we have a pair of brakes that meet them. 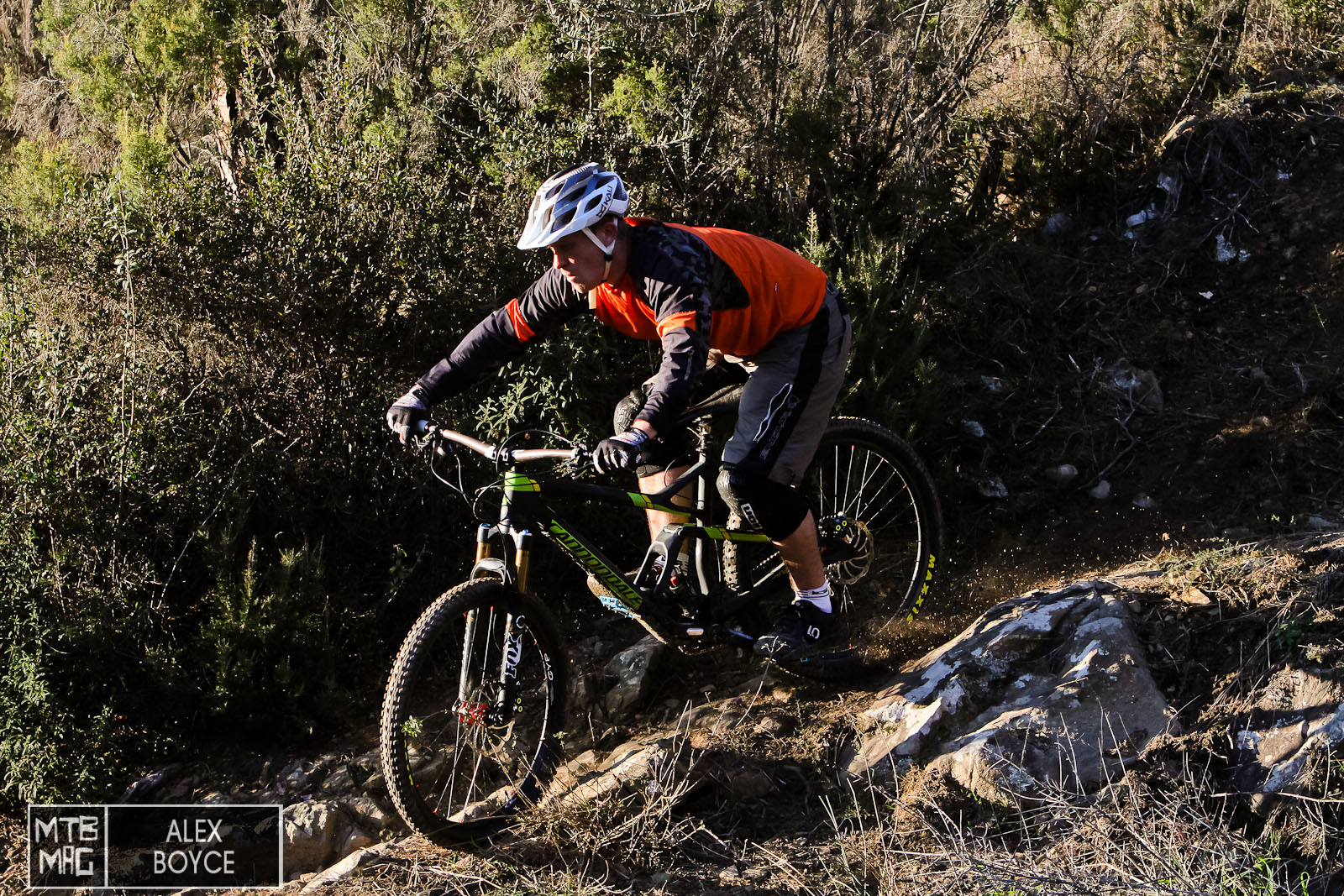 We rode many trails including the trails of Punta Ala specifically Rock Oh which really tests brakes to their limit.

We were actually surprised to how good the Magura MT7 were on the trail and in descents: we were never surprised or taken aback by what was happening when we called on them to do their duty, their performance was reliable at all times in our test period. We managed to push them really hard at times and we were satisfied with their response in all situations. Add in the need for a consistent feeling and certainty that a good brake gives you and we feel that the MT7 met these requirements. Setting them up is easy, the brakes run quietly and the weight is competitive for Trail and Enduro bikes.

Magura have done an excellent job with these brakes and anyone who wants power and control can rest assured that’s what they will get.