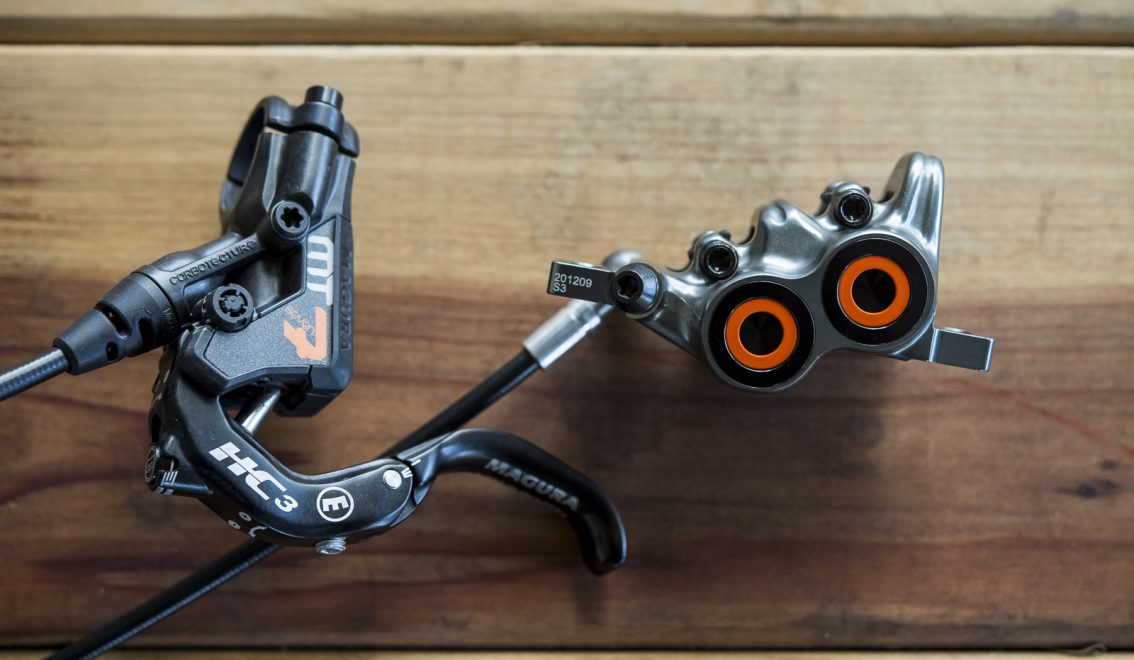 It’s been quite a few years since the last time I’ve ridden brakes from Magura extensively. More frequently over the last couple years I have been hearing quite broadly that their latest offerings have been very, very good. A few months ago Magura was kind enough to send out a sample of their MT7 brakes with the ultra adjustable HC3 lever – which are built with Danny MacAskill’s input at the forefront of their design. Duty wise, these brakes would fall in the same range as a SRAM Code or a Shimano XT – roughly covering everything from All Mountain to Downhill racing. Here’s how they’ve been working out… 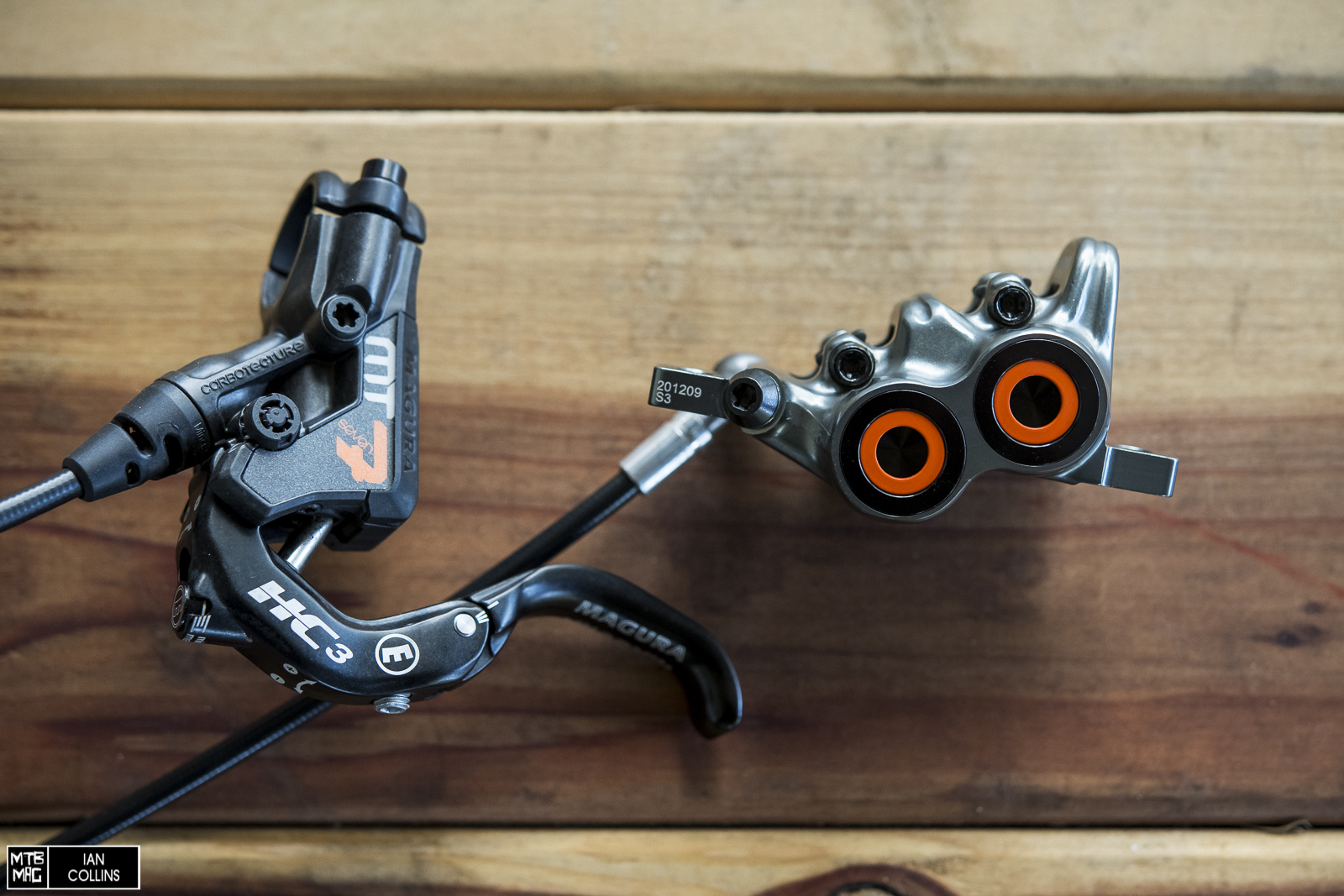 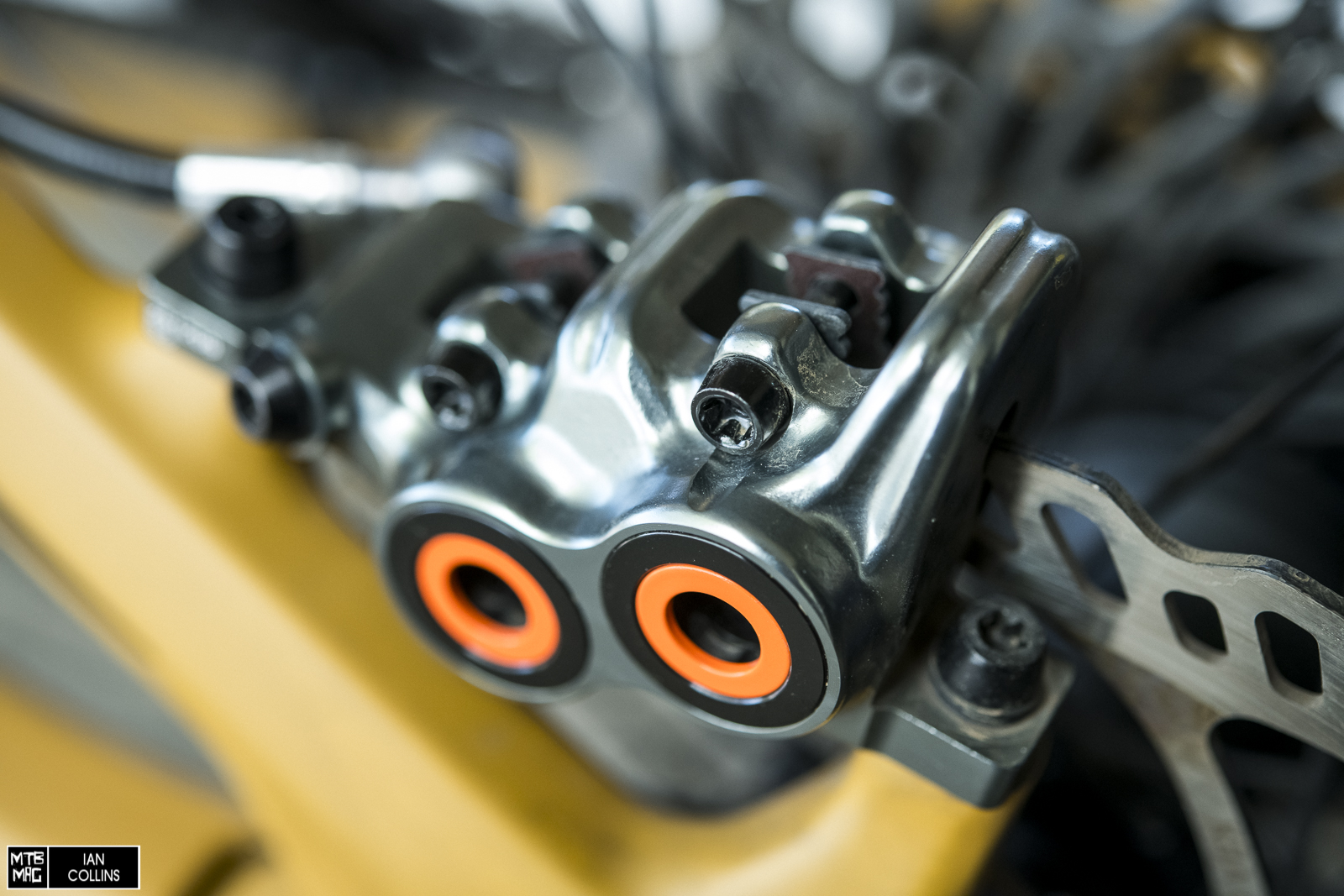 Starting with the caliper, an interesting facet of the MT7 is that it utilizes a one piece caliper. Most brakes on the market use a two piece caliper with each half bolted together. A single piece caliper is more robust and better resists flexing, and is substantially more expensive to manufacture. 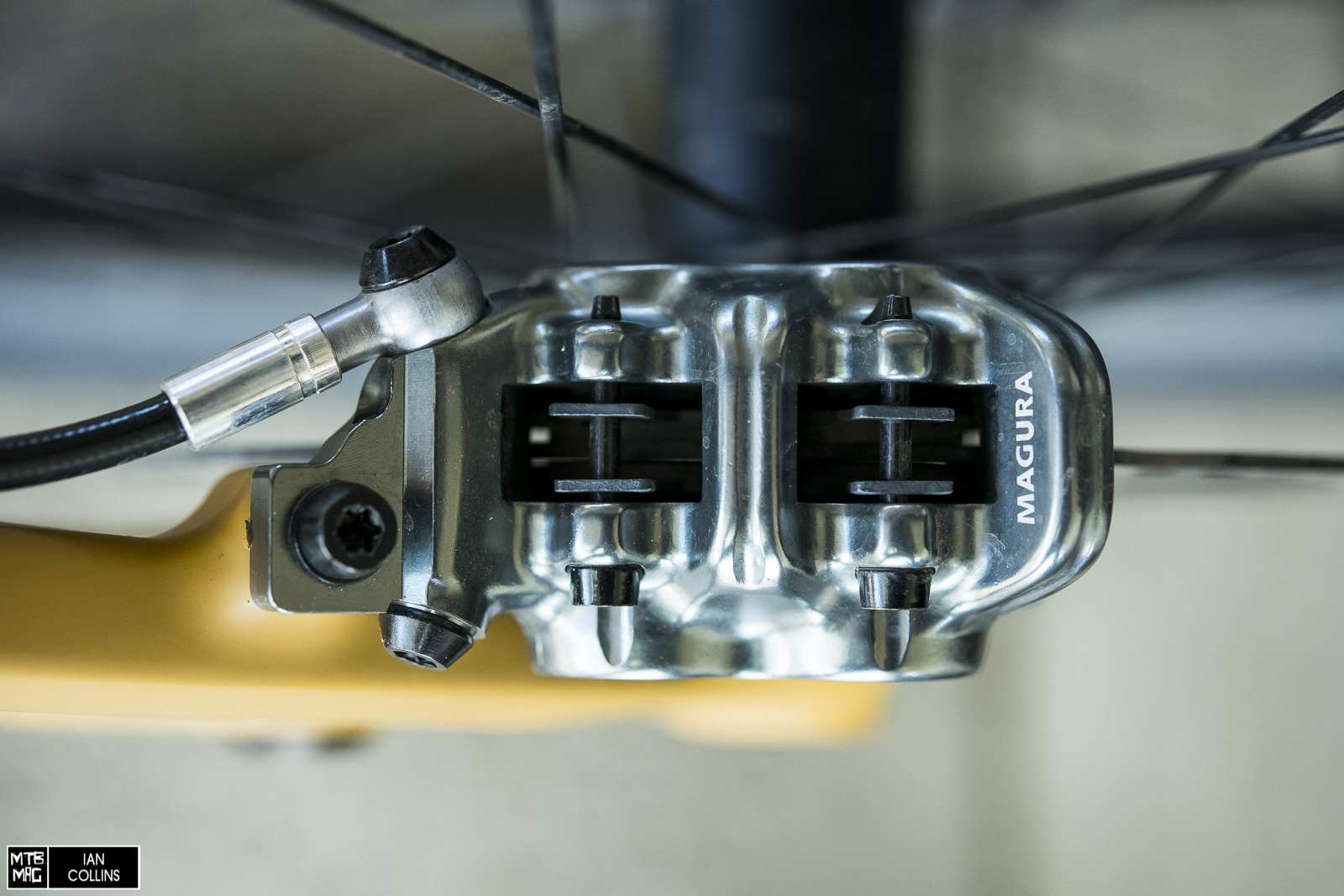 Adding further to the burly nature of the caliper is its “triple arch” design. As you can see above, there are 3 generous sections of material which cross over the top of the caliper to increase structural rigidity. Also note: the pad set is comprised of four individual pads, as opposed to two, like most four piston brakes on the market. Magura claims that splitting up the surface area helps with heat management. 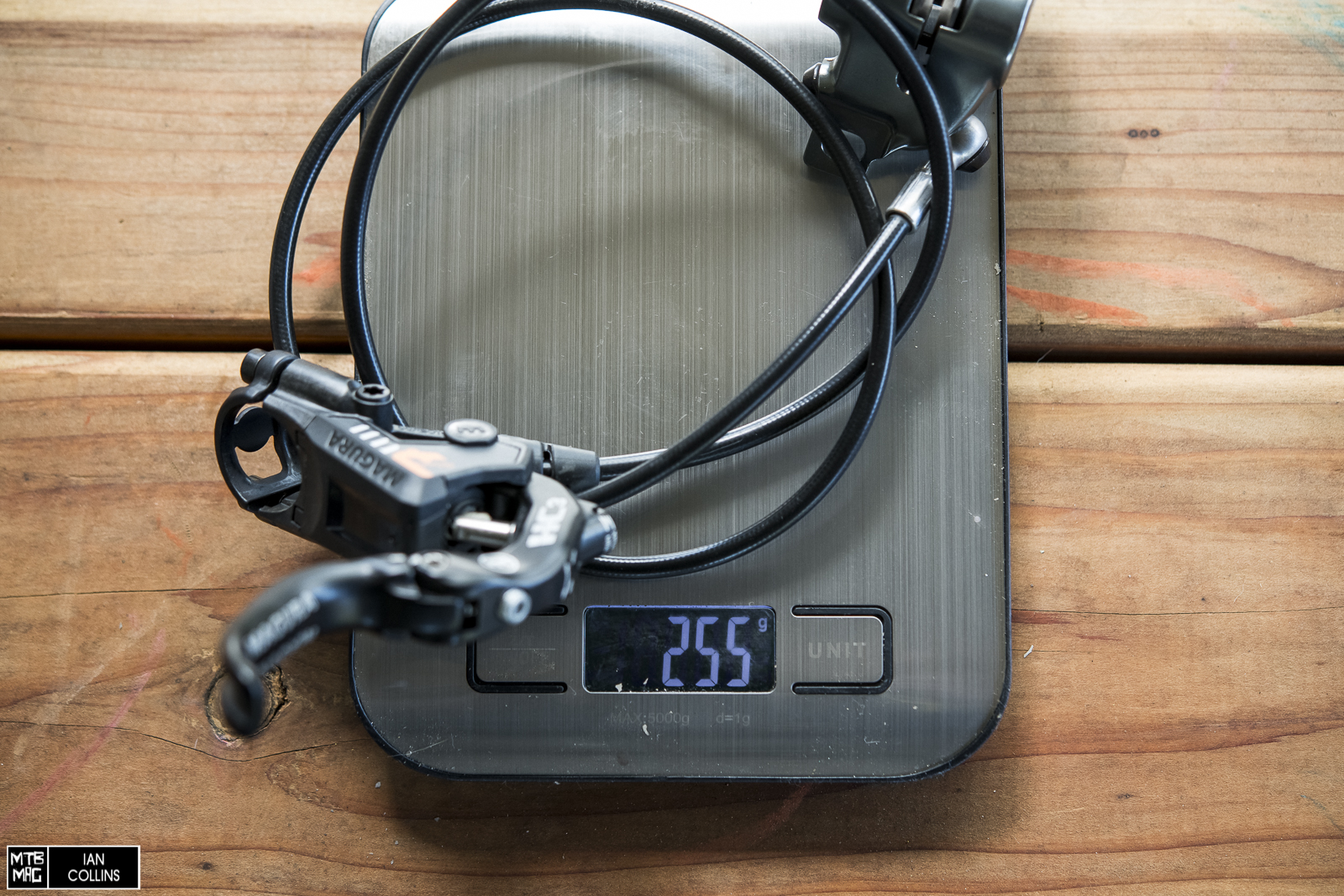 The MT7 HC3 came in at 255 grams for the front brake – a weight that’s quite impressive for such an aggressive offering. 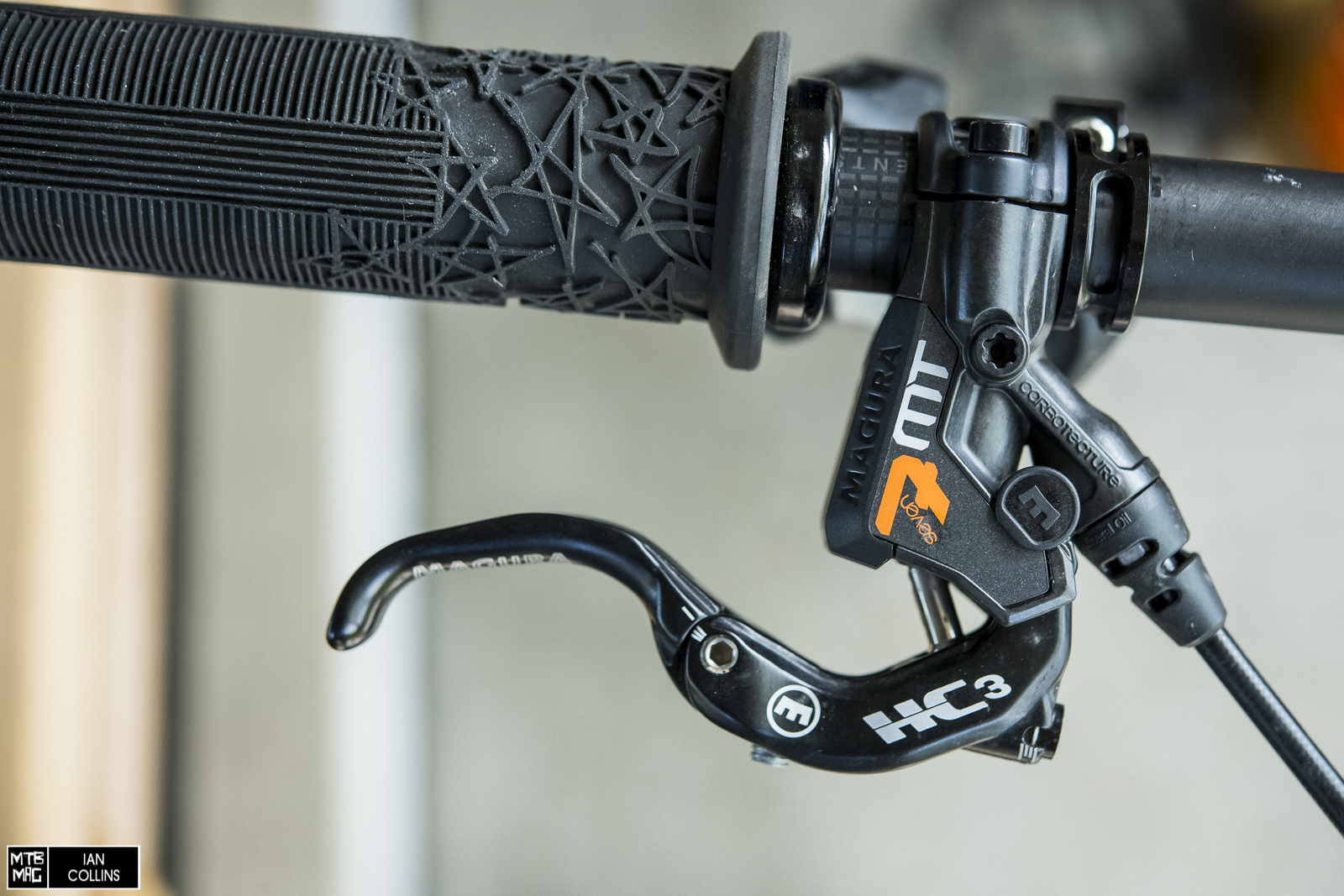 One aspect that really stands out with Magura brake levers is their radial master cylinder. Above the HC3 graphic on the lever blade, you can see the rod which compresses the master cylinder. Notice that it runs nearly perpendicular to the handlebar, as opposed to running parallel, like most popular designs. They can be switched on the handlebar from left to right without having to bleed and swap hoses. 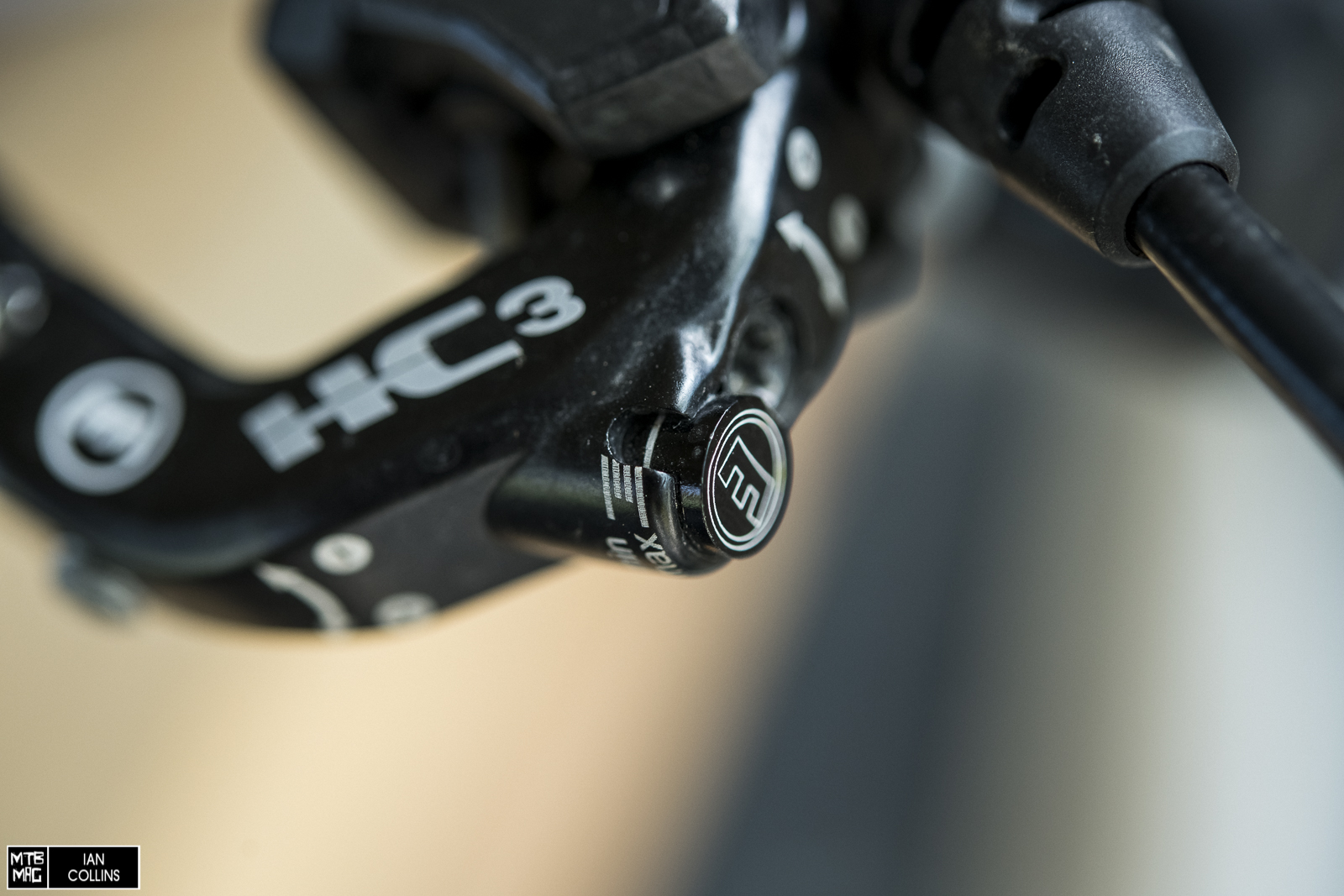 The above adjustment gives you some fine tuning over power:modulation. Using a T25 Torx, you can dial in or out where the rod depresses the master cylinder. That placement effects how much leverage, and thus power, the lever has over the MC. 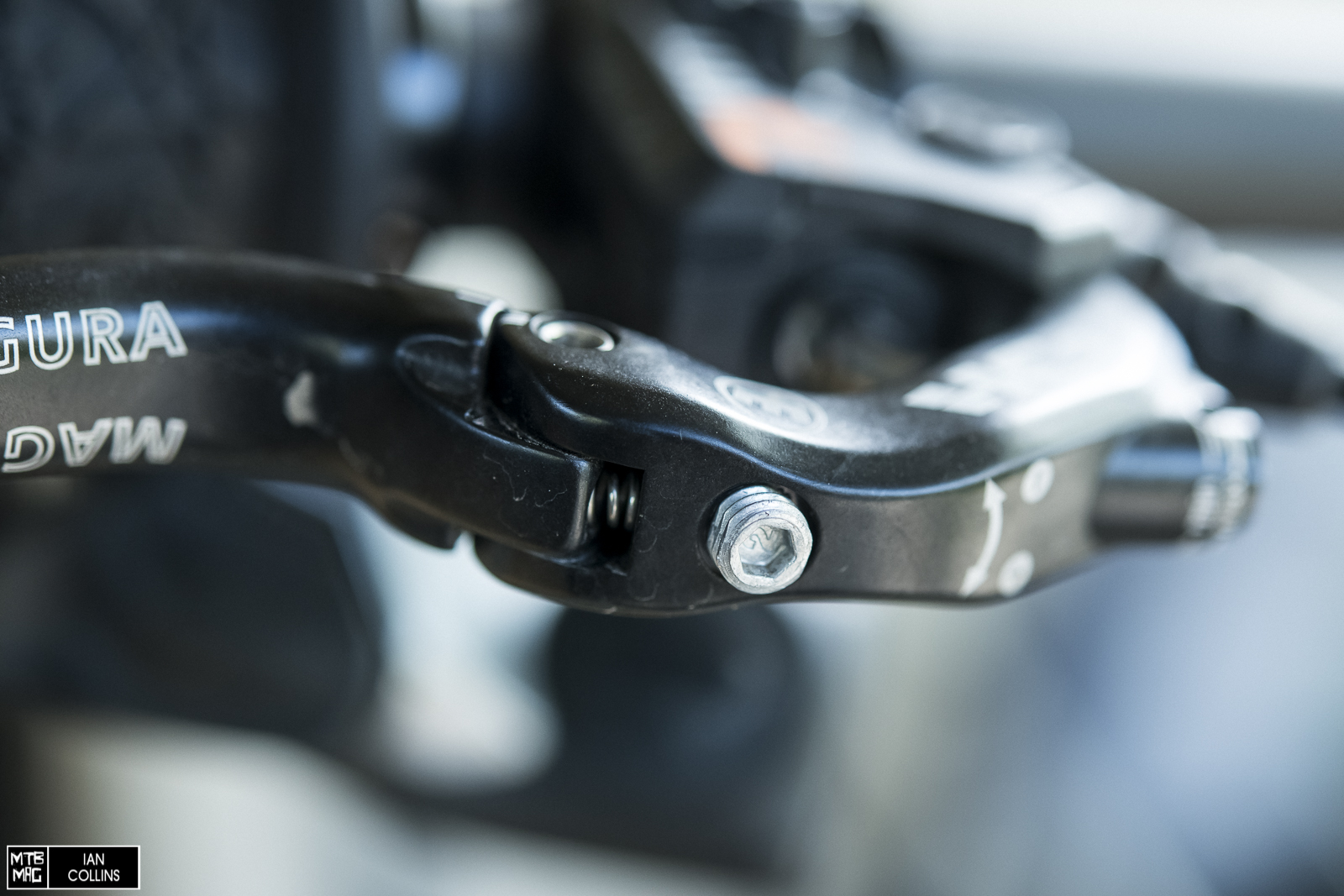 The grub screw shown above is what determines your lever’s starting point/reach. 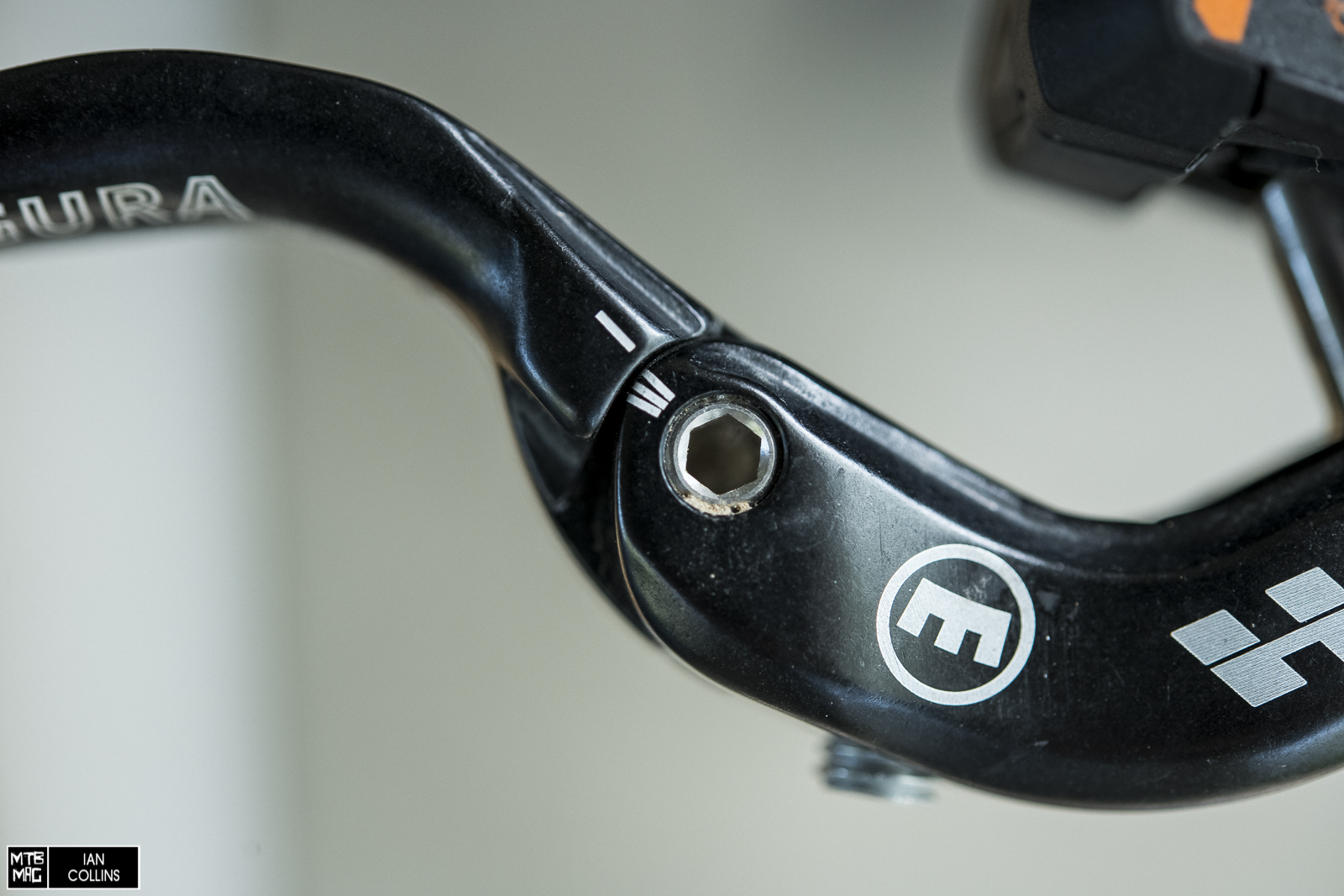 The indicator above shows you roughly how far in or out your lever is.

As far as setup goes, the brakes arrive pre-bled with full length 2,200mm hoses. Trimming them and doing a “quick bleed” is a snap, as is with most brakes these days. Although I’ve yet to need to do a full bleed, Magura has improved and simplified the process dramatically – gone are the days that they are known for being on the finicky side. Overall, the MTB brake field seems to be pretty mixed as regards the choice between mineral oil and DOT, but Magura remains committed to their in-house mineral formula. I opted for a 203mm front and 180mm rear rotor combination in their Storm HC rotors, which, it’s worth noting that at $37 USD each, they come in at a darn good price compared to other manufacturers. Magura also make a MDR-P rotor, which is more stout and features an aluminum spider. I haven’t tested them, but they come in at the $75 mark and offer improved heat dissipation and a 220mm sized option, so they sound like a great DH racing or e-bike option. 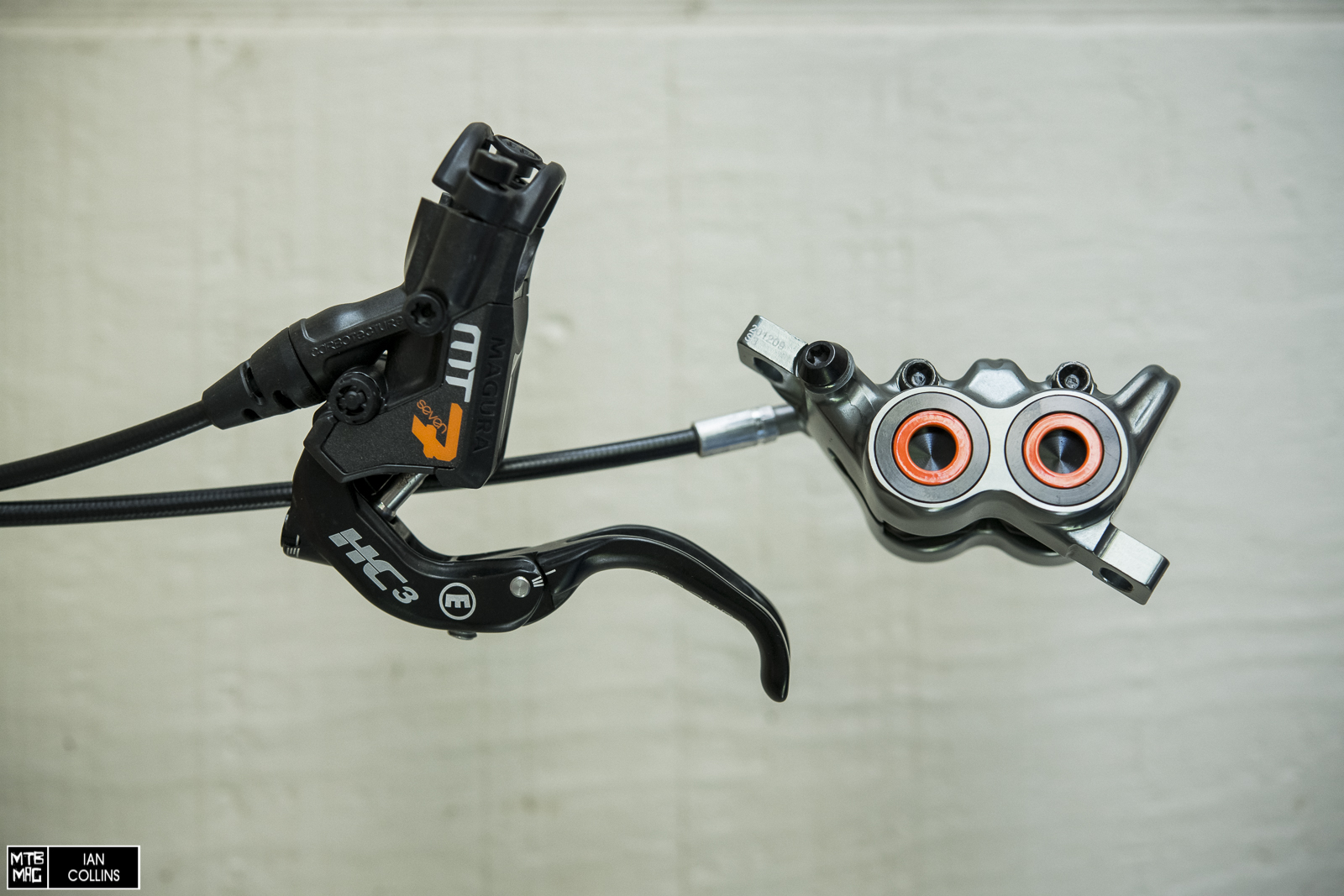 Out of the gate I immediately realized that these brakes have no shortage of raw power, whatsoever. For the first time since I’ve been riding big wheeled bikes, I actually considered dropping down to a 180mm front rotor on my long travel 29″ bike. For what it’s worth, this comes at a time that I’ve been pondering a 220mm front rotor on a competitor’s brake. Anyhow, I’m a bit picky about my cockpit setup, so personally I loved having all the lever adjustments. With that in mind, I did not notice much of a difference in power delivery between either of the extreme ends of the “leverage ratio” adjustment. I expected one end to tilt toward softer modulation and the other end to feel more hard hitting. In reality the brakes simply bit hard no matter what, although I never found them to feel too abrupt on trail. On the topic of levers and modulation, it’s worth noting that these brakes are available with a slew of different levers. I loved the shape and hook on the HC3 lever option, but you can save yourself about $60 per wheel by opting for the MT7 Pro, which uses a standard HC1 blade that’s aluminum and offers a single tool free reach adjust. As an off the cuff observation, I’ve ridden the MT7 with Magura’s composite lever and found them to offer what is almost a softer feel, due to the increased lever flex. I haven’t spent much time on them, but they could be the right call for riders looking for less of an on/off feel at the lever. 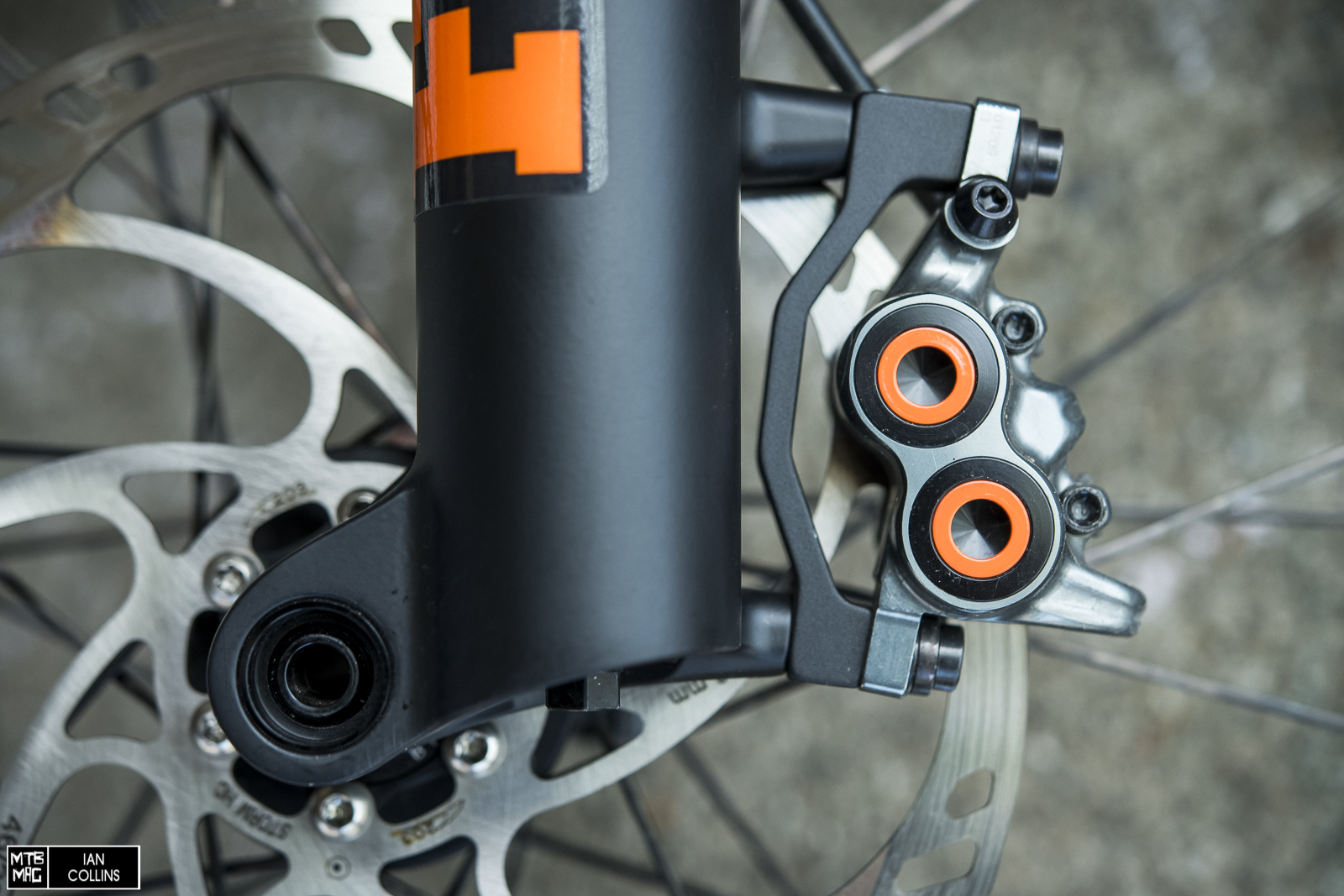 Anyhow, the braking power and consistency have both been fantastic throughout my test time. Long descents where I would typically begin to anticipate a decrease in power and bite yielded no such thing under any circumstances – wet, dry, snowy or muddy. Another aspect that I quite liked was that the MT7 brakes were always totally quiet, unlike most other brakes that I’ve used recently. Now for a couple of comments on the lever…The body is not made from aluminum – rather, it’s made from “Carbotecture”, which is essentially a composite. Magura makes a good case for its strengths here, and I have no reason to doubt the material’s integrity. While I haven’t had any crashes on these brakes, I’ve broken aluminum lever bodies a few times anyways, so I wouldn’t exactly be making a comparison to something that’s invincible anyway. Regardless, that material is likely due the tip of the hat for the MT7’s surprisingly low weight – especially when considering how massive the caliper is. Lastly, the place that the hose attaches to the lever body makes it substantially less vulnerable in crashes. Most brake levers are designed so that the hose connection is its outermost point. The unique approach Magura takes here gives them a leg up when things go South by having the hose tucked closer to the bar, further from harm’s way.

I’ve got to admit, as an American, Magura isn’t the first name that comes to mind in braking, but perhaps it should be. It isn’t often that I find myself considering a smaller front rotor, simply because my brakes would let me. So, I can see why these brakes have been chosen as OEM spec on cost no object e-bikes as of late. I have no reservations about the MT7’s prowess on anything from Trail to Downhill to e-bikes – and I’d especially recommend them to heavier riders who prioritize power above all else. With that in mind, the lever feel and modulation are still excellent, although they do lean toward the more on/off end of the spectrum. While I very much like the lever feel and adjustments of the HC3 version of the MT7, I think the standard HC1 option just might be unbeatable in terms of Value:Weight:Power. Aside from the minor quip that the “leverage ratio” adjustment is seemingly redundant, there is little to complain about – the MT7 HC3’s are the real deal – I’d highly recommend them! 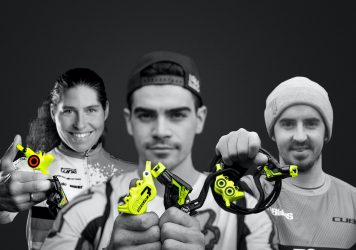 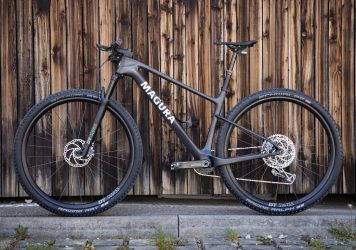 Magura’s Concept Bike With No Cables in Sight