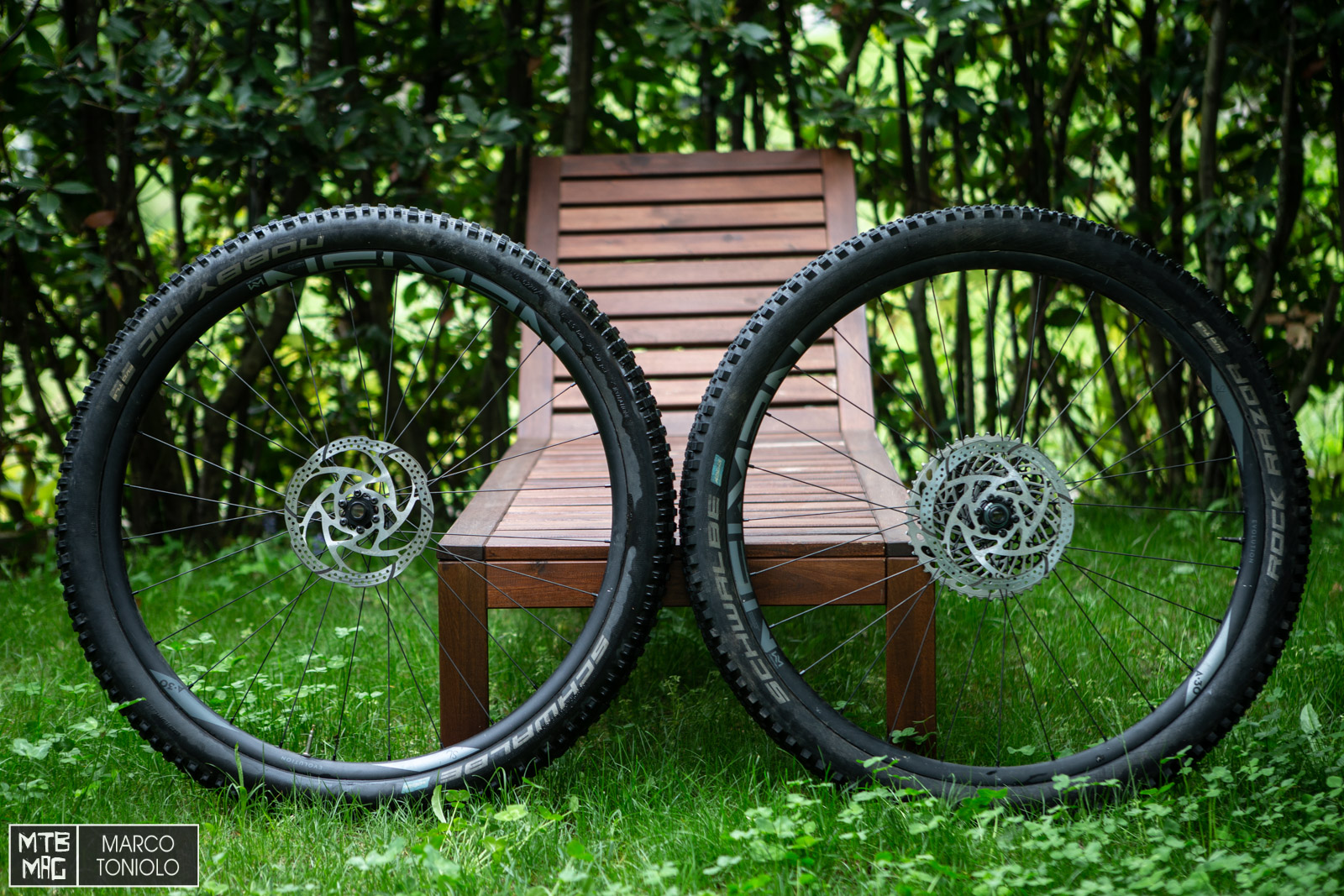 Newmen is a young German company specializing in components. Liteville fans will be glad to know the founder is none else than Michi Grätz, one of the two minds who, together with Jo Klieber, brought that project to life. Once he left Liteville, Grätz created Newmen. 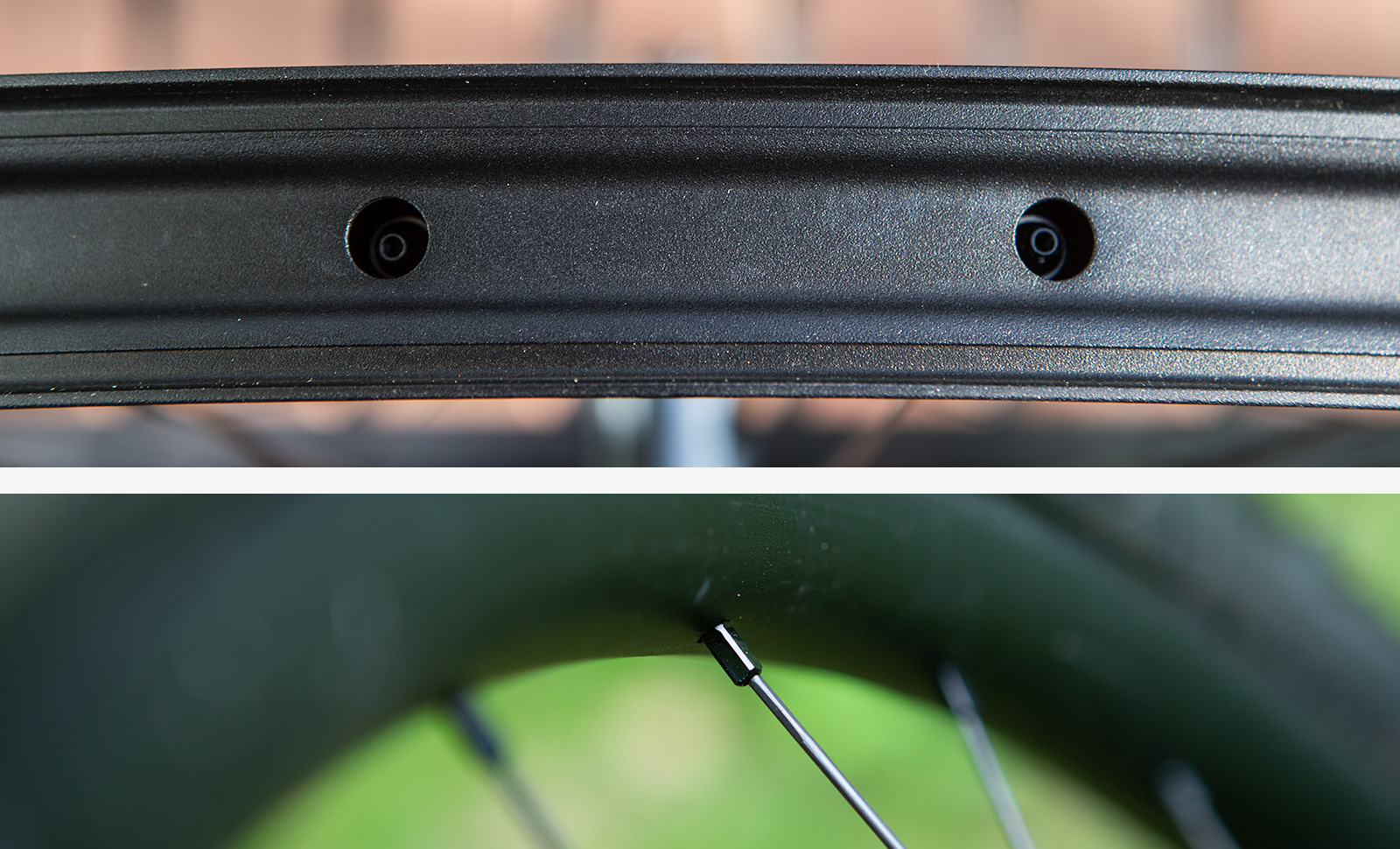 I installed the Evolution SL A.30 wheels on the Yeti SB 5.5 I use for long term tests, with a Nobby Nic at the front and a Rock Razor at the rear, both 2.35” with Addix Speedgrip compound. 1,680 grams is very light for a 29” aluminum wheelset with 30mm inner channel, that’s why I had some doubts about their strength and stiffness. Anyway, let’s start saying the rolling performance of the Newmn is amazing. Just watch the video, and notice that I switched off the camera before the wheel stopped:

It is worth to look at the hub’s construction, in particular the rear one: 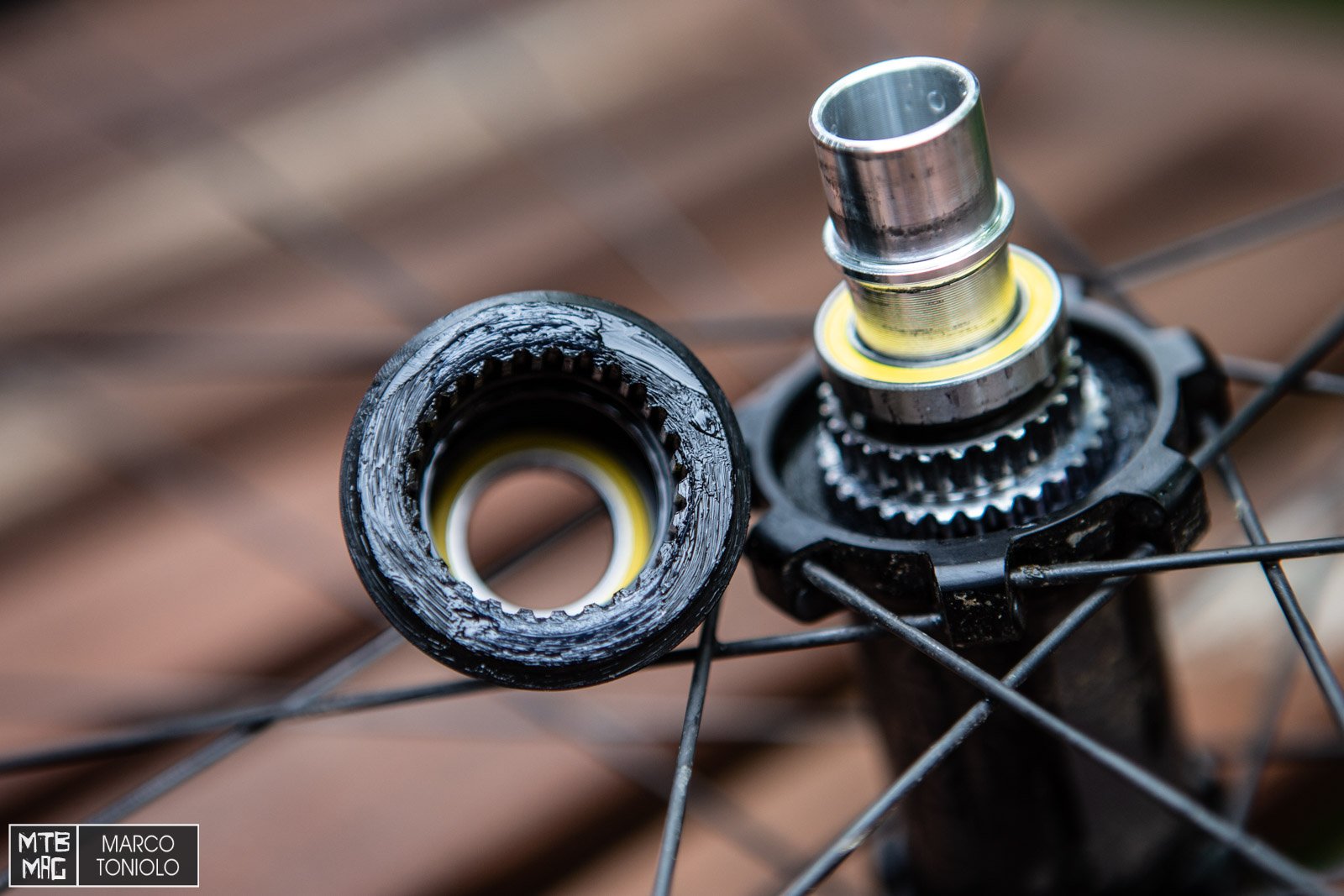 This is how it looks like at the end of the test, after months of riding during wintertime: untouched, still perfectly greased, and the two sealed bearings (the yellow ones) look new. The free wheel resembles the DT Swiss Star Rachet, and in fact it is based on the same principle: not the classic spring-activated teeth, which then go into the driver body, but two cogwheels, whose teeth are constantly engaged, providing a better strength distribution and a more solid system. 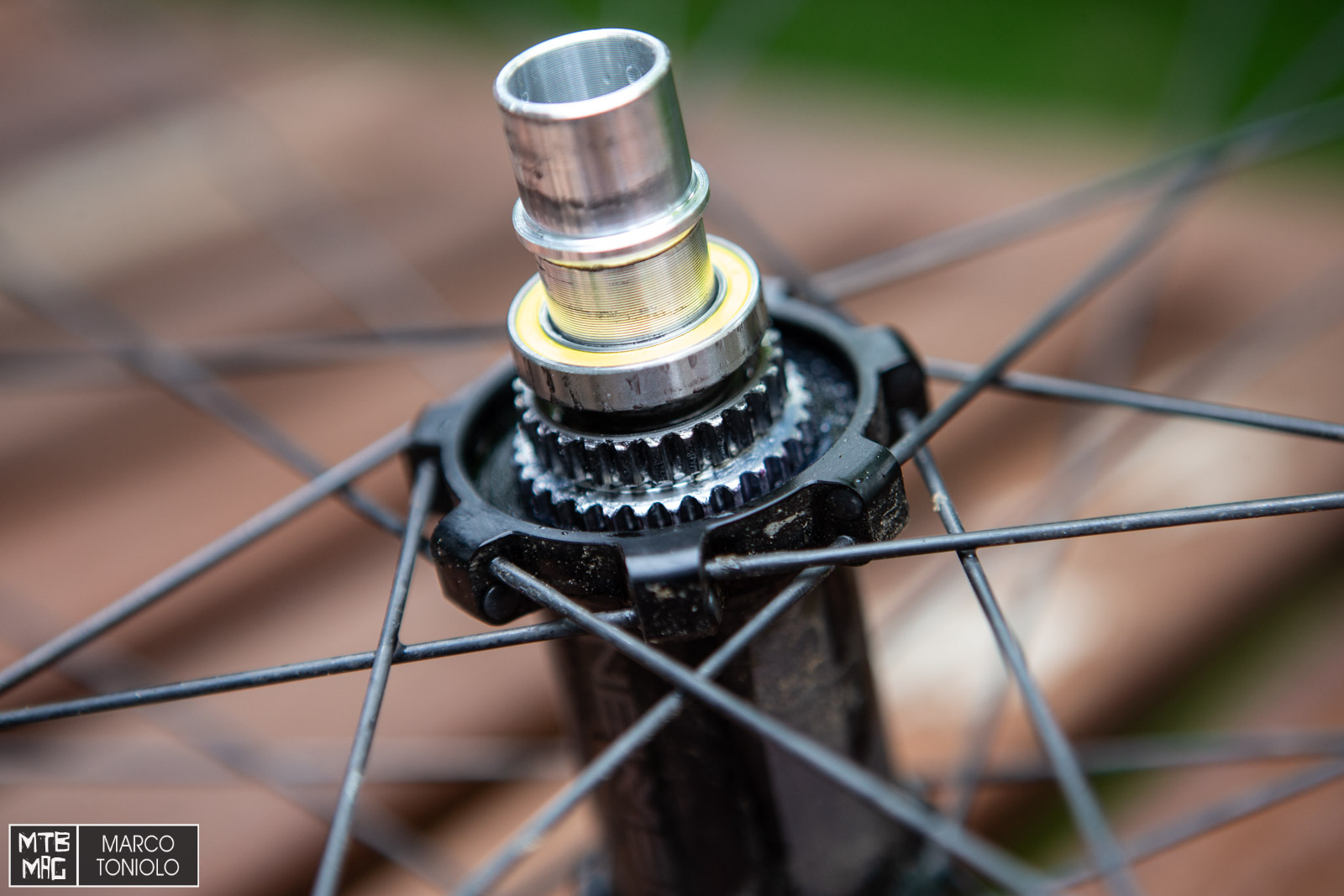 Continuing on with the hubs, they are equipped with a TA cap to set the axial play. Unlike the Mavic system, which gets loose very often, we adjusted the cap once when it was installed on the bike and it was enough. The best way to do it is to open them, put the wheel into the fork or frame, tighten the axle, screw the TA caps all the way down then unscrew them by approximately 20°. After this procedure, the wheels don’t have any play and, most of all, the hubs are not overtightened in order to preserve the bearings.

As the hubs provide great rolling performance and durability, the rims are very resistant to hits. The only way I damaged one was hitting a rock at full speed with the rear tire almost flat because I had a puncture earlier during the same ride. 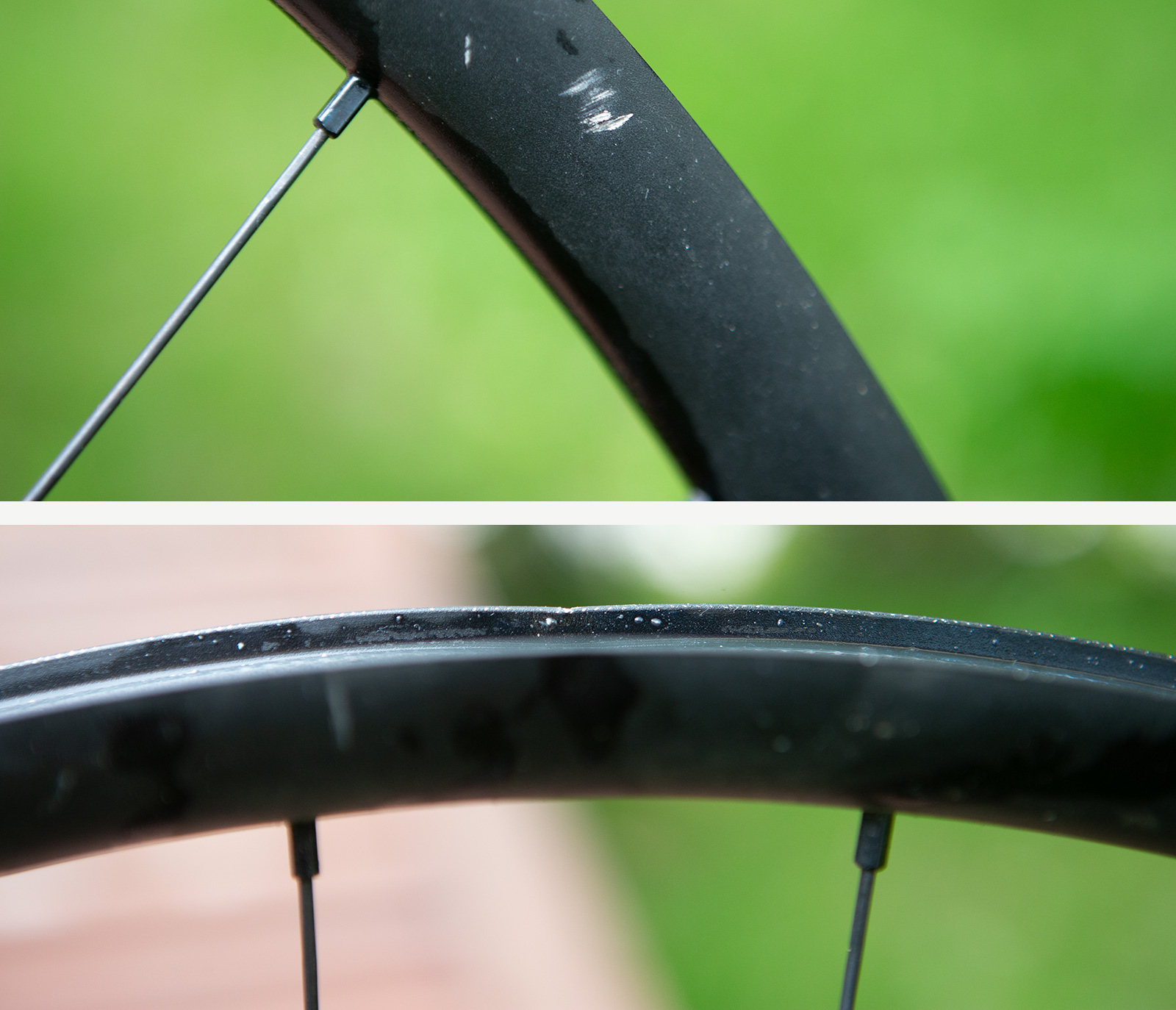 The damage did not affect the tubeless sealing. Apart from that, I just noticed the classic signs of rocks on the aluminium, which is perfectly fine for mtb wheels.

Riding with the Evolution SL A.30 I felt very confident right away in terms of precision and, most of all, stiffness: I can’t say they are “comfortable”, since it depends on personal tastes, but the vibration absorption capacity of these wheels is pretty good. The spokes’ lacing has easily held up for the whole test and the wheels are still perfectly centred, despite the big hit, which damaged the rear rim.

Downhill, with back to back changes of direction they are just snappy: fast and quick, definitely thanks to their weight but also to their overall design, which is a good compromise between light weight and solidity.

They are perfect for all-mountain bikes on long alpine trails, since they make the bike lighter overall and are very reliable at the same time, an essential quality riding in the backcountry. For example, I installed these wheels on my Yeti, together with an air shock, for a rather challenging 70km ride with 2,300 vertical meters of climbing.

Newmen hit the target with the Evolution SL A.30: light, solid, with very smooth and durable hubs. They are precise in handling and have a responsive ride quality. It’s hard to ask for more from a wheelset. And, yes, the price: online you can get them for under 600 Euro. Very highly recommended! 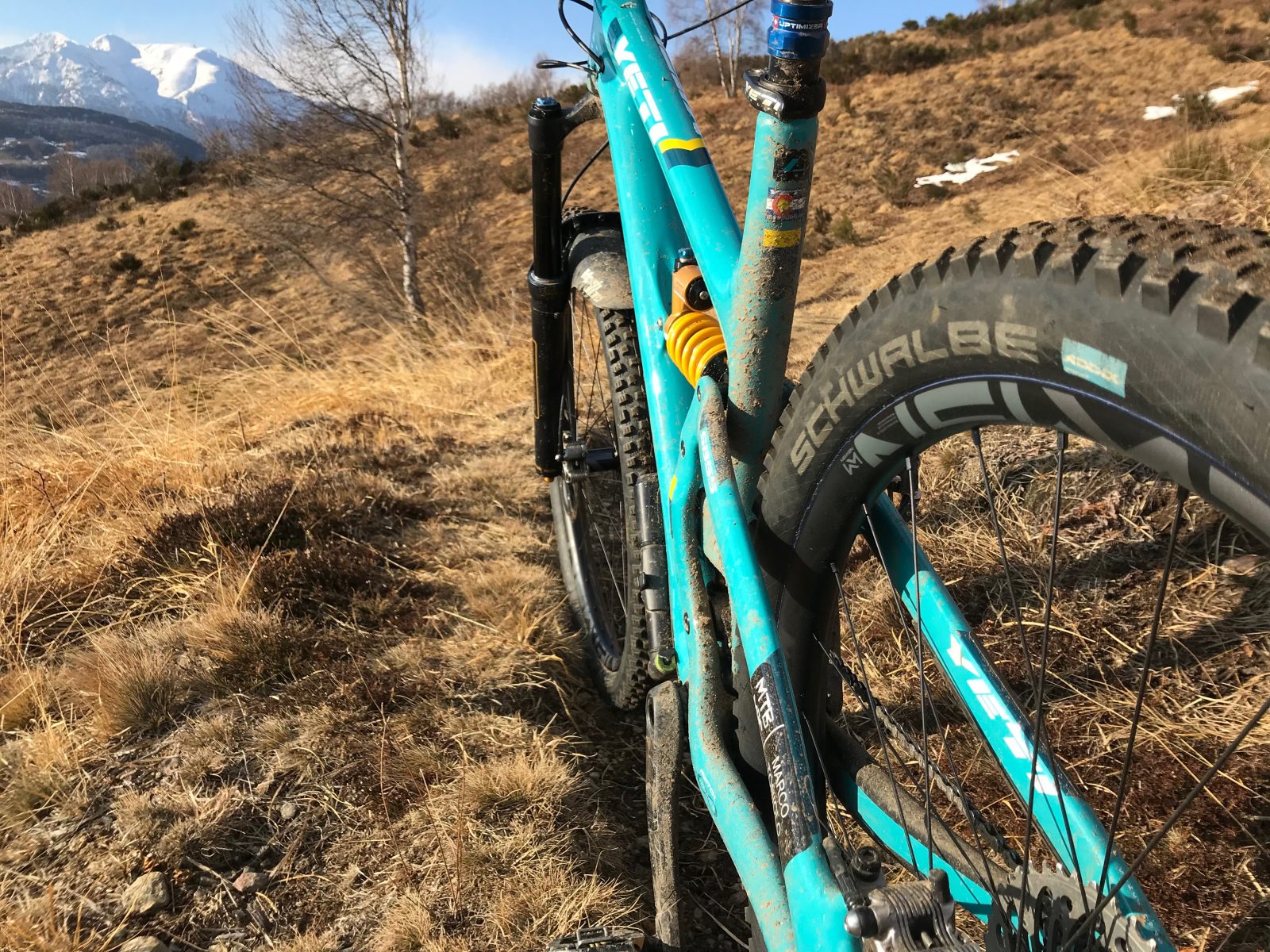