When we first built up our Rocky Mountain Maiden Dream Bike, we did so with both an air shock as well as a coil. The coil that we chose was Öhlins’ new TTX 22 M. It’s basically the aftermarket version of what we first started to see spec’d on the Specialized Demo, but with a different reservoir shape. However, both reservoir shapes are available aftermarket, thus allowing for a broader range of compatibility with frames. Between hearing good things and having an excellent first impression after a brief ride aboard a Demo some time ago, we really wanted to dive into a full review of the Swedish brand’s latest offering to the DH world. Öhlins have been charging hard into the aftermarket world recently and it’s exciting to see a company with their level of expertise entering the MTB arena. 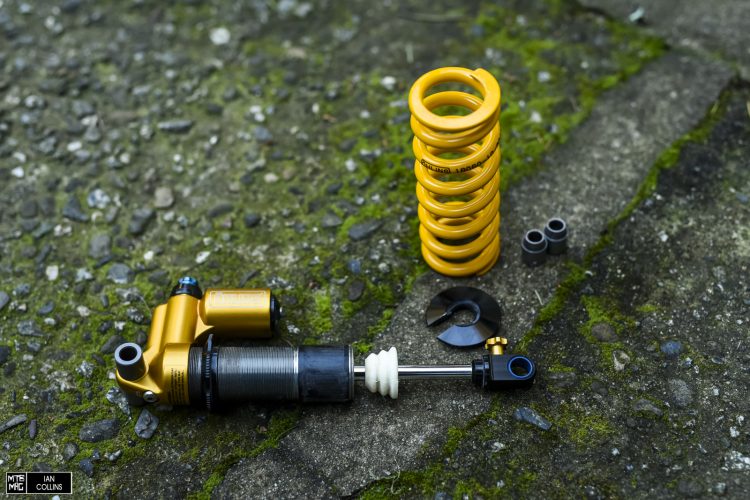 There are basically two common approaches to building a damper: a single tube, and a twin tube, also referred to as a recirculating shock; the TTX 22 M is the latter. When Cane Creek first introduced the Double Barrel (a popular twin tube rear shock) Öhlins helped them design it. Although they are similar in some ways, the current TTX system varies quite a bit from the Double Barrel in how it manages oil flow. Also worth noting is that Öhlins isn’t married to one system over the other. In fact, we recently tested their STX 22 M, which is an air sprung, single tube shock.  Öhlins opted for a twin tube system for their DH and Enduro (coil sprung) shocks for a few reasons. In short, it all comes down to lower operating pressures and faster response times to directional changes. You don’t have to think too hard to realize that in the gravity suspension world those are two very crucial factors. 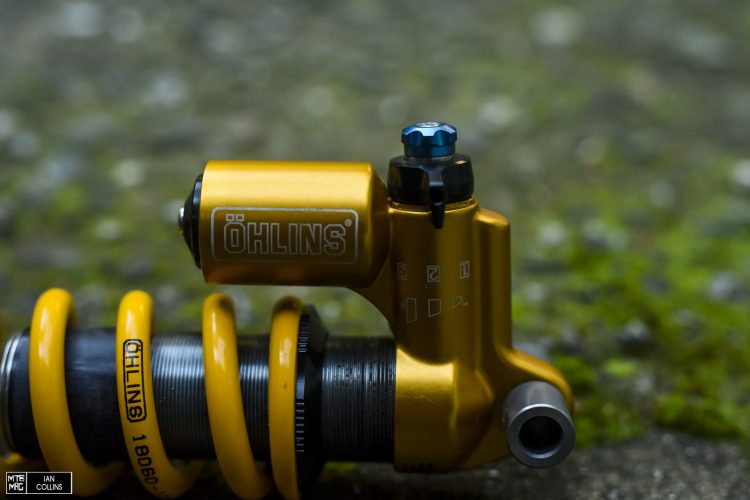 The TTX 22 M separates the oil from the nitrogen (charged at a factory set 175 PSI) with an expandable nitrile rubber bladder in its reservoir, as opposed to a tradition internal floating piston. A bladder allows for improved sensitivity due to the lack of an additional seal and that seal’s inherent increased friction/resistance. Interestingly enough, Öhlins state that the biggest benefit to the bladder is improved efficiency in maintaining cooler oil temperatures. 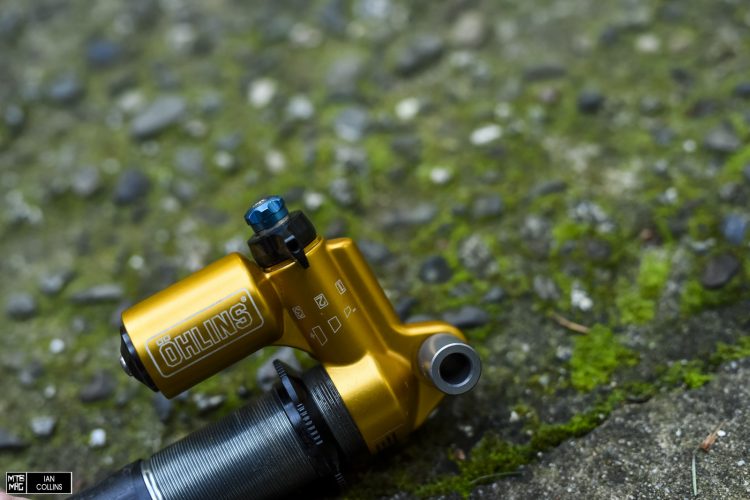 On the reservoir, the high and low speed compression valves are externally adjustable via the black lever and blue knob respectively(shown above). LSC has 16 clicks and HSC has 3 positions. On TTX 22 M units that are 8.5″ X 2.5″ and shorter, the black 3-position lever will be blue and the third position acts as a “trail-mode” style setting meant for climbing. One minor gripe is that the detents on the LSC are a bit vague feeling and tricky to count as there isn’t a very audible click. Especially if you’re huffing and puffing through a full face helmet. The HSC lever however is clear as day. 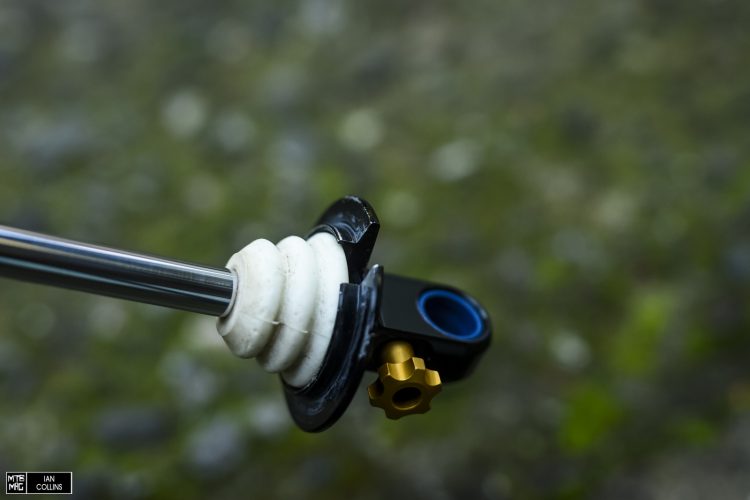 Öhlins, use a specially shaped lower spring collar with a retainer that hugs the bottom out bumper. This way, it can’t fully pancake out when it gets smashed on full compression. This ensures a nice, progressive bottom out with an endless feel as opposed to a harsh, metal to metal clack. As far as hardware goes, the TTX 22 M is available with DU bushings or spherical bearings on bikes which have shock hardware under 22mm wide. 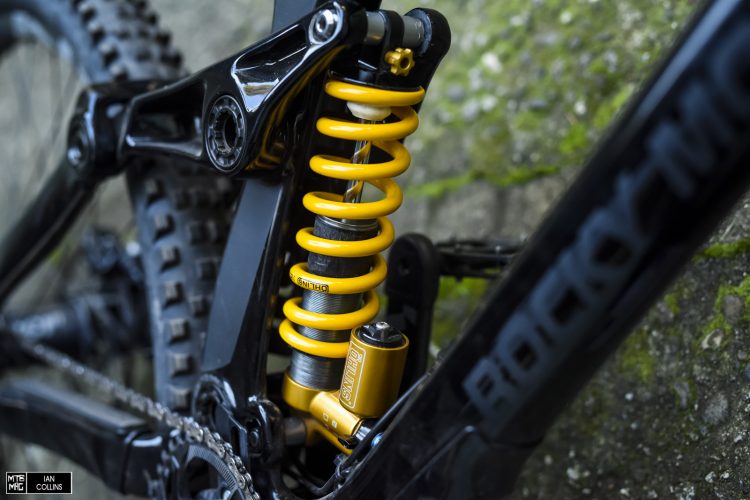 The coil sprung shocks from Öhlins come in rather unconventional 23lb. increments. They claim that by optimizing the spring rates for each stroke range it saves 25-30% over competitors. Curious about that claim we weighed their 411# X 3.0″  spring and compared it to a 400# X 3.0″ spring from another major suspension manufacturer. The Öhlins weighed 492g vs. 663g for the competitor, providing a 25.8% savings. That’s even despite the Öhlins being rated slightly heavier. As a side note, out of curiosity, we compared a stock spring to a Ti spring and only found a 113g difference.

You’re probably wondering which bikes this shock works with and how customized each unit will be. Öhlins have a “tuning bank” for base levels and then further minor tuning from there to hone in on the perfect setup. Everything is tailored for the customer and every customer is different so they have a very vast settings bank and obviously the customer also has the external options once they receive the shock.

OK, even though we feel that we’ve barely scratched the surface in terms of tech talk, let’s dive into how it actually rode once we hit  the trails. Over the course of the last 7 months, we spent time on the TTX 22 M in a broad range of terrain. End of the year, battered terrain lift assisted laps at Northstar in Lake Tahoe, shuttles all over Santa Cruz and a heaping helping of shuttles on our favorite track a few hours South.  Throughout the aforementioned, we spent time on proper bike park style trails, super steep loamy trails and just flat out DH race style trails. All in all, we got a broad range of riding in and feel confident that we put this shock through the paces.

The author trying to keep space between himself and Luca Cometti. The first half is pretty flowy, if you want to cut to the rowdier bits, skip to the 2:35  mark.

The first thing we noticed after a quick parking lot bounce was that unsurprisingly, the TTX 22 M is stiction free. The breakaway force is next to nothing and the action felt very light off the top. Once we got into the thick of it, we were surprised at by how much support the bike had. We tested it on a Rocky Mountain Maiden which is claimed to be quite progressive, but in actuality we haven’t found that frame to have quite as much ramp as was claimed. Perhaps what impressed us most was how well this damper struck a balance between compliance and support. The TTX 22 M kept our bike higher in the travel, resisting diving and forces from mass transfer (railing berms, pumping off of a lip) but somehow also opened nicely when we got into the fast, heavy, successive mid sized hits. So far we haven’t ridden any other shock with this same sort of duality. It feels progressive when you want the support, and it feels linear when you need it to plow through chunder. Is this due to Öhlins’ claims that its twin tube design and expandable bladder help it better manage high speed events and directional changes? Quite possibly. As we found ourselves going through the tuning phase, our 185 pound test rider bounced between a 434# spring and a 457# spring. On smoother, faster trails he’d opt for the latter. This may sound strange, but the range in the damping adjustments didn’t feel mega broad. Then again, it had more usable range given our tester’s body weight. This is the benefit of avoiding a one size fits most approach. Also, since it felt pretty spot on from the get go, we weren’t yearning for anything very far from the middle of the range. Öhlins’ approach with both high speed compression and rebound seem rather unconventional with just 3 settings and 7 clicks respectively. Then again, on most setups we don’t find ourselves monkeying around too much with those two settings; we’re usually with in a 2-3 click range at most. However, with low speed compression we typically dabble within that range a bit more. On really rough tracks we opened it up quite a bit, but in bike parks and on jumpy, flowy tracks we ran LSC just 2-3 clicks from closed. All in all, the TTX 22 M had a nice, useable range. 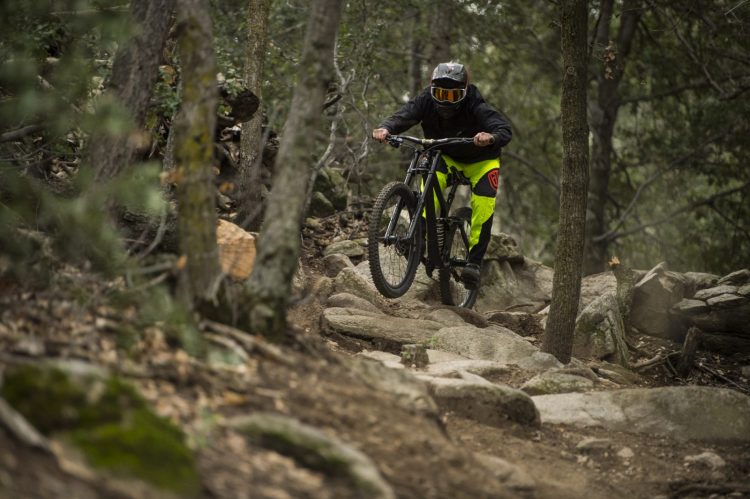 If there is one part of the tuning process that can be a bit tricky, it’s rebound damping. We’ve ridden some shocks in the past that felt dialed in the parking lot and when we went to pop off the lip of a jump, we got bucked. While we like the external adjustments from Fox & RockShox which offer high and low speed rebound (DHX2) or beginning and ending stroke rebound (VividR2C), sometimes getting them set just right can be toilsome. With only 7 rebound clicks, we quickly found that “just right” setting on the TTX 22 M . We only made a 1 click adjustment from track to track, running it faster on rough, chattery tracks and slower where we found bigger jumps. We’ve just experimented with this one shock on one bike, but we have a pretty high level of confidence that Öhlins’ tuning bank is dialed and that most customers who purchase aftermarket shocks will be happy with their tune.

As far as value is concerned, the TTX 22 M is just slightly more costly than a Fox DHX2 ($599) and substantially more than a Vivid R2C($460). If you’re buying considering this shock as an aftermarket purchase we feel confident in recommending it as a product that will improve your bike’s ride quality. It’s supple, strikes an incredible balance between being supportive and plow like, and handles the huge hits without exhibiting any signs of nervousness. On long, rough descents it manages heat nicely without  any changes in behavior from top to bottom of the track. We hate to sound redundant, but in our past reviews of other Öhlins products, we’ve noted that the best way to really summarize how they felt was simply “in control” and the TTX 22 M is no exception. With as much experience in two wheel sports as the Swedish company has, this comes as no surprise. While we don’t claim that this damper blows everything else out of the water, it is safe to say that it is the most refined and well behaved shock that we’ve ridden to date on a downhill bike.

Thank you to Luca Cometti for the Action Photos & Follow Cam.