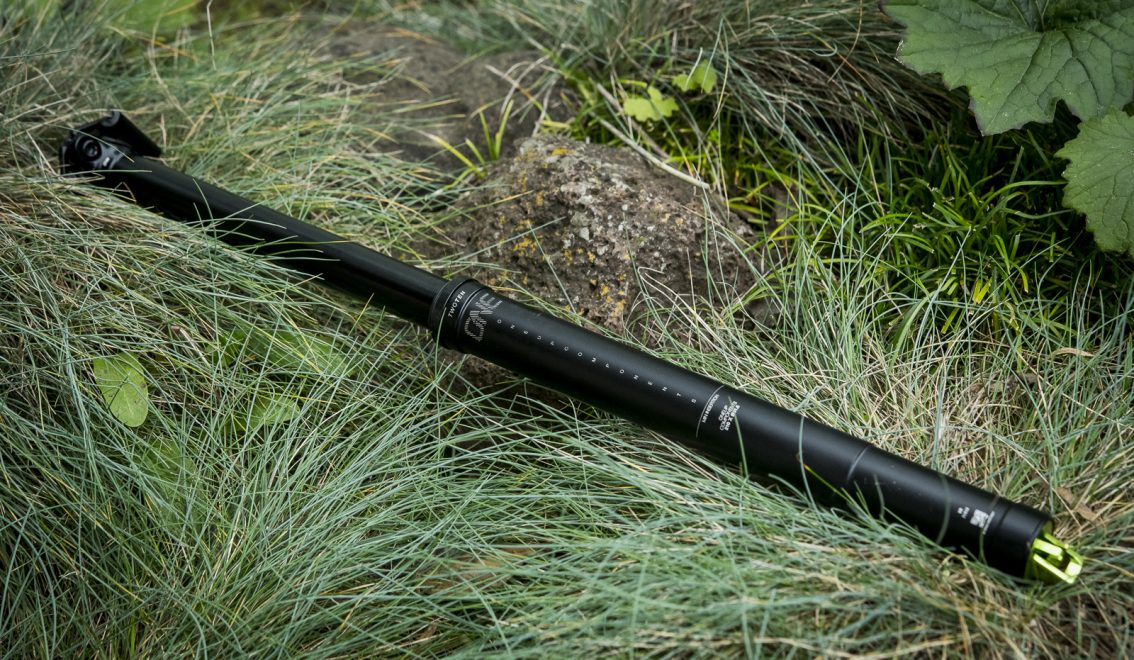 Amongst the current crop of dropper seatpost offerings that are both popular and well regarded, Squamish based and rider owned brand OneUp is steadily gaining ground both in the aftermarket and OEM segments – for good reason. Now in its second iteration, one thing in particular that jumps out about the seatposts is that they have very short lengths relative to their travel. I’ve been cruising along on the longest legged 210mm travel offering this winter, which for the sake of reference comes in pretty close to the overall length to 175mm Fox Transfer, but with 35mm more travel. Read along to see how it’s been working out … 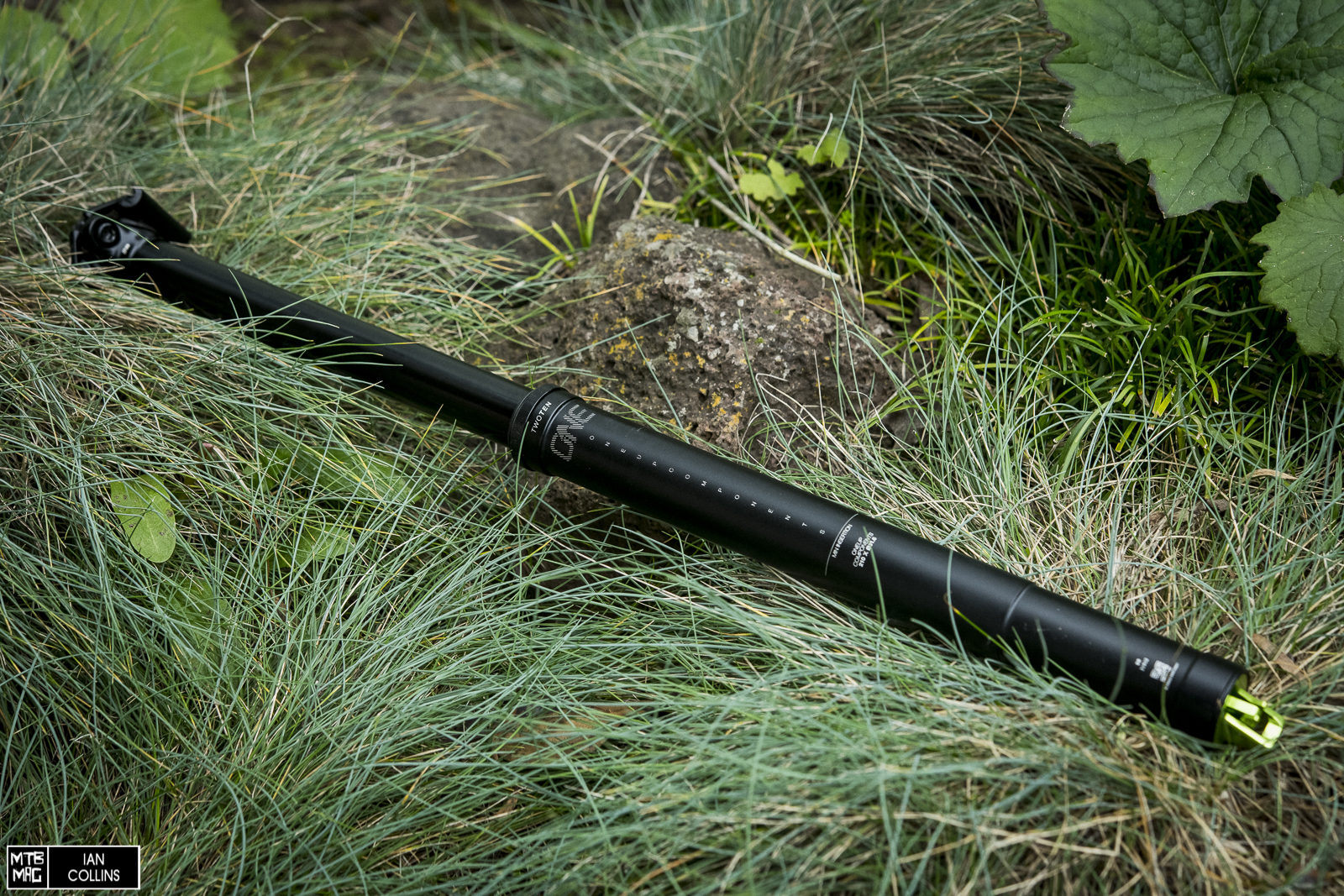 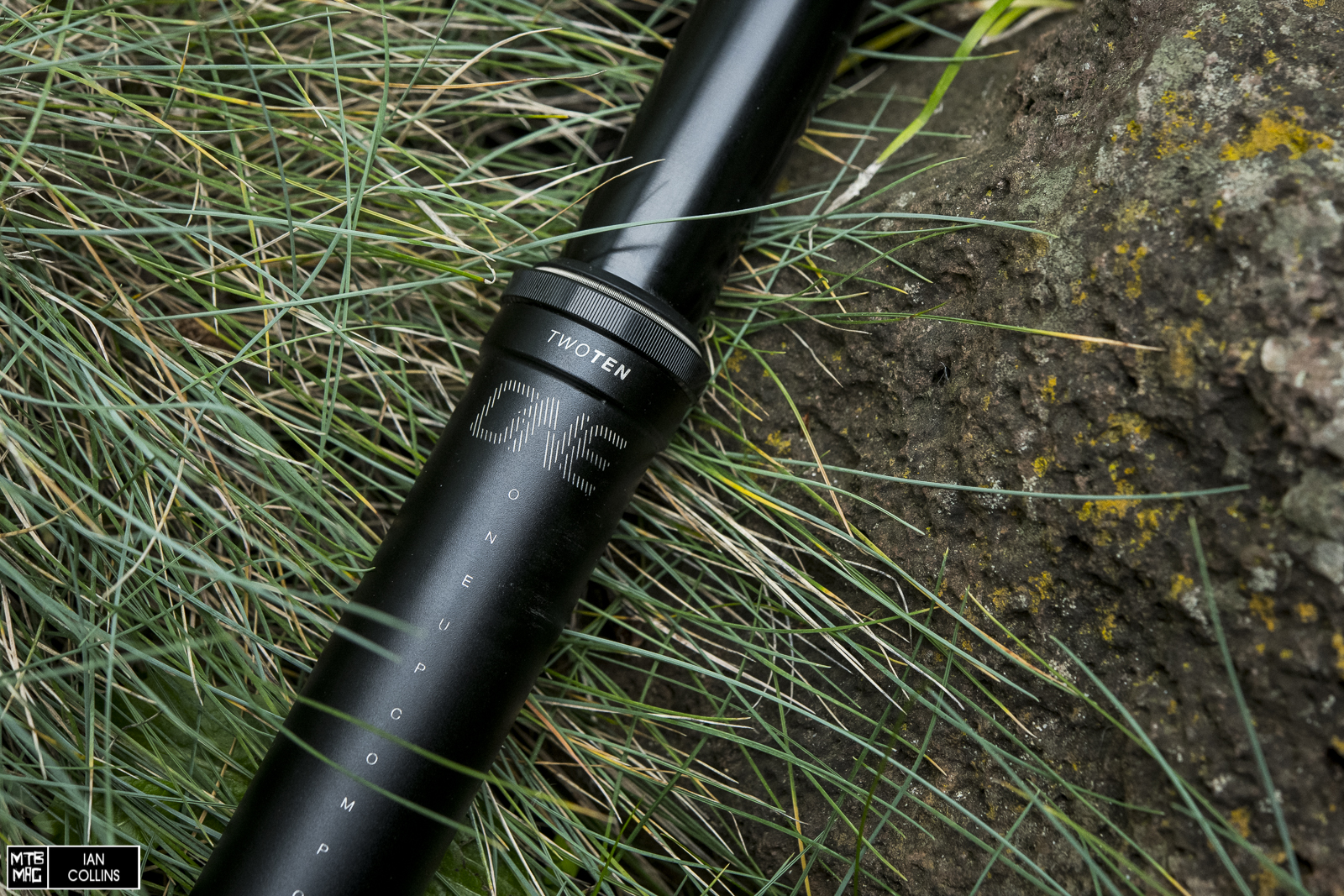 At 210mm, the OneUp is the longest travel mainstream offering, at least here in North America. It’s worth pointing out that there is an obscure German brand that bests it, but just by 2mm. 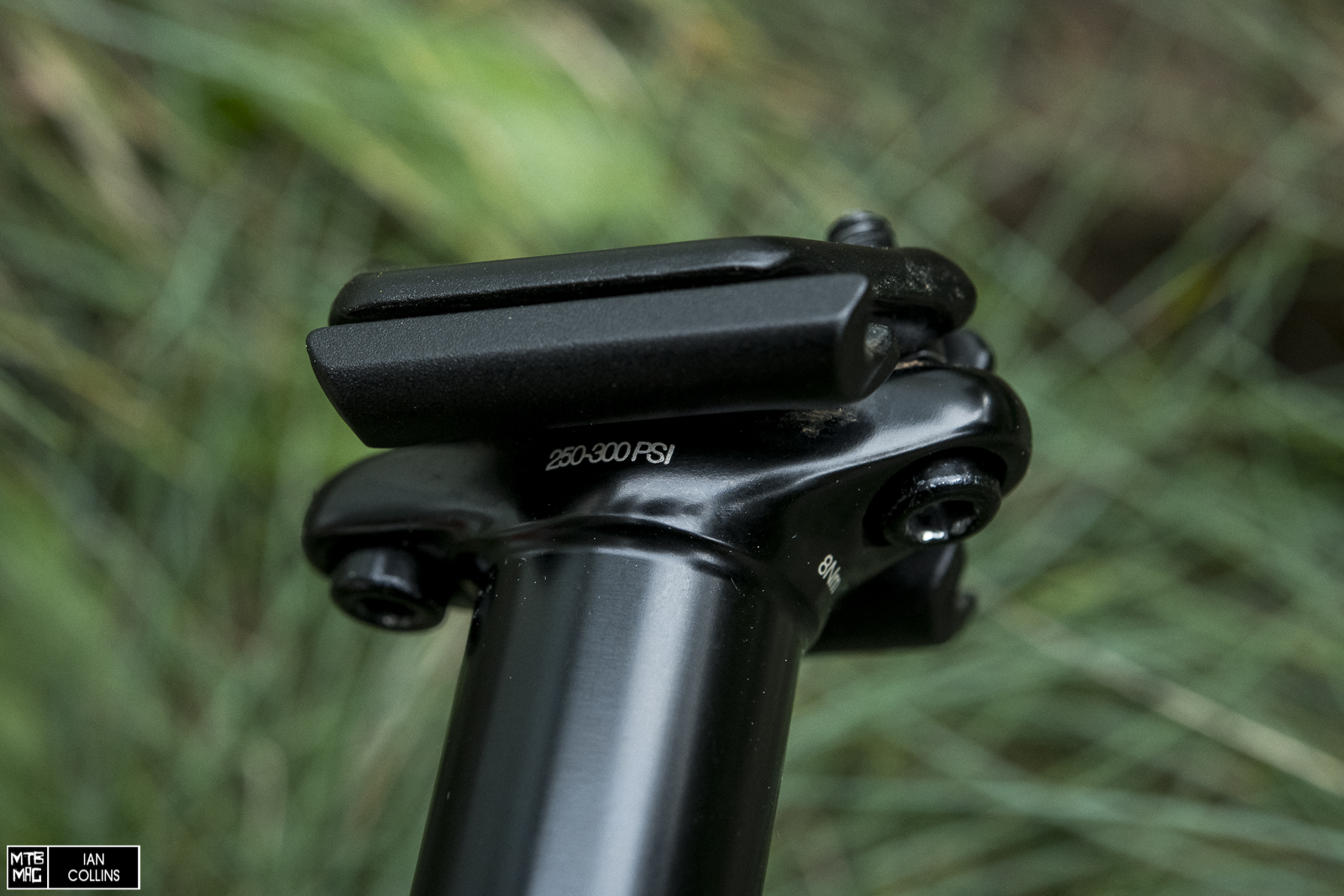 The cartridge is accessed by removing the clamps and can be inflated via a schrader valve. 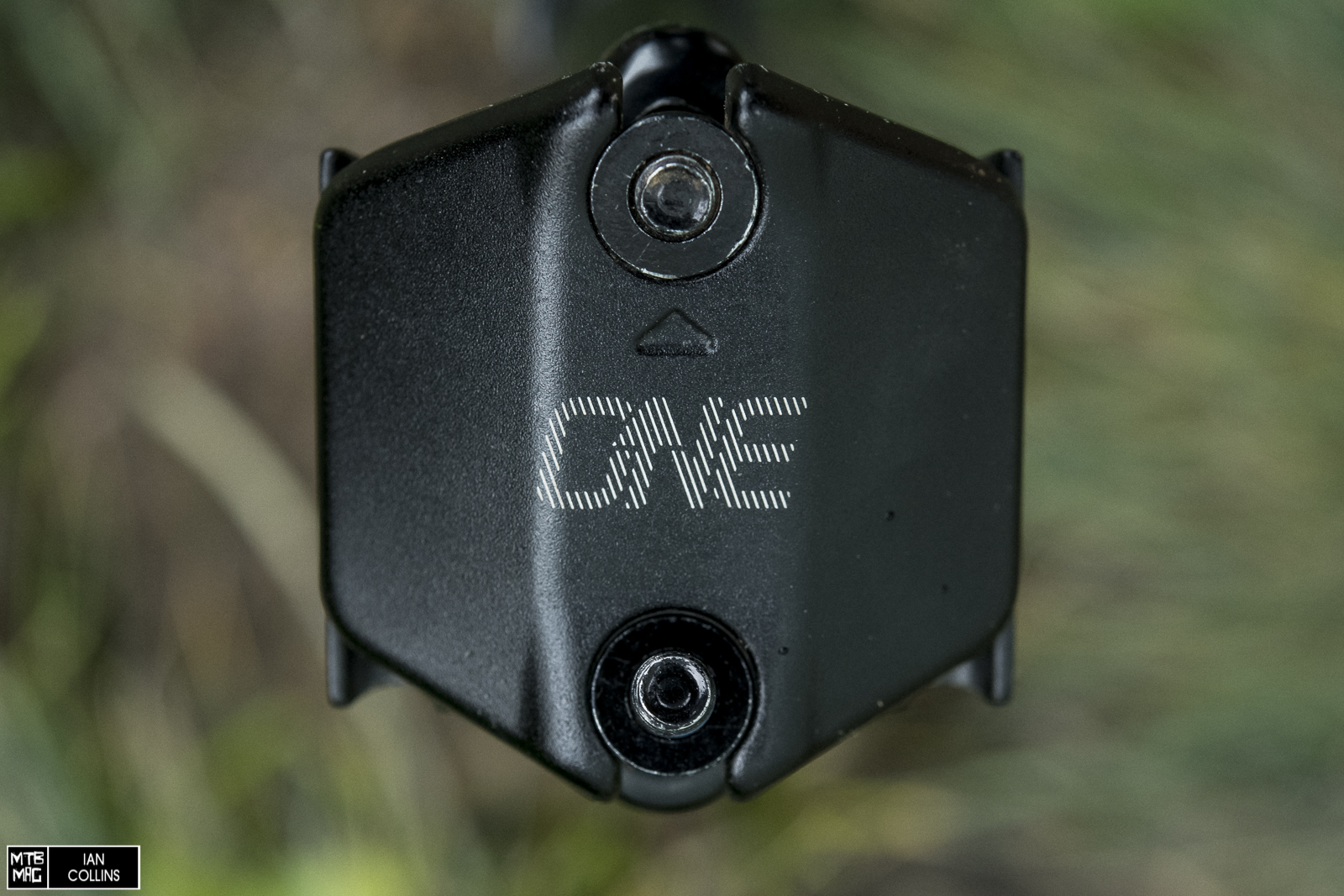 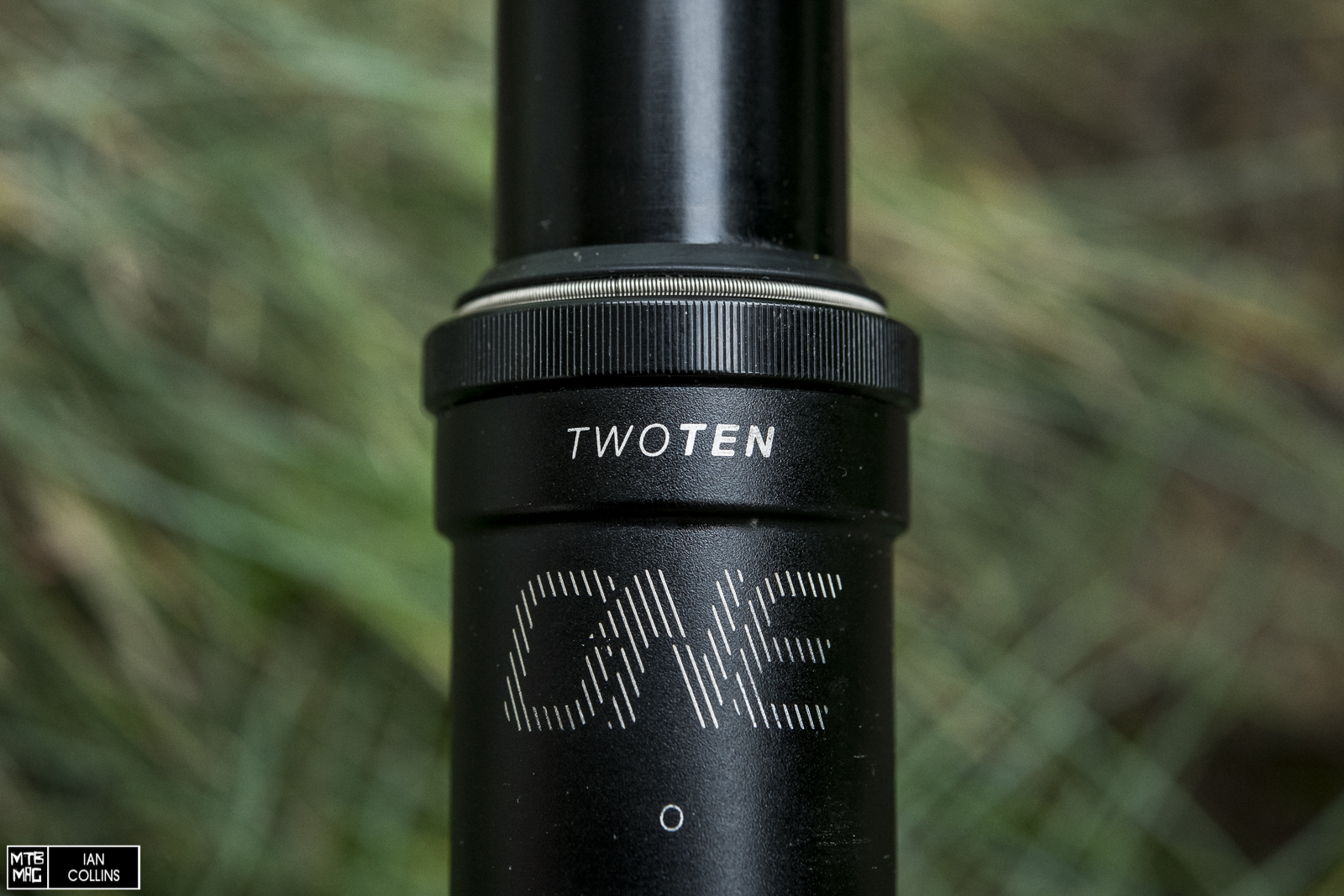 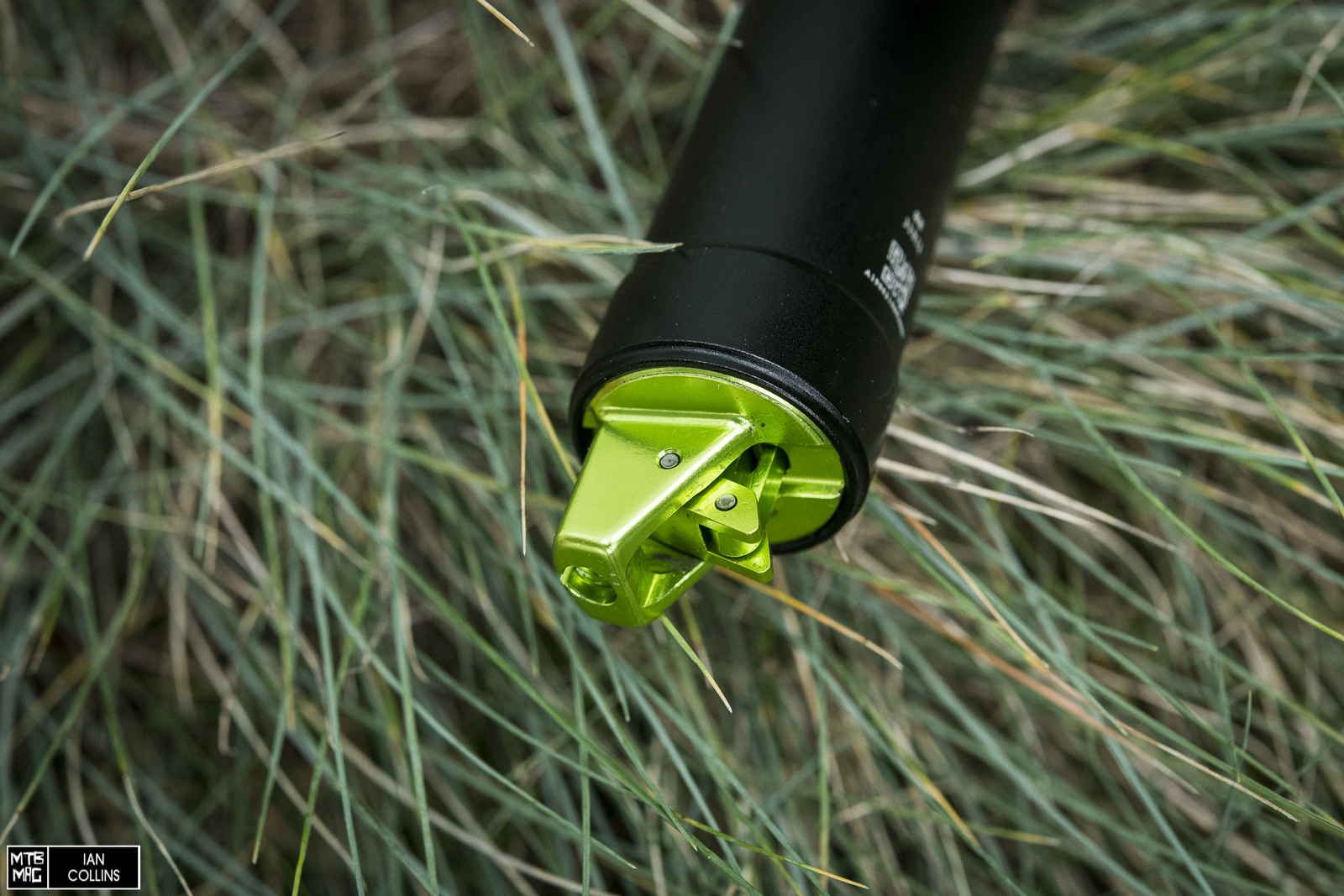 The bottom of the seatpost is a fairly run of the mill, standard design, but it also manages to keep the working parts tucked into a fairly short, low profile package. This means minimal interference with the inside of your frame. 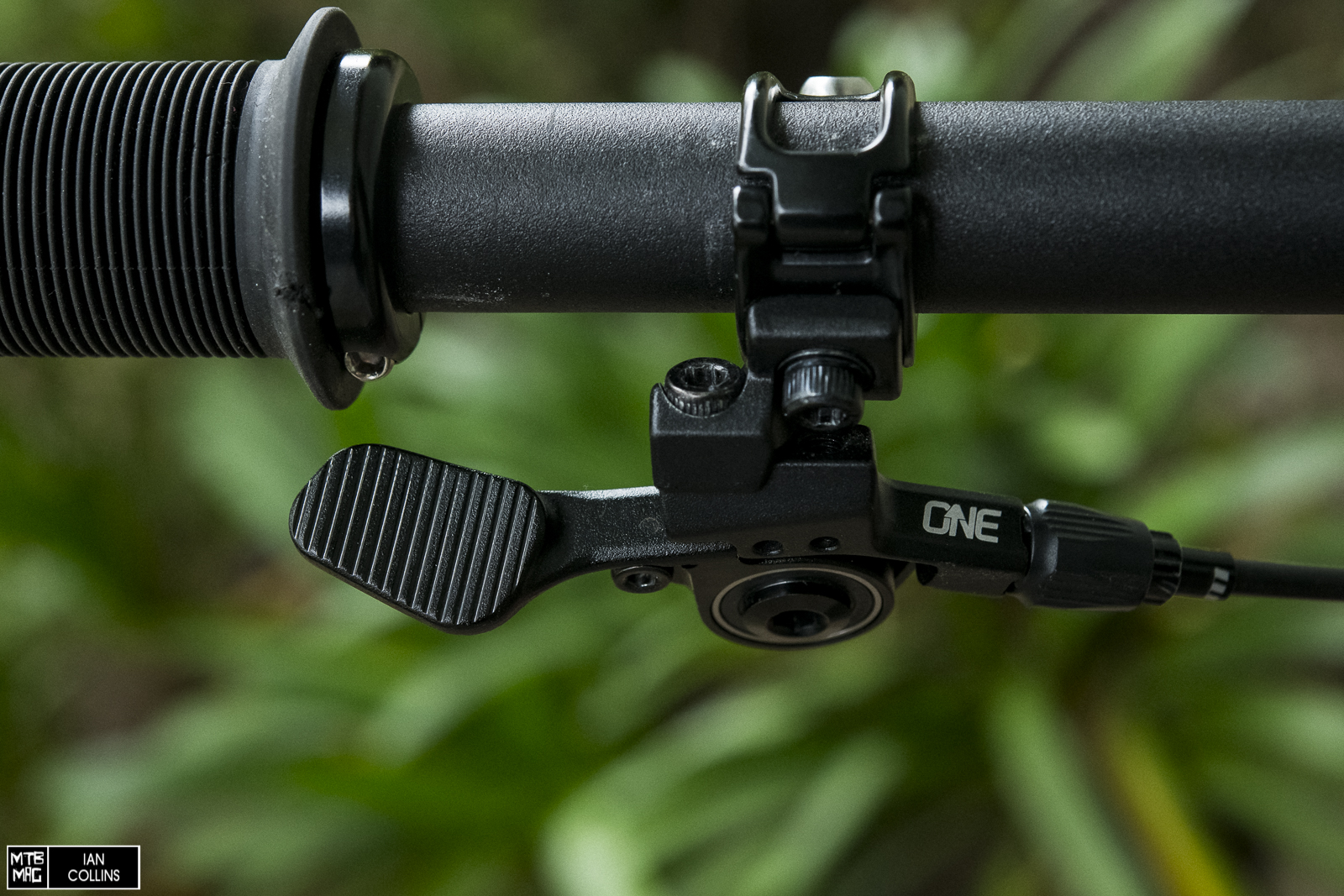 While you could potentially use a slew of different brand’s levers to actuate your post, OneUp’s cost $49 and has a really nice feel. Its thumb paddle is ergonomic and grippy. The main pivot is fairly large and rolls on a single cartridge bearing. It’s available with its own independent bar clamp as well as Matchmaker and I-Spec, and has 3 different inboard/outboard mounts. 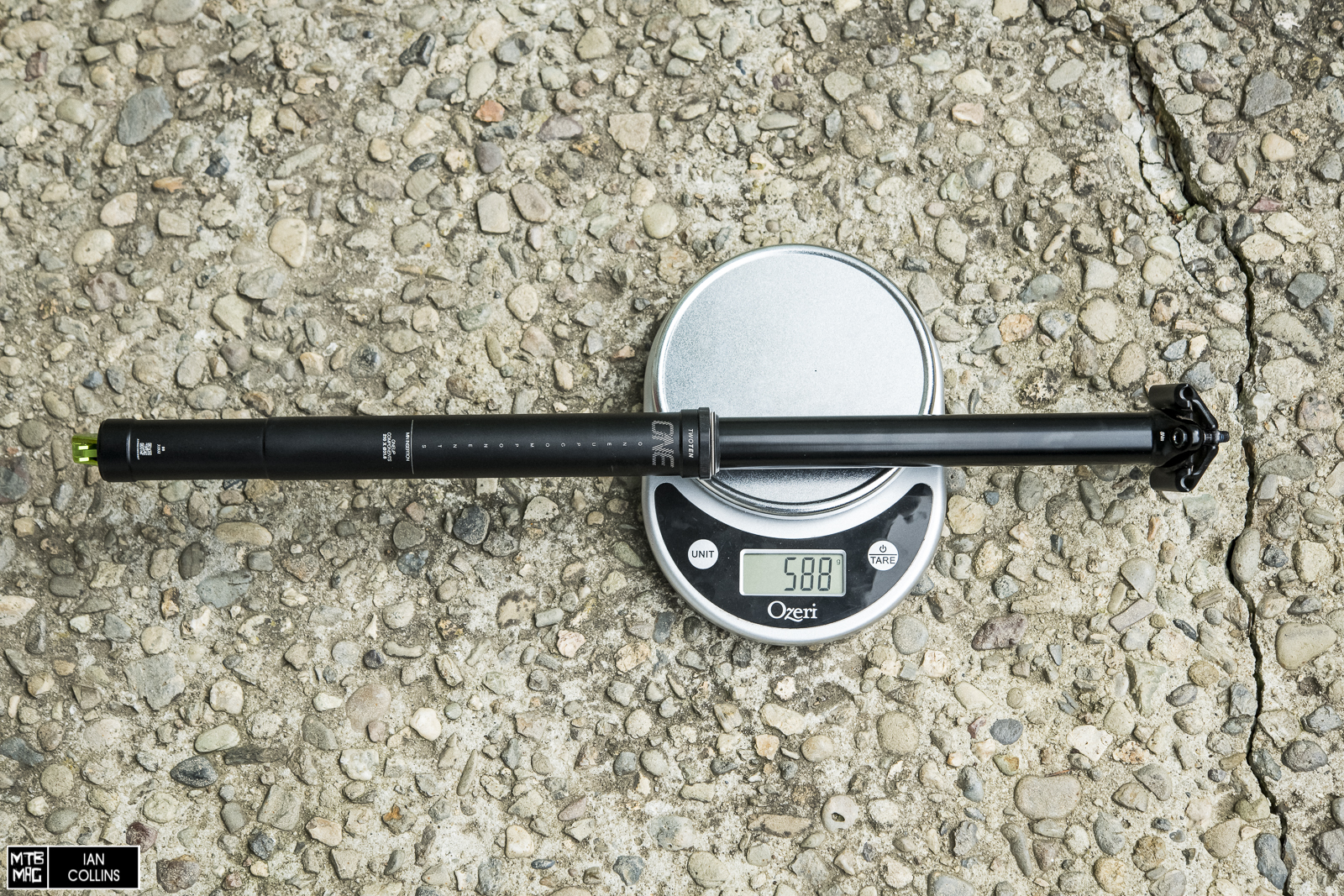 The seatpost itself came in at 588 grams for our 31.6mm X 210mm version. Keep in mind that’s the second heaviest in the range of diameter / travel offerings. Comparatively speaking, the weights are pretty light due to the fact that there is less material within a given travel range.

Setup took all of 10 minutes and was a total breeze. Getting the butt of the cable into its place at the bottom of the seatpost is easy and unlike some brands, it didn’t want to pop out while trying to get it under tension. One thing I noticed right away was that the lever itself sits more underneath the handlebar than most. By that, I mean it sits closer to the front wheel than the rear wheel. This took a minor adjustment period, but one thing I appreciated was that it’s further from your knees and thighs when you get a bit loose on the bike. This might sound inconsequential, unless you’ve had lever completely rip through your kneepad like I have. All in all, the lever has a nice shape, light action and is super adjustable, so no complaints there. 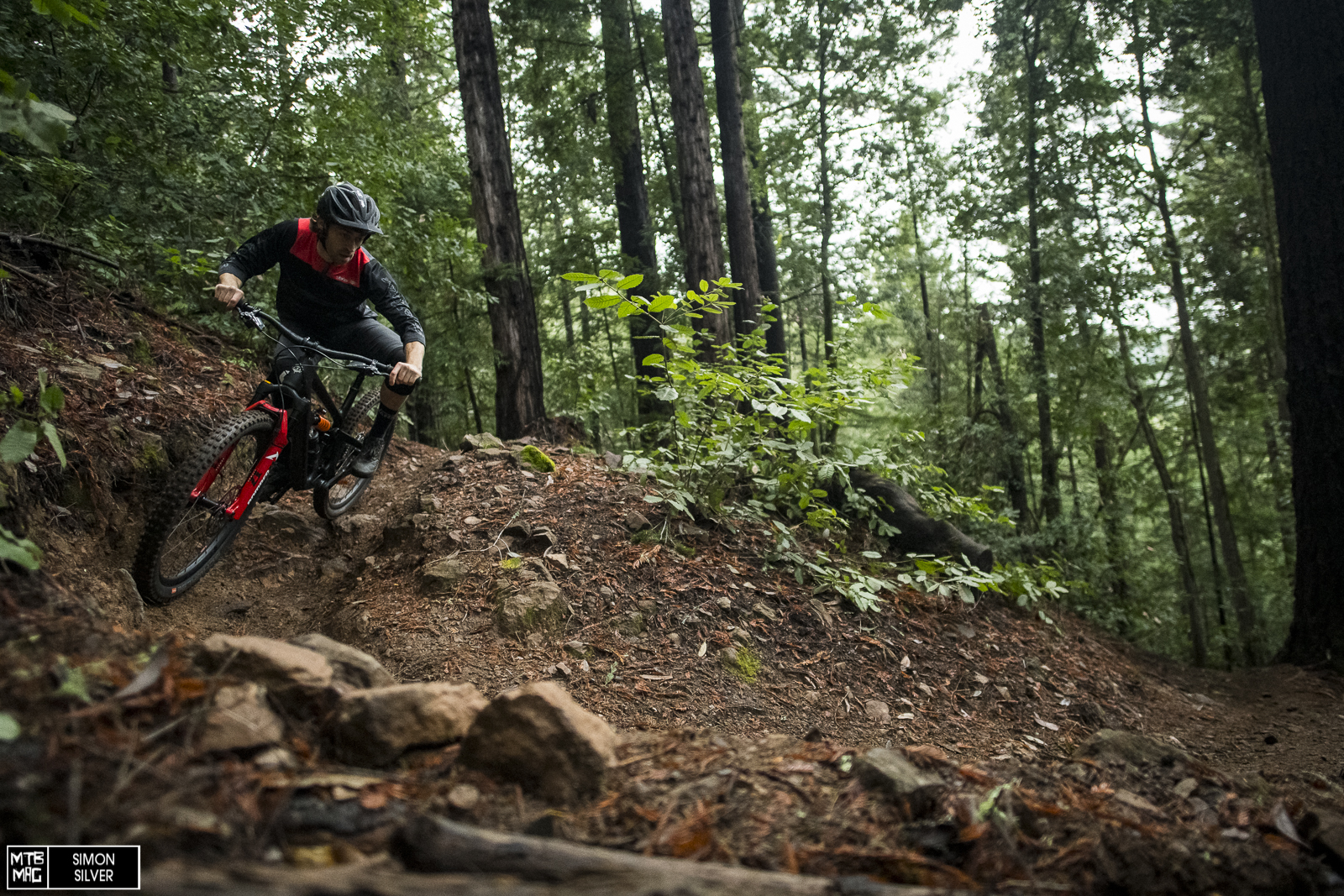 Despite running at a relatively high 250-300PSI range, it was refreshing that the OneUp seatpost allows you to feather the return speed at the lever – it doesn’t just come rocketing up with a bang. 210mm was hands down more than enough travel, even on the steepest terrain around. In fact, while I set the top out to the perfect climbing height, I often found myself riding with the seatpost lowered to a point where it still had about one more inch of room left – particularly on mid grade terrain where I wanted to be able to push the bike around with my thighs against the saddle. At 6 foot tall with long limbs I’m typically wanting more out of my droppers if they aren’t 175mm or more. With that in mind, there are plenty of much taller riders out there, and the OneUp will likely have great appeal amongst them – at least in this size. Throughout my time testing tis seatpost, so far it hasn’t developed any additional play. Out of the box it has just the slightest side-to-side movement, which is the required amount to keep things moving, but it’s undetectable on trail in the saddle. It’s worth noting that OneUp sells pretty much everything you’d ever need to overhaul your seatpost directly on their site. They also have very dialed videos which show you how to change travel and/or perform service on the post at home. The seatpost head was a breeze to adjust and I appreciated the larger 5mm hardware, which makes for easier fine tuning trailside with a smaller multi tool. Lastly, while most dropper posts manage to hit the mark with regard to stiffness these days, the OneUp was no exception and simply wasn’t a conscious factor under power on the climbs.

At the end of the day, I’ve been wracking my brain to come up with a single complaint regarding this seatpost and I’m coming up short. This is the part of the review where we focus on value, and in that arena OneUp is simply beating up on the big brands – all of them. This seatpost is not only much more affordable than what RockShox and Fox have to offer, it’s also flat out superior in terms of its performance, ease of maintenance and travel: length ratios. If you’re on the hunt for an aftermarket dropper seatpost, you’d be completely foolish to pass over what OneUp has to offer – it is far and away the best bang for the buck on the market. 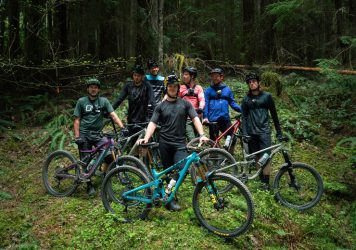 [Video] Richie Rude Versus the Locals 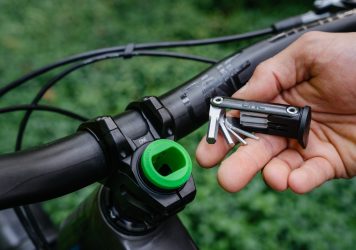 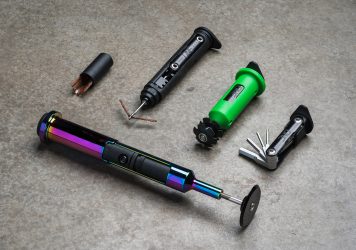