This past Winter, Orange Seal sent us their tubeless sealant and a valve kit for testing. According to the Texas based brand, their fluid is good at a broad range of temperatures and altitudes. They claim the “Regular” formula in test here, has the ability to seal punctures of up to 1/4″ in diameter and slices of up to 3/4″. Interestingly, Orange Seal offers their 3 different formulations with the main differentiating variable being its lifespan. The varying temperature ratings, ability to seal and other factors are all important, but the shelf life will ultimately have more of an effect on how much you use and how often you have to freshen your tires’ supply. Anyhow, let’s dive in… 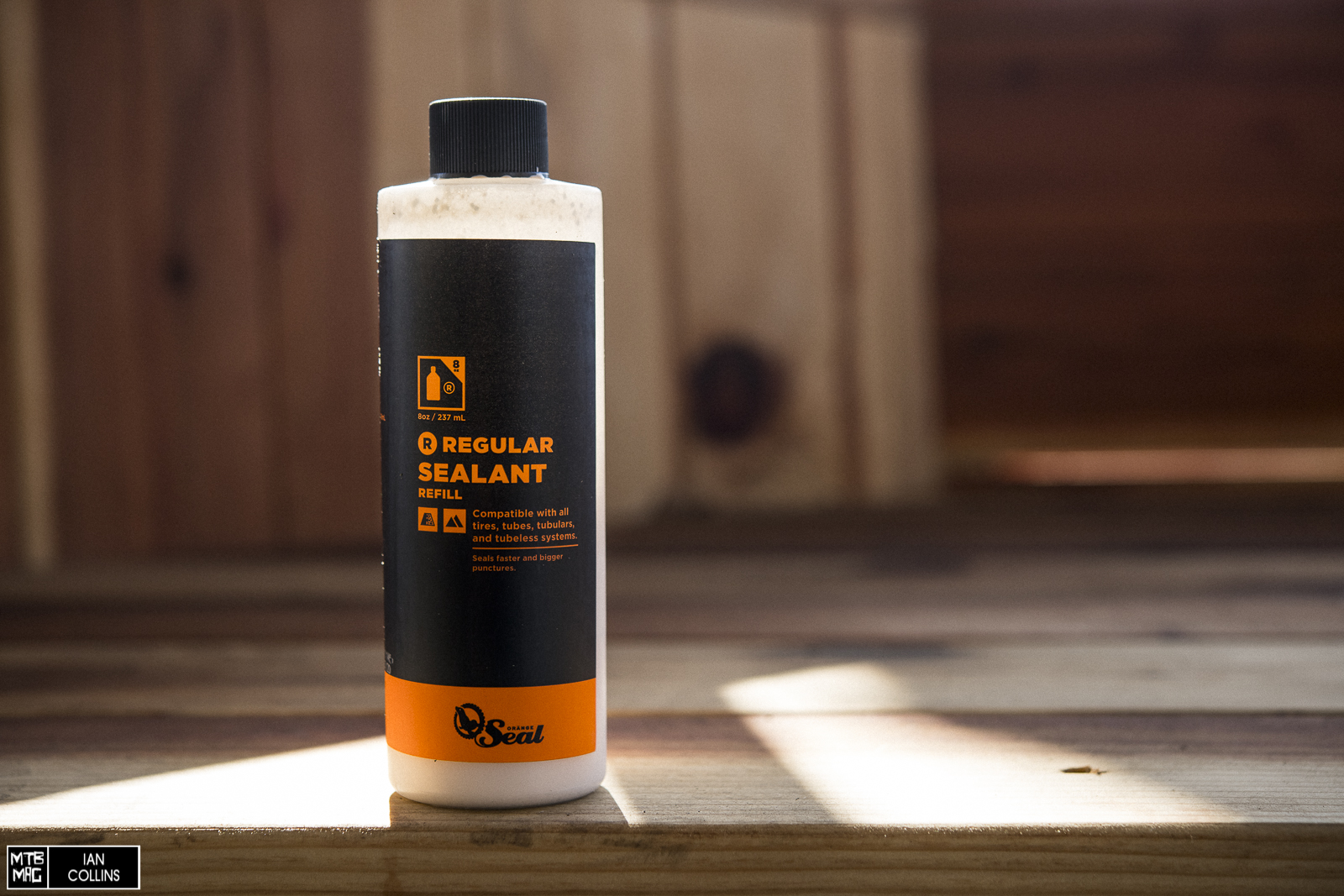 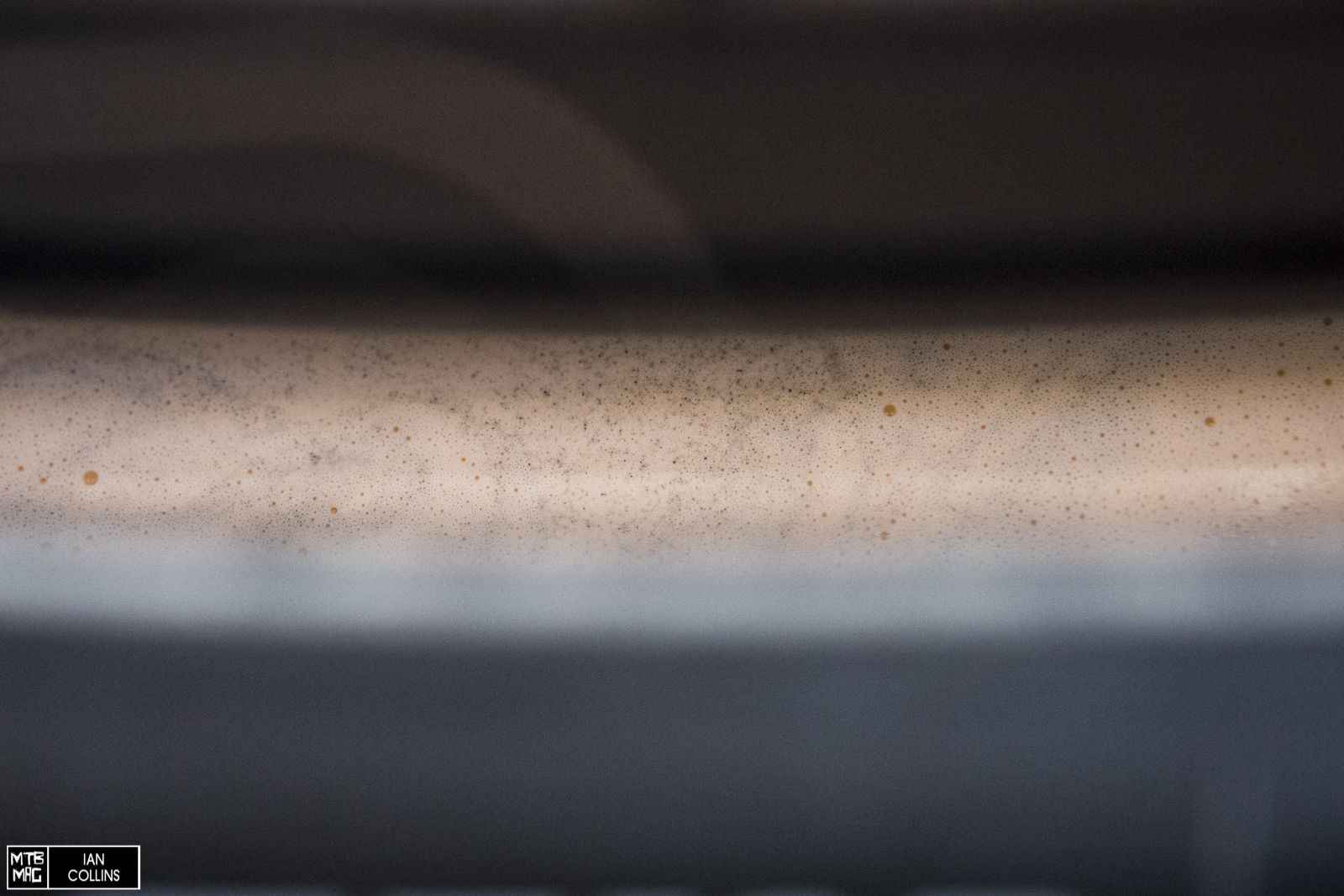 Foamy little bubbles – after an aggressive shake before install, Orange Seal is more like a foamy latte than it is chunky like some other brands’ sealant. 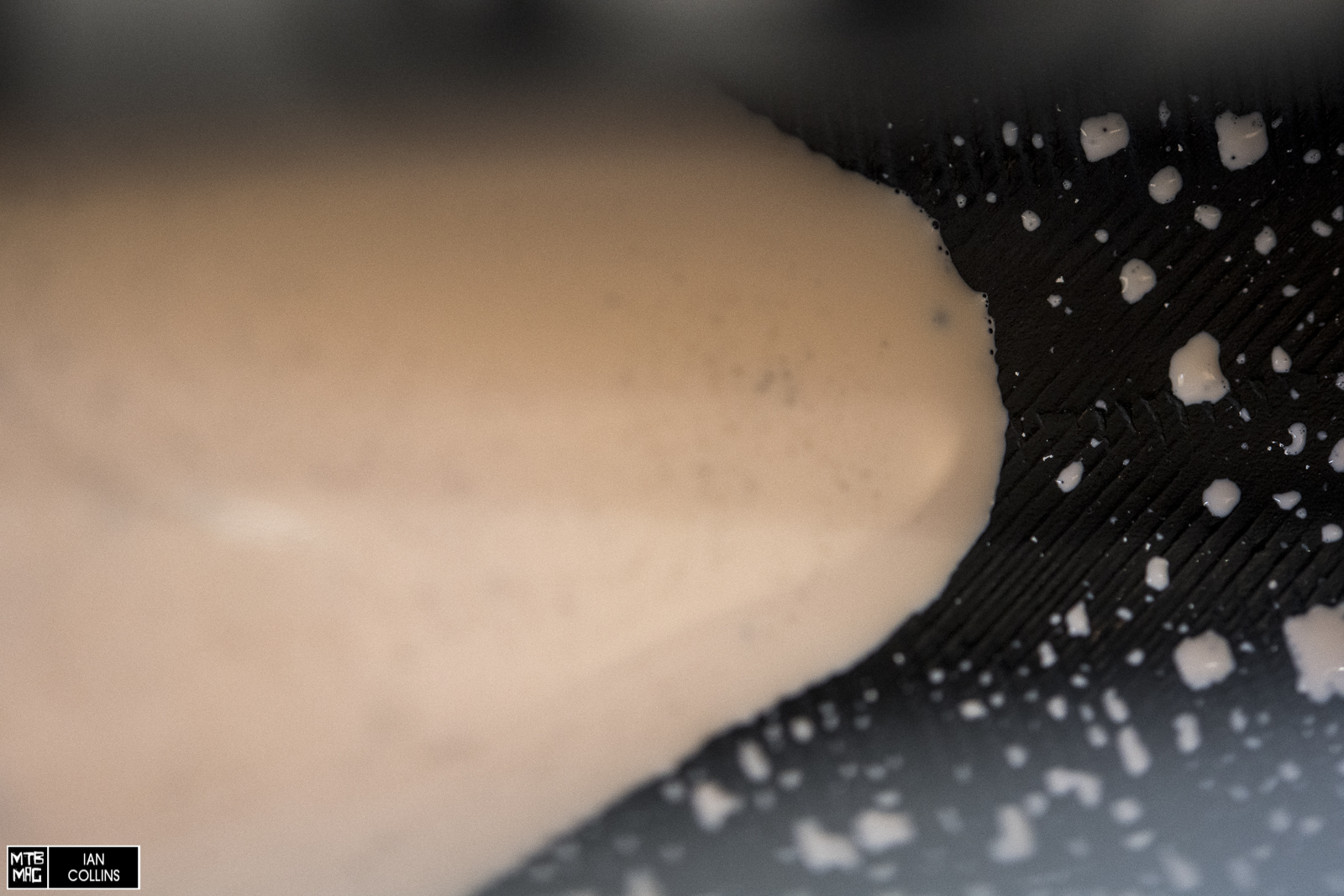 When you first pour in the 4 ounces of recommended fluid (for 29″ wheels), you’ll notice that it slides around nicely and doesn’t really stick to the inside of the tire – more on that later… 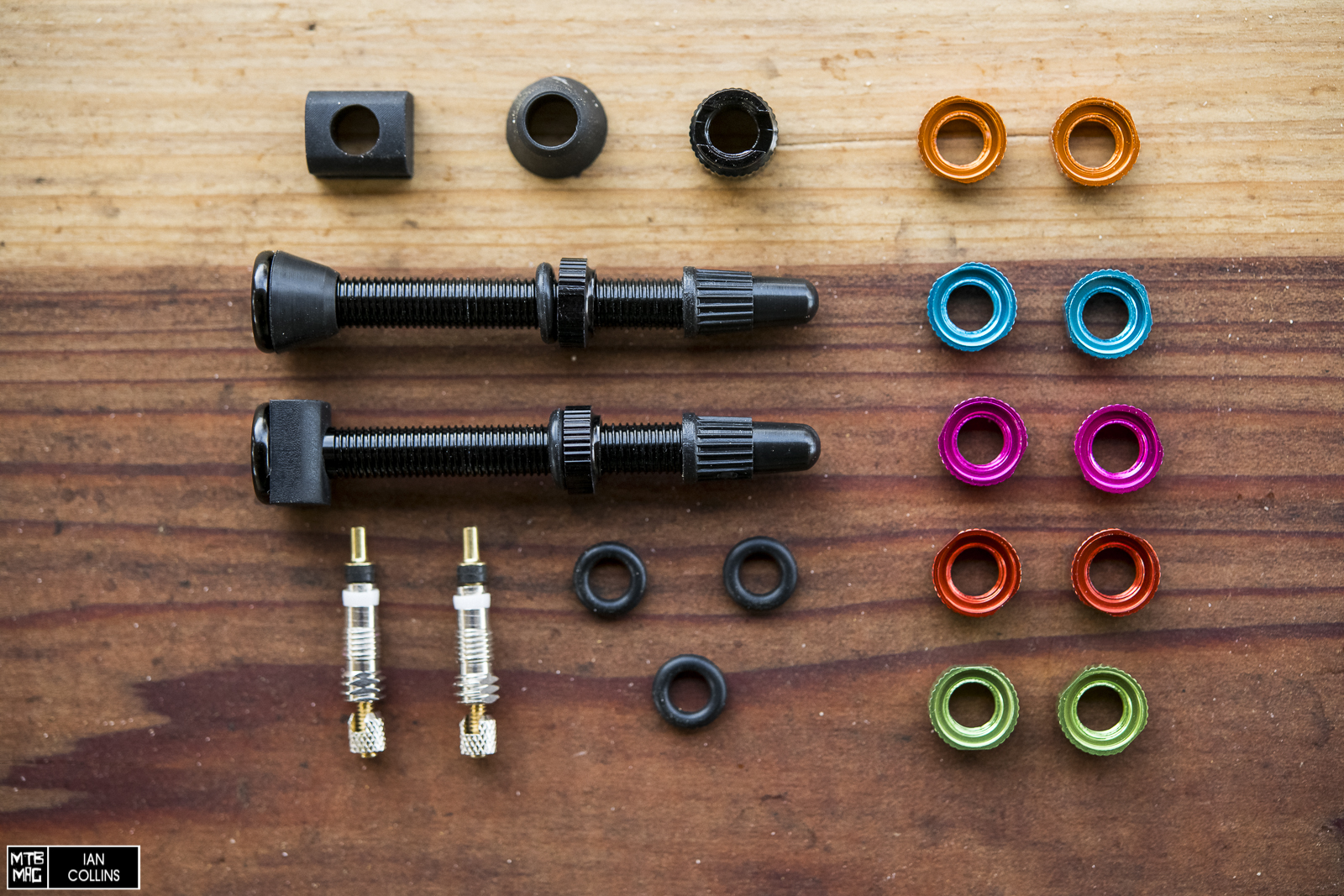 The $23.99 valve kit comes in four lengths: 32mm, 48mm, 60mm, 80mm. It includes two valves, a pair of conical and rectangular grommets (for varying rim profiles) as well as two spare valve cores and a valve core tool. If you hadn’t noticed from the photo above, there are six different included colors for the locknuts. The locknuts also have two flat sides and knurling so you can snug them with your hands and/or a wrench as well.

I’ve actually had the Regular sealant, which has the shortest life of 30-45 days, in one set of tires for over 2 months at this point. I haven’t had any issues with it drying up or seeming like it won’t do a good job of sealing. With that said, after some time I pulled the tire off and found a very, very thin layer had bonded to the inside of the tire. It is easy, but time consuming to pull it off – then again, if you plan on simply pouring out old fluid and refreshing, then you may as well leave it. One nice bonus was that it didn’t adhere to the inside of my rim or rim tape, so there was nothing stuck to the wheel itself. 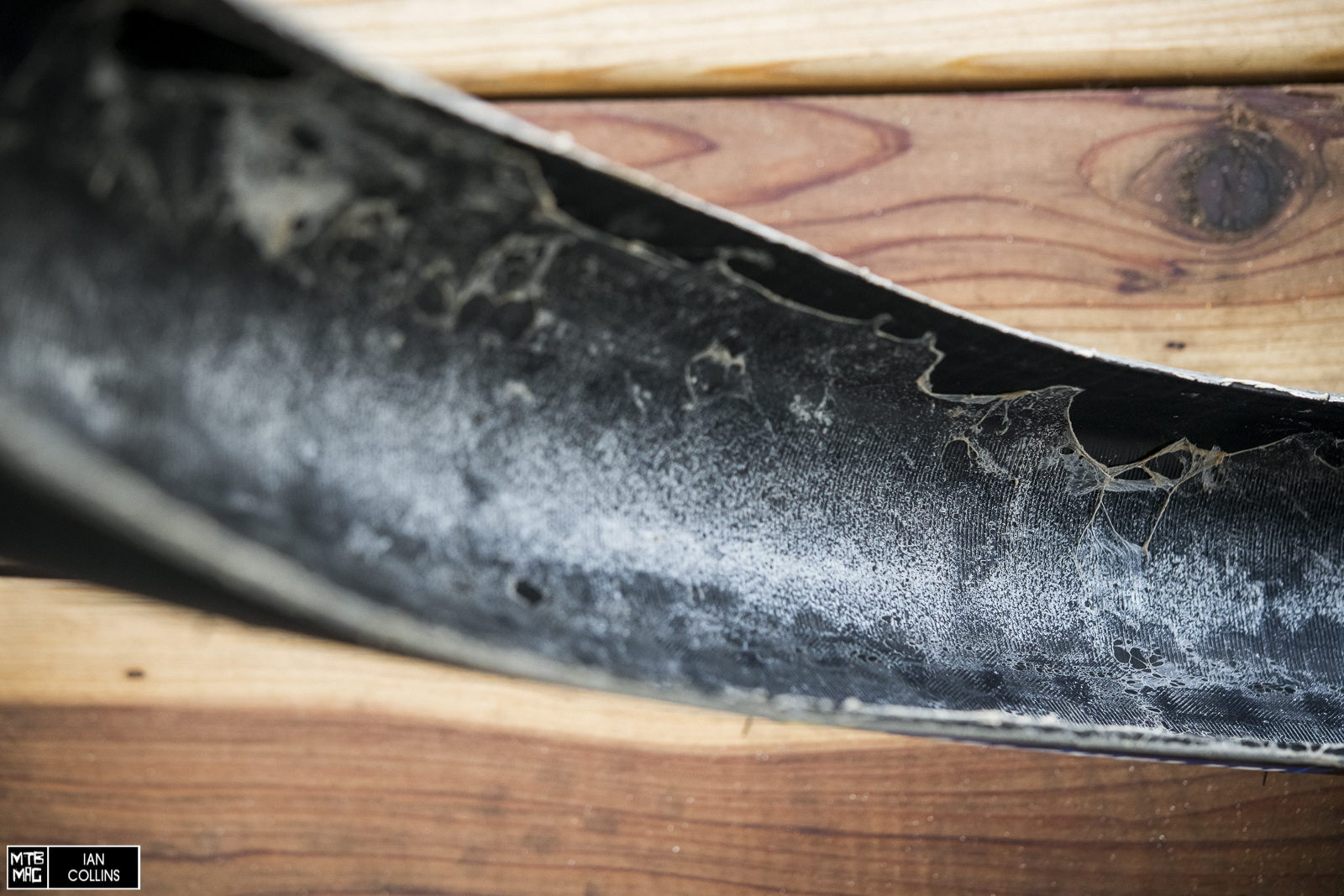 During my time of testing, I didn’t flat once organically, but I rarely flat – roughly once every two years on average. Part of this is because I tend to ride light on the bike and I don’t really like to push my tire pressure down too low as it begins to feel unsupportive to me anyway. In the interest of testing however, I did use a steak knife to jab a quick, small hole in the sidewall of an old tire to see how the Orange Seal performed. After a couple of spins of the wheel it sealed up just fine. For the sake of reference, the hole was about 1/3″ wide. After waiting a few minutes I was able to air the tire up to trail pressure (mid 20’s PSI) and ride it a bit with no issues. In the time I’ve been using the valves they’ve managed to do a fine job. Like most valves however the cores will inevitably gunk up with sealant and as standard you can pick it out with a pin for a while to keep things flowing. The fact that Orange Seal includes extra valve cores is quite nice. The valve tool, which can be stashed on the stem and the different shaped grommets are a nice touch as well.

My final verdict is that Orange Seal’s Regular formulation does a good job and seems to outlive its rather short claimed lifespan, at least by a few weeks anyway. I like their approach of offering varying formulas and selling the fluid in a breadth of different volumes. It’s difficult to conduct tests that will perfectly emulate real life scenarios on trail, but Orange Seal seems to be up to the task and it doesn’t leave gobs of heavy material lining your tire, unlike some other brands. Nor does it leave balls of material bouncing around inside of your tire as it starts to dry. Their valve kit, with its many sizes and included custom color rings, plus spare bits is tough to beat for the money as well.