With test bikes coming in and out rather frequently lately, I’ve generally been more inclined to ride lock-on grips, largely for practicality and convenience during installation/removal. Prior to the Sensus Lite grip coming out, the Renthal Kevlar compound Push-On grip was my go to. Since I ride with my hands out on the end of the bar, I prefer single clamps when I use a lock on as they don’t leave the butt of my palm resting on metal. Last year, Renthal released an Ultra Tacky grip, and while the compound appealed, the two-clamp design didn’t. A few months ago, they introduced their classic push-on grip in the ultra tacky compound and unsurprisingly, here it is, on test. 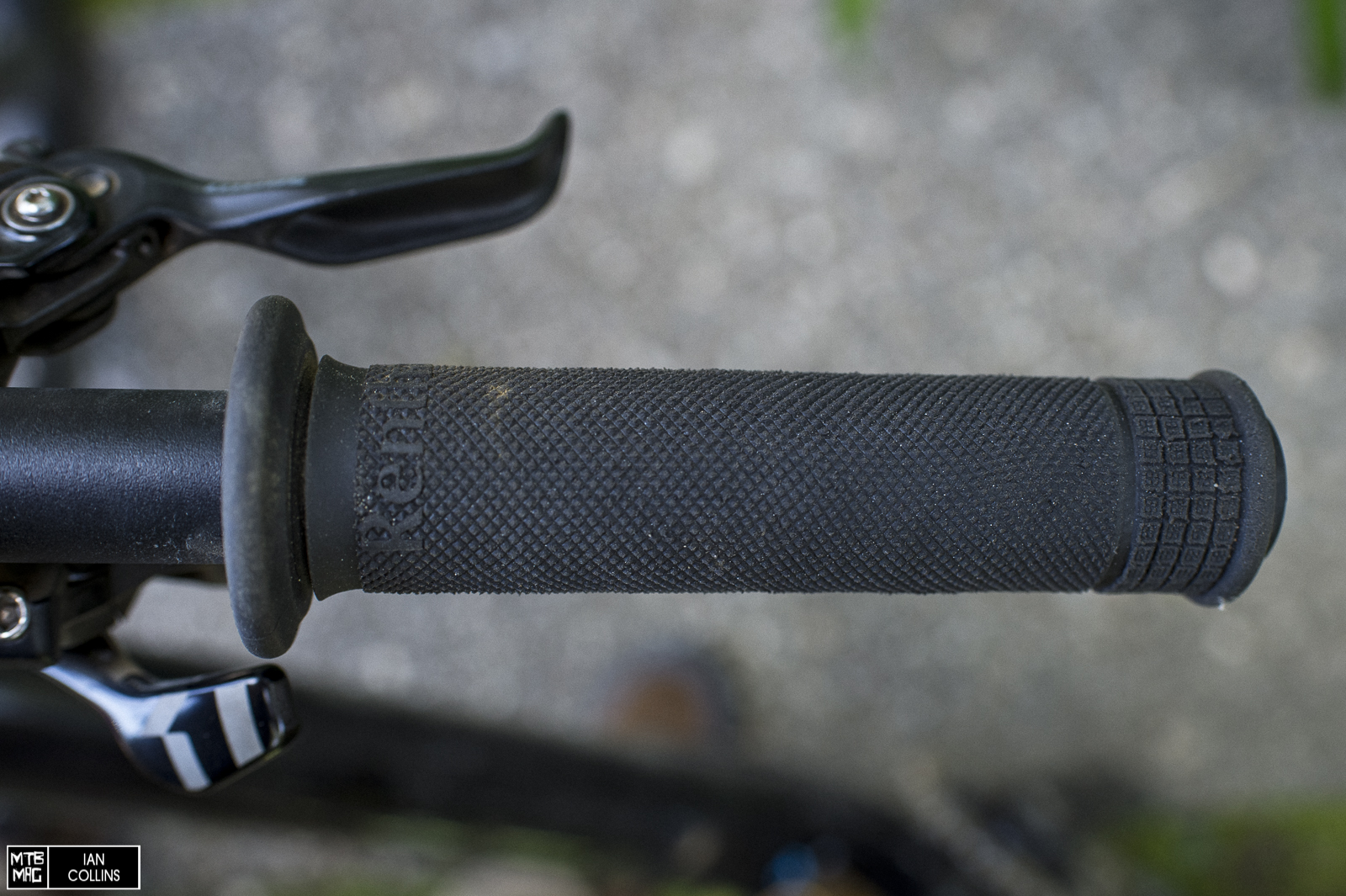 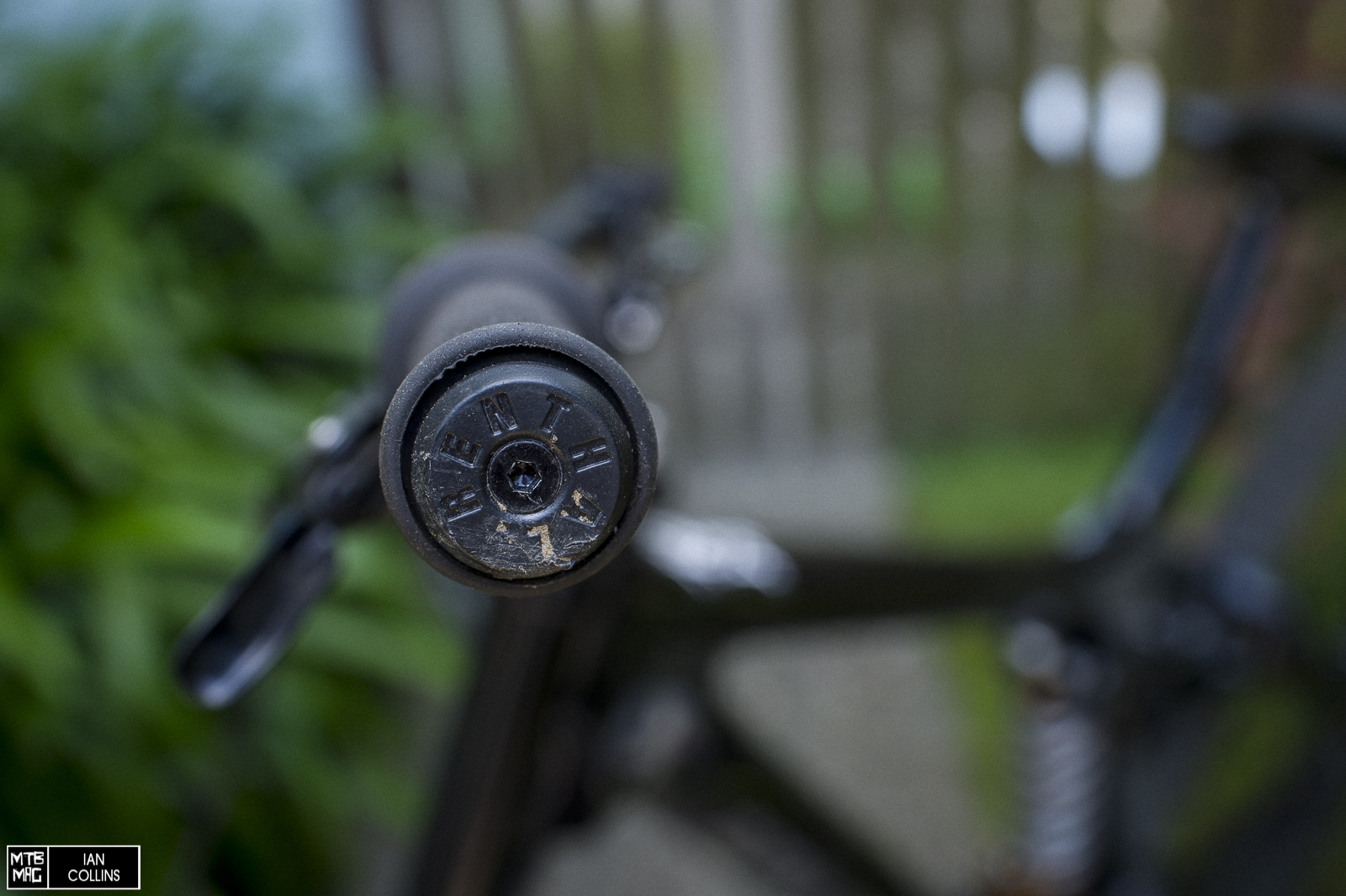 In the absence of a built in end cap or closed off clamp, the Push-On grips use a plastic end cap that secures with a 3mm allen key that expands the cap inside the bar. Renthal brought the diameter down a bit, compared to past offerings. This is a warm welcome for riders like myself who tend to have their hands out at the end of the handlebar. 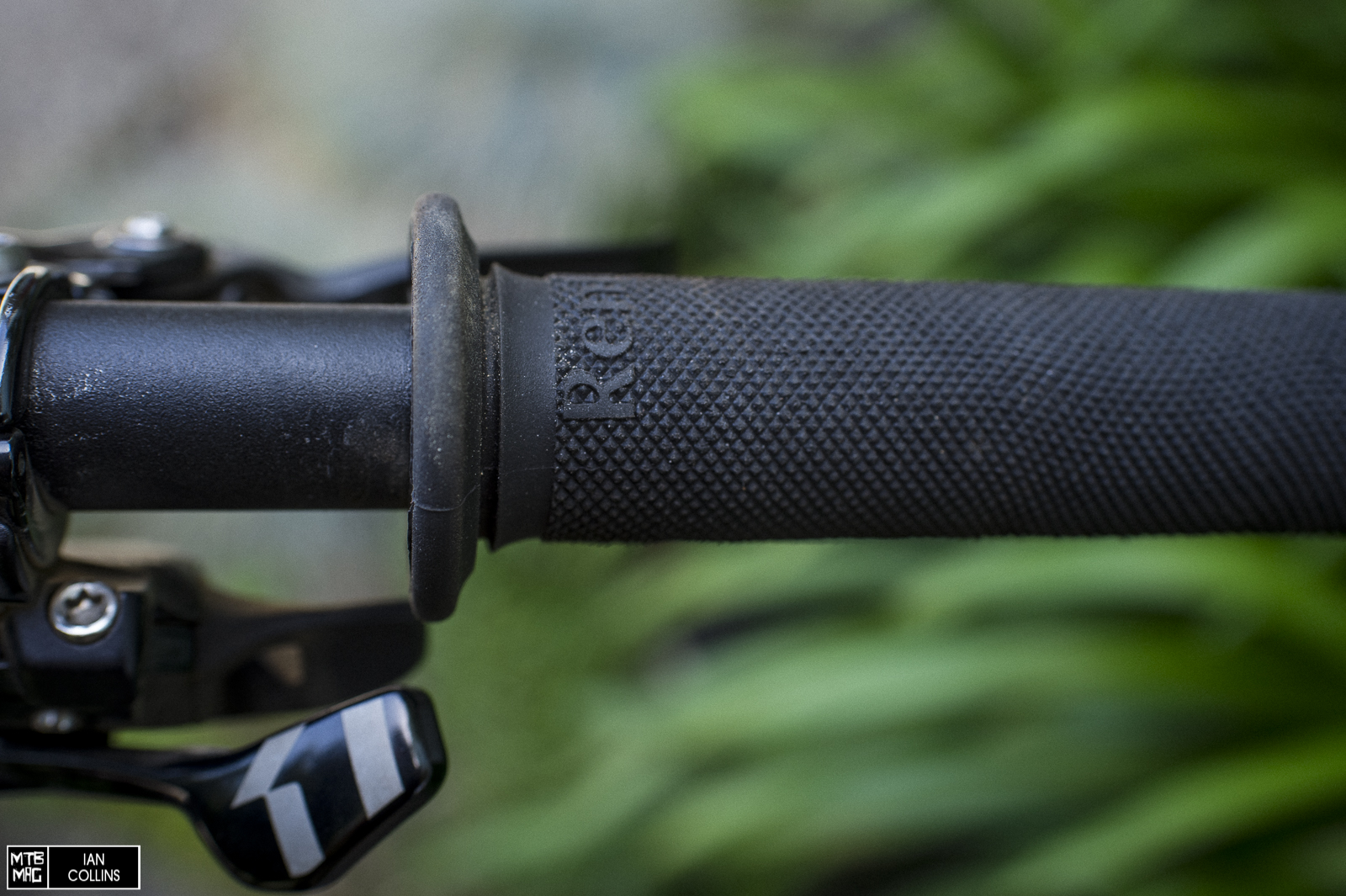 The rather thin 29mm diameter and diamond shaped nubs will appeal to anyone one who likes a thin, minimalist grip. The inboard flange is motocross inspired, but is discreet enough that it doesn’t get in the way of your shifter and won’t need to be trimmed. 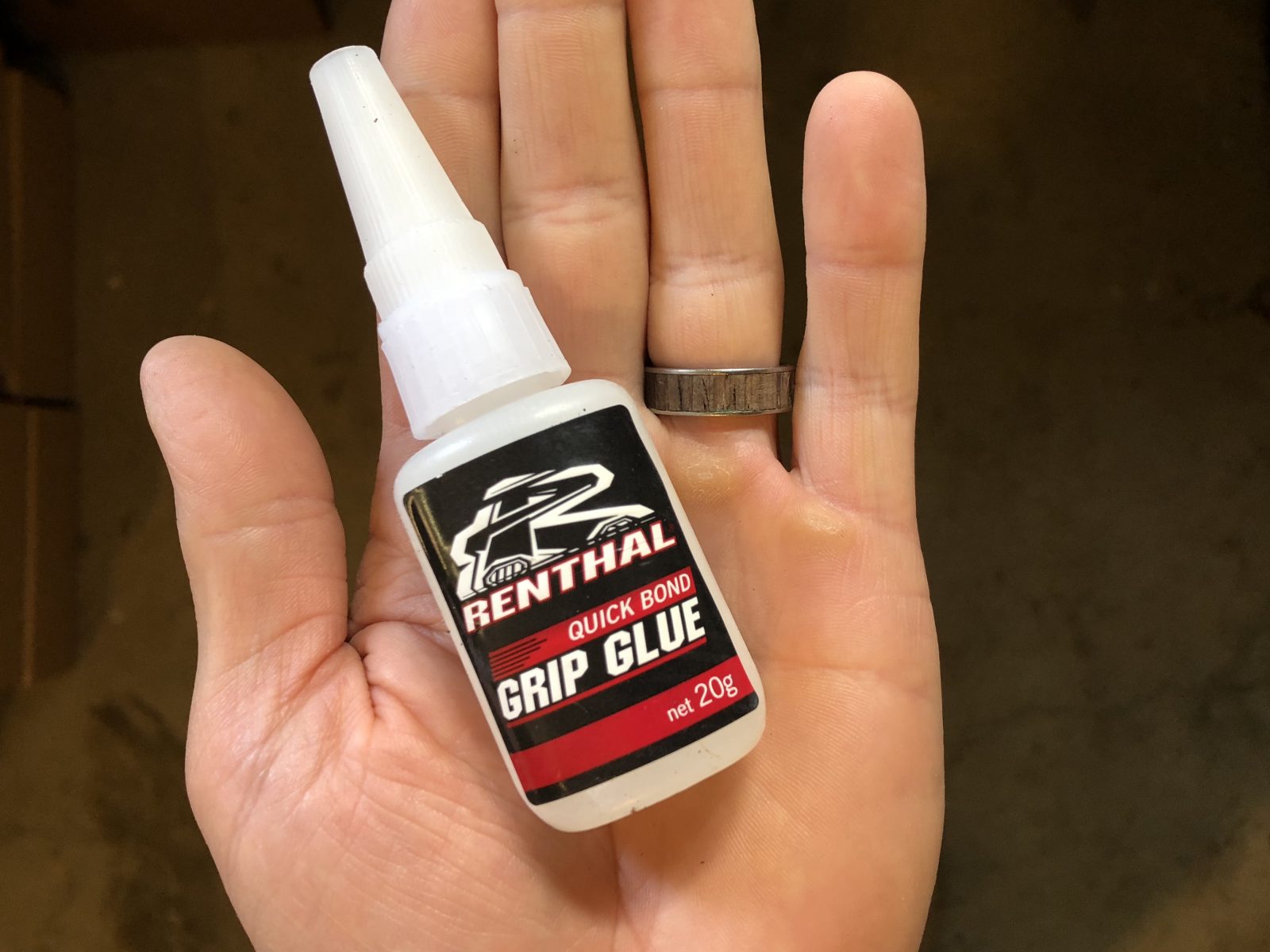 Renthal sells grip glue which, in my opinion, is a must have for their Push On grips. I have to admit, in the past I didn’t apply it liberally enough (with the Kevlar Push-On), and it wasn’t as effective as it could have been. Basically, if you need to get get the glue all over the bar and the inside of the grip, slide the grip on and then do a few full rotations where you twist the grip like a throttle. You’ll have to work fast and be ready to clean up the excess glue. 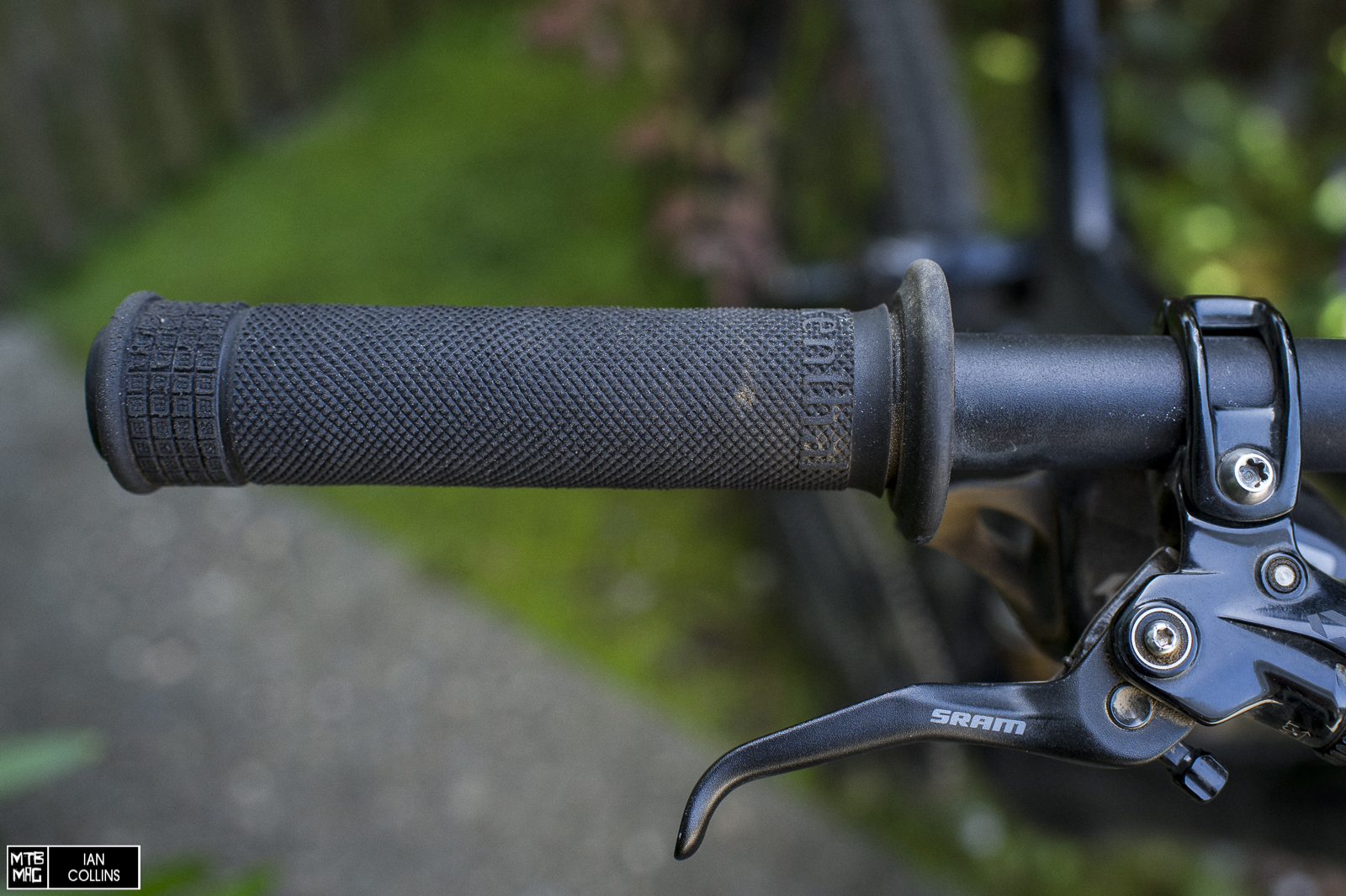 You can see 2 grooves, in case you’re inclined to wire tie your grips on – one inboard, and one out toward the end of the bar. Hairspray and spray paint are other options if you don’t want to use glue and/or wires.

At first, these grips almost felt too sticky as they left a slight residue on my hands. If you prefer gloves, you won’t even notice this though. That said, after one DH lap, fortunately the initial residue vanished rather quickly. Once this occurred and I could focus on the feel, I was extremely impressed by just how well they absorbed the small chatter. For some perspective, when I installed the Ultra Tacky grips, I removed a carbon fiber Renthal Fatbar with Sensus Lite grips and swapped for the new aluminum Renthal Fatbar. Surprisingly, I felt much less feedback in my hands with the more recent setup, despite thinking that I’d be getting beat up a bit by the aluminum bar. 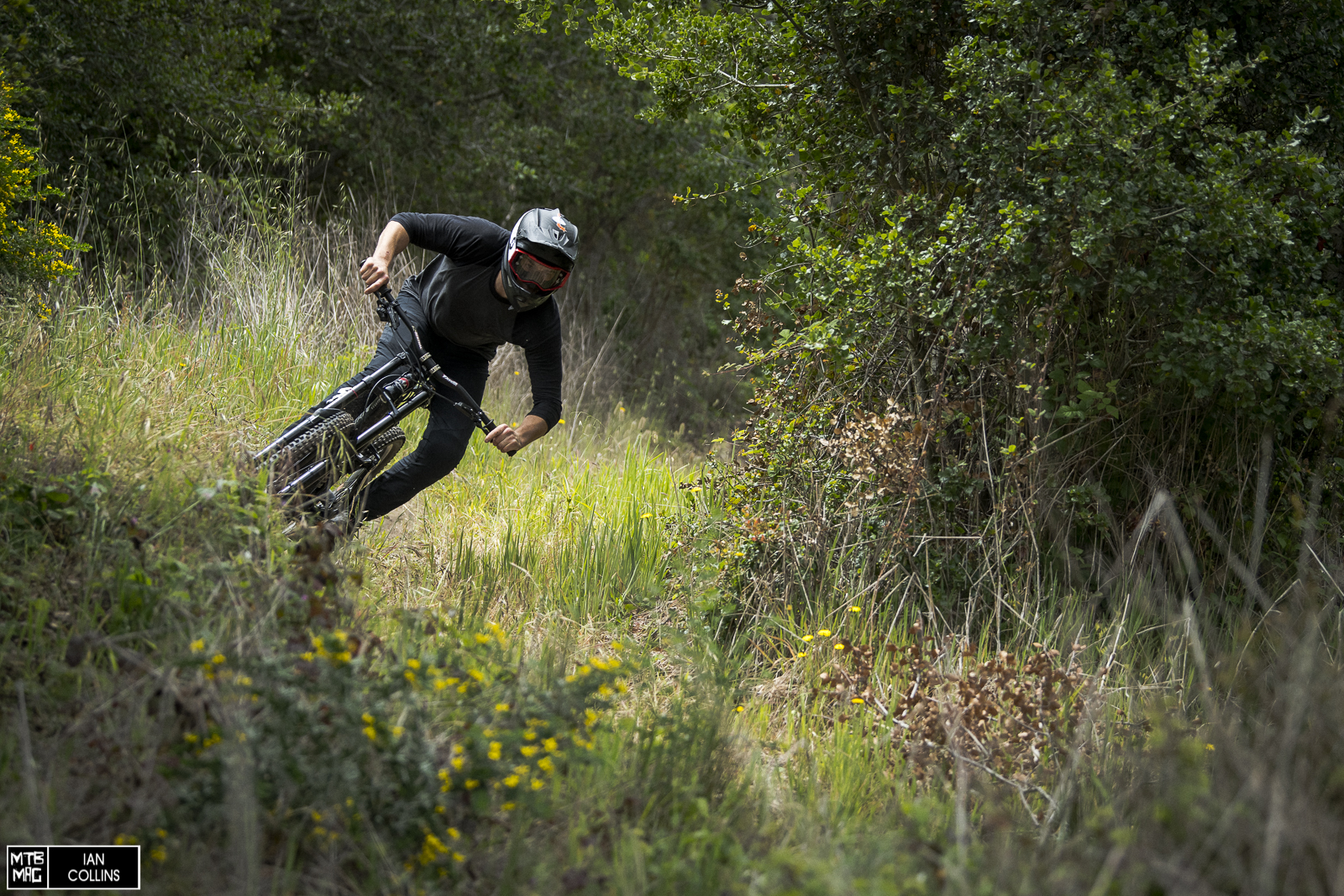 It’s not so often that I get to hammer out a ton of proper downhill laps, but recently I got in some solid descending in a short amount of time, something that would normally leave my hands completely fried, red and callused. Much to my surprise and delight however, my hands were totally fresh after two full days of bike park laps. I typically ride without gloves and don’t like grips with overbearing patterns, so it’s not a huge surprise that I got along with the uber minimalist Ultra Tacky Push-On from a design standpoint. The shape is great and all, but what’s most impressive is the compound itself. I rode them in very hot conditions where my hands were sweating to the point that I’d typically cave in and throw some gloves on, but, I never felt the need to. As far as durability goes, Renthal rates the Ultra Tacky as a 3/5 stars, where the Kevlar grip is firmer but receives 5/5 stars. Personally though, I don’t think these grips are wearing out at an unreasonably fast rate, especially given how soft they are.

Renthal hit the nail on the head with this grip, especially with regard to the compound. If you’re a die hard lock-on fan, you may to look elsewhere, particularly if you prefer thicker grips or crazy patterns. However, part of the reason the Ultra Tacky Push-On is so comfortable and absorbent, despite being so thin, is that unlike a lock-on grip, it doesn’t require an internal hard plastic sleeve to allow it to slide on and off. That buys it a couple of additional, precious millimeters of cushion, while still allowing it to be quite thin at 29mm. Personally, looking past the inconvenience of dealing with glue and a permanent installation, this is unquestionably my new favorite grip.

Exploring in the Slovenian Alps