When RockShox re-launched the Pike a couple of years back, it was a game changer.  It was the gold standard mid travel fork in the early years of “enduro” bikes.  Technology quickly got better, others started to figure it out and the time came for RockShox to up the ante with a beefier single crown answer to increased demands as riders began to push the aforementioned bikes harder.  Enter the rebirth of another classic : The Lyrik… 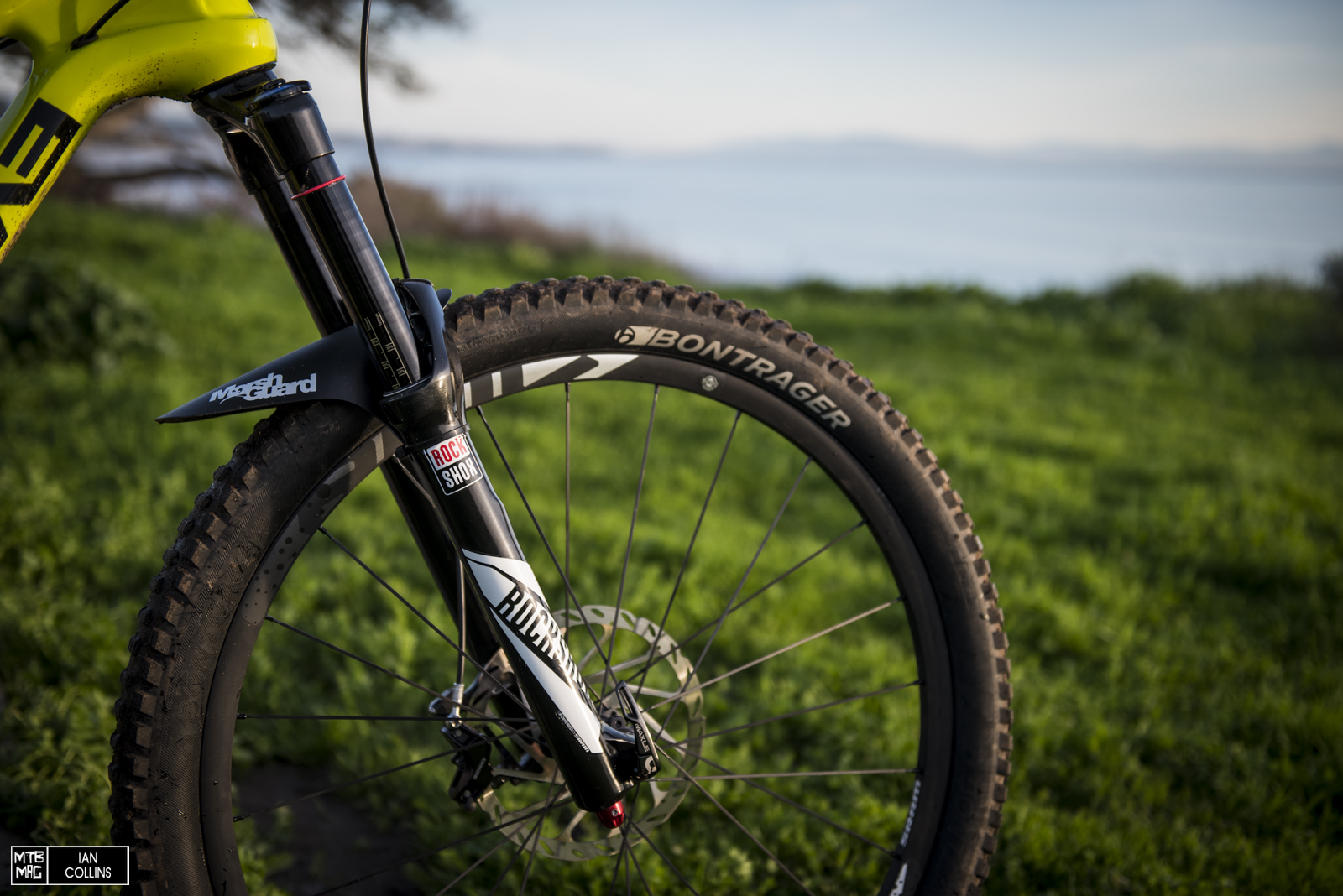 On first glance, the Lyrik won’t strike you as a vastly different fork than the Pike, and in reality it isn’t a huge departure.  Subtle chassis reinforcements and internal refinements are abundant however, and it’s the sum of the parts that make the Lyrik behave quite a bit differently on trail, all while having similar DNA to the Pike.

There are so many changes that we almost don’t know where to begin.  We may as well start with the ones that might fly under the radar.  RockShox now utilize high grade SKF seals in the lower leg assembly as well as the Charger damper. Without droning on too extensively, SKF basically do a better job at sealing fluid, last longer and are incredibly devoid of stiction.  All of these characteristics provide a better ride. 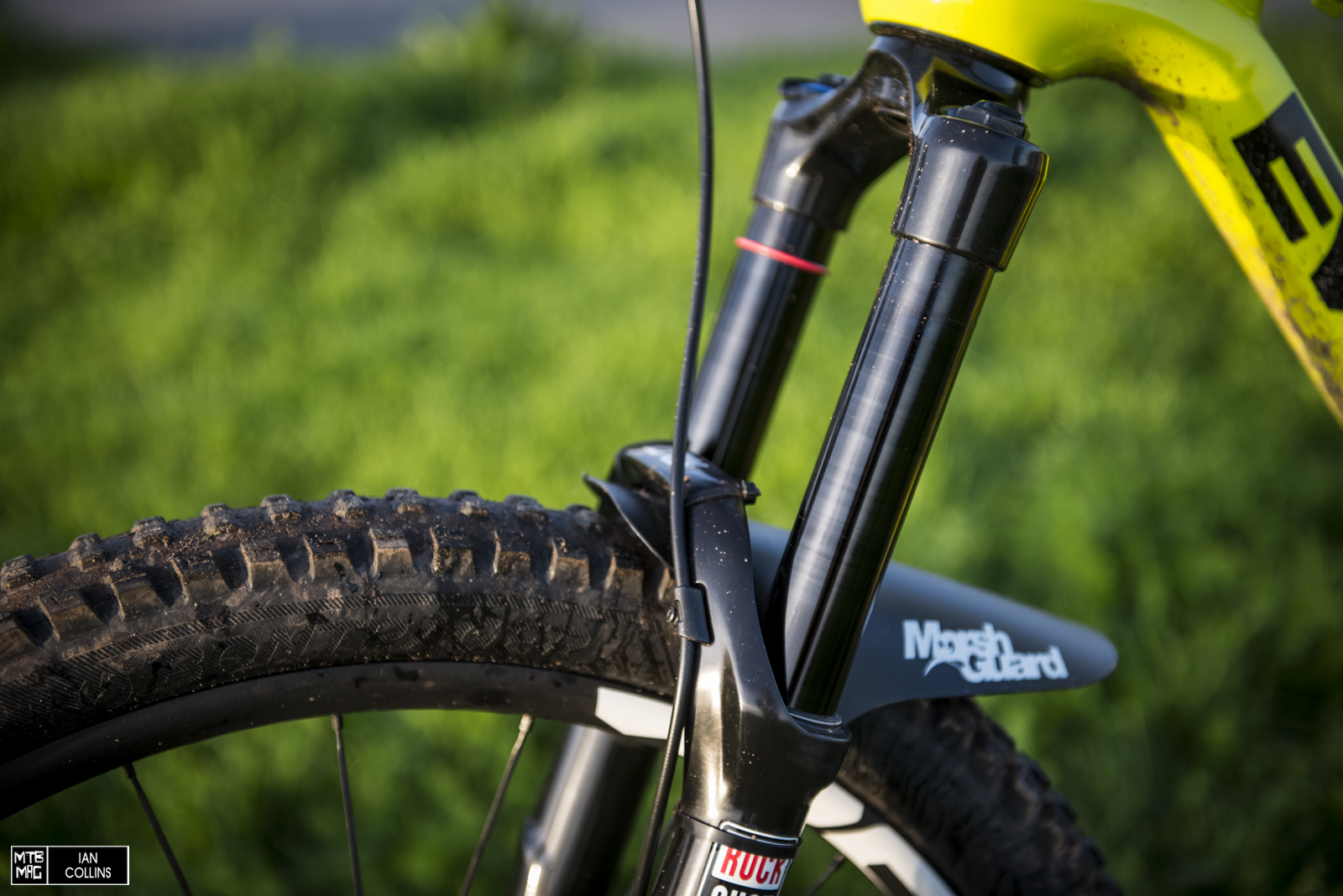 Moving on to the next update that’s hidden within the fork, the SoloAir spring has been updated. This is likely responsible for the biggest refinement to ride quality.  In short, the negative spring volume has been increased substantially. The added volume encourages the fork’s action to be incredibly light and more sensitive in its travel. A relocated transfer port also helps facilitate better balance between the positive and negative springs.

One big change for 2016 is the option to use Bottomless Tokens in their Dual Position Air Lyriks. This gives users the option to change the spring’s curve and offers endless adjustment ranging from a linear to a highly progressive feel.   It should be noted that this has never been an option before, thus riders on Dual Position Air had less tuning options at their fingertips in the past. The Solo Air Pike and Lyrik that we tested already have this option but for those interested, it’s a great reason to revisit the adjustable travel RockShox models; especially those with longer travel 170mm and 180mm options that raise the front end substantially. The option to knock your fork’s travel down by up to 30mm will put you in a much better climbing position up front. 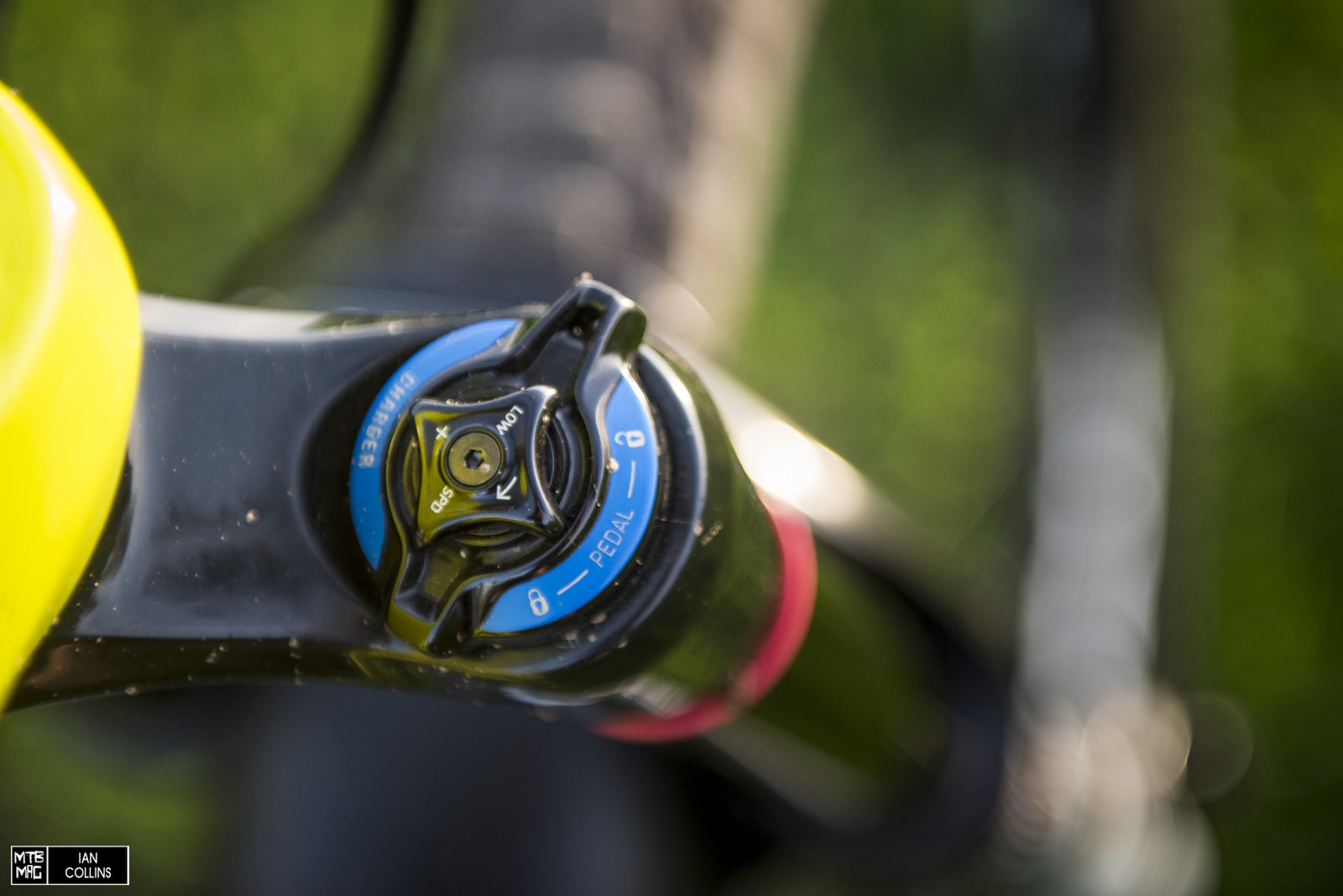 On the damping side, not too much has changed on the fork we tested. The RCT3 fork features the same 3 position “open, pedal, lock” switch and 13 clicks of low speed compression that we loved on the Pike RCT3. The rebound has been updated slightly to offer an internally adjustable shim stack similar to that of a Boxxer. By reconfiguring the stock shims, heavier and more aggressive riders can set up a firmer tune and lighter riders can dial in a lighter tune. It’s a rather simple job if you have the right tools. 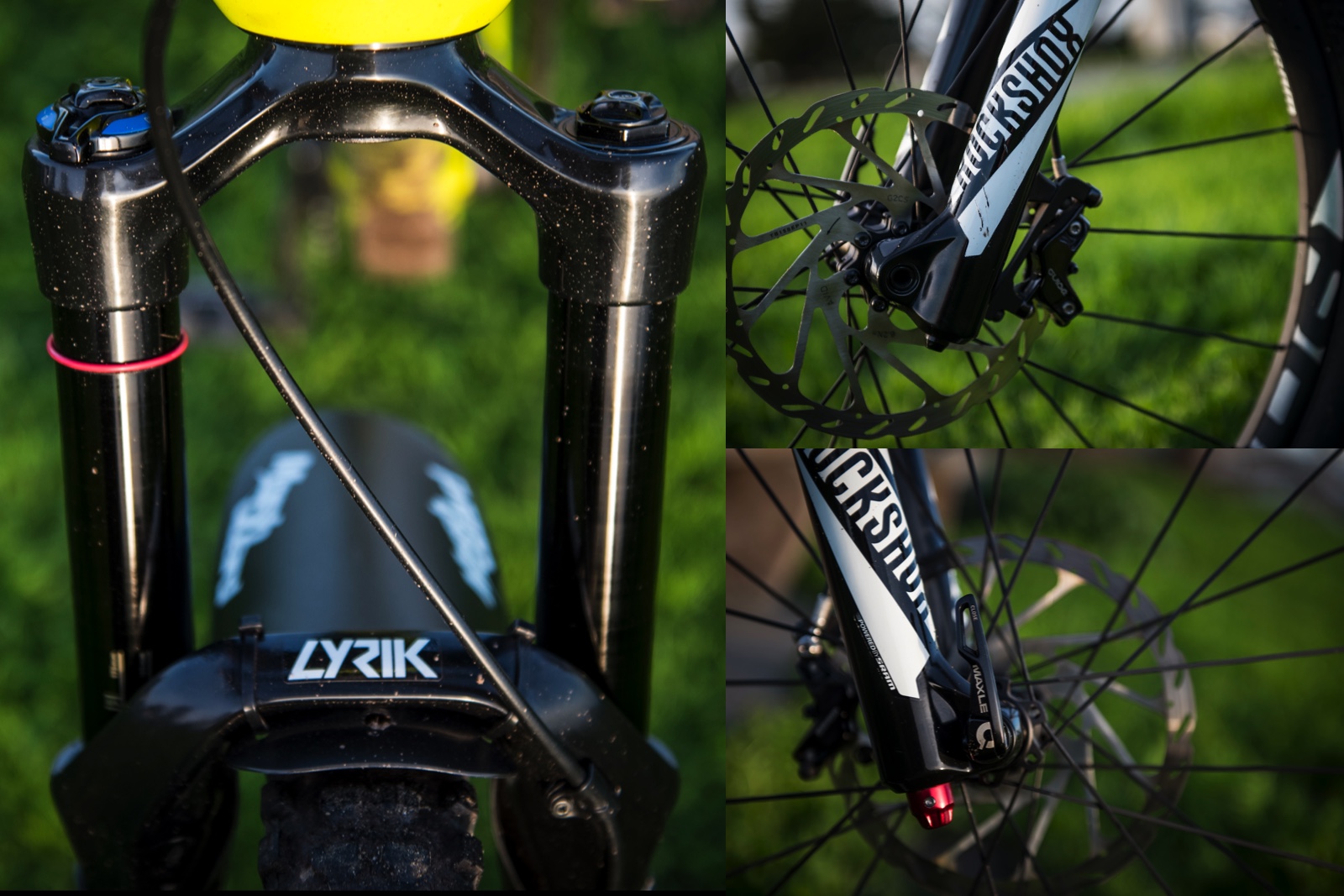 Externally, the chassis receives a plethora of updates which provide a bit more strength and rigidity compared to the Pike. After a quick glance around, you’ll notice the beefed up dropouts on the stouter, updated lowers with a new forging that allows the stanchions to run a bit deeper past the front axle. This allows RockShox to keep the fork height relatively low with the longer travel models. 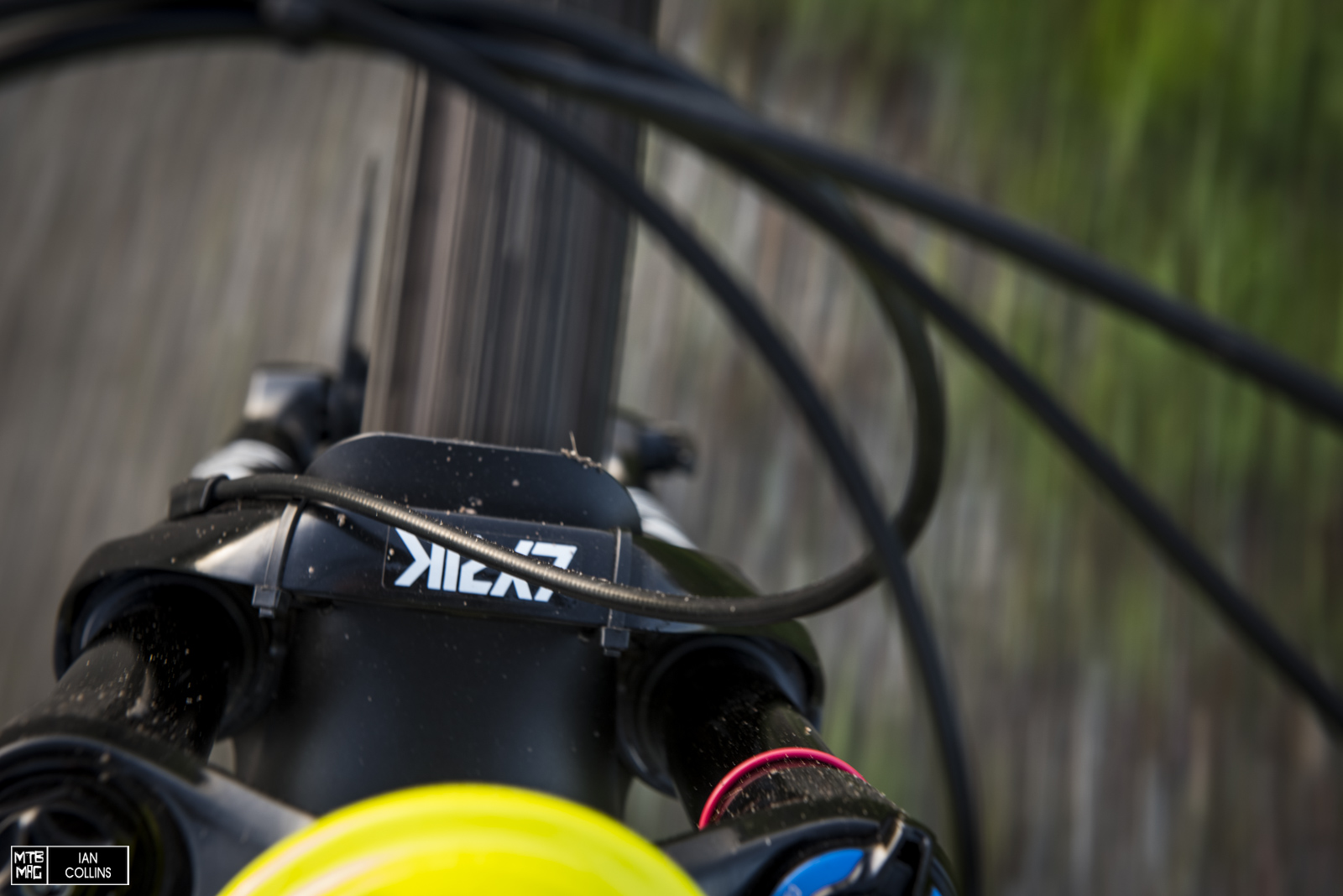 A much beefier brake arch is very noticeable straight away. When the Lyrik first launched we were a bit surprised that RockShox decided to forgo 36mm stanchions. Instead, they stuck with the existing tapered 35mm tubeset which has proven its worth on the Pike. The last measure taken to make the Lyrik a brawnier big brother to the Pike is the addition of Torque Caps. On most SRAM wheelsets, you can pop these onto the hub’s axle. In doing so, the outer diameter of the cap measures about 30mm and nestles into a shoulder in the fork’s lowers. In a sense, the increased surface area between the hub and lower leg assembly should help combat twisting near the axle and stiffen things up around the hub.  While SRAM is currently the only wheel manufacturer making Torque Caps, other hub/wheel makers may follow suit and offer them in the future.  We’d love to see them on third party wheels. ** Edit : Great news, we’ve recently been informed that Industry Nine is now offering Torque Caps for their wheels.**

OK, enough of the techy talk.  Let’s see if all of these long winded updates translated to a better fork, or at least a burlier one meant for tackling gnarlier terrain…That’s what it’s all about anyway, right? 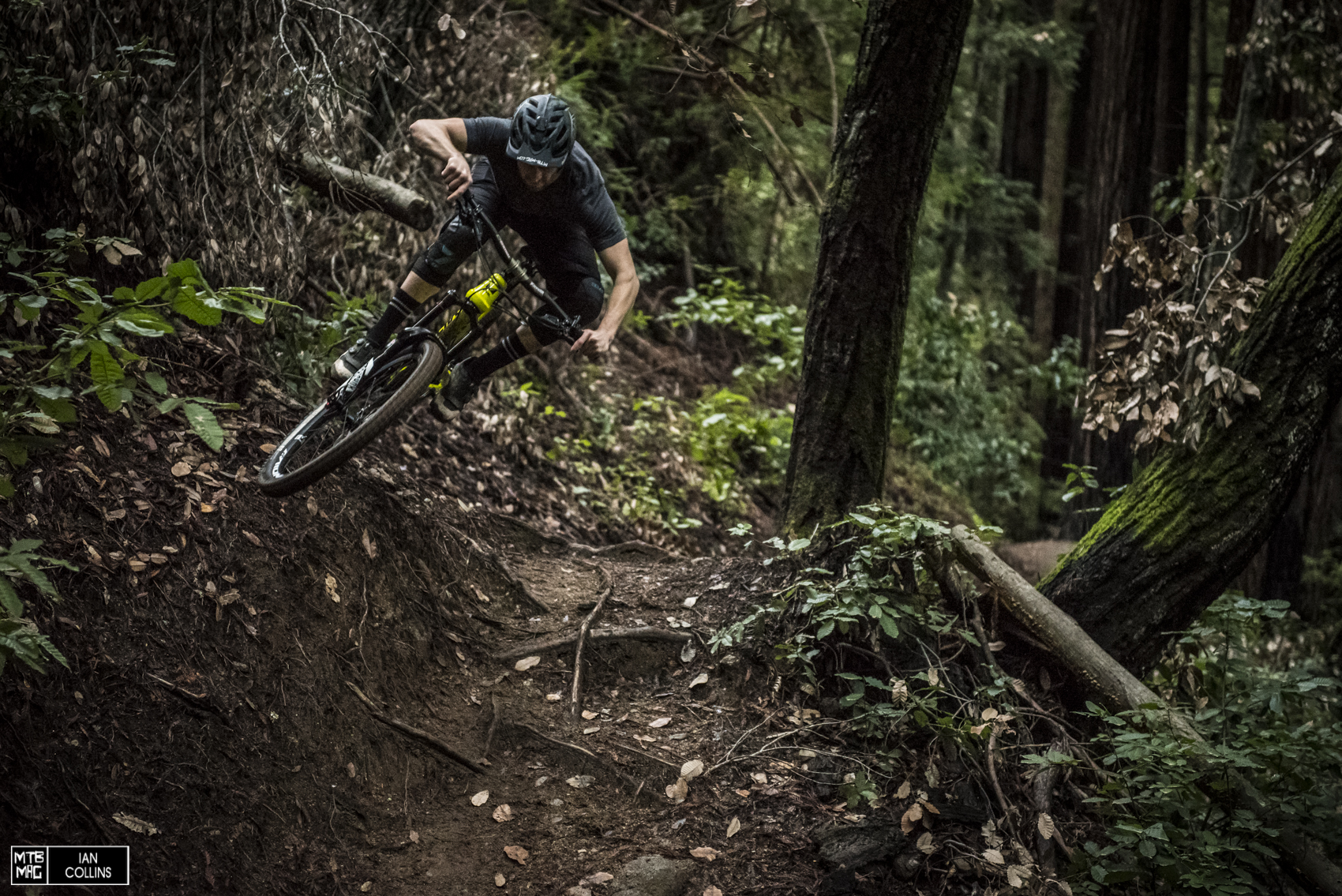 Straight away, the Lyrik felt just as nimble and light on its feet as the Pike. All of the updates only translate to a weight increase of just a touch over 1/4 pound, so to be honest we didn’t notice that it was any harder to toss around.  In terms of ride quality we immediately noticed how light the action was off the top. The Lyrik is possibly the smoothest fork we’ve felt to date. Our 185 pound test rider set his fork up as follows :

The suspension action offered by the Lyrik is much like the Pike’s only a bit more refined in the beginning and smoother throughout. This is likely due to the SKF seals in combination with a chassis that’s a bit less twisty, resulting in less binding at the bushings.  That  rigidity provides smoother tracking and more traction. That’s not to say that the Pike is flexy; it just doesn’t stack up quite like the Lyrik when things get really rowdy. 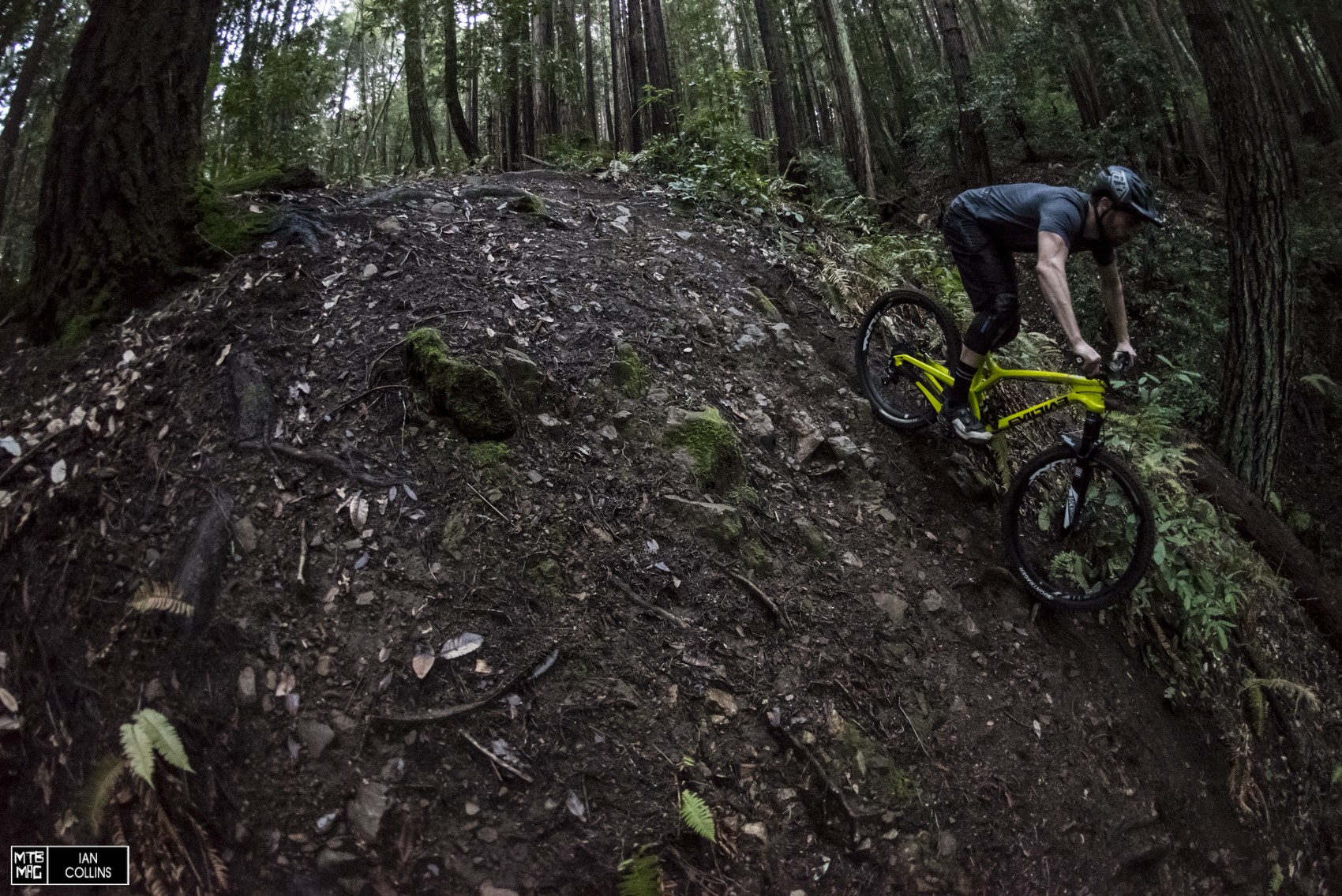 The characteristic of the Lyrik that resonated most with us is its mid stroke support and bottom out resistance. The fork is very well composed – it doesn’t bob or dive  excessively when set up correctly. It sits up in the travel nicely. When you slap a turn or try to squash the lip of the jump, it doesn’t blow through the travel. We used all of the travel a few times but our wrists thanked us when we didn’t experience a jarring bottom out.

As far as handling is concerned, we were super impressed. Like the internals, the Lyrik’s chassis also sees a dramatic improvement due to the sum of its parts. The Lyrik takes the platform that made Pike so successful and simply built upon it. After all,”If it ain’t broke, don’t fix it…” We found excellent steering precision in the beefed up, re-shaped lowers.

When some consumers first caught wind of the new Lyrik, there was a bit of moaning about its lack of a 20mm axle and 36mm stanchions.  While those initial concerns aren’t unfounded, after a few months of very heavy, aggressive use we’re happy to report that neither of those things are necessary to make a stellar fork catered to the aggressive mid travel crowd. If your riding consists more of bike parks and steeper, rockier terrain than it does mellow, meandering singletrack, the choice is clear… 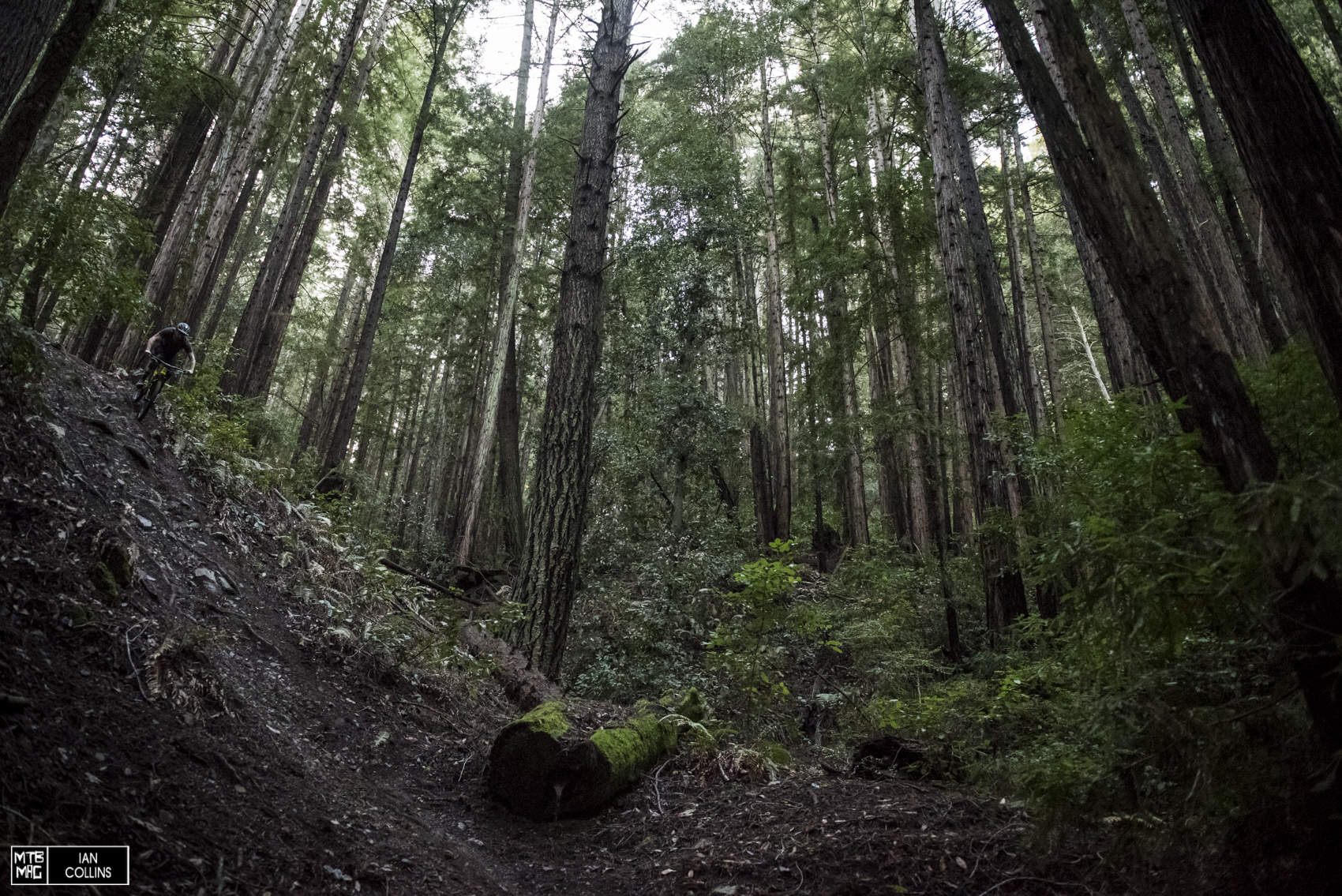 In situations where the Pike left us wanting just a bit more, the Lyrik had us confidently charging harder. If you frequently ride aggressive terrain that pushes toward DH bike territory, the Lyrik is the fork for you.