SRAM and RockShox made waves in the mountain bike industry when they announced their AXS wireless systems last Spring. Specifically, on the RockShox end of things, this involved the abandonment of a cable (or hose) to activate their Reverb AXS dropper seatposts, with a simple but customizable wireless controller taking its place. A while after the launch, I began long term testing one of the nifty new posts on a personal bike to see how it would fare in the long run… 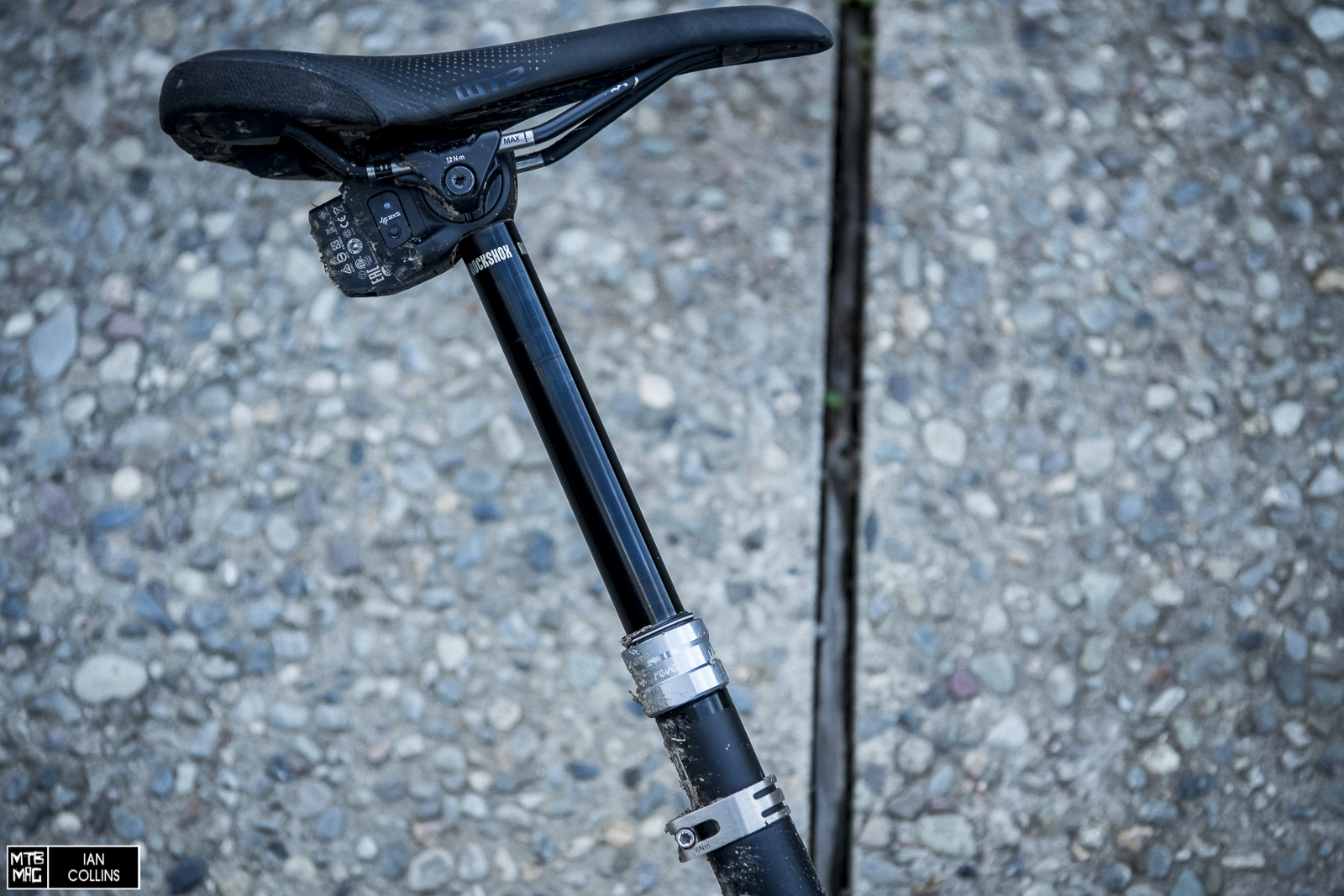 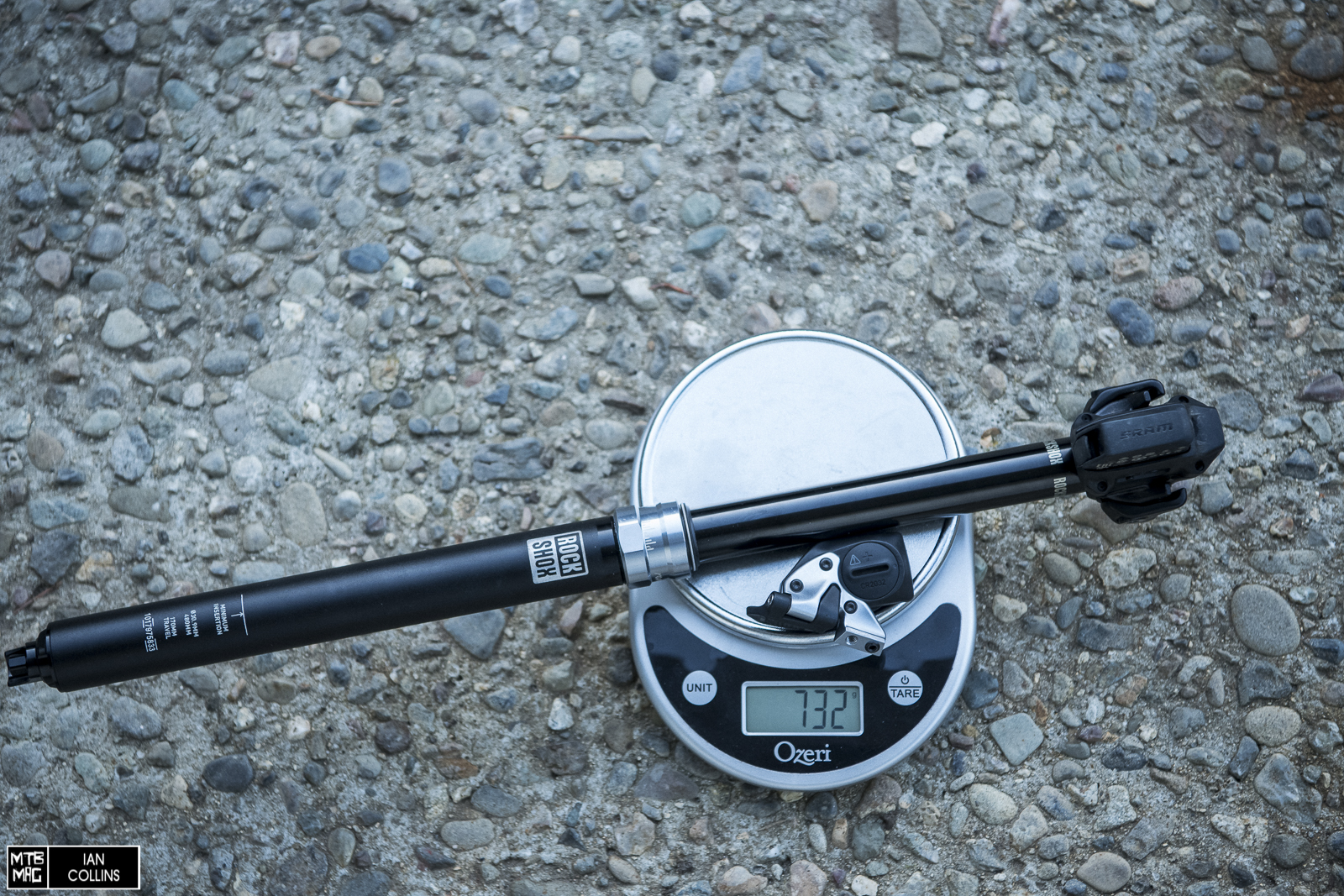 While the Reverb AXS manages to keep its overall length down pretty nicely across the lineup, it appears to be slightly on the heavier side. However, it’s worth keeping in mind the weight of a cable, hose and lever so as not to compare apples to oranges. Once those are factors are considered, things come out in the wash and the weight is pretty middle of the road with some offerings being a few grams lighter and some a few grams heavier. 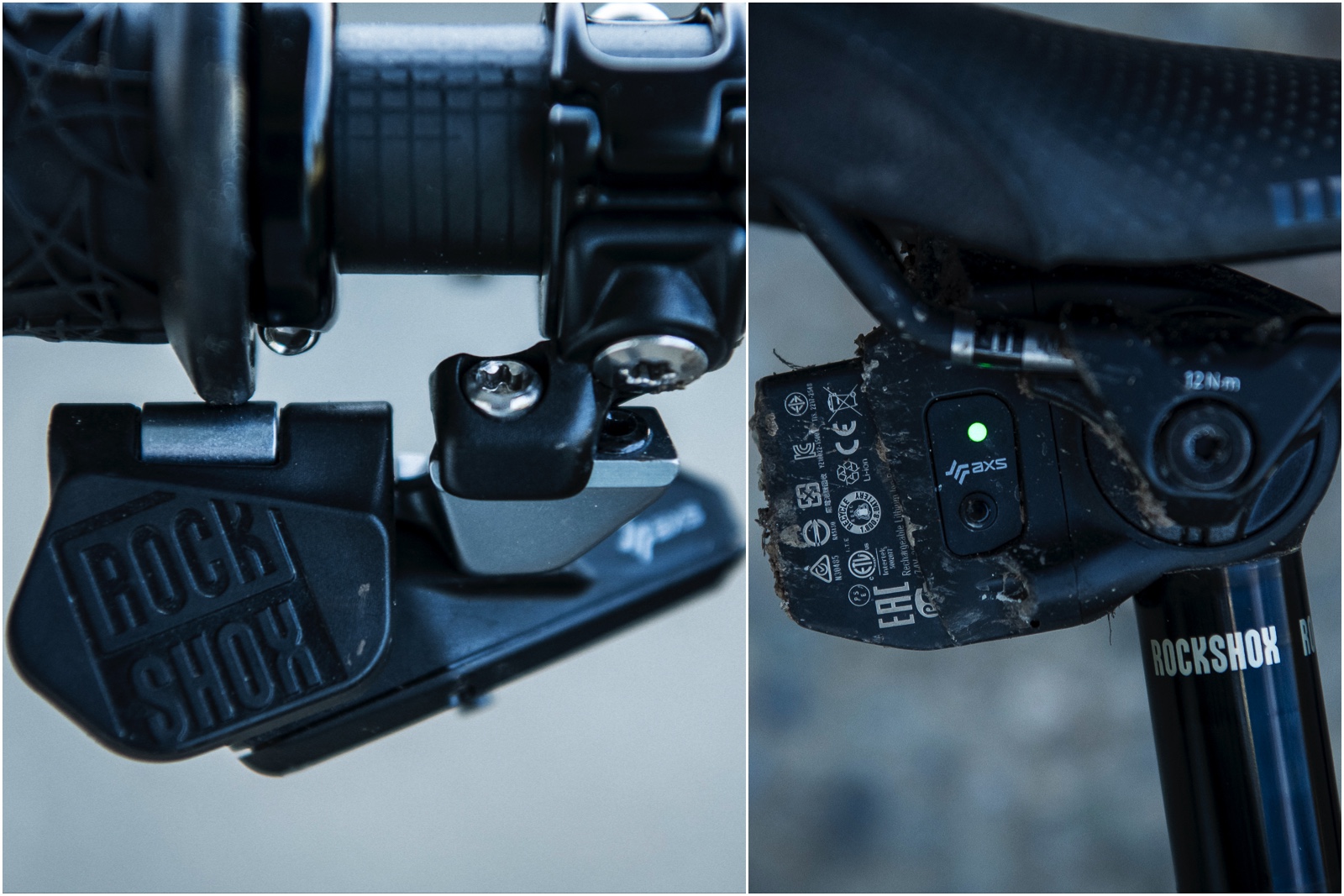 Pictured above is the controller and the seatpost head. Left: pressing the RockShox branded plastic paddle immediately activates the seatpost. Although it ships with its own handlebar clamp, it is Matchmaker compatible and features two inboard/outboard positions. Right: the head has a button (for pairing) and a light, which indicates activation and battery levels via different colors (green and red). 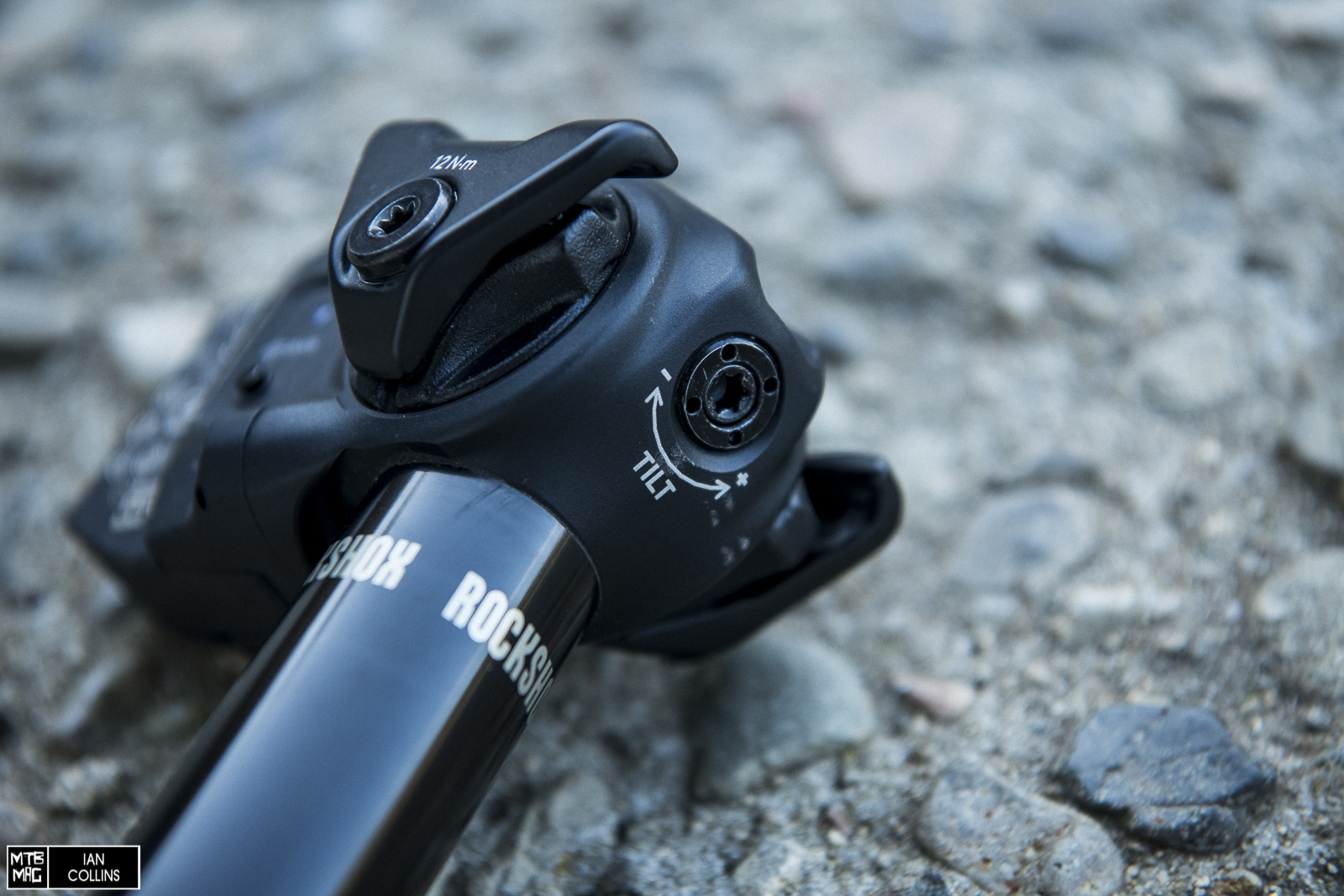 Call me a luddite, but one of the features I was most impressed by on the Reverb AXS is the tilt function. Rail adjustments as well as saddle installation and removal is blazing fast with a single bolt and a few turns. The tilt screw is nice for fine tuning and is equally quick and efficient with a full turn of the T25 screw moving the saddle angle quite a bit. One thing I appreciated about this was that the tilt is set it and forget it – meaning you can take your seat on and off and you won’t have to go through the process of getting the angle “just right” as it will be right where you left it, unlike seatpost clamps which use fore/aft hardware. 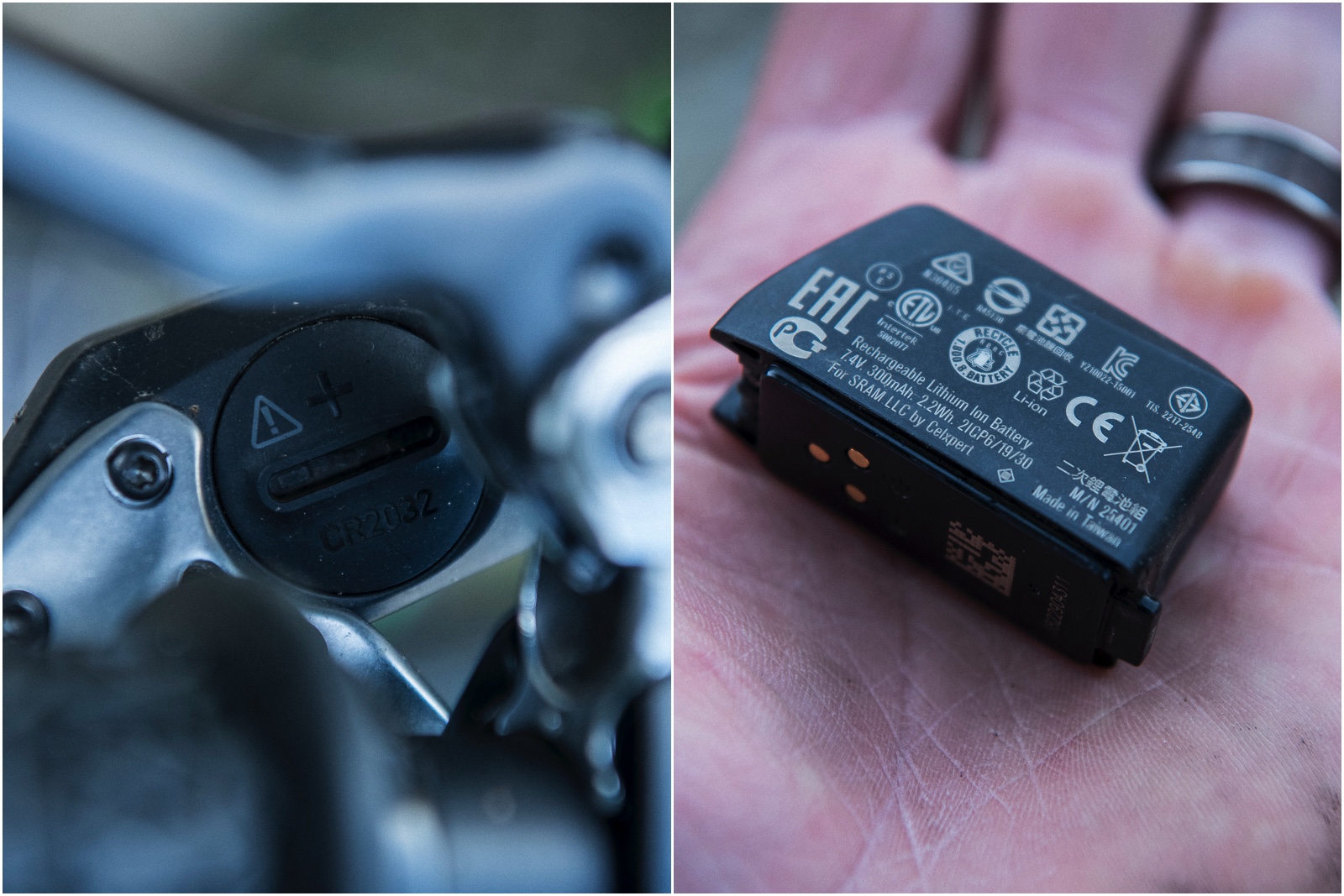 Just like with Eagle AXS, the controller uses a CR2032 battery, which is typically available at your average pharmacy or hardware store. According to SRAM, that battery is good for roughly two years of use and will indicate that it is low on juice with its light. On the seatpost itself, the SRAM/RockShox specific battery is the same across the board for all of their wireless products and weighs just 25 grams.

Starting with installation, it’s almost difficult to overstate how unbelievably satisfying it is to rip the cable out of your frame and kiss it goodbye. The removal of your old post will undoubtedly take longer than the installation of the Reverb AXS. Setup and pairing on SRAM’s smartphone app is quick, intuitive and seamless. It should go without saying – but just to spell it out, you don’t need your phone to use the seatpost day-to-day. As I am long in the limb, I was happy to test the longest travel 170mm version, which comes in at a relatively short 480mm overall length. For what it’s worth, I couldn’t lower the 175mm Fox Transfer seatpost quite far enough on my Evil Offering, so this was a welcome change. As far as ergonomics are concerned, despite looking rather simple with its flat shape, I got along with the controller’s paddle quite well. The fact that it just requires a quick tap is nice – compared to the longer throw required by a standard mechanical post. In fact I got quite spoiled by that and found going back to a normal lever to be rather annoying. 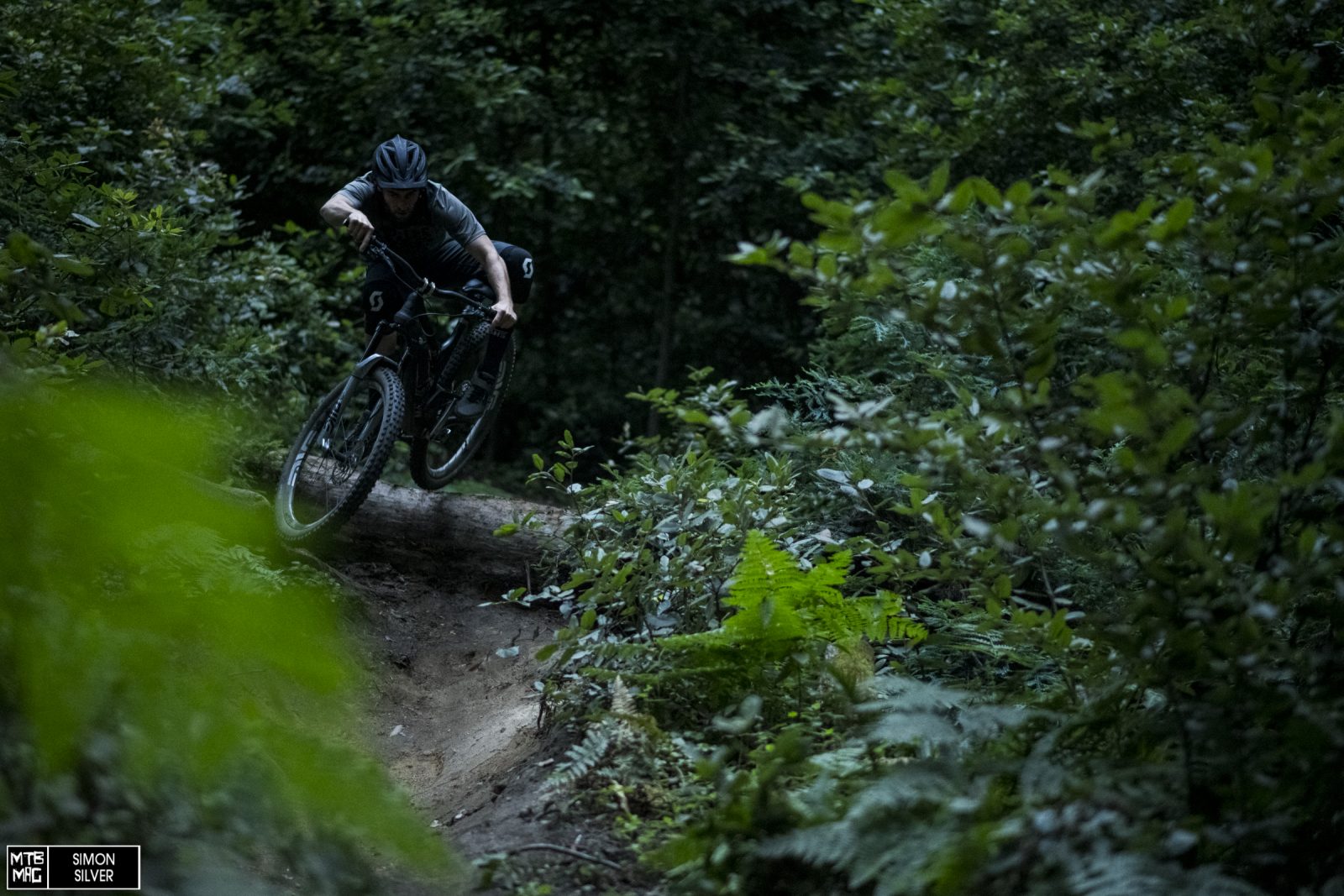 Speaking of quick taps, something I came to be quite fond of was the fact that under weight, briefly hitting the controller rapidly opens and closes the valve in the seatpost, which lowers it just a few millimeters. This was really nice in scenarios where I’d be climbing with the seat topped out, then upon getting into the meat of a technical climb, a blip of the controller would give me just a bit more room to better navigate the undulations of said tricky section. On the Reverb AXS this process of getting the seat just slightly more “out of the way” was far less distracting than on a mechanical seatpost, where you have to finesse the lever. This seamless process allowed for greater concentration on what matters – the trail ahead. As far as return speed goes, I think RockShox has hit the nail on the head…The seat comes back rather quickly, but not so fast that it slams you where the sun doesn’t shine. Full extension is met with a clear and audible, but pleasant sounding top out. As far as battery life is concerned, as I’ve been using the Reverb AXS in conjunction with an AXS drivetrain and have been charging both system’s batteries together roughly every 2-3 weeks and have yet to run into any problems. SRAM claim a 20 hour ride time for the derailleur battery which, in my experience, tends to indicate it’s going low well before the seatpost, so take that for what it’s worth. Lastly, while I haven’t had to put it to use yet, it’s reassuring to know that you can perform a quick purge of the air and oil in the internals with “Vent Valve”. It’s not quite as easily accessible as the reset lever on the BikeYoke Revive seatpost, but unlike the Revive, I haven’t actually even needed to use it, despite months of constant use and abuse.

All in all it’s difficult to find any real flaw in the RockShox Reverb AXS, save the price. In simple terms, it does cost roughly three times the average dropper seatpost – but then again, it most certainly is not your average post. Personally, I think it’s vastly superior to everything else on the market, but I’m not going to tell you how to spend your money. Unlike splurges such as titanium springs, the performance is actually there to back up the price tag. If you’re an aesthete with a fondness for a clean cockpit and low maintenance, there could be room on your bike for one of these seatposts. There is certainly a great deal of innovation to be found here – even where you least expect it, in places such as the clamp, which is far easier to use and adjust compared to its competitors. At the end of the day, Reverb AXS is pricey but it’s also perfect.

[Video] A day in Bend with Carson Storch & Cam McCaul

[Video] Chasing Volcanoes on a MTB with Kilian Bron