[ad3] When we first saw prototypes of the new Rocky Mountain Maiden floating around in Whistler at Crankworx 2014 , we knew they were up to something major.  An update to the Flatline was past due and the new full carbon construction caught our eye as the first DH bike of its kind in the Canadian brand’s history.  A burly carbon construction at that, with hardware unlike anything we’d ever seen.  Fast forward a couple years, and the Maiden is available to the public.  With a great degree of curiosity and enthusiasm, we reached out to them for a test bike to trounce on for a few months.  They sent down their mid level spec’d Maiden World Cup.  With a Shimano Saint Drivetrain, BOS front and rear suspension and a solid mix of Race Face parts, it appears to hold a promising value at $6,999(US). 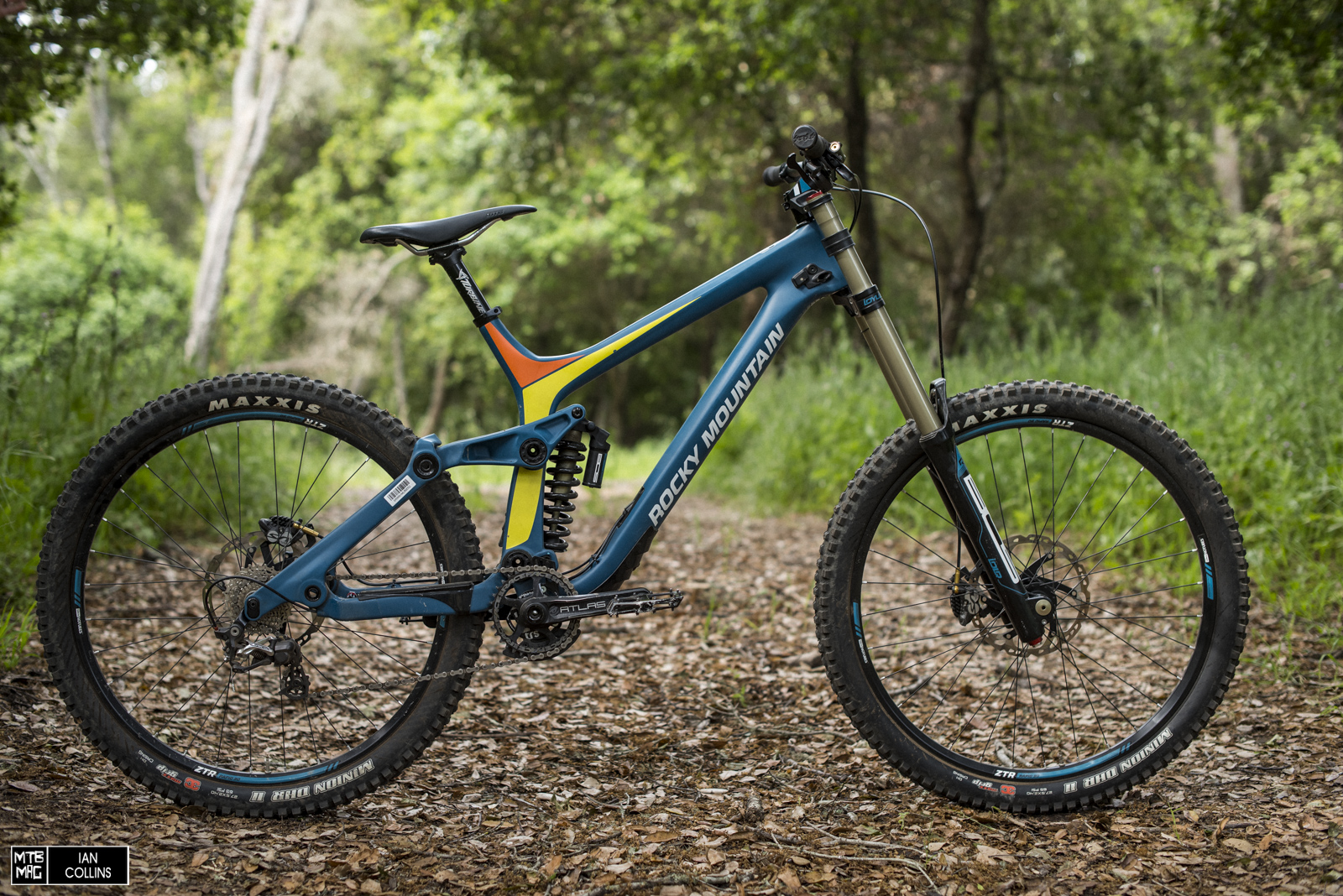 The Maiden frame has no shortage of brilliant design elements.  Each and every aspect of the bike is extremely well thought out.  Smart routings, brilliant protective bits and ample tire clearance are just the beginning…

On paper the Maiden boasts a very attractive set of numbers that should suit a broad range of gravity riders.  Short 425mm chainstays, a low BB and somewhat roomy reach should suit anyone from weekend warriors to racers to park rats.  After all, the Maiden’s strongest input seems to have come from one of the raciest freeriders of them all : Thomas Vanderham.  Relative to geometry, one of the most brilliantly executed design elements of this frameset is its ability to utilize both 27.5″ and 26″ wheels.  Between a flip chip at the rear axle and a special lower headset cup, the geometry can easily be corrected for either wheel size.  Freeriders rejoice, 26″ isn’t quite dead.

The parts that Rocky Mountain chose for this bread and butter spec levelare proven and reputable for the most part. You certainly can’t accuse them of skimping anywhere.  The components are a carefully chosen mix of parts that are tough enough for park abuse and freeride, yet with a strength to weight ratio that should keep a smile on the face of anyone who’d want to rally this bike between the tape on a race weekend.

Admittedly, it took us a little bit of dabbling to achieve the perfect setup on this bike.  It shipped with the front end slammed down low and a 375 pound spring which felt a bit soft.  We swapped to a 400 pound spring on and popped a couple of spacers under the upper crown on the fork.  After that, it still wasn’t quite there…with a 425 pound spring and the rest of the spacers under the crown, our 6 foot tall, long limbed 185 pound tester found the sweet spot.  Every suspension adjustment up front and out back required tools, but that forced us to be a bit more cerebral about our fine tuning; so we can’t lament the lack of tool free adjusters too much.  Also, we ran the shock upside down for easier access – this leaves you with a snippet more unsprung mass.  The nerds can find their sweet spot and then flip it back over.

Up front, we opted for 219 PSI in the BOS Idylle fork with the lower crown topped out in the highest position.  Having set our “Ride-4” adjustment in the forward most position of the two middle options, we ran our rear axle in the upper position, thus yielding a nice low bottom bracket of around 13.2″(335mm) 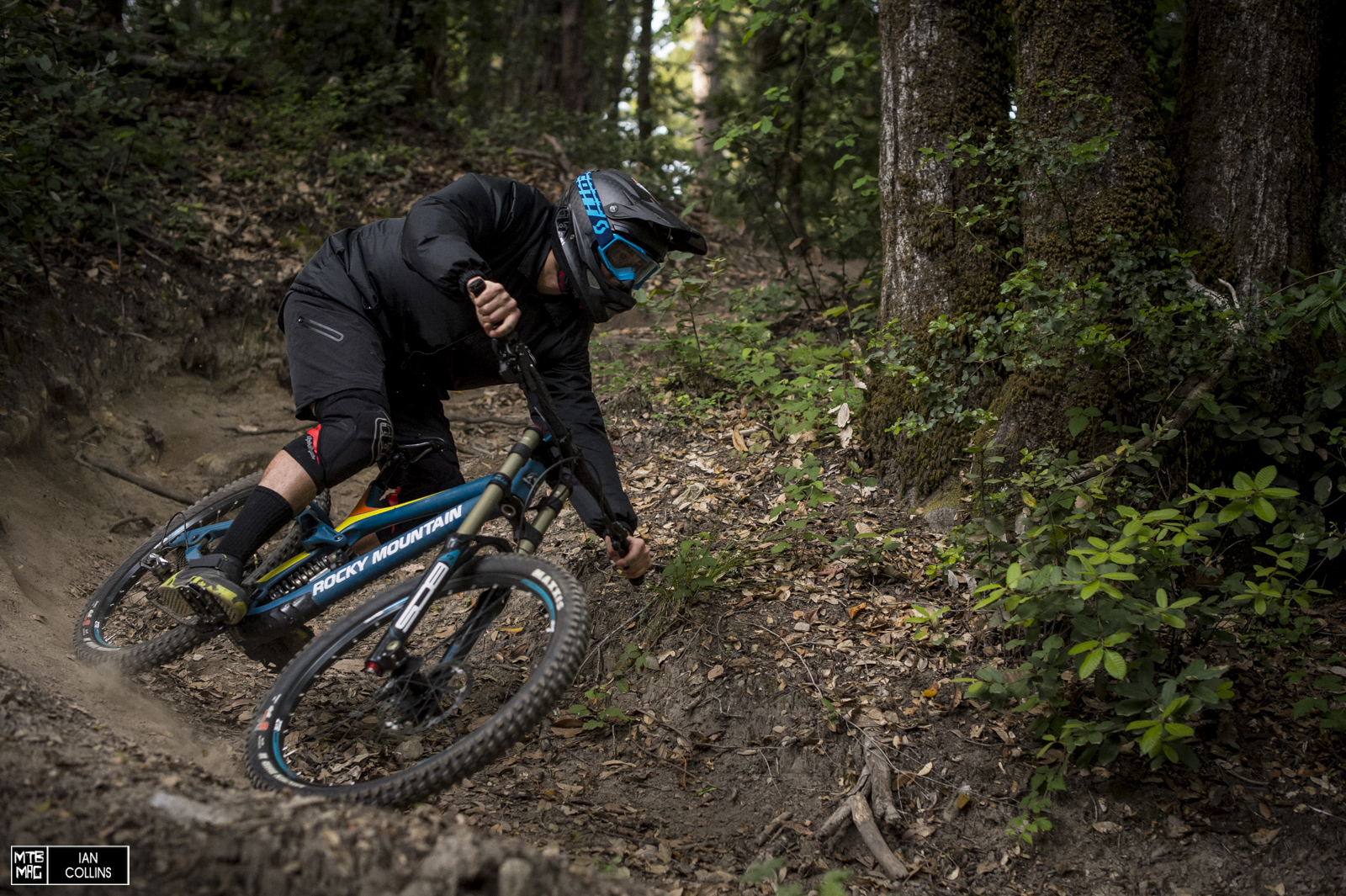 Once set up and ready to be pushed a bit harder, the virtues of the Maiden’s design made themselves known.  The massive bearings and hardware translated to one of the stiffest chassis that we’ve ridden to date, but more importantly, the well tuned carbon layup wasn’t harsh in any way.   From an engineering standpoint it’s NOT hard to overbuild a bike and make it stiff.  However, it IS difficult to design a carbon frame that is lightweight and offers a resilient feel that actually helps take the edge off while also being rigid enough to handle precisely.  By the way, when we say lightweight, our bike tipped the scales at just over 35 pounds. That’s very impressive for a stout build with a coil rear shock laced with a steel spring.

Another admirable trait of the Maiden is just how deathly silent it is on the trail.  We’re talking about the frame in particular; we did notice the BOS fork was a bit noisy despite its incredible performance.  The Idylle had a massive amount of usable adjustability and was smooth and supple as could be.  As far as we know, there isn’t any way to adjust the volume in the air spring, at least not by way of plastic reducers a la RockShox or Fox.  With that said, we felt that it struck a perfect balance and had a really supportive mid stroke; something we rarely achieve without packing a fork full of volume reducers. 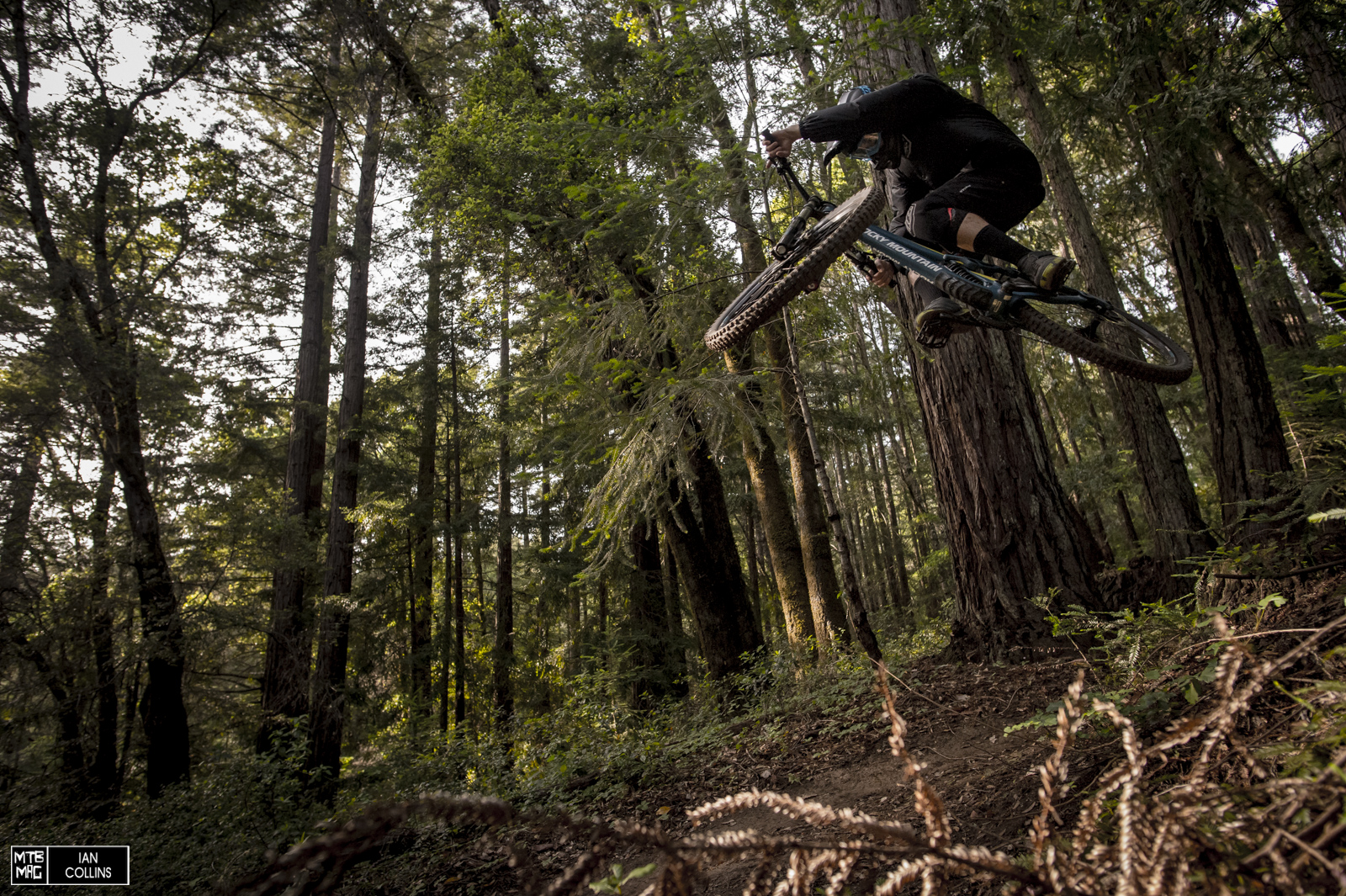 With short 425mm stays, it’s no surprise that the Maiden is snappy in the corners.  Keeping that in mind, if you’re buying this bike with racing as the end goal you may want to consider sizing up.  It runs a bit small, and with a short rear end you might need to err on the longer side to increase stability in really fast rough terrain.  If you’re just cruising the park you’ll be thrilled at how composed it is in the turns.  This bike doesn’t wallow or get tossed around by braking bumps.  It stays high in the travel and is snappy as could be, in part thanks to the kinematics but also due to the physical construction.  It jumps quite well, particularly if you run it a bit on the firm side and pack on a little extra compression damping, leaving you with more to push against.

Speaking of damping, this bike has an interesting suspension rate –  Rocky Mountain told us it’s quite progressive, but we didn’t think it was as dramatically rampy as they claimed.   As mentioned, it likes to sit up in its travel in the initial few inches, thus offering really good support…However, in g-outs, on steep lips and other heavy mass transfer scenarios, it seemed to use up the travel rather quickly.  We packed on a lot of Low Speed Compression out back to offset this and the BOS damper responded well and still provided endless travel without getting harsh or spikey.  Indicative that Rocky and BOS got the tune just right and also that the shock is beyond competent.   In all of our time on the bike, it never bottomed harshly or rode rough, but it was easy to get the bike deep into the travel.  It seems like it would be an excellent candidate for an air shock out back.

As far as pedaling was concerned we felt the Maiden was surprisingly efficient for a DH bike…these days, most are.  With regards to braking the Maiden felt quite neutral, tracked well and didn’t seem to show any signs of brake jack or squat in late brake scenarios or under heavy braking in general. As far as parts choice is concerned, the Shimano Saint group was solid.  We’ve gotten accustomed to SRAM’s 7 speed block so going back to 10 speeds left us constantly scrambling for the right gear.  Not a huge deal as companies like Hope, E.13 and OneUp offer low cost 7 speed conversions.  The brakes were solid and strong as could be, but an odd nuance about Saints is that if you leave them for a week or two without riding, they squeal on your first run or two until they burn back in.

The e.13 chainguide was top notch and the Race Face cockpit and crankset were utilitarian and sturdy as could be.  Our only minor complaint would be the wheels…The Stan’s rims were rather easy to dent, but take that with a grain of salt…They never flatted or went way out of true.  The alloy they are comprised of is rather soft and forgiving.  Racers will appreciate this as it’s harder to flat or slice a tire.  The hubs they were laced to proved to be trouble free and the Maxxis Minion DHR II’s were stellar in all of the conditions we rode them in.  All in all, a really sound build.

So, how did this bike fare in the grand scheme of things?  Amazing really.  We haven’t ridden a DH bike to date this is quite as easily applicable and adaptable to so many different riders and situations.  Rocky Mountain have knocked this project out of the park.  With a bit of planning this could be the perfect race weapon that can adapt well for park riding, big mountain or just busting out shuttle laps with your friends. A rock solid drivetrain, fantastically tuned suspension and a sturdy mix of parts that tip the scales at just over 35 pounds is tough to beat at its price point.  While Rocky Mountain did a great job with spec’ing the bike, it’s the heart of the bike (the frame) that really won us over.  We just might be lining up a frame only for a Dream Bike project that’s on the horizon. 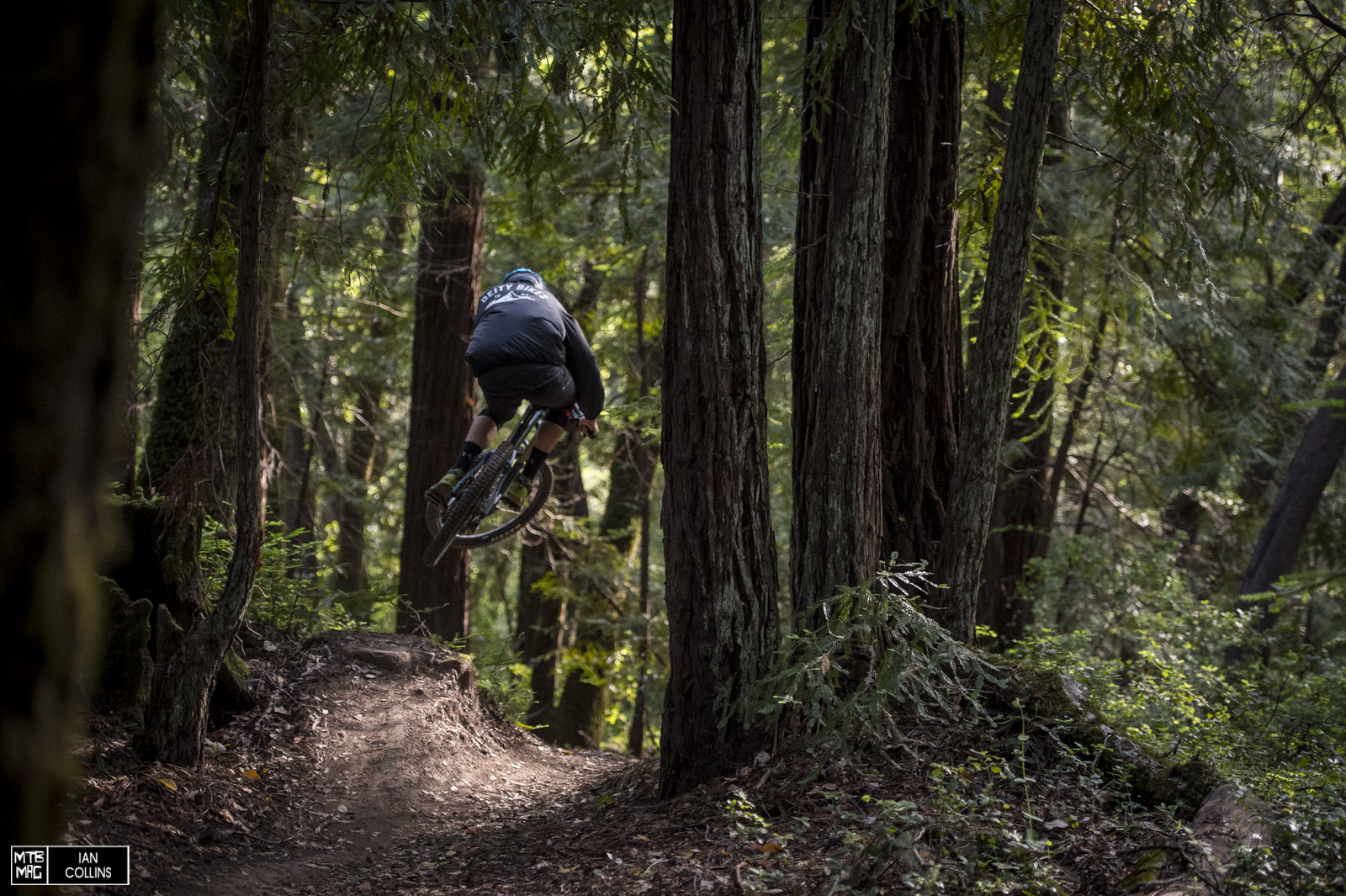 Special thanks to Hyland Bikes in San Jose for helping us get the bike to California.