Back in August, Santa Cruz introduced the Tallboy as the latest bike in their lineup to migrate over to the newer “lower link VPP” suspension layout. In addition to seeing a boost in travel from 110mm to 120mm out back, the “downhiller’s XC” bike, as Santa Cruz calls it, also earned a more aggressive geometry set for a more confident stature. On the feature side, it picked up adjustable chainstays, fully sleeved internal cable routing and a second water bottle mount, among other things. We’ve been pulling the Tallboy out of our quiver for some of our longer, more adventurous rides over the last few months. Read on to see how it fared … 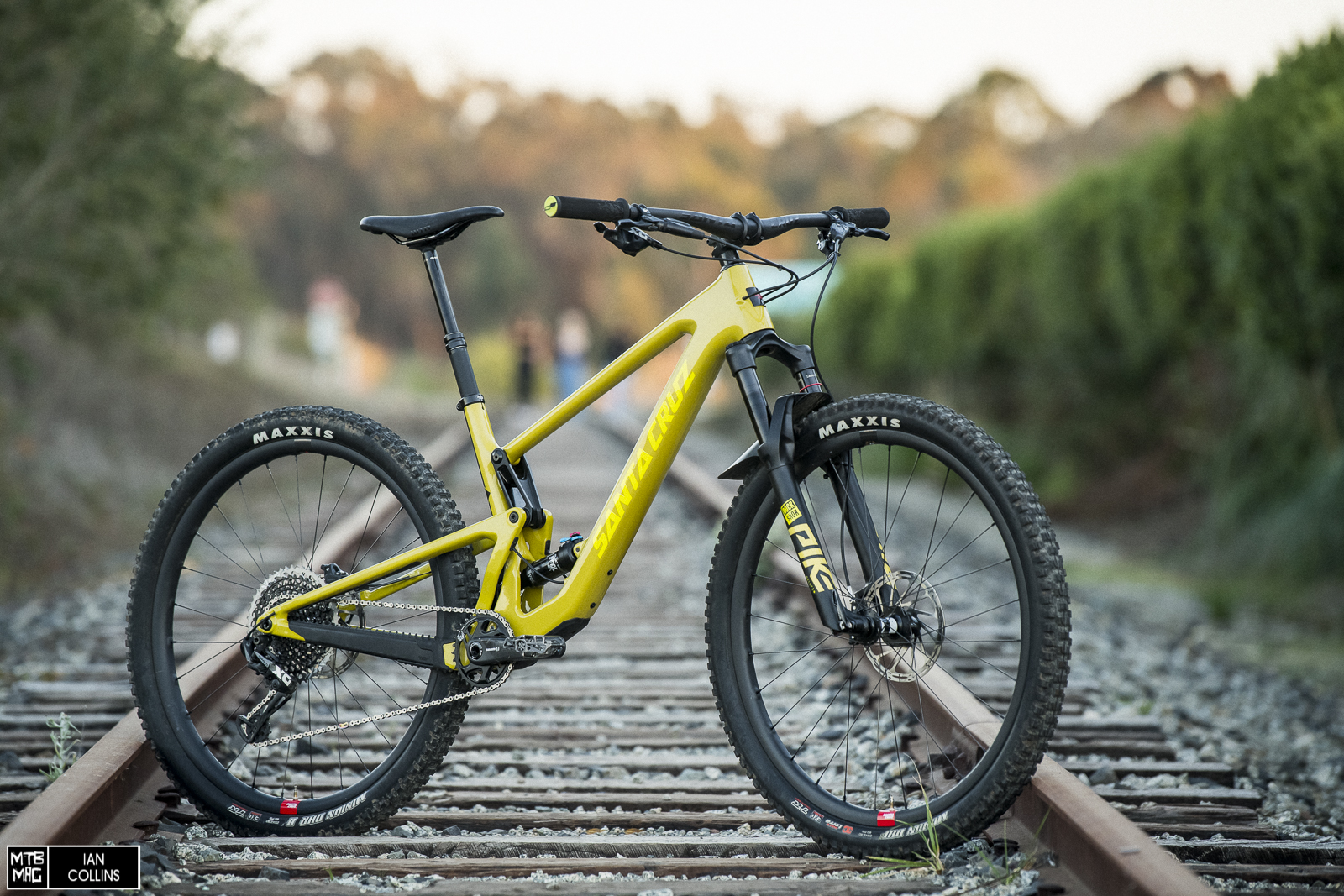 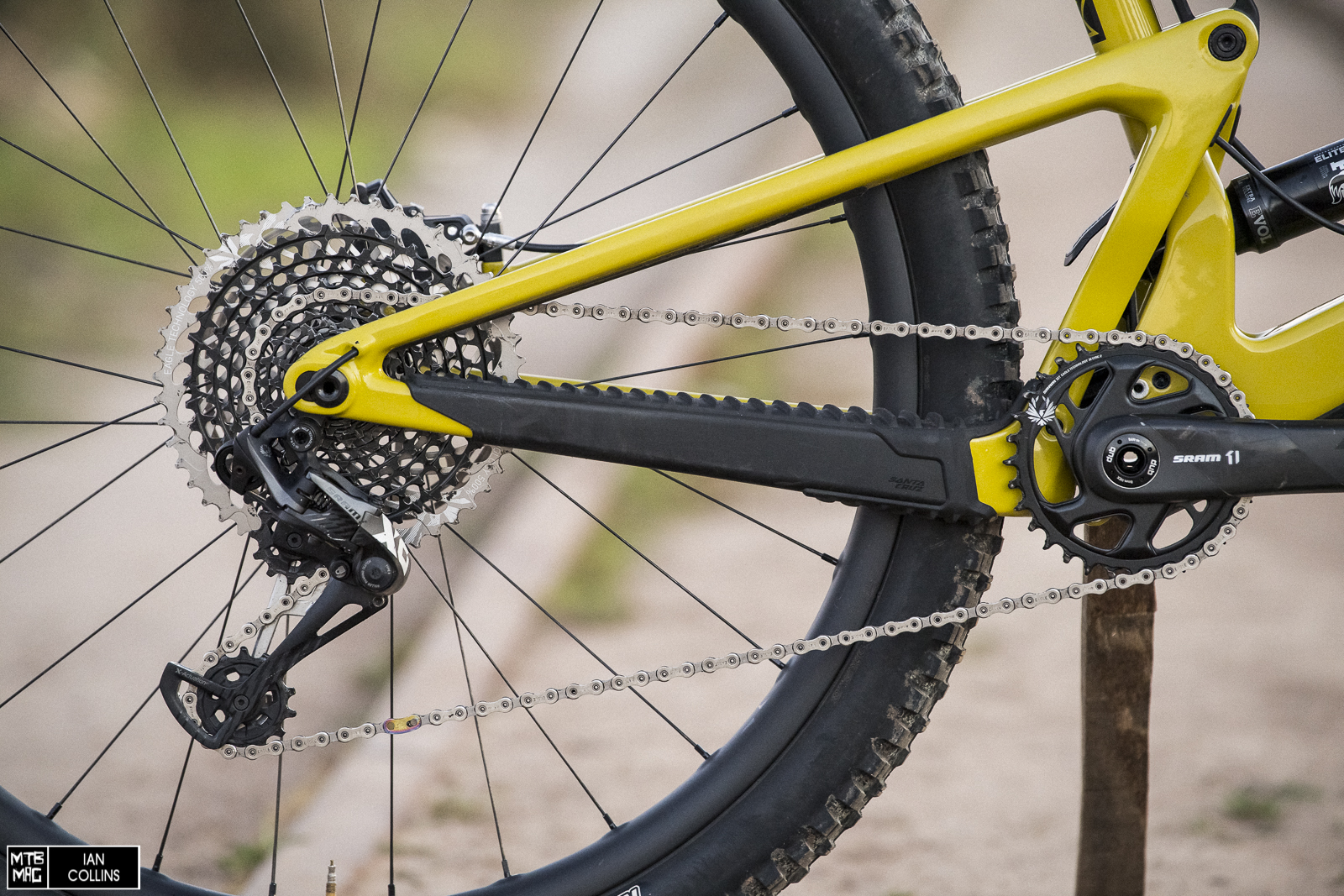 The XO1 version of this bike is almost completely spec’d with SRAM Eagle XO1 Carbon, save for the cranks, which are at least still carbon fiber (X1 level) and use a DUB bottom bracket. The drivetrain’s merits are strong with accurate shifting, a huge 500% range, and perfect chain retention. Up front a 32T chainring can be a little rough on huge days, but for most rides it was suitable. A glance at the axle reveals the flip chip in the rear end which allows you to switch between 430mm and 440mm. 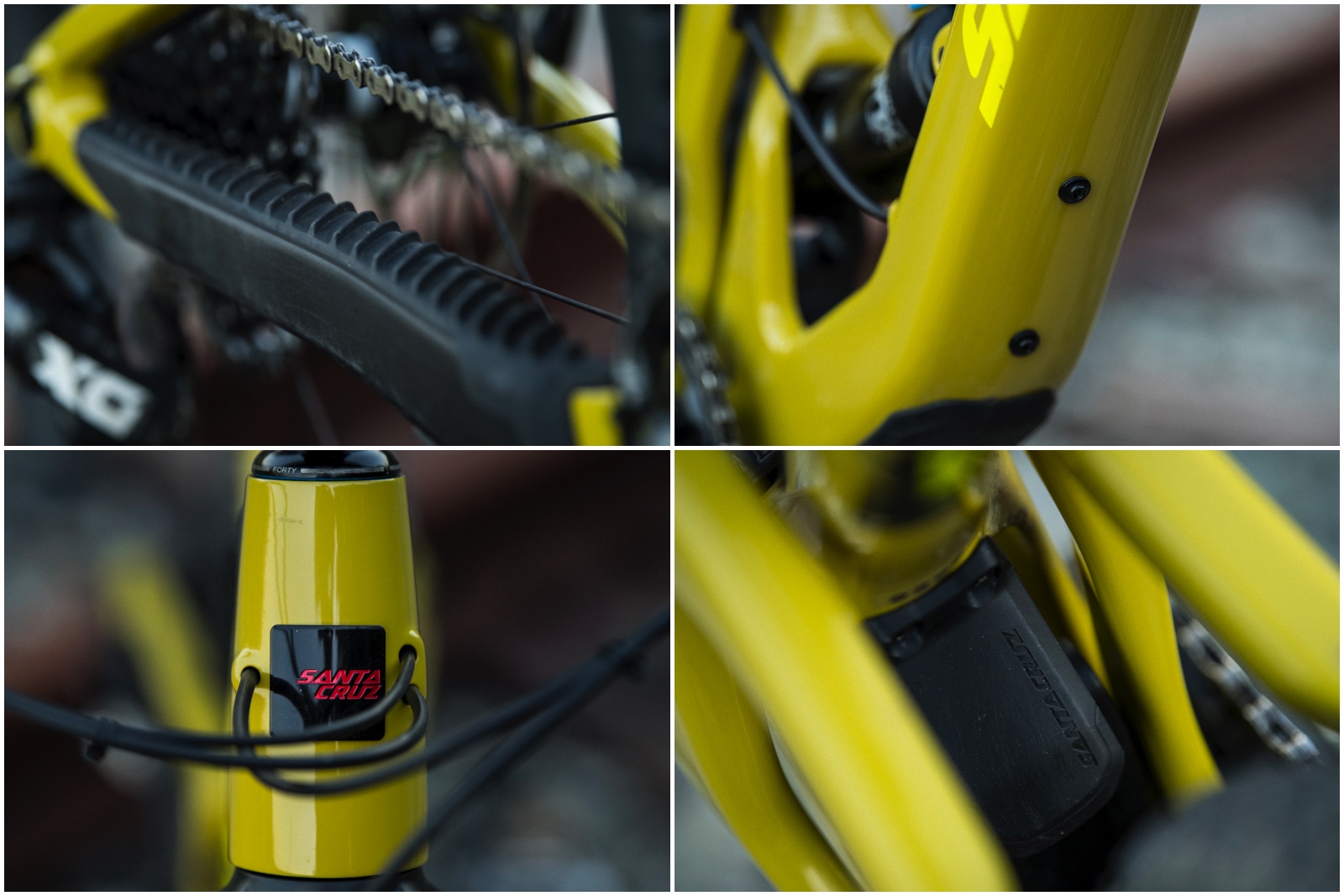 Clockwise from top left above: Santa Cruz spec’s their version of a noise silencing chainstay protection that dampens chain slap, which we found works quite nicely. You can mount a second water bottle on the downtube if you love all day missions, but hate hydration packs. With the rear shock shaft exposed to debris, rocks and moisture coming off the back tire, Santa Cruz includes a nice little mini plastic fender to protect it. Lastly, the internal cable routing is sleeved, quiet and lines up nicely for a clean cockpit. A 50mm Raceface Aeffect R stem and carbon fiber Santa Cruz handlebar grace the front end. The handlebar is a full 800mm width and a fairly low 20mm rise with a 35mm bulge. Coming along with its own lifetime warranty and weighing in at just 235g, it brings “DH strength at an all mountain weight” according to Santa Cruz. Included, but not pictured are Santa Cruz’s Palmdale grips which were just fine, but swapped out for the trusty Sensus Meaty Paws. 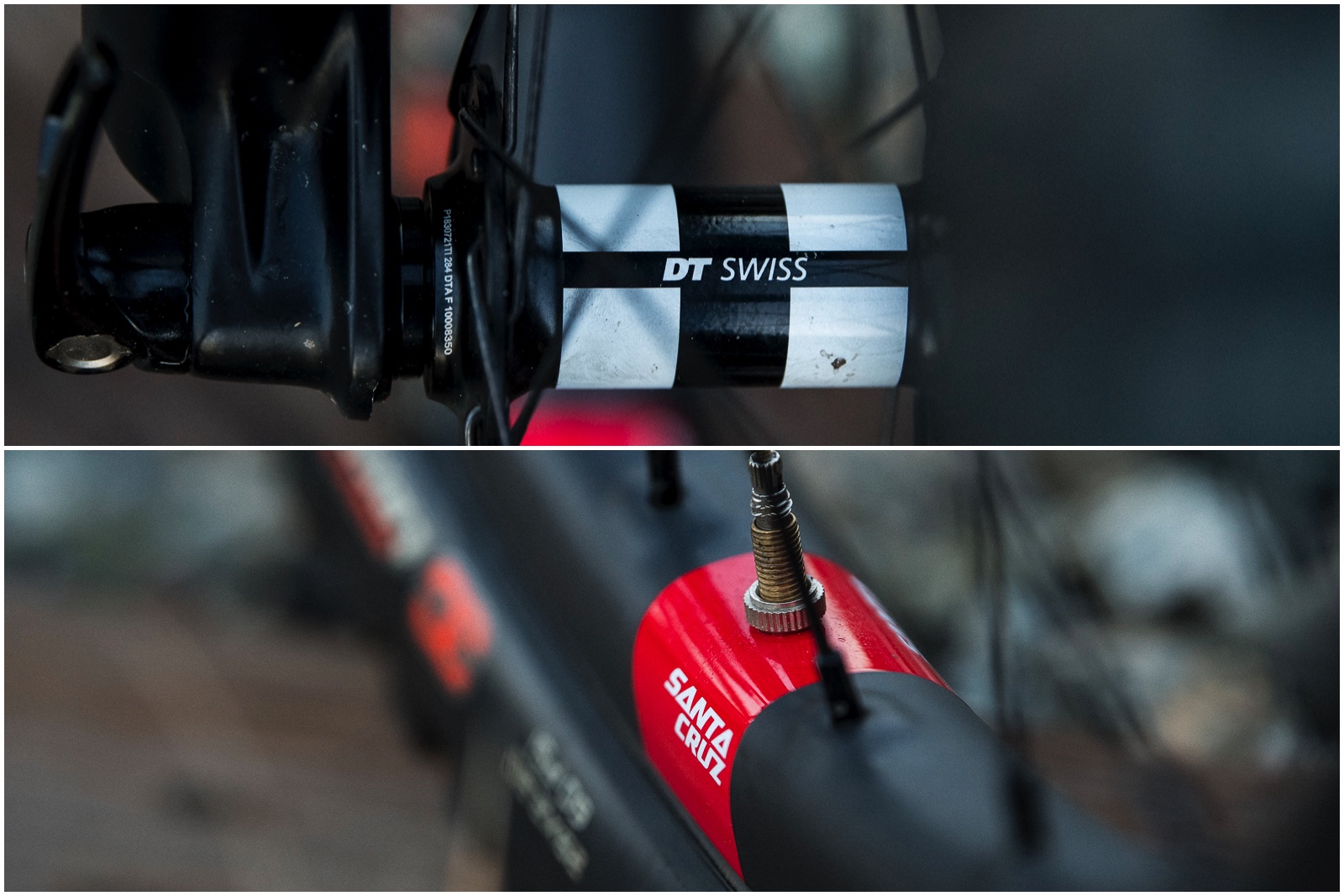 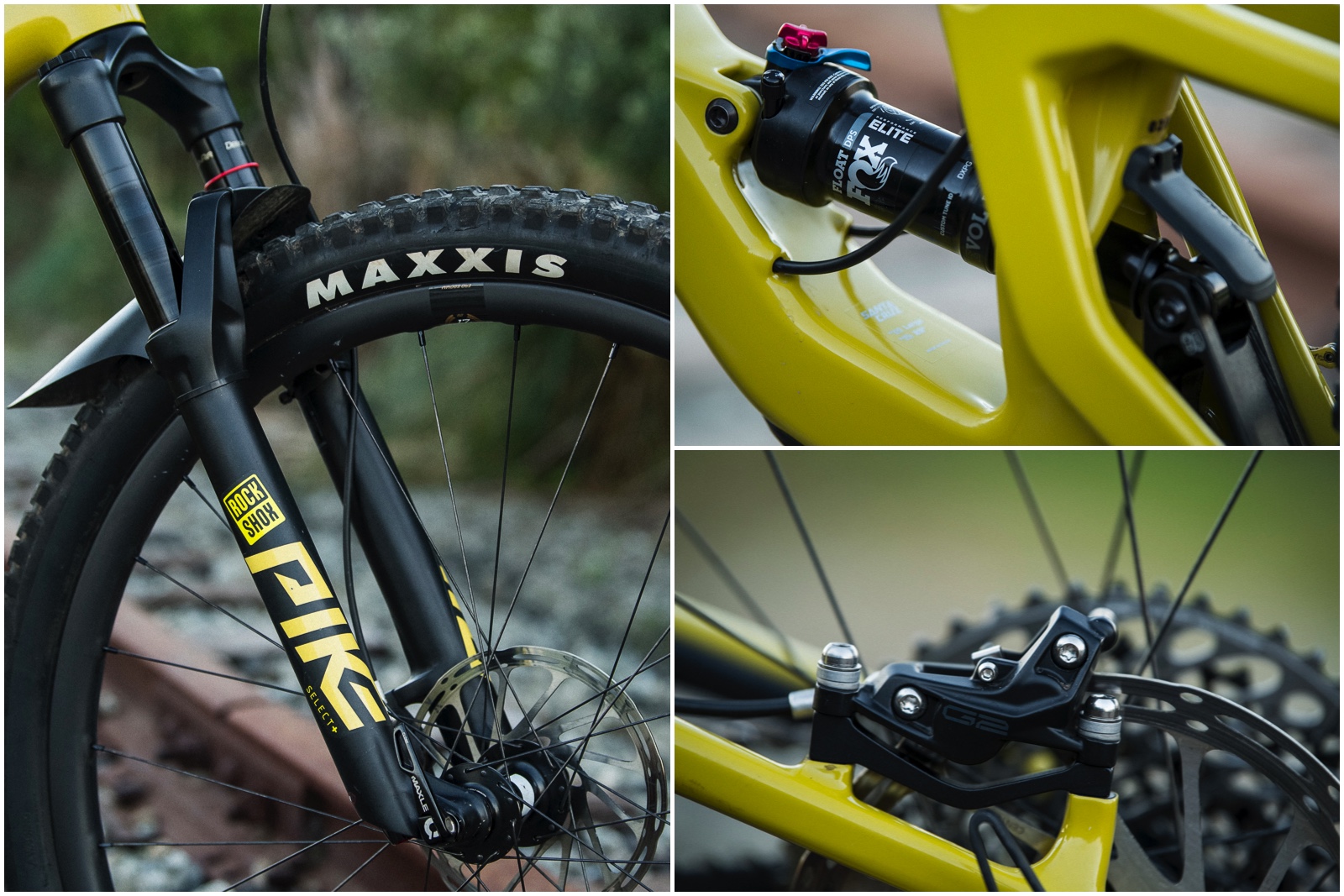 As far as suspension is concerned, The RockShox Pike Select keeps things glued to the ground with 130mm travel and a single compression and rebound adjuster. Out back a Fox Float DPS Elite handles business with a 3-way “open, trail, closed” style adjuster as well as a 3-position low speed compression knob and a standard rebound adjuster. The lower shock eyelet has a flip chip for a high / steep or a low / slack setting. SRAM’s excellent G2 RSC brakes handle the slowing of the wheels with a 180mm front and rear rotor. 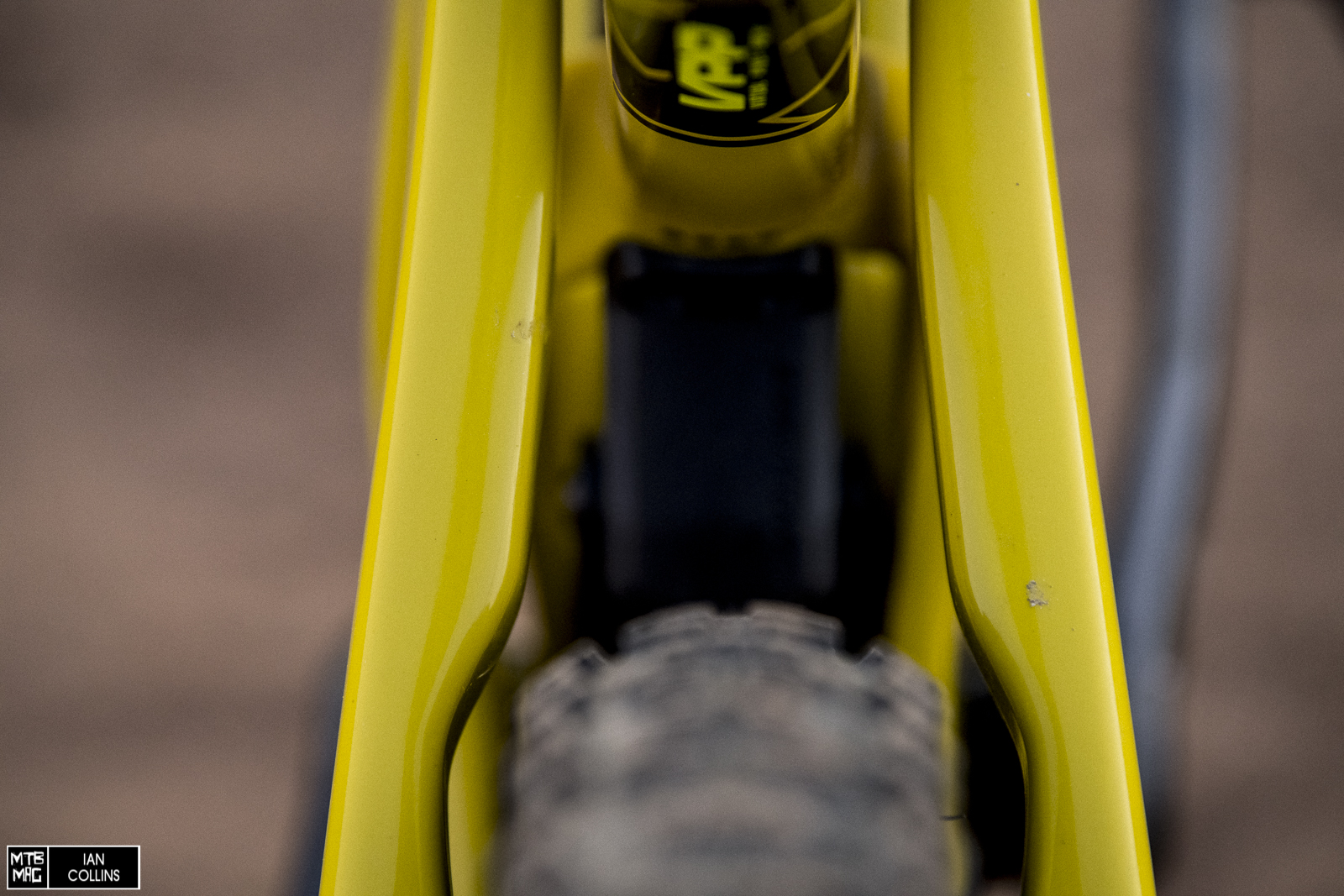 Out back the tire clearance is quite ample. In the short chainstay setting the Tallboy can clear a 2.5 “tire and up to a 2.6” tire in the long setting.

Santa Cruz Tallboy: on the trail

Starting by quickly touching on fit, at 6 ‘tall the Large fit me well, making it pretty true to size. With a 470mm reach, Santa Cruz isn’t taking any major risks or pushing the limit with groundbreaking geometry. With that in mind however, there are six (props!) Sizes, so there should be something suitable for everyone out there. For the most part, I rode the Tallboy in its most playful form, with the low BB / slack head angle setting and the chainstays in the short position. A quick pause to commend Santa Cruz on the bike’s adjustability … I tend to rate highly adjustable bikes very well and the Tallboy is no exception. Having four completely different geometry configurations (and thus attitudes) makes the bike ultra versatile, which boosts its value in my eyes. 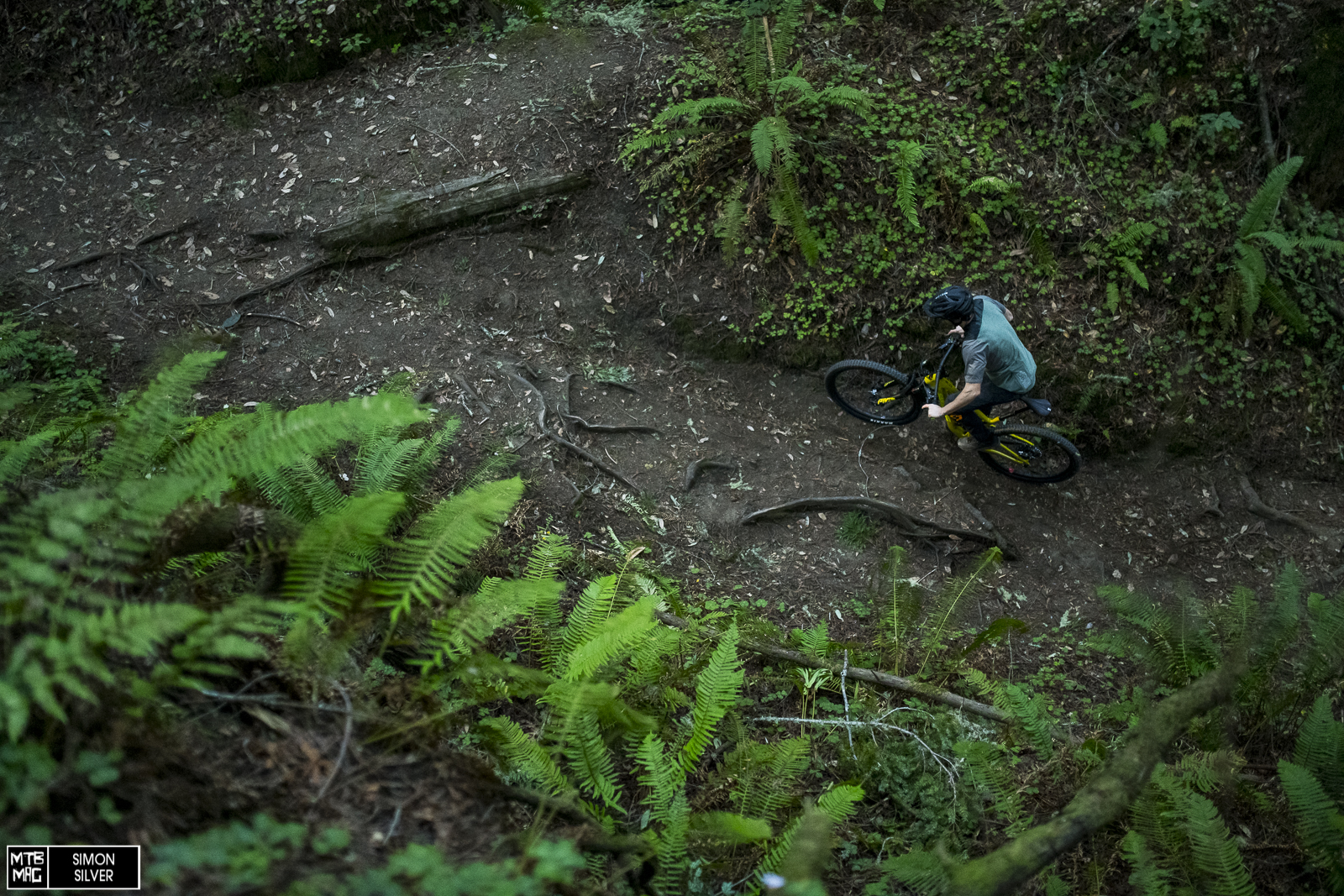 Set up in low / short / slack configuration, the Tallboy embodies everything we’ve come to love about modern, aggressive, short travel 29 “bikes. This means lightning fast handling, punchy cornering and enviable acceleration. Big wheels make for great roll over on obstacles, which boosts confidence in unknown terrain, and short but effective travel gets the suspension job done while allowing the bike to be super responsive to rider input. Speaking of suspension, while not every iteration of the new lower link VPP design has garnered flawless reviews in that department, the Tallboy was in fact “just right”. It had that perfect mix of light off the top, supportive in the middle and resistant to harsh bottom outs that everyone is looking for in their rear suspension’s formula.Personally, I would have loved to see the bike spec’d with a piggy back shock but I say that about almost every short travel bike that I review as I think they could all generally stand to benefit from better heat management and more control on long descents.

Regarding climbing, although it will surely come in handy for some, I personally never once used the lockout, even on a couple of missions where I was weighed down with a camera bag. The Tallboy’s kinematics are very neutral so it’s quite calm and composed on the climbs, thus saving energy. From a body positioning standpoint, the geometry just managed to put me where I wanted to be, but I did feel a little stretched – I suppose this means that I could have slid into an XL. The 76º effective seat tube angle is on par with average numbers these days, but could be slightly steeper and no one would complain. 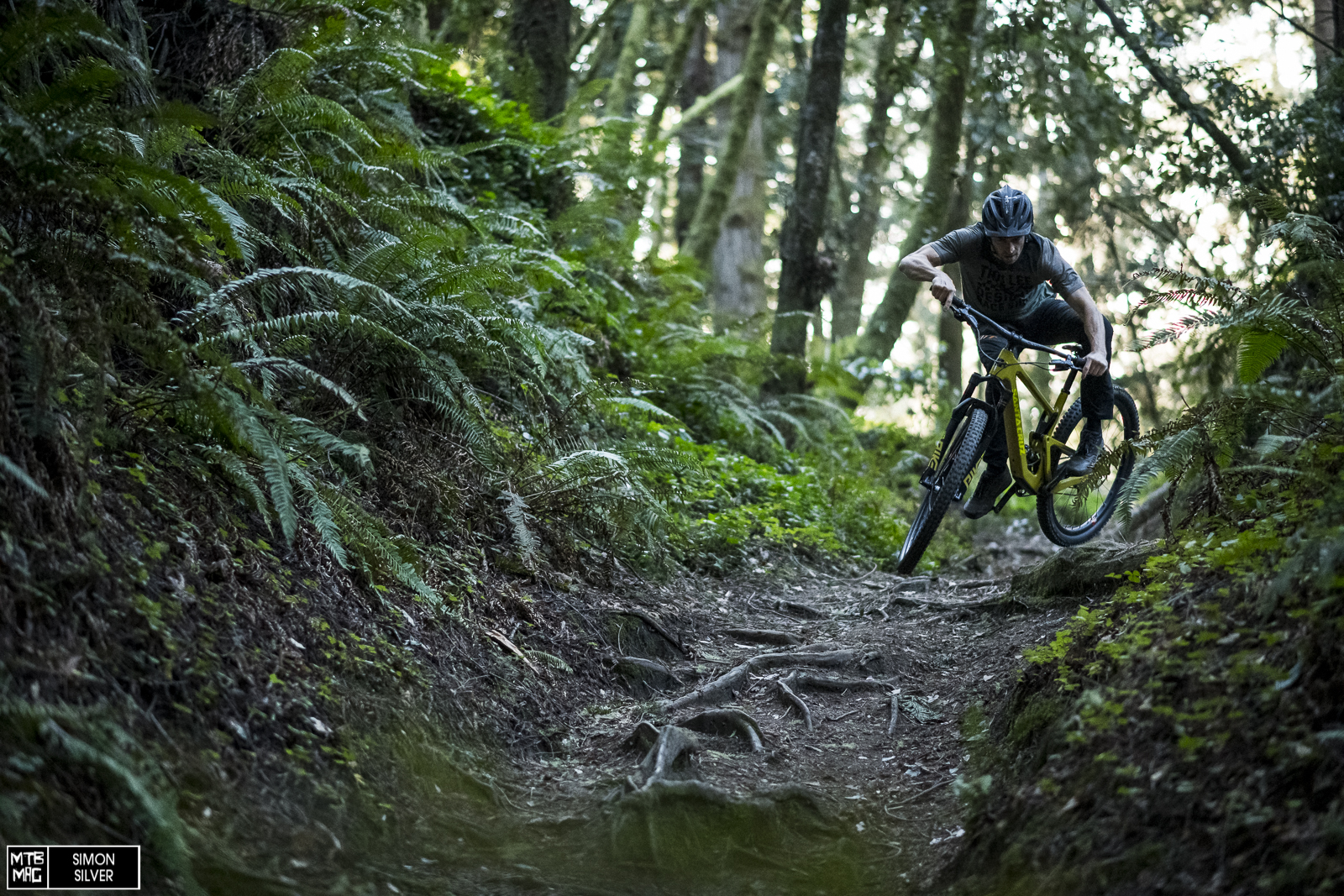 As far as the parts spec is concerned, Santa Cruz played it smart and opted for proven components that you’ll scarcely hear any gripes about. The Eagle drivetrain was perfect for usual, and the G2 RSC brakes were powerful and consistent, although at times I would have liked a 200mm rotor up front given the bike’s level of capability. The Pike Select handled nicely and provided smooth, consistent action despite having limited range of adjustment, which I wasn’t sweating and didn’t miss the second compression damping option anyway. While I do personally think the Santa Cruz Reserves are excellent wheels that will give the bike an edge in terms of on-trail feel, the extra $ 1,200 that youshell out to get them is quite a bit of coin and pushes the bike up into a price point where some consumers might want to see more value than what’s on offer here. If you’re on a budget, it  could be worth considering the Easton aluminum wheels, which come at the expense of just a few grams, still ride nicely and do save you a good chunk of change. That said, the Reserves – like the frame by the way, do carry a rather incredible lifetime warranty.

Over the last couple years I’ve been lucky enough to ride quite a few aggressive short travel 29 “bikes – undoubtedly it is an exciting category. While it’s hard for me to pick an all time favorite, the Tallboy is certainly up there. It doesn’t have any one single screaming attribute that completely sets it apart from other bikes in this arena, but then again it doesn’t need to. It’s a blast to ride, it’s composed, consistent and highly adjustable – which means that even if you’re a hair splitter like me, you won’t have a problem setting it up precisely how you want it to ride. While at $ 8,199 as tested, this particular Tallboy’s value didn’t knock my socks, keep in mind that with six sizes and a plethora of spec levels available, there is something for everyone out there. At the end of the day our reviews tend to focus most on what’s at the heart of the bike – the frame. In the case of the Tallboy, it’s a damn good steed for long days in the saddle, especially if you’re looking for something that leans toward the fun and playful side of things, but could also be set up a bit more “business” as well …

* This article has been updated for accuracy and clarity.

How Much do the Pros Make?