Scott – a brand that while huge in Europe, is still tying to crack the US market. This seems especially the case with e-bikes. This past Winter, they sent out a Strike eRide 910 for a bit of testing. The bike is has 140mm of travel front and rear, featuring Scott’s signature TwinLoc remote technology, which allows you to simultaneously lock out and unlock your suspension via bar mounted levers. Read on for a full rundown on the bike, as well as short riding video on our local trails. 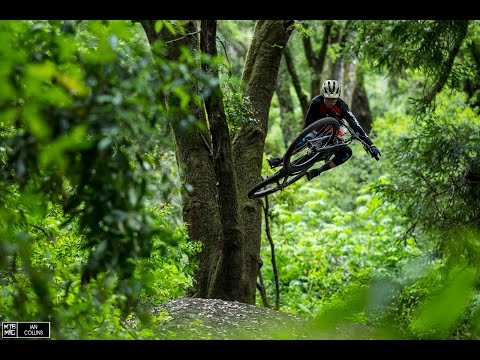 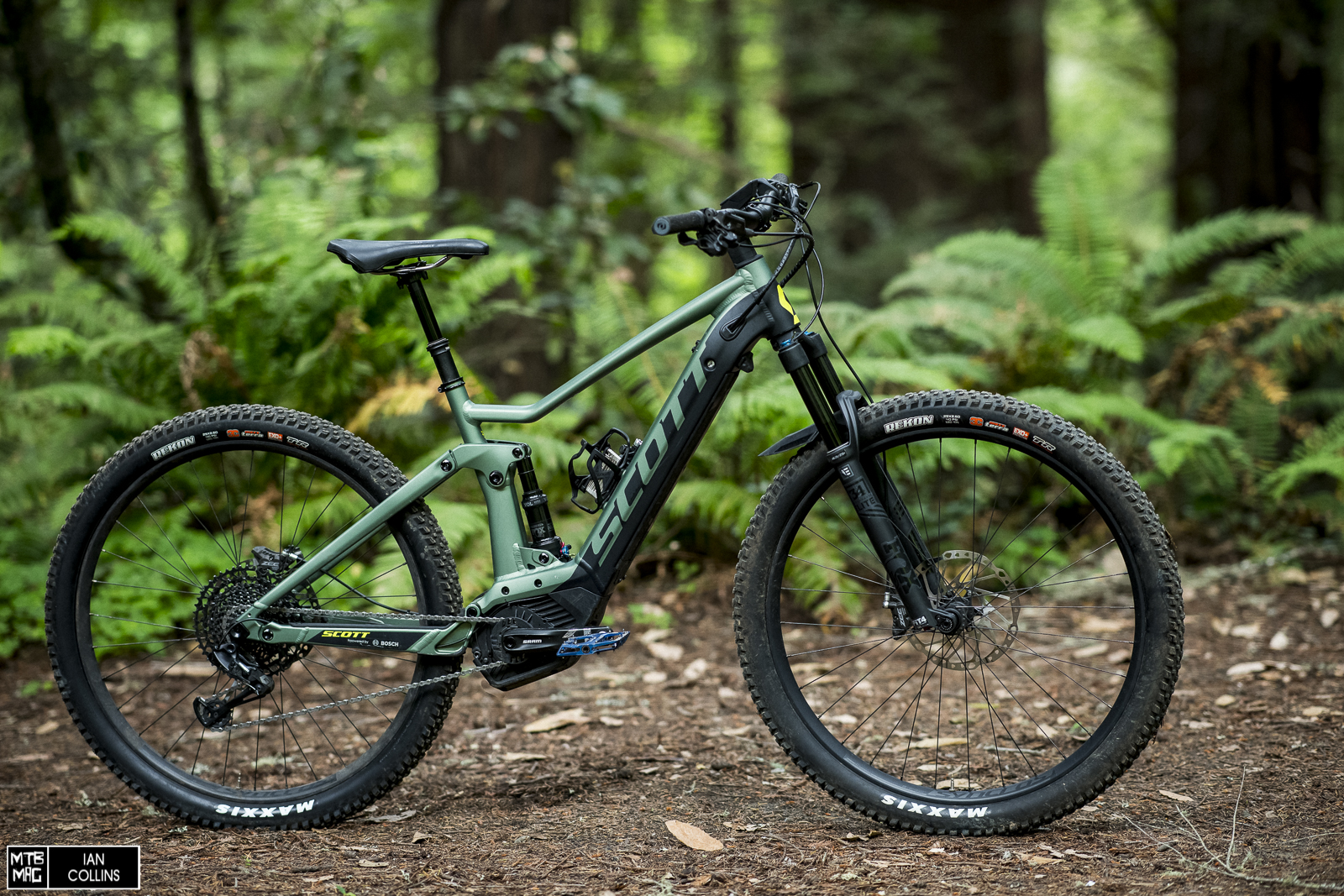 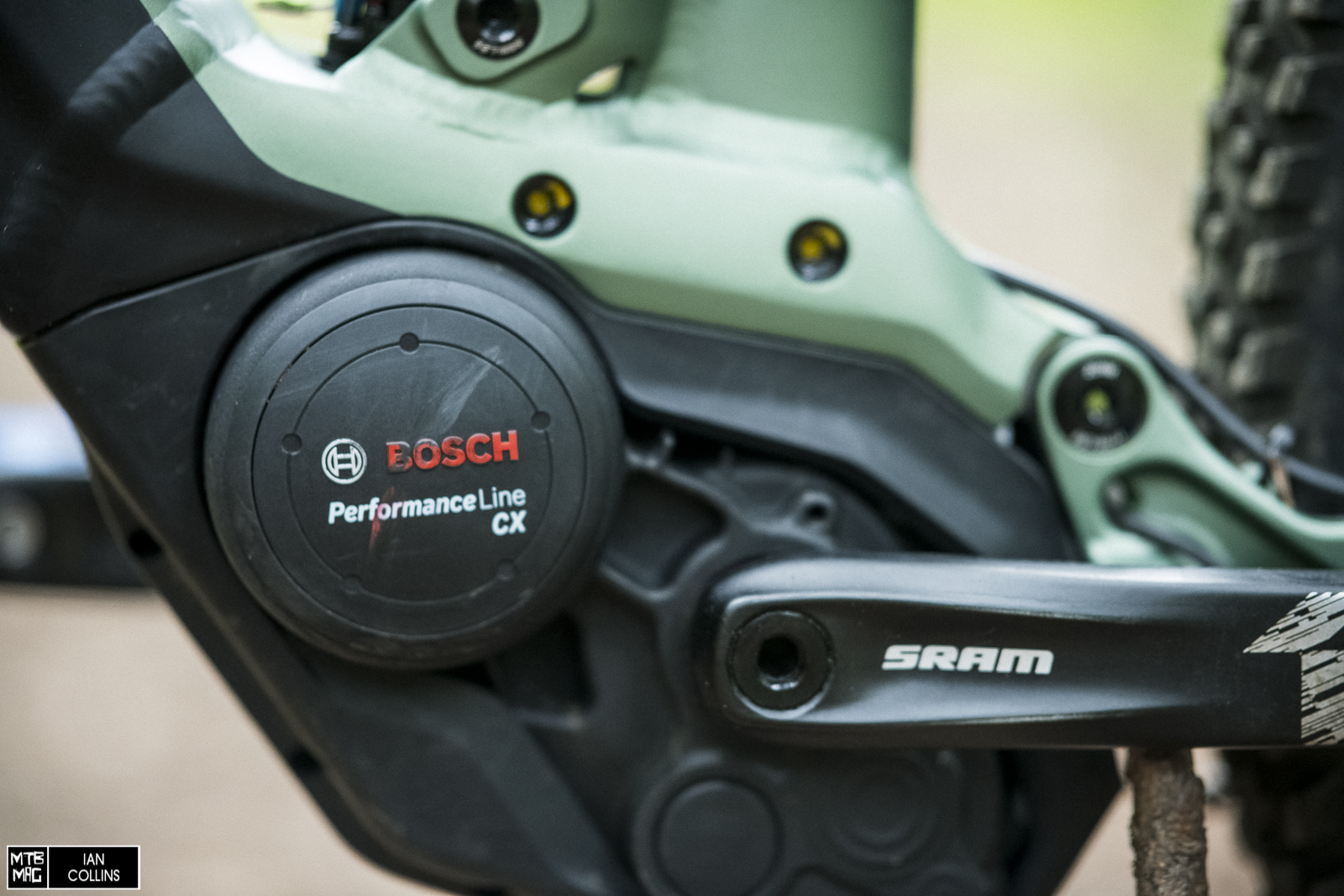 The Strike 910 is based around the proven Bosch e-bike system. The bike features the Performance CX 250 watt system with a 500 watt battery. Max assistance speeds are 25kmh in the EU and 20mph in the US. 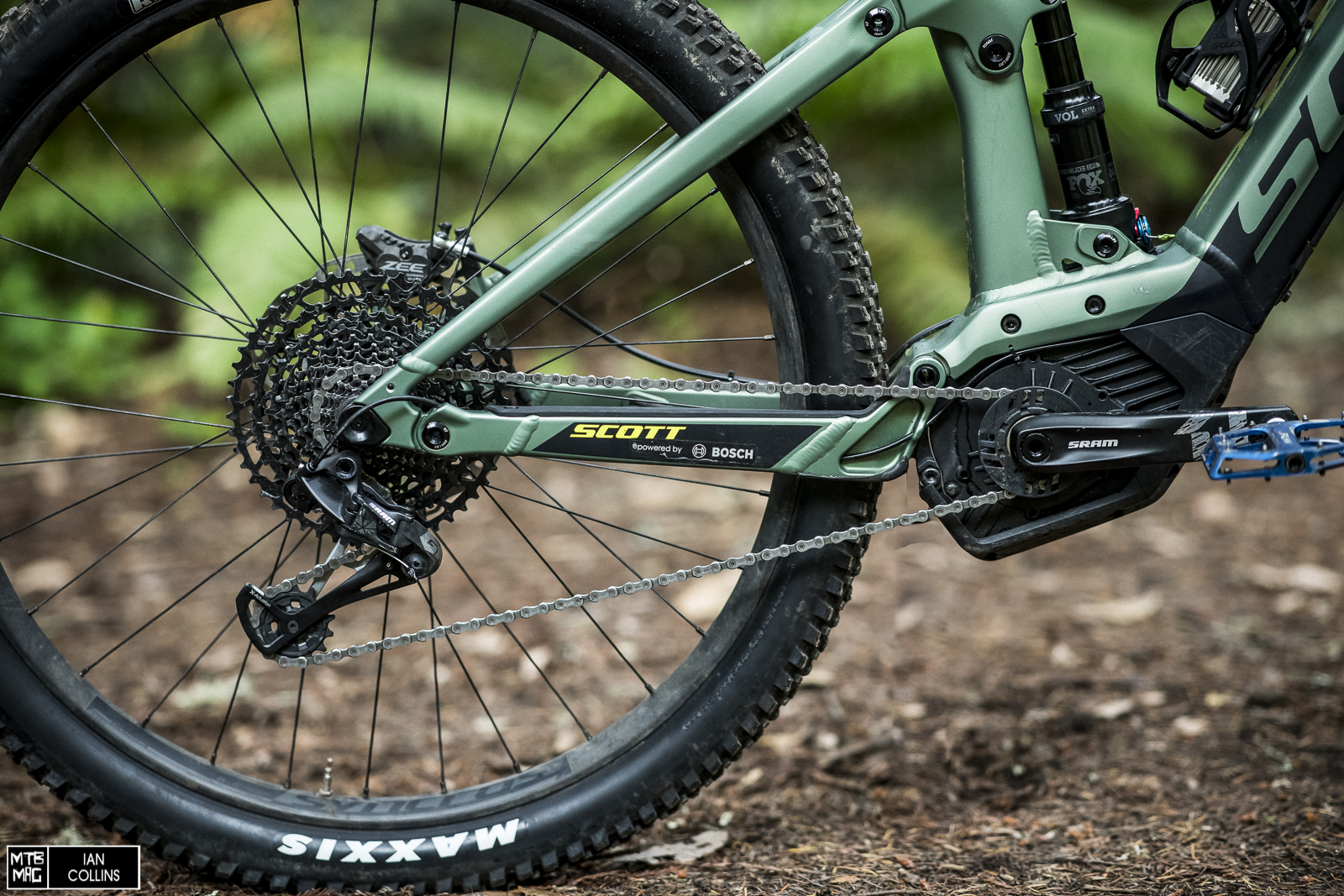 A 12-speed SRAM GX Eagle drivetrain keeps things rolling in the shifting department. Things worked well, though we’ve noticed a greater strain on components under the forces of e-bike power, aka no last minute shifts under load, unless you want to stress your cable and chain. 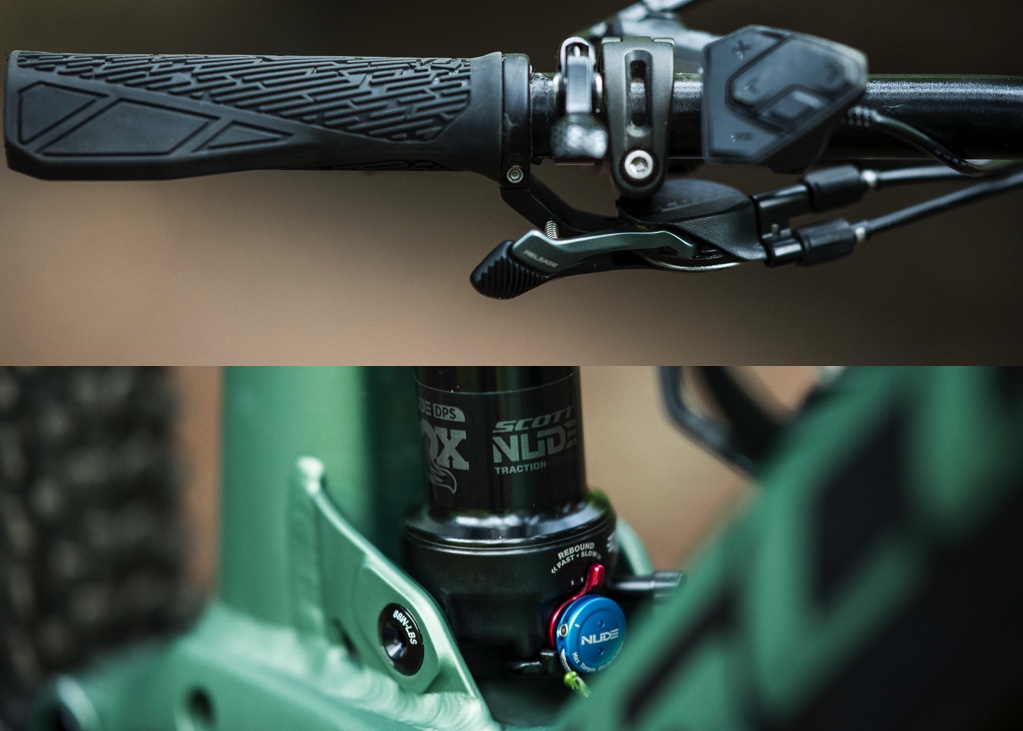 The Scott TwinLoc Remote Technology is a novel idea, though on an e-bike, we found ourselves rarely using it. Our largest gripe with the system, is the integrated grip clamp / TwinLoc clamp. The two-in-one system essentially forces the rider to use the stock ultra-ergonomically shaped grips. Granted theres’s another TwinLoc compatible Syncros grip that features a more normal design, but the system still feels limiting to us. 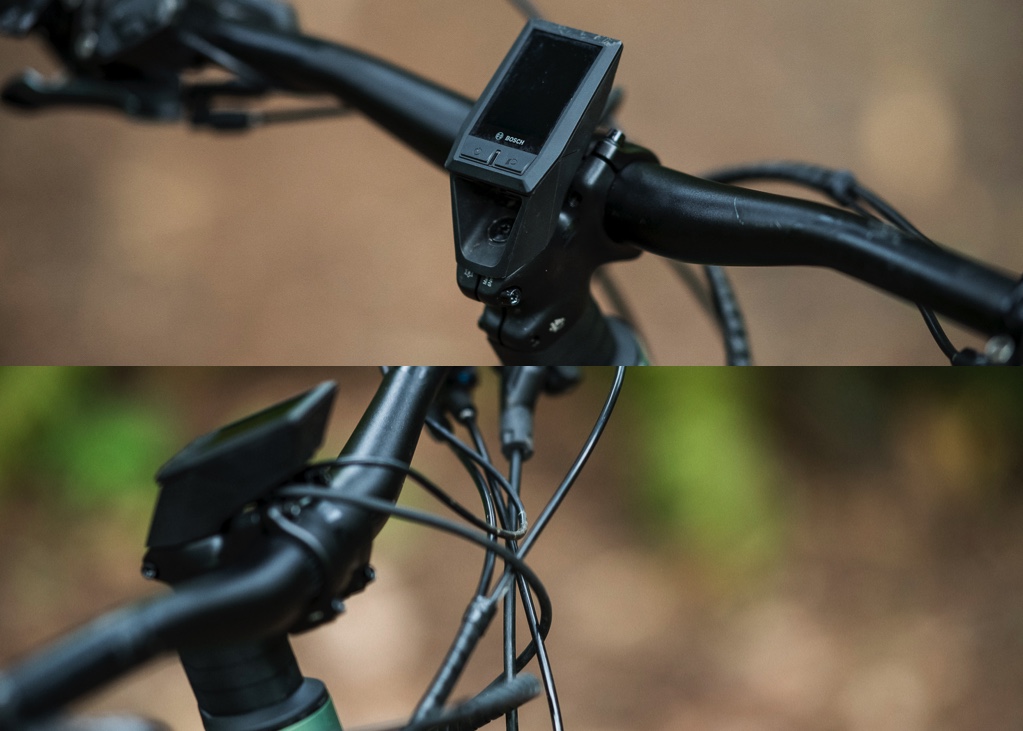 The location of the Kiox display is great for visibility, but felt a bit in the way for our liking, plus between its cables, combined with the two added TwinLoc cables makes for a bit of a rats nest up front. 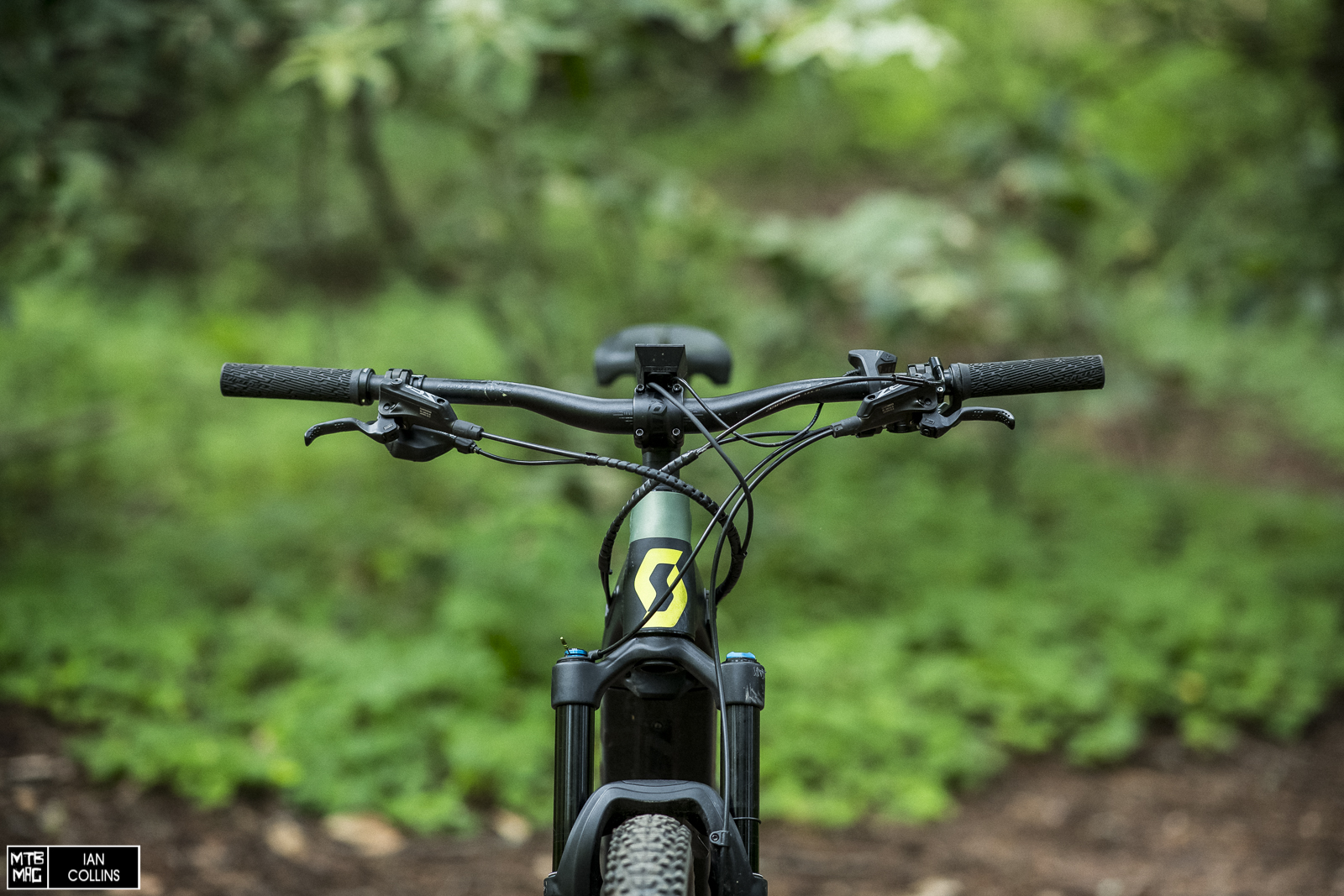 An alternate view of the cockpit region. Scott did their best to keep things organized, wrapping some cables together for some cleanliness. For the minimalists out there, you could always remove the Twinlock system to tidy things up. 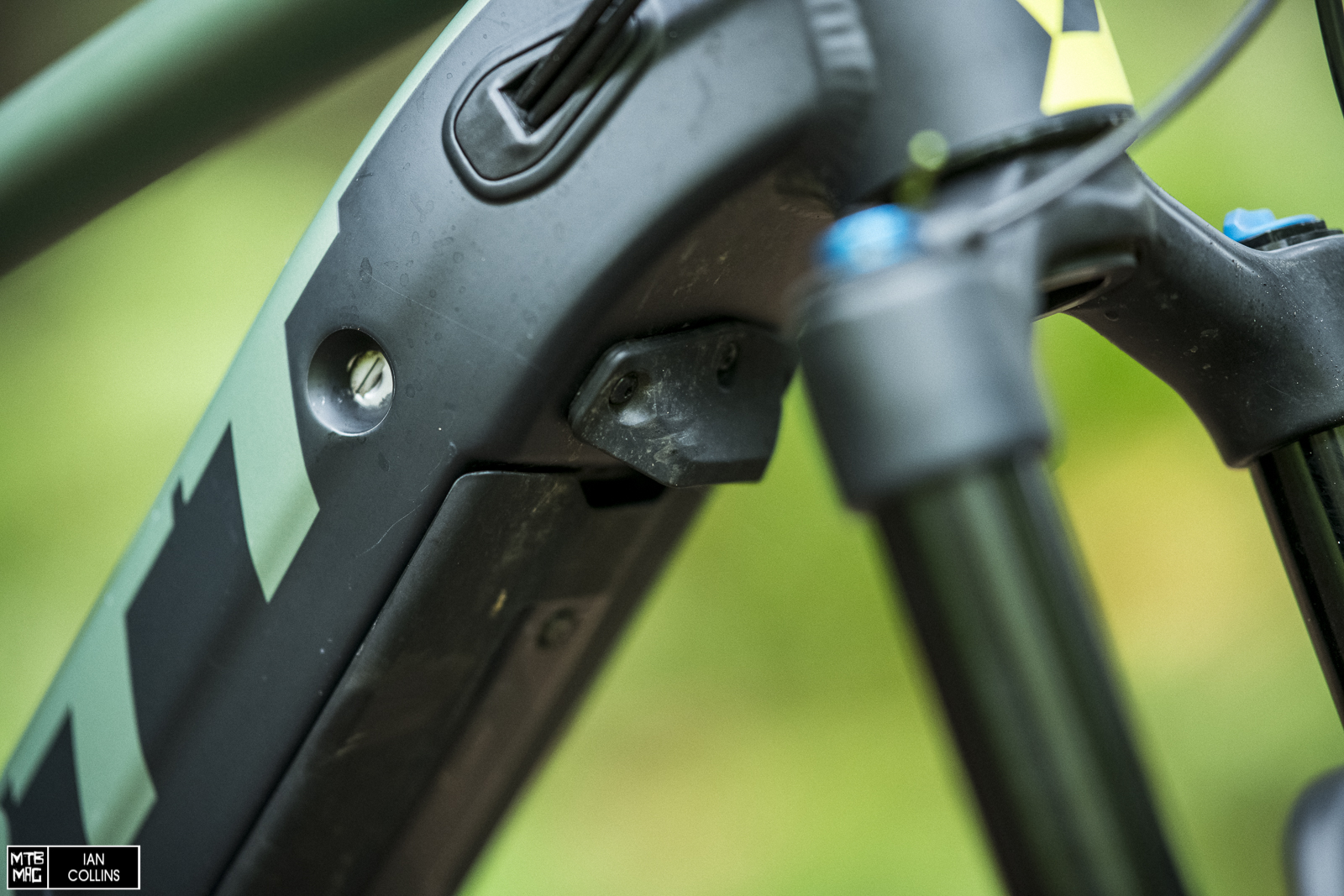 A bump-stop on the down tube ensures your bars can’t over rotate, and with the added TwinLoc cables, it’s a good addition. 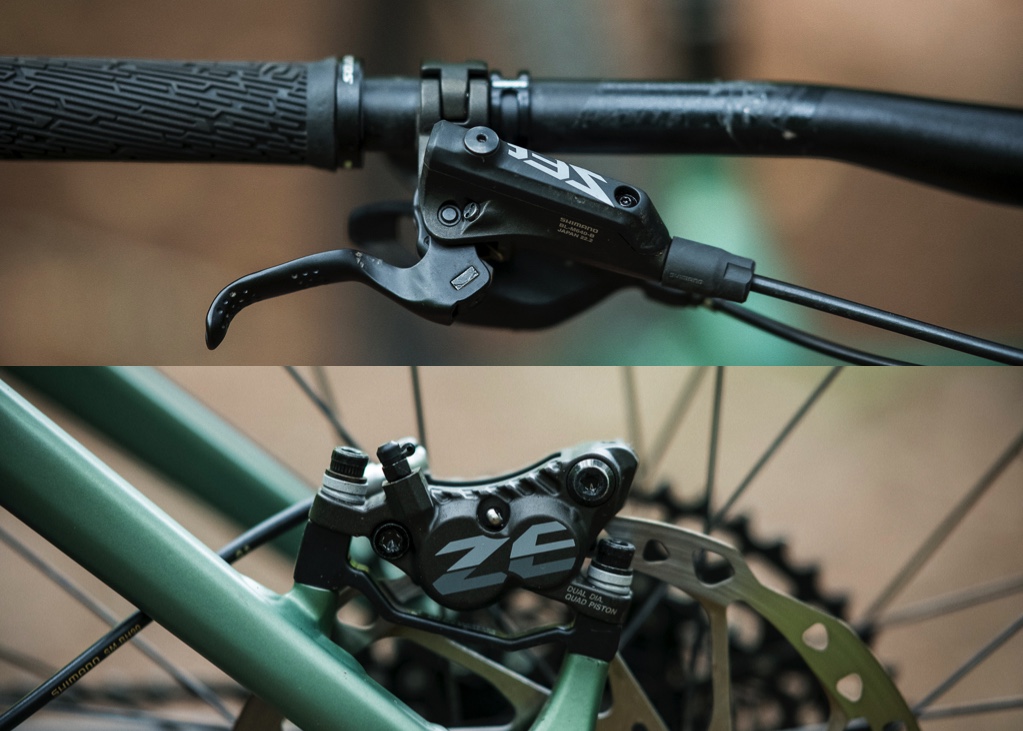 Shimano Zee brakes were a great spec for the bike. The set proved plenty powerful, especially paired with their 203mm rotors. We also really liked the textured hook at the tip of the levers. The Fox Transfer post worked flawlessly throughout our test with 150mm on tap providing plenty of travel. The lever design felt a bit outdated compared with paddle style levers, but it was chosen for a reason, due to the fact the TwinLoc lever is already on the left side of the bars, meaning a 1X style dropper lever simply wouldn’t fit. Maxxis Rekon tires front and rear felt a bit under-gunned for this particular bike. Out back, we likely could keep a Rekon on, though up front, the Strike would be better off with an Aggressor, or even a Minion DHF. 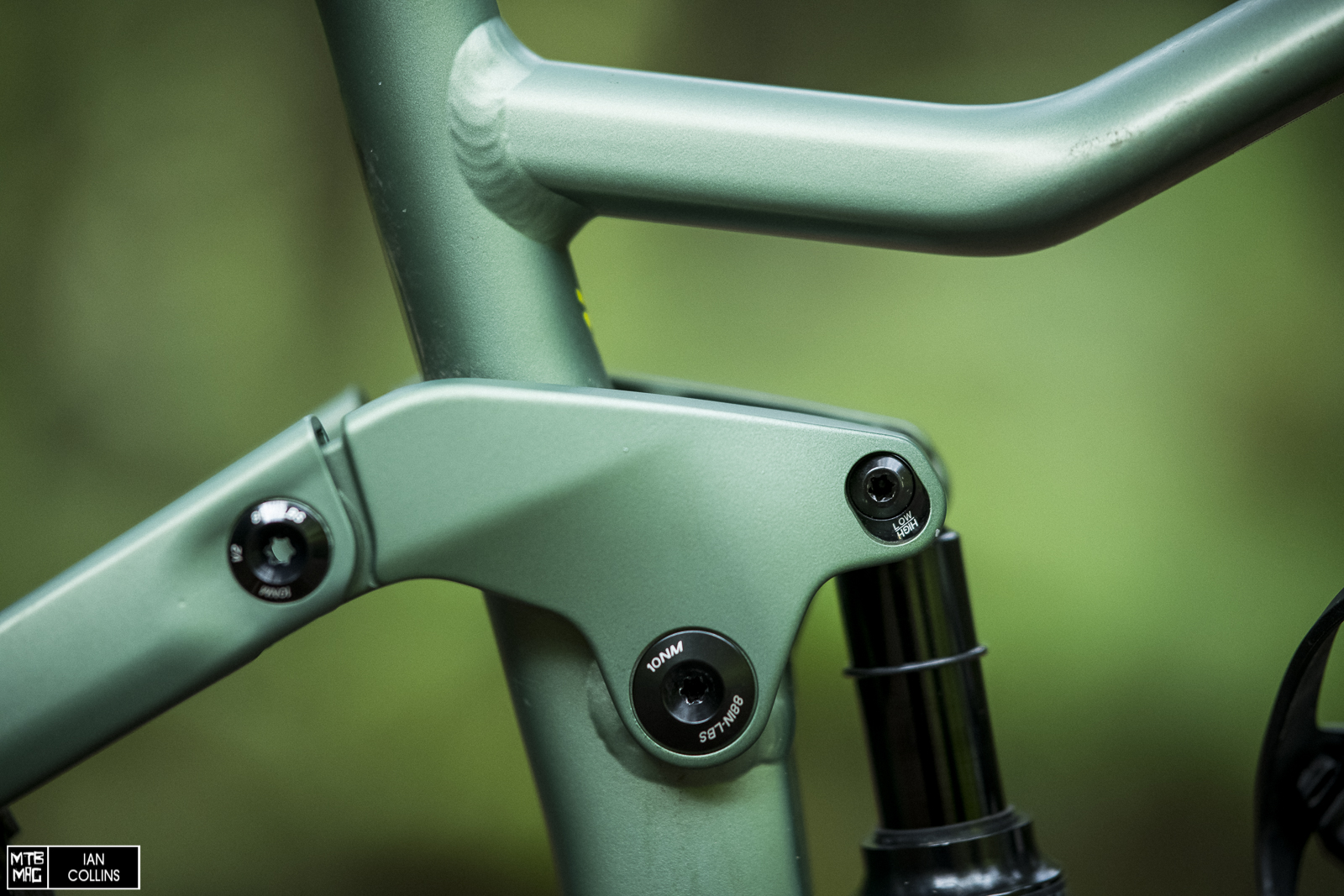 With fairly aggressive local trails, we mostly kept the bike in the low/slack geometry setting, the need for improved pedaling performance seemed to be trumped by the power e-bikes offer these days. 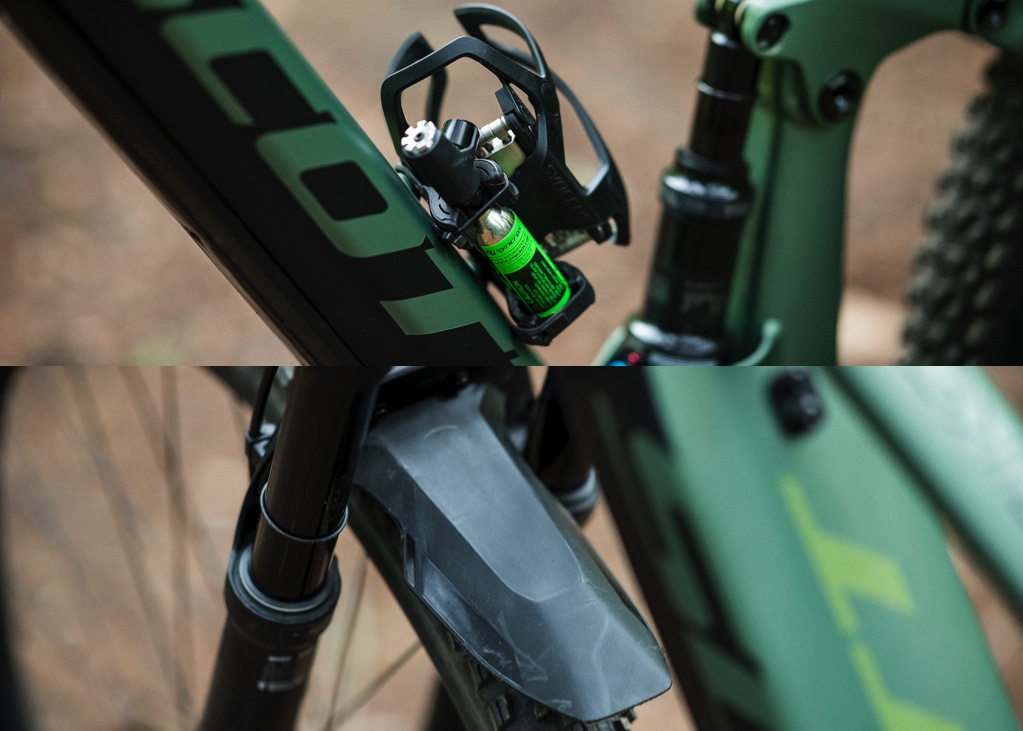 Though it’s a $64.99 add on, the Syncros ‘ Tailor iS cage CO2 Bottle Cage’ was an awesome addition to the bike, clean CO2 storage and an integrated 19 function tool had us sold. The bolt on Syncros front fender was also a nice touch, and had us relieved not to have to install a standard one with ugly zip ties. 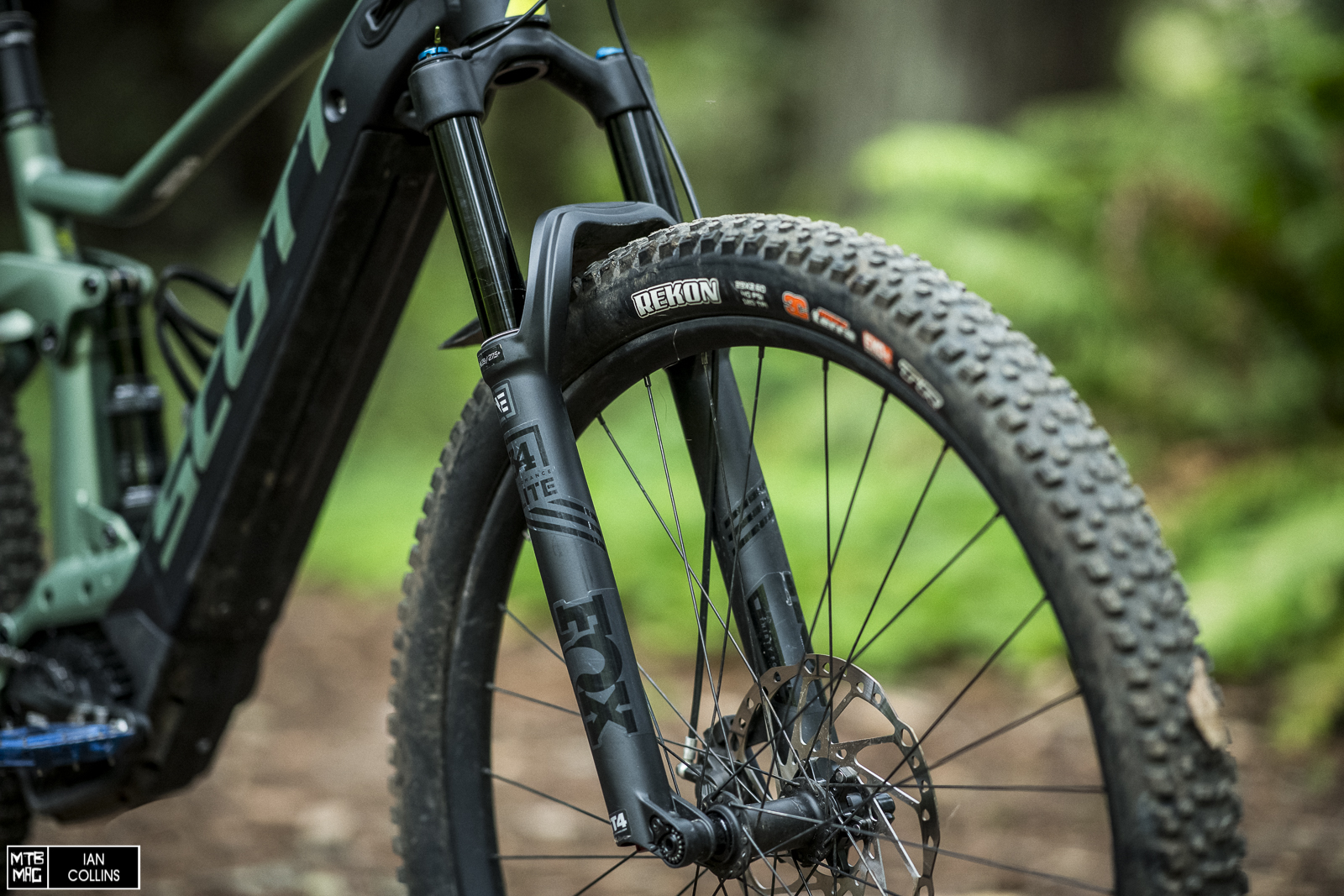 The Fox 34 Performance Elite fork performed well, despite taking it through some wild terrain at times. Incognito black Syncros wheels weren’t anything to rave about, but were notably strong, and worry free throughout our test. 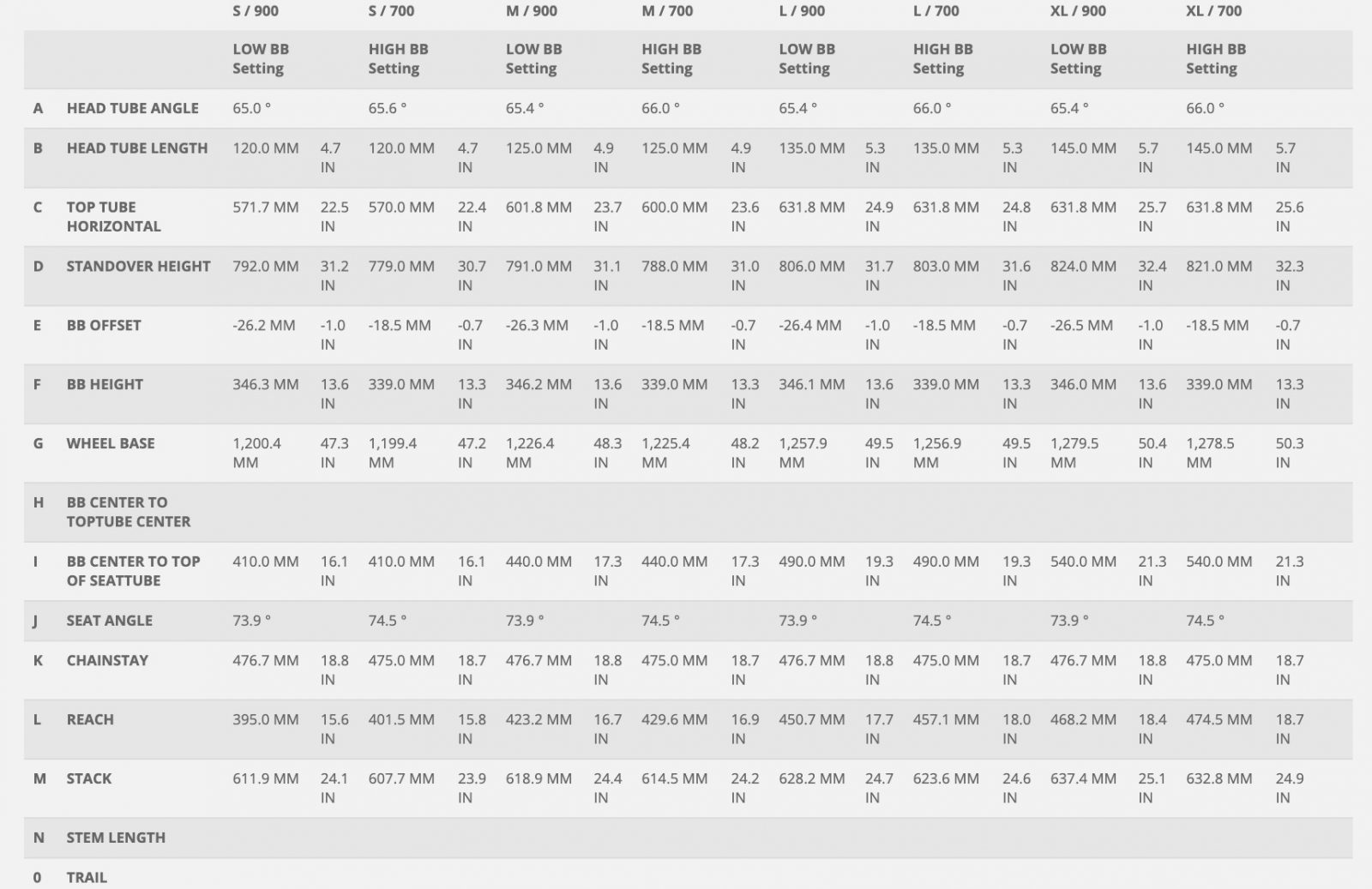 As we rode almost exclusively in the low setting, we’ll focus on those geometry numbers. The 65.4 ° head tube angle certainly isn’t the slackest, but for a bike dedicated toward more tame trails, it felt spot on. 476.7mm chainstays are long, even in the realm of e-bikes, so stability was a plus, but don’t expect to be doing any easy manuals on the bike. At 432.2mm reach, the cockpit feels quite close to the seated riding position, but not cramped per-se. The 73.9° effective seat tube angle puts the rider in a moderately upright position, making for decent climbing and power transfer.

Aimed at general purpose trail riding, the Strike 910 excelled in smoother terrain, yet jumps and steep trail didn’t pose any issues at all. The 140mm of suspension was sufficient for most trails, but in rougher sections, we felt a bit under-shocked, some of this likely just being the weight an e-bike brings to the table. The geometry made for a really reliable trail feel, it was comfortable both up and down, and seemed well suited for both a beginner, or an experienced rider. The Bosch e-bike platform proved up to the task, and the 500w battery made for long rides without the worry of getting stuck out on the trails, although there are bigger batteries popping up quickly in this fast changing market. Most short loops we tended to stay in eMTB or Turbo modes, prioritizing maximum descent time over anything else. We did a few long days, staying in both Eco and Tour modes nearly all of the ride, for the sake of maintaining battery levels, and switching to Turbo for only the steepest of climbs. For our local trail environment, we likely wouldn’t stress over finding a larger battery, as the 500w system took us everywhere we needed to go. 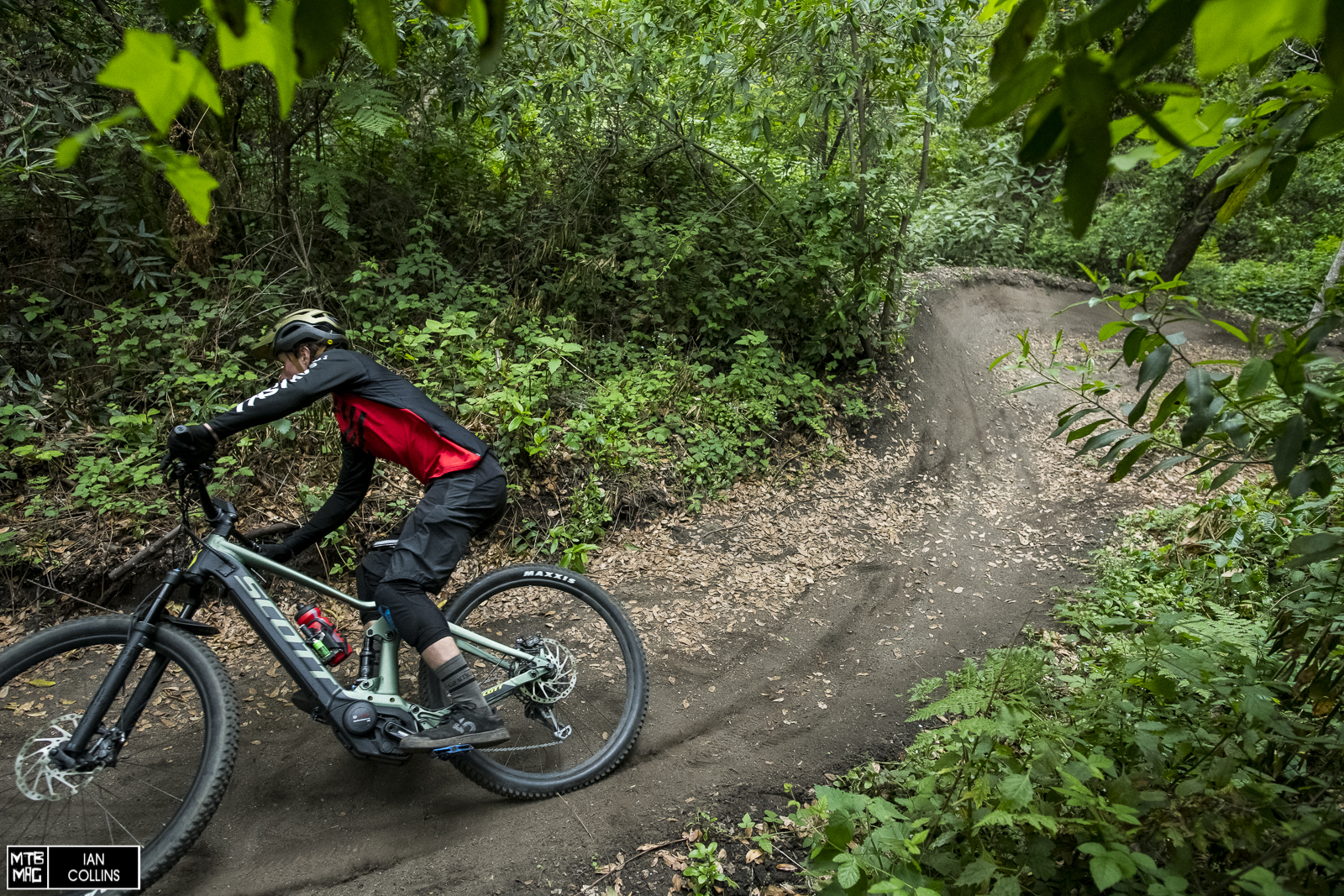 On jumps the Strike wasn’t quite confidence inspiring, but it was capable, a noteworthy feeling for a bike of its genre. At 52 lbs. it certainly isn’t the most nimble, but we found that with some persuasion, we could make shapes in the air, and get right in the pocket of tight corners. The geometry plus a solid component spec, sans a few exceptions makes the Strike 910 a ‘Jack of Most Trades’. 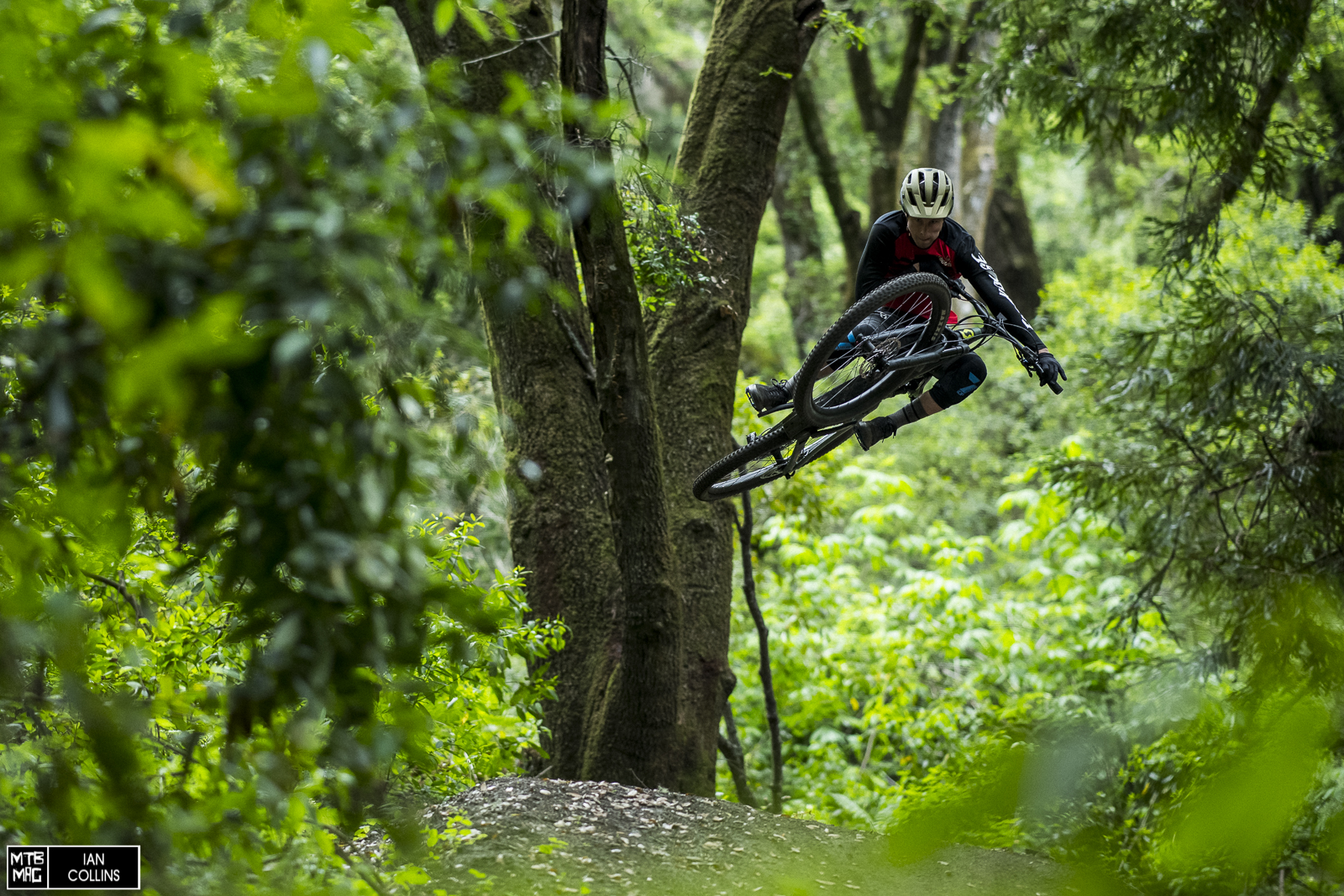 The Strike is intended to be a comfortable trail bike, geared toward the single-track enthusiast. Our tester may not fit that rider profile exactly, nor did some of the trails we tested the bike on. The meaning of all of this, is the bike certainly got pushed hard, and long-story short, impressed us greatly as far as what it turned out to be capable of. For the rider looking to enjoy their local trails, and get a little out of their comfort zone here and there, the Strike eRide 910 is a very worthy option. If you’re a minimalist who’s particular about your grips, don’t be fazed by the extra cables – you can always simply take them off.