The S-Phyre XC9 are the new XC Shimano shoes replacing the XC 90 which we’ve tested in the past. One of their best features is the carbon outsole, made by Michelin. We tested them during training and competition, at the Samarathon 2017, in the Israeli desert. 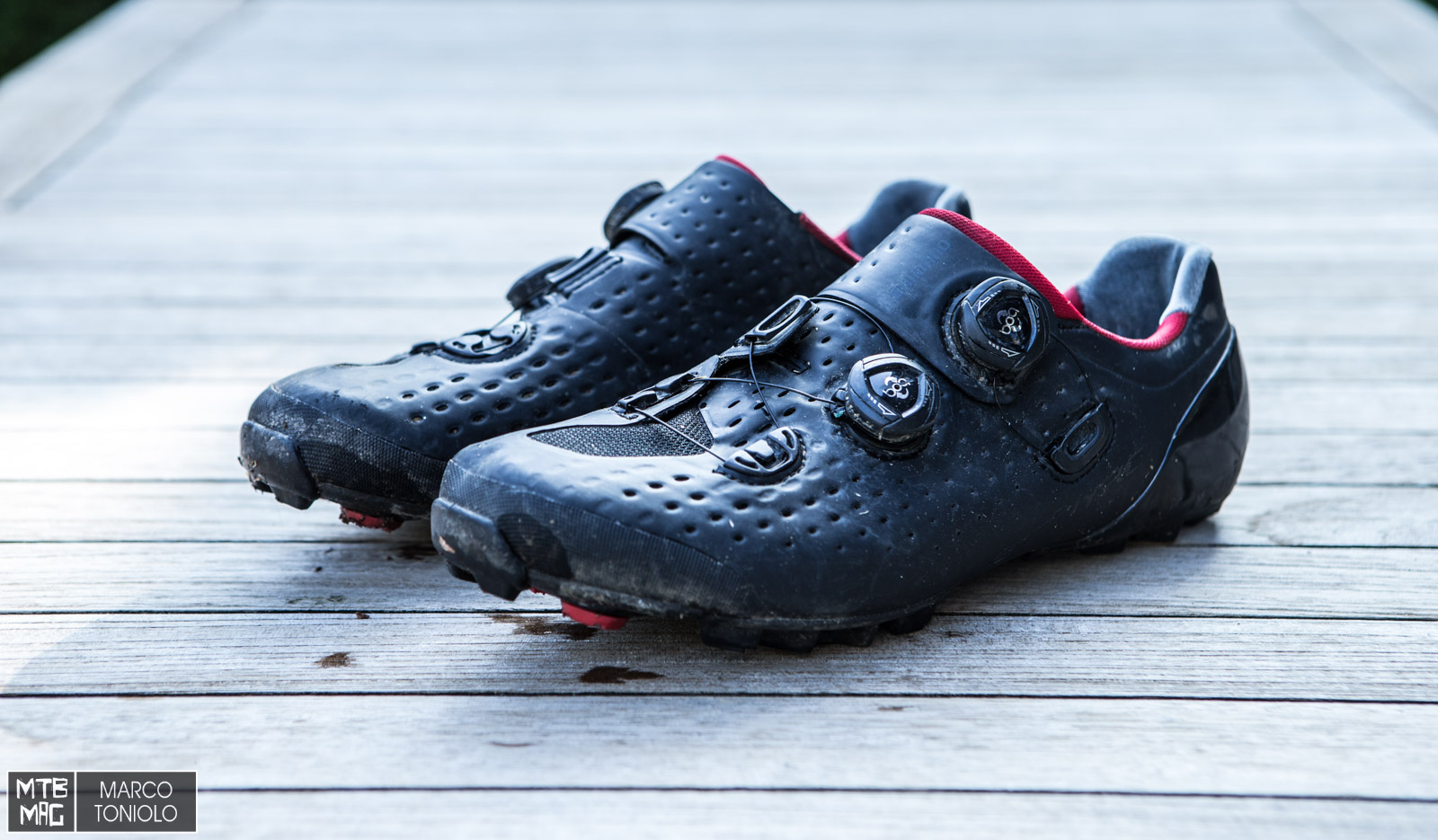 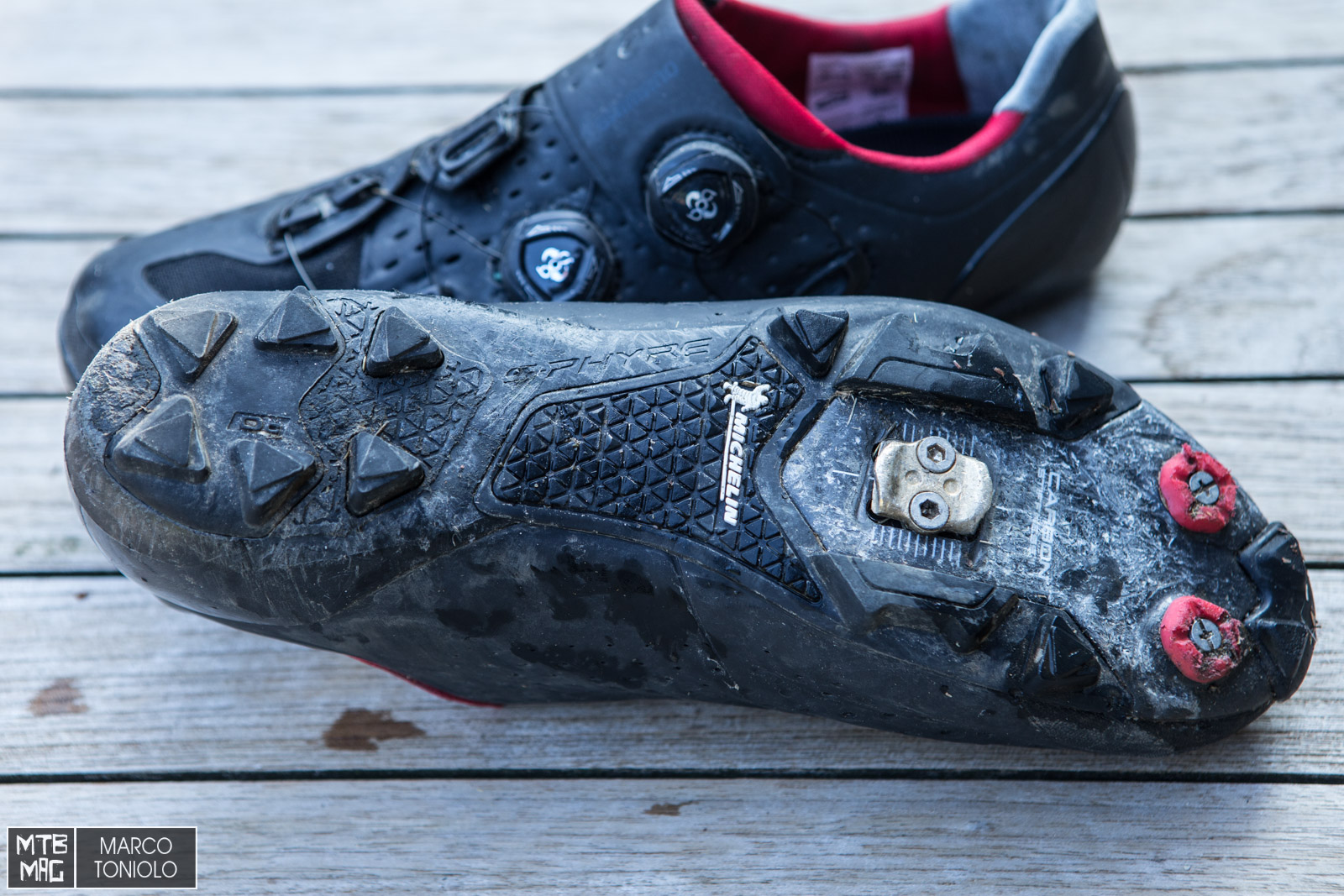 The XC9 we tested is the top model of the S-Phyre XC line, followed by the XC7. The shoes are available in black, classic Shimano blue and yellow.

The S-Phyre are made for XC riding & racing, but they are most useful whenever you’re looking for high pedaling performance, thanks to their light weight and stiff carbon sole. We used them while also riding enduro and trail bikes, most of all to test the Michelin outsole behavior walking on rough ground. 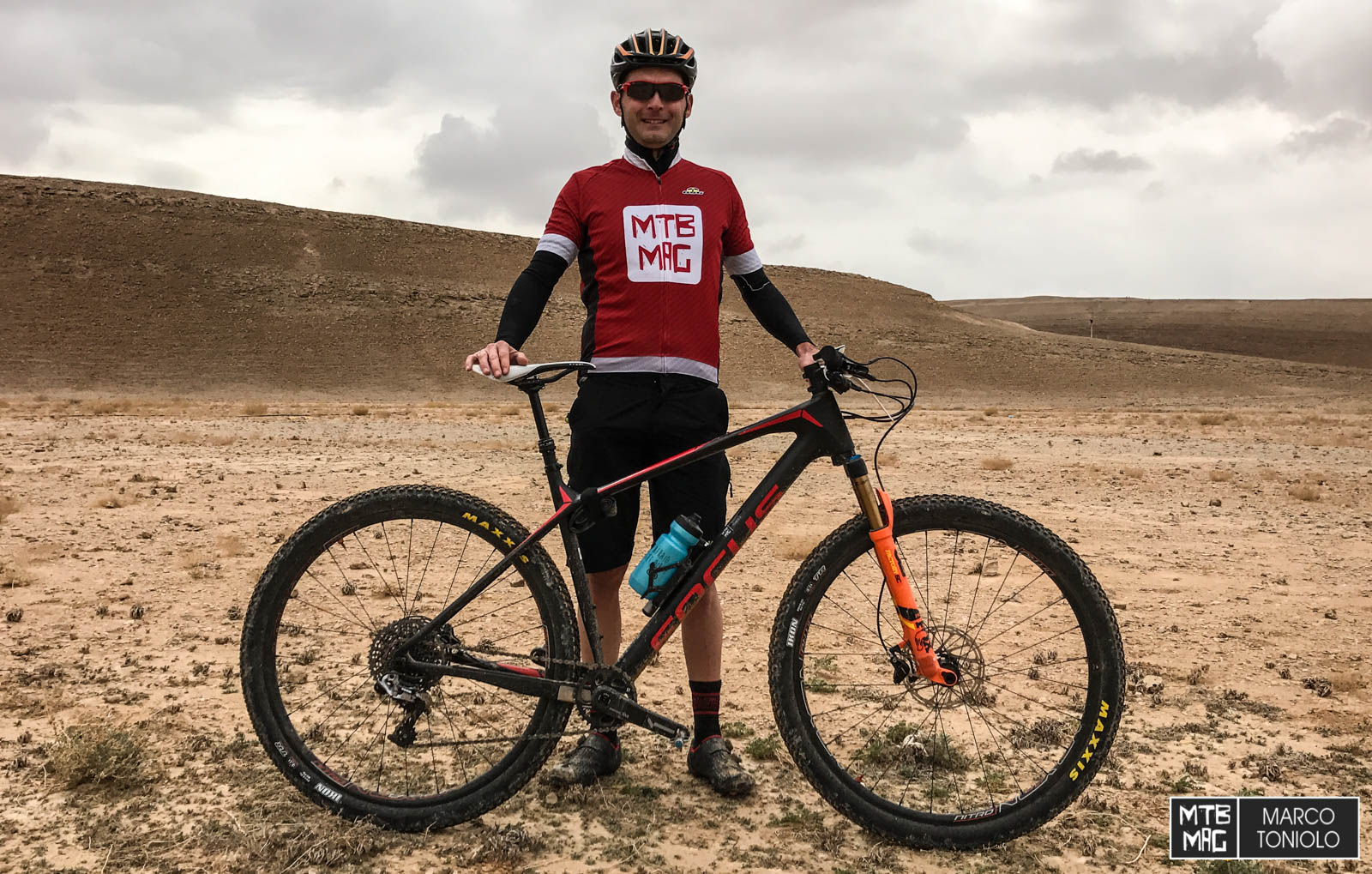 Out of the box they are very comfortable, with no hot spots. Our rider has wide feet but, thanks to the precise BOA double lacing system, he could find the perfect adjustment for the instep and the lower foot. This is not to be taken for granted since with only one BOA closure, it can happen to tighten it too much at the instep level.

The upper lace can be opened, making it much easier to put the shoe on. 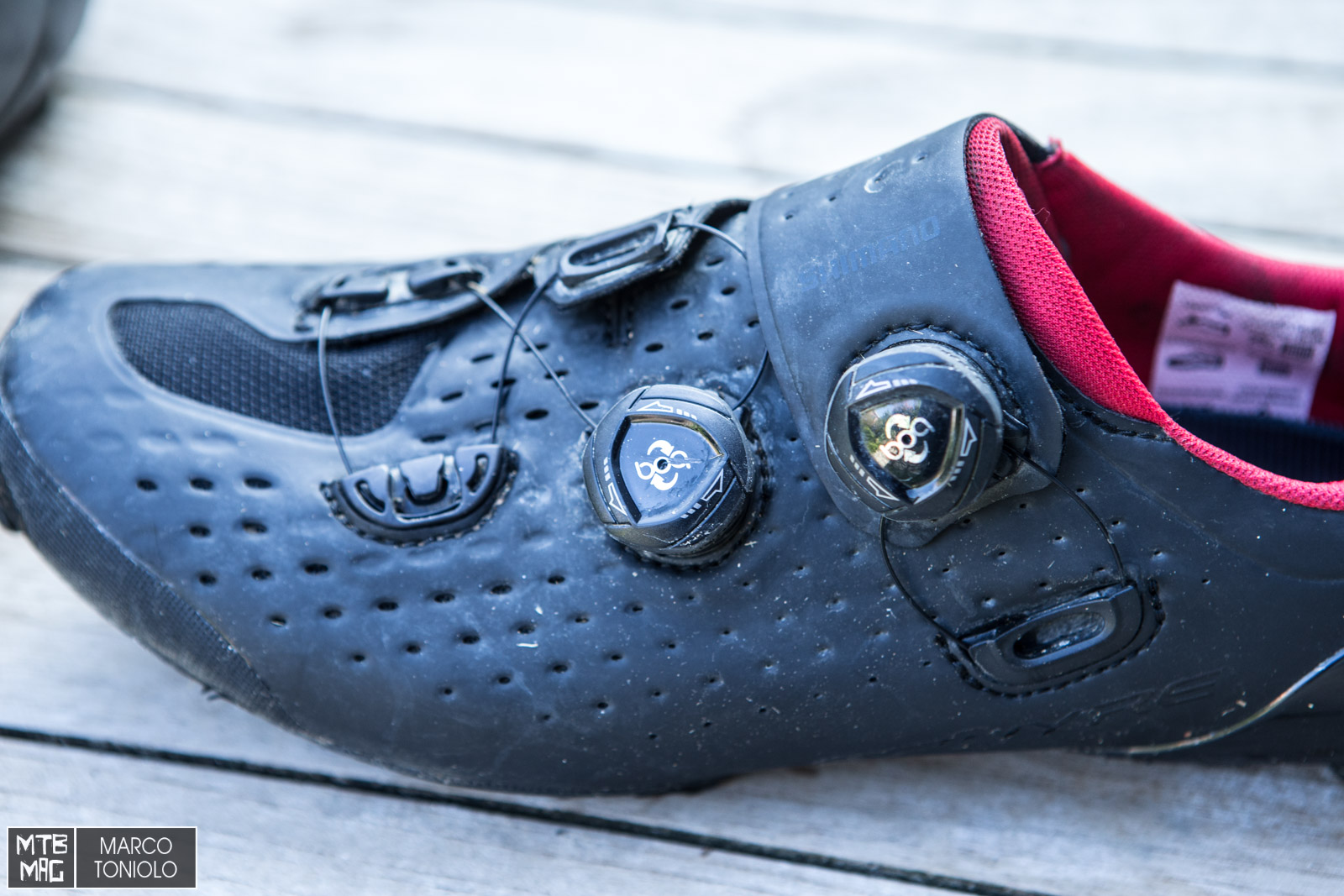 The upper material is really soft but not too much, like on the previous model, on which the upper tended to lose its shape and was easily cut by rocks. Our XC9’s are still in good condition thanks to the reinforced heel and toe cap.

All in all, these shoes fit really well and are so comfortable we can say you almost “don’t feel them” even after hours of riding. You don’t need to break them in to let them adapt to your foot’s shape. At the same time the carbon sole ensures maximum power transfer to the pedals and an adequate support even with really lightweight, smaller pedals like the Eggbeater.

It is hard to have a good grip walking on a carbon sole; but the soft compound of the Michelin outsole helps to avoid slips while providing good grip on wet surfaces. We were really impressed by the grip performance during a 4 hour ride where there was still some snow on the track at higher elevations, and we were forced to carefully step on some stones carrying the bike. The carbon sole got scratched up but we didn’t slip once, indicating the rubber bits are well placed. The cleat is placed deep enough between the rubber parts so it doesn’t touch the ground too early, avoiding that “tip-tap effect” which makes you lose your balance.

The toe cap has been improved a lot as well. The reinforcing rubber covers the entire front part of the shoe, protecting from impacts with small pebbles and rocks. 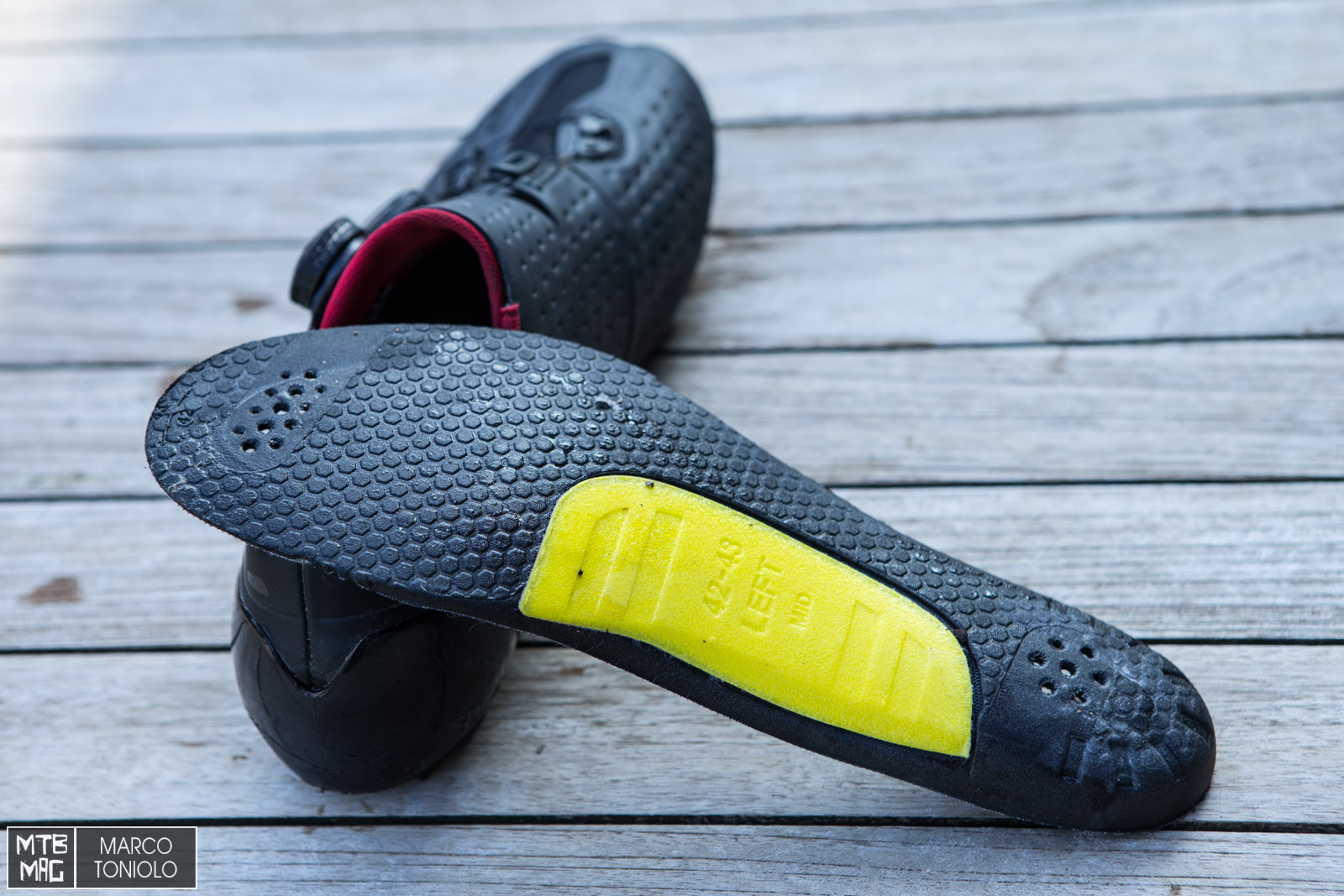 The arch support can be combined with an additional insert available in 3 sizes, according to your foot’s shape. Our rider tried the medium insert and had no issues.

It is hard to find any low points to the Shimano XC9. It is clear that the Japanese company learned from the past experiences and offers a lightweight and comfortable shoe, with high pedaling performance in terms of power transfer. The Michelin outsole makes it easier when you have to walk, considering that these shoes are made for the XC/Racing segment.