Around the time that the new Enduro rolled out, Specialized also announced an update to their Butcher tire with a new Grid Trail casing. This thicker casing sees beefed up support throughout, and is said to have “increased its pinch flat protection by 15% and puncture protection by 30%”. The tread pattern and compound have also been updated compared to the original Butcher from a few years ago. Roughly speaking, in terms of duty, this new revision falls between the previous “Grid” casing and the more rugged “Black Diamond” casing – meaning it should be better suited to modern trail riding. 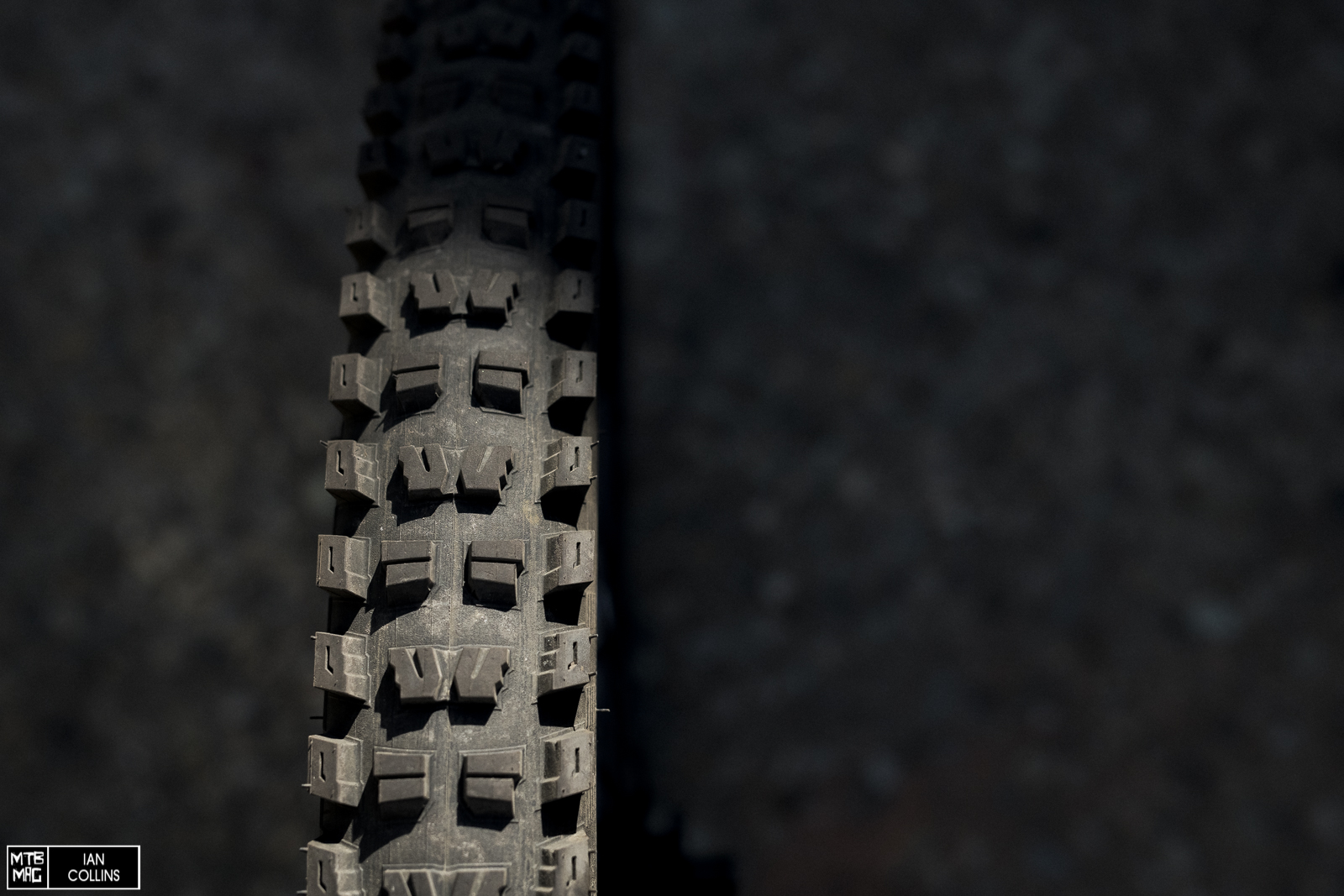 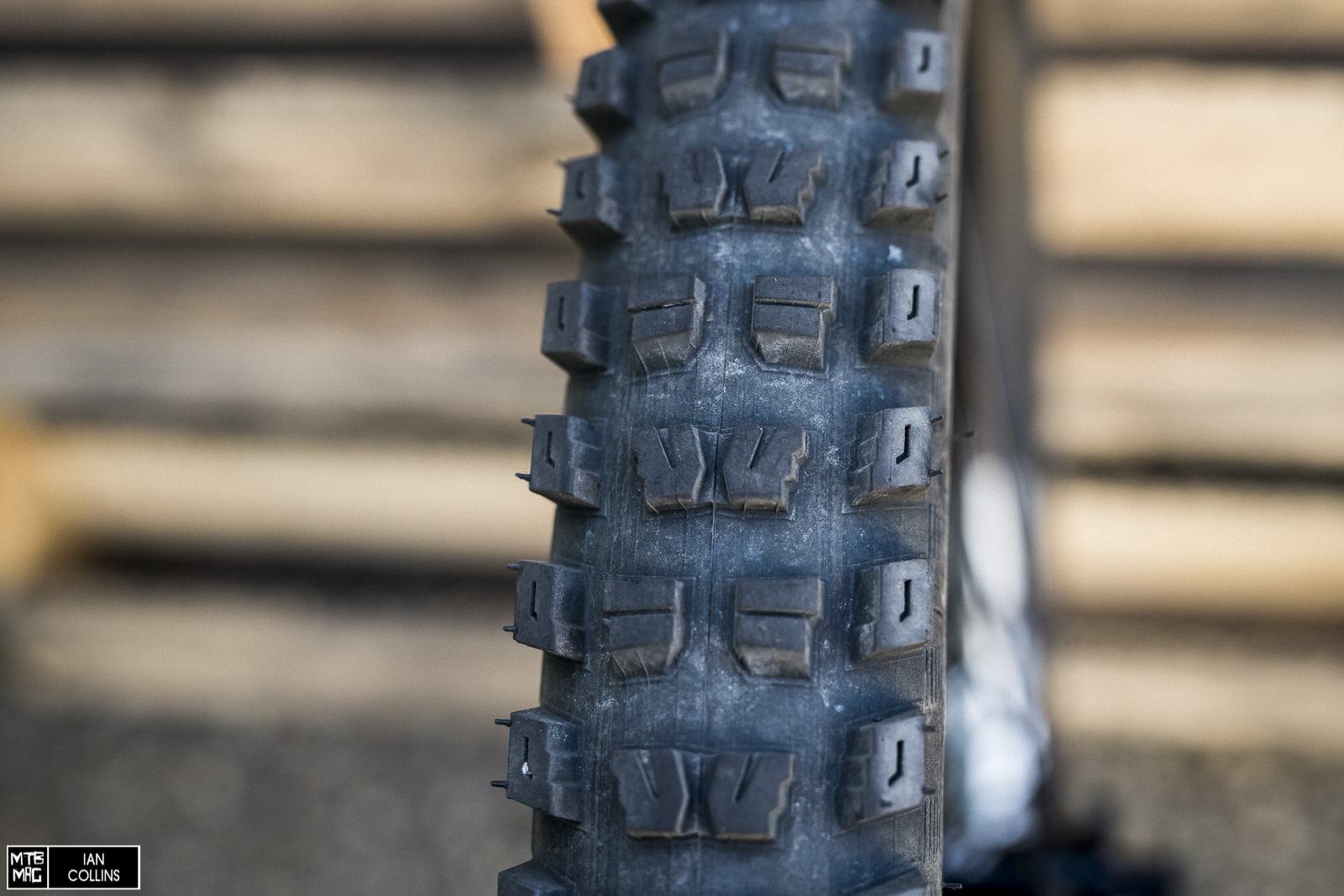 Originally designed by Sam Hill way back in the day, the Butcher’s current layout hasn’t strayed far from its original tread pattern. In the last update a couple years ago, the knobs received some tweaks to their shape – namely the “Sawtooth” inside edge on the corner knobs as well as on the outside edge of every other center row. 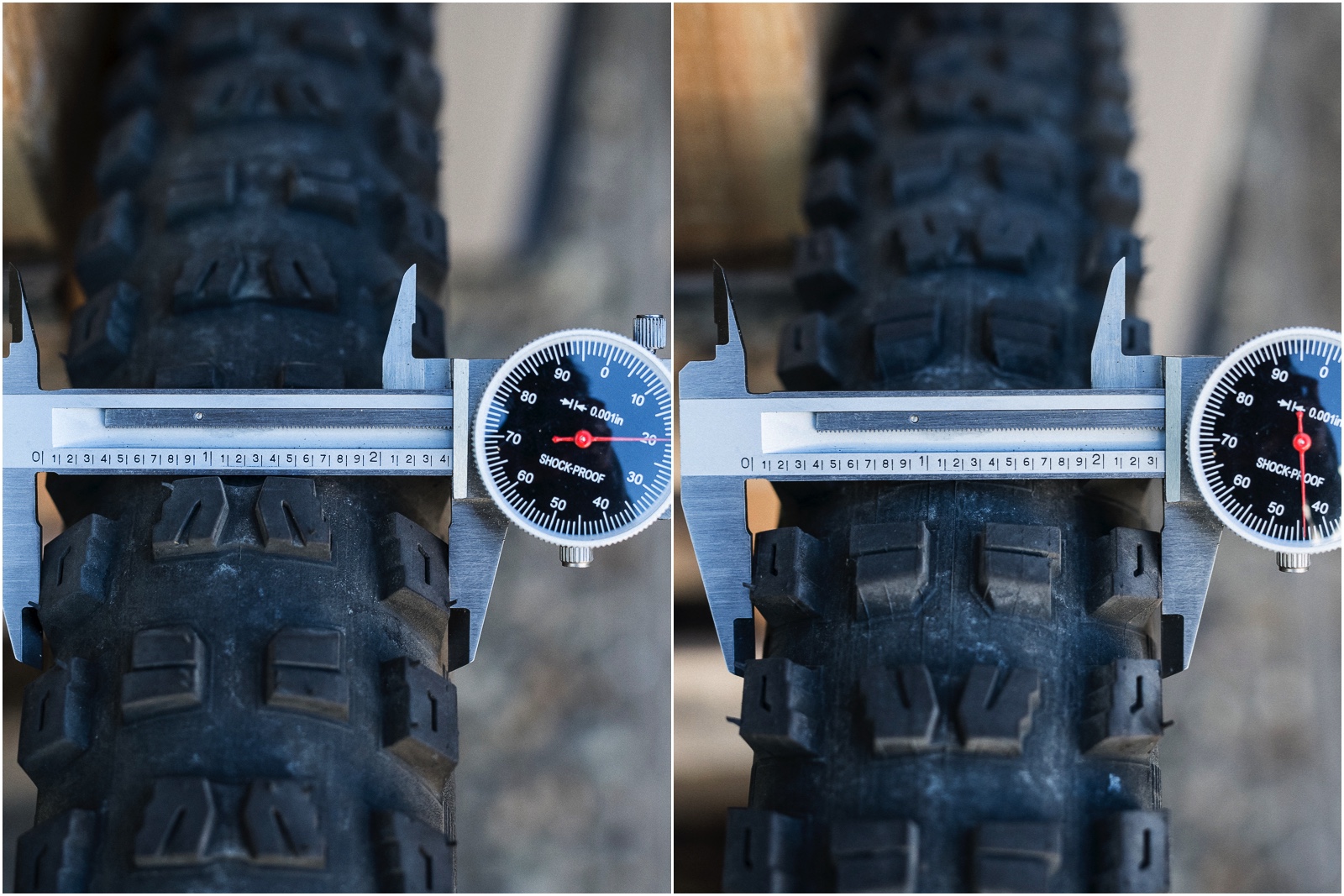 While the widths didn’t quite stack up to be perfectly accurate, it’s worth expanding on more that what’s revealed in the photo above. The 2.6″ came in at just over 2.4″, and the 2.3″ came in at 2.34″. While that might suggest that there is hardly a difference in size due to their closeness in width, that isn’t quite the case. The 2.6″ had quite a bit more volume, was taller and had a rounder shape. Personally I prefer a slightly rounder tire up front and a slightly more squared off tire out back, so no gripes from me. Speaking of inaccuracies – it’s worth noting that these did come in at 166 grams over their claimed weight for a pair, which is substantial enough that it warrants mentioning. 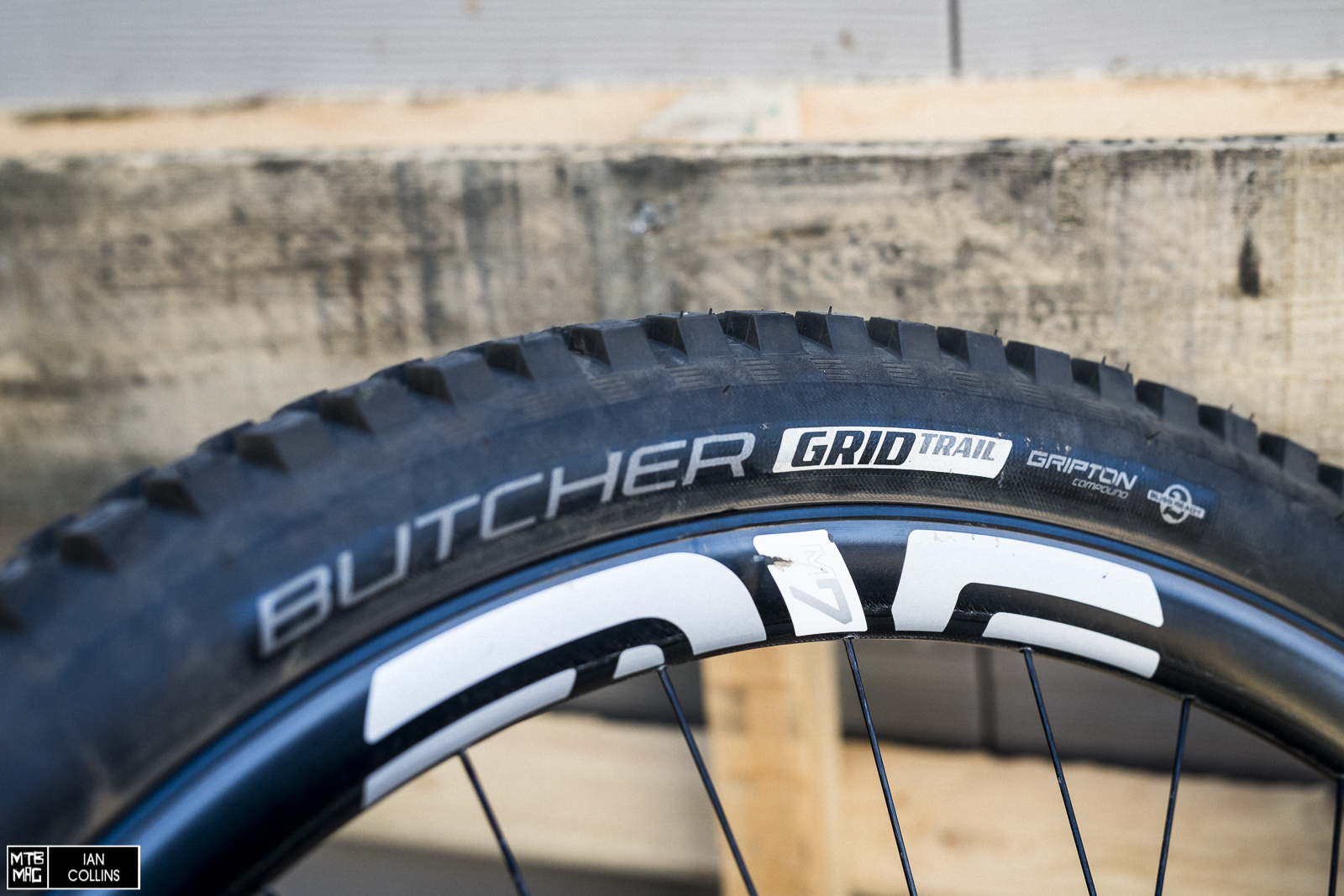 A big part of the story here is the new “Grid Trail” casing – as mentioned earlier, it sits between the old Grid casing and the Blk Dmnd carcass. By adding new layers of reinforcement, this brings the Butcher to a very usable, middle of the road weight and thickness that will appeal to most trail riders. For longer travel applications in extra rocky areas, some riders will still want to consider the Blk Dmnd – at least out back anyway.

Out of the gate I was able to run the new Butchers at lower pressures than I had been able to before – and not just two to increased confidence that I wouldn’t pinch flat … There is also the issue of sidewall support in the corners. Right away it was apparent that the new casing lands right where it should in terms of duty and I couldn’t definitely feel the increased support on trail, mainly in snappy corners and on flat landings. Personally, I’m not one to mess with low pressures, but for what it’s worth these felt just right at around 23PSI front and 25PSI rear. Considering how aggressive the knobs are, and how soft the rubber is, the Butcher actually rolls along pretty quickly, without too much fuss. With absolutely no science to back this up, 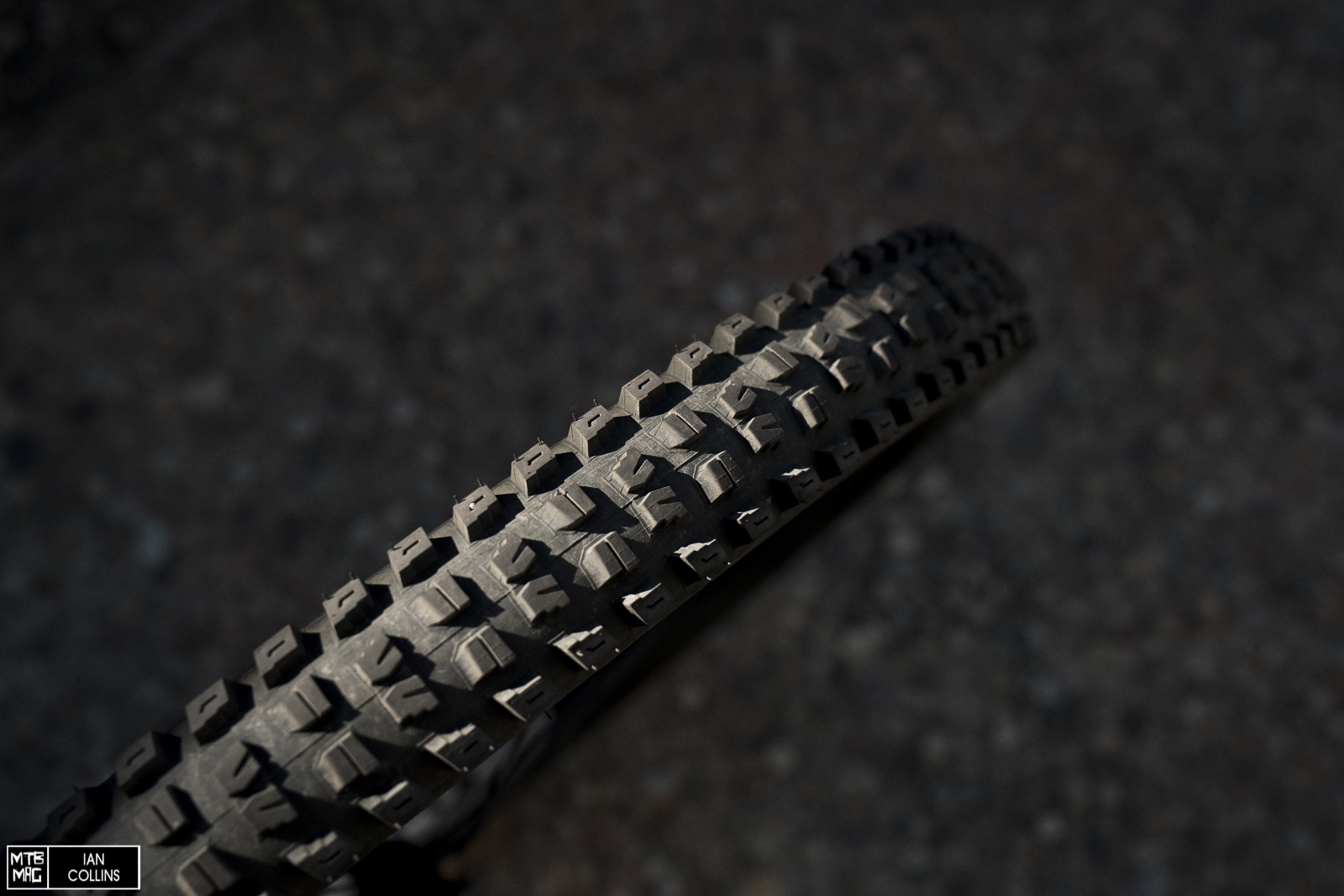 Braking and cornering are both standouts with this tread pattern, as you can really feel the tire dig in nicely in a wide range of conditions, from hardpack to loose to deep loam. If there was one complaint with the tire, it wouldn’t be that the rubber compound isn’t soft enough, but rather that it isn’t slow enough. Generally, when a rubber compound doesn’t have something in it to slow down the rebound, it can be a little pingy and slightly unpredictable – particularly in loose over hardpack type conditions. While I think the rubber compound does strike a pretty good overall balance between traction, durability and frequency absorption, I think the ride quality would improve if the knobs didn’t snap back as quickly and the tires would be less nervous in hairball situations.

As far as clearing mud goes, the Butcher did seem to pack up in mucky conditions a bit more than its slightly spikier competitors like a Schwalbe Magic Mary, but with rows of 4 knobs across and broad channels for clearance, it was pretty darn good overall and rolls faster than Magics. Lastly, on the topic of size and volume, I personally wouldn’t run a 2.6″ front and rear, and most likely wouldn’t go 2.6″ out back with any tire. But the combination of 2.6″ up front and 2.3″ out back was nice – suitable for modern trail riding. Added volume up front provided a bit more give and float up front, making it easier to confidently weight the front end. Out back, the lower profile and more squared off tire didn’t fold as easily under heavy weight, and was easy to punch into ruts and catch berms. If I remember correctly, the last 2.6″ Butcher was a bit bigger than this. Riders who aren’t really a fan of “plus” size and high volume tires should not shrug off the new 2.6″ – the volume is not overblown, but rather, it is right on the mark.

In the grand scheme of things, the big story here is the “just right” casing. In the past, the lighter duty version of this tire was a bit flimsy, but now it has received the beefing up that it deserves. It also sees a few other small, but worthy refinements … The Butcher is a classic tread pattern that isn’t going anywhere anytime soon and rightly so. It’s a great all around tire that zips along pretty quickly despite its aggressive looking tread. While I think most riders in most situations will appreciate the soft compound, I can’t help but wonder if the tire would be that much better if it remained just as soft, but had more of a slow rebound feel. In any case, one thing is certain – at just $60 per tire and pretty darn good long term durability, Specialized is offering far better value than just about all of the competition – that’s for sure.