The Specialized Butcher has been around for quite some time now, but it’s recently undergone what is perhaps its most significant reworking thus far. Originally developed with input from Sam Hill roughly a decade ago, the Butcher has been a mainstay amongst other classic mountain bike tire favorites such as the Maxxis Minion or the Schwalbe Magic Mary. The point being, it has staying power. Not a brand that rests on their laurels, Specialized continues to improve the tire every so often. The latest refinements? Well, the big news is the T9 compound, which features improved slow rebound properties compared to its predecessors. This serves as proof that Specialized has been listening. For the last couple of years a great many people have spoken highly of the Butcher, but have been crying out for a rubber compound that isn’t quite as nervous – T9 is the answer to those complaints. 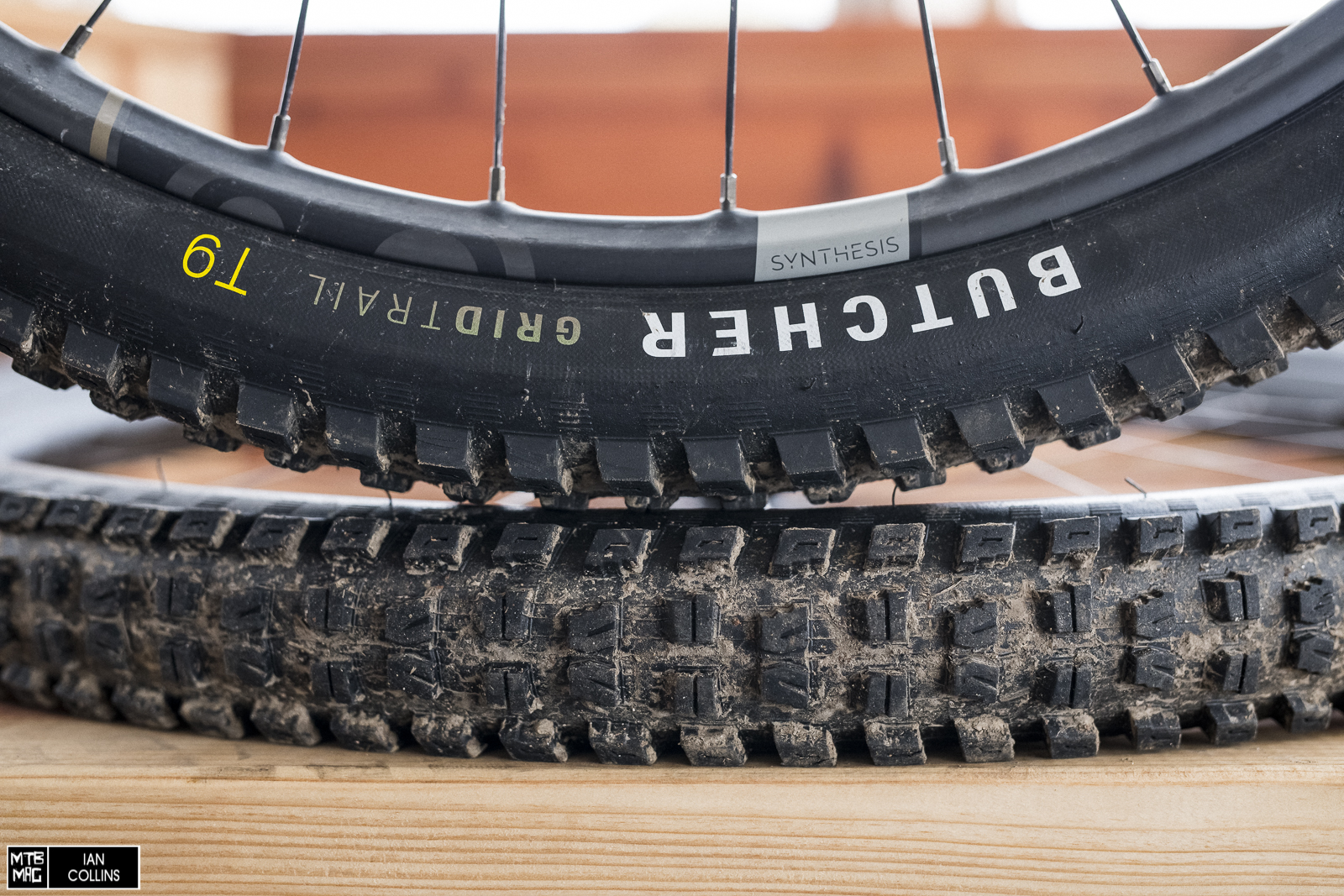 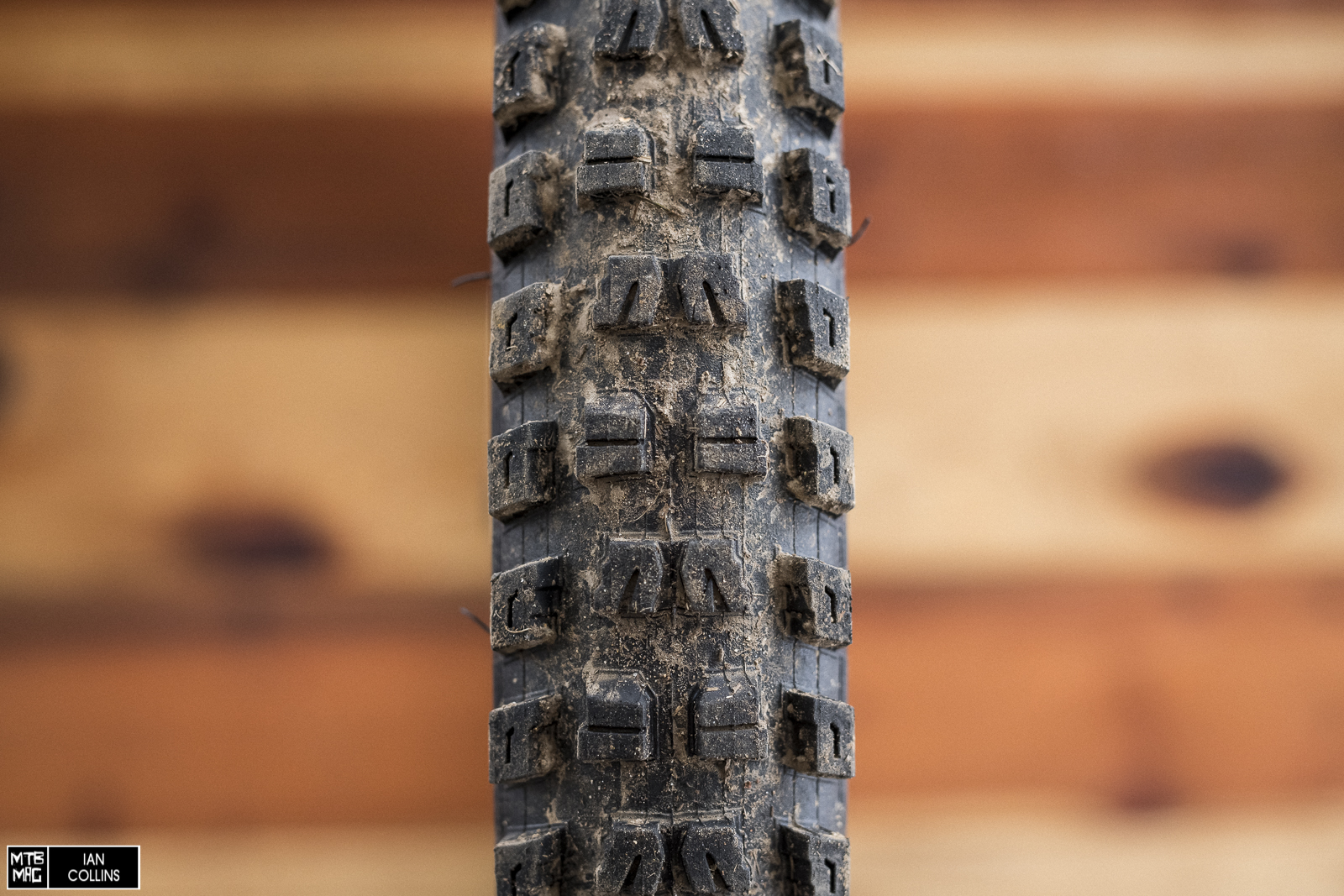 If this looks familiar, that’s because it should. Over the years the knob profile has undergone slight tweaks, but the overall footprint remains much like it has been since the early days when it was winning World Cup DH races on Sam Hill’s 26″ bike. Looking at the sipes running every which way, you can see that a great deal of thought has been put into precisely how the knobs squirm under their respective loads. 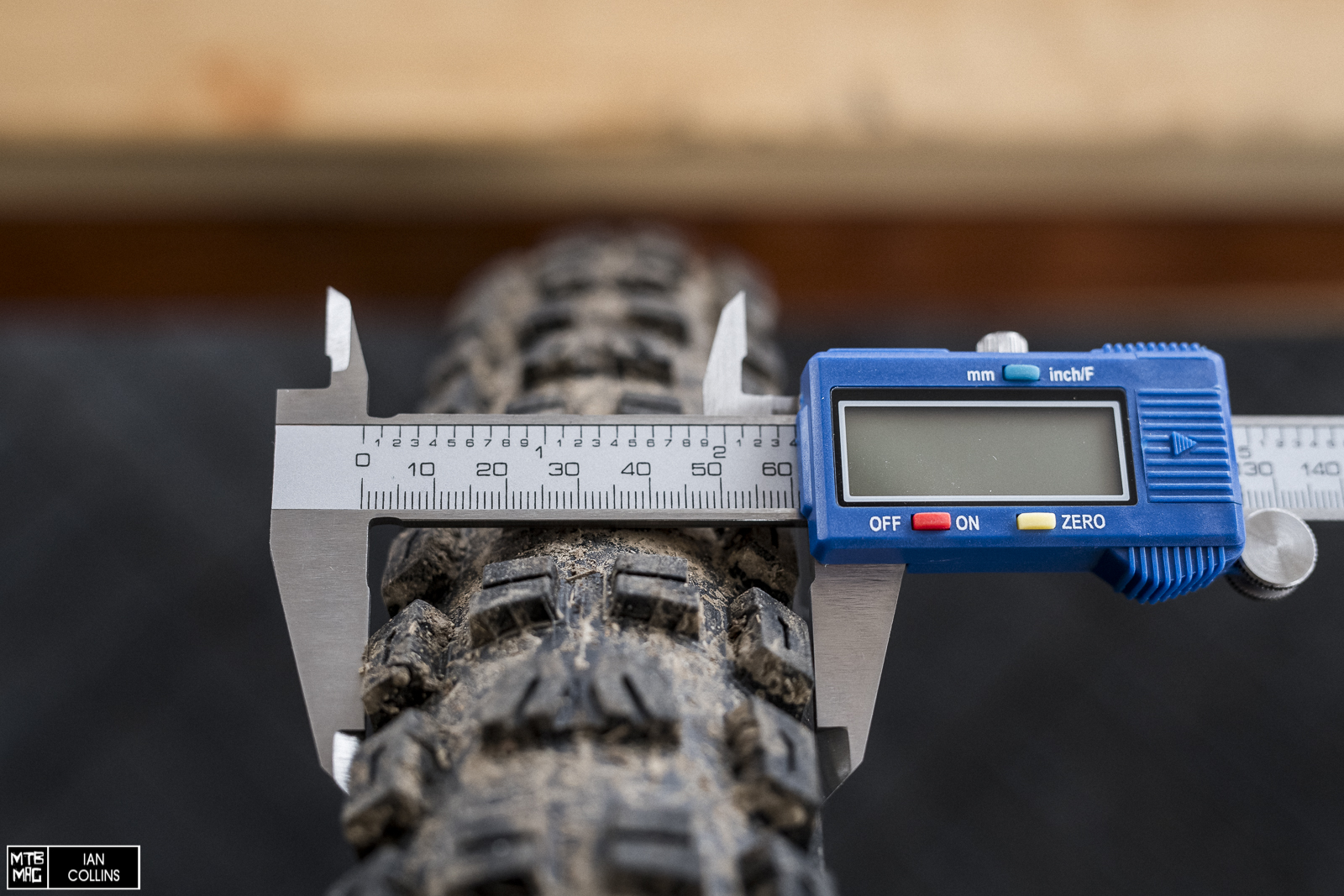 So, my calipers have succumbed to a dead battery due to either cold weather, or too much use. In any case, as you can see above, the 2.3″ tire tested here actually measures at a pretty dead on 2.4″ width. For what it’s worth, a 2.6″ is also available. 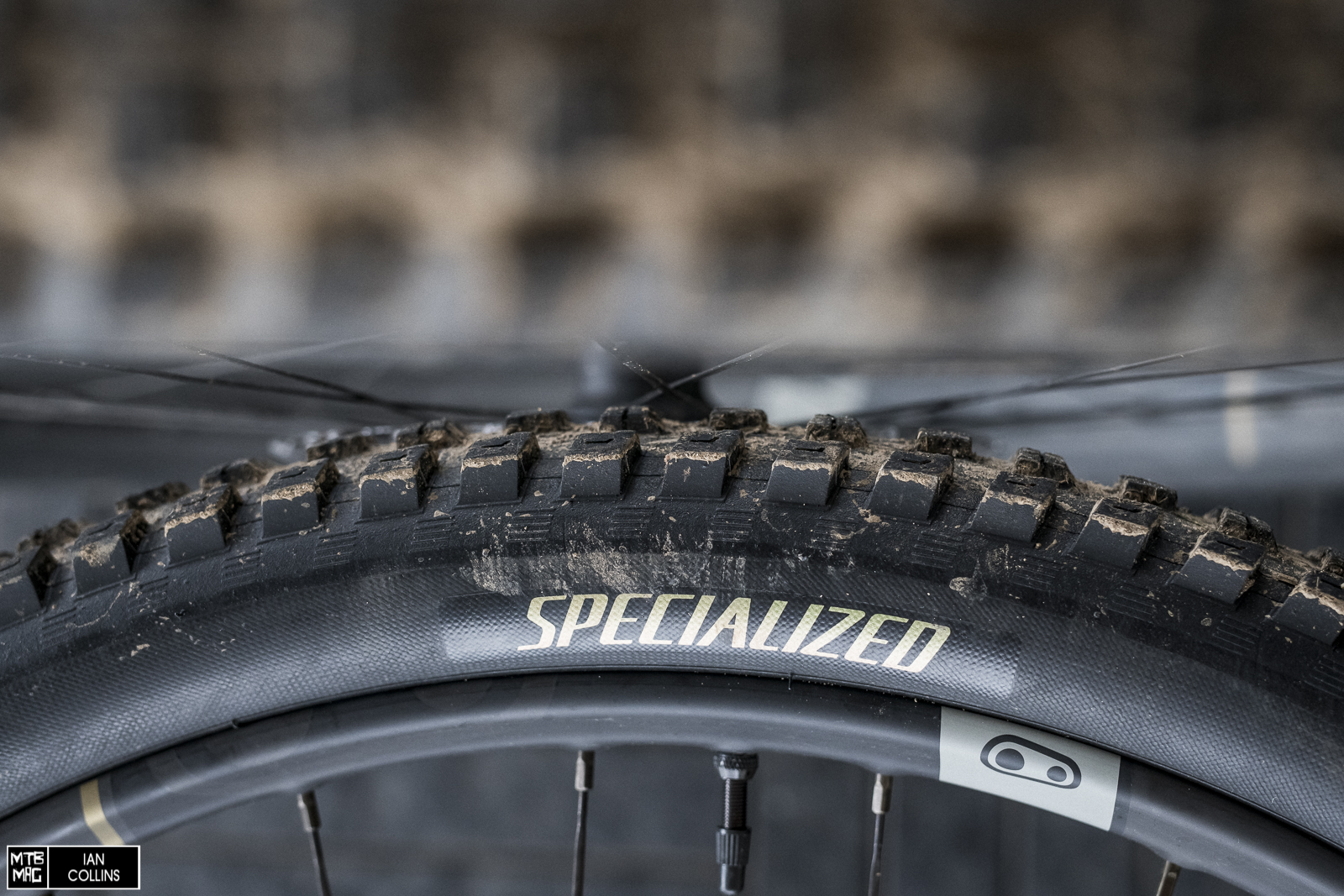 The old nomenclature with Specialized tire casings went: Grid, Grid Trail and BLK DMND. These days there are simply Grid, Grid Trail and Grid Gravity moving from lightest duty to heaviest duty. All three levels see improved pinch flat and puncture resistance to varying respective extents and pick up a bit of weight in the process. 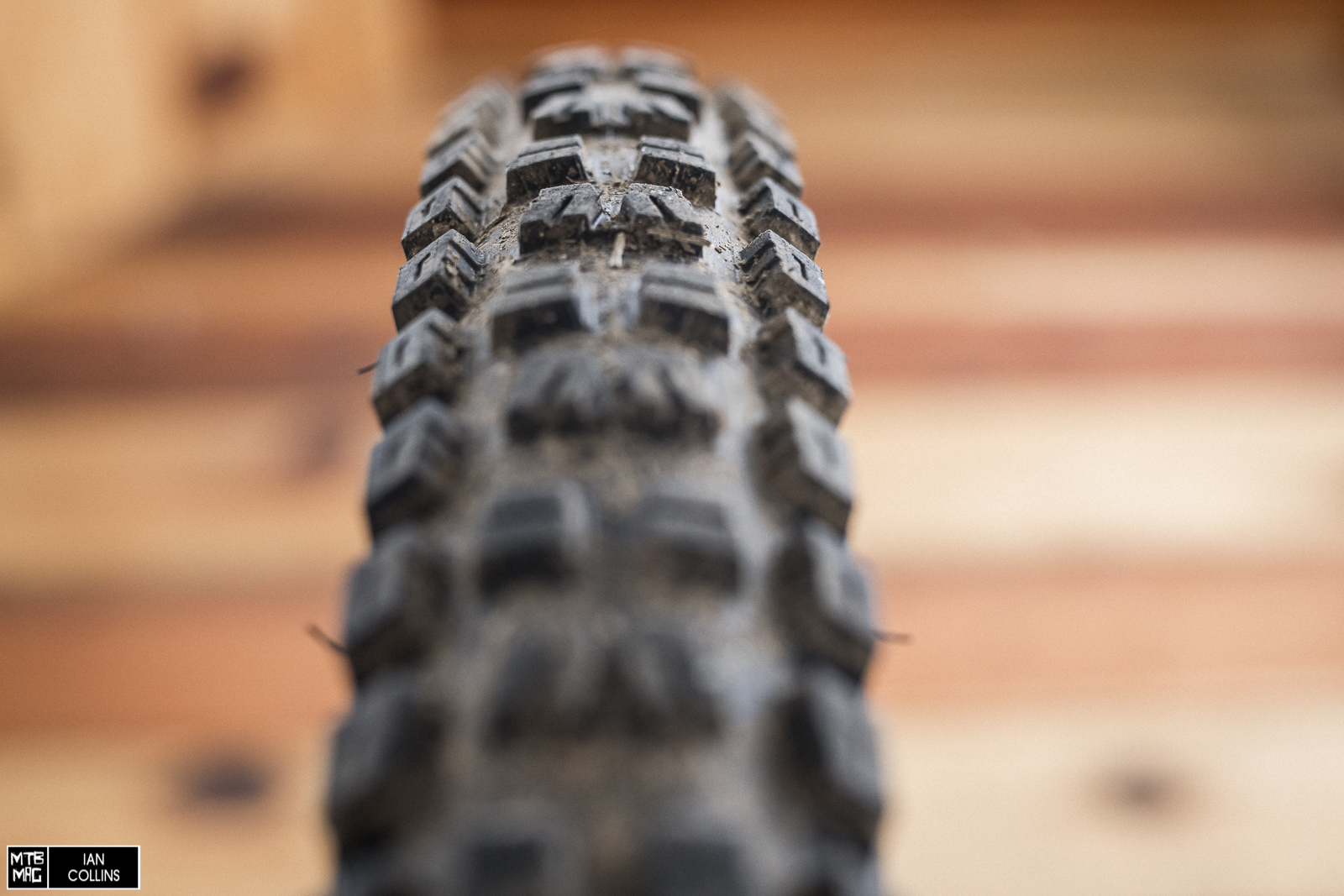 Looking at the tire’s profile, the Butcher features a profile that doesn’t land too far on either the round or the square side. Rather, it’s got just the right amount of curvature. This is a tire that screams supportive side knobs, in case you couldn’t tell from the photo above…On that note, there has been a slight retooling of the inboard surface of the side knobs. Now, rather than on every knob, it is every other knob that features the “jigsaw” stepped profile.

I first rode the Butcher T9 this past Fall on the front wheel of the Stumpjumper EVO Expert I was testing. For a longer term and more thorough investigation into its performance I’ve been running the tire front and rear on my personal bike in a pretty wide range of conditions this winter. With the exception of dry dusty dirt, this tire has seen it all: hardpack, loose rock, roots, mud and snow. The Butcher has always been billed as an “intermediate” tire – a one tire to rule them all, if you will. While I don’t believe that sort of thing applies to elite, high performance race scenarios, it is applicable to every day mountain bikers. Think of it like this – you’re going to Whistler and can only bring one set of tires. You bring a jack of all trades type.

Starting with duty and dimension, both the casing and overall carcass picked up some extra girth. At its weight, the Grid Trail is ideal for Trail and All Mountain. If you’re leaning more toward the Enduro end of the spectrum you’ll likely be better off with the further reinforced Grid Gravity casing. Anyhow, I appreciated that the 2.4″ actual width featured a bit more volume than the 2.3″ the last version, which measured accurately. The extra volume increased traction and took the edge off nicely in the rough. I could also see running a 2.6″ version of this up front with very pleasing results. As for how tough the casing was, I had no issue with the prior versions and also have not managed to flat with this version either – even with many a run at Silver mountain, which is rather unkind to tires in general. Overall, I think the tires are quite tough and resistant to all kinds of flatting, particularly given their respectably weight. 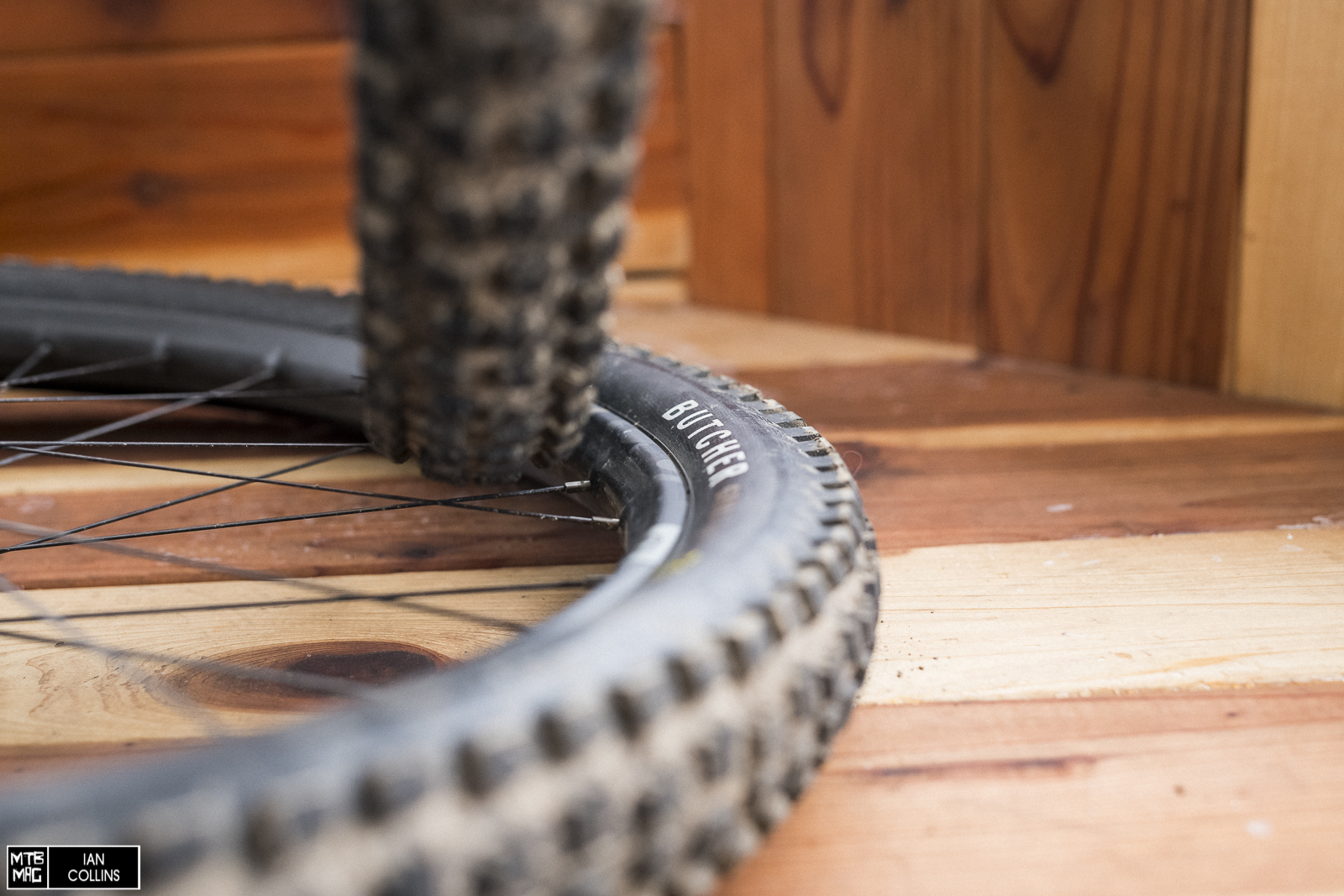 Getting into the meat of it, the big story here is the new T9 rubber compound. I have to say it is an absolutely massive improvement and I wouldn’t change a thing about the compounds properties. The new rubber strikes that perfect balance of providing the right amount of flex without pinging back and making the tires feel nervous – which was the problem with the last compound formulation. I wrongly assumed that this improvement might come at the expense of premature degradation, but thus far they’ve worn very very well and the wear they have shown has been even and at a slower rate than I expected. Wet roots, rocks, hardpack and even snow were all managed with loads of surface grip. T9 is the real deal.

On the whole I found the tread pattern to be highly versatile. The tires are fairly fast rolling, thanks in one part because of the ever so slightly low knob height and another due to the ramped leading edges on every other row of center knobs. Braking was excellent in straightaways and while leaning regardless of speed or conditions – to a certain limit anyway. The corner support is as good as it gets for a tire that rolls as efficiently as the Butcher does. If I was to have to pick an area that the tire could stand to improve slightly, I would say it would be deep, loose loam and mud. It’s not that it isn’t good, but compared to another wildly popular tire like the Schwalbe Magic Mary, it doesn’t quite bite through the soft stuff as much. On the other hand it rolls a bit faster than a Magic Mary. Tradeoffs.

For the last couple of years I thought the Butcher was a great tire in terms of its casing toughness and its tread pattern, but constantly mentioned that the compound could stand to improve whenever chatting with my contacts at Specialized. Well, I can happily report that all three aspects are now bang on. The T9 compound is up there with the best on offer from Schwalbe, Maxxis, or Michelin – which really says something. So, in closing, the Butcher is an amazing all around tire that doesn’t really compromise in any particular area and shines in most everything. The strength to weight of the casing is quite impressive and I found the 2.4″ version’s volume and width to be just right for most intents and purposes. The best part? The $60 price tag beats out everything else on the market handily, when it comes to value. 10/10 would recommend.