I used to be pretty dead set on riding thinner grips for roughly, no pun intended, the first 20 years I spent on mountain bikes. About a year ago, I was radicalized – the Sensus Meaty Paws turned me into a fan of fat, wide grips. After a small acclimation period, I can still eventually manage to get reacquainted with regular grips now and again. Anyhow, when a contact at Specialized asked if I wanted to review their new “Trail” grips, I quickly opted for the thicker of the two options. This was one of those times where I had to acclimate, but I can’t really complain – here’s how they worked out … 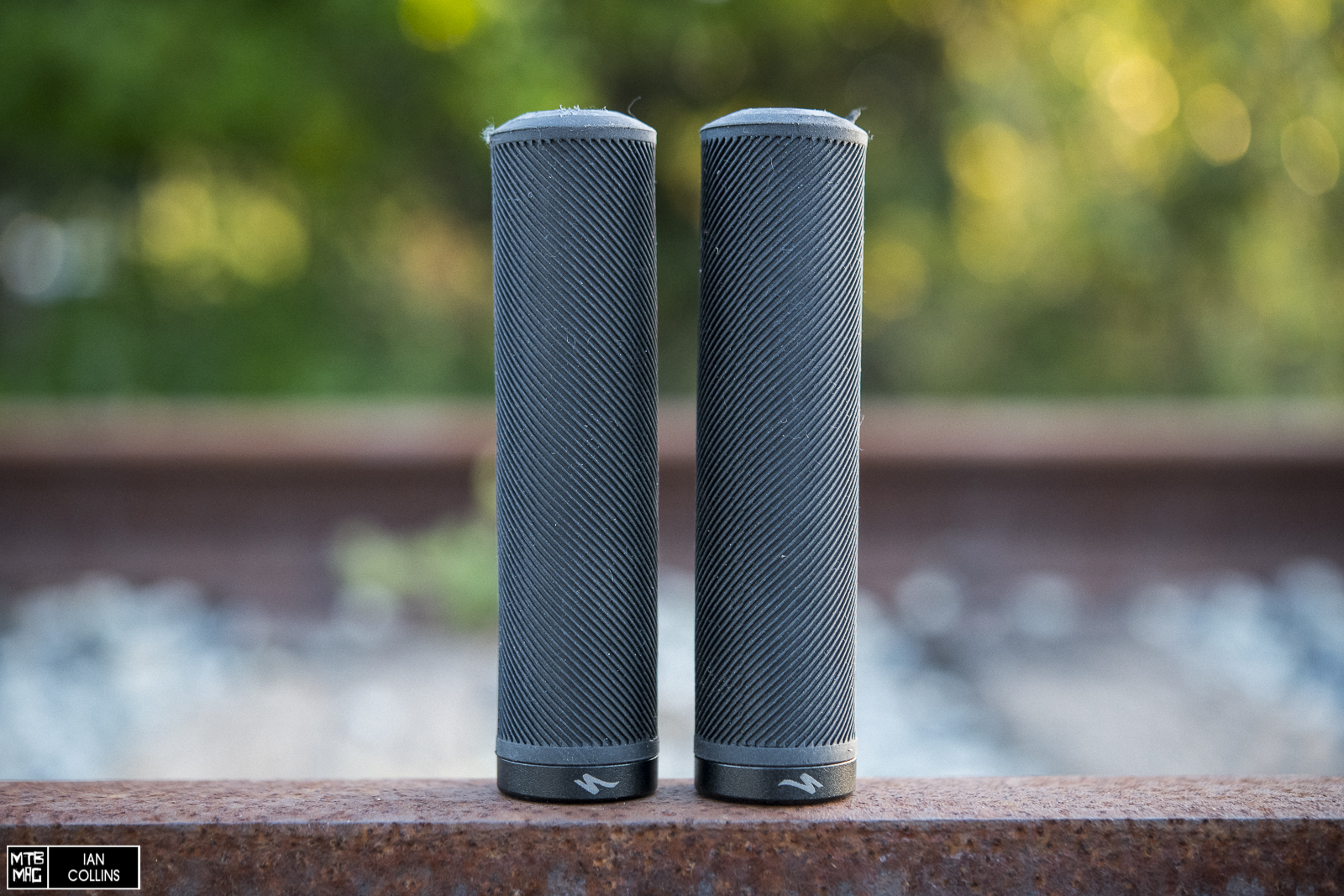 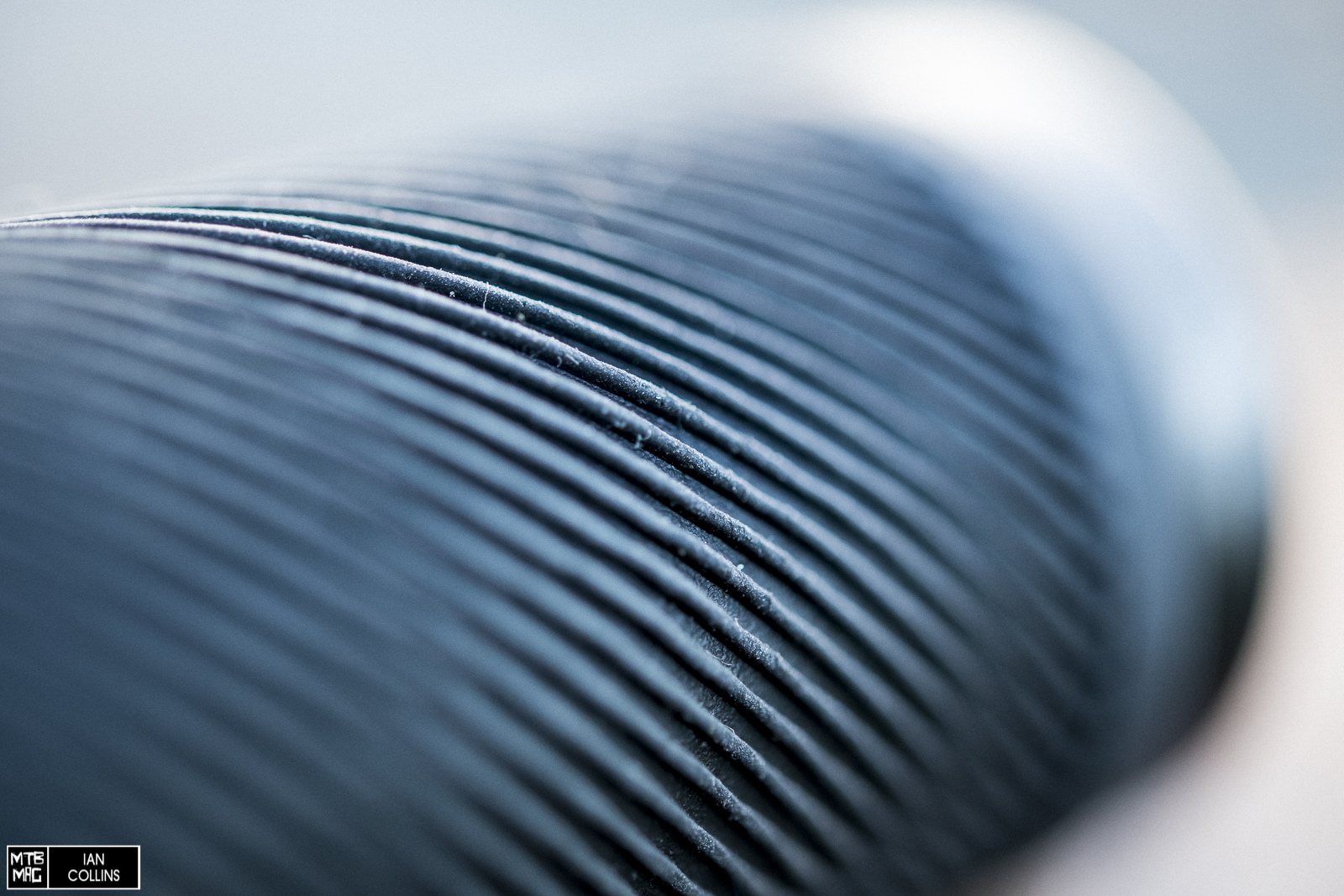 The ridges on the Trail grips have an average amount of “crush” – which is how much they collapse and squish down under the weight of your hands. I’d rate them as just slightly firmer than a Sensus Swayze, for the sake of reference. The ridges are a hair wider and shallower than Sensus grips and their diagonal direction was nice as it didn’t really make them feel like they wanted to let your hands slip in one direction, or another. 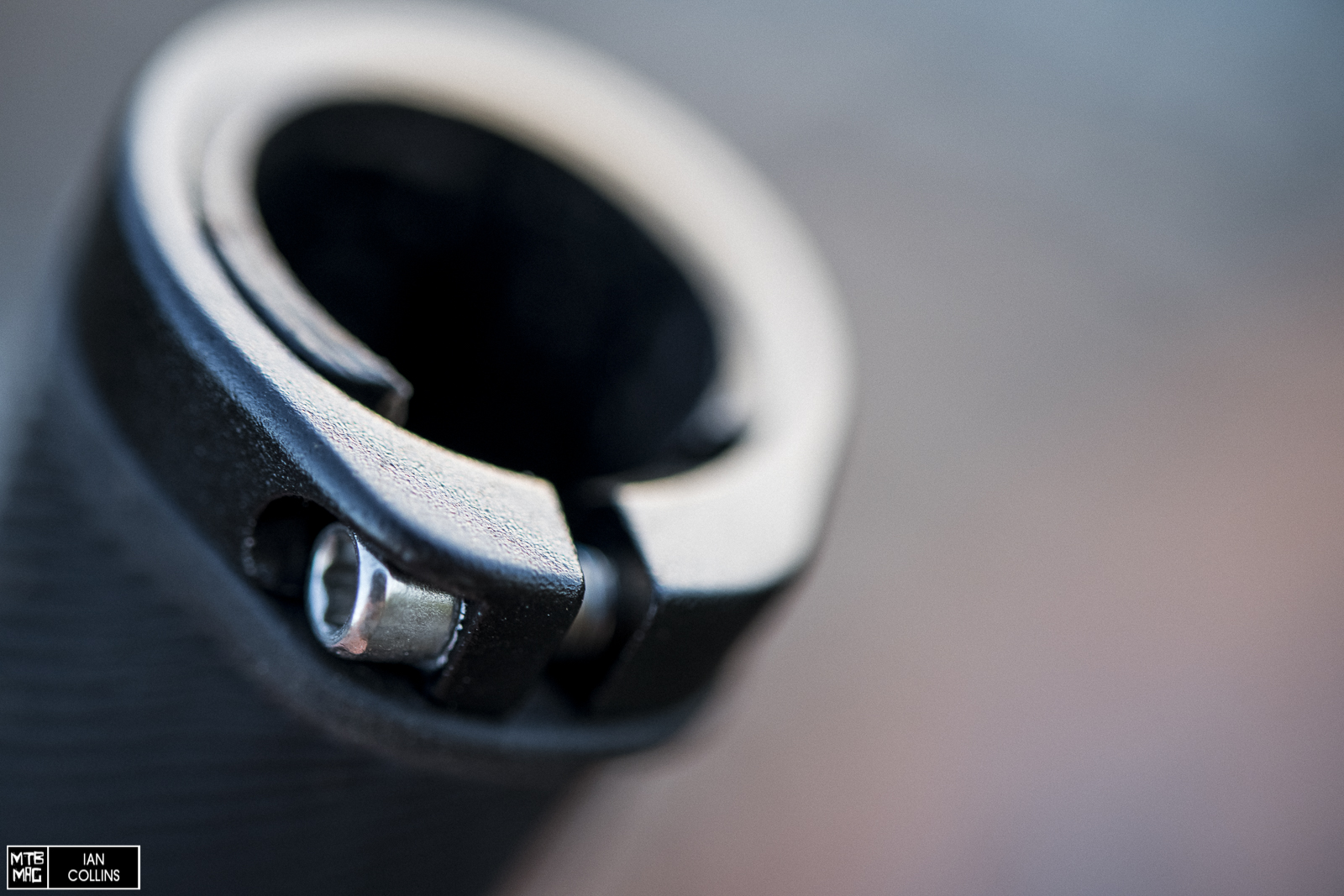 These days, if you are a manufacturer and your grips don’t use a single clamp with a 3mm allen key for hardware, you need to do some serious self-examination. That setup means easy on/off, no slippage and no metal under the butt of your palm due to a secondary clamp. 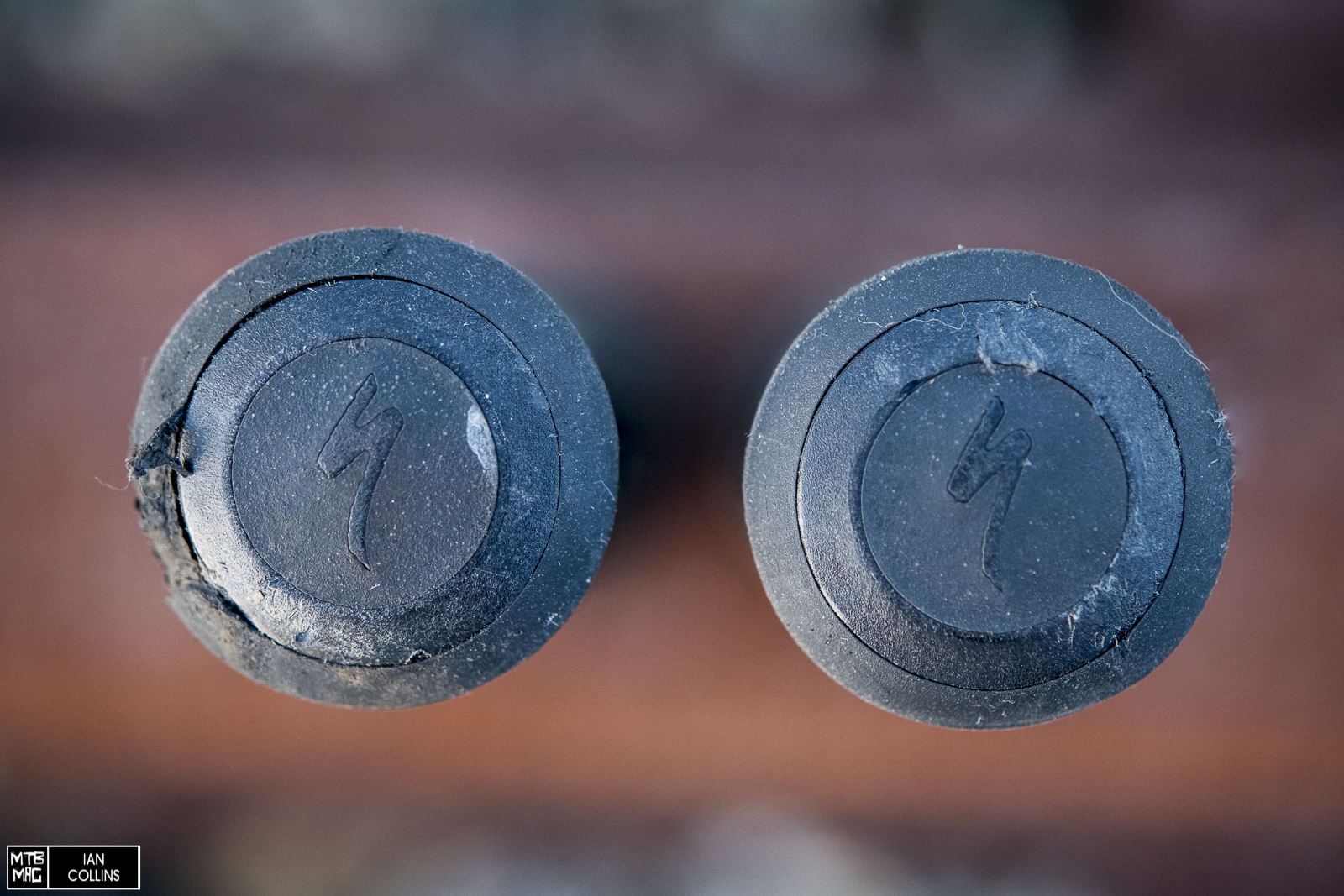 Pictured above are the plastic end caps that are part of the sleeve that rubber grip sits on. They were quite tough and dense and managed to shake off quite a few crashes and scuffs – many of which were after this photo was taken. 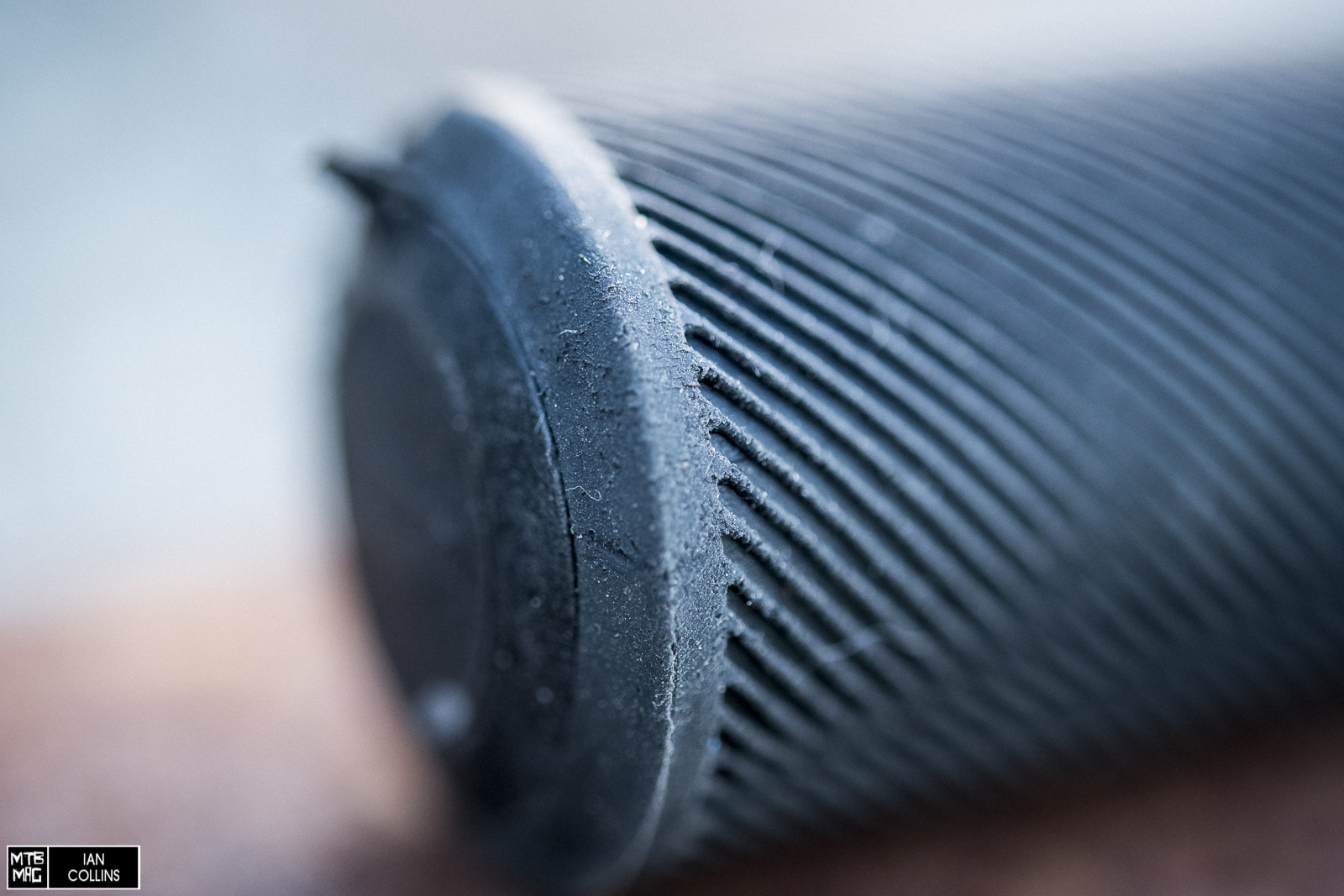 One of the things I liked best about the end of the grips, or even the grip itself for that matter, was the beveled edge out at the end cap. More on that shortly…

At 32mm thick, these are just a couple millimeters shy of the Meaty Paws that I’m now used to, which are 34.3mm. You might be thinking that 2mm is hardly anything, but it feels like quite a lot on a grip. In any case, compared to most grips, these are a little bit on the thicker side – the Trail grips are also available in a smaller 30mm diameter for, what it’s worth. With that in mind, they’re not super squishy like an ultra tacky Renthal, nor are they super firm like an Ergon. Rather, they sit very comfortably in the middle. On trail, bare handed or gloved, I found them to be just grabby enough, but not gushy. Bare handed without gloves they were a little on the slick side, but to date the only grips I’ve found that are up to that task are Renthal’s ultra tacky push-on.  As far as taking the edge off, I found them to be a little on the firm side for a thicker grip, but after a dozen rides or so they broke in and softened up substantially, as many grips do. 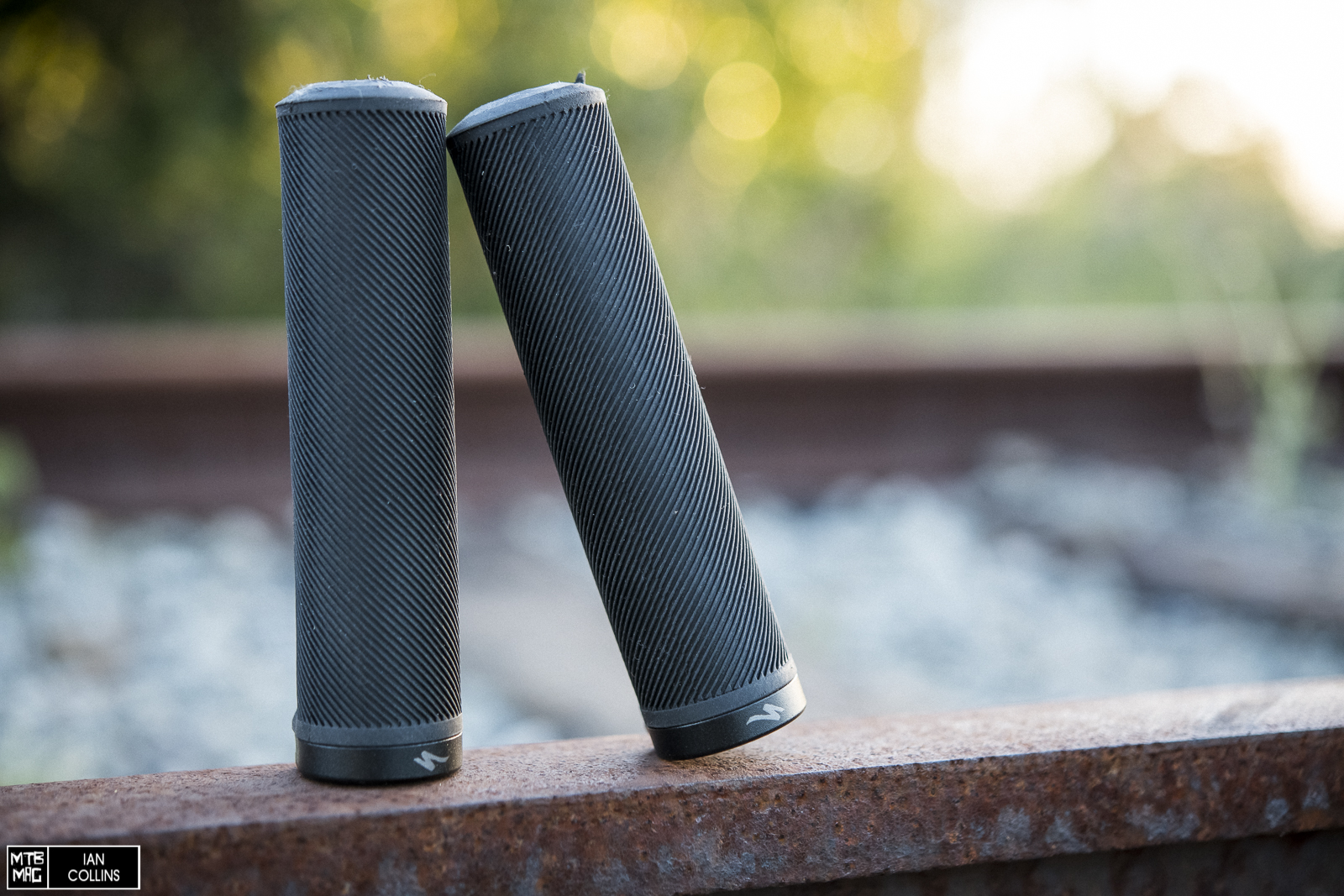 One facet I personally liked about the Trail grips was that they did not feature a distinct ramp at the butt of the grip. I have a tendency to ride with my hands way out at the edge, sometimes hanging off slightly. At 134mm, these fall into an average width that most of us are used to. The bevel on the end cap was a bonus for two reasons – first, there was less of a hard edge to catch and snag on tight pinches when you graze a tree or a sapling. Second, since the harder plastic was protruding furthest from the end and had a rounded off shape, it took the brunt of the impacts. So while the rubber at the end of the grip did get a little banged up here and there, it wasn’t as bad as some offerings I’ve used since it didn’t protrude as far. Smart…

At the end of the day, I’m typically not that easily won over by grips that can be lumped into the OEM category, coming in house from big brands. Turns out the Specialized trail grips are pretty darn good though. They are sleek and minimalist, low profile and clean, with smart hardware. The fact that they come in two sizes should cover a wide user base as well. All in all, there’s little to complain about and they’re very much worth a look.