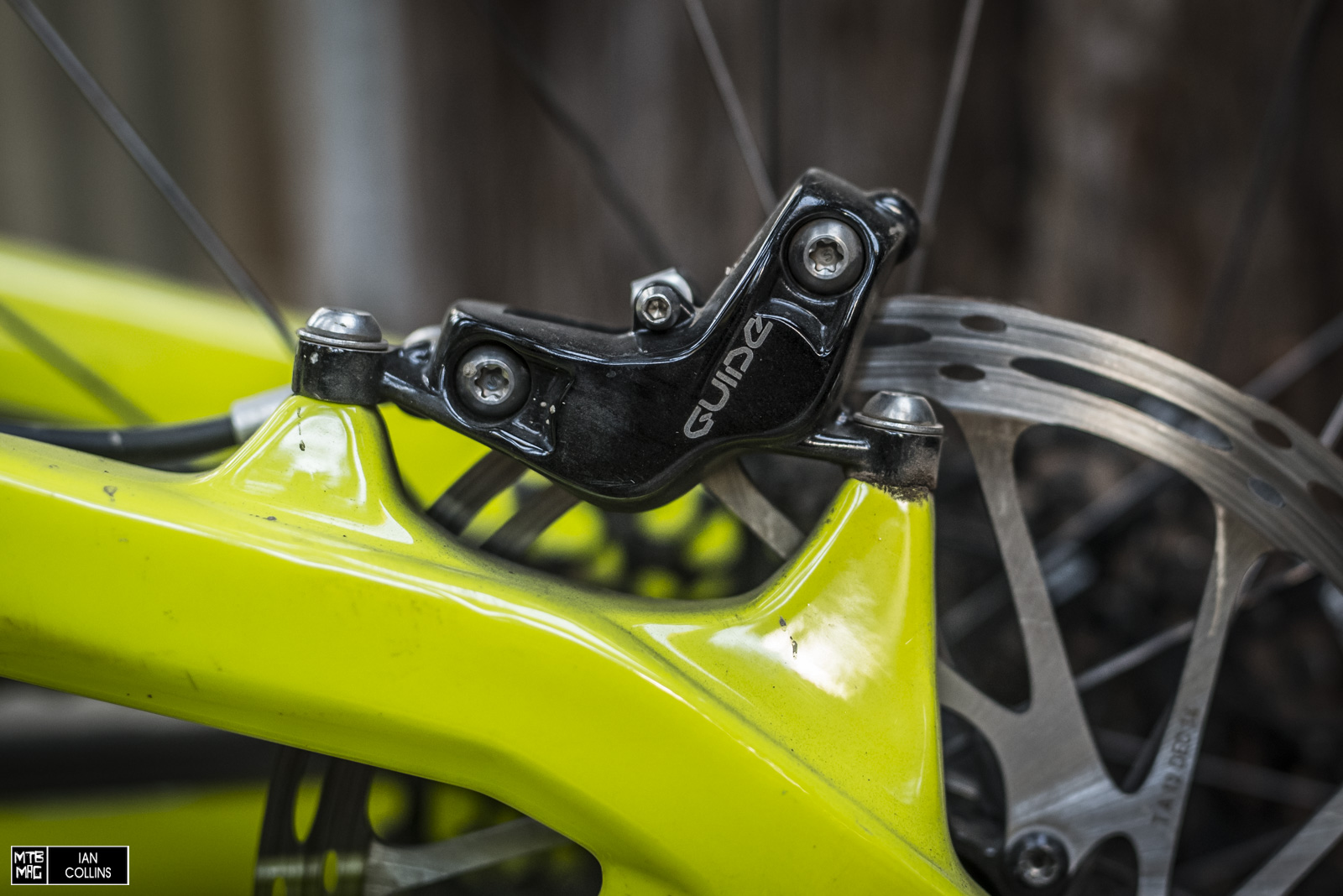 [ad3]
Shortly after the SRAM Guide brake lineup first hit the market, they quickly became and instant favorite. With excellent modulation and feel, tons of power, and consistently foolproof bleeds it became widely regarded as the best brake that SRAM had ever made. Not the type of company to rest on their laurels, SRAM quickly started developing an ultra high end follow up : the Guide Ultimate. How did they improve upon an already near flawless design? Well – it’s the little things, and we’ll highlight them below. 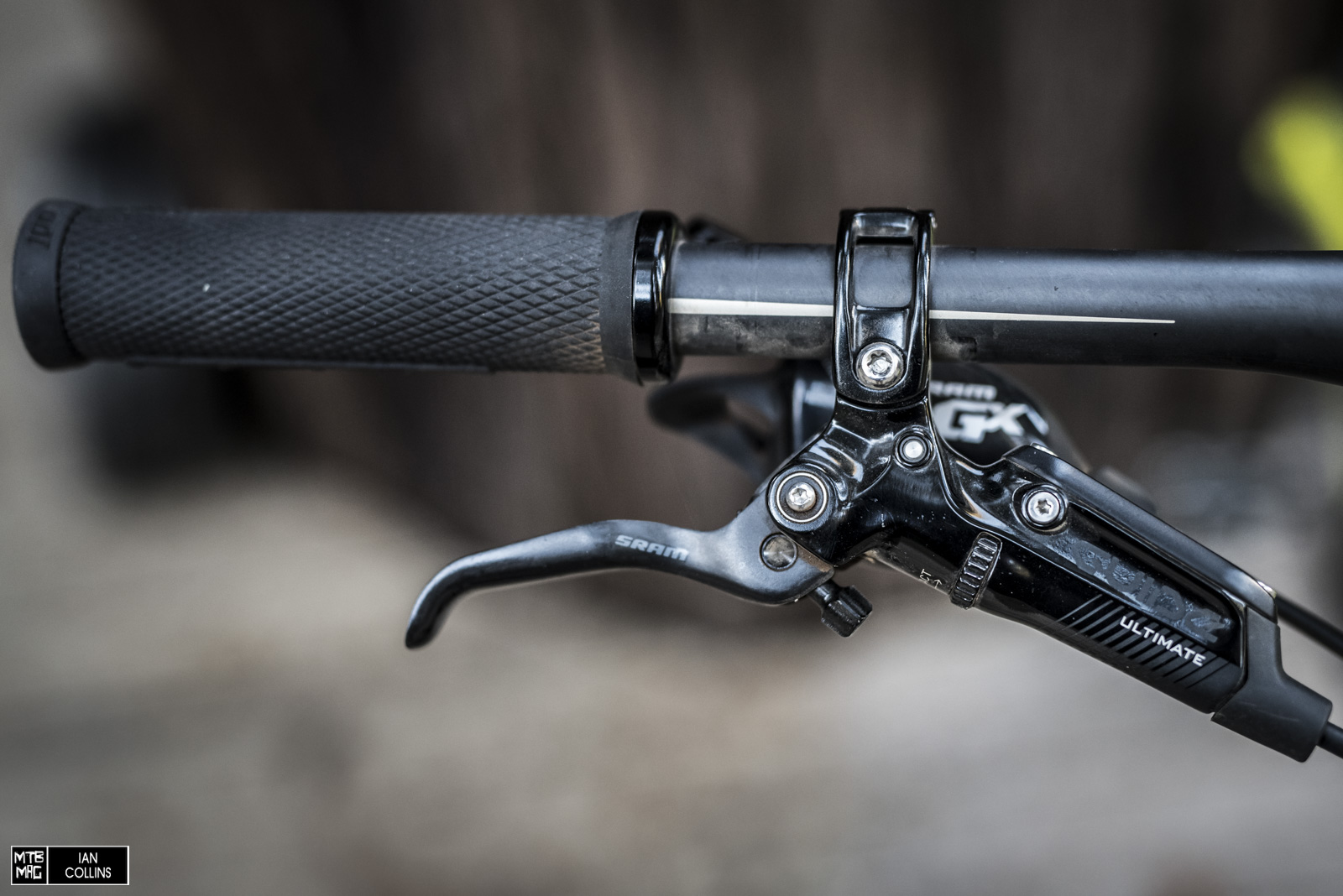 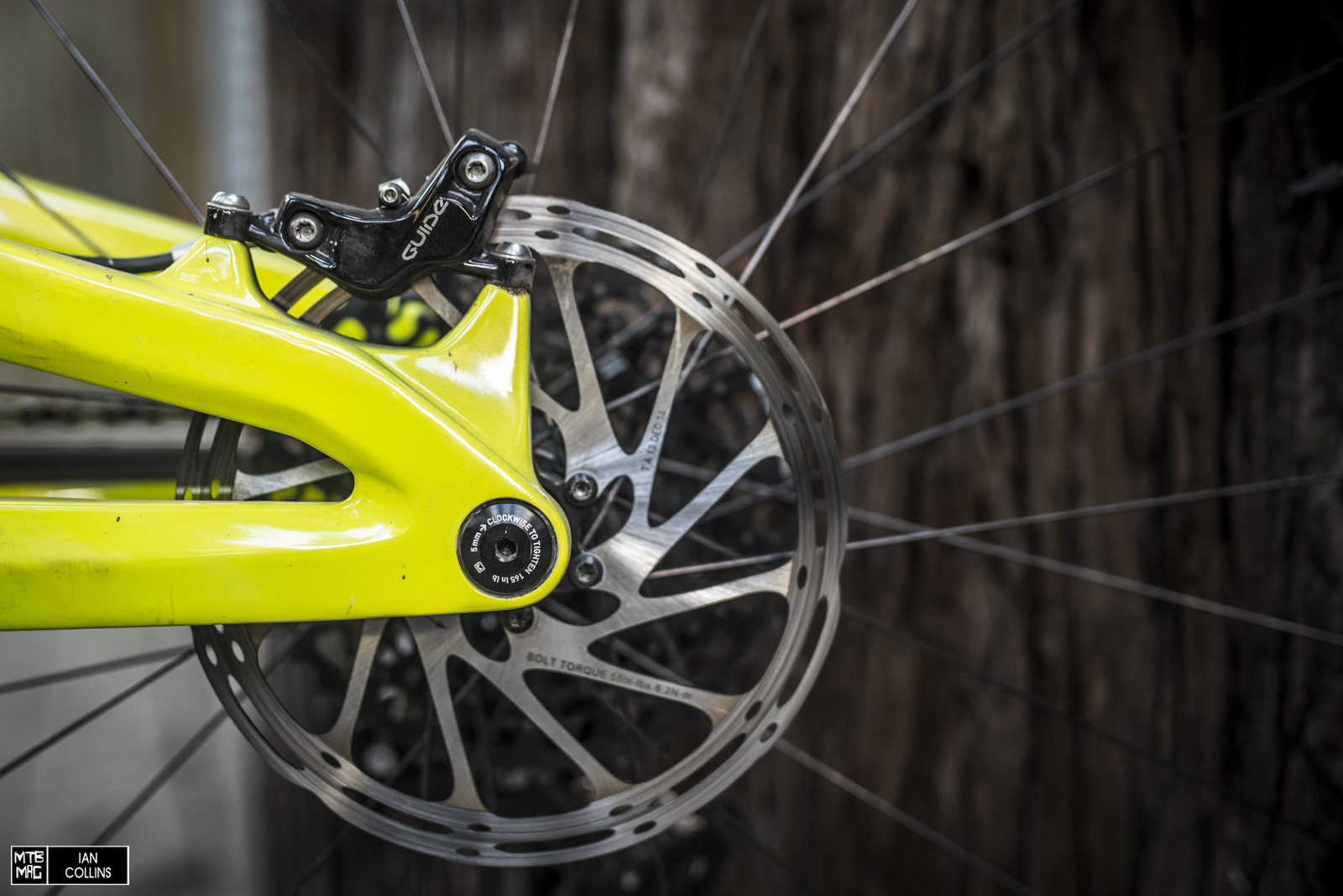 Upon first inspection, the Ultimates don’t look all that much different than a Guide, R, RS or RSC. Once you start looking at it under a microscope the subtle differences become apparent – some externally visible, some not. Where do we begin? Aside from the addition of titanium hardware and a carbon lever blade, the lever remains the same so let’s start with the caliper.  That’s where SRAM has made great strides in managing the temperature in extreme circumstances. 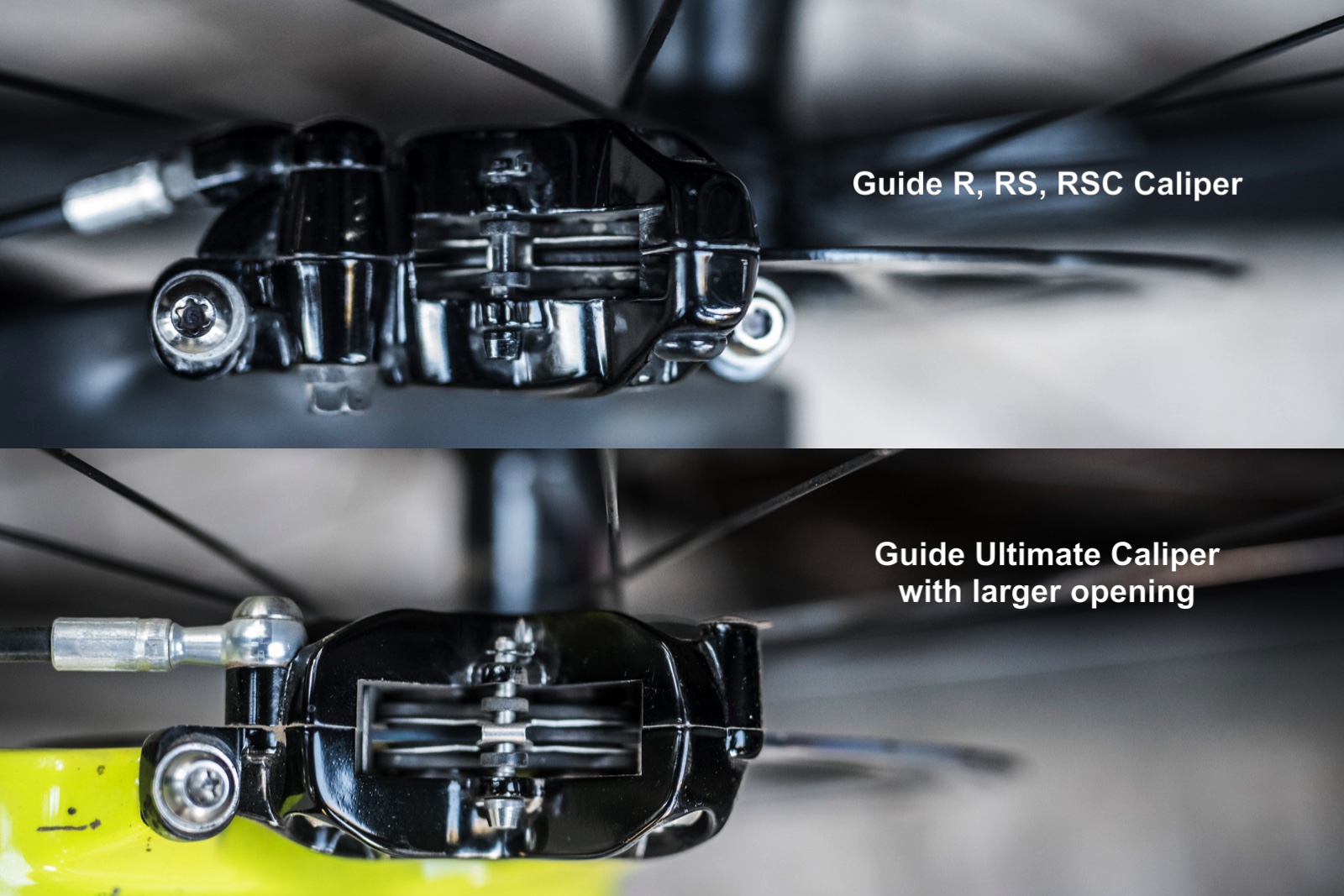 When you look side by side, the differences between calipers become more apparent.

The most notable change is the opening where you install/remove the brake pads. The S4 caliper receives a much larger opening to allow for better airflow and cooling. It should be noted that the Guide Ultimates use the same brake pads as all other Guides, which happen to be the same as the XO Trail brakes that were oh so popular for quite some time. The bottom line is that it’s no fuss and easy to find pads. 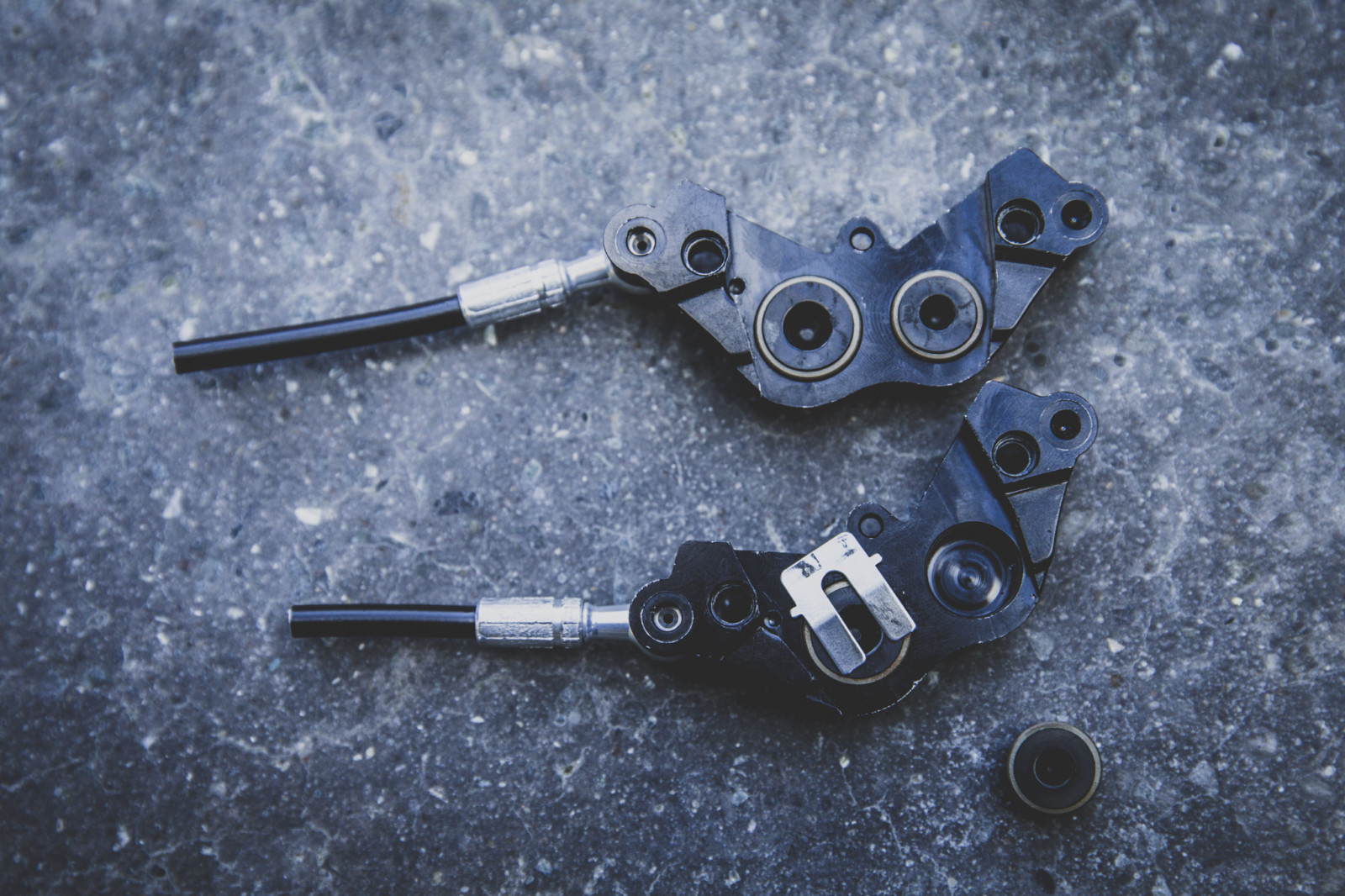 The next major addition is “Heat Shield” – a patent pending and simple but brilliant technology that SRAM have engineered that interrupts/blocks the heat that builds up on the pads and prevents it from increasing the brake fluid temperatures. 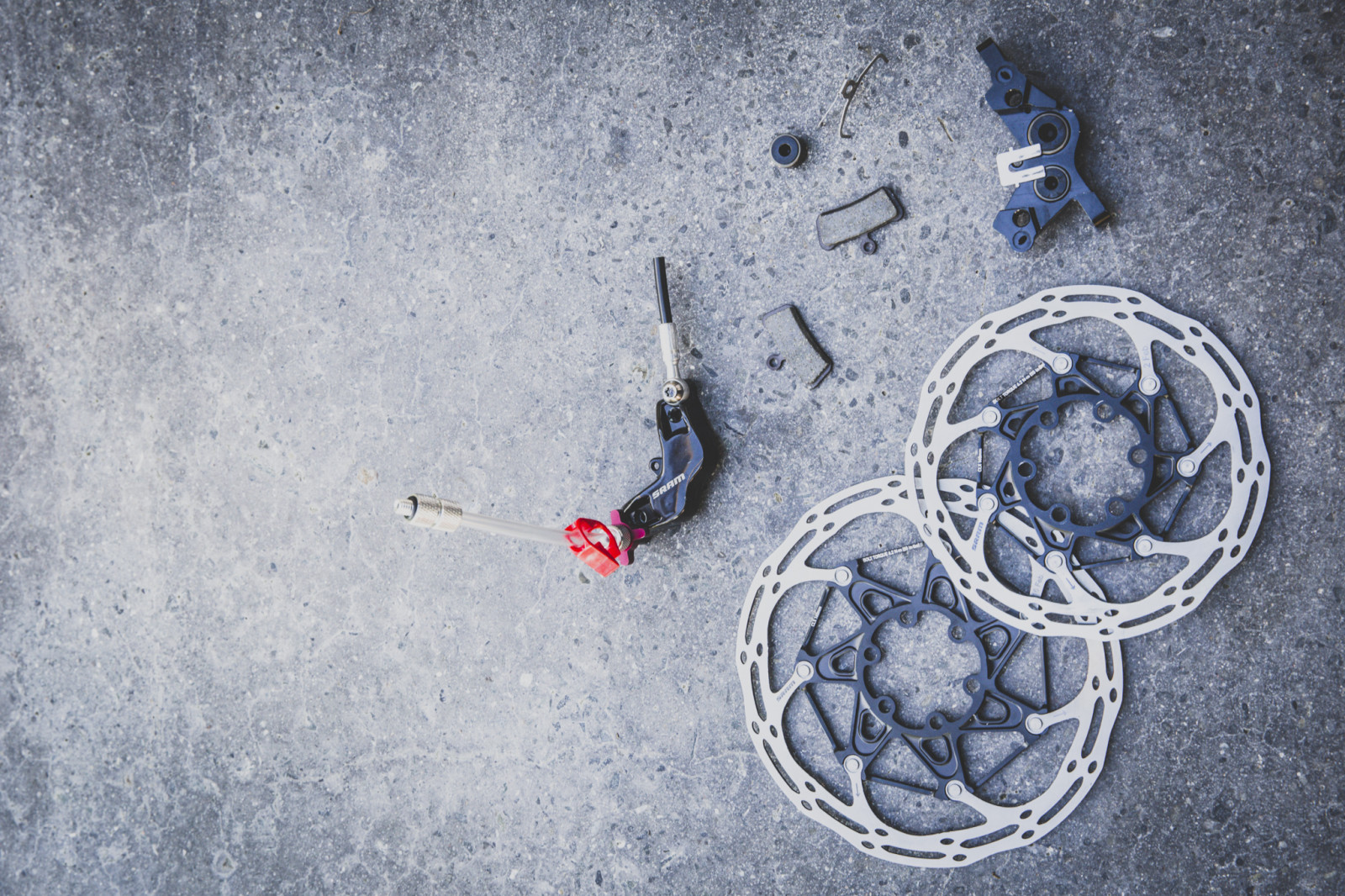 An exploded view with a focus on some of the updates. Photo : Adrian Marcoux.

Pictured here are the new Centerline X rotors – they feature an aluminum spider as part of their two piece design, bringing a nominal weight savings of around 15 grams per rotor. Also as you can see in the above photo, there is a new syringe shown. With the Guide Ultimate, SRAM introduced “Bleeding Edge” technology. Basically, you no longer need a torx grub screw to access the the bleed port in the caliper. Continued below… 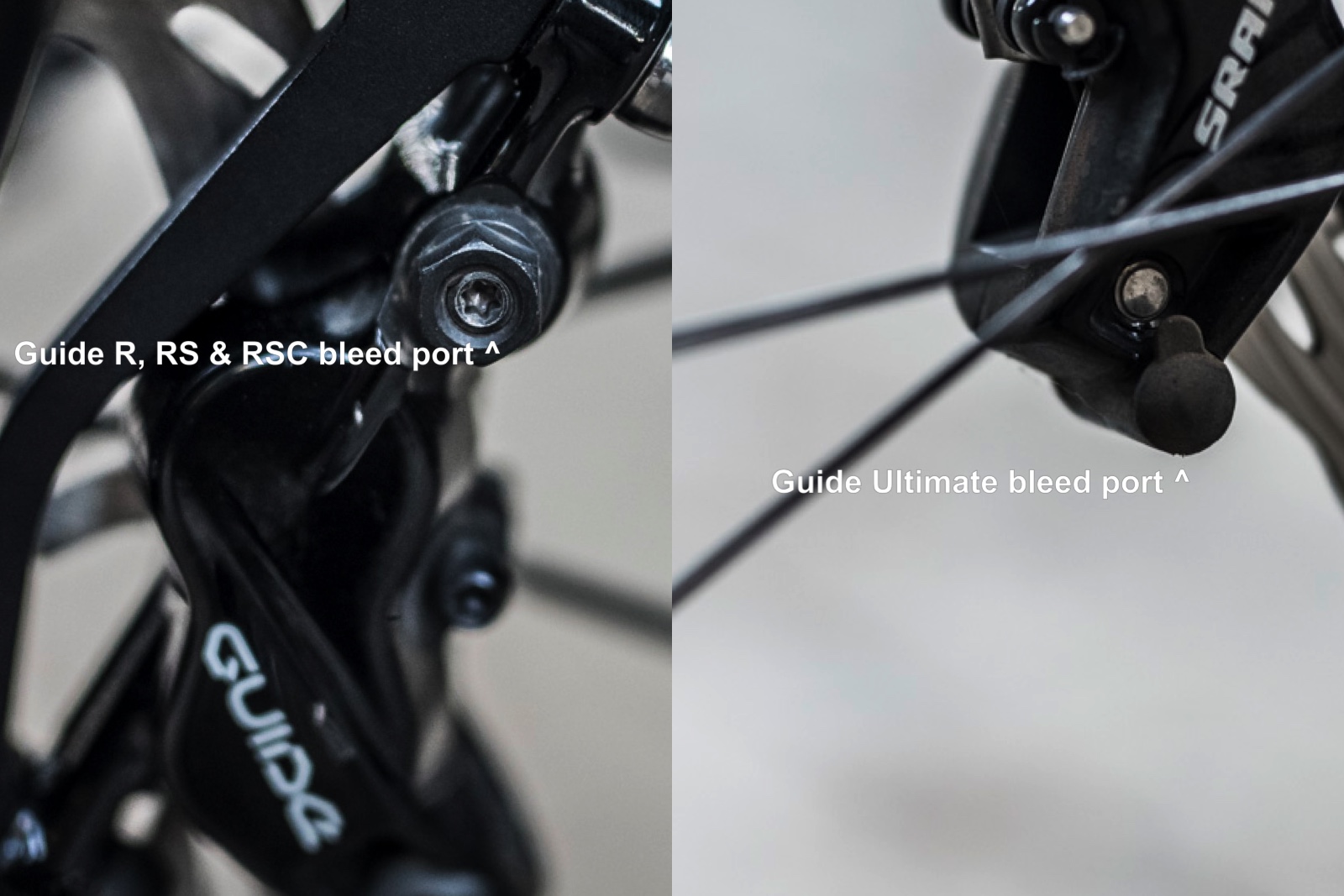 Side by side comparison of the bleed ports.

As you can see, the bleed port now sits at the back of the caliper, improving flow and bettering the chances of forcing air out during the bleed process. As mentioned, the grub screw has been replaced and the new included syringe features a tool-free connection interface that simply snaps in and out. Lastly, the bleed port sits inboard on the bike as opposed to outboard – that’s a minor detail though. 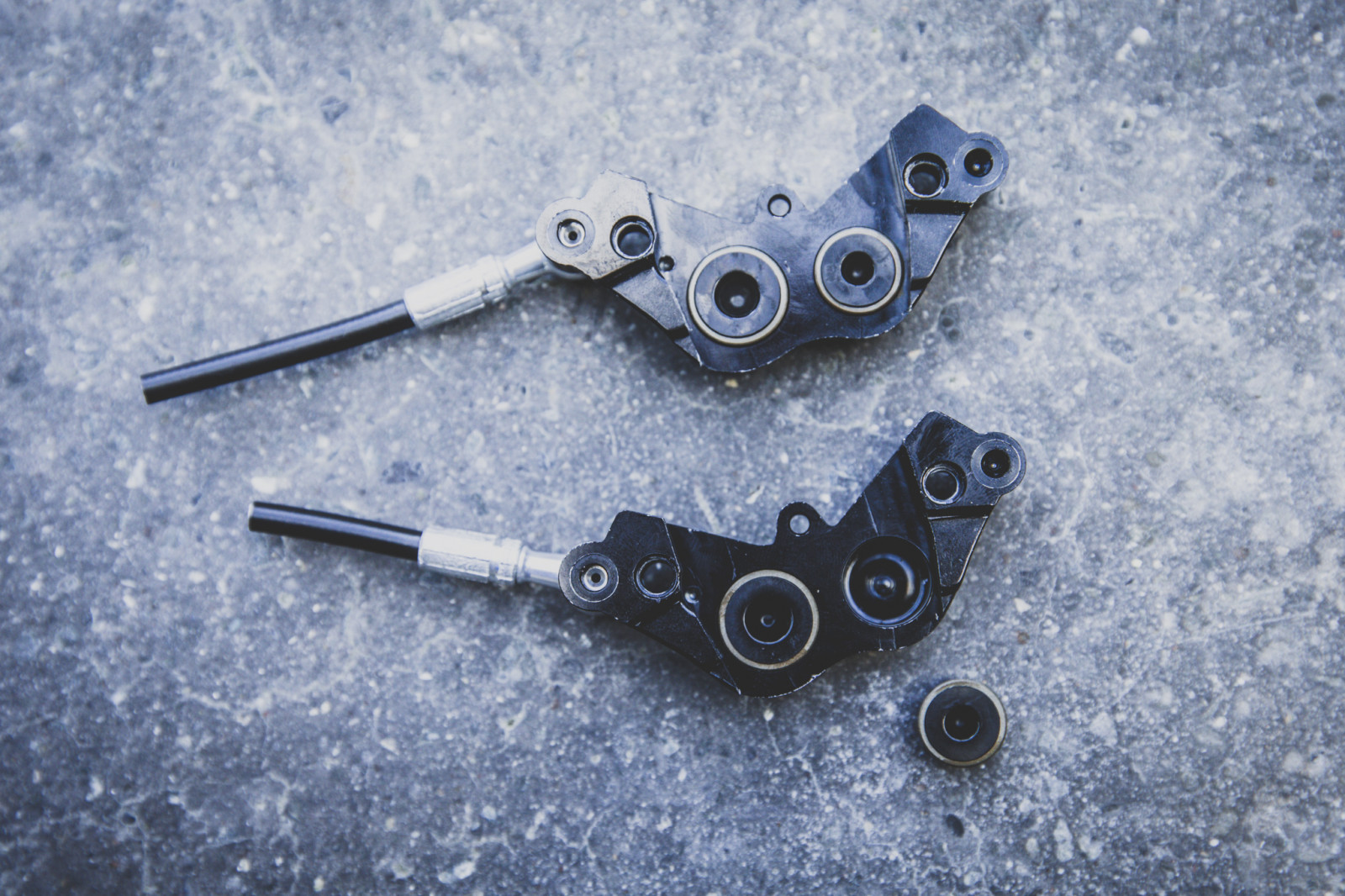 An exploded view of the new pistons installed in the caliper.

Guide Ultimate features redesigned pistons as well. In an effort to improve how smoothly the pistons & pads retract, they use moly coated aluminum for a more precise and smoother interface.  Mating said pistons to an improved set of seals helps the overall feel. The pad interface is comprised of the same phenolic plastic material that makes up the entire piston on Guide R, RS & RSC. 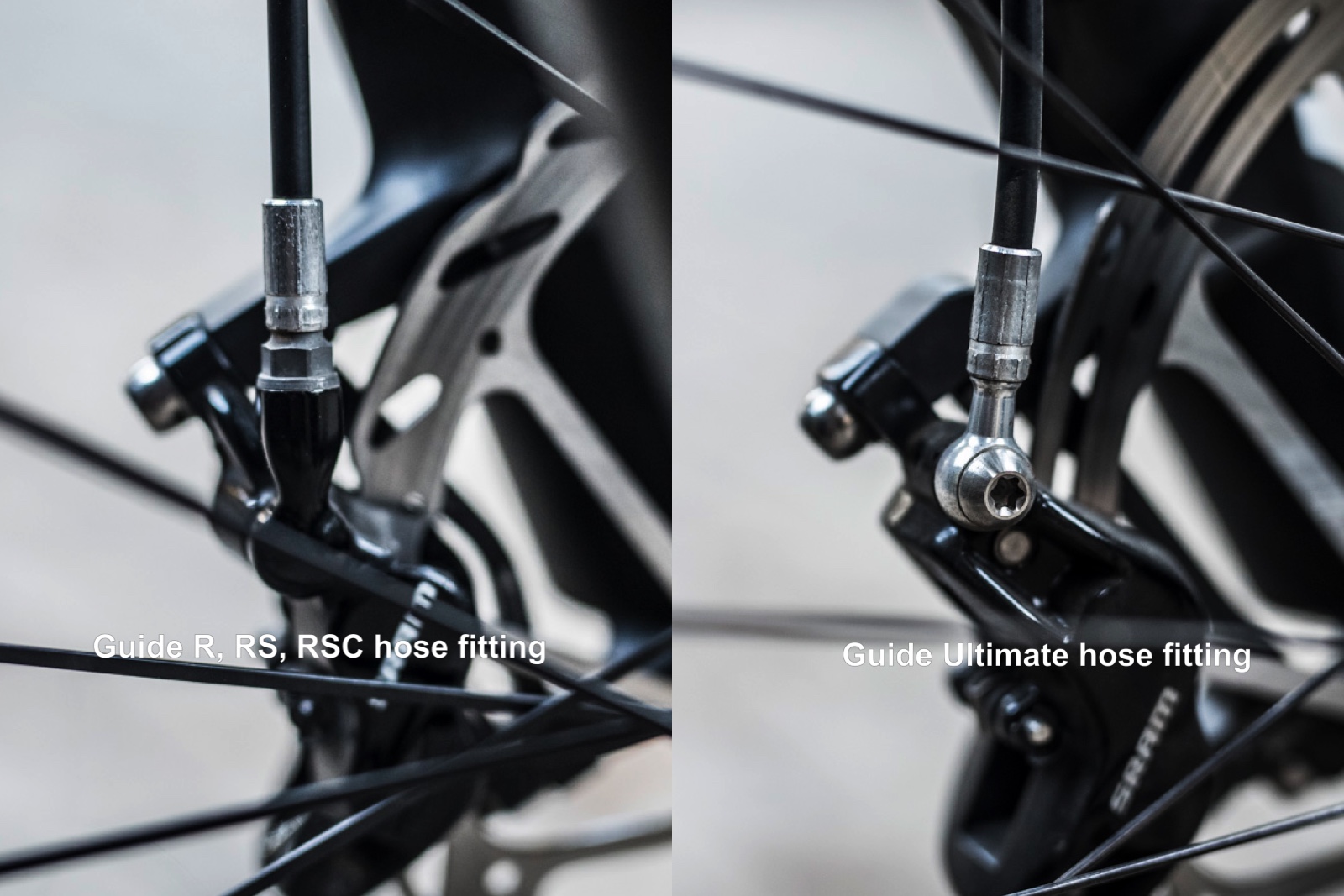 A side by side of the different hose fittings.

Lastly, it’s worth pointing out that the Guide Ultimate uses a new hose and caliper fitting altogether. Some months ago it was a bit hard for us to find a hose during a bike swap, but now they’re becoming more readily available at SRAM dealers worldwide. If you buy a set of Ultimates and like to keep spare parts around, just remember you’ll need a different spare hose if you’re upgrading from Guide R, RS or RSC.

That’s a pretty long list of seemingly minor changes all within a brake caliper. Pretty wild if you ask us, but it’s a  reminder of how hard SRAM pushes to enhance their products even once they’re already excellent. Let’s see how all of these improvements fared once we hit the dirt.

When you first get going on the new brakes they don’t really seem all that different, but they just do seem a bit more refined – given the increased price one would hope so. The carbon levers feel a bit smoother, and the weight loss is not huge but as we all know, it adds up.  Aside from that, it’s what we’ve grown to expect from the Guide family.  Light action in the levers, consistent feel and plenty of modulation and power to boot. 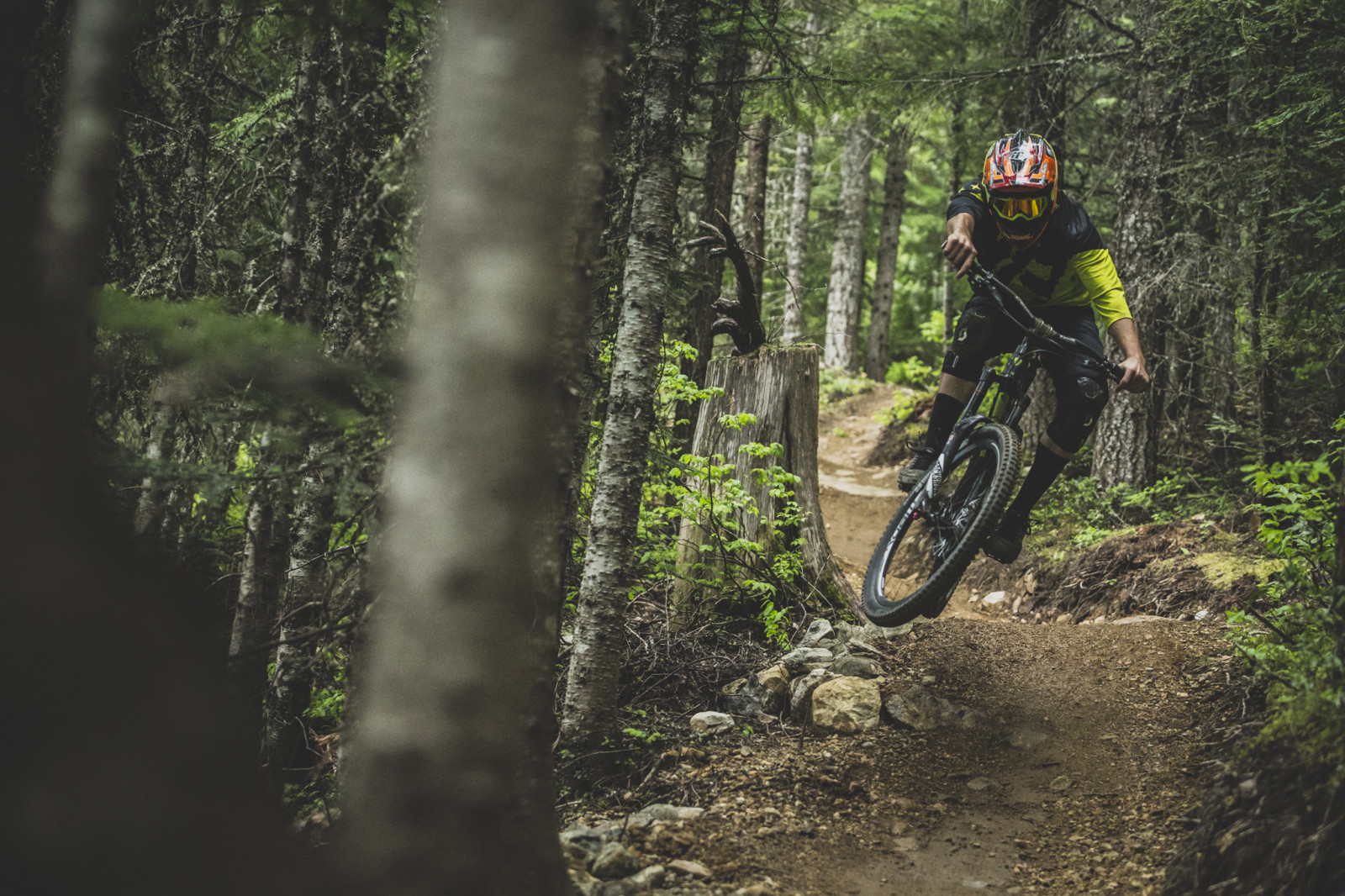 Once we started to really get into it and found some of those late brake panicky moments, we physically felt how the sum of the parts(read : refinements) translated into a noticeable amount of increased power. That’s not to say that they’re way grabbier at all times though – it’s subtle but you notice when it matters most. After you’ve been feathering the brakes on and off during a long descent and you’re almost expecting the brakes to be running hot and weakening, they really shine. The power was just always there no matter how hard we pushed them. Oddly enough, in a way they reminded us of running DH rated brakes on a trail bike, just with better control.

You might be thinking this is some sort of placebo effect and we’ve made it up in our head, but the Guide RSC has been our go-to favorite for quite some time now, so we definitely have a good basis for comparison.  Having ridden both brake sets extensively on the same bikes and the same trails in multiple locations, we know what we’re feeling.

So where does the Guide Ultimate stand? Well, it may sound corny and cliche, but it’s true to its namesake. While SRAM can be known for using a plethora of catchy names like “Heat Shield” and “Bleeding Edge” which can often come off as marketing hype, this is the real deal. We’ve felt a noticeable difference between the Ultimates and their predecessors. Are the Guide R, RS or RSC bad? No way.  They’re still amazing, cost substantially less money and pound for pound, they’re the best in their respective categories/price points.

Who are these brakes for? With carbon lever blades and titanium hardware, you should already know but we’ll spell it out. At $290 per wheel excluding rotors and adapters, they’re for the serious yet discerning rider who also happens to be the guy that counts grams and wants nothing but the best. He also obviously has money to burn. Then again, a brakeset is the helmet of the component world. If you have limited money to spend on gear and safety is a concern to you, then you buy a really nice helmet, skip the foo foo chamois, deal with the inherent ass chapping and toughen up. For our money if we were building up a new bike, we’d forgot the carbon bar or flagship Garmin and spend that money on the best brakes we could find that would inherently give us peace of mind. Those brakes would be the Guide Ultimates.