Behind the Dhsign brand is an artisan who designs and manufactures his products in the province of Vicenza. He has made himself known in recent years for the attention to detail and for his search for technological solutions that are quite different from the norm. At the end of last October he presented the new HPX stem , a very particular and innovative product that breaks the rules of the traditional stem. The new HPX stem represents the evolution of the Hugo, the first stem produced by Dhsign with this technology that I had personally tested five years ago. The improvement compared to the first version is evident, not only aesthetically: Dhsign has in fact refined and simplified some technical solutions and corrected a couple of factors such as the particularly high handlebar position and excessive weight, lowering the rise and above all halving the weight, at the point of making the HPX one of the lightest stems on the market. 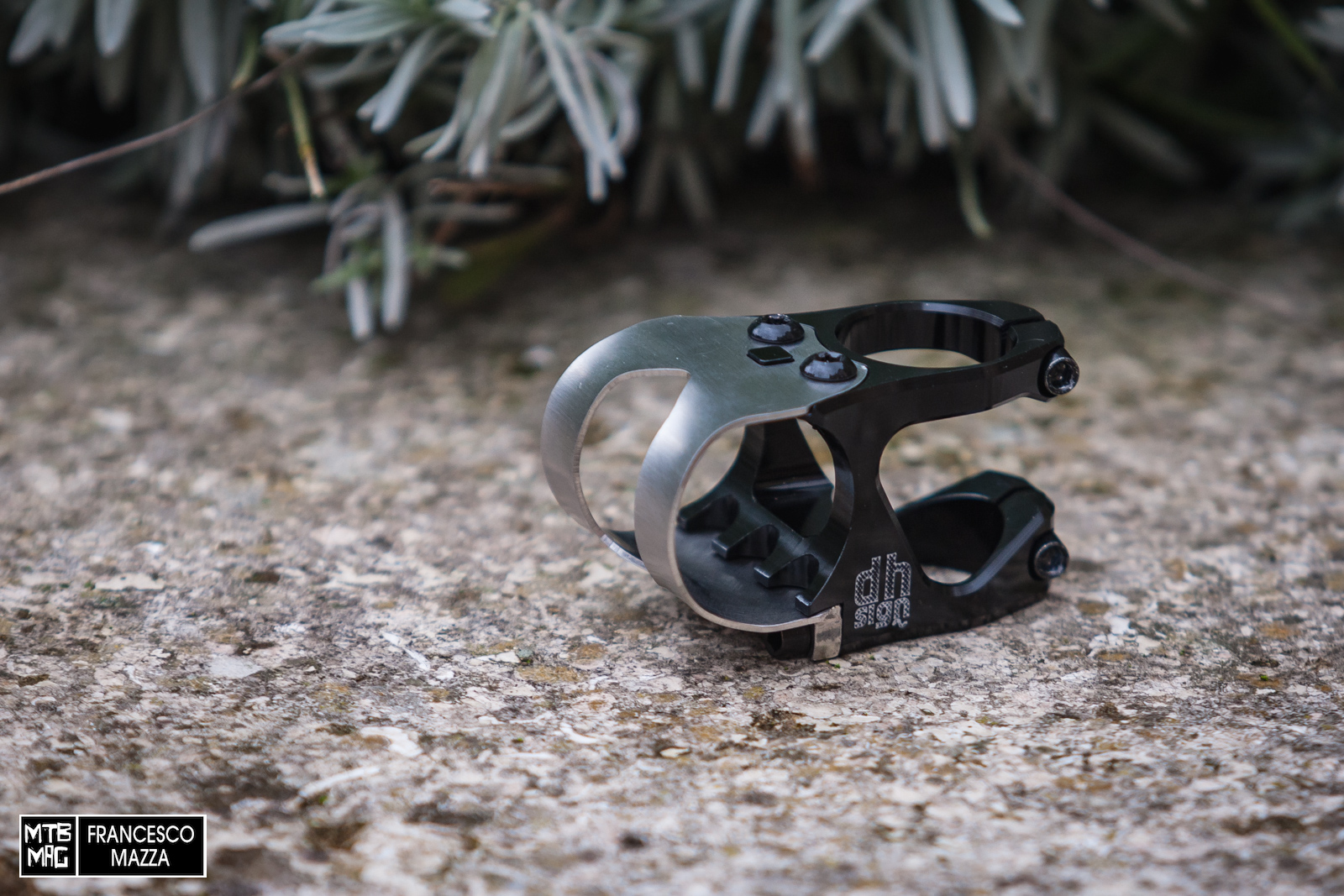 The peculiarity of the HPX lies clearly in the structure of the handlebar clamp, made with a large 1mm thick stainless steel band instead of the traditional aluminum clamp. The steel band, the material chosen for its elasticity compared to aluminum, has the function of surrounding the handlebar for more than half of its circumference, distributing pressure evenly and thus avoiding the creation of stress risers which can lead to breakage, especially in combination with carbon handlebars. The assembly procedure of the HPX is consequently different from the traditional stems but equally simple. 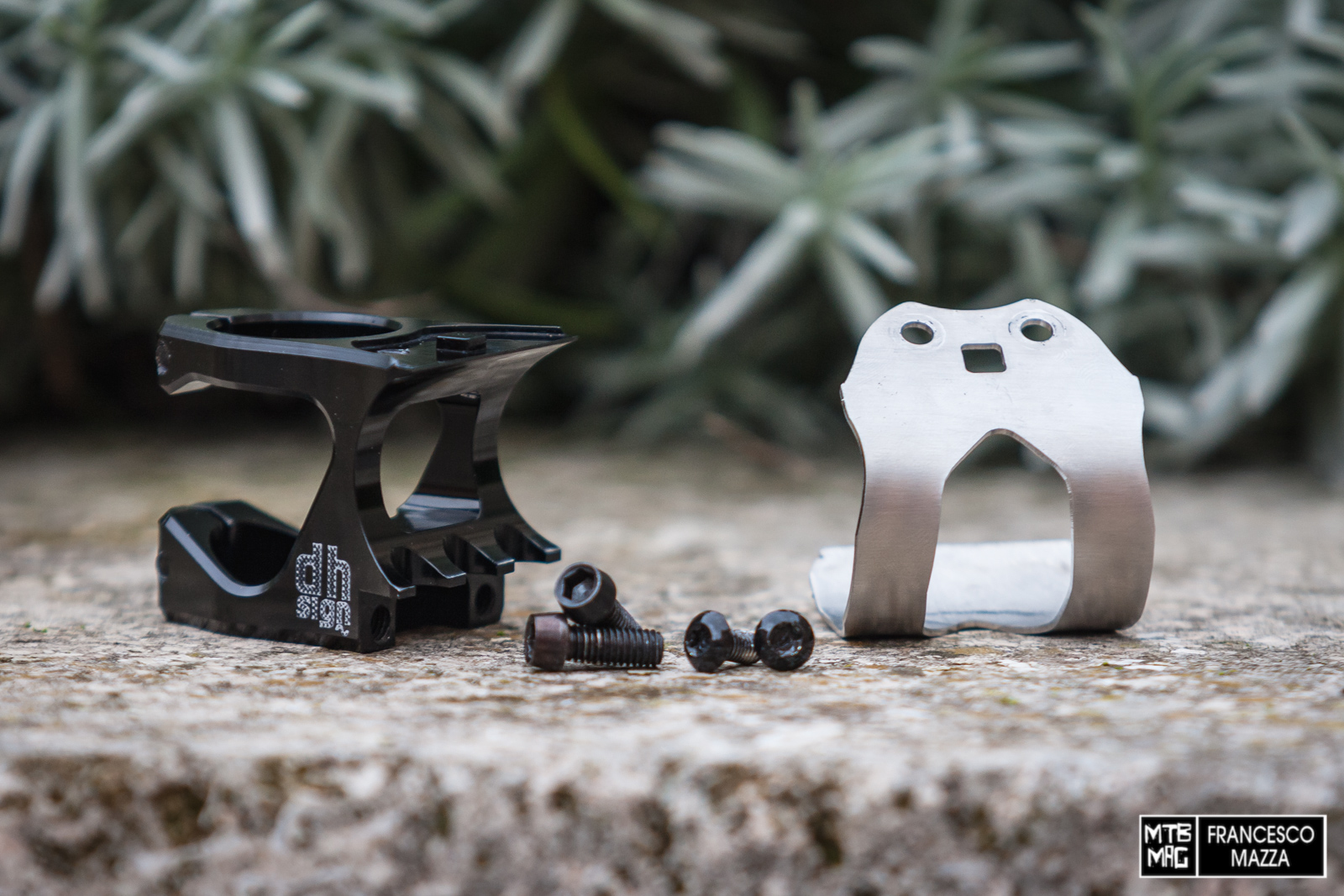 The upper part of the stem has a recessed seat that houses the corresponding part of the steel band. Here we find a small square pin, CNC machined directly from the full stem, which allows the band to fit into its seat with a “click”. This holds the handlebar in position before even screwing the band to the stem so as to allow you to work with your hands freely and precisely. 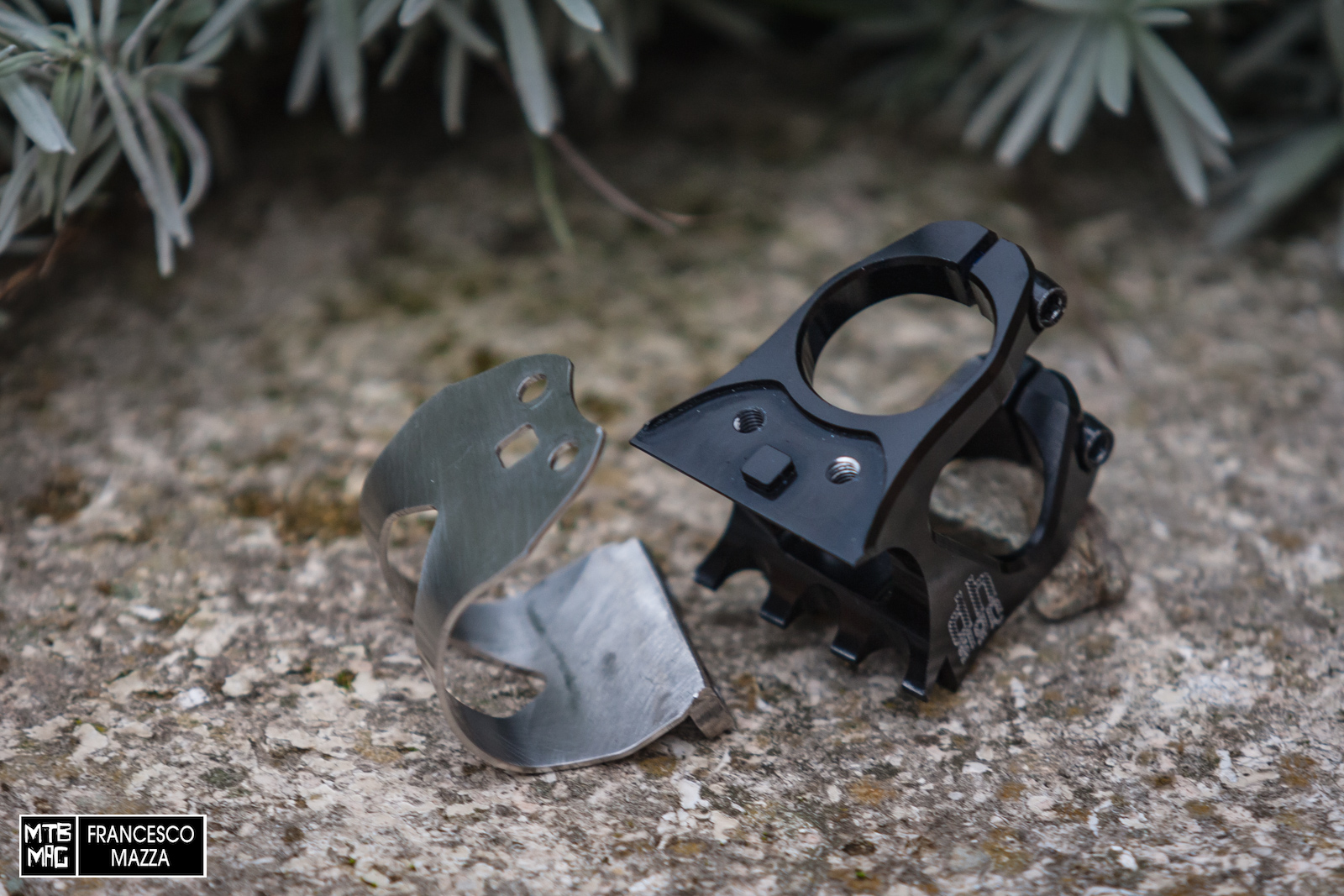 The band will then be screwed to the stem by means of two steel Torx 25 screws. Furthermore, the small square pin, locking the steel band in place, prevents the screws from cutting into the band. During the installation procedure, Dhsign recommends leaving these two screws at 1mm from the stop, so as to allow the band to be able to move until the next installation step. 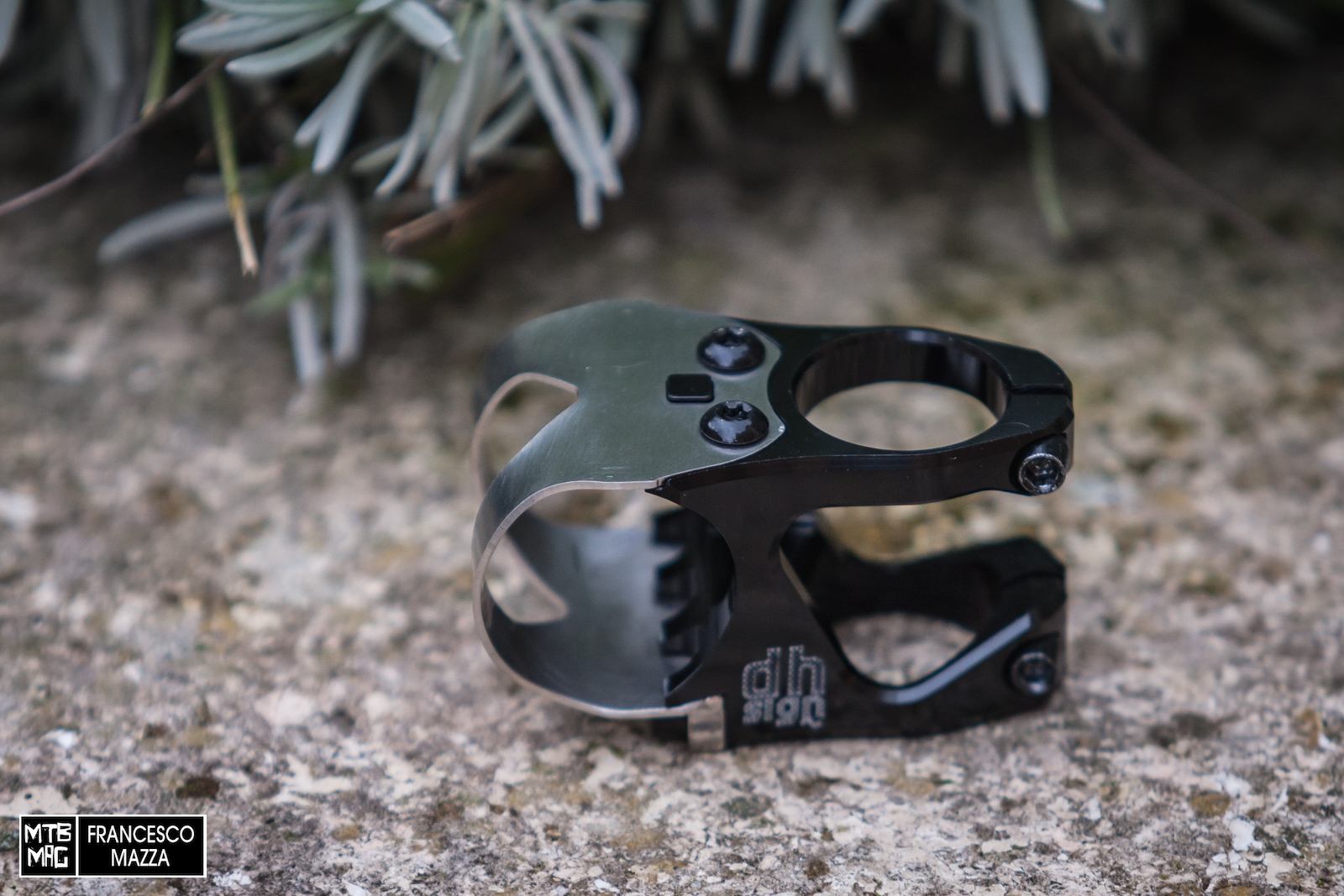 A steel block is welded to the lower part of the band and allows, through the two holes, for it to fasten the band to the lower part of the stem. This is one of the main novelties compared to the Hugo, the first version of this system, which used a larger aluminum block that was fixed in place on the band and was subsequently screwed to the stem. In fact, the current solution offers greater rigidity and solidity, while at the same time also saving weight. 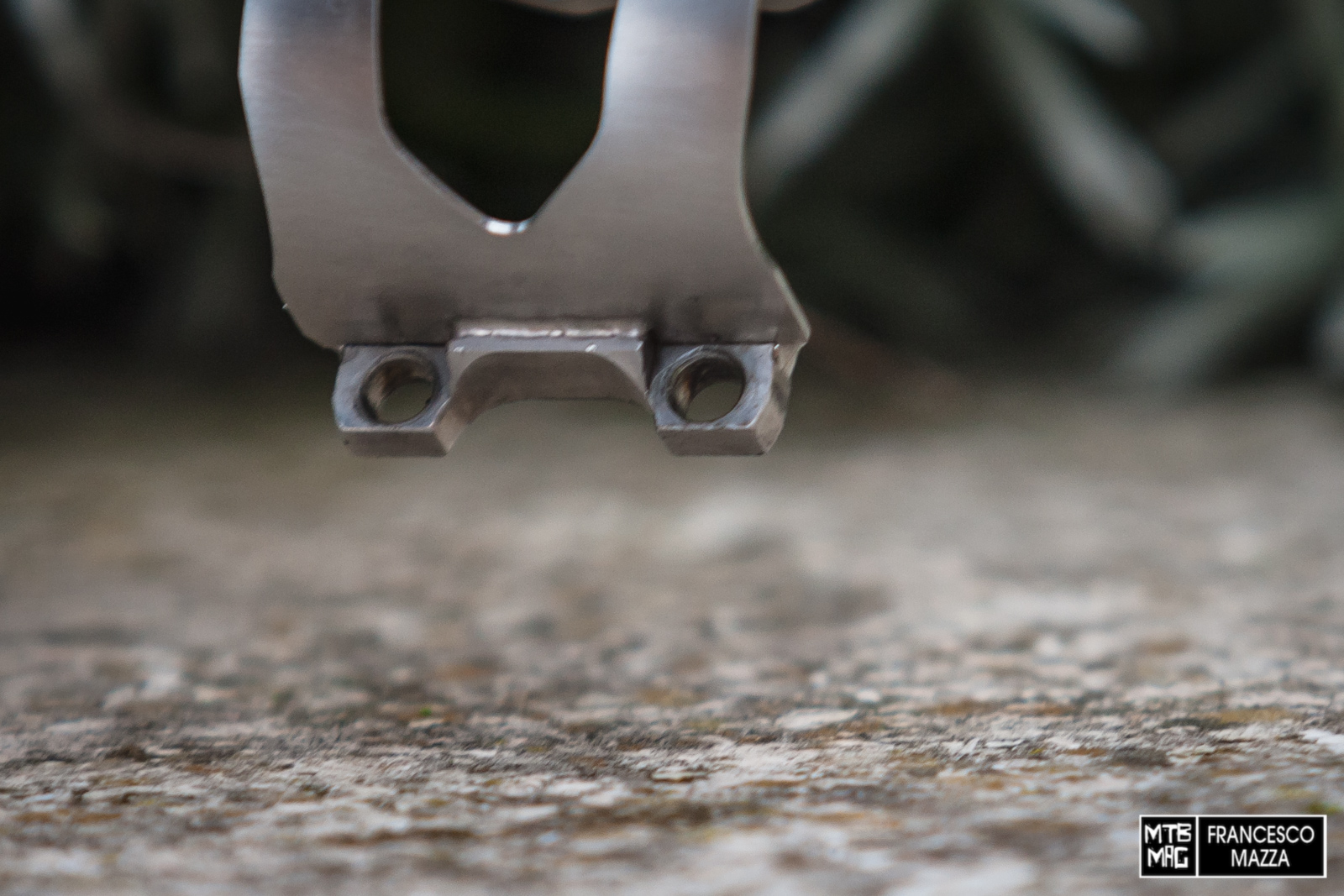 Two M6 steel screws with Allen heads are inserted in the two holes so as to tighten the steel band against the base of the stem. The new system with its welded block and the better shape of the band itself allows a more linear and precise coupling to the stem, with a significantly reduced transverse load on the screws compared to the previous model. Once the screws have been inserted, without tightening them as far as they will go, you can proceed to tighten the upper screws and then adjust the position of the handlebar. Finally, you can tighten the lower screws again and you are ready to go. 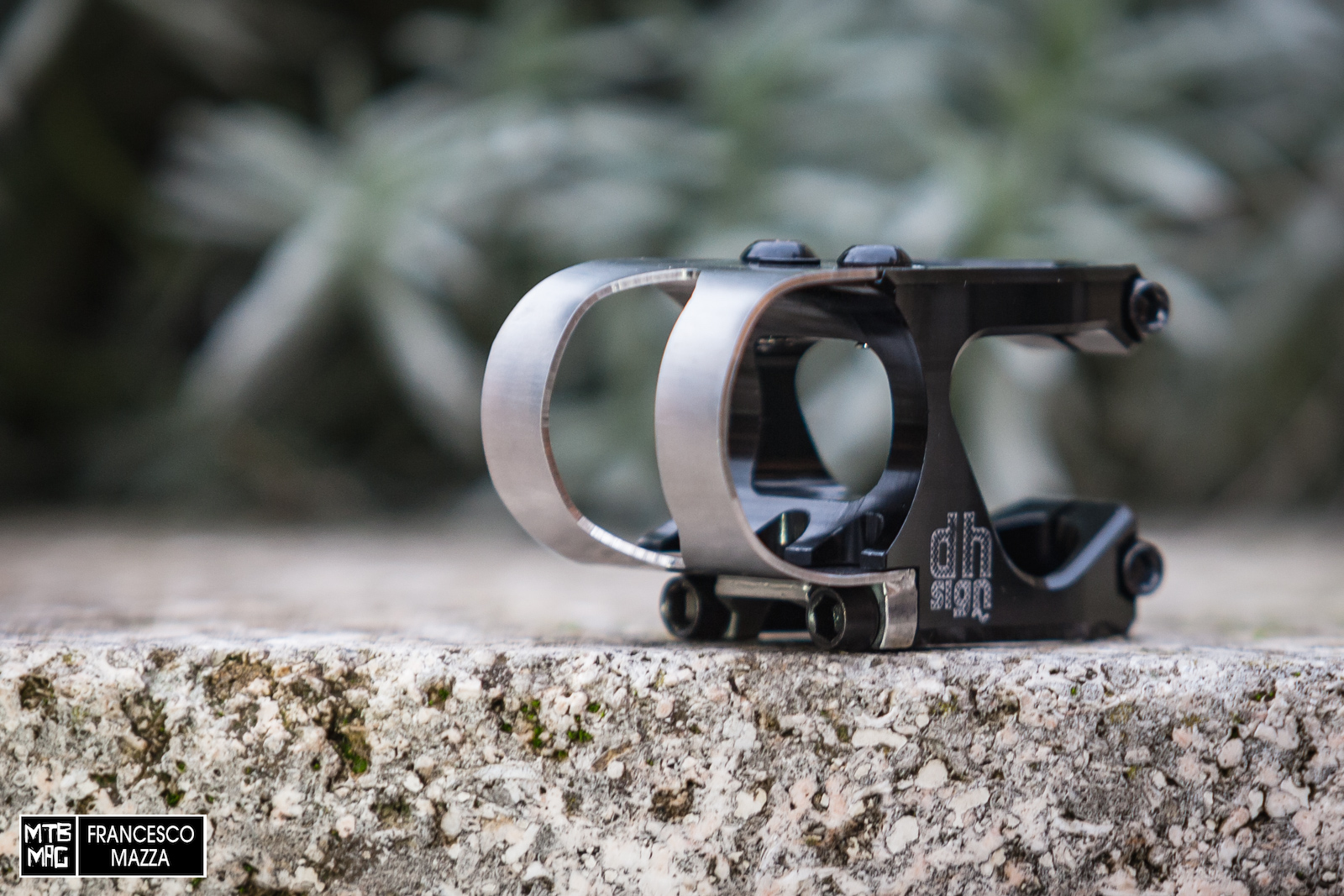 The main part of the stem has been reduced down only to the essentials, thanks to an accurate CNC machining that has allowed a drastic reduction in weight, assisted by the lightening of the steel band caused by enlarging the hole in its center. Now the stem has tipped our scale at 115 grams, a value almost half of the 225 grams of the first version. The HPX stem is available in a single 37mm length version which represents a modern and coherent choice with the current trend of geometries. As for the diameters of the handlebar clamps, both the 31.8mm and 35mm diameter versions are available. Numerous colors are available for the aluminum part of the stem while for the steel band, it’s just available in its native color. 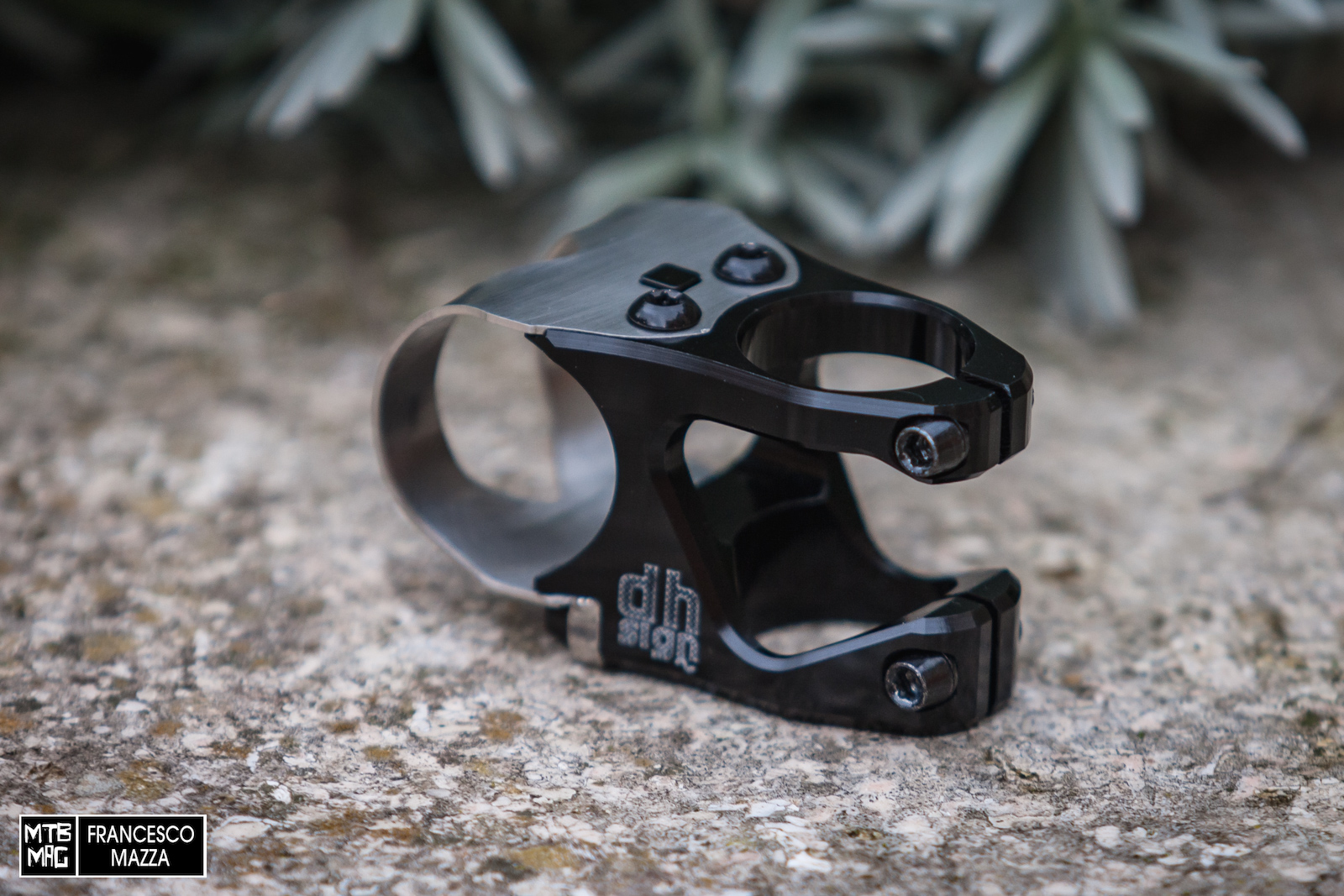 The innovative solution of the steel band to support the handlebar has an evident aesthetic impact on the entire cockpit to which it gives streamlined and clean, minimalist lines. The effectiveness of the system is excellent given that the handlebar remains locked in place with a very precise coupling of the clamp on the stem and with a very precise adherence of the internal surface of the band on the handlebar which allows an excellent distribution of the pressure of the closure without particular high stress areas. I had further confirmation by removing the handlebar at the end of the test, since the finish of the RaceFace Next R 35 handlebar was slightly marked by the shape of the clamp of its original stem, a RaceFace Turbine R 35, but it did not report the slightest sign following the test with the HPX. 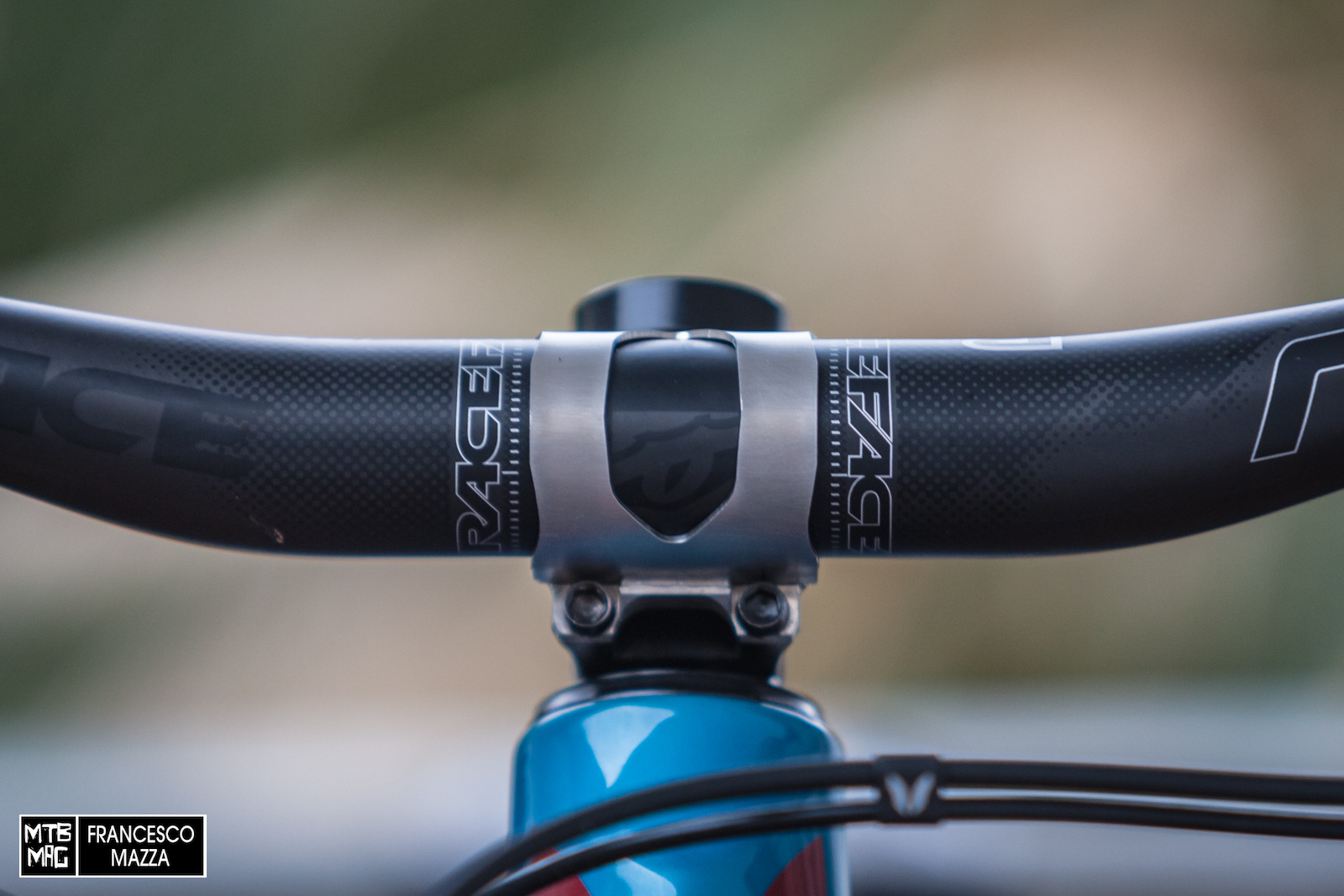 Also as regards the rear part of the stem, the aesthetics are light with the fork steerer which remains abundantly exposed. The minimal coupling between stem and steerer tube does not ensure enormous torsional stiffness but is more than enough for the intended use, also considering that the steel band provides very solid, rigid handlebar fixing. The stem has a rise height of 9mm so I eliminated a 1cm spacer below the stem to replicate the stack of the original stem, but it is necessary to consider that if you normally use a zero rise stem without spacer, mounting the HPX the height of the handlebar from the ground increases by 9mm. 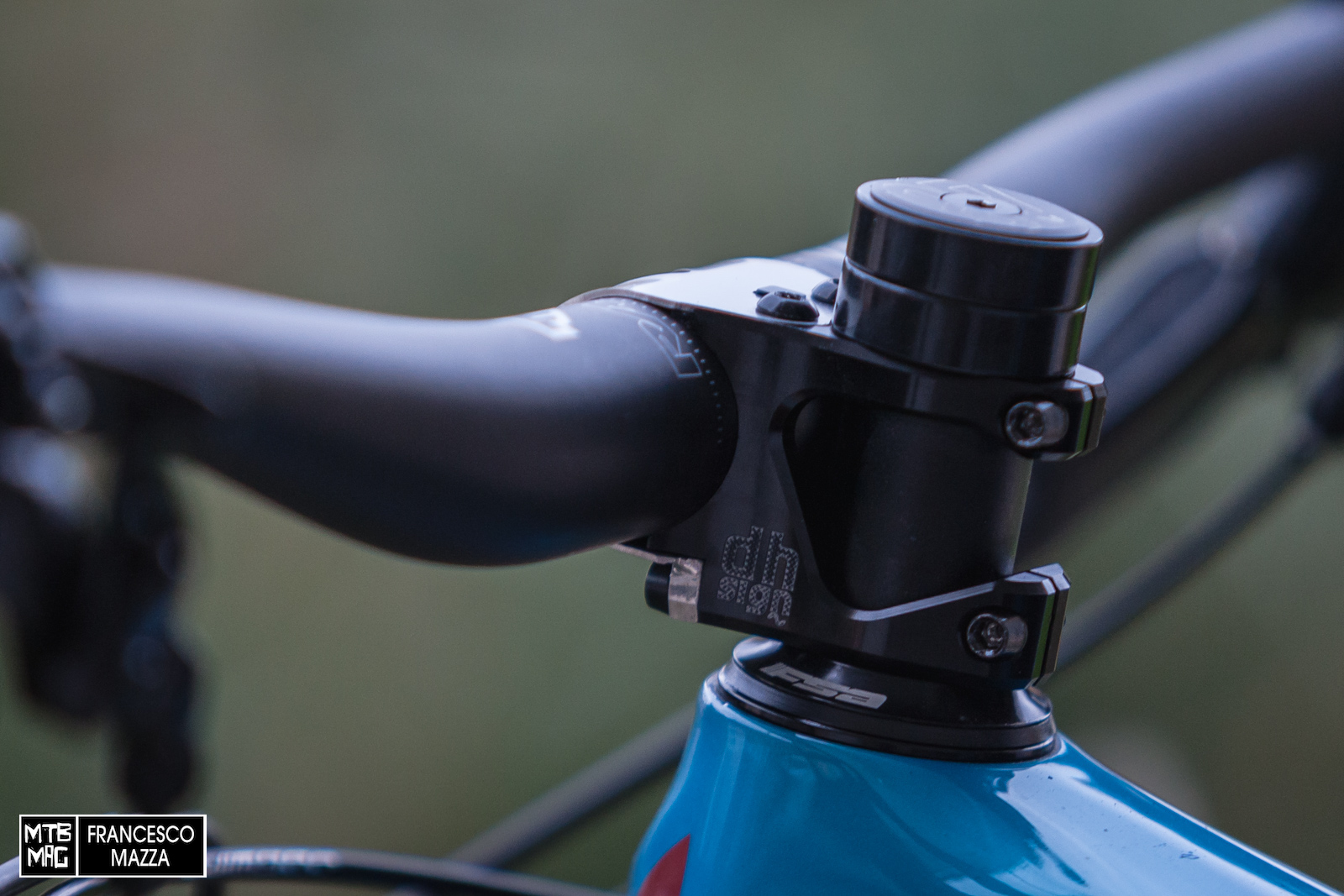 In general, the new stem from Dhsign is well designed, and thought out – significantly improved compared to its progenitor Hugo. It stands out with its minimal and elegant design, light both in weight and as an aesthetic. It’s also effective in adequately tightening the handlebar ensuring maximum safety especially in combination with carbon handlebars.

[Video] Carson Storch Gets a Visit to the Yard