Stoll is a Swiss brand founded by Thomas Stoll, a former cross country pro racer, and team manager of the Stöckli team till a couple of years ago. Retired from the racing scene, he fully dedicated himself to the design of carbon fiber frames. With some minor adjustments to travel and geometry, he gave life to two new bikes: the trail T1 and the marathon M1.

We tested the T1 130 130, the numbers indicate rear and front travel in millimeters. There is also a T1 with 140mm of front travel but we chose to test the most balanced version. All the details of the M1 are available on the Stoll website. 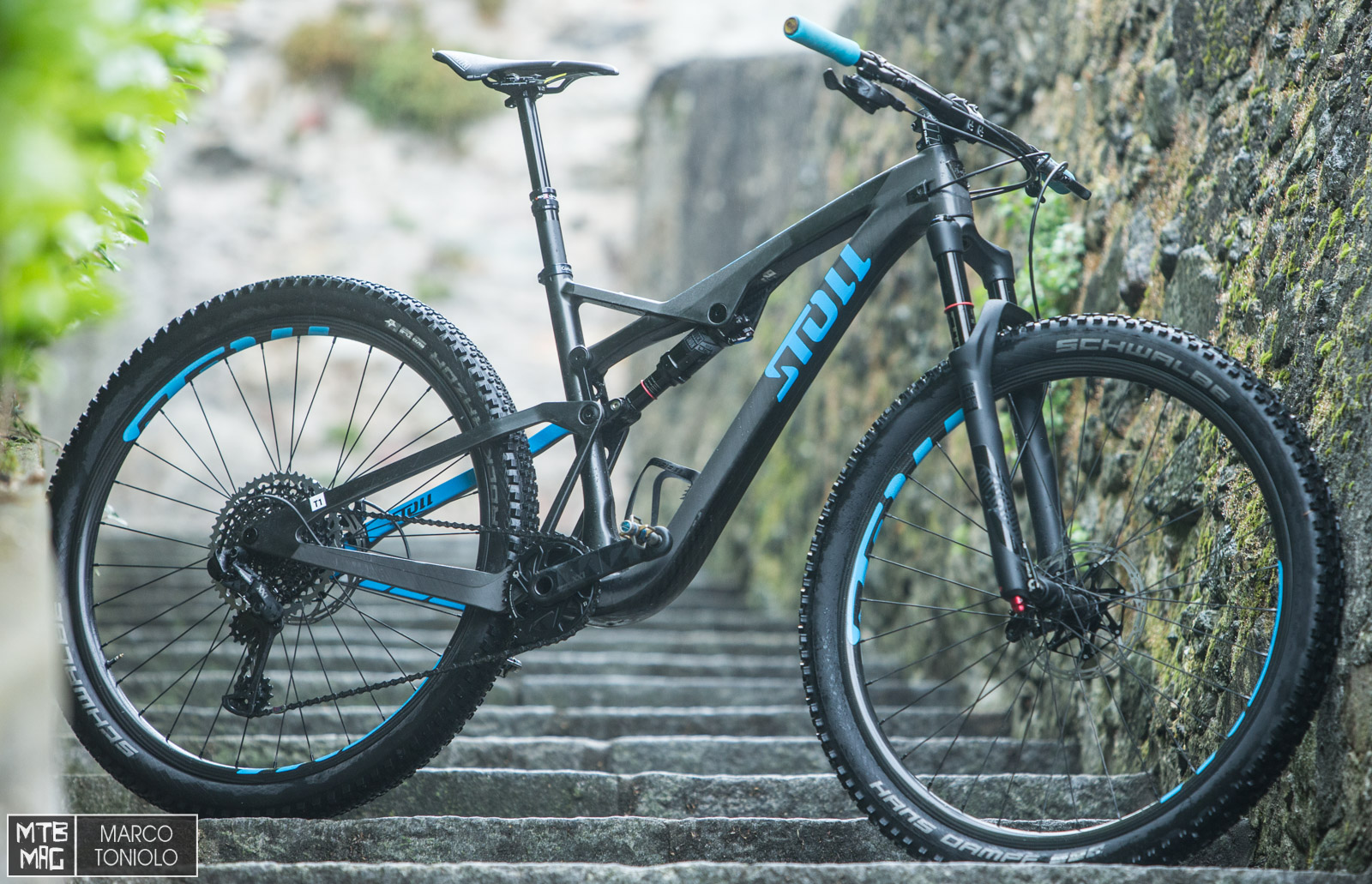 In the pictures you can see two different wheelsets: the Duke Lucky 29 Carbon, and the Bike Ahead Biturbo RS. 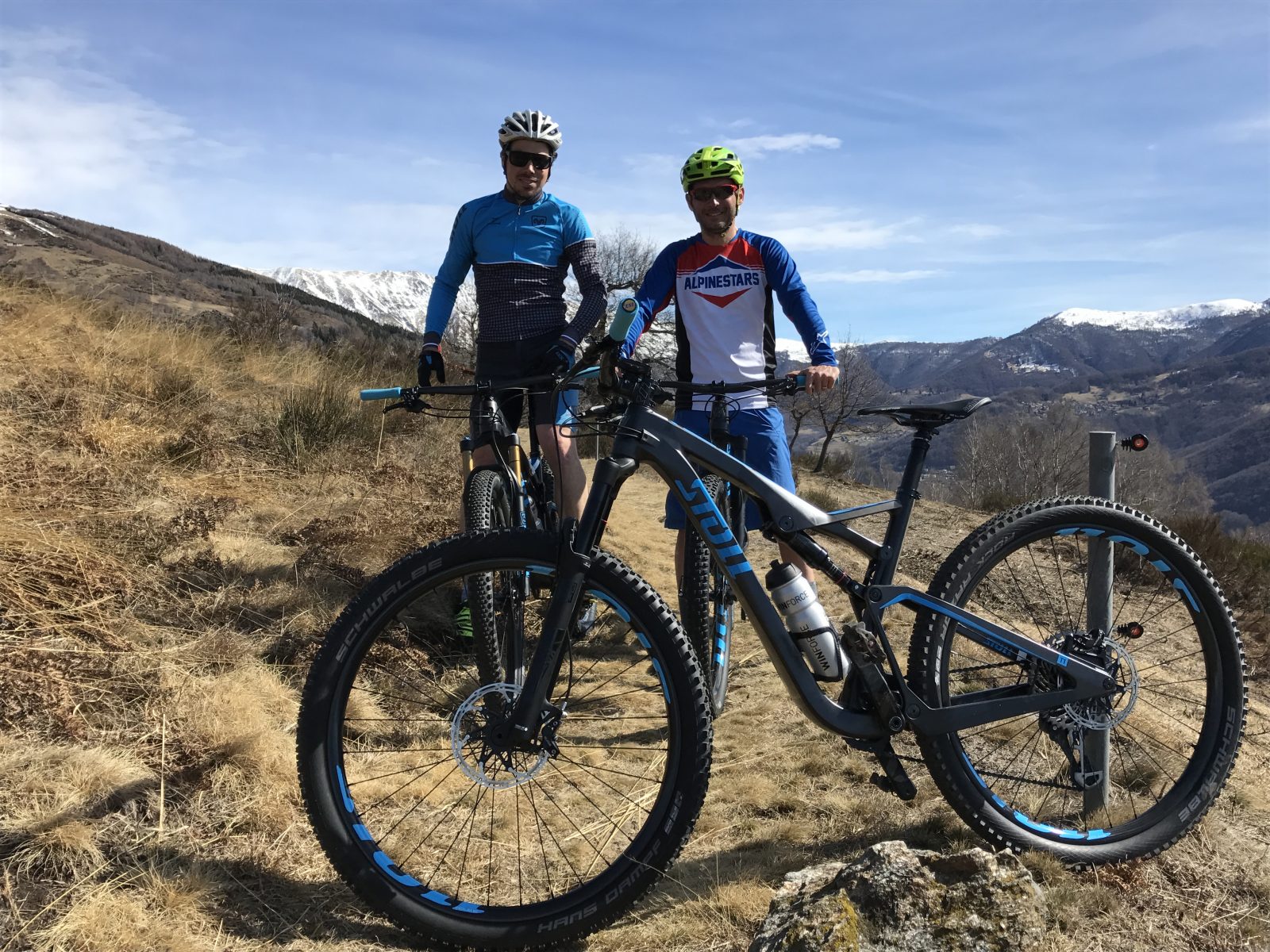 Thomas Stoll on the left.

The full carbon frame is manufactured in Germany. Thomas made this choice to have maximum control over the production process and the speed of realization. The main concept of the Stoll brand its extreme customization, from the specs to decals colors and even a unique feature: Thomas himself goes to deliver the bike to the client or meets them during a weekend test ride. This way, the relationship between the brand and the customer is very close and, in a way, it is worth the price.

By the way, the frame costs 4,000 Euros, less than some of the most “titled” competitors, and it can be manufactured and delivered in approximately 3 weeks. This is a young brand which focuses on the relationships with the clients, thanks to the small numbers, and it offers you a unique bike. Stoll relies on partnerships with select bike shops for assistance, but the products are only sold via email or by personal contact. 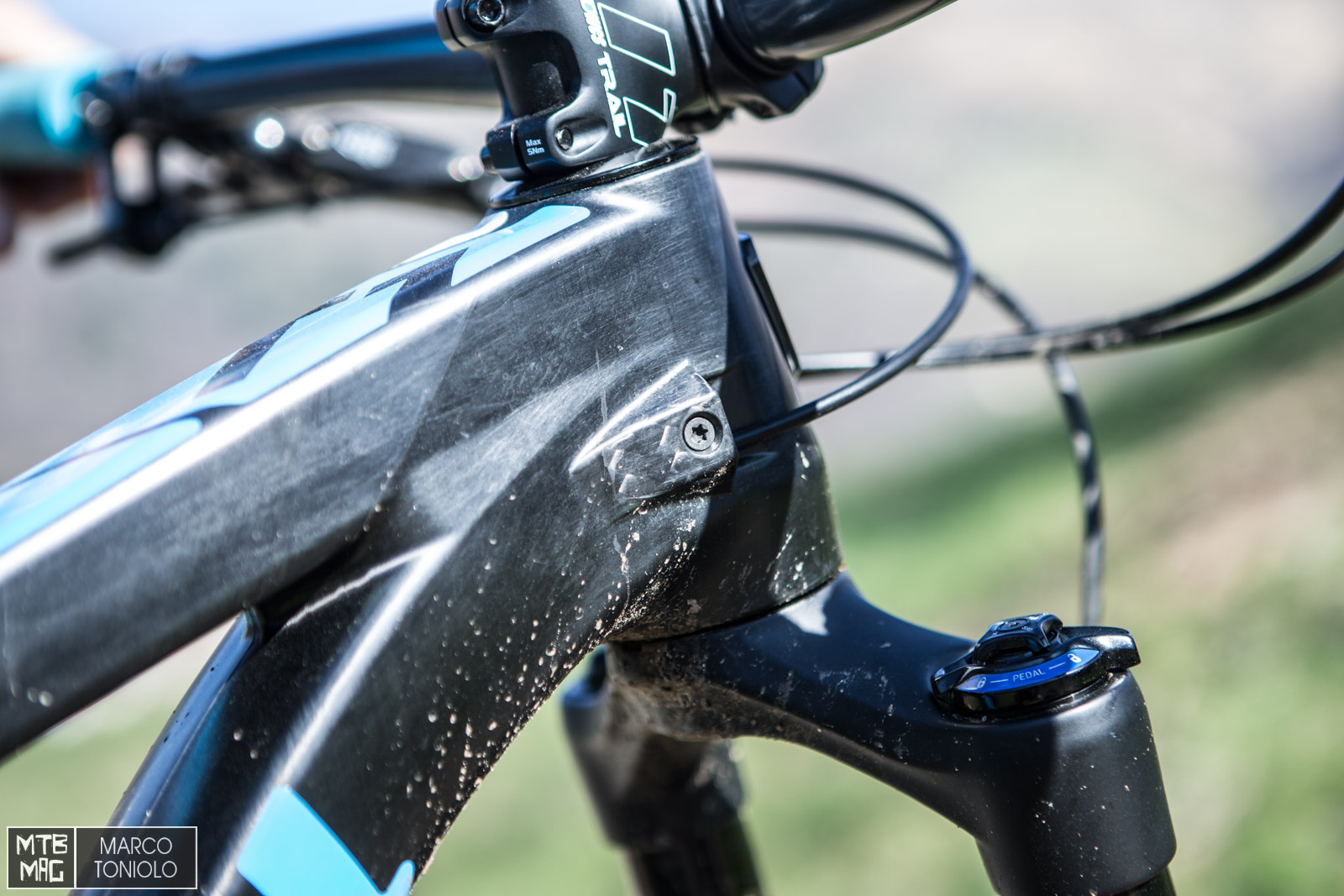 As you can imagine, a former pro cross country athlete cannot but be obsessed with weight, and Thomas is no exception. To be lighter, the frame is not painted, and it weighs 2,600 grams with the shock installed. The carbon is totally exposed and one can also choose not to have the blue decals. These, at first glance, can be considered a bad choice on a 4,000 euro frame, but they are resistant to scratches and most of all, they can be replaced and bought as spare parts from Stoll. Only the links between the rear and front triangles are made of aluminum. 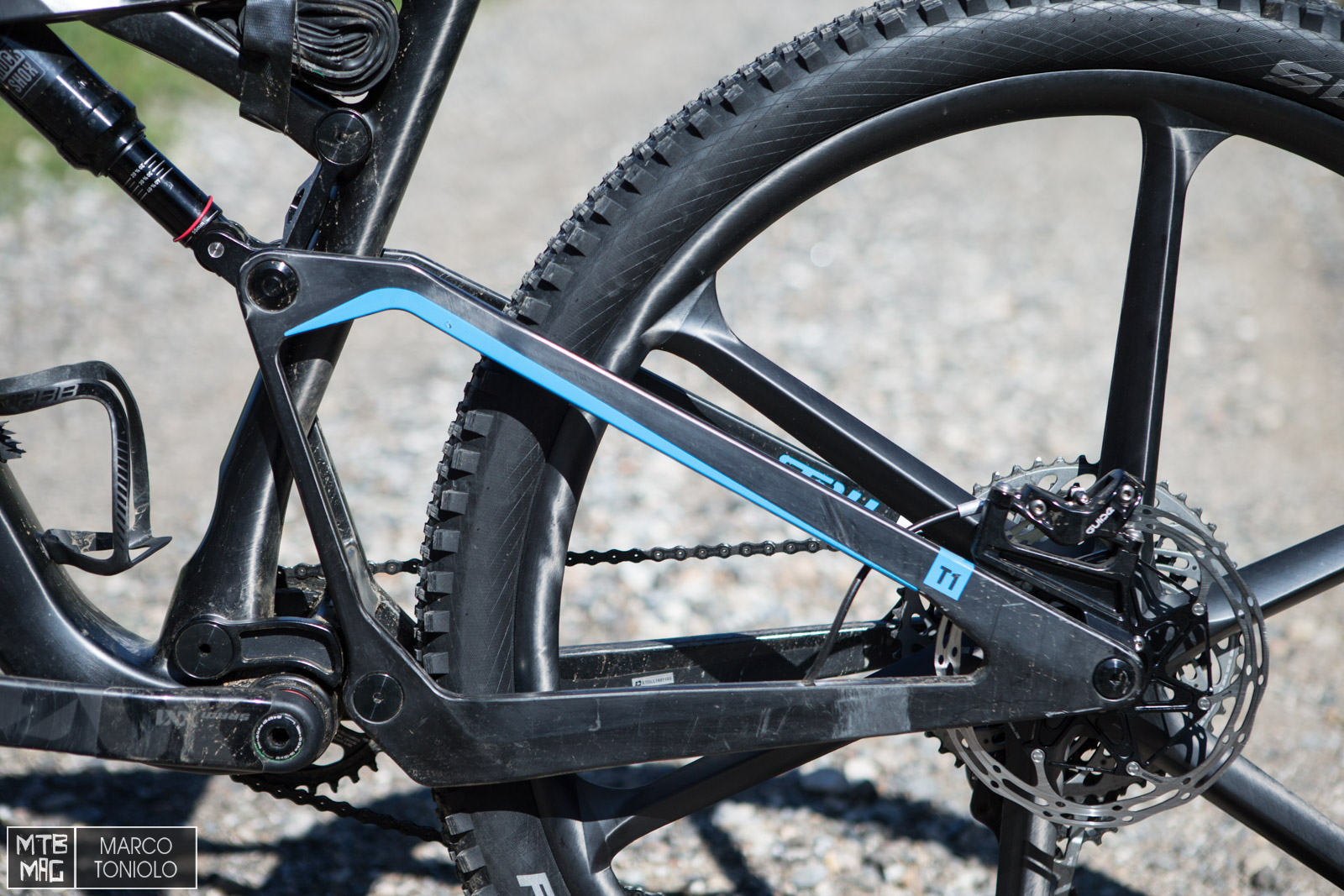 The suspension system is a VPP. Since the T1 has a single chainring, the rear triangle is closed on both sides unlike for example on the Santa Cruz Bronson. This conveys more stiffness from the bike.

Regarding the full carbon non-painted frame: the down tube is protected by a thicker carbon layer with no added plastic. 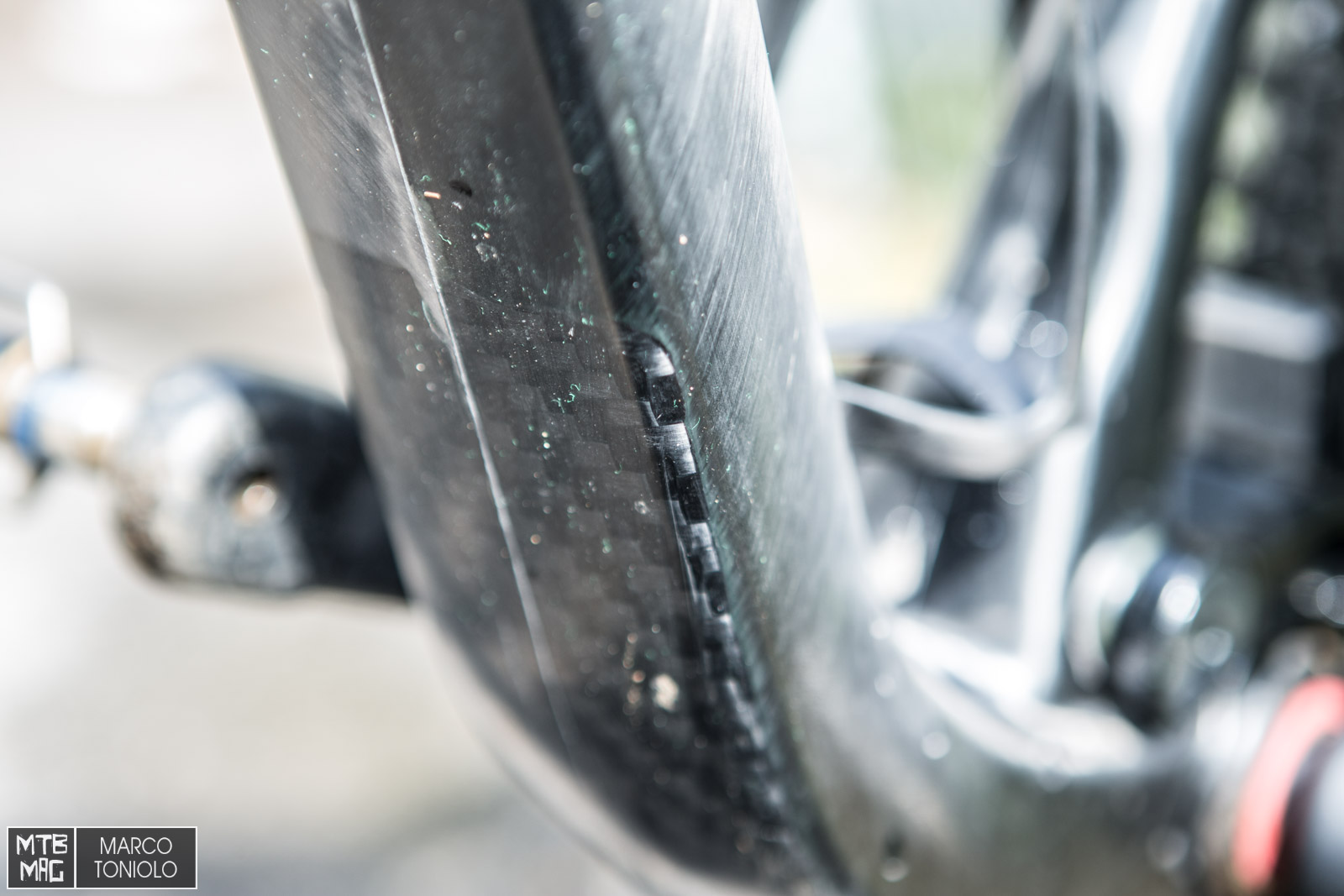 Cable routing is completely internal, rear hub is 15×148, fork hub is 15x110mm (both are Boost). The axles and bearings have large dimensions.

You can choose the specs according to your preferences. Stoll offers SRAM / RockShox components, in particular a Deluxe RT3 shock with custom tune specific for Stoll. On the tested model all the suspension parts are from RockShox with Pike and Deluxe, while the drivetrain is a SRAM Eagle 1×12 with 32T chainring (replaced with a 34T). Brakes are SRAM Guide Ultimate with two 180mm discs.

The wheels are very interesting: Duke Lucky Jack 29 Carbon with 24.8mm inner channel and 1,500 grams of weight. For the record, the rims are the same used by Julien Absalon, while the hubs are DT Swiss 240s without the red decal which doesn’t match with the rest of the bike according to Thomas. During one test ride with Thomas we also used the Bike Ahead Biturbo RS wheelset, at the end of the article you find some feelings and considerations about those truly unique wheels.

The tires are from Schwalbe and are quite bulky: 2.35 Hans Dampf at the front and Rock Razor at the rear, inflated respectively at 1.7 and 1.8 atm, both tubeless. 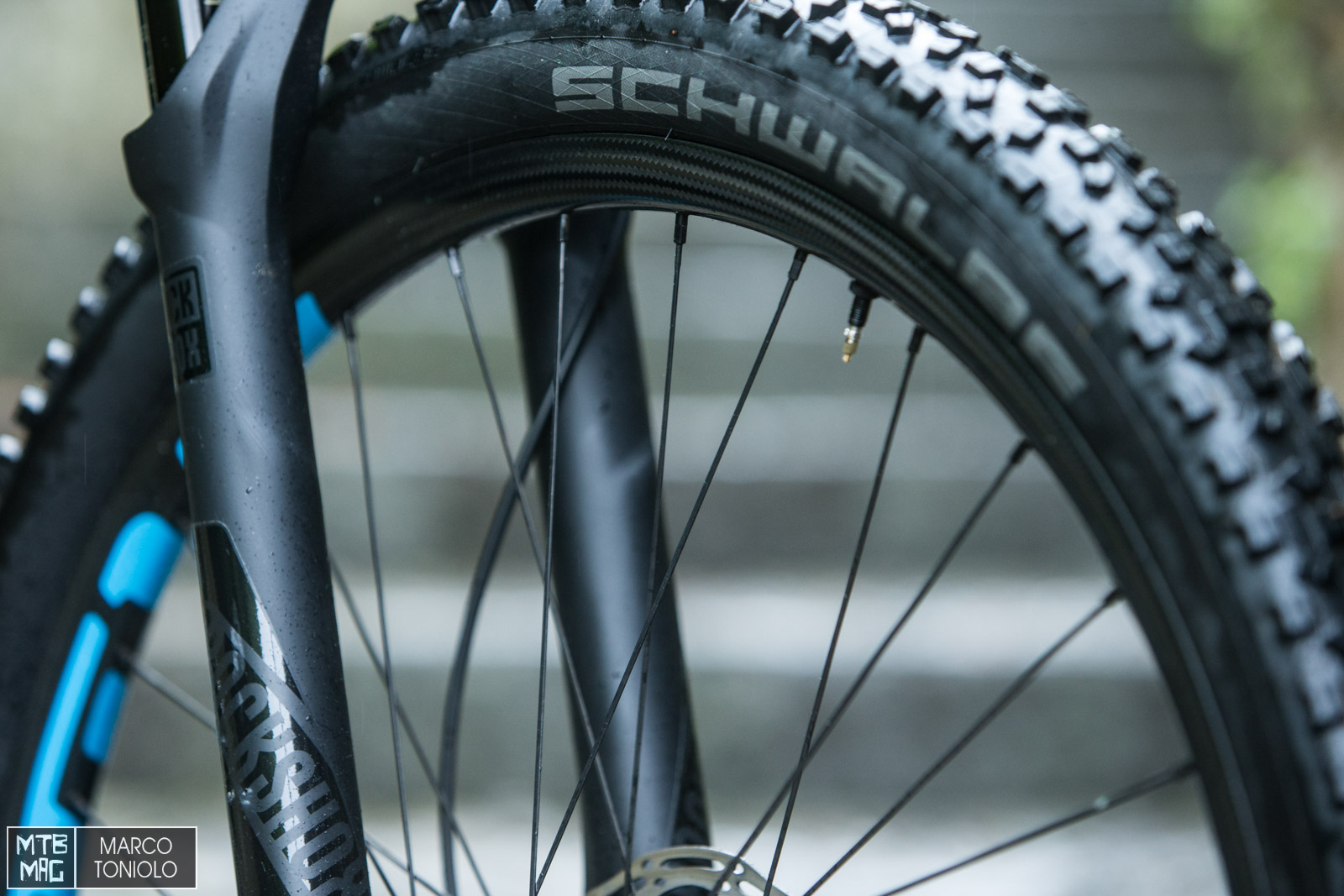 The bar is another great part by Bike Ahead, 780mm wide with a Ritchey Trail stem. We preferred a really short 45mm stem. Esi Grips made of silicone are comfortable even without gloves but they require a bit more patience to be installed and removed. 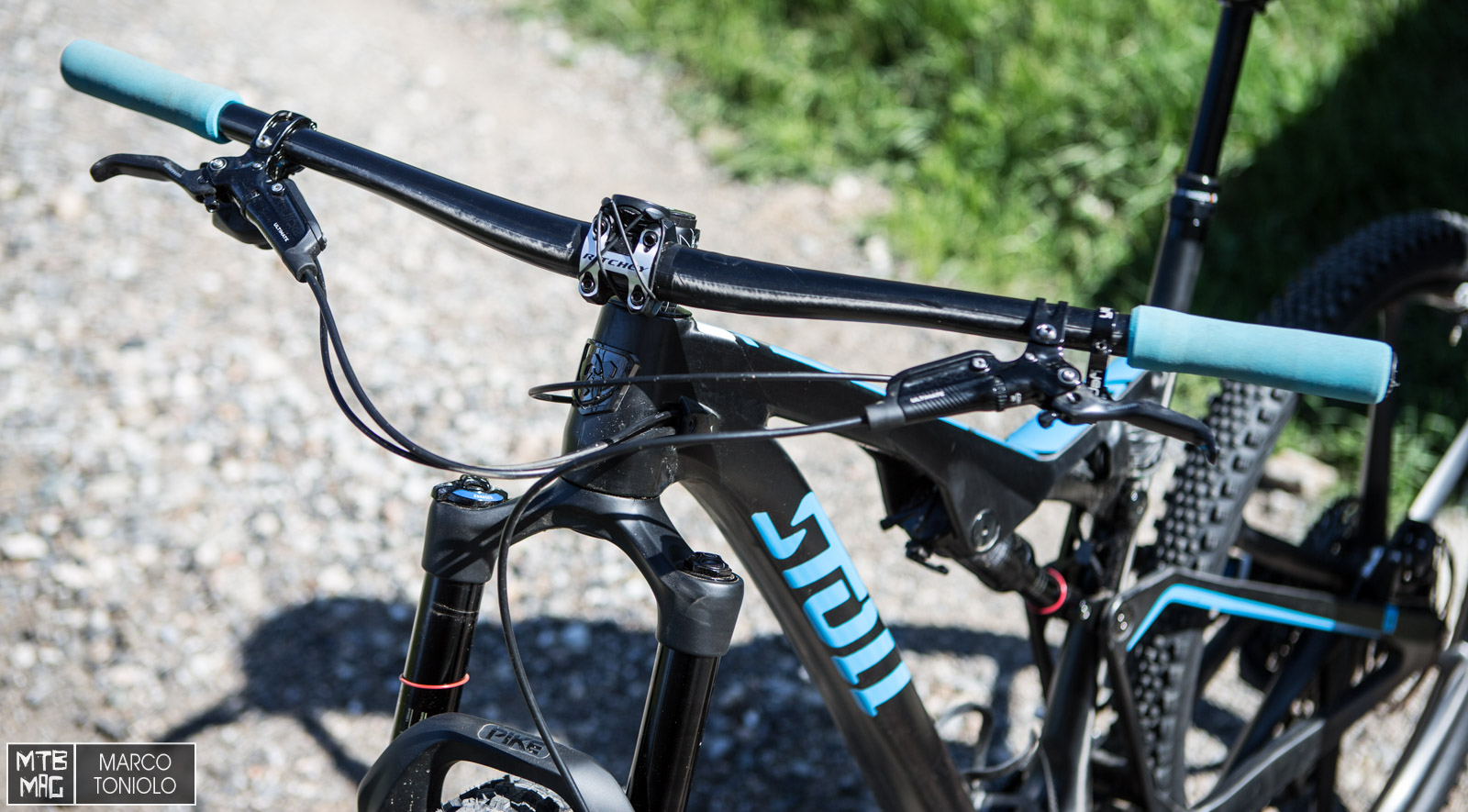 A Swiss dropper post is a must have on a Swiss bike. The Uptimizer by Yep Components is quite possibly the best one on the market, and the T1 is equipped with the 125mm travel version.

The Stoll T1 is not in line with the new extreme trail bikes. On the contrary, with a 68° head angle, agility has been put first, considering also the length of the rear triangle. The bottom bracket height, at 335mm, balances these characteristics, allowing to have a low center of mass when fast cornering. In one word the geometry of the T1 is “alpine”, because it looks like it’s been designed for the windy trails of the Swiss mountains rather than the specifically built flow trails. 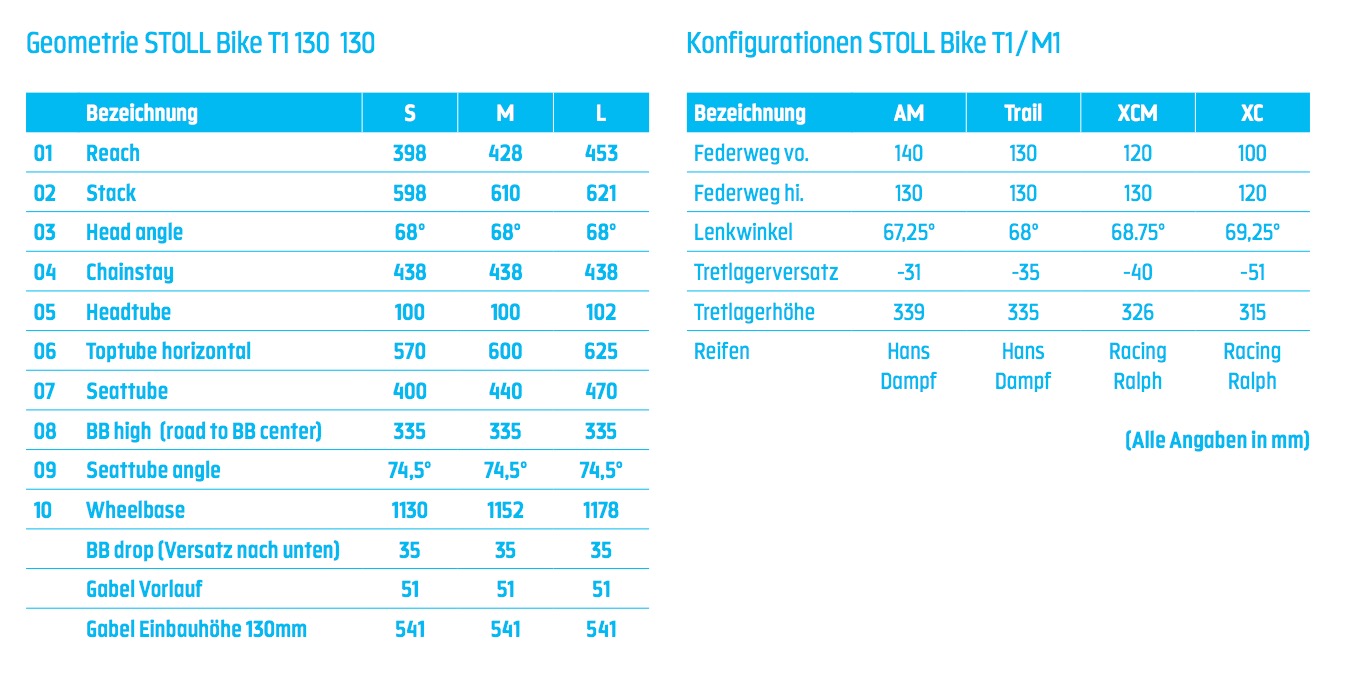 We consider a trail bike to be good both for climbing and riding downhill without excelling in a certain field. In particular it has to be good on technical tracks and be extremely agile on climbs. It is that kind of bike which allows you not to stop. If you think about it, not an Enduro nor a XC bike has this characteristic, because no matter if climbing or descending, you always reach the limit at some point. 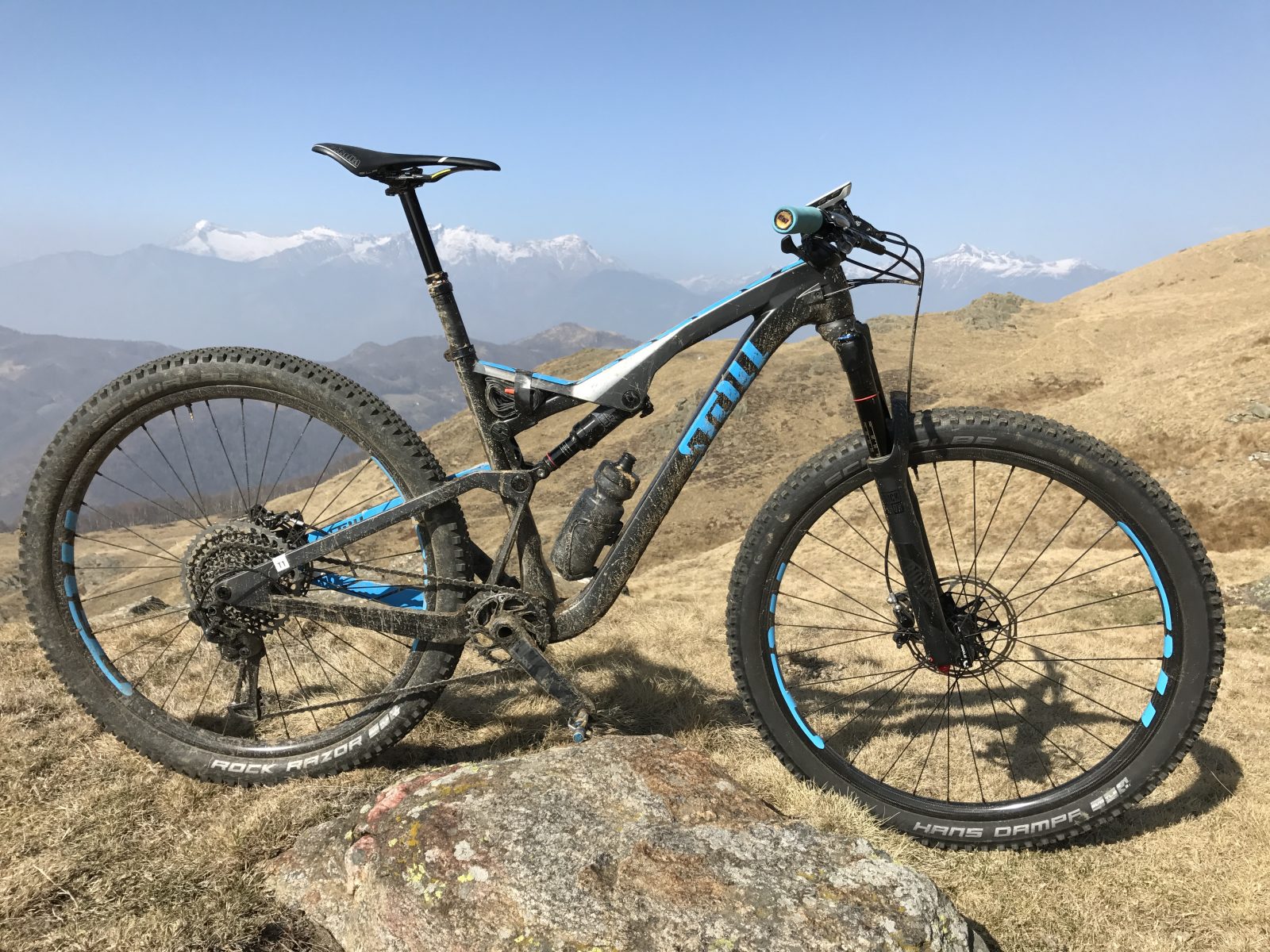 It is with this mindset that we tested the Stoll T1 for over a month and a half, and we must say it didn’t let us down at all. On climbs we liked it straight away, especially the feeling of transferring all of your power to the ground with an instant feedback: almost no wasted power. It is not the first time we’ve tried a VPP system, but its character on the Stoll is very reactive and effective. The pedaling position is really efficient even with the shock completely open. This can be achieved also thanks to the steep seat angle. On apparently flat trails which go up and down, the perfect adjustment is to set the compression lever at medium position, which provide good traction and absorption capacity.

On flowy climbs, the lock position of both the fork and the shock allows you to push to the limit, thanks also to the light weight of this trail 29er. 29” is the perfect format for this kind of bike for one simple reason: with the same rolling resistance, on technical ground, the traction is unbeatable. The bike is as light and reactive as a Plus bike will never be, but at the same time it climbs everywhere. The possibility to set low pressure values in the tires helps a lot, especially when the rims, like the Duke we used, support the tire’s with some added volume.

We replaced the chainring of the Eagle transmission because the 32 did not allow a proper use of the 50t cog. With the 34 it is easier to use all the gears, not ending up pedaling too fast on technical climbs. This forced us to complete some sections off the bike.

The Stoll T1 is a sporty trail bike since it is dedicated to those who like to pedal a lot. Downhill the bike gives its best on twisty and technical sections rather than on fast and rough ground. The 68° head angle says it all: on tight turns that require front wheelies the T1 is super agile, it turns with almost no effort. Considering the steep head angle and the short rear triangle, this is the most agile 29er we’ve ever tested.

SRAM and RockShox components work pretty well together, especially the smooth and powerful Guide Ultimate brakes, which we are big fans of. The front suspension is linear along the whole travel, and right at the end, the progressivity increases dramatically. The new RockShox Deluxe has been a nice surprise: it is sensitive in the first part of the travel and it soaks up big hits very well. It is far better than the Monarch, especially on long descents, where the Deluxe is not affected by overheating even without piggy back.

The most incredible thing is how easily the T1 jumps. On the test trails we had to be careful not to land too far to be able to enter the next turn without overcooking it. In fact it is super fun to pump it over the obstacles. 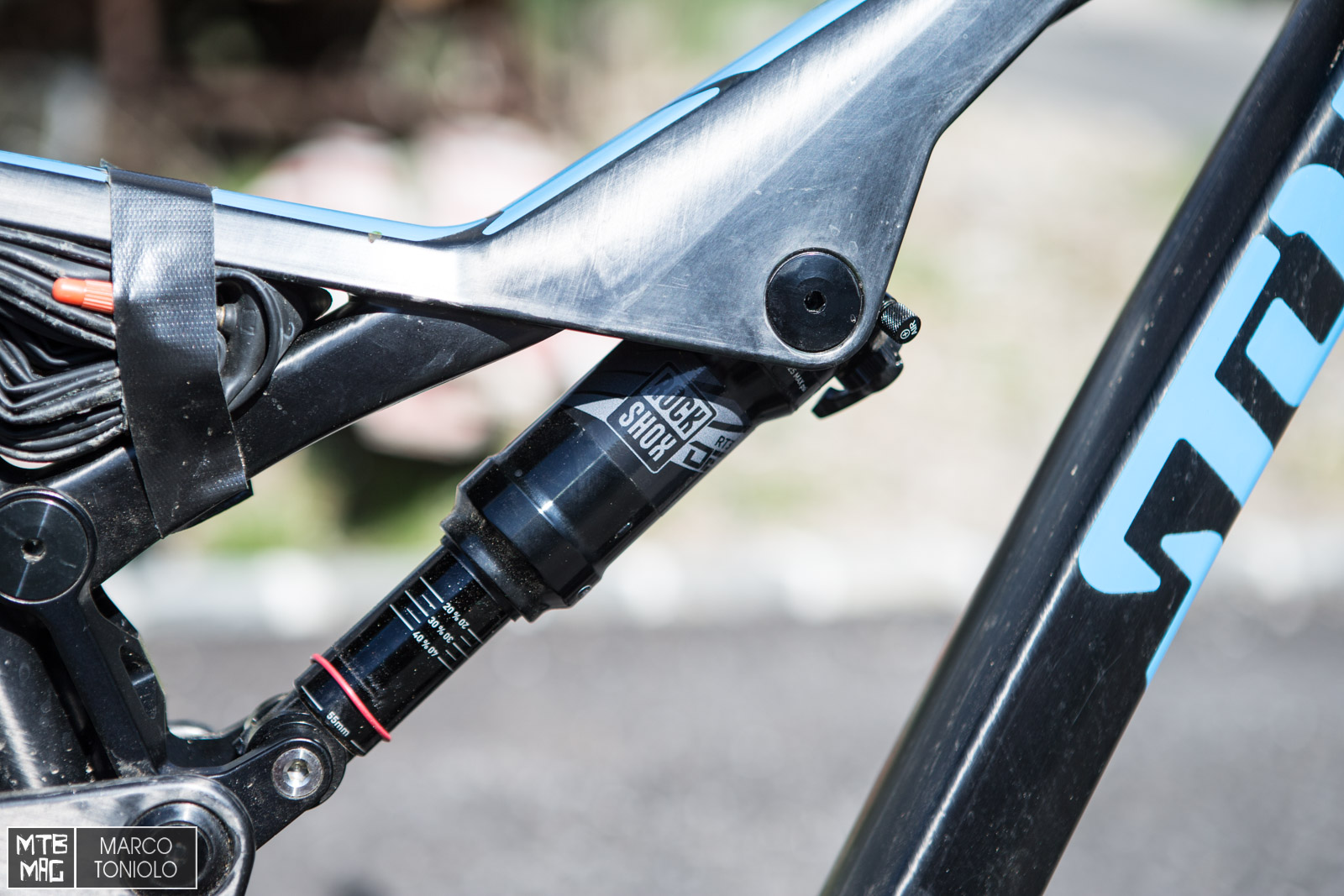 On fast and rough terrain the T1 is not the plushest bike, but thanks to the higher volume tires and the great tire/rim match, it provides good riding comfort. Unlike riding other more aggressive trail bikes, with the Stoll you have to go for cleaner lines and ride a bit less aggressive. It needs to be said that those aggressive trailbikes then are hard to ride uphill, while the T1 is more an allrounder.

We were very happy with the Duke wheels, which have good stiffness and resistance to the impacts. Since we used lower pressure than we are used to, we hit some rocks with the rim quite a few times. This was not an issue at all and the wheels are still perfectly true. Not much to say about the DT Swiss 240s hubs, they are always the best in terms of rolling resistance, strength, and ease of maintenance. 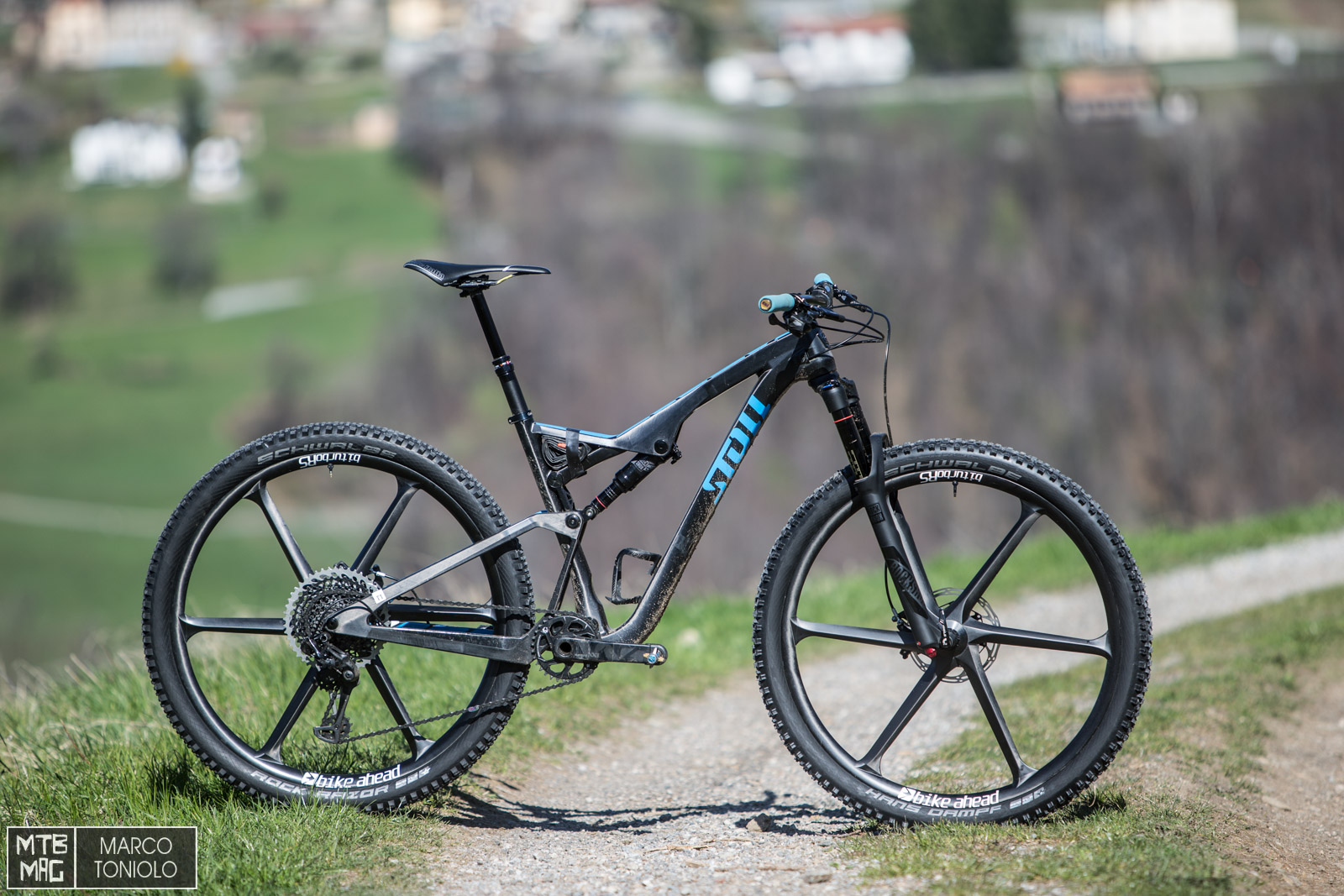 After approximately four weeks of testing, Thomas came to give us to test these 6-spoked wheels, made by the same German company which built the frame, Bike Ahead (here’s the technical chart). Having a 27mm carbon inner channel, the weight is impressively light: 1,200 grams per pair. These wheels are being talked about a lot and proved to be extremely stiff, maybe too stiff even for a fully suspended bike. We used the same tires of the bike test as well as pressure values, and still one long descent was not enough to get used to the incredible precision and agility the wheels provide thanks to their lightness.

Overall, the negative aspect is their stiffness: the whole rim and spokes structure does not flex at all, and it is not comfortable to ride. We think the target of these wheels is a granfondo racer who rides a full suspended bike and wants the maximum lightness possible (who doesn’t?) and traction at the same time, which is achieved through tires inflated at low pressures. A side note: on climbs we can compare them only to the Lightweight we tested on the road bike. You get incredible acceleration and have no more excuses if you are still slower than your mates.

The Stoll T1 is a trail bike with great pedaling efficiency on climbs and technical trails, it is as well agile and fun to ride downhill. It is perfect for alpine trails lovers where you pedal a lot: the 29” wheels traction combined with the geometry, the effective pedaling position and the perfectly working suspension, make this bike a real trail weapon.

The full carbon frame made in Germany is not cheap, but still cheaper than many other brands which produce in Asia. It is to be noted that the unique client treatment offered is priceless.