While there have long been many solid players in the brake game outside Shimano and SRAM, few have seemed to make such quick headway in the market – or at least on the race scene – than TRP. Stepping up to the plate to battle with Saints, XTs and Codes is their DH-R EVO brakeset, which is aimed at gravity usage such as Enduro and Downhill as well as for e-bikes. Interestingly, through an unconventional approach to the design of easily overlooked things and for that matter, conventional things such as the hose, rotor and master cylinder piston, the brakes manage to set themselves apart while still flying under the radar. A few months ago, TRP kindly sent out a sample set for us to test – here’s how they’ve been holding up … 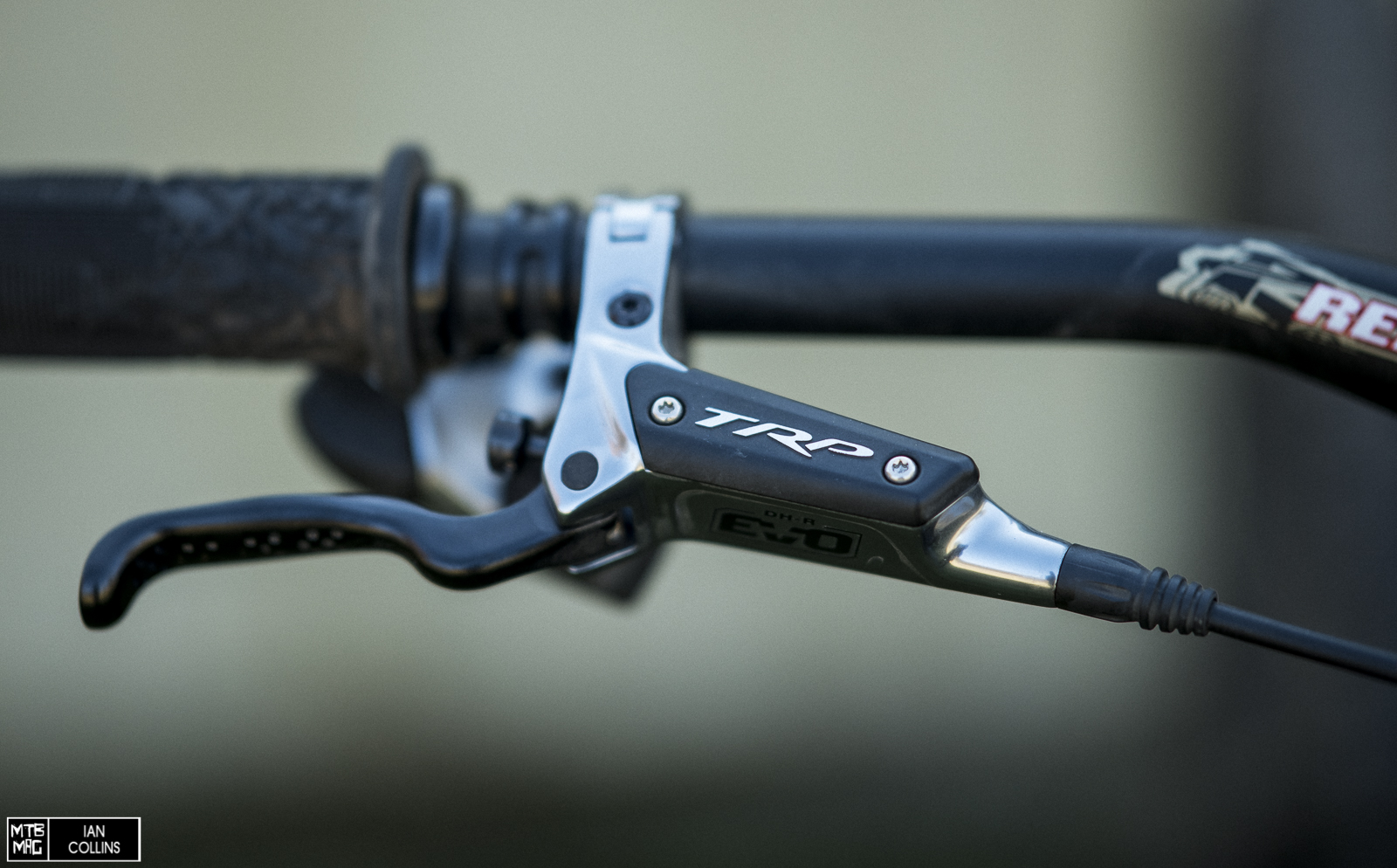 The DH-R EVO uses a 4 piston rear brake in a sleek polished silver finish. The large pad pockets help dissipate heat and make pad swaps easy as you don’t need to remove the caliper to do so. 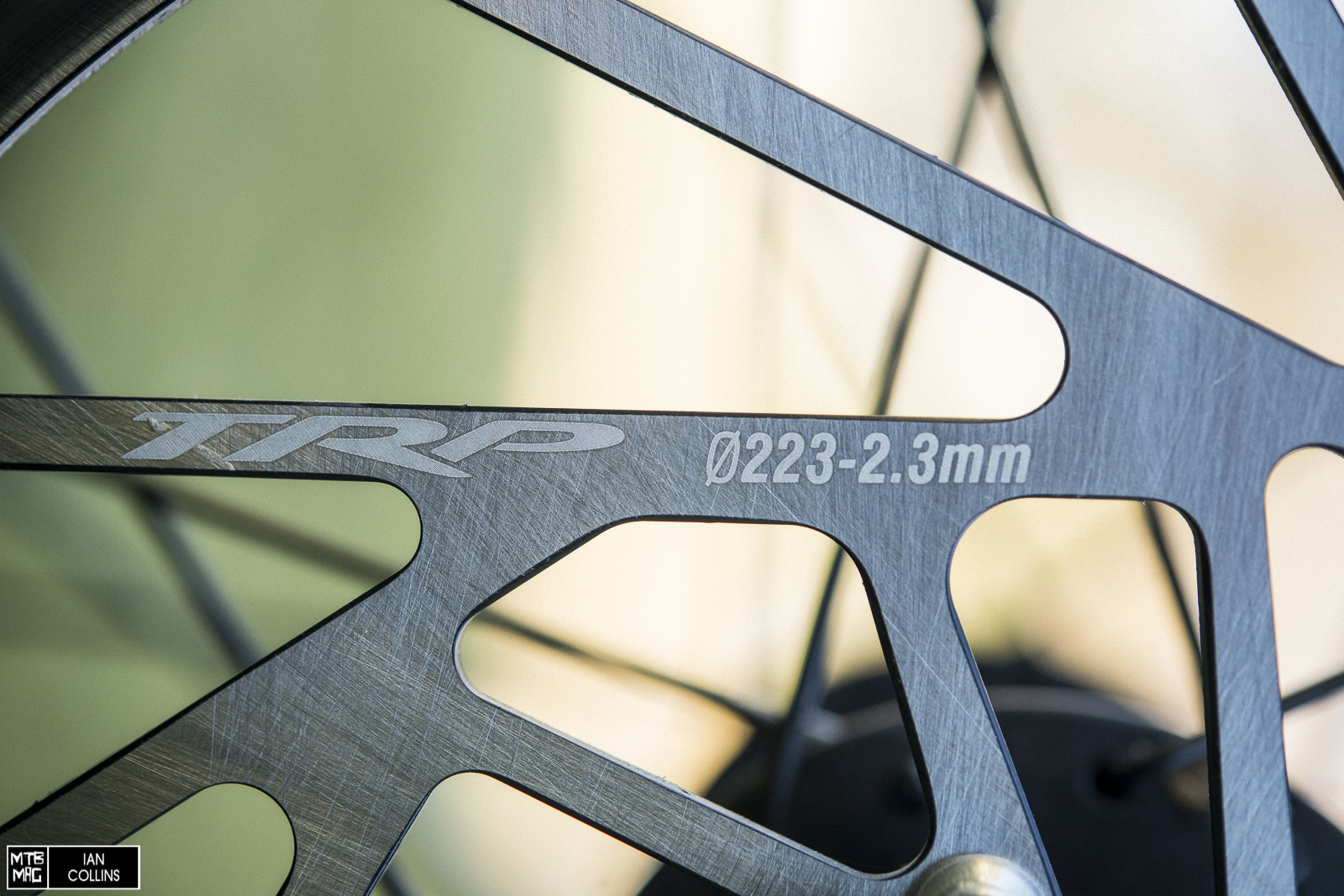 TRP opted for substantially thicker 2.3mm rotors across the board, which is about a half of a millimeter thicker than the average rotor. That may not sound like much, but spreading out all that added material over the rotor’s surface area helps it manage heat by a substantial amount – an 8% improvement according to TRP. It also makes for a stiffer, stronger and more robust all around rotor. 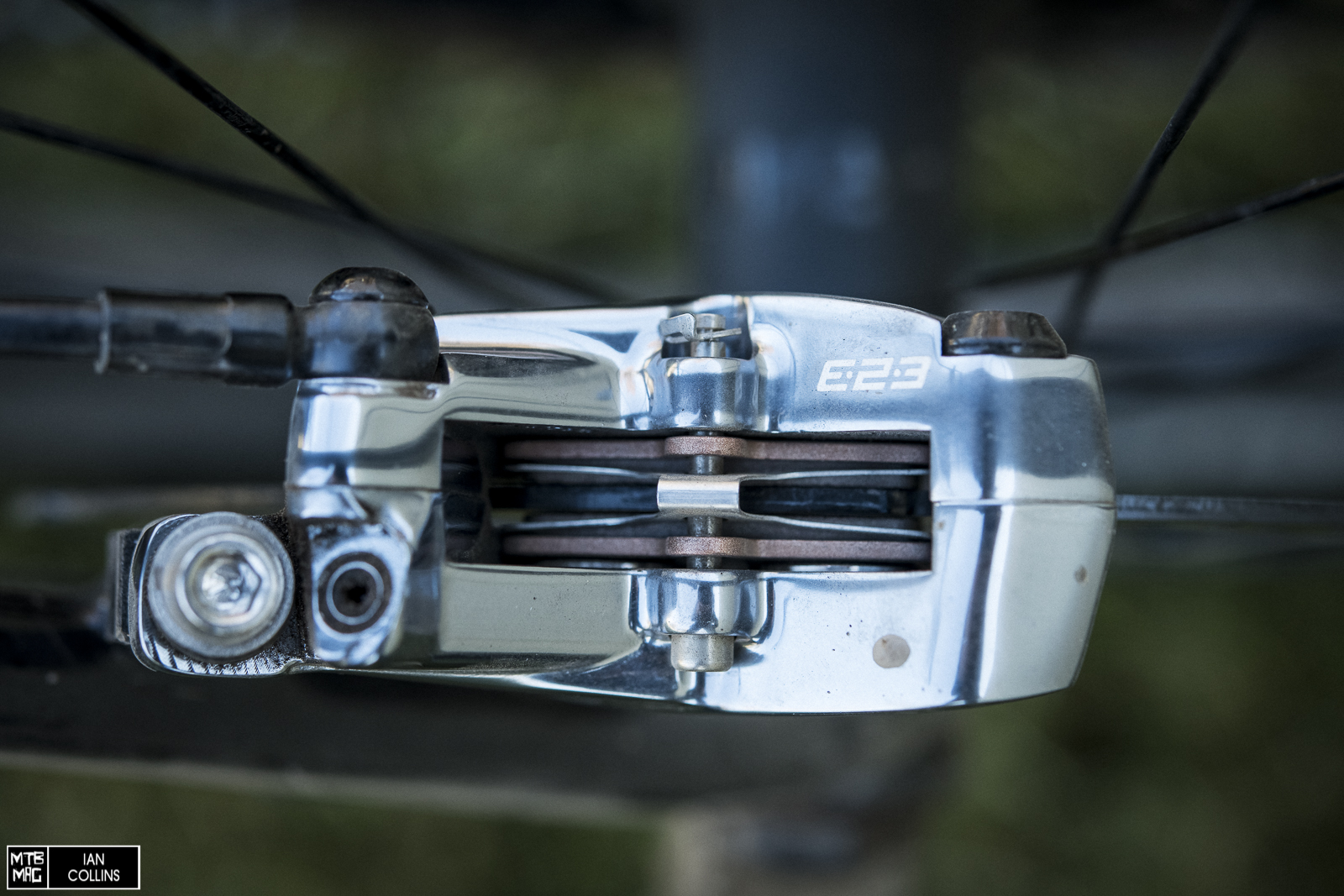 The brakes ship with TRP’s resin compound brakes, but a sintered metallic version is available for improved wear and power in adverse conditions. The brake levers feature a split clamp and are right / left specific. There is a plastic sleeve inside of the lever’s clamp surface, which helps prevent damage to your handlebar while still providing ample bite. Personal side note: I once hit a tree head on and the clamp of my brake lever crushed my carbon fiber bar. I wonder if the plastic sleeve would have better taken an impact like that … The ample sized reach adjustment knob is very easy to access and utilize, gloved or not.

A closer look at some of the relief work inside of the brake lever body, which is quite substantial in size. The bike I tested the DH-R EVOs on has both a SRAM AXS seatpost and drivetrain, and while TRP does have “Matchmaker” style adapters, they were developed before AXS hit the market. This relegated me to using individual clamps, which worked pretty nicely, but due to the display on my e-bike I did have some limited adjustability (pictured above). For what it’s worth, TRP has AXS friendly adapters in the works. 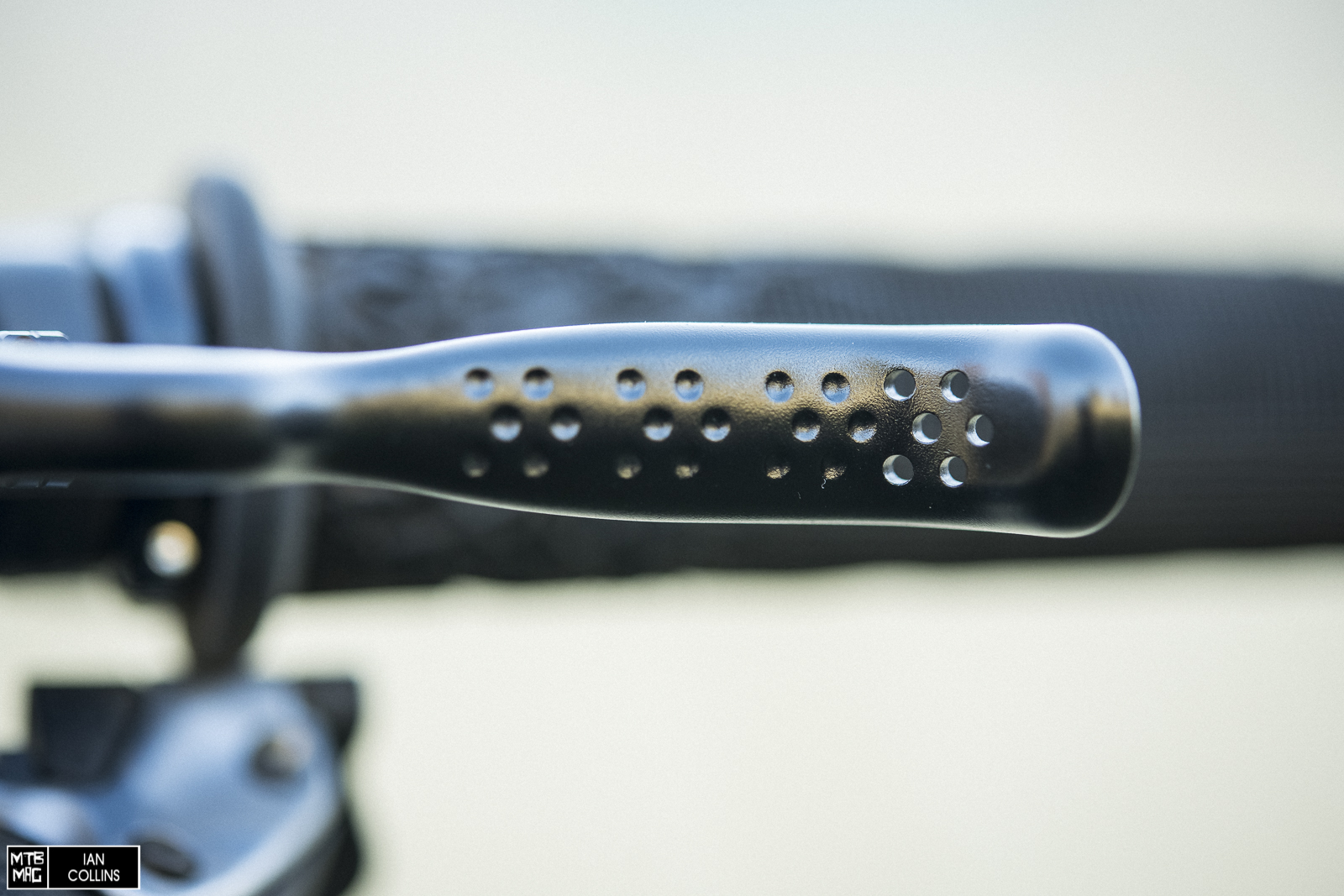 The lever blade is not only ergonomic and nicely curved, it has dimples and holes for added grip. One last nice touch – the master cylinder cover is alloy, not plastic.

When TRP first sent these brakes out, I waffled over which bike I would put them on – Downhill, Enduro or e-bike. Given that I wanted more power out of the current brakes on my e-bike and that these shipped with a massive 223mm rotor, I didn’t have to over think it. There was also the fact that the ~50 pound bike is also a good vessel for pushing the limits of a brake’s performance. For what it’s worth, I tested 180, 200 and 223mm rotors and was also fortunate enough to spend time on both the metallic and organic pad compounds. Anyhow – unfortunately the initial set that TRP sent out had a very minor bit of oil weeping out of one of the rear caliper, which contaminated my pads very early on. I sent the brake in for examination, received a new one, and reached out to TRP for their official word on the matter. It turned out that the seal that is sandwiched between the two caliper halves was nicked during the assembly process, creating a very slow leak. So far, TRP has had just 3 calipers come back, including mine, which makes for a .004% warranty rate. The official word was this:

“In the caliper that you sent back to us, we put it under pressure for 2 days and cycled it 100 times every 4 hours during the day time. We were able to see a little bit of weeping oil from the rear and upon complete disassembly, found the o-ring had a small tear causing that leak. This is not uncommon from any manufacturer as the bolt connecting the two halves can sometimes pinch that o-ring. While that leak may not happen immediately (the reason it passed our Quality Control checks) when the caliper is starting to be used, the two halves will flex under power, creating more movement around that o-ring and allowing small amounts of oil to escape the system.

As I was curious how this situation would be handled for a regular consumer, TRP explained their warranty process. First off, their program covers 2 years from the day of purchase and anything that requires a caliper swap would include fresh pads. Basically a customer can reach out to TRP directly via email/social media or through a bike shop and depending on the situation they would typically be looking at roughly 4 business days of down time. Okay – now that’s out of the way, we can talk about how the brakes actually performed. At this point, I’ve had a few months of ride time in a wide array of conditions in Idaho, Washington and Utah. Starting with the installation, the DH-R EVOs ship with plenty of excess hose, so trimming them down and reconnecting without having to do a full bleed is a breeze. There are two things I really liked about the hose itself. You can call me weird for being enamored by a brake hose if you want, but hear me out. First, it didn’t have a mind of its own – rather it was easy to “train” around the individual bends and curves that my bike required. Second, TRP uses a slightly smaller hose diameter of 5mm – this not only improves hydraulic pressure and thus power, but it also feeds through internal routings with less of a fuss.

As far as the lever is concerned, the shape, grip, and length of the blade was very comfortable. It also had smooth action and plenty of range in reach adjustment. Now let’s get down to brass tacks – given that the DH-R EVO is marketed as a gravity brake and used by the likes of Brendog in both Rampage and the World Cup races, I expected that when paired with a 223mm / 200mm rotor they would be powerful, but I wasn’t sure what to anticipate in terms of feel. If you’ve ridden Shimano Saints, or the new XT XTR brakes, you likely noticed that they hit hard and have an on or off feel. On the contrary, SRAM’s Code brakes tend to modulate a bit better and deliver late power. Personally, I’d rate the DH-R EVO brakes somewhere in between the Shimano and SRAM offerings. They walk the line of power and modulation perfectly. The power doesn’t hit all at once – rather, once the pad is engaged, there is a progressive curve to its bite. It was a feel that I actually became quite partial to. As far as performance on long, sustained descents, the brakes have been quite good as well. While I no longer frequent white hot, steep terrain in Santa Cruz anymore, I do tend to have some longer descents where things continuously heat up and I never once have felt any fading or diminished performance. Personally I didn’t feel a massive difference between the two pad compounds, but like most other offerings I’m sure that they both work optimally within their intended conditions. Lastly, on the topic of rotors, I loved the insane amount of power on offer from the whopping 223mm up front and I’ll likely never run anything smaller on an e-bike ever again. The other thing I liked was that the rotors stayed truer after a couple of dings on rocks, and didn’t make any warbling sounds – both likely due to their increased thickness.

At the end of the day, if you’re in the market for a new set of gravity brakes and are inclined to stray from the run of the mill Shimano or SRAM offerings, it would be silly not to consider the DH-R EVO’s. I think there is a strong case that they have one of, if not the best “feels” on the market. In terms of the one main issue in this review, TRP’s response checks out and I feel that it is completely honest as well as realistic. Things happen and nothing is 100% perfect from any brand. On a personal note, back before these brakes hit the market for consumers, I also got a glowing endorsement of them from Brendog, who is a good friend and has always been a straight talker with me. There is no reason the anomaly laid out in this review should deter anyone from considering them. In my experience, the DH-R EVOs have been powerful and consistent under all circumstances, but what I like best about them is their feel. I won’t be taking them off of my bike any time soon.