The 2020 UCI DH World Cup came to a close today with race #2 in Lousã, Portugal, the fourth race of the year that marks the end of this anomalous season, which was disrupted and upset by the Covid-19 pandemic. The track, considerably more worn in the technical sections than in race #1, was slightly modified in a few parts while the ground remained in the same conditions as in the first race, mainly dry and with some wet and slippery areas, for the whole women’s race and for a good part of the men’s race, while for the last 25 athletes, a light rain unexpectedly began to pour on the upper part of the track, partially modifying the conditions compared to those encountered by the athletes who had previously descended. 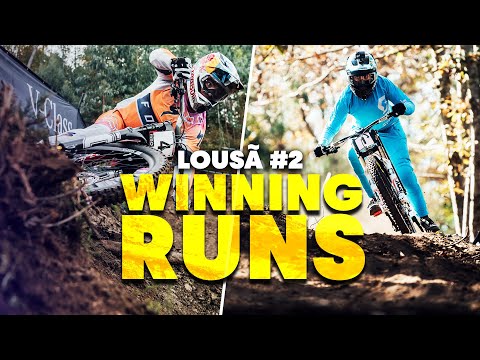 The top riders therefore had to put forth the best of their abilities to be able to assert themselves against the times set by the athletes who race in dry conditions, in a race that at the end turned into a wild ride of ups and downs. Loïc Bruni, last to go down, had an epic, aggressive run and literally at 110%, effort going on to win his first race this season and climbing to second place in the overall. 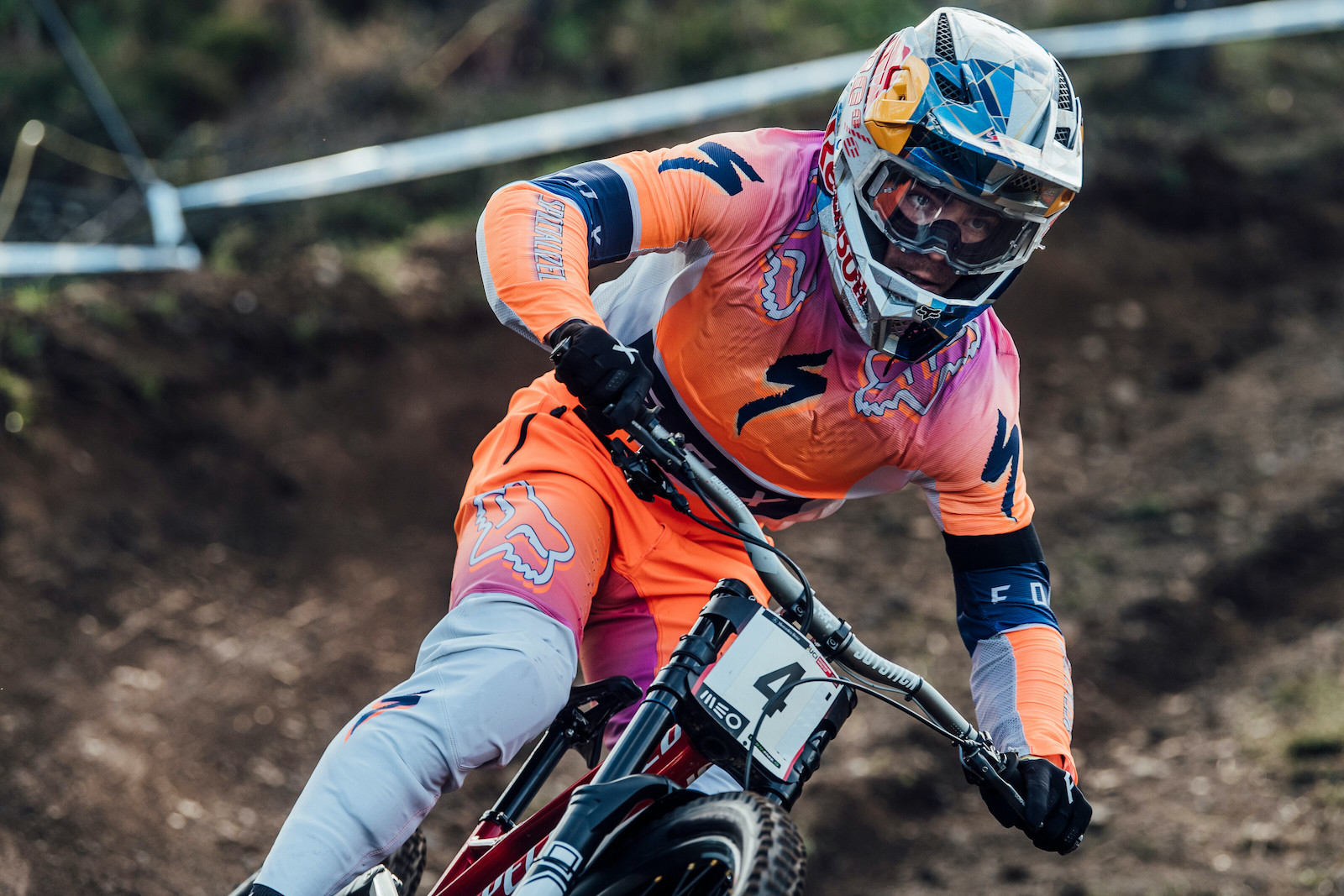 Unquestionably masterful DH veteran Greg Minnaar – flawless, fast, clean and smooth as only he knows how to be, thrilled the audience by finishing in second position just .17 from Bruni, thus almost repeating the win from race #1. The GOAT closed out in third place in the overall classification, an excellent result for an athlete who turns 39 this month. 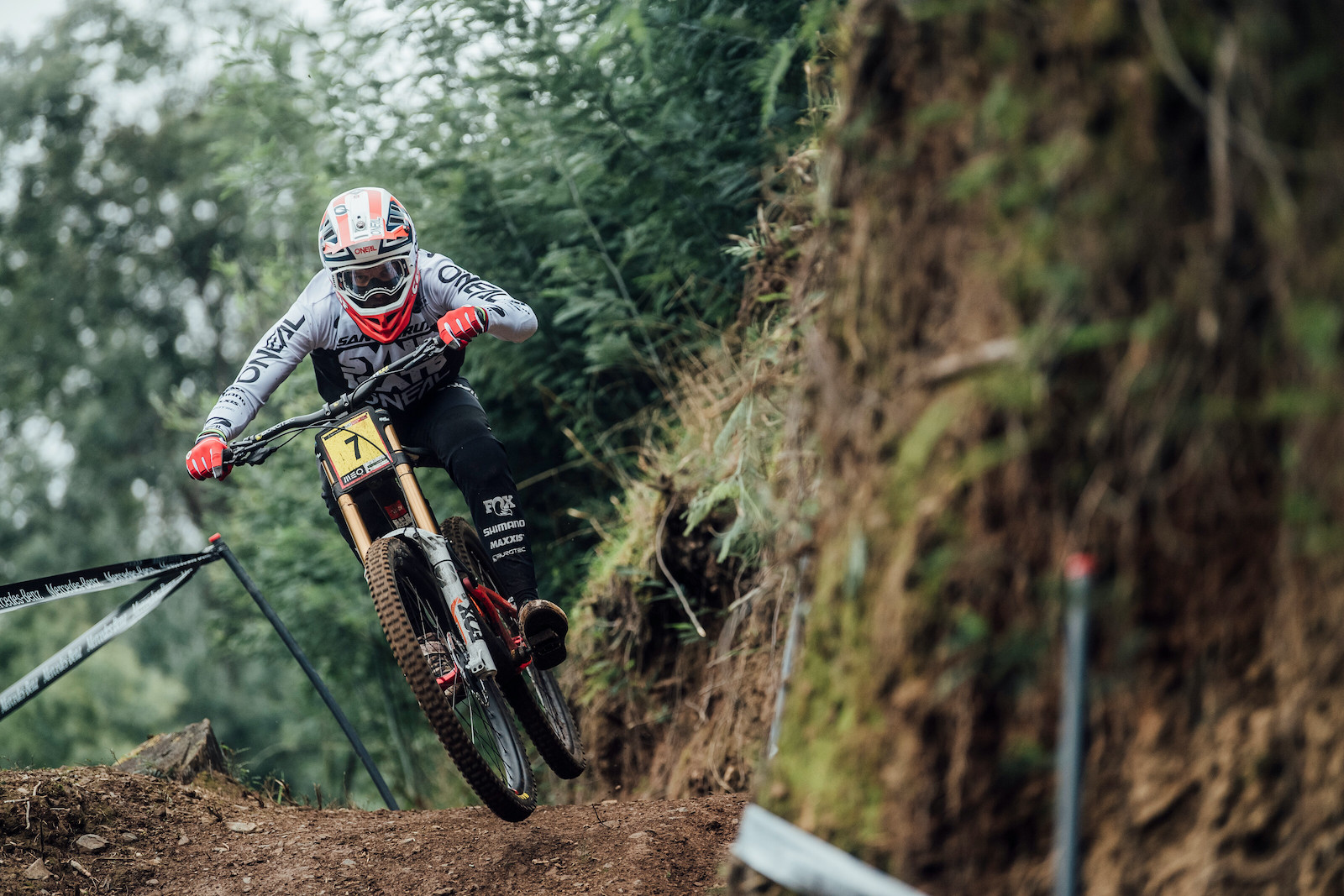 An incredible performance from Matt Walker, the first to get into the hot seat after the rain, who had a super aggressive and constantly progressing descent. Seeing his split times in green, awakened the interest of the viewers, now resigned to a race in changing conditions. This season saw him consistently at the top of the standings, despite never having won a race, thus giving him the title of the UCI DH World Cup 2021 season. 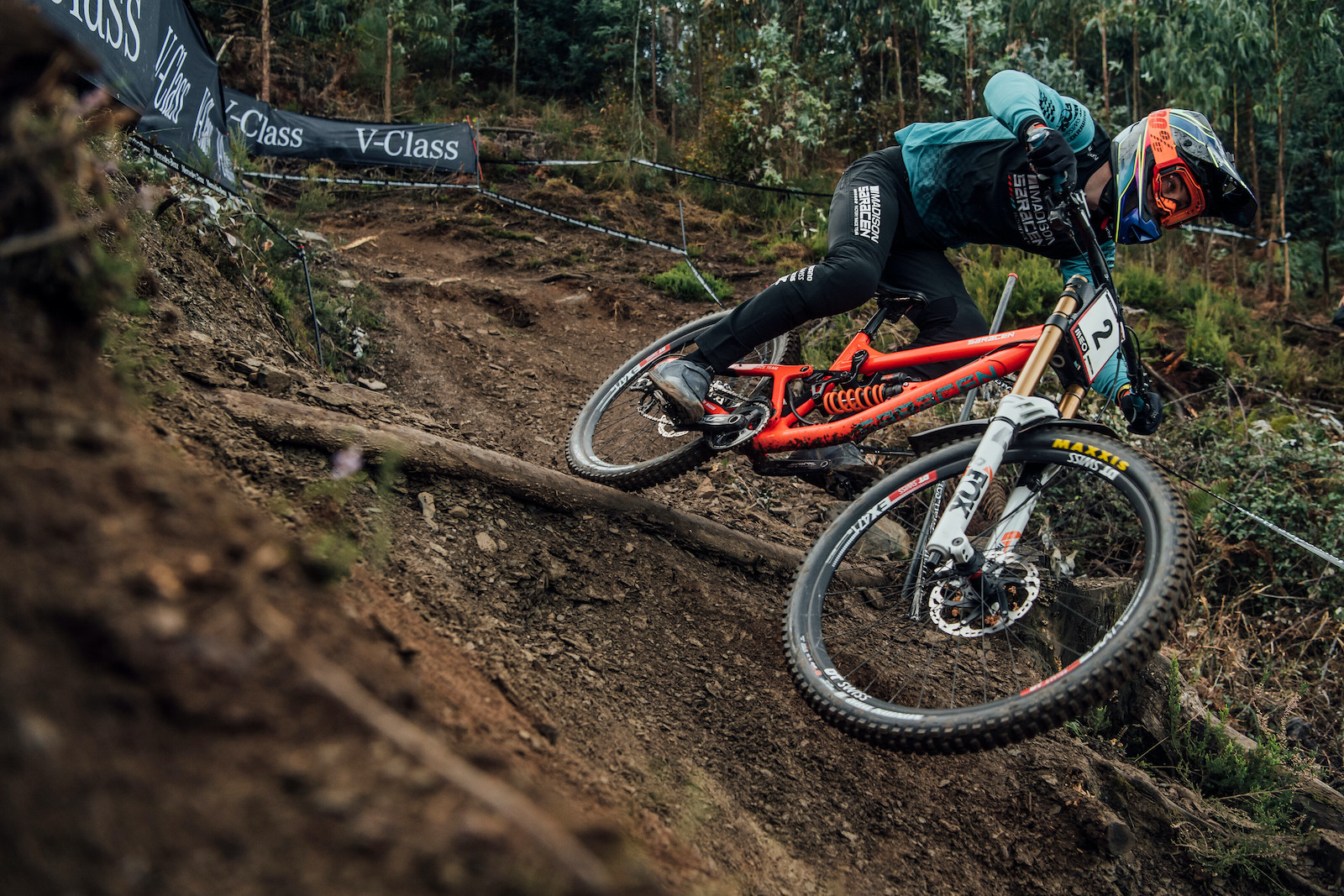 Fourth place for Jamie Edmonson, the athlete who laid down the fastest time in the dry and continued to occupy the hot seat until the arrival of Matt Walker. 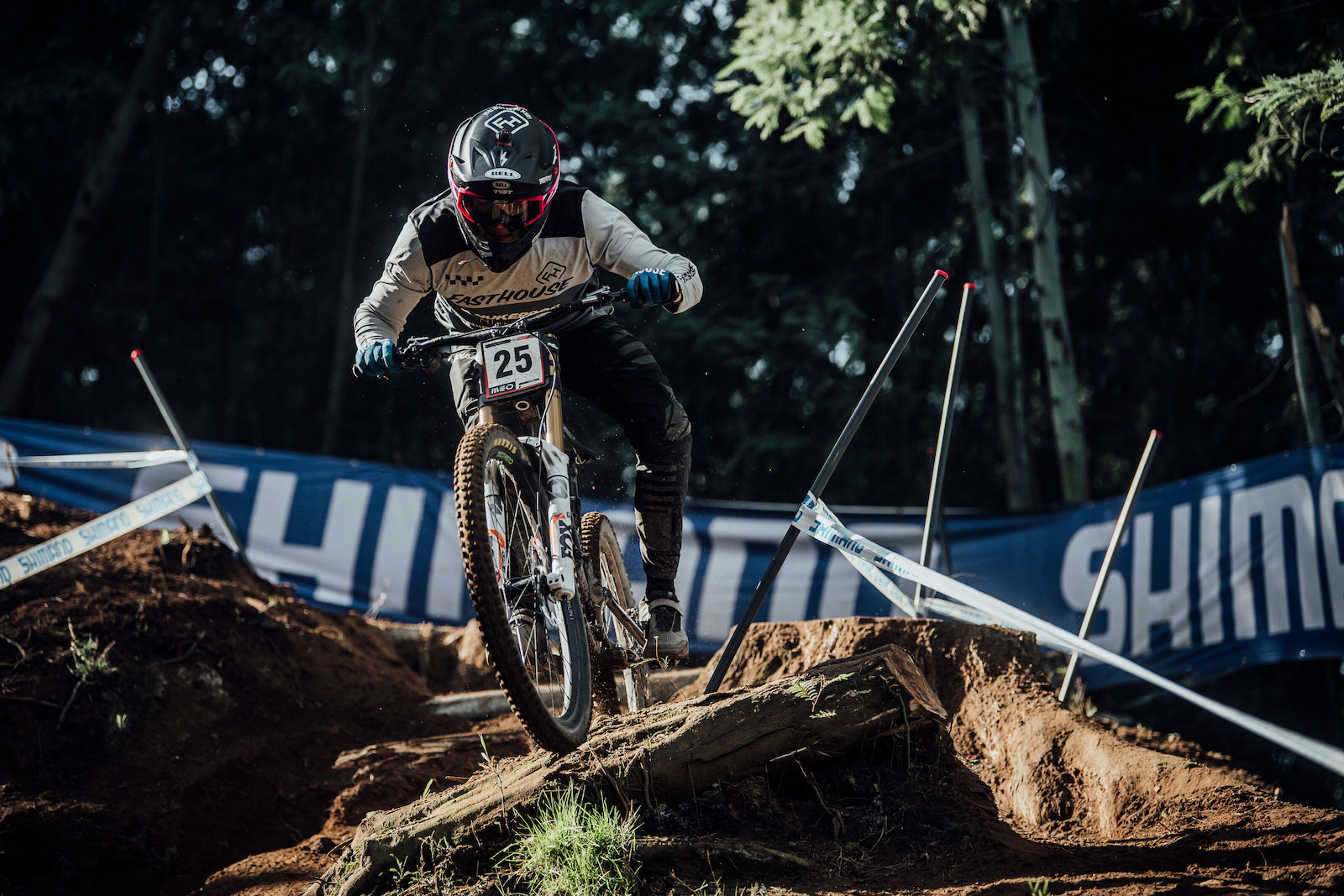 Fifth position, in the same conditions as Edmonson, for Philip Atwill. 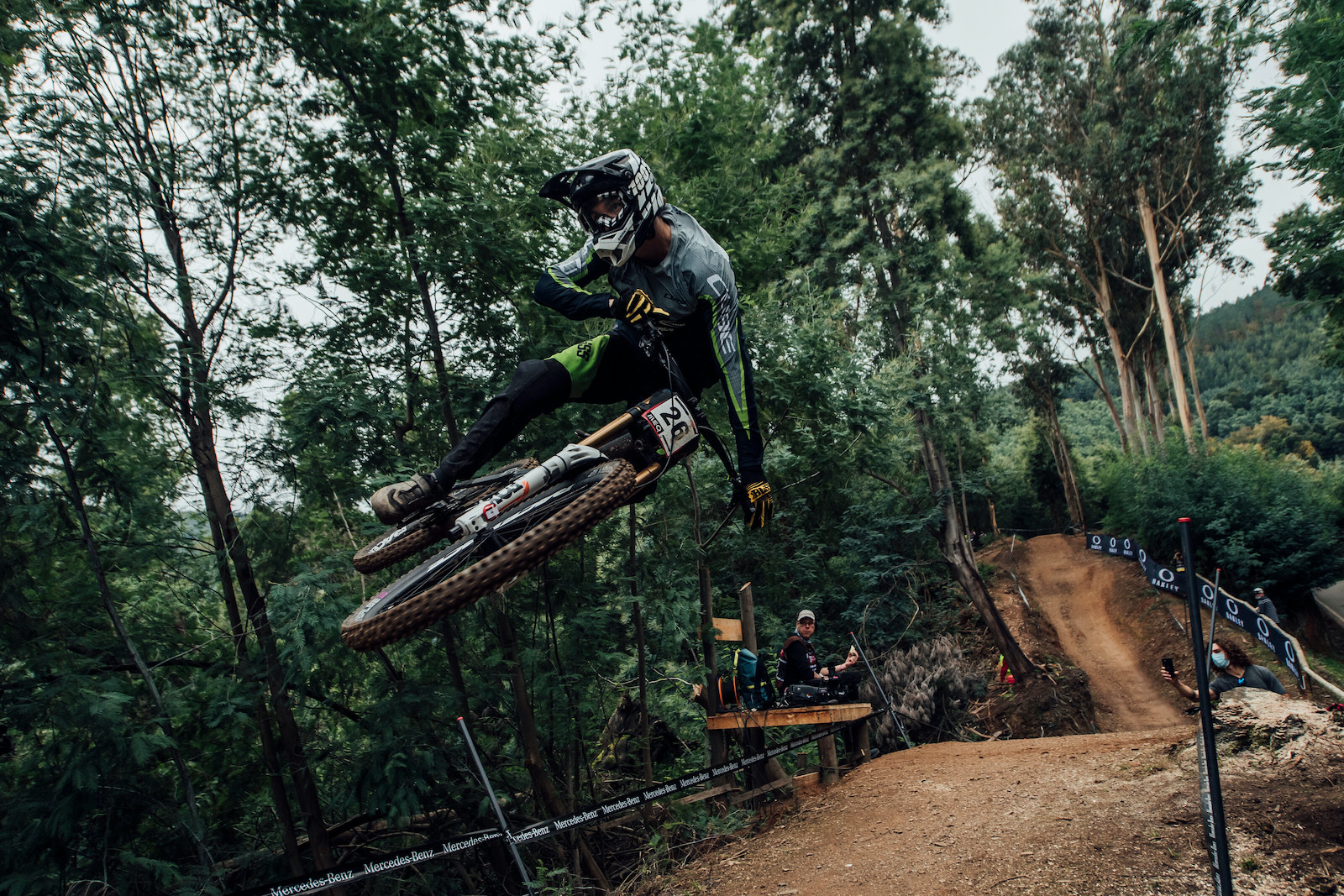 Also worth mentioning is the excellent sixth place for Troy Brosnan, the first to seriously worry Edmonson and effectively fourth of the athletes who went down after the rain. The Australian made a descent of pure speed and spectacle, always in attack mode and absolutely determined to get on the podium. 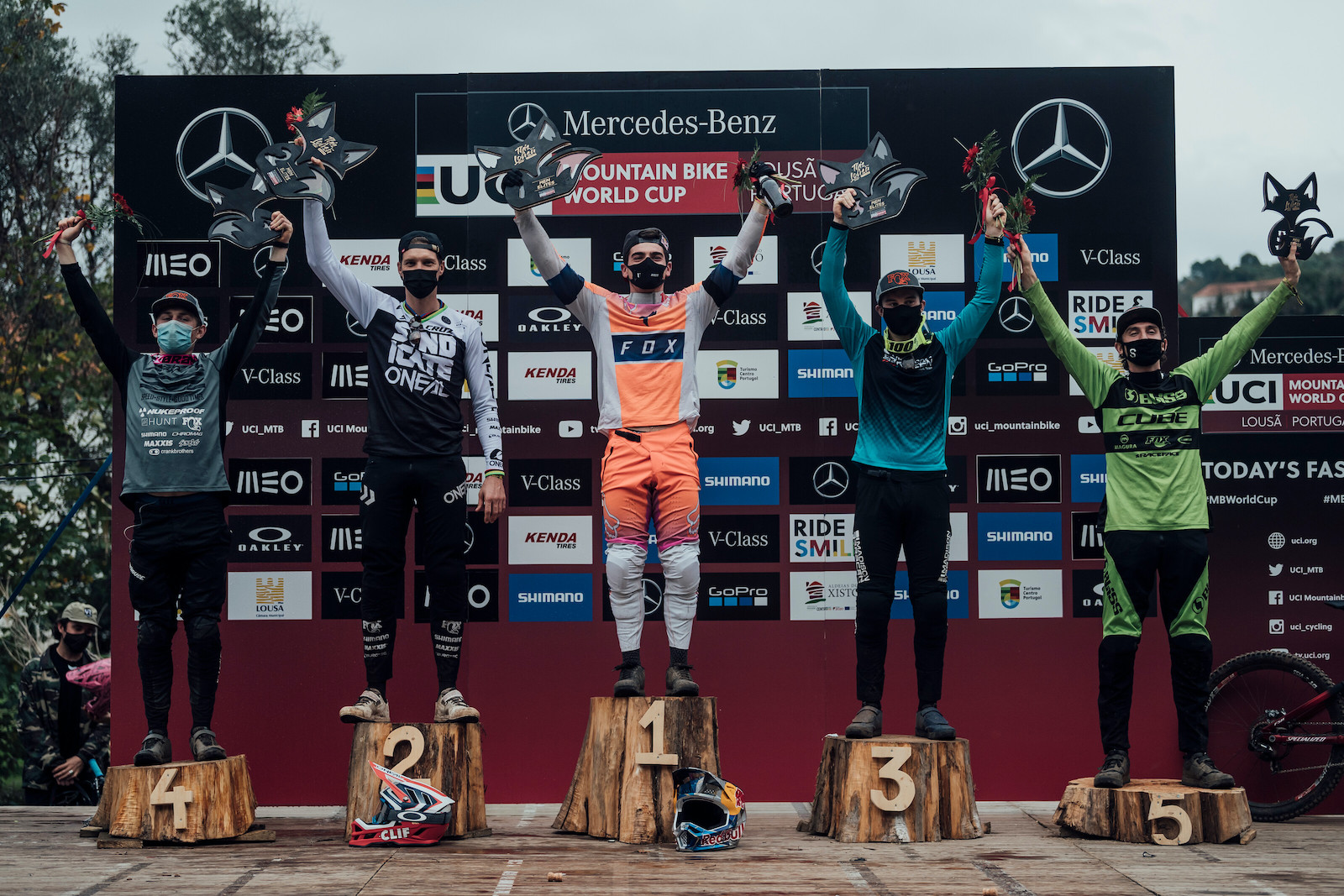 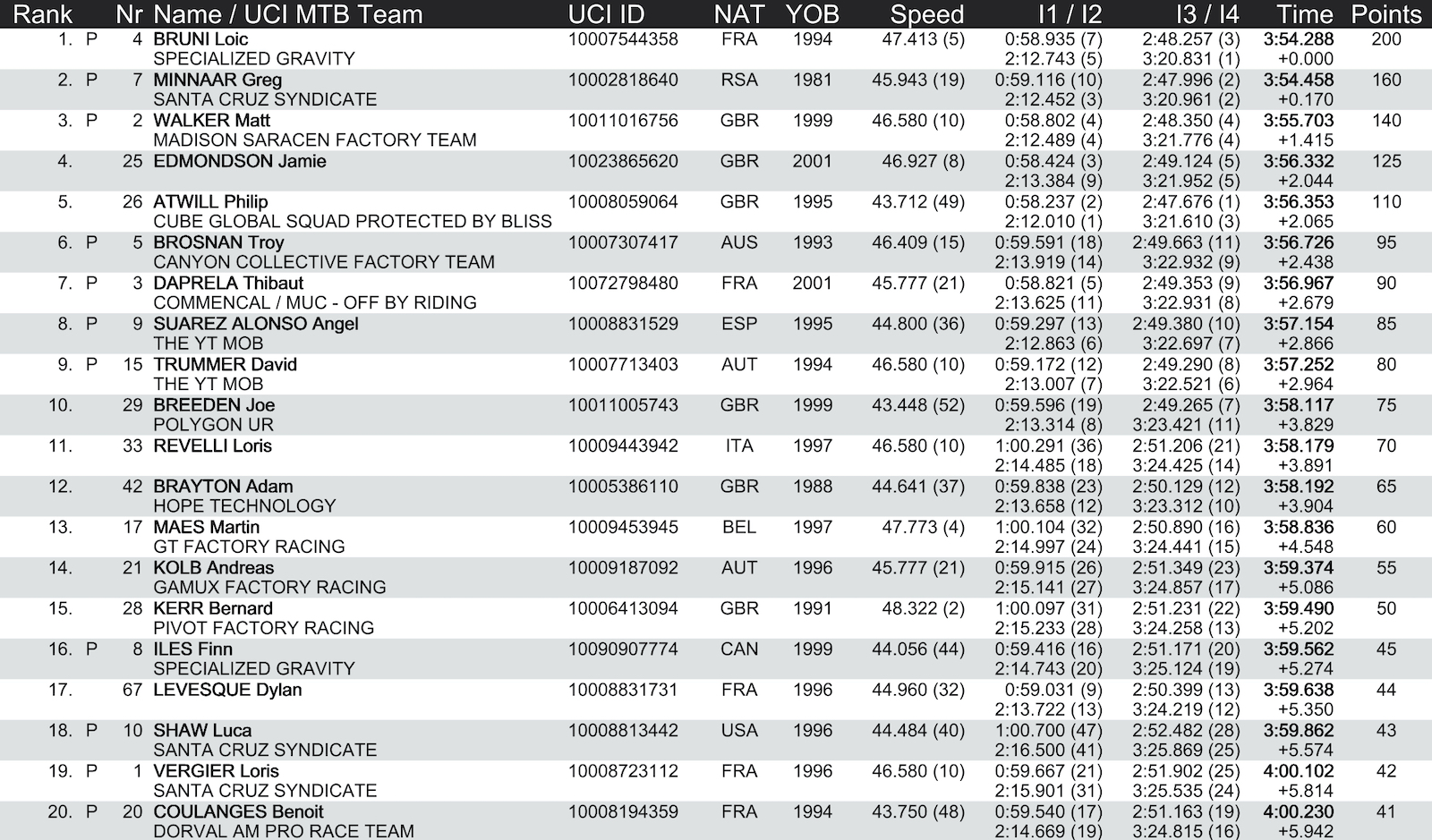 Marine Cabirou gave it her all, setting the best time among the women that led her to the stage and overall win, with a run in which she showed full determination on the entire track, in search of this well-deserved season win. 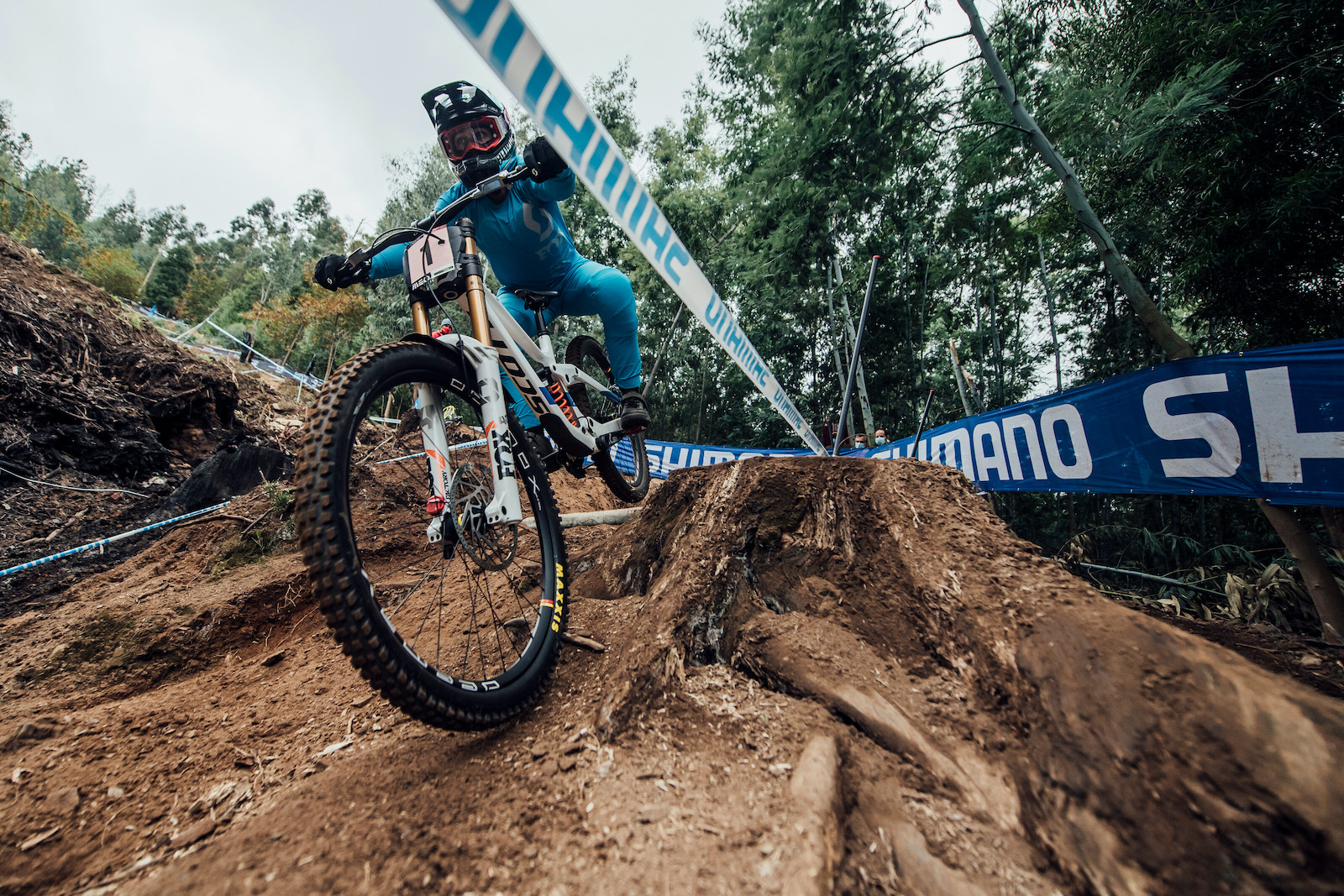 It was looking like a title win for Myriam Nicole, the leader of the overall until this morning. She seems to have suffered from yesterday’s crash in qualifying, getting down the track smoothly, but with a conservative style compared to her standard, which put her in fourth place in the Lousã’s second race, ranking her second in the general classification. 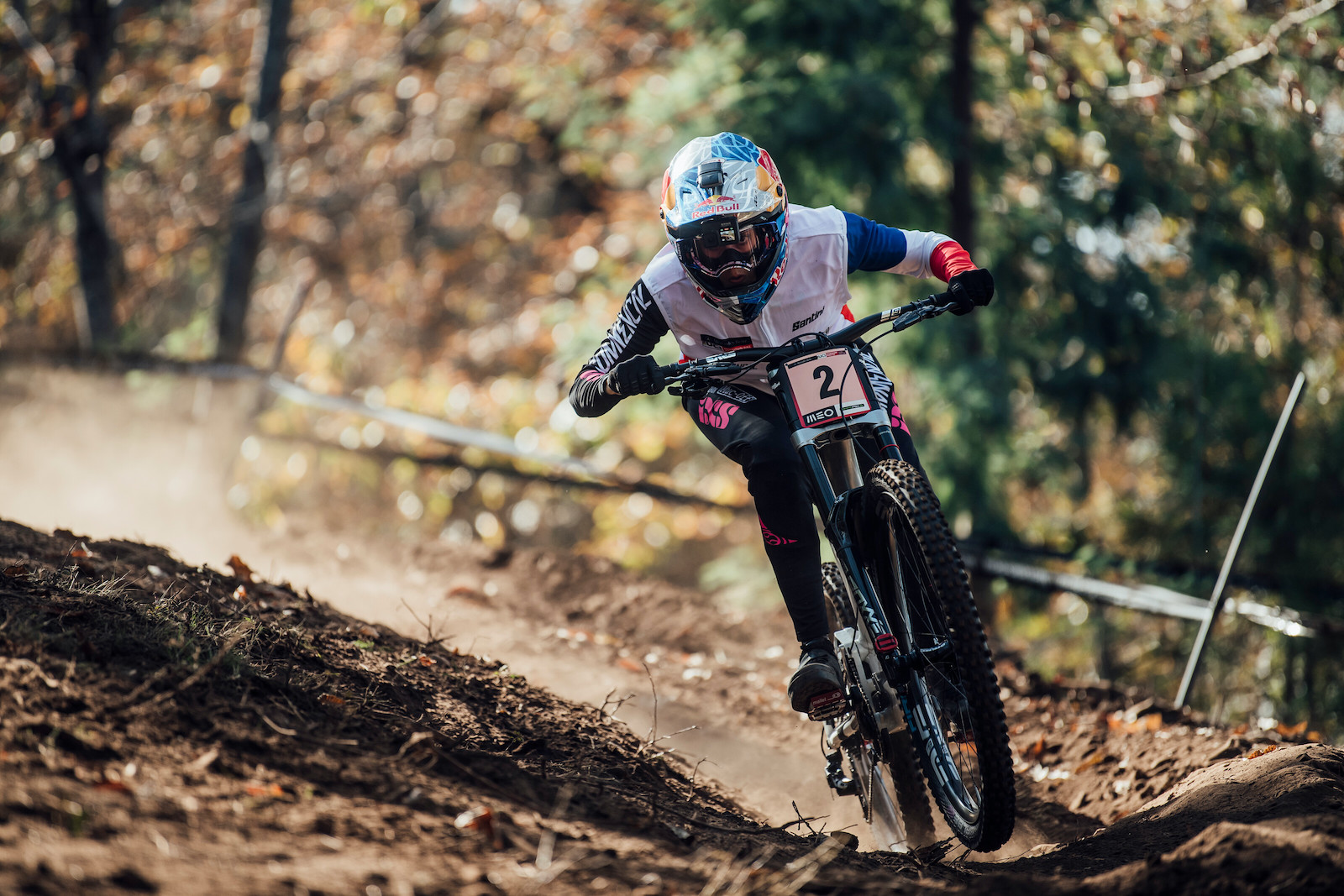 On the other hand, Nina Hoffmann laid down an excellent performance, after winning race #2 in Maribor, and today she closed with a solid second place at 1 second and 7 tenths from the best time in the classification, landing on the third step of the overall podium. Third place for Tahnée Seagrave, winner of yesterday’s qualifying round, who climbs to fifth place in the circuit classification. To seal the podium, fifth position for Slovenian Monika Hrastnik. 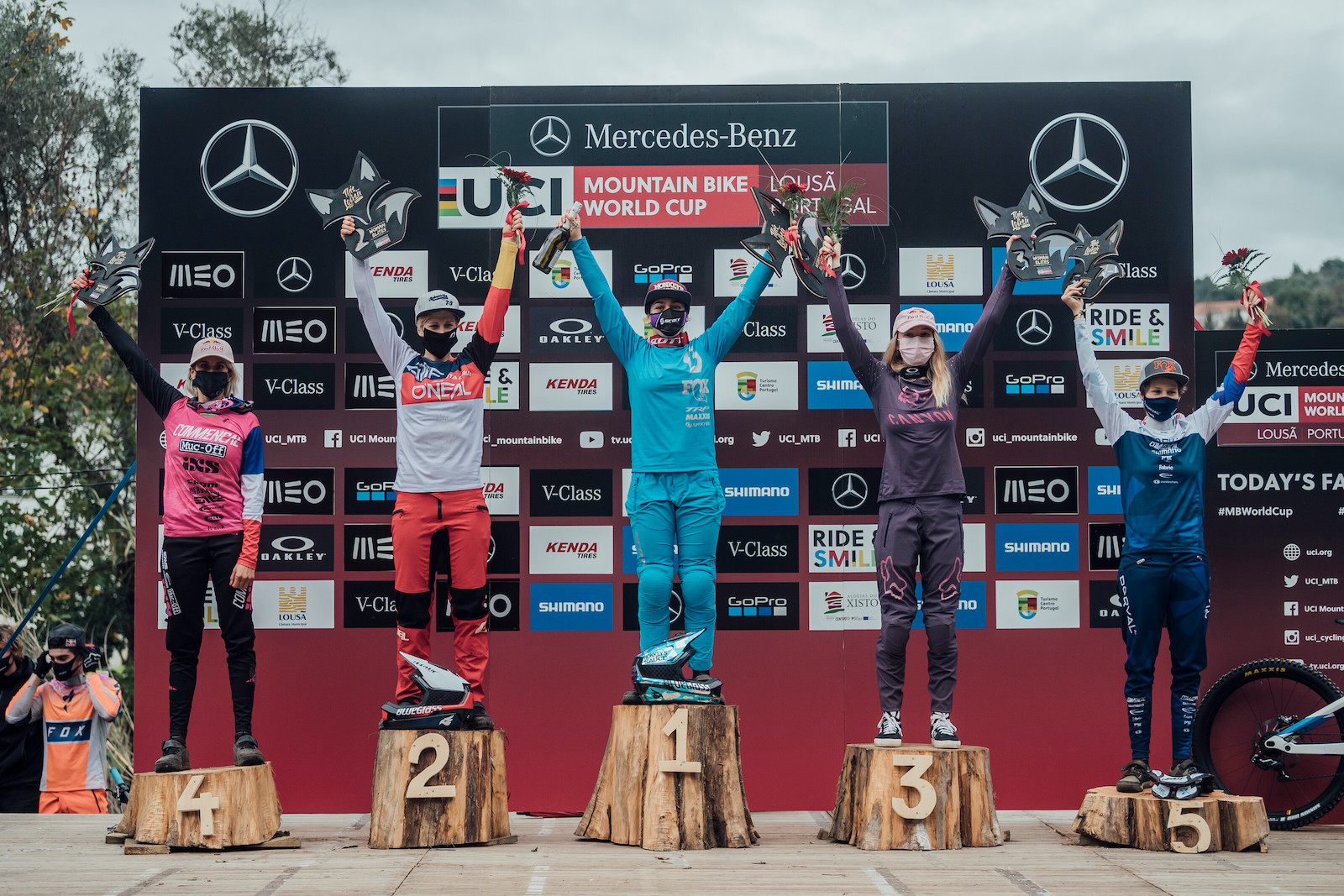 Tracey Hannah, who finished her long career as a DH athlete with today’s race, finishing her run with a crash, finishing in eighth place. A similar fate for Eleonora Farina who, after yesterday’s puncture in qualifying, has to surrender to a fall, finishing in 9th place that certainly does not mark her merit after the fourth place in race #1 and the third and fourth place of the two previous stages in Maribor.

In the men’s Junior category Dante Silva wins the final, ahead of Goncalo Bandeira and Ethan Craik. The latter, thanks to the consistency of results, although he has won only one stage, takes the victory in the overall, ousting Oisin O’Callaghan, world champion and winner of the first two races of Maribor, who here in Lousā finished out of a top position in both races. In the female Junior category it is the winner of the qualifying heat, Lauryne Chappaz, who won the final, without however being able to upset Leona Pierrini, world champion and winner of all the other stages, although today she finished in fourth place.

The UCI DH World Cup returns to the field, barring new complications related to Covid, in Maribor next April with the first stage of the 2021 calendar:

Val di Sole will host the UCI MTB World Championships from 24 to 29 August.