WTB recently updated parts of their mountain bike tire lineup and shortly after doing so, sent out samples for testing. Naturally a set ended up on my bike…The story is two fold – first, their light duty casing became a bit more robust while losing a snippet of weight. Secondly, some of their tread patterns – as it pertains to this review, just the Verdict – have been fine tuned as well. For better or worse, there have been no updates to the compounds, but more on that later. Read on for the full scoop… 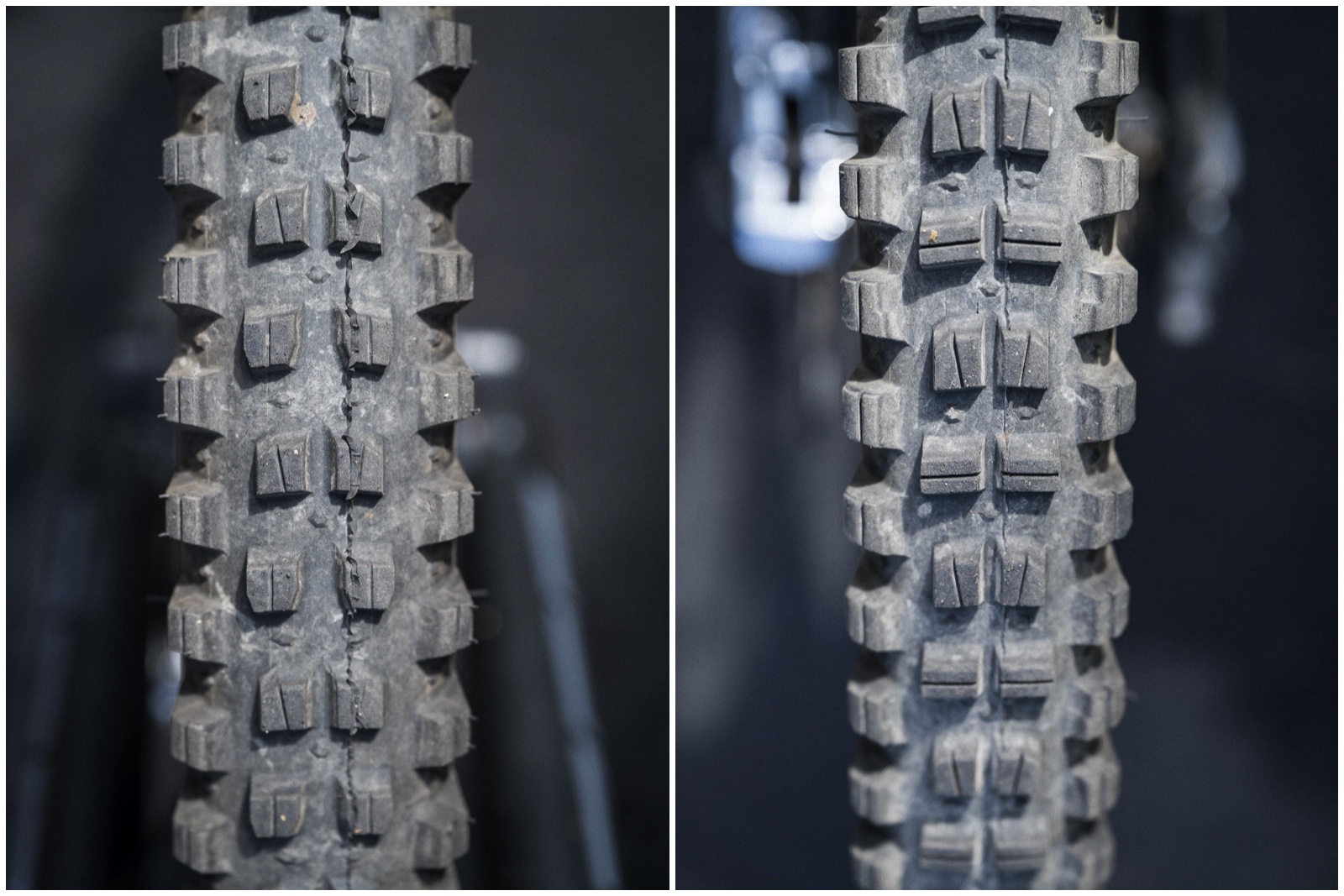 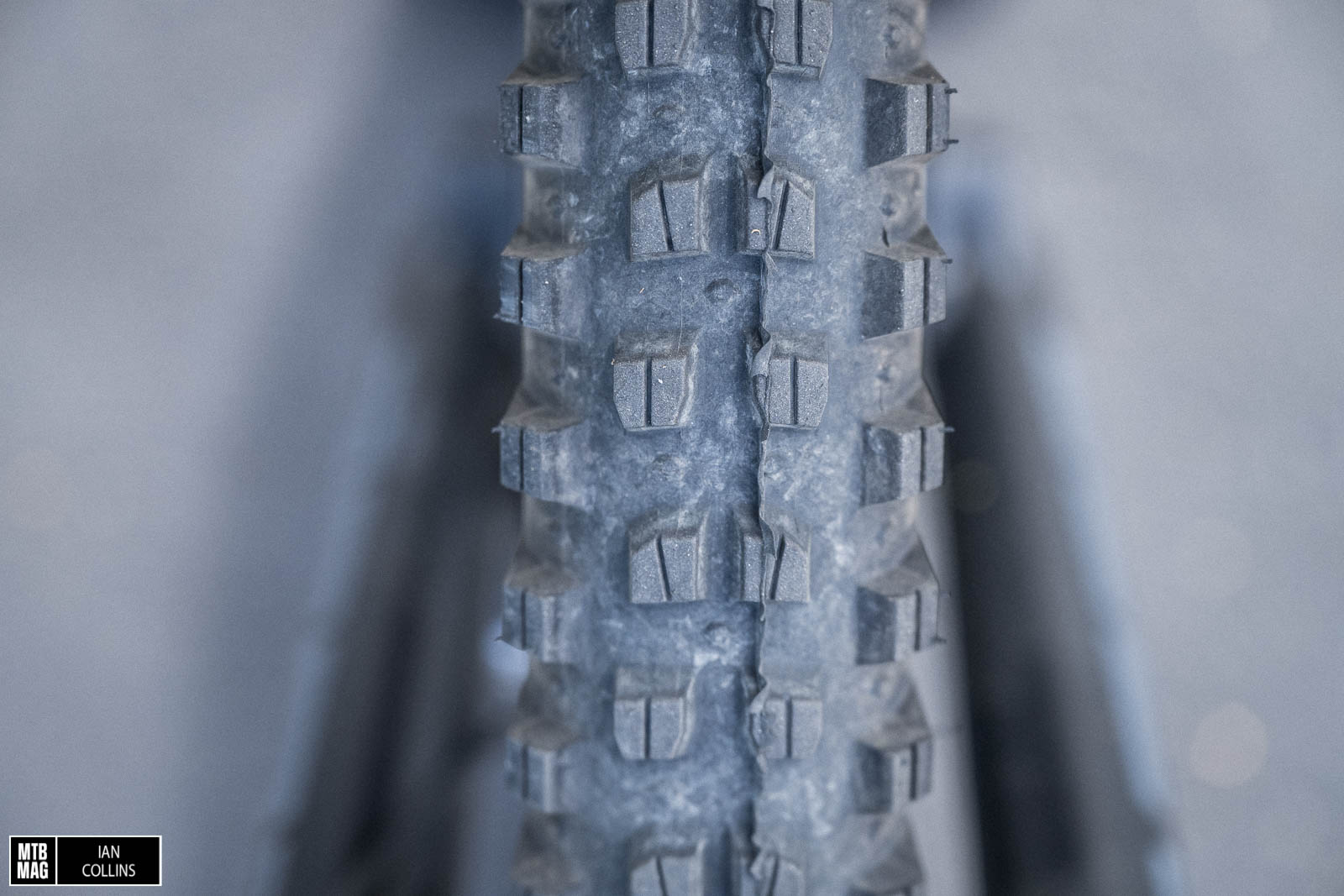 The Verdict has taller , widely spaced knobs for plenty of bite and a high resistance to packing up with mud and dirt. It’s not a mud tire per se, but rather a tire aimed at loose conditions – wet or dry – and it’s intended to be used up front, although I think it could work well out back if conditions are asking for more bite. 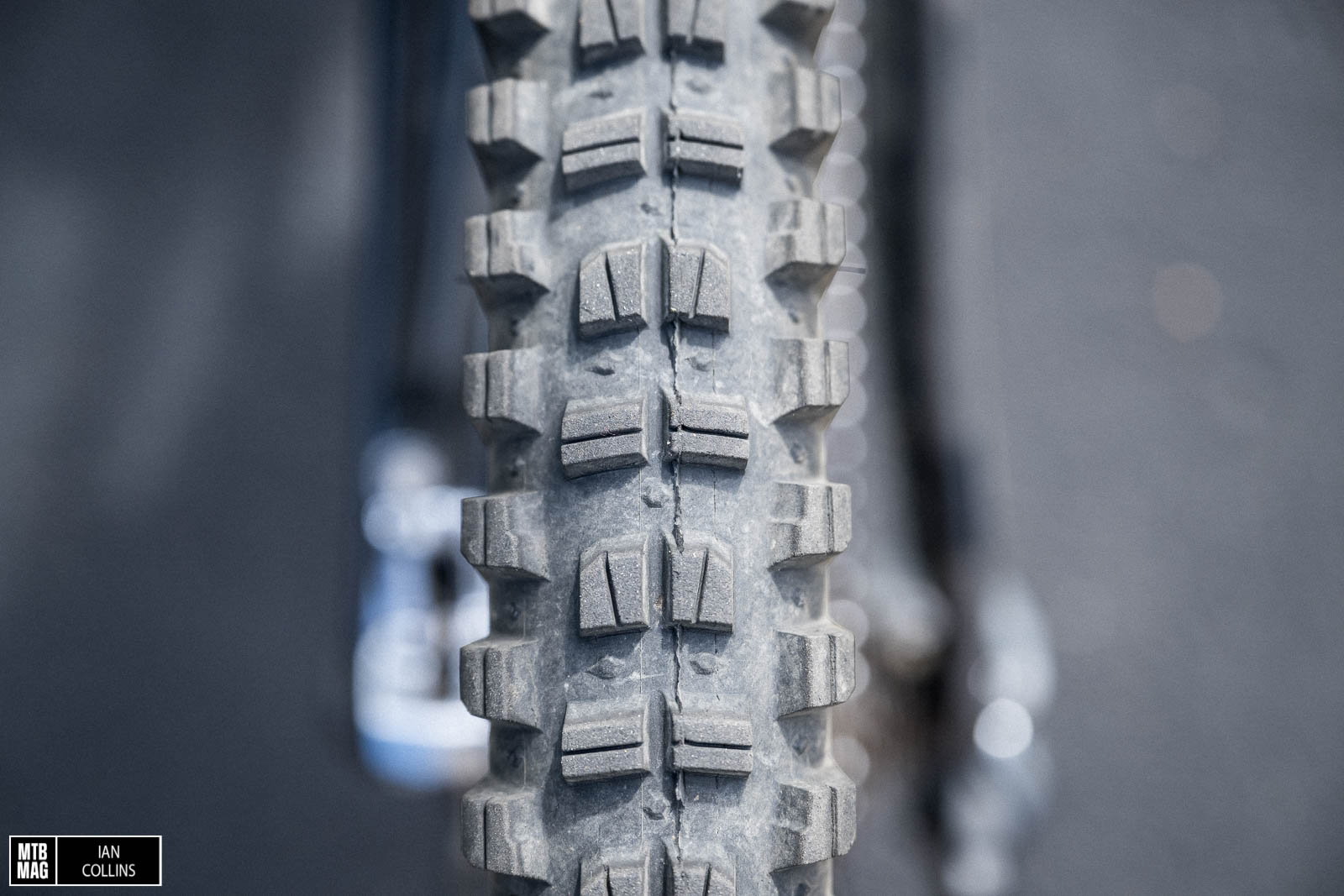 The Judge is “rear focused” as WTB puts it, although it can also be used up front – think bike park. It’s quite a bit faster rolling than the Verdict and is thus is aimed at firmer terrain compared to the Verdict. The wide set of center knobs every other row lend toward strong braking power, which is further boosted by their horizontal sipes. The tire also features well supported corner knobs for solid support in the corners. 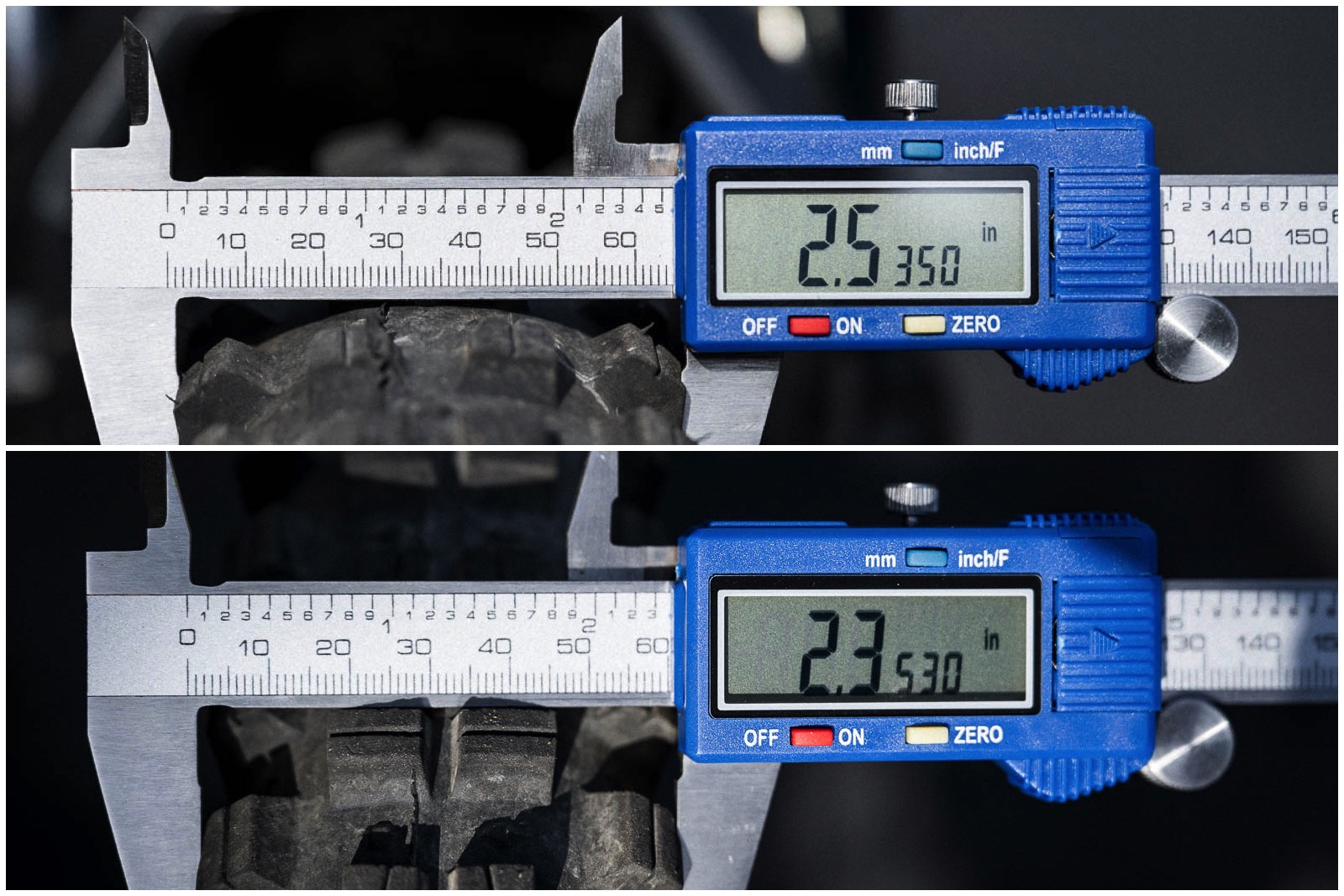 At 2.5″ and 2.4″, the sizing came in reasonably accurate on 30mm internal width rims…As for profile, both tires weren’t super square nor were they overly rounded. Rather, they both had a nice comfortable shape that gave them very balanced handling. 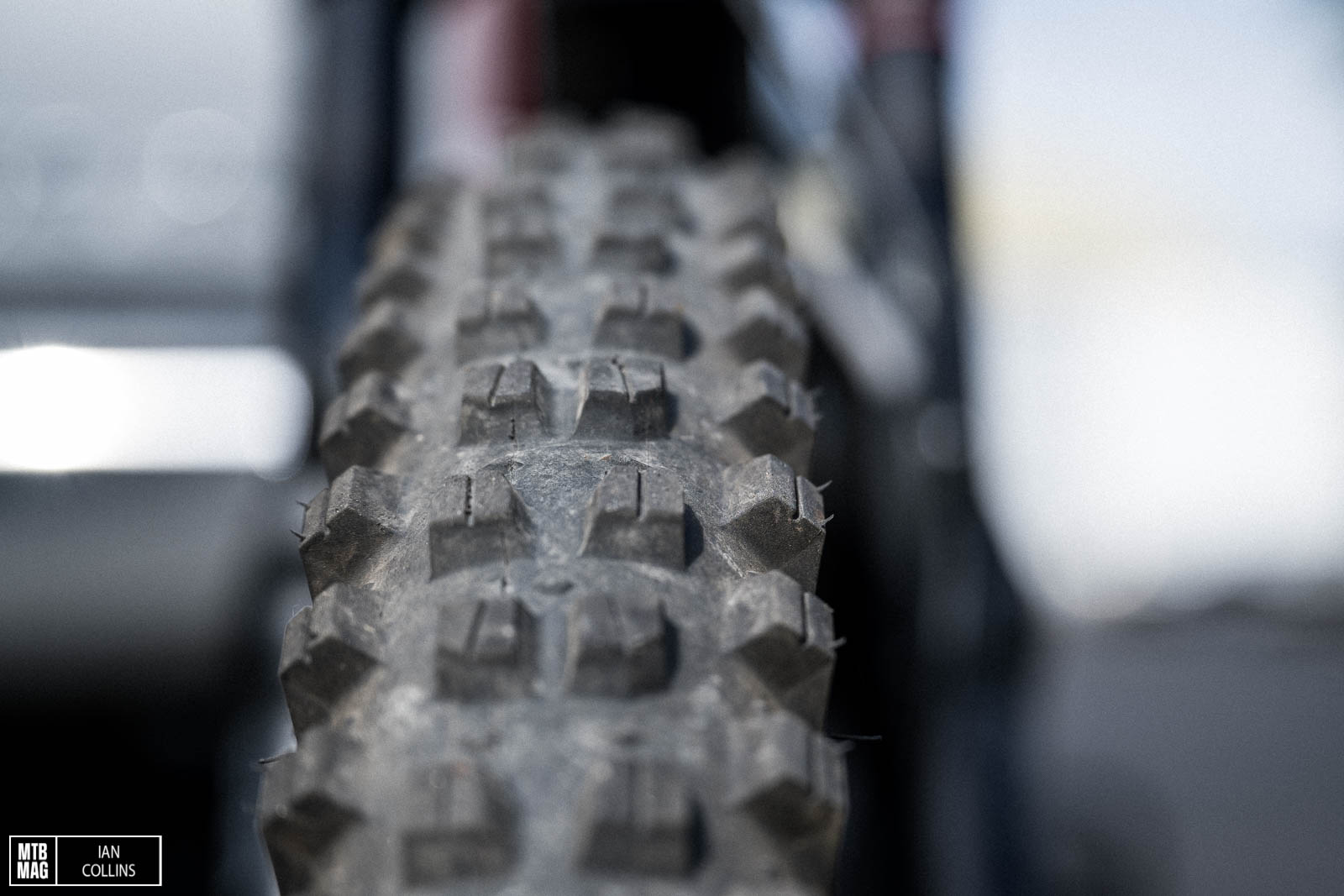 In this latest iteration, WTB has done quite a bit of fine tuning but it might be hard to notice with the untrained eye. First, the side knobs picked up some additional support and a shallower sipe, which should make for a bit less squirm on firm terrain, offering up a more balanced all around ride. Additionally, they tightened up the gap between the center and side knobs to make for a more seamless transition when leaning hard into turns. 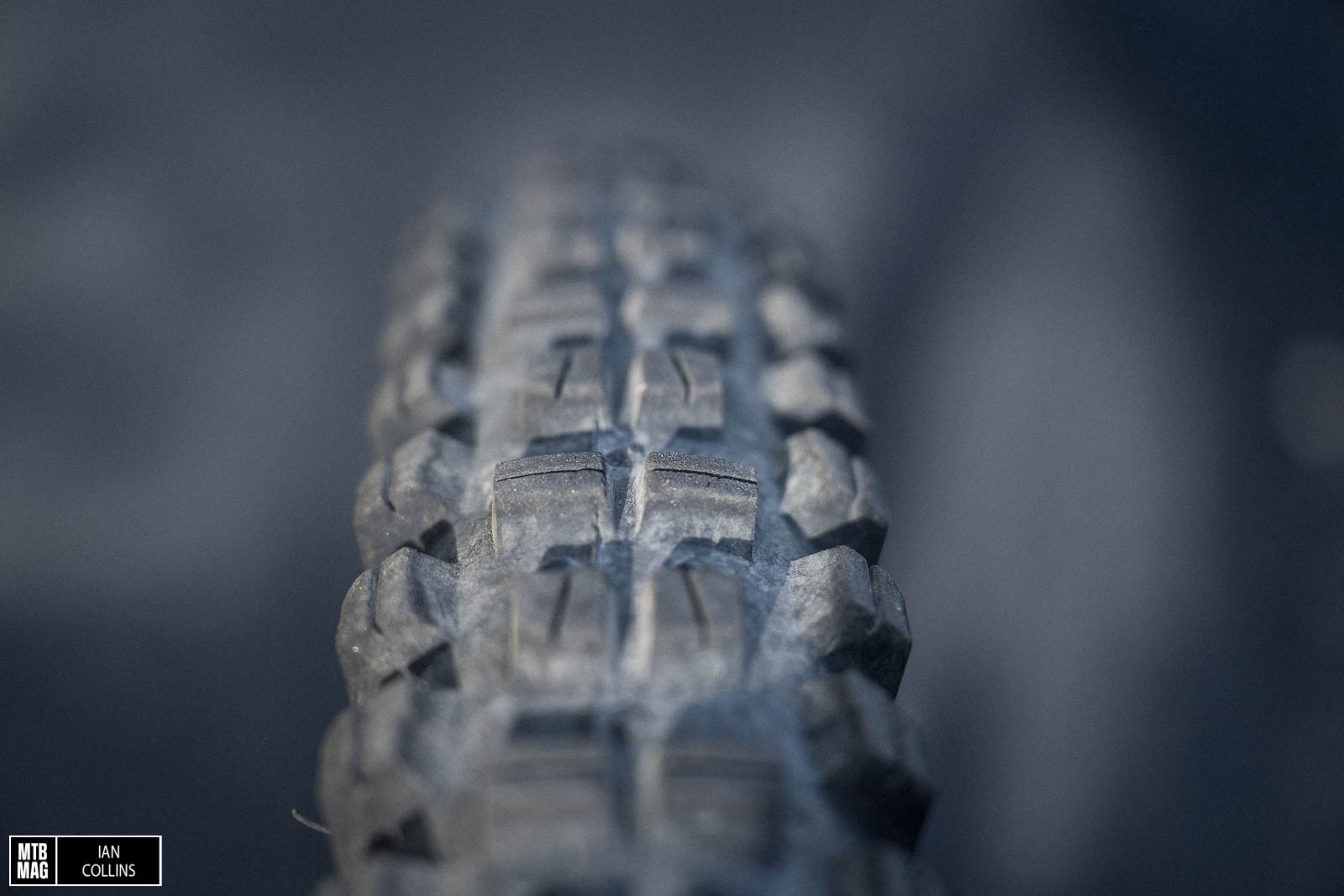 The Judge has not received an update as regards knob profile. It also is only available in the thicker “Tough” casing – which is comprised of two 60 TPI layers – whereas the Verdict is offered in both the “Light” and “Tough” casing, with the former picking up additional protection against flats via the newly formulated “SG2” layer.

I’ve been riding this combination beginning with a wet Spring, then into nice hardpacked late Spring conditions and now well into loose, blown out Summer dirt. Starting up front, compared to the last Verdict that I tested, I did notice a perceptible difference in its manners which can clearly be credited to the updates it has received. The last version was substantially less well rounded and got a bit squirrelly on anything other than loamy, loose or muddy conditions. As most tracks are a mix of firm and loose, I think it was a wise move on WTB’s part to make this tire a bit more versatile. Right away, I noticed the Verdict’s side knobs had less of a tendency to fold over and break free in hard pack turns and berms. The moments between riding upright and really leaning into a corner had less of a vague or uneasy feeling, which helped to inspire confidence in those transitions as they became an afterthought. As for the casing, I didn’t have any issues with the last version, nor have I had any issues with this updated version…It seems robust and up to the task, but if I claimed I could tell a difference compared to its predecessor I’d be lying. 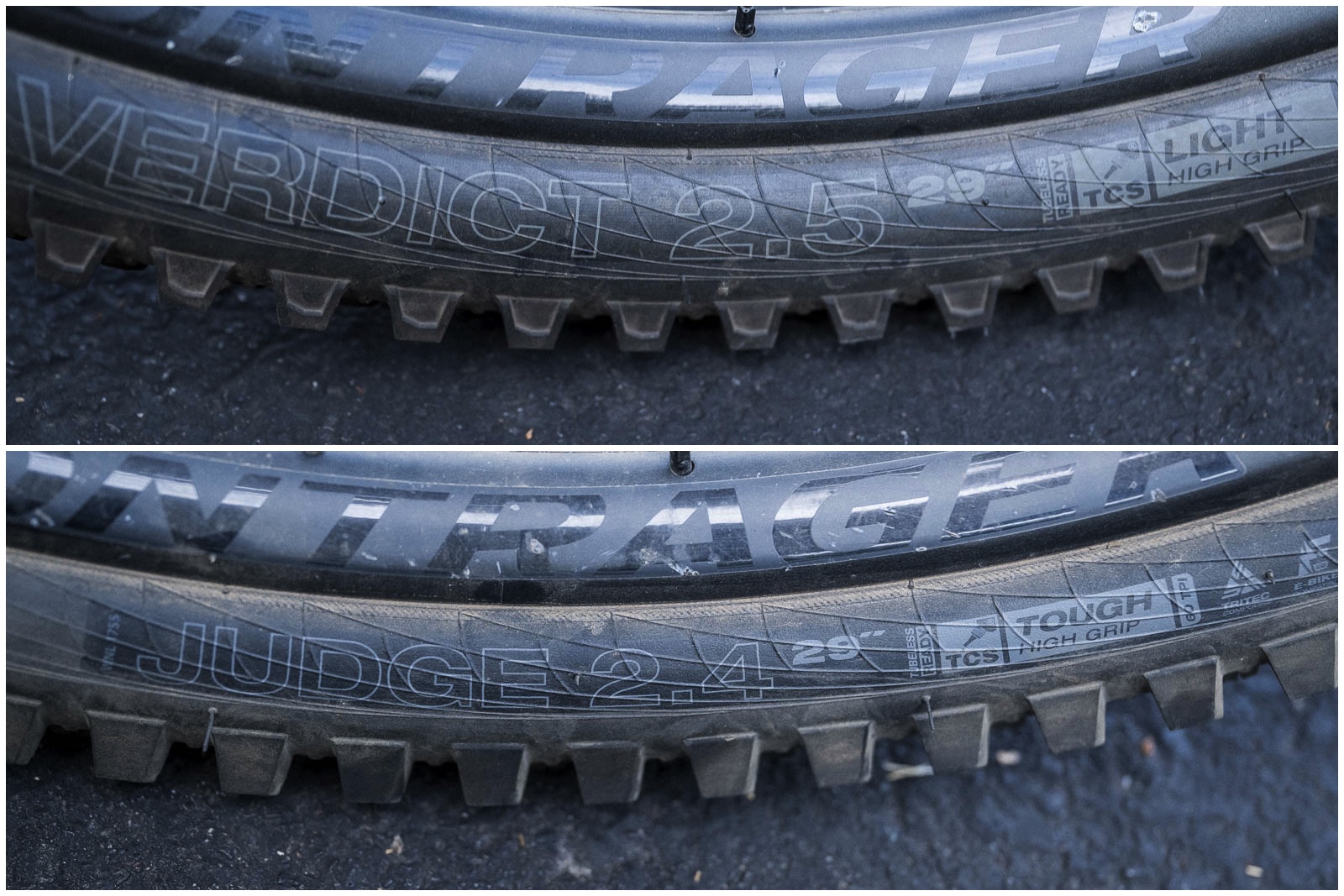 As for the Judge, I found it to be a great all around rear tire. It’s reminiscent of a Big Betty, a DHR2 and a few other tires that have a similar look and knob layout. As such, it performed much like those tires – offering plenty of braking power and serious support from its the knobs when you put the hammer down and lay into turns. It also rolled fairly fast given how burly its knobs are…unsurprisingly it is right at home out back. As far as the casing is concerned, I had no issues with the “Tough” casing that the Judge is solely offered in. What left me scratching my head however, is that this tire weighed exactly the same – down to the gram – as the Verdict (which has a thinner casing) on my scale. I can physically feel that it is substantially thicker, so perhaps the additional volume and rubber on the Verdict adds in that much extra weight. In any case, no flats plenty of sidewall support – even at mid 20 PSI range pressures – and no complaints from me.

The one thing I haven’t touched on yet is rubber compound. I do think that both tires have a good compound that wore well, wasn’t eager to let knobs tear and gripped fairly nicely. However, a common complaint that I make about most tires that I test is that there just isn’t enough of a slow rebound/damping element to the rubber itself. I do have that same issue with the Verdict and Judge unfortunately. Compared to some tires that have a slow element to their rubber – Michelin and Schwalbe come to mind – the Tritec compound doesn’t feel quite as calm and collected when you push hard and you’re hanging it out – right on the edge of breaking traction.

All in all, I’ve found that the Verdict is substantially more well rounded due to its updates, without giving up any noticeable bite in wet or loose conditions. It remains an excellent all around front tire that favors loose and wet conditions. As for the Judge, I’d add it into the mix with other solid consistent performers as a rear tires on the market. It leaves nothing to complain about as regards tread pattern, casing and inevitably performance. For most riders, 95% of the time they’ll be quite happy with the rubber compound as it stands, but I’m confident that if WTB adds a bit of a slow to the mix in their next revision, their customers will be even more satisfied – especially those who push things a bit harder. This is precisely what Specialized did with the new T9 compound and it worked a treat. Overall, the Verdict and Judge are still both great tires and work very nicely in unison on a broad mix of terrain.