After months of spyshots and previews Canyon unveils the new Lux…A full suspension bike designed for cross country. Already used in recent months by Alban Lakata, Mathieu van der Paul and Pauline Ferrand-Prevot, the Lux has 100mm of rear and front travel, an all-carbon frame that can accommodate two water bottles and a new suspension system with a kinematics that Canyon defines as “triple phase”: sensitive at the beginning of the race, supportive in the middle and progressive towards the end, just like the latest bikes presented by the German brand such as the Sender and the Spectral. Speaking of rear suspension, Canyon relinquishes the axle on the seatstays and uses the properties of carbon responsible for the movement of the in the rear end around the rear axle. The brake caliper is located on the chainstay, so as to leave the seatstay free to flex and work. 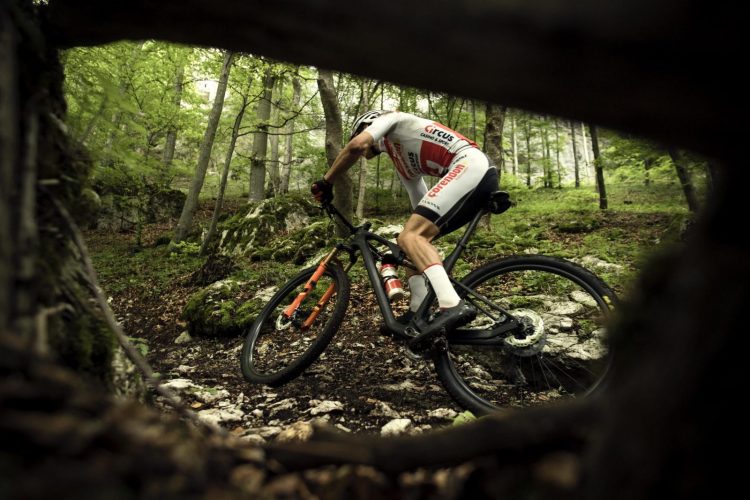 The linkage between the front and rear triangle is smaller than the previous model, as it is subject to less stress than in the past, and it is now made from aluminum with a steel bridge connecting it. Weight savings amounted to 144 grams. The levrage ratio has come down, thanks to the 210x55mm metric shock absorber. As far as we know, this is the lowest leverage rate bike on the market. The new Lux is designed for single chainrings only, which allowed engineers to use a wider bottom bracket and a straighter driveside chainstay, increasing rigidity. Focusing on larger rings (34-36 teeth), it was possible to raise the value of antisquat, an important factor when climbing or hammering in the saddle. The geometry is practically identical to that of Exceed : the head tube angle of the Lux is 0.5 ° steeper than that of the hardtail because it takes into account the sag. This is to make the transition from one bike to another as simple as possible, since many serious XC racers tend to use a full suspension or a hardtail depending on the track that they’re racing on. 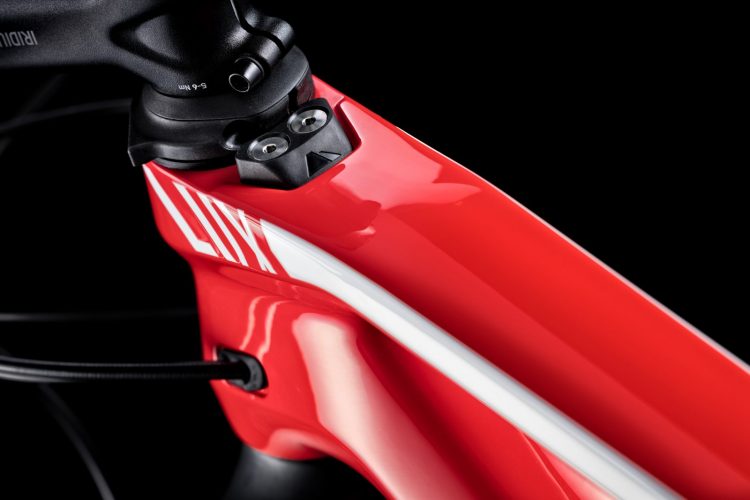 Below is a summary of the key features. 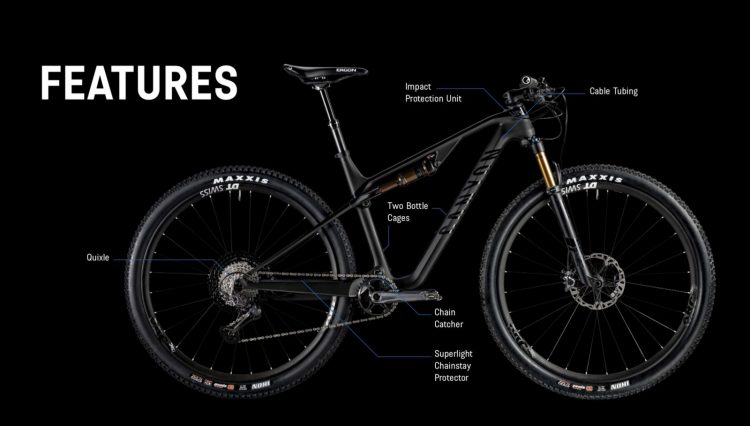 The minimalist chain guide in detail: 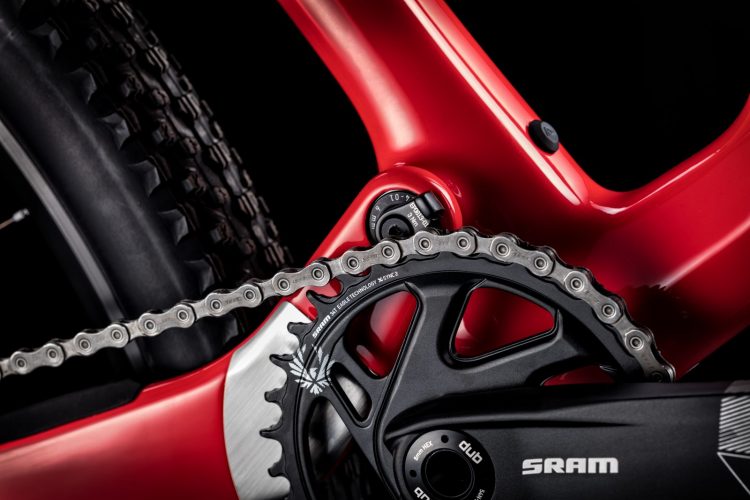 The cable routing is internal, and very stealthy. It’s easy to route them thanks to the guides inside the frame that accompany them from one end to the other. 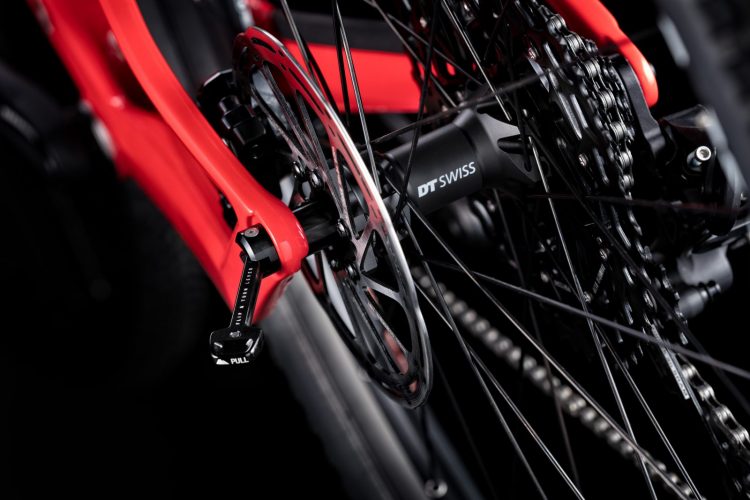 The rear axle lever is retractable and is stashed in the axle itself.

Below are the models offered by Canyon. Prices are on their website, from which you can also buy the bike directly. 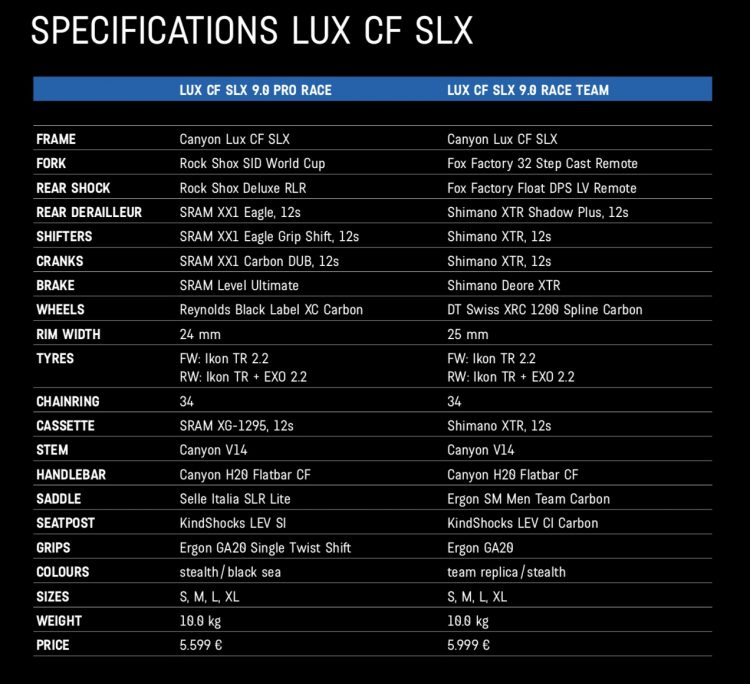 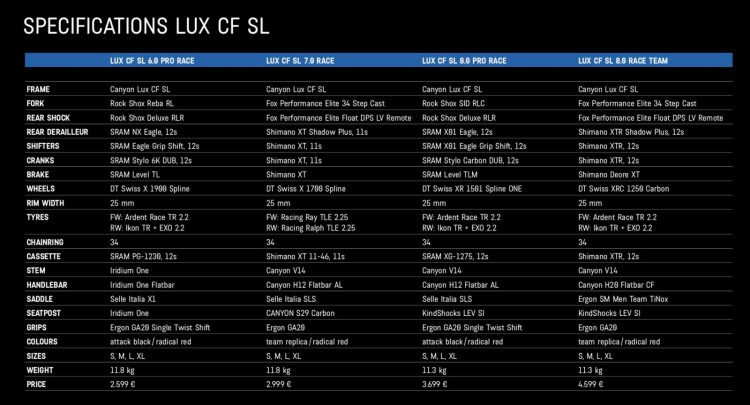