Coming into the riding season this year, I wanted to build a new long travel bike that was a bit of a do it all fun machine. I’ve been tempted by the high pivot enduro bikes that have been coming into play lately – particularly after testing the new GT Force. I love the way that they carry speed over rough sections and appreciate how composed they are when you’re absolutely pinned. However, avoiding the added weight, drag and complexity of the idler would be nice…Additionally, I made the jump to a mullet wheel setup on my DH bike and I’m very much a fan of the format. Unfortunately I’m not seeing too many enduro race bikes coming down the pipe that are ready for mixed wheels. Perhaps that time will come, but for now most of them are set up for the all out speed provided by full 29. In the midst of my endless scrolling I happened upon Williams Racing Products, who, amongst other things, make a slightly longer link for the Specialized Enduro that allows it to accept a 27.5″ rear wheel while correcting the geometry. I remembered back to testing the Enduro when it launched and I was very fond of the bike – particularly the way it carried speed. This was in part due to its rearward arcing travel path. However, the Enduro felt like a lot of bike and seemed a hair tall for me, which made it the perfect candidate for a smaller back wheel. Lastly, I felt that the Enduro was a touch on the progressive side, so I opted for a coil with this build to even out the rate a touch… 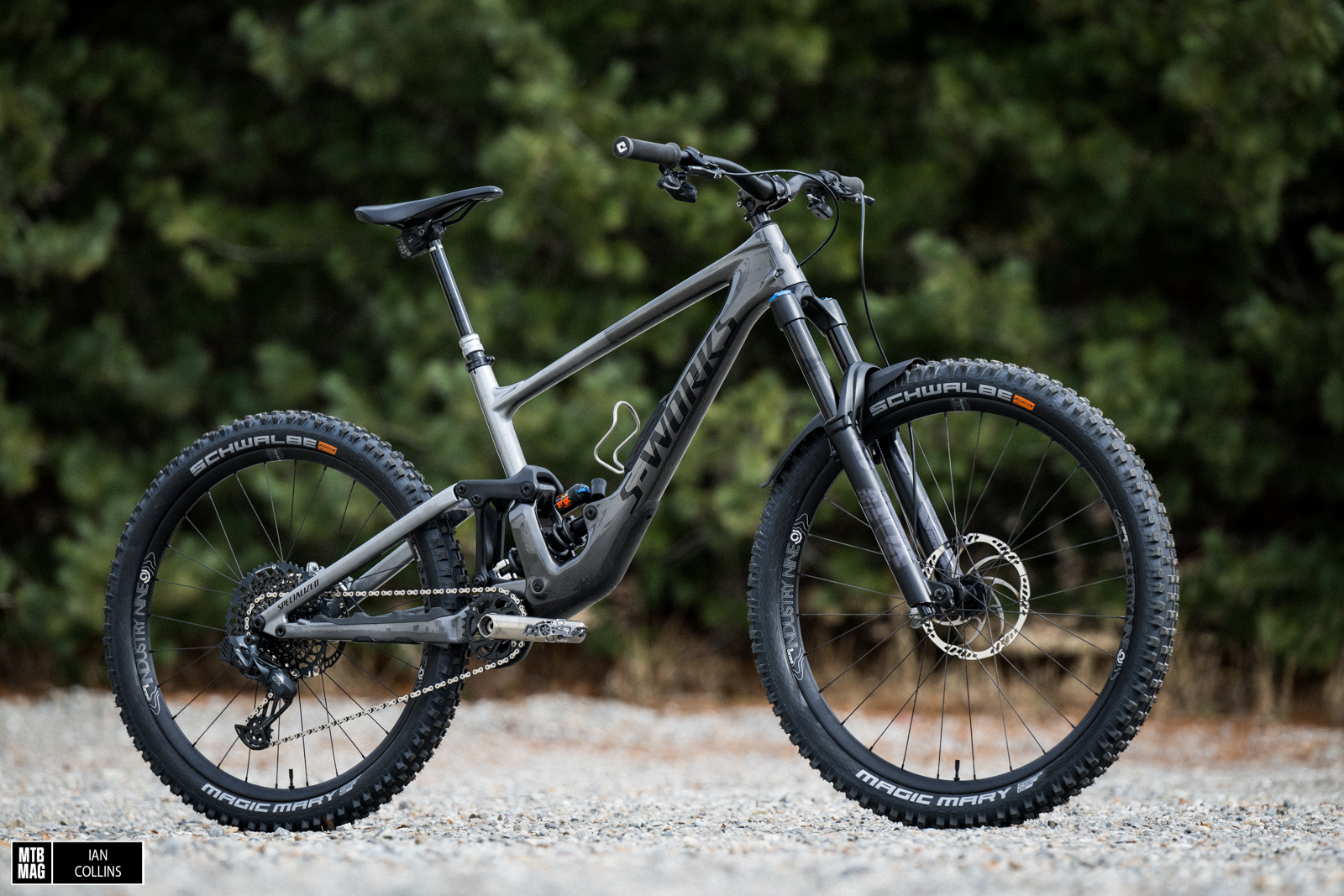 Feel free to check out the video below and follow along with some details on the specs of this bike. My initial intention was that this would be more of an experimental project than a dream bike, so I didn’t go all out with the build. However, after a few weeks of ride time I have to say it’s my favorite bike to date and if I could only own one bike, this would be it – proof of concept achieved! The brilliant WRP link is just a touch longer than the OEM link. This pushes the rear axle down and corrects the geometry for the drop caused by a smaller rear wheel. WRP also makes a neutral flip chip that sits between high and low. You can use that chip and the low position option, but not the high position setting- at least on my S4 anyway. 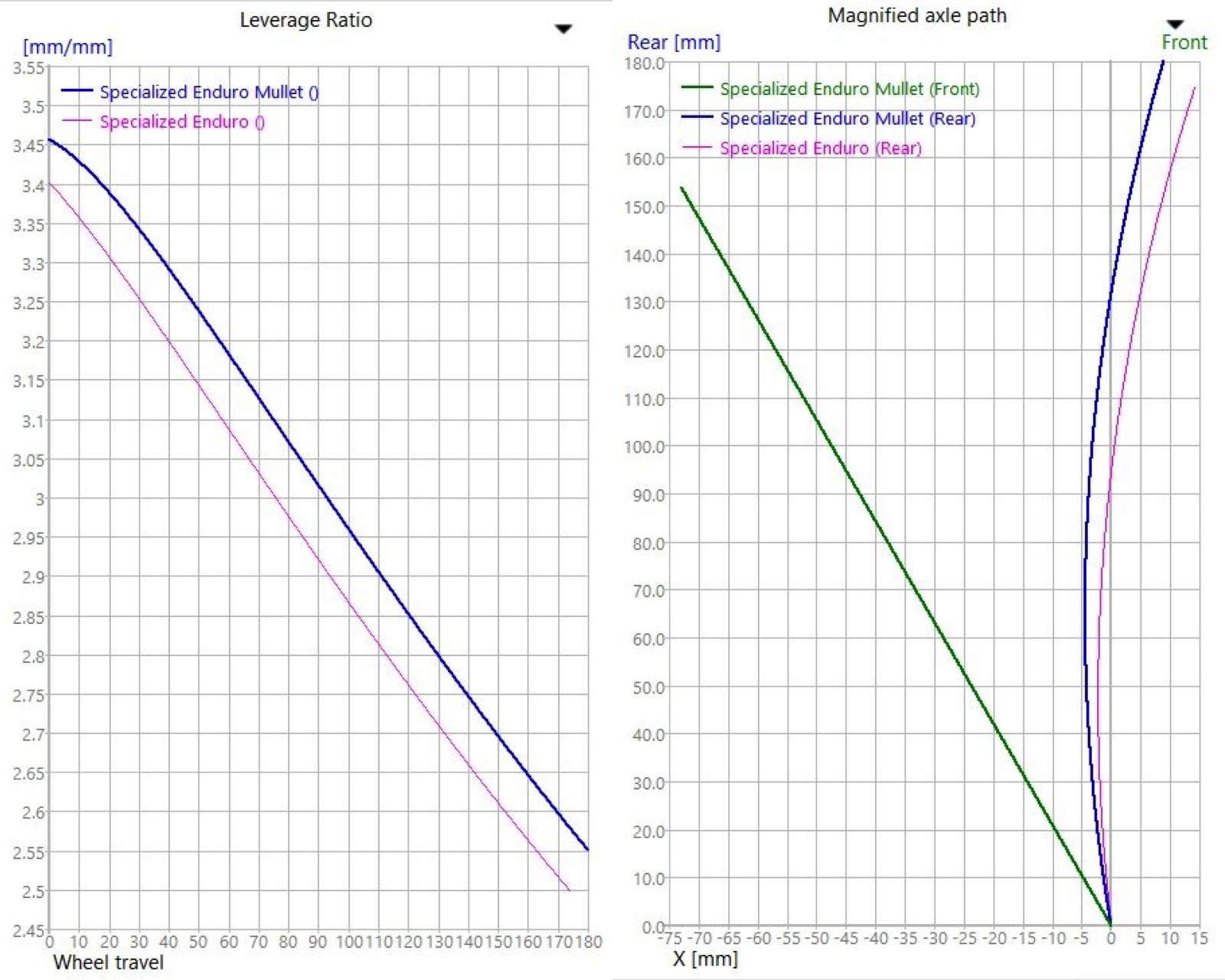 The effect on the suspension is two fold. First, there is a slight bump in the leverage ratio, but it follows roughly the same path. Second, the rear axle path picks up even more of a rearward arc, which is fine by me! I think it further helps with the rough stuff. 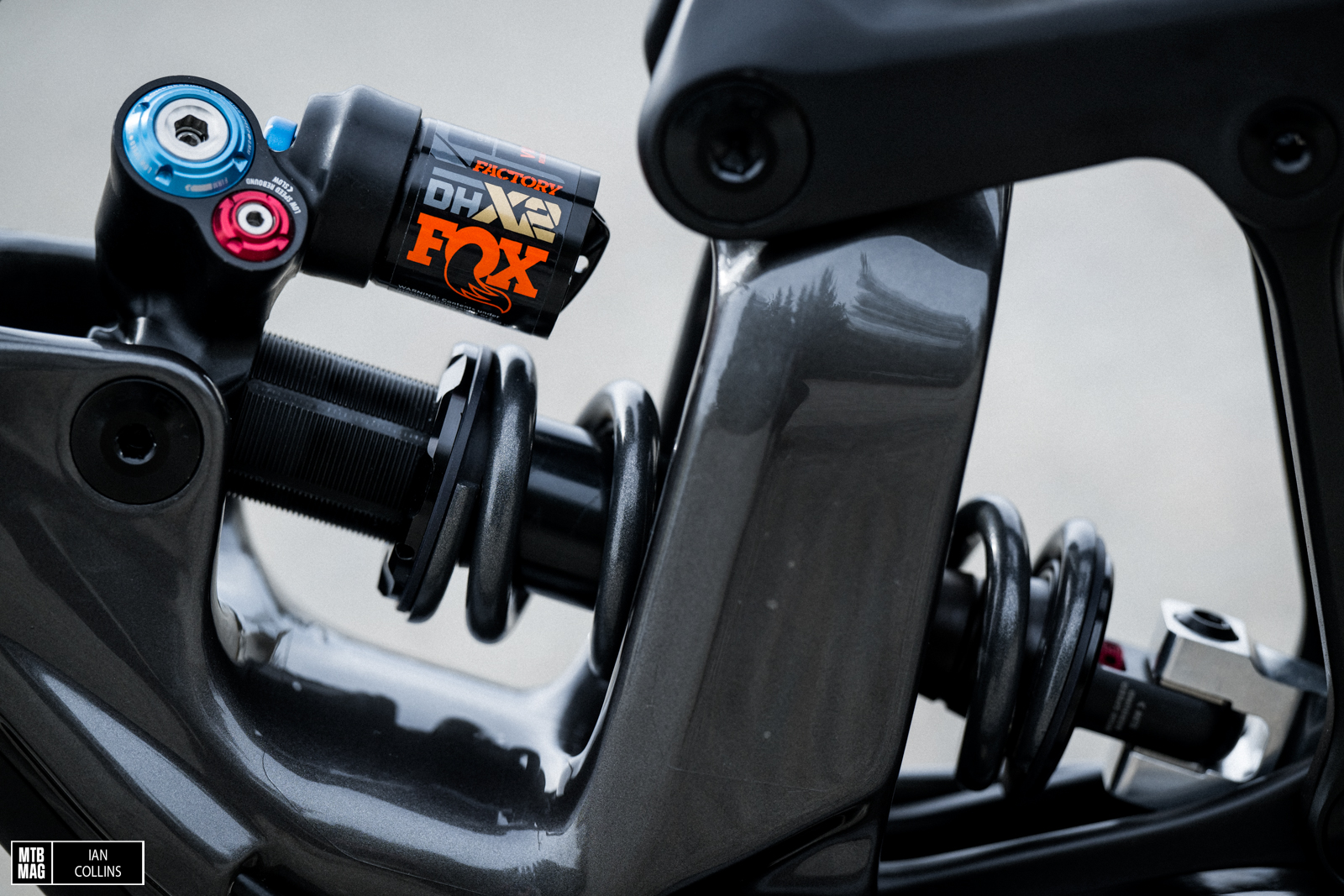 To offset the highly progressive rate of the Enduro, I opted for a coil sprung rear shock. I started out with a 525# spring and worked my way up to a 575#, which seems quite a lot for my 180 lb. weight, but that is the sweet spot. The fact that the EXT spring is almost perfectly color matched to the bike is another happy accident. Lastly, there is something special inside of my rear shock according to a pal at Fox. I have no idea what that means and I’m not about to tear my shock apart so stay tuned on that front… 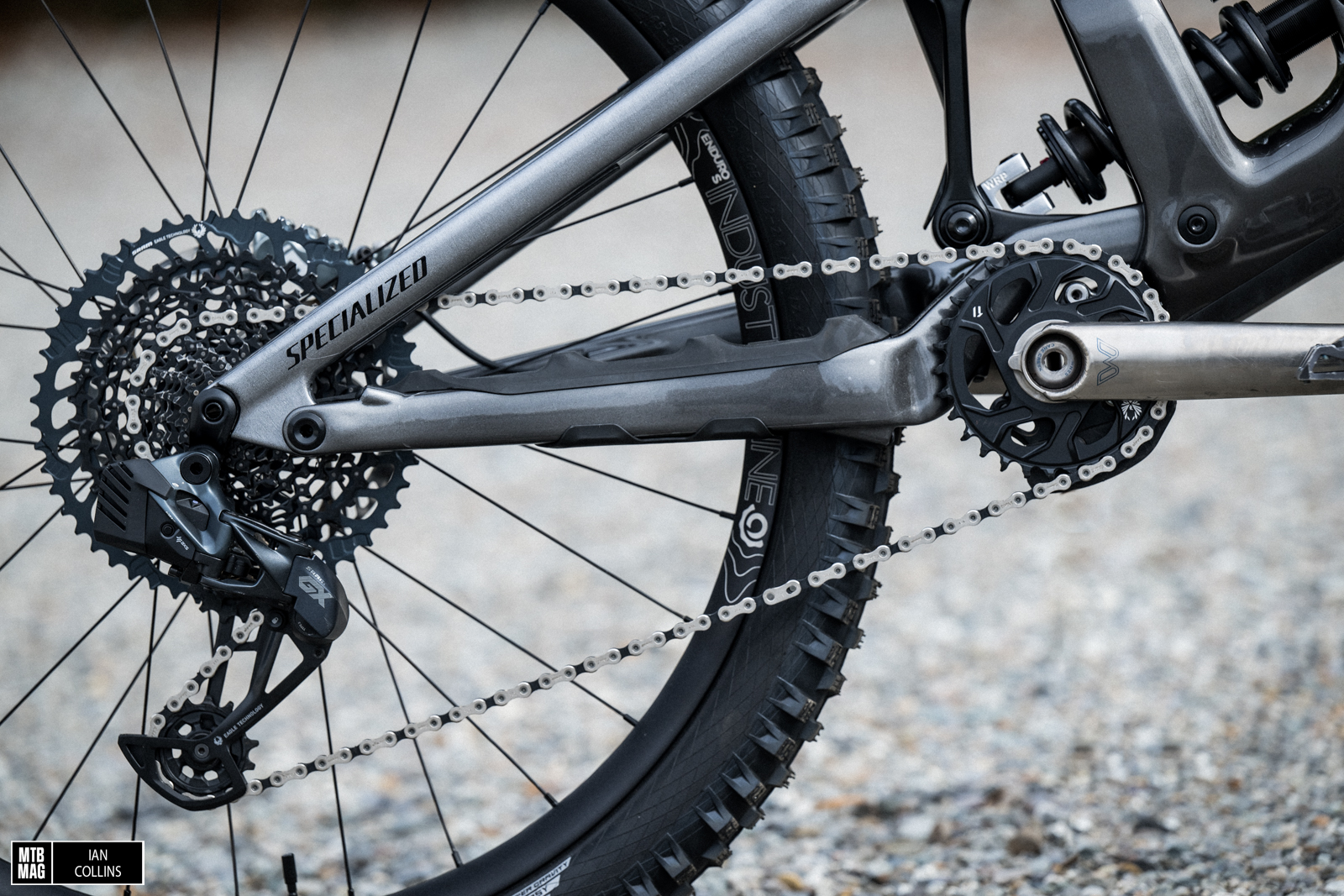 For a mix of utilitarian and baller I opted to go with a SRAM AXS GX Eagle drivetrain (one less cable!) and my trusty 3-4 year old Cane Creek eeWings, which are still the best cranks I’ve used to date. 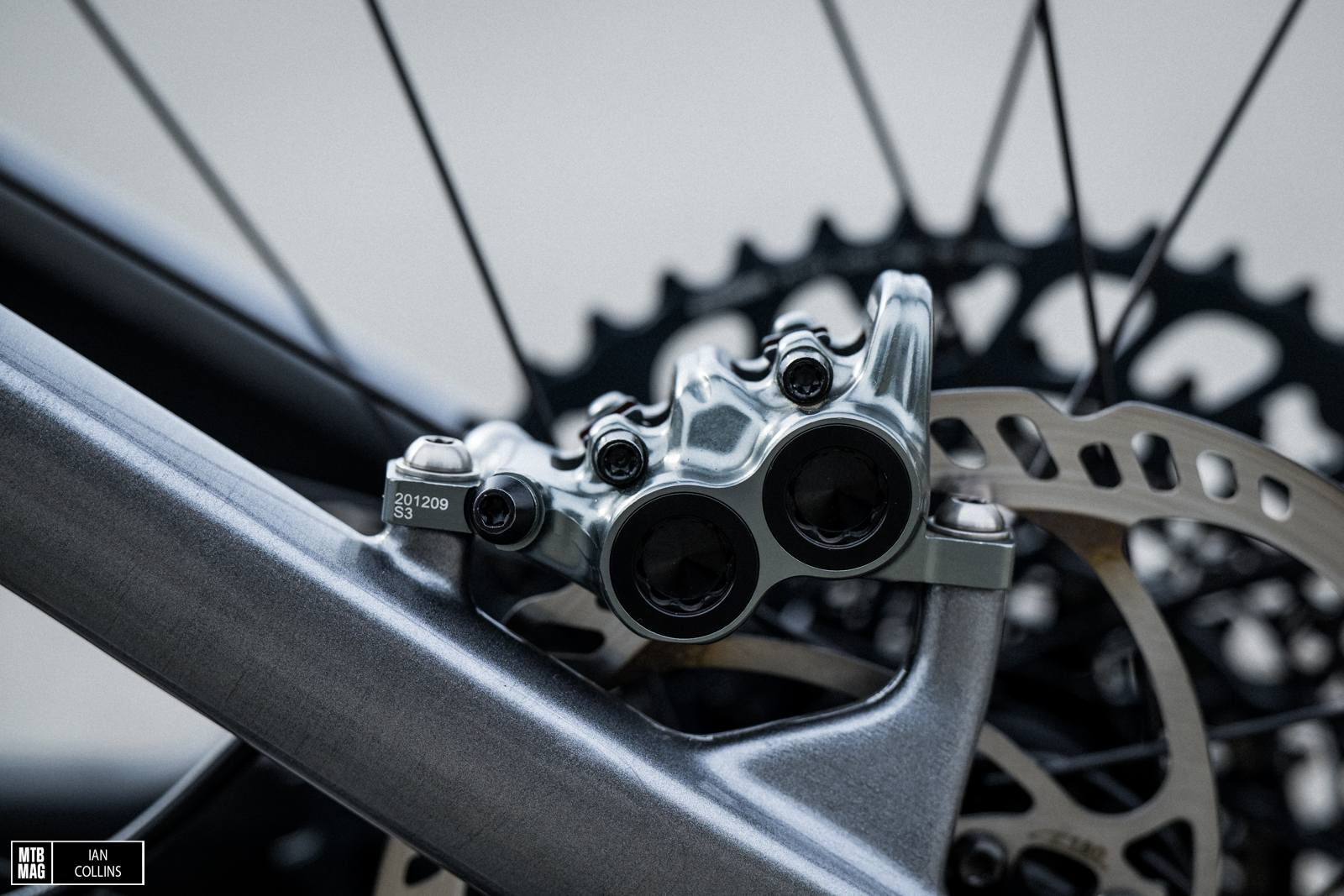 To keep things on the slightly lighter side, I am running the Magura MT-7 brakes. A 200mm / 180mm combo is more than enough power for this bike despite the fact that on some brakes I have been using 220mm front and 200mm rear on bikes in this category. The color was another nice coincidence. 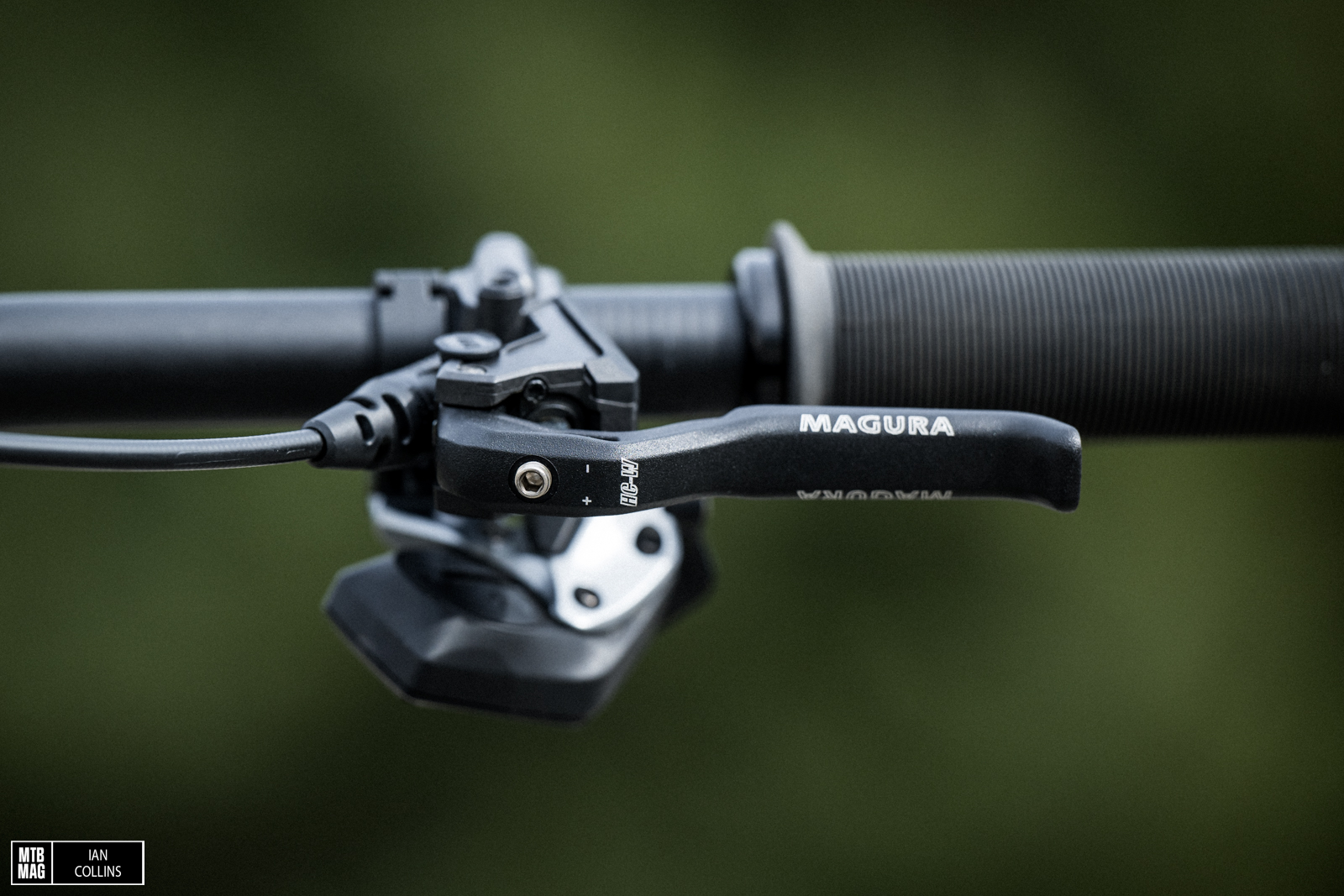 I had to do quite a bit of digging around and order the above levers from Europe. While they don’t say Bruni on them, they appear to be Loic Bruni’s signature lever and I really quite like their feel. Specialized was first to the game with the raised nubby things to stop chainstay slap, and this bike is QUIET. Magic Mary tires front and rear…Still my favorite tire after all these years. I am running a Super Trail casing up front and a Super Gravity rear – both in the Soft (orange stripe) compound. I started off with 2.6 front and rear but just switched to 2.4 as it seemed like overkill. Maybe when the bike park opens back up, I’ll switch back. Also – Reserve valves are the best I’ve used to date, so I had to include those. 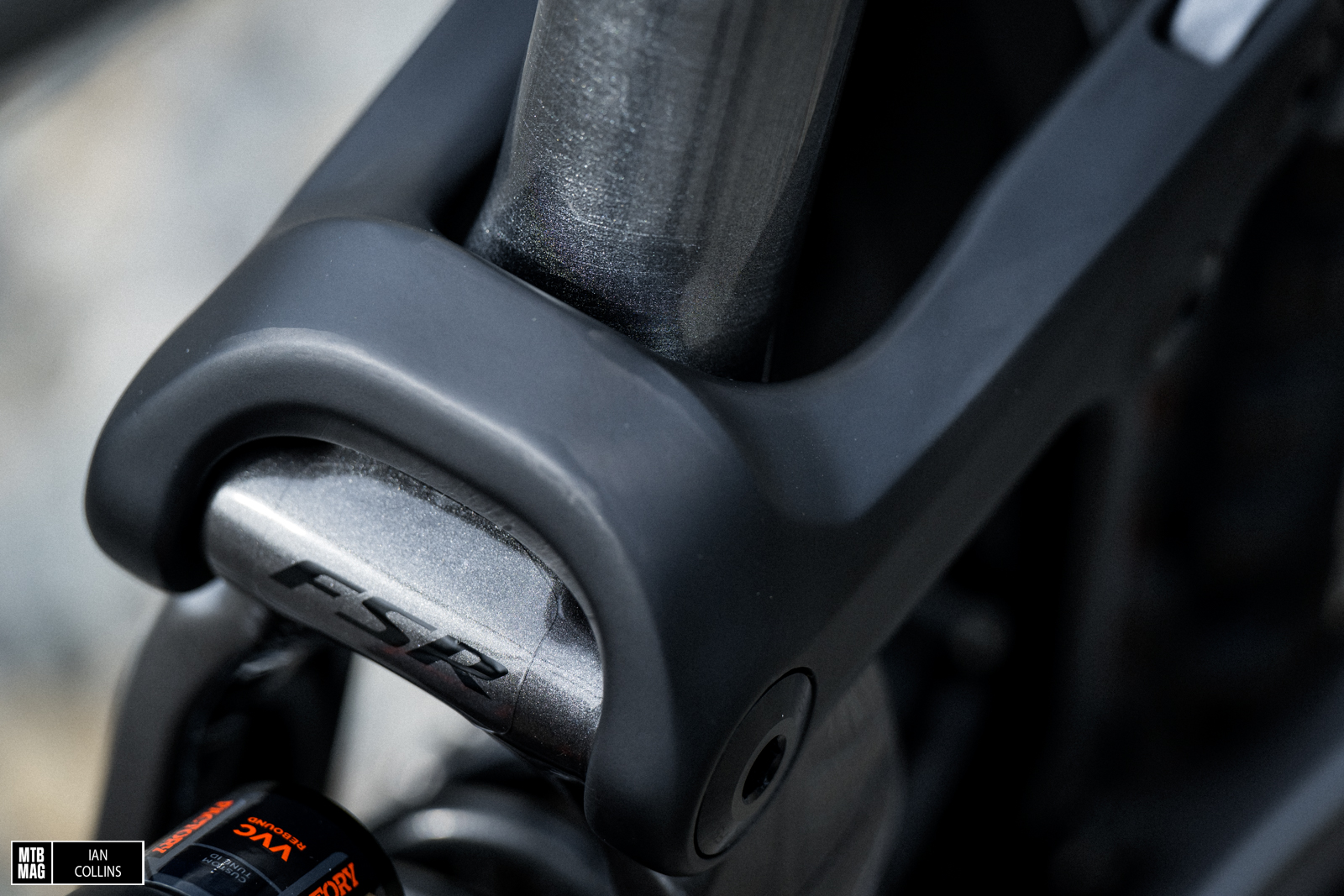 I was lucky enough to land an S-Works frame, which is nice because the carbon fiber links save close to a pound of weight. Speaking of weight, this size S4 comes in at about 33.5 pounds without pedals, cage, fender, tool, etc. 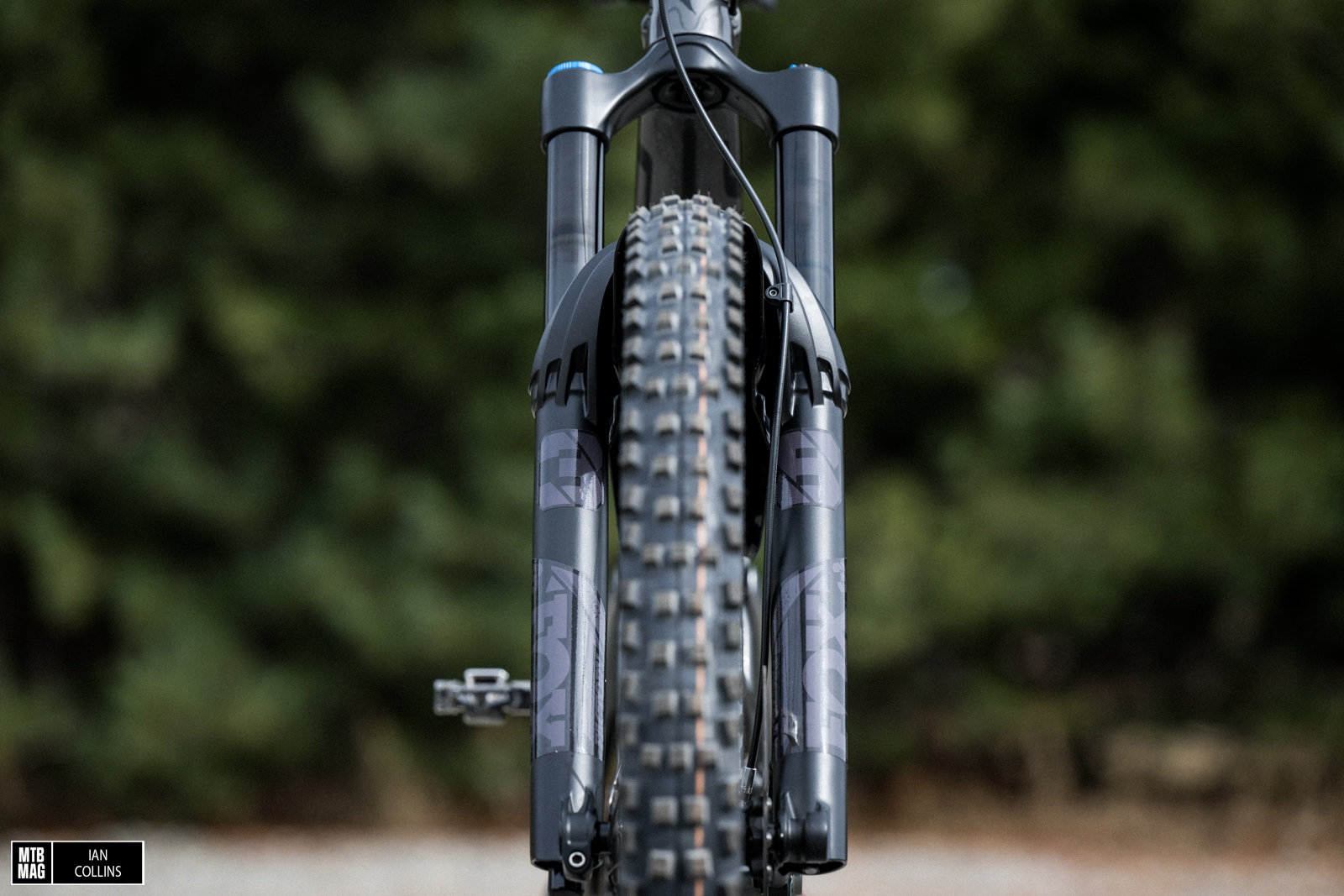 I opted for the Fox 38 Performance Elite up front with 170mm travel. Four way adjustable damping and a perfectly tuned air spring keep me very happy with this fork. I dabbled with the idea of a 180mm bump, but I don’t think it’s necessary. Again, maybe when the park opens… It’s pretty rare that I build up a personal bike without carbon fiber rims these days, but I’ve been giving that some thought lately. There are a handful of prebuilt wheels with aluminum rims and premium hubs that are about the same weight as carbon wheels and 1/3rd of the price. The Industry Nine Enduro S wheels pictured here land right in that camp and I absolutely love them. Great value, no frills and premium quality. 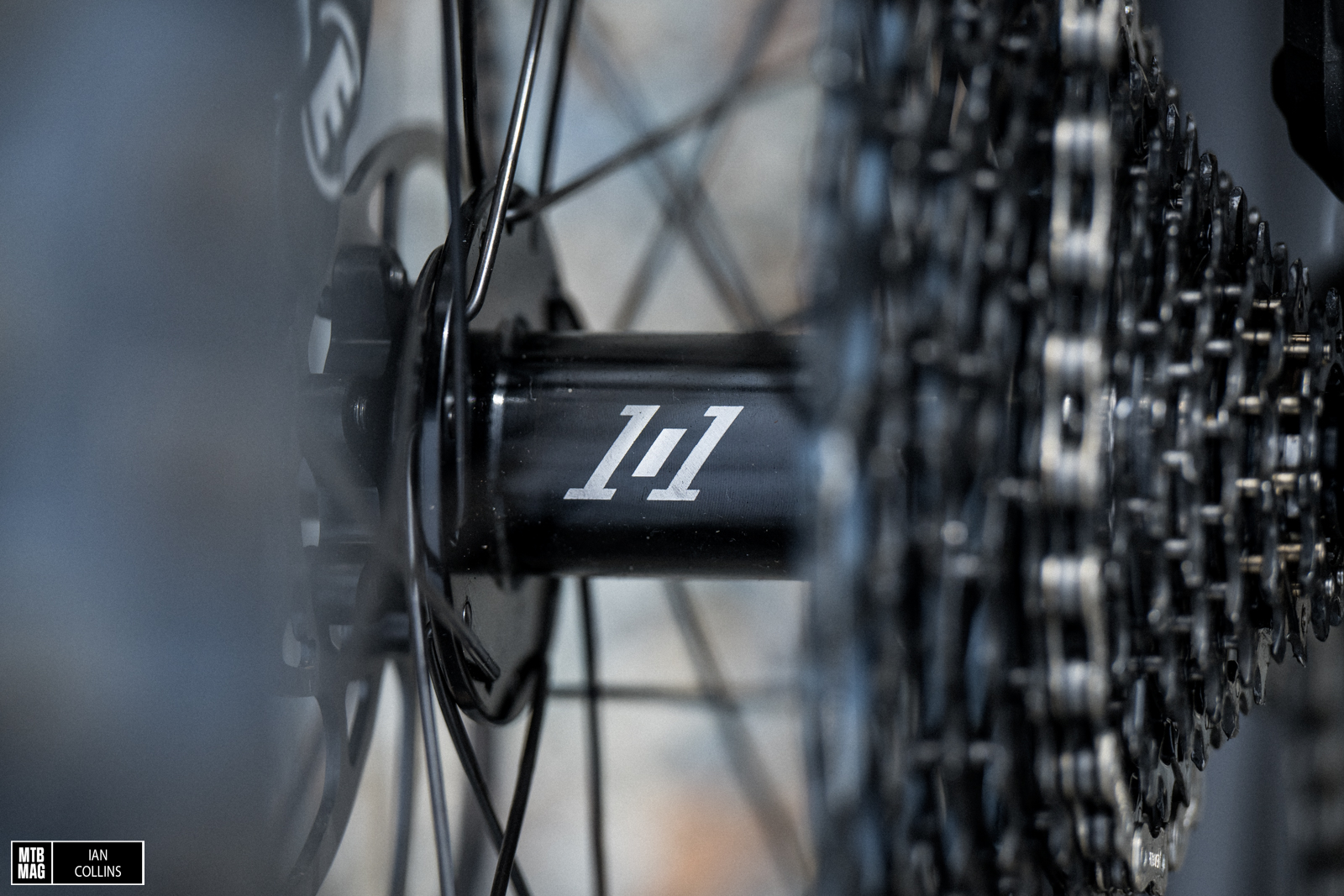 That these wheels roll on the fairly straightforward I9 1/1 hubs is just fine by me. They offer fast engagement and tool free rebuilds at a reasonable weight, which is great for a bike that will be taking a beating. 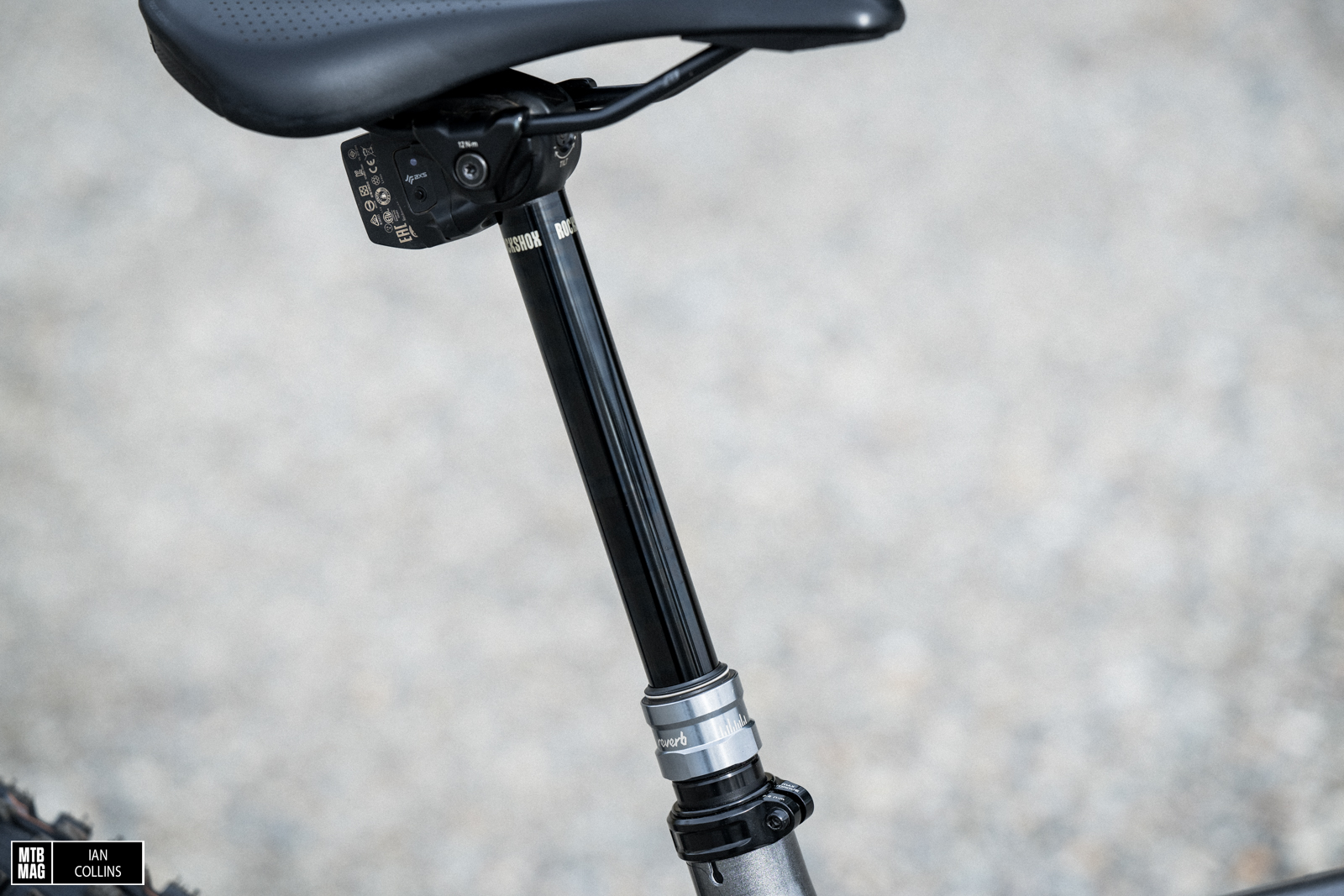 I stuck with my go to 170mm travel RockShox Reverb AXS Seatpost. I believe this was my original test post when it first came out. Zero issues so far… One of the Reverb AXS’ biggest perks is that it lends to a nice tidy front end with one less cable. Rounding things out, an Industry Nine A35 stem in a 40mm length with a OneUp Carbon bar in 38mm rise and my favorite grips – the ODI Longneck V2.1. Lastly, I love the color schemes from Specialized lately with a hard break between two colors on the top tube and a dégradé fade of them at the seat tube. Good stuff. Thanks for checking this piece out. Holler with any questions in the comments…