Steve Peat hardly needs introduction. It’s safe to say he is the most universally loved and respected downhill racer of all time. He has been racing the World Cup circuit for over 20 years. Although in the history books Steve is the winningest racer of all time, for a great deal of his career he battled hard luck when it came to World Championships. It wasn’t until 2009 that he won his first World Champs. Five years later Peaty is just as motivated and charging hard. This year has been exciting for Steve – he turned 40 in June and “Won’t Back Down” : a multi year project documentary film on his legacy was released. In between rounds we had an opportunity to catch up with him, pick his brain and see what makes him tick! 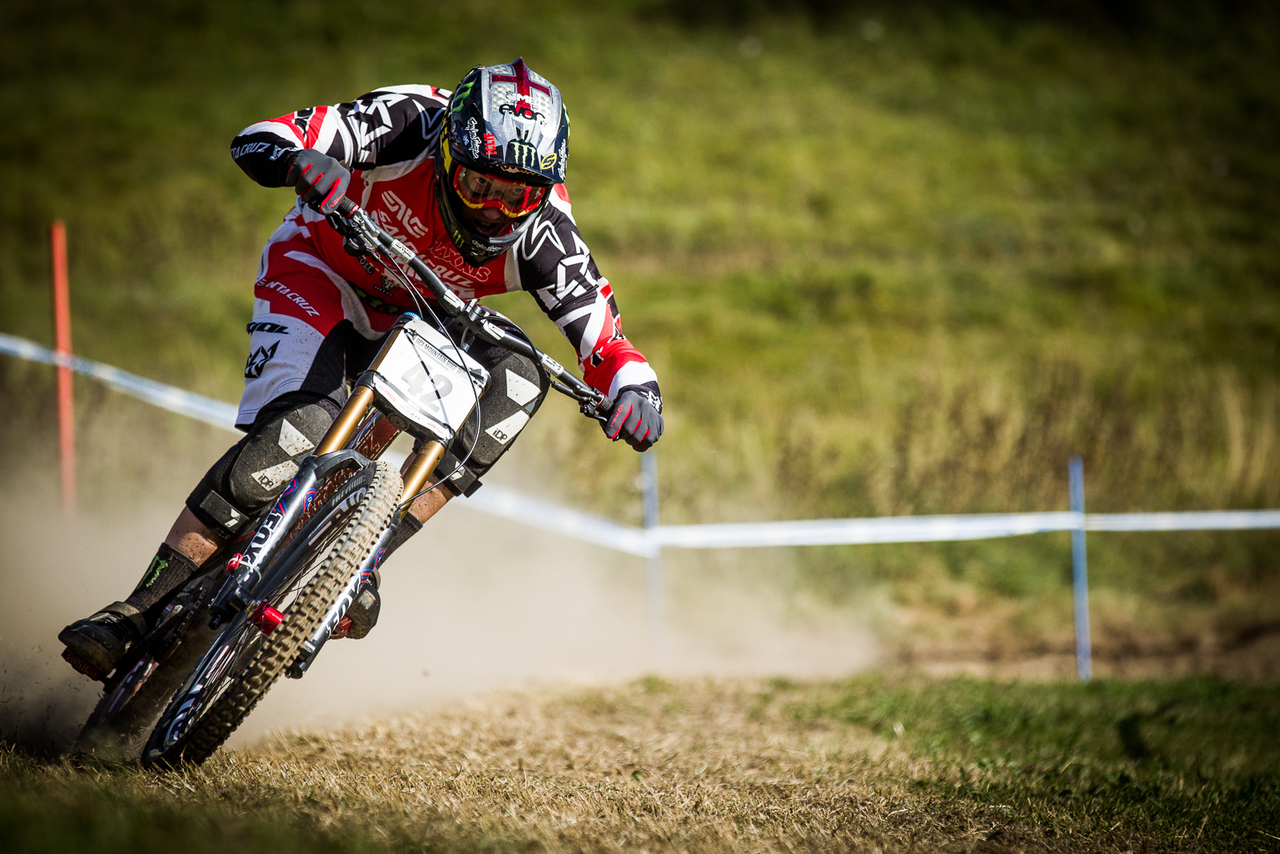 MTB-MAG – Some of us mere mortals think about your career and put it in scope with our personal experiences – crashes, minor injuries etc.  Then, that is fundamentally what makes us scratch our heads and wonder how you keep doing it.  We all love mountain biking and we know that it doesn’t get boring, but it’s the toll it takes on the body over time.  Given that, do you have any secrets to rehabbing injuries?

Peaty- I don’t have a special formula or anything, I just like to get back on my bike as soon as I can. It certainly gets harder and harder to recover the older I get, but at the end of the day it’s what I have been doing for years and still love it. 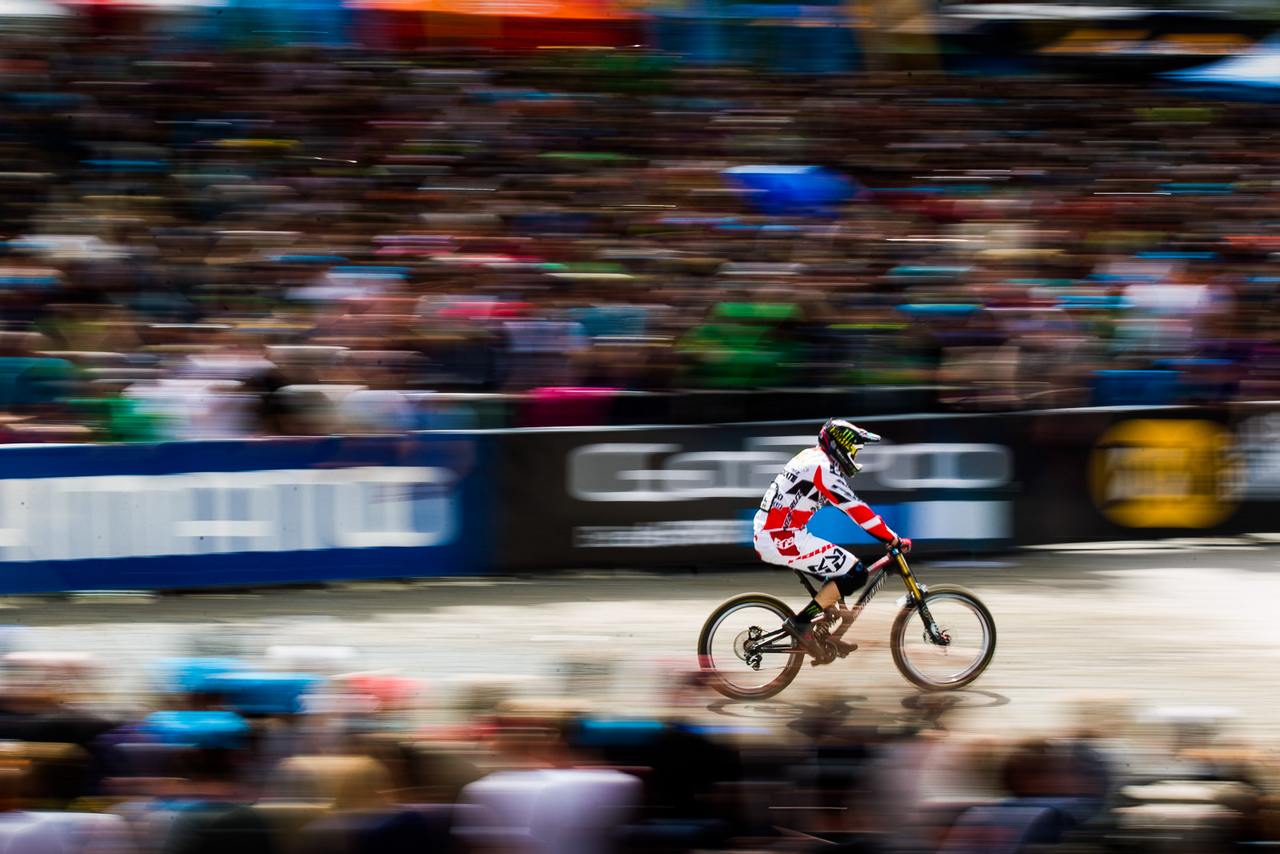 MTB-MAG – We don’t want to make you sound like an old dog, but we’re all impressed and intrigued – wondering how you do it!  Is there any pre-race prep that you do to see to it that you feel strong, so that old injuries don’t come back to haunt you?

Peaty- I have a great trainer back home, Adela Carter. We work on pre race routines to get me firing, and we do lots of rehab stuff in the gym setting me up for the coming races, but I personally think it mainly down to experience, I know what I need to do to make my mind and body fire when the beeps happen in the gate.

MTB-MAG – We’d all be a bit surprised if we saw you on a yoga mat or something, but there has to be something you’re doing differently to stay this resilient.  Most guys are done by their mid 30’s – you just got 7th at Cairns at nearly 40.  That’s unbelievable! So – how do you do it?

Peaty – Well as I said before, it’s all I know now, I know how to get myself in the mood and I know how to lift my game for the final run, but it’s getting harder with every birthday….ha ha! 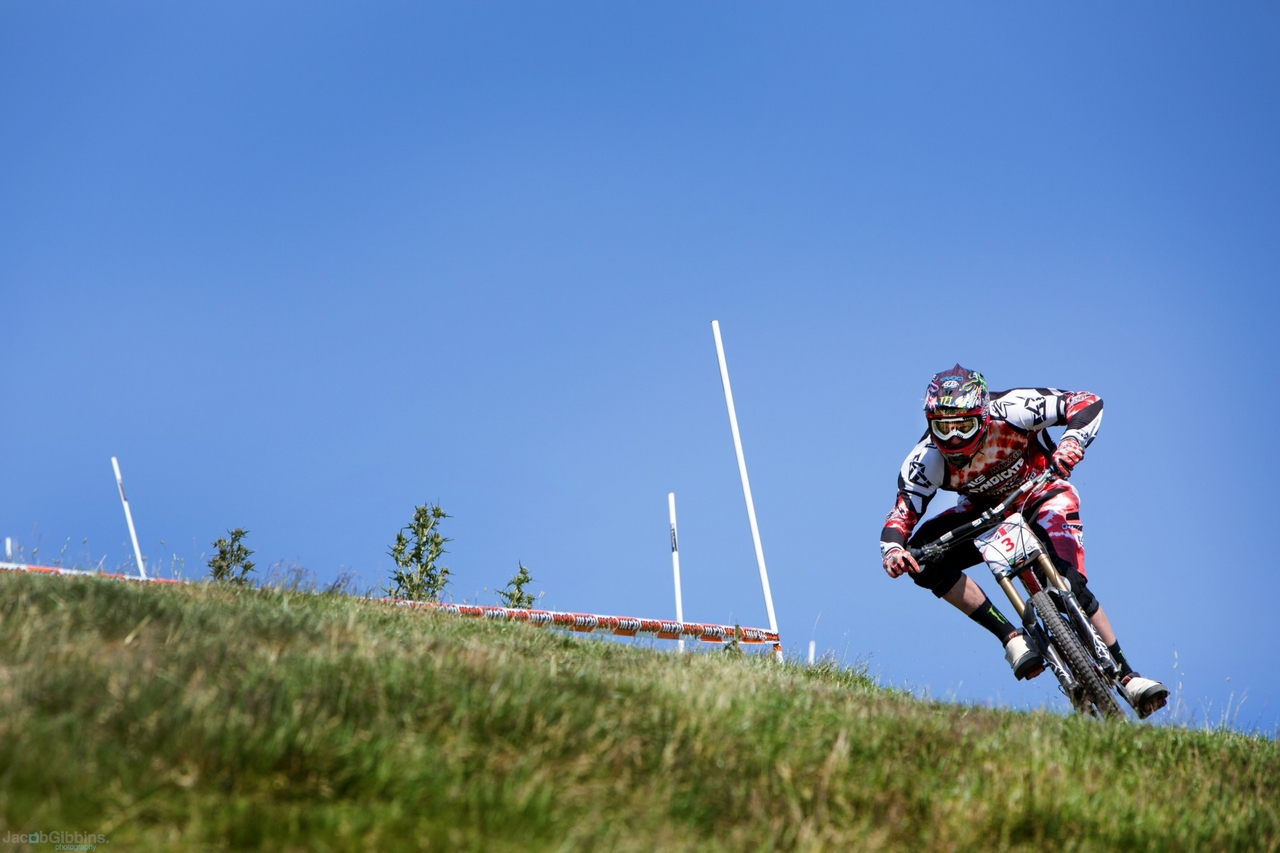 MTB-MAG – The only athlete that you can really be compared with after such a long incredible career is someone like Kelly Slater.  We’re not sure if you follow surfing, and it is vastly different than World Cup Downhill, but it’s similar in a sense that surfing has seen a radical curve in it’s progression, just like downhill.  The two of you have both followed that curve.  Like Slater in surfing you are the only person that has been around in the downhill’s adolescence but have remained on top and relevant for 20 years.  That’s absolutely unheard of in any traditional sports.  With the young guns always stepping up the game, bikes getting better and tracks getting gnarlier, do you think that the progression is a driving force in what keeps you excited to chase the podium?

Peaty – Well, I am honoured to be put on a level with Kelly Slater, he is an amazing athlete and someone that I look up to as well. I think the progression is easy to keep up with if you’re living the moment, I like to live my life and DH is a huge part of that life. It brings me happiness, friends and family and health. I also work with great sponsors and am really happy with my surroundings. All these key facts really help me keep up with this progression. 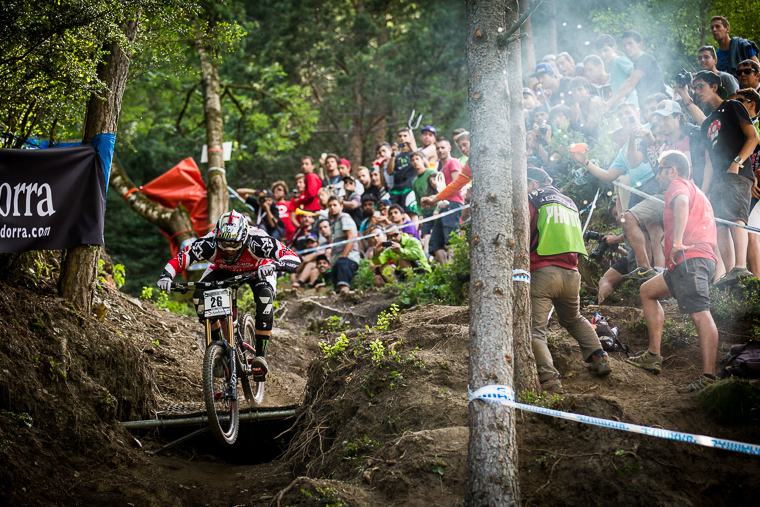 MTB-MAG – Some people thought after winning Worlds in 2009 you’d possibly retire, and a lot of others sort of expected you to just take it down a notch and back off a bit.  Clearly that didn’t happen and you still won’t back down.  Speaking of – congrats on the movie.  It really hit home with countless people.  That must’ve felt good.  The project itself began to crystallize nearly 5 years ago.   That had to have been quite an effort on both your part as well as Clay and Lawlor’s.  What was that like?

Peaty – Yes – winning Worlds was huge for me, but I didn’t feel done at that point!!! It was great to be able to work on the Movie and it has taken many years of collecting footage and trying to document my great sport of DH to the masses. I think Clay and John deserve medals for their time and effort, and can’t thank them enough for the amazing job they have done on “Wont Back Down”. It’s awesome to get positive responses from the fans that have seen the movie, and also from people that don’t know the sport so well. It is not only my movie it is an education of the last 20 years of Downhill Mountain biking. And yes, it did take some doing!!!!!! ha ha 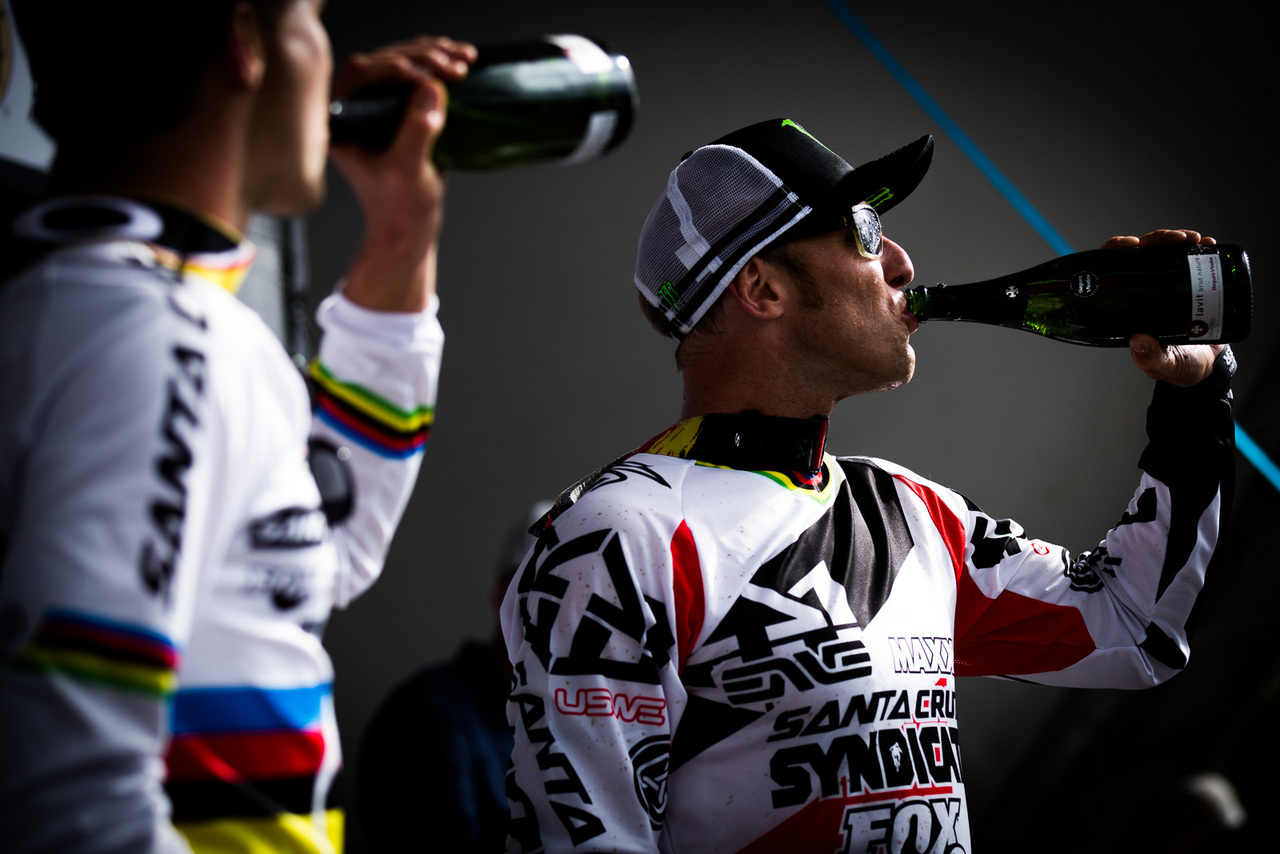 MTB-MAG – You loosen up and enjoy a beer unlike a fair bit.  Does that mean that you feel the need to train extra hard, or be super regimented about your diet after a good weekend of fun?  Or are you just an all around machine that can’t be stopped?

Peaty – I would love to say I am a machine that can’t be stopped but that would be a lie, it certainly takes longer to get over a big session on the beer these days, but I still get to ride my bike and enjoy time with my friends so it’s all worth it. 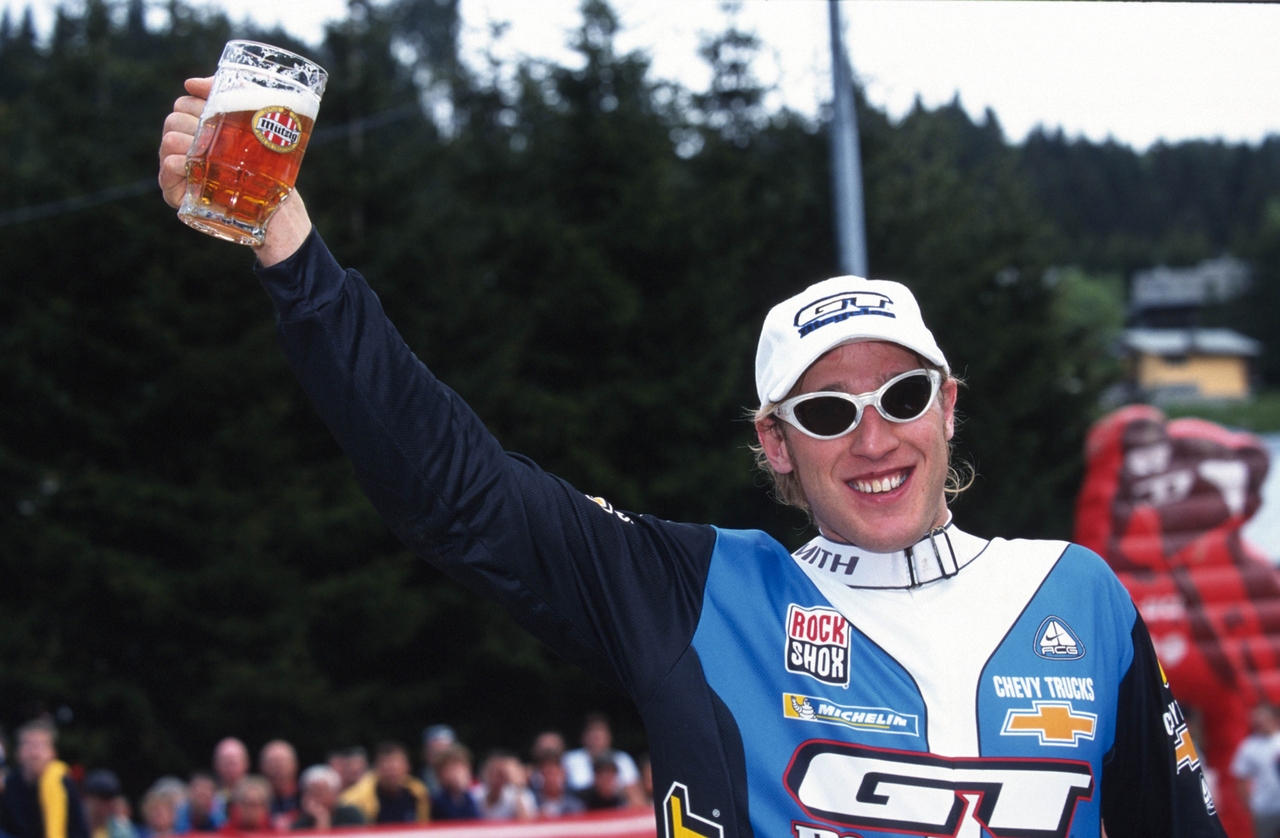 Peaty – I am pretty sure its 116 or damn close to that anyway.

MTB-MAG – Do you still have any particular goals you’ve set for yourself at this point or is your mentality just to charge as hard as you can as long as you can?

Peaty – Keep on charging, yes I do set goals as well. I think you need to these days, there are so many ups and downs along the way you need to be able to focus. 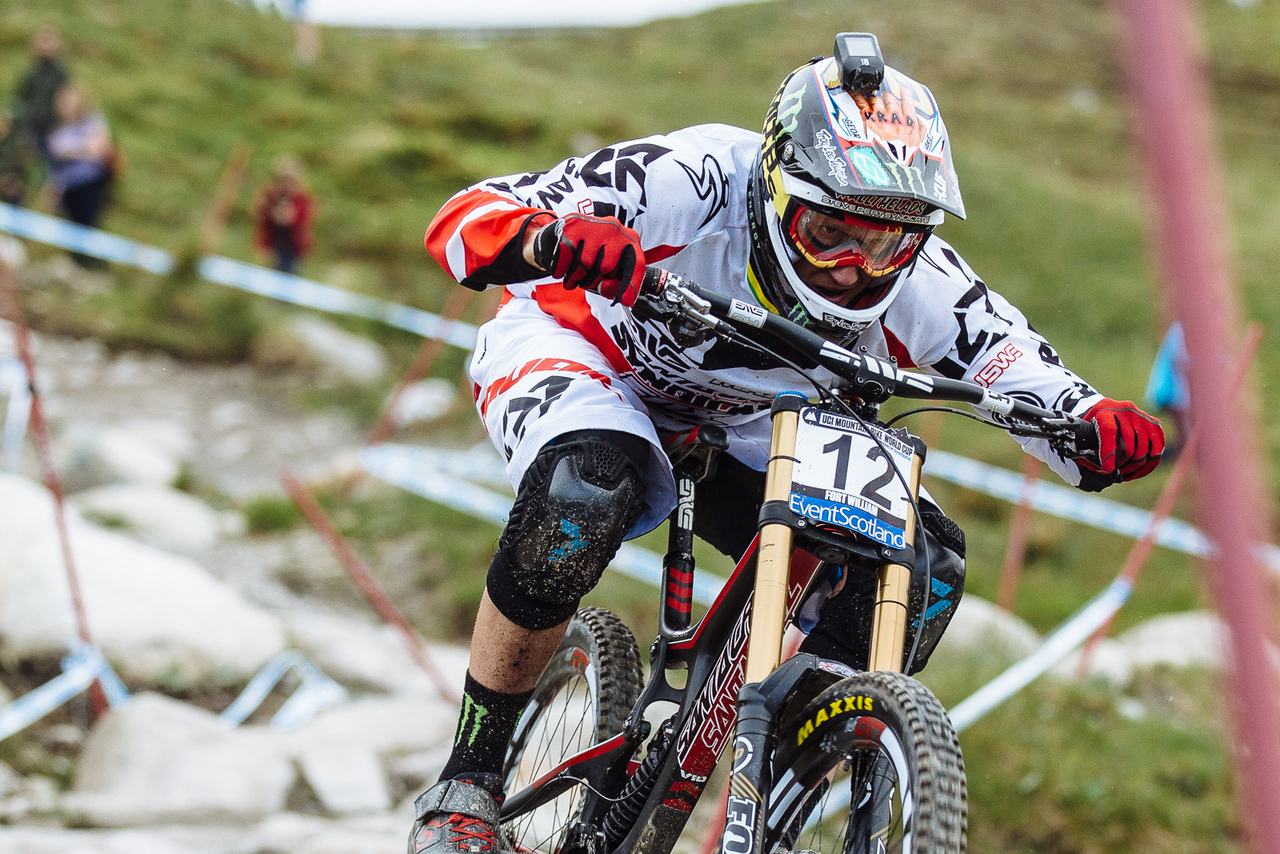 MTB-MAG – Jake and George.  Your two boys.  You seem to be loving fatherhood.  Is it tough to strike a balance when you’re on the road so much, or do you get some opportunities to have the family come cheer you on a bit?  Would you say they help keep you motivated?

Peaty – It is very hard to get a balance, I feel as if I miss certain things in the summer as I am racing most weekends, but then in Winter, I get much more time with them. Its very hard, I would like them to be able to come to more events but it’s not easy with school and holidays these days!! I tell them that if i had a normal 9 to 5 job they would actually see less of me!!! They don’t always believe me! ha ha!

MTB-MAG – So at some point, retirement is inevitable, what WILL you do when you retire?  It would be hard to picture downhill with you removed from the scene completely – you’re a staple.  You’ve been a huge mentor to riders and racers all over the world, especially the young bucks on the UK scene – could you see yourself coaching or possibly managing a team? 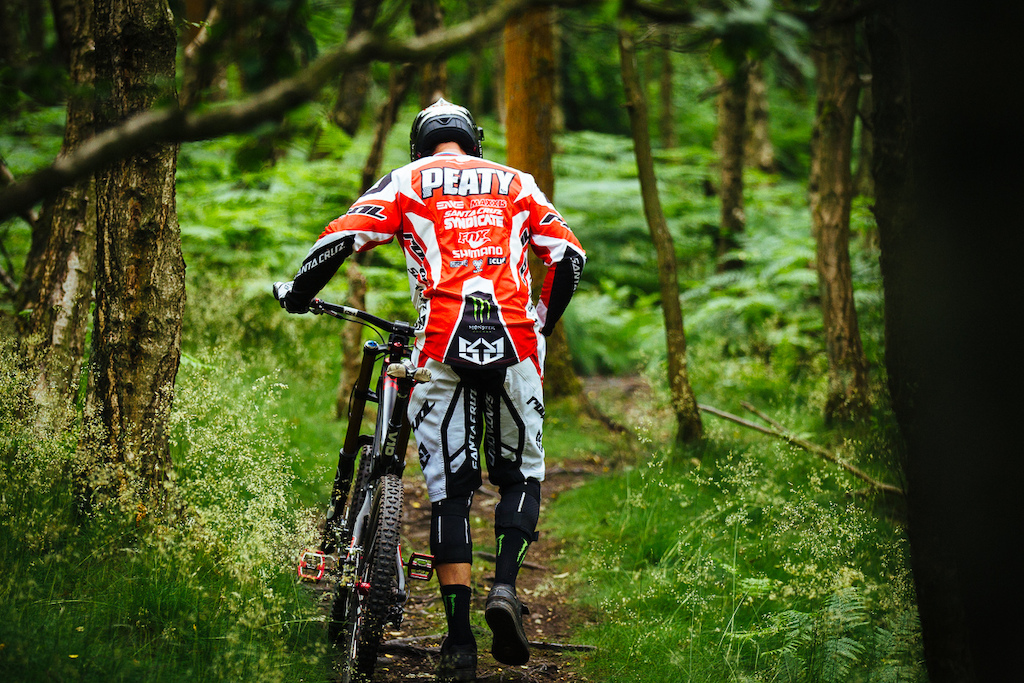 MTB-MAG – Well, best of luck at Mt. St. Anne and with the rest of the race season!  Thanks for taking the time and letting us chat with you!