Thursday, August 18, WHISTLER, BC —Day seven of Crankworx Whistler action saw the local hero whip his way to the top and a former pump track dominator regain his mojo.

“This final was sick. It was really fast. I just did a small mistake and that’s enough to lose,” said Loron, who was nevertheless thrilled to be taking home the series win.

Pump track pits two riders against one another on parallel courses designed to have the rider pump, rather than pedal, their way through. It is fast, furious and requires a certain finesse to accomplish the task, yet Ropelato barely seemed to break a sweat, coming down the track almost stone-faced he was so relaxed. 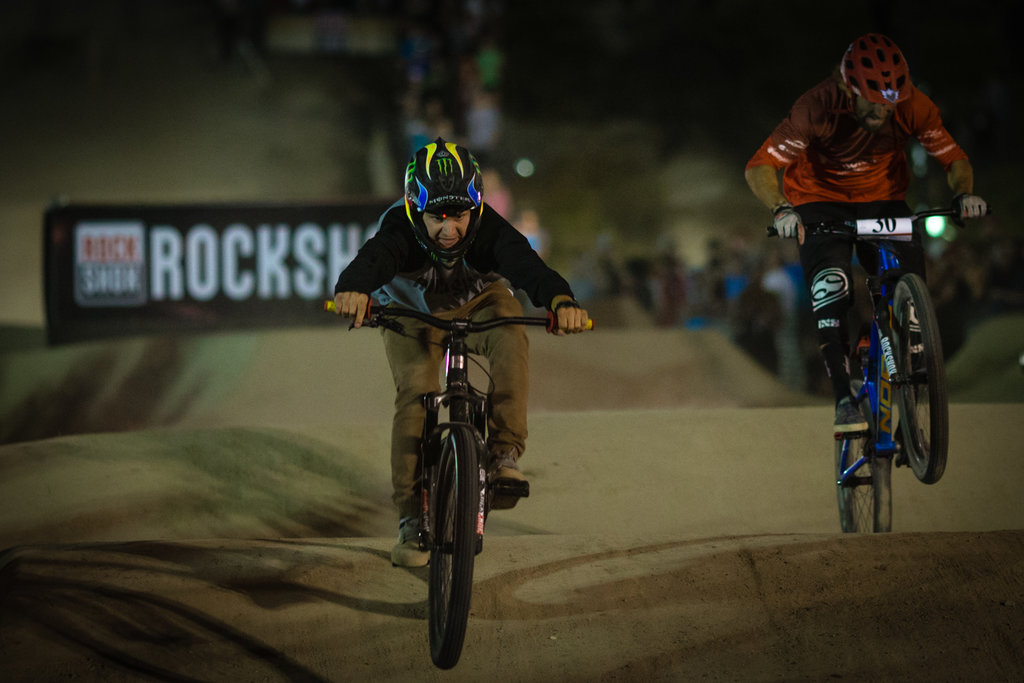 “I’m pretty excited. It was a hard day – a lot of fast people and a lot of easy spots to make mistakes. So, I just kept it clean and got to the finish line faster,” he said.

For the women, American Jill Kintner continued her reign as the woman on top of the podium for Crankworx 2016. Chasing down the Queen of Crankworx overall title, her smile seemed to grow by a mile after the late-night win, which takes some of the pressure off by strengthening her lead.

“All anyone ever talks about is I have to gather as many points as I can get. I have (Dual) Slalom tomorrow, but this was pretty good too,” she said, with a small laugh. Dual Slalom is by far the Bellingham athlete’s strongest event, although she has won the Crankworx pump track competitions nearly as many times, including all three this year.

From Dual Slalom practice to whip-off to pump track time trials and finally the main show, the day was action-packed making victory that much sweeter.

“I feel great. It was like the biggest day ever,” said Kintner, who was also named Pump Track Challenge Series winner.

If there is one competition where Kintner is never on top, however, it is the whip-off and the woman who owns the event, Revelstoke, British Columbia’s Casey Brown, maintained her stranglehold in the Official Whip-Off World Championships presented by SPANK in the first competition of the day.

Even though she is undefeated in the discipline in its three year history—international events included—Brown had to fight for this win, although this time against Mother Nature.

“I was catching the trade winds on my bicycle. It was a bit scary,” said Brown. “It was good. Everyone was kind of concerned about the wind, but we just kind of got through it and learned to whip in the wind.”

A whip sees the rider twist the bike to a 45-degree angle in the air off a jump before returning to a straight position for the landing, and it was the local hero’s turn to return to the top for the men. Crowd favourite, 16-year-old Finn Iles, blew the judges away with a whip which simply couldn’t denied.

Iles was too young to compete when he first won the event two years ago, and earned an entry through groundswell of social media support pleading to let him in with the hashtag #LetFinnIn. He has since signed with Red Bull and is racing the UCI World Cup downhill circuit with sensational results. But a win at home is always a great victory.

“The vibe was pretty incredible. There were so many people here it was ridiculous. You could barely get up the hill and there were people swarming the track. It was pretty sick. It was the best one I’ve been to so far,” said Iles, who judged rather than compete in 2015, due to injury.

Crankworx Whistler is one of three Crankworx festivals held around the world, and is now in its 14th year with seven live broadcast events. The other two stops are in Rotorua, New Zealand, in March, and Les Gets, France, in June.

The Ultimate Pump Track Challenge presented by RockShox was Thursday’s live broadcast and it was shown on Crankworx.com and Pinkbike.com, and sold to television networks around the world as a live broadcast and will be packaged into shows for extreme sports networks.

Events continue through Sunday, August 21, culminating in the marquee event this Sunday, Red Bull Joyride, is a Slopestyle competition which sees the athletes perform an aerial show, jumping off a string of wooden features before a crowd of 30,000-plus fans.

Results for the Ultimate Pump Track Challenge presented by RockShox:

Results for the Official World Whip-Off Championships presented by SPANK: