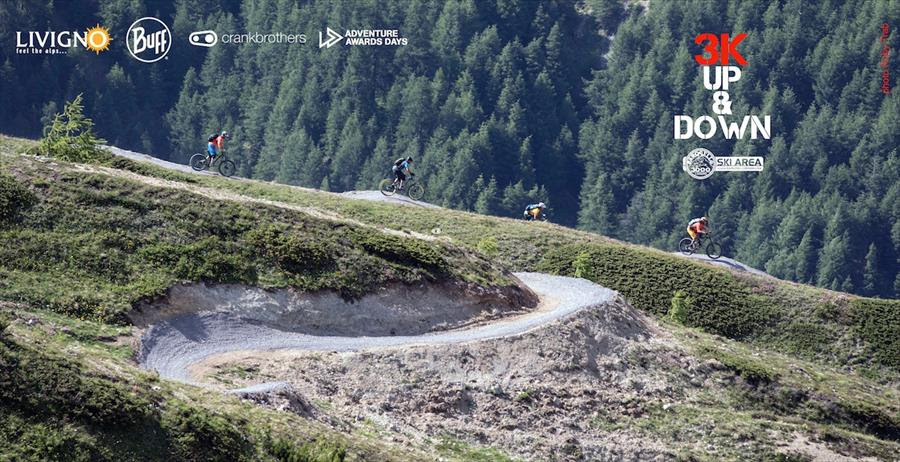 [Press Release]
It was one of the news in the summer of mtb in Italy: the 3k UP&DOWN, an event created for the flowcountry trails of Carosello3000, in Livigno.

The formula is simple: how many times can you ride in a day a trail of 13km, also using two cable cars? It’s not only going downhill, it’s not an enduro, it’s not an xc: it’s a way to enjoy the trails of Carosello3000 with any type of mtb, chasing your own record, competing with the pro host of the event (this year Alan Beggin and Adam Quadroni) or just have fun with your friends.

The first edition was sold out, and it took place on the 2nd of August, with 100 participants who arrived in Livigno: the leading group has traveled more than 110km of trails!

From today is online the official video of the 3K UP&DOWN, created in order to capture the spirit of an event built to entertain and not to chase a result.

It has been confirmed the 2016 edition, which will see a new path, an international pro rider and also some fun new features, including the possibility to measure the distance and vertical drop, thanks to the functionality of My3000, the Mobile App of Carosello3000.

The staff is also at work in order to make the 3K a test day, during which you can try different bikes.

Carosello3000, after the success of the flowcountry trails this year, including the Hutr Dream, which opened after the event, in mid-August, will present new trails for the summer 2016, with the same philosophy that has made this “mountain bike project” one of the most interesting of the season in Europa. Among the projects, a trail that will combine the features of the flow trails to some “enduro” passages.