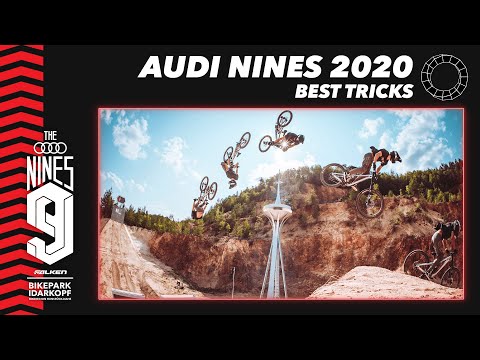 The dust in the Ellweiler quarry has settled after another epic week of mountain biking at the Audi Nines presented by Falken. That means it’s time to sit back and enjoy the week’s biggest moments with the Trick Highlights edit.

After spending much of the past year cooped up inside, the Audi Nines athletes were chomping at the bit to throw down their best maneuvers on this year’s next-level setup. The result? A shot bag filled to the brim with groundbreaking tricks, including several world’s firsts.

In the Best Trick (Slopestyle) category, Sweden’s Lukas Skiöld took first place with a highly technical combination, landing a backflip with barspins in both directions and a whip tossed in for good measure. He was followed by Diego Caversazi in second and Peter Kaiser in third, both with their own innovative backflip combos. Spaniard Adolf Silva sealed the win in the Best Trick (Downhill Bike) category with his stunning Cali Roll, which he first landed at Audi Nines in 2018. Nico Scholze’s world-first Cordova Backflip earned him second place, while Antoine Bizet took third with his Opposite Cash Roll, yet another never-before-seen trick.

Enjoy all of these winning tricks, as well as the rest of the outstanding contest entries, in the Audi Nines 2020 Trick Highlights edit. This is mountain biking like you’ve never seen before!