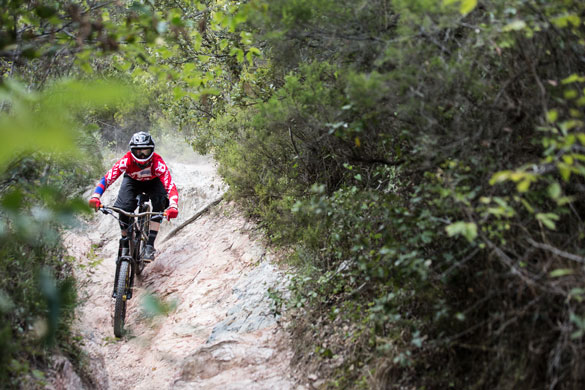 BlueGrass have put together this super sick course preview of stages one through three coming into the last round at Finale Ligure.  Enjoy!

Poste is an old trail that was often frequented by hunters in the past, over-grown and out of use. With the Enduro World Series returning to Finale Ligure, the decision was made to clean up and rebuild Poste for this stage of the series. It begins with a steep descent from a hill, drawing a singletrack in the grass. The mid-section of the trail features a narrow series of four rocky corners, that will challenge riders. Finally, the trail breaks into a chestnut forest, where the terrain transforms into a grippier, rockier layout with narrower lines for rider’s wheels.

Cavatappi translates to corkscrew, and with good reason. Beginning from the sanctuary of Nostra Signora della Guardia, many may expect a holy experience to kick off this race, but Cavatappi promises a devilishly difficult, though mercifully short challenge for riders. First they must pass through a singletrack jungle portion of the trail, naturally occurring with no artificial engineering, following the shape of the hill. Once through riders enter the namesake area of the trail, composed of twenty rocky, steep corners that corkscrew dizzyingly until the very end of the trail. It’s a rocky, scrubby, slippery course all the way through.

Cromagnon is a reference to Cro-Magnon, the early modern humans of the European Upper Paleolithic, the last portion of the Old Stone Age spanning between 50,000 and 10,000 years ago. Ivo is a trail builder and fossil collector, and Cromagnon is his creation. With a deep respect for the ancient past and an appreciation for beautiful, challenging bike racing trails, Ivo incorporated manmade structures from long ago into the natural features that make up Cromagnon. On the antiquated walls that feature in portions of the trail, Ivo says: “The walls were built to survive forever. They are part of the territory from before 1000. I wanted to bring to light those who, for me, are an artistic part of the frame of this path.” Ivo enjoys bringing the past back to life, and that thought process funnels directly into his trail making. “To find the best place and to decide where a corner has to pass, you have to be very creative and patient at the same time. I always try to rediscover old tracks and then shape them with rocks and earth that are part of the forest,” says Ivo on his trail design philosophy.

Crestino is marked by the familiar wind turbines of an abandoned NATO base, this trail starts high, descending from Melogno, and flowing into a long singletrack that meanders through beech and birch. Terrain and scenery changes mark this grippy, compact, snaking course.

Michele is a local trail builder and mountain bike guide who is the mind behind the next trail. Rocche Gianche is his creation, and it’s intense. Finale is an intricate net of lost trails, just waiting for a trail builder to rediscover them. Michele’s vision for this rebuilt trail was born out of respect for the mountain. He started looking at the old cadastral maps provided by the municipality, which detail the borders of the land and the old roads used by farmers. Here he found what would be reborn as Rocche Gianche, named for the white rocky wall nearby. From the top of the ridge you can see most of the terrain Finale has on offer to the Enduro world, the ride rocky and precarious. Cycling down to the second portion of the trail, riders arrive in a dusty, scrubby section and finally woods.

Starting from the Bric dei Monti with a stunning view of Bergeggi Island, the trail known as Andrassa dips quickly into a fun and fast biking track through a grove of ash trees. Speed is the name of the game here as the trail leads to the Prati dell’ Andrassi, shortly thereafter entering a wooded area of primarily oak, containing several rocky technical sections.