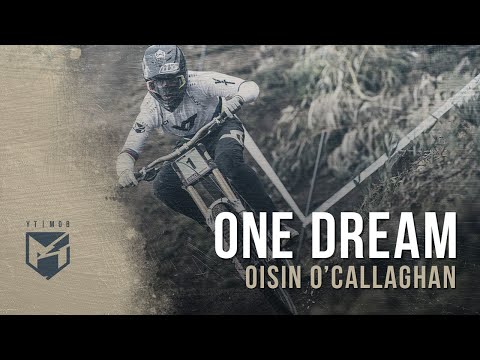 Oisin, first of all, congrats are in order! How have the past weeks been for you?
The past few weeks for me have been the craziest time of my life, from going into my first world-level race just wanting to see where I was with everyone else to end up winning it and becoming Junior World Champion. Then heading to Slovenia to Rounds 1 & 2 of the World Cup and winning both rounds! It’s been crazy but in a good way. It’s what I’ve dreamed of since I’ve been a little kid and to have gone and done what I’ve dreamed of for years is indescribable.

In ‘One Dream’ you say one of your dreams as a kid was becoming World Champion. You achieved that goal in your very first UCI race of the season. What were your thoughts going into the race?
In my head, I would have liked a top 5. That would have been sick. I would have been super happy with that being my first world level race and to see where I would be with the second year juniors so I could work on some things I need to improve on for the next few races.

Did you know at the time, that you are the first Irish mountain bike rider ever to put on the rainbow stripes? How was the reaction at home in Ireland?
At the time, I couldn’t believe that I had done what I had done. So, I had no idea at that moment, but after I was told that no one had ever put on the rainbow stripes from Ireland and that I had made history. The people at home went crazy and I got so many messages my phone was turning off and freezing. I’m excited to get back home to see everyone.

Last year you took part in the YT MOB World Tour. Looking back to where you were then and where you are now, what do you think you have improved most, in which areas have you grown since joining the MOB?
Since joining the YT Mob I have worked on my body position a lot so I can attack more. This is something I practiced a lot over winter, going away for one week at a time. I think it’s much better now but still needs some improvement.

This year was a true rollercoaster ride with races being canceled and your first year of Junior World Cup racing constantly being postponed. How did you keep yourself prepared and what helped you focus?
I had mentally prepared myself for the races to be called off because of COVID so it wasn’t a huge shock to me. This summer I spent all of my time in Europe, mainly in Morzine like I do every summer, to get up to speed. I never really lost focus.

In ‘One Dream’ we see you and your mates on a trail built during lockdown. How big of a role does trail building play in your life and at your home in Ireland?
I don’t do a lot of trail building myself, but I like to give a hand when others are building. During the first lockdown was the first time I’ve gone out to build a track for me to train on because I didn’t have anywhere to ride before. I definitely think I’m going to do a bit more over this winter as I think it’s super fun and relaxing trying to create something that flows really well. The satisfaction you get when you ride something you built yourself is so good.

You are quite heavily involved with a local trail center. Can you tell us more about the development and which role the trail center has played in your growth as a rider?
Ever since I was super young I’ve been going up there with my friends and just having fun riding the trails. In my local trail center is where I probably learned nearly every skill I have.

What do your goals look like now that you already wear the rainbow stripes? What will motivate the reigning World Champion?
I want to win the World Cup overall. Obviously, I missed an opportunity in Lousã, so I’ll be really gunning for that title next year. To defend my title as Junior World Champion next year would also be so good.

All the best Oisin!