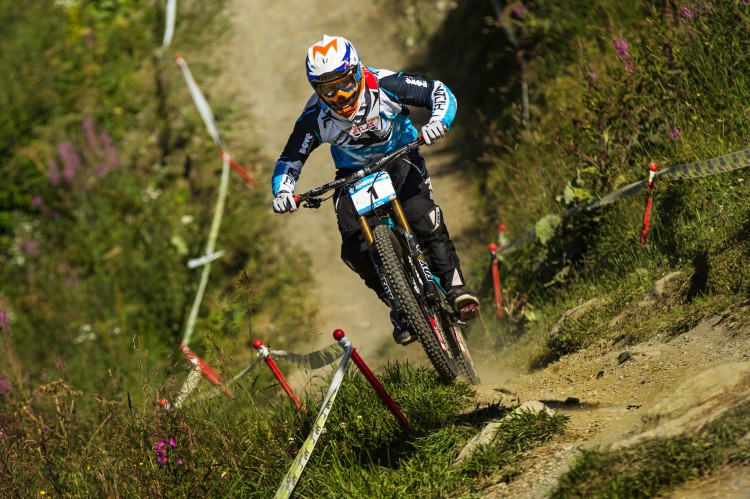 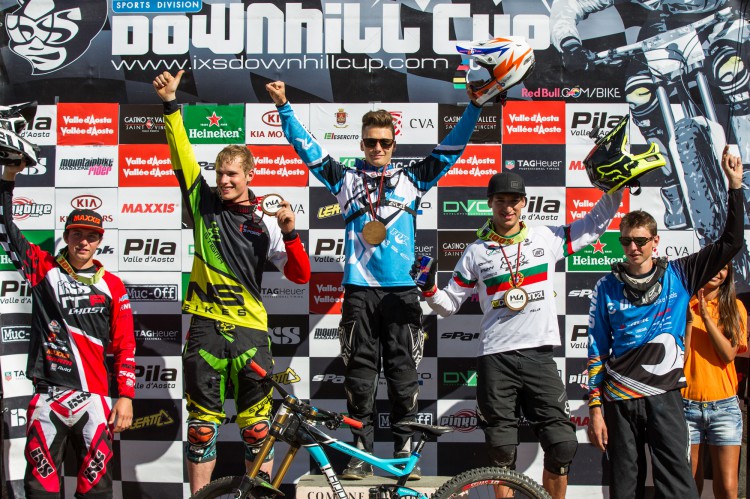 In round 6 of the iXS European Downhill Cup, Manuel Gruber and Tahnée Seagrave dominated a field of more than 300 riders from 24 different nations. Great weather conditions and an incredible view made it a perfect weekend for a downhill race!

The season has only just begun, but is already headed straight towards its final round. At the EDC’s last stop in Italy before the finals, Pila once more proved to be an absolute highlight of the season. The village at 1800 meters above sea-level provides a breathtaking view of Aosta, the Monterosa, the Matterhorn and the Mont Blanc – and all at the same time! However, it was not only the panorama that lured hundreds of people to the mountains this weekend: more than 300 riders from 24 different nations made their way to Pila to fight for the title at a course that already played host to the Downhill World Cup.

A former World Cup track is of course far from easy. With 2600 meters in length and an additional 520-meter difference in altitude the track has a lot on offer, but also demands a lot from every single rider. The former World Cup Pro Corrado Herin once more designed a track that is definitely worthy of a European Cup: twists and turns, roots and stones, jumps and slopes – the definition of pure fun!

Under a bright and shining sun the riders were extremely fast already in Saturday’s seeding run. In the Elite Women category last year’s winner Tahnée Seagrave (GBR – FMD Racing) made clear that she would not voluntarily hand over her title. She was the clear favorite of the weekend right from the start with a really fast time of only 4:28.432 minutes and an incredible 17-second lead on Saturday.

On Sunday the weather was still at its best, the conditions of the track still the same and the last training sessions seemed to be a matter of routine while searching for the fastest lines.

In the Masters category, Benjamin Herold (GER – NRG-Foes Racing Factory Team) did it again! He clearly dominated his category and took the title and some more points for the rankings. Kristof Lenssens (BEL – Kona Barracuda Fox) and Paolo Alleva (ITA – Scout/Nukeproof) completed the podium.

The result of the Elite Women category was rather a déja-vu than a surprise: Tahnée Seagrave set the exact same time as in her seeding run with almost as big a lead and also the second and third place didn’t change at all. In the end, Tahnée Seagrave succeeded, followed by Alia Marcellini (ITA – LeeCougan Dirty Factory Team) and Carina Cappellari (SUI – Suspension Center).

Nevertheless, it once more got really exciting at the end of the day in the Elite Men category, the question being: Would anyone cross the 4-minute mark this weekend?

The first rider who occupied the Red Bull Hot Seat for a longer period of time was Jaques Bouvet (GER – Team Bulls), before the South African vice champion Tiaan Odendaal (RSA – Green Team) came down the hill even faster, setting a new best time of 4:02.222 minutes. However, the first rider to beat Strasser’s seeding best time was Harry Molloy (GBR – RRP Ghost) with 4:02.222 minutes. When Francisco Marques Pardal (POR – Penacova DH) came down the hill, he was faster than Molloy, but still not faster than 4 minutes. Then, Manuel Gruber (AUT – Radon Factory DH) finally set a best time under 4 minutes, took a seat in the Red Bull Hot Seat and witnessed the last two riders speeding down the hill, eager to beat his time. But in the end, neither Slawomir Lukasik (POL – NSbikes FroPro) nor Benny Strasser were able to take over the lead and Gruber took the title with a time of 3:59.523 minutes followed by Slawomir Lukasik and Francisco Marques Pardal.

Another round of the iXS EDC is in the books and some more points were added to the overall standings. Manuel Gruber is getting closer to the leader of the rankings David Trummer (AUT – RRP Ghost), who ended up in 24th place this weekend. In the Elite Women category Jana Bartova (CZE – Bikeplac Racing) and Zarja Cernilogar (SLO – Blackthorn GT) enjoyed a free weekend and took some time to relax, while Tahnée Seagrave took her chance to climb up the ladder to the third place of the current rankings. After this weekend, there is still no overall winner in both categories, which means that it definitely will get interesting in Leogang’s season finals!  For more information, visit www.ixsdownhillcup.com