Renaissance men Matthys Beukes and Philip Buys shrugged off a disastrous first five days to win The Queen Stage of the Absa Cape Epic from Oak Valley Estate to Stellenbosch University. The PYGA Euro Steel pair is the first South African team to stand on the top step of an Absa Cape Epic stage podium since they performed the same feat way back in 2015.
Quite poetically they were racing for Scott Factory Racing back then. On Friday, Buys and Beukes finished just ahead of Scott-SRAM MTB-Racing, who rode their way back into the Yellow Jerseys and a 5:13 buffer on overnight GC leaders Cannondale Factory Racing. 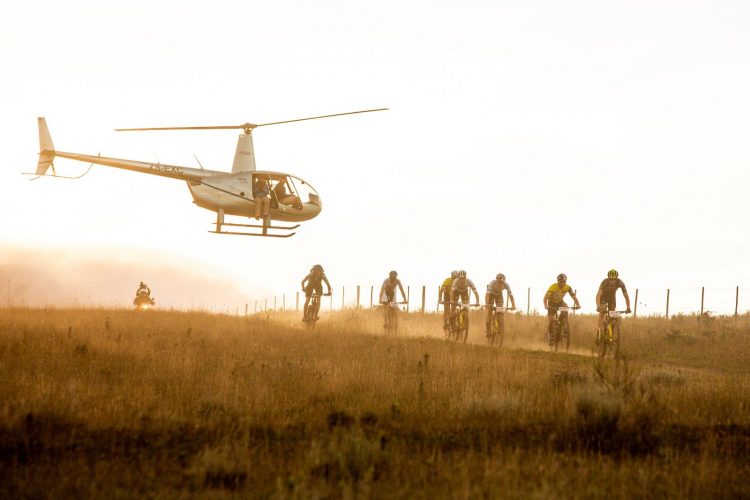 With his wife and daughter at the finish, an emotional Beukes confirmed that this victory was indeed that much sweeter than Stage 4 in 2015.
“This is really special after quite a disappointing race so far,” he said. “We came here with an overall podium as a goal, but it didn’t quite work out.”
According to Beukes they took it easy on the Time Trial and decided to target a stage in the last three days. “To do it on the Queen Stage is amazing,” Beukes confirmed adding that it was by no means easy.
“To be honest I didn’t feel that great today with dead legs from the start this morning.”
“I had to dig so deep and it was just a mental thing to keep suffering and not give up and I’m really proud that we won that battle.”
Indeed, the flagship stage lived up to its moniker and provided no shortage of action and drama. In the Men’s race it started right from the gun at Oak Valley Estate, when Henrique Avancini of Cannondale Factory Racing went out hard. The usual suspects went with him including KROSS-SPUR (who claimed yet another Dimension Data Hotspot).
By the first water point at Eikenhof Dam (24-kilometres in), KROSS-SPUR had blown and Scott-SRAM MTB-Racing and Pyga Euro Steel were out in front. They duly controlled the race from there. 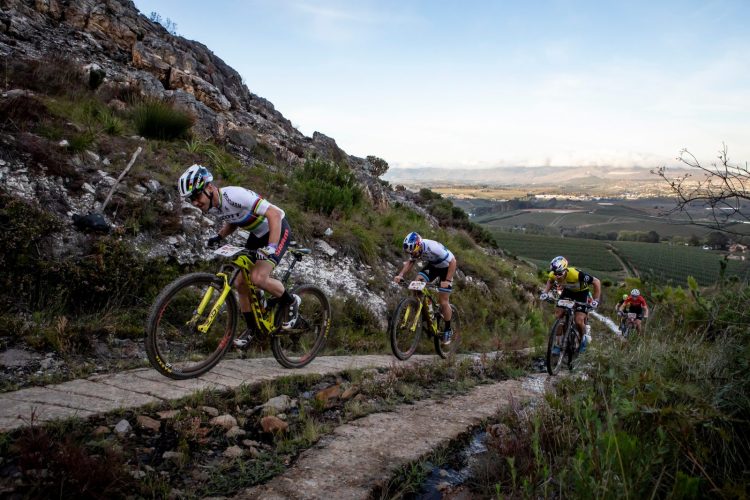 “The plan was to make it hard from the beginning and put the pressure on Cannondale,” Nino Schurter said afterward, explaining how they got away early only for Lars Forster to puncture. “We lost some time, but managed well and then we had the perfect situation in the front with Pyga.”
“They are racing for the (Absa African) Red Jersey and we are racing for the Yellow,” he said.
“It was nice to spend the day out with them,” Phil Buys agreed. “The plan was to be in the front, but to be up there with the World Champ and the European Champ was great.”
Downplaying the gravity of the occasion too was Trek Selle San Marco who took third on the day, further solidifying their spot on the GC podium. “We had to stop at the tech zone and change a saddle,” said Samuele Porro, explaining how they felt strong on the King’s Climb and made back all their time there. 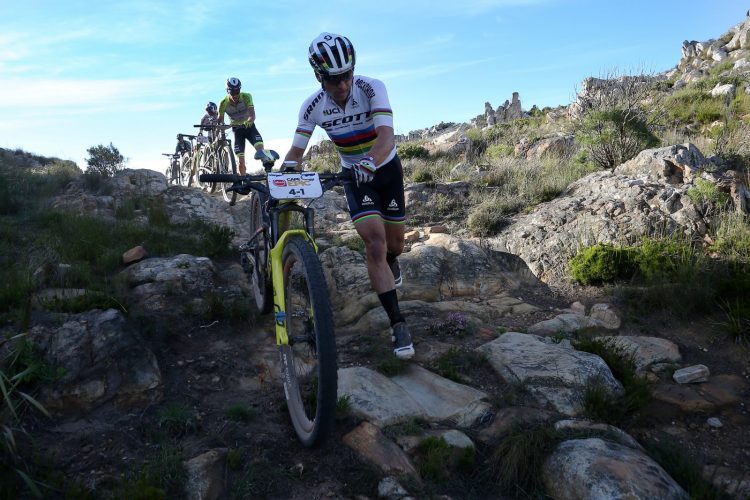 Overnight Yellow Jersey wearers Cannondale Factory Racing had a tough day out. Despite’s Avancini’s early surges the ever-popular pair took a few tumbles and resorted to a day of defence in order to limit their losses. Fumic had to dig particularly deep. They would eventually finish fourth on the Coetzenberg sports fields at Stellenbosch University.
Their crash was indicative of a day filled with spills as the fatigue toll started setting in across the field. Cannondale Factory Racing live to fight another day however, not so fortunate are Centurion Vaude. Jochen Kaess had a race-ending crash which saw him unable to continue.
Centurion Vaude’s demise saw SpecializedFoundationNAD Alan Hatherly and Matthew Beers move up into fifth place on GC. They remain firmly in the Absa African Men’s Jersey after another solid performance. Saturday’s penultimate stage is bound to be another brutal challenge with 2 650 metres of climbing over 89 kilometres. 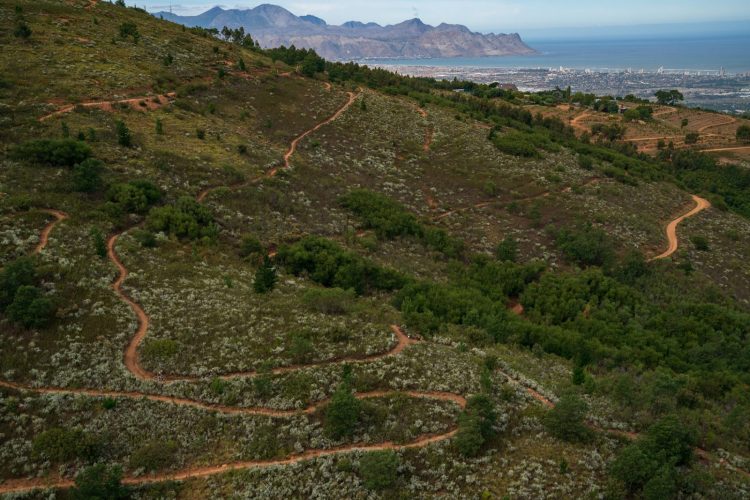 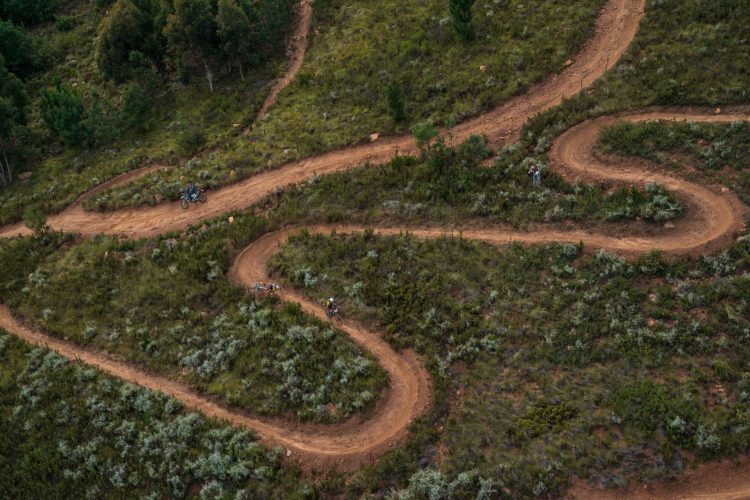 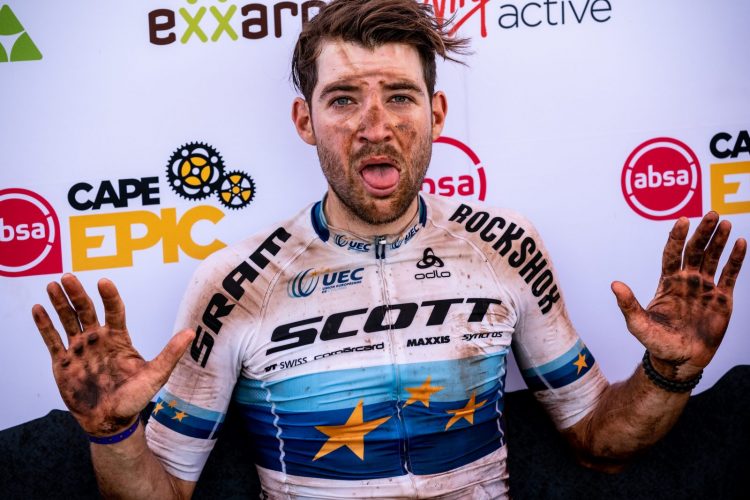 South African Candice Lill and her German partner Adelheid Morath became the Queens of the Queen Stage when they won the 100km Stage 5 from Oak Valley Estate to Stellenbosch University on Friday.

The Summit Fin pair were able to temporarily halt the victory march of the Investec-songo-Specialized team of World Champions Annika Langvad and Anna van der Breggen who had convincingly won every other day of racing.

Lill and Morath finished the stage in a time of 5:20:42, just over four minutes ahead of Langvad and Van der Breggen, with Silverback-Fairtree’s Jennie Stenerhag and Mariske Strauss finishing third, seven minutes further back – despite a big crash for Strauss when a rider went down in front of her near the finish.

Going into Saturday’s and Sunday’s final 159km of racing, the Investec-songo-Specialized duo still hold a 21-minute lead over Lill and Morath with Ariane Lüthi and Maja Wloszczowska (Kross-Spur Racing) third, another 30 minutes further back. 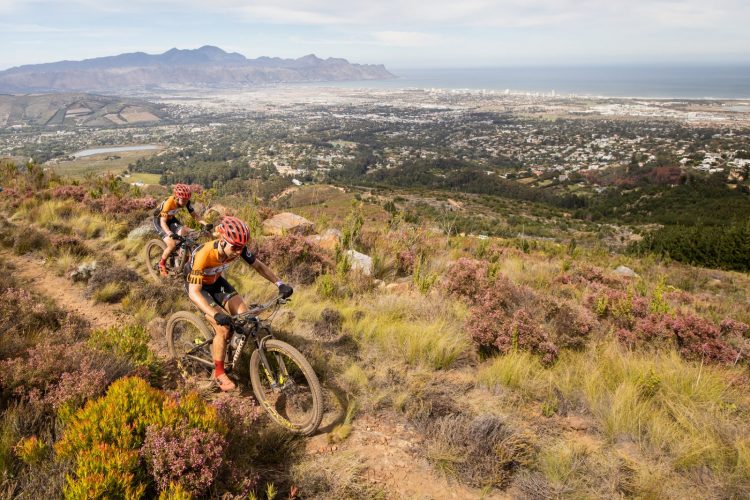 Lill and Morath broke away with the race leaders soon after the start and at the first water point the two teams had already established a significant lead over their rivals. Van der Breggen then crashed and punctured which meant the South African and her German partner were able to build a two-minute lead at the halfway point.

With Van der Breggen struggling to get back into a rhythm after her crash and the compulsory portage down the Gantouw Pass, Investec-songo-Specialized opted to ride a steady pace and minimise their losses. Their decision to back off from chasing the stage win allowed Summit Fin to double their lead to the finish.

“It was very hard out there today,” said Lill after the finish. “Those little bumps on the route profile never seemed to end. It just felt like non-stop climbing today.

“Anna had a crash in front of me on an early descent and we got a gap and then just kept it steady until the end.”
The South African was very pleased to have made it a double win for South Africa, in both the Men’s and Women’s categories, on the Queen Stage. 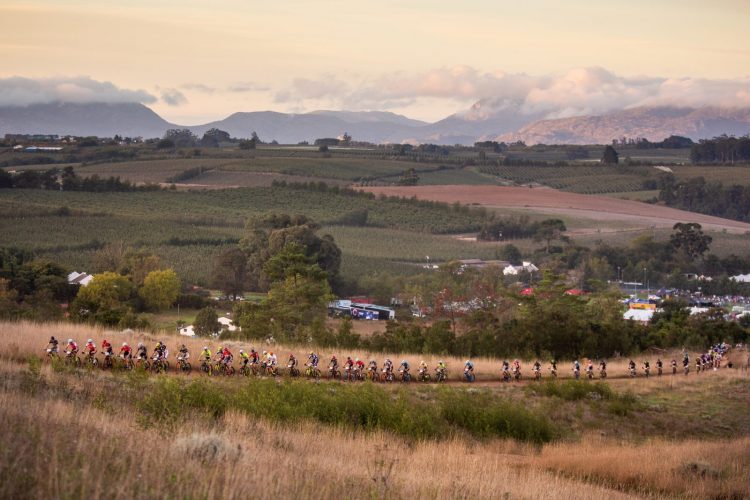 “The spectators were amazing out there … they really got me through today. It is awesome for South Africa with Matthys Beukes and Philip Buys winning too. With Stellenbosch being a cycling hub for South Africa, there were so many spectators out there – I got tears in my eyes with them all shouting for me.

“We did not expect to win the stage. We knew the climbing suited us, but Annika and Anna are a pretty formidable pair, so to pull off this win is pretty special.”

Van der Breggen had no obvious reason for her struggles after the Investec-songo-Specialized dominance before Friday.

In the race for the Absa African Women’s Jersey, Theresa Ralph and Sarah Hill of team Galileo Risk finished the stage as the sixth women overall and maintained their big lead in the competition.

Saturday’s penultimate stage starts and finishes in Stellenbosch and sees riders complete an 89km out-and-back course on the trails around the historic town. 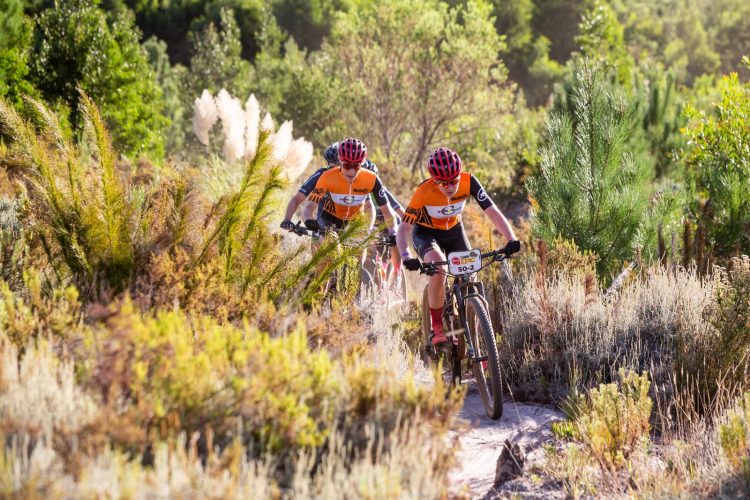 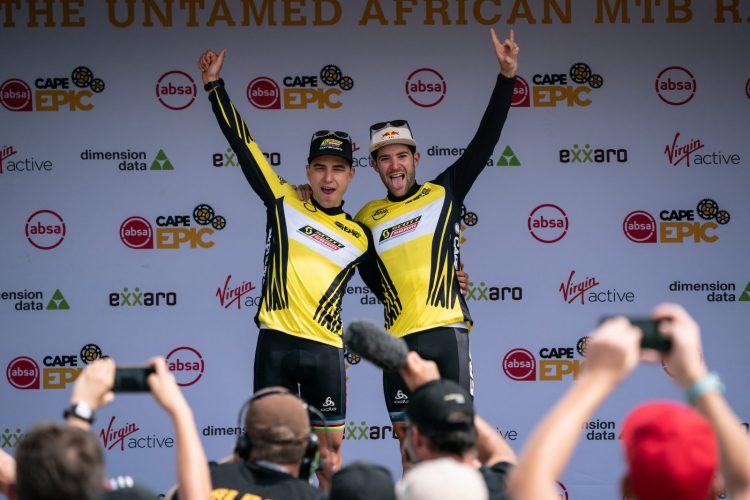