Team Scott-SRAM MTB-Racing won the Prologue of the 2019 Absa Cape Epic on the slopes of Table Mountain ahead of Cannondale Factory Racing and KROSS-SPUR on Sunday 17 March. Cross country specialists, Nino Schurter and Lars Forster finished in a time of 00:43:41.5, some 41 seconds ahead of Manuel Fumic and Henrique Avancini to claim the Yellow Leader’s Jersey.

Conditions on the day were cloudy and cool with some rain early on, making for fast racing (the winning time was two minutes faster than in 2018) but also producing a few bumps, bruises and upsets. “The course suited us quite well,” commented 32-year-old Schurter, who won the 2017 Absa Cape Epic with Matthias Stirnemann. 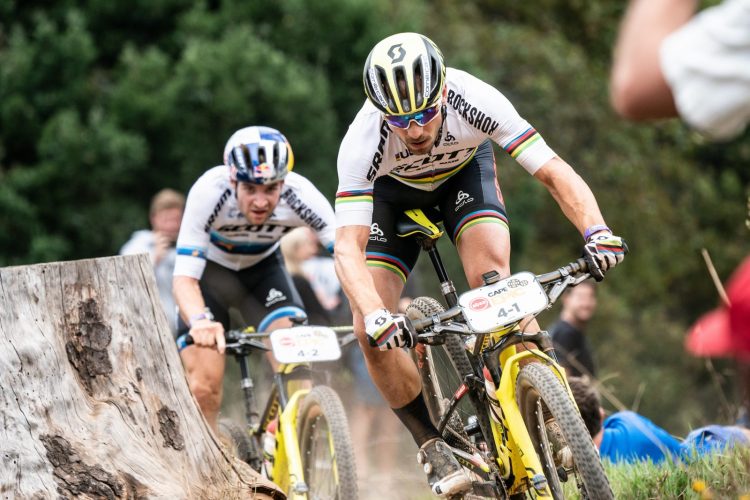 The multiple World and World Cup champion is racing with Swiss compatriot and Absa Cape Epic debutant, Lars Forster, this year. “We are cross country racers and this is our strength, so we are very happy with the win,” he said.

Before quickly adding, “we want to win the whole race, so hopefully everything goes according to plan for the next seven days.”

Forster, who was announced only last week as Schurter’s partner after Andri Frischknecht took ill with a stomach bug, was equally pleased with the result.

According to Forster the climb up to Dead Man’s Tree proved tough and pushed him into the red. “I was a good 20 Watts over,” he joked afterward. “Luckily Nino’s horsepower on the flats was super hard, so I could sit in and rest there.”

Forster then lead Schurter down the Land Rover Technical Terrain section on the infamous Plum Pudding. At this point the pair had a lead of around 12 seconds, a gap they had already built up at the second time check on the 20-kilometre route, which featured some 600 metres of climbing.

For most of the five time checks, they were followed closely by the South African SpecializedFoundationNAD pairing of Matt Beers and Alan Hatherly, before disaster struck less than two kilometres from the finish, in the form of a puncture. The setback saw them eventually finish fifth overall, behind Cannondale Factory, KROSS-SPUR and 7C CBZ WILIER.

“Bit of a lapse of concentration there,” said Matt Beers afterward. “We were going super hard and I hit a rock. It was close to home so we decided to just nurse it home for the final two kays,” he said. 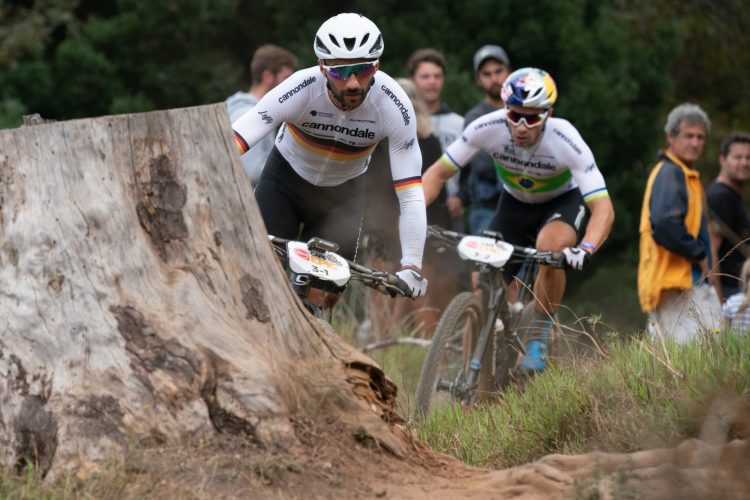 “Just bad luck at the end,” said teammate Alan Hatherly. “With us being the last 10 teams to go the course changed a lot from when we pre-rode it, and there were far more exposed rocks. One of which claimed Matt’s rear tyre.”

“We stayed calm and limited our losses and are happy to wear the Absa African Red Jersey, all things considered,” he said.

The popular Cannondale Factory pairing of Manuel Fumic and Henrique Avancini had a great day out, much to the delight of the local fans who lined the route, despite the unseasonably cold and wet weather. “We showed today that our form is in a good place and I am really happy how we went,” commented Henrique Avancini, who arrived in the country only this week, after some extensive travel delays. “We are in a good place for the rest of the week, let’s see how it all goes,” he said.

Perhaps the biggest surprise of the day was the eighth place finish of the much-touted Investec-songo-Specialized pairing of defending champion Jaroslav Kulhavy and debutant, Sam Gaze. They are some two minutes back, time which could easily be made up on Monday’s Stage 1 over 111 kilometres on a challenging route around Hermanus. The stage features some 2700 metres of climbing and takes in some of the old icons of the Absa Cape Epic, including Rotary Drive, the La Vierge stairs and the Katkloof Climb, among others. Mountain biking World Champion Annika Langvad and her road riding World and Olympic Champion partner Anna van der Breggen put down a marker in the opening Prologue of the Absa Cape Epic at the University of Cape Town on Sunday.

The Investec-songo-Specialized pair removed any doubt they are going to be the team to beat this week as they powered along the slopes of Table Mountain and completed the 20km stage in a time of 51 minutes and 44 seconds. They will take a big two-minute 35-second lead into Stage 1 which starts and finishes in Hermanus on Monday.
Ariane Lüthi, who partnered Langvad to three Absa cape Epic wins, and Maja Wloszczowska from the Kross-Spur Racing team ended second in the Prologue, with Summit Fin’s Candice Lill and Adelheid Morath third, 14 seconds further back.

Langvad and Van der Breggen were the final pairing from the elite women’s race to set off in the time trial format and it was quickly obvious they were the team to beat. When they passed the first intermediate timing point after just six kilometres they had already negotiated the early climbs a massive 66 seconds quicker than any of their rivals.
Effectively the Danish and Dutch World Champions had reduced the stage – and probably the entire event – to a race for second within six kilometres. At the highest point of Sunday’s stage, after 16km and just before the riders began the more technical downhill sections back to the finish, Langvad and Van der Breggen had doubled that lead to over two minutes, giving them a cushion to ride a controlled descent back to the start/finish.

They made sure there were no mistakes and crossed the line with a healthy, morale-boosting lead over all their rivals.

“I think it is the hardest and fastest Prologue I have ever done at the Absa Cape Epic.”

Van der Breggen was relieved and pleased to have the Prologue behind her.

“It is nice it has finally started … and it started in a nice way,” said the 2016 Olympic Champion. “Today was better than we expected, but we have seven more days to go and we will have to see what is coming up.”

As a road rider there were question marks over Van der Breggen’s speed in the technical sections but the current Road World Champion has established her credentials and was even lamenting the fact she had to slow down at times.

“I liked the Land Rover Technical Terrain today, but they are not the most technical sections of the whole race,” said Van der Breggen. “For me the technical sections are quite difficult because I want to go fast always. On a road bike you can always go fast, but here you can go too fast so I have to get used to taking some speed off sometimes. At least with Annika I absolutely have one of the best to follow and she can show me what to do.” There was also some drama in the Absa African Women’s Jersey with dormakaba Ladies team of Sam Sanders and Amy McDougall claiming the stage win over Land Rover Jaguars pairing of Hannele Steyn and Katja Steenkamp.
Sanders and McDougall will take a 33-second lead into Stage One on Monday after the Galileo Risk team of Theresa Ralph and Sarah Hill were penalised 30 minutes for drafting.

While Sunday’s 20km stage on the slopes of Table Mountain National Park was a test of speed and climbing strength, Monday’s Stage 1 will be place more emphasis on endurance with the 111km ride including 2700m of climbing.