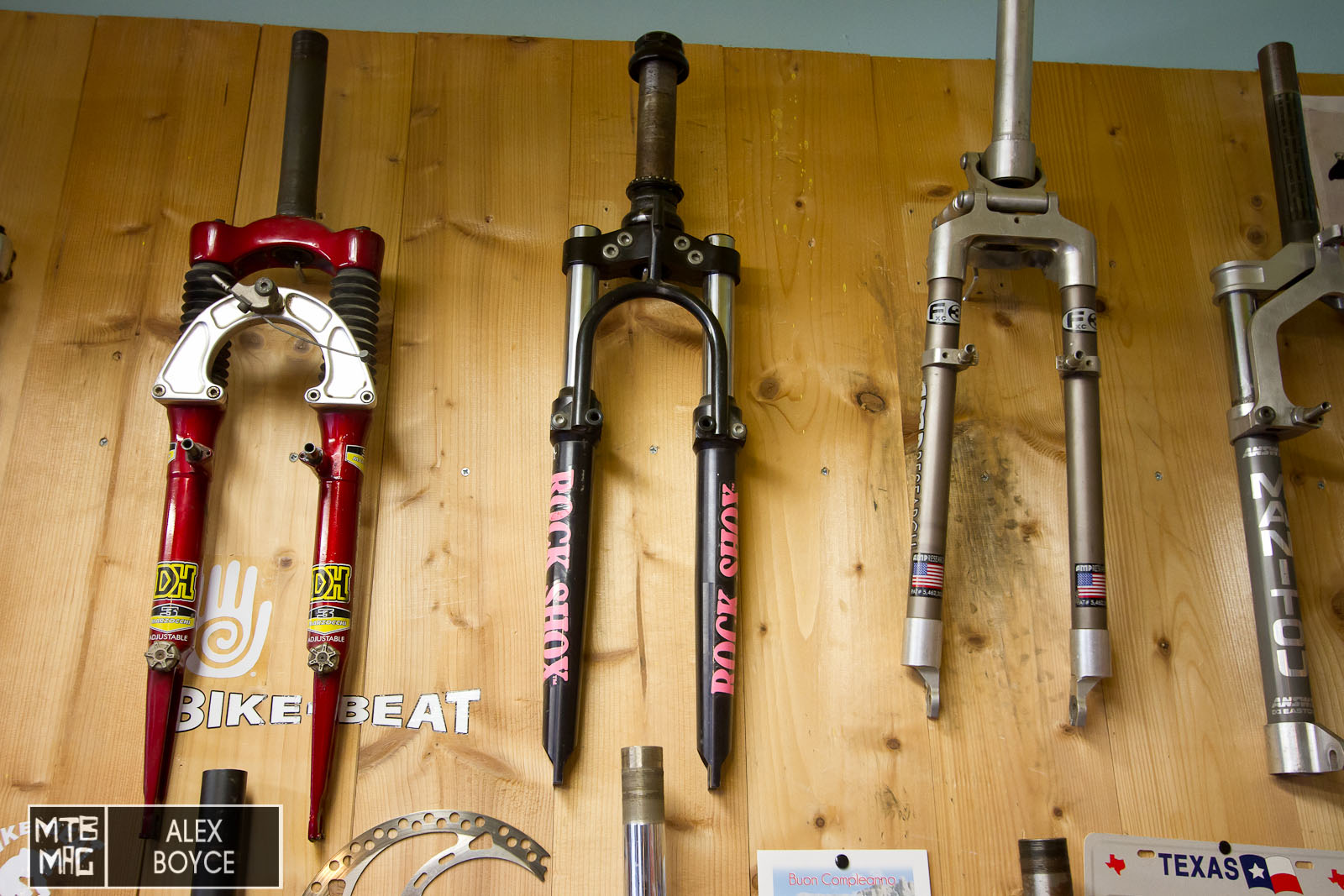 When travelling around as a journalist a keen eye is often required to spot the latest things and products that are in the works, sometimes though that keen eye notices a few other things, in this case a collection of historic suspension forks hanging up on the back wall of a bike shop. Antonio Pucci, Bike Beat owner and a dedicated mountain biker gave us a small tour of his suspension forks and a bit of history/technical information about them. 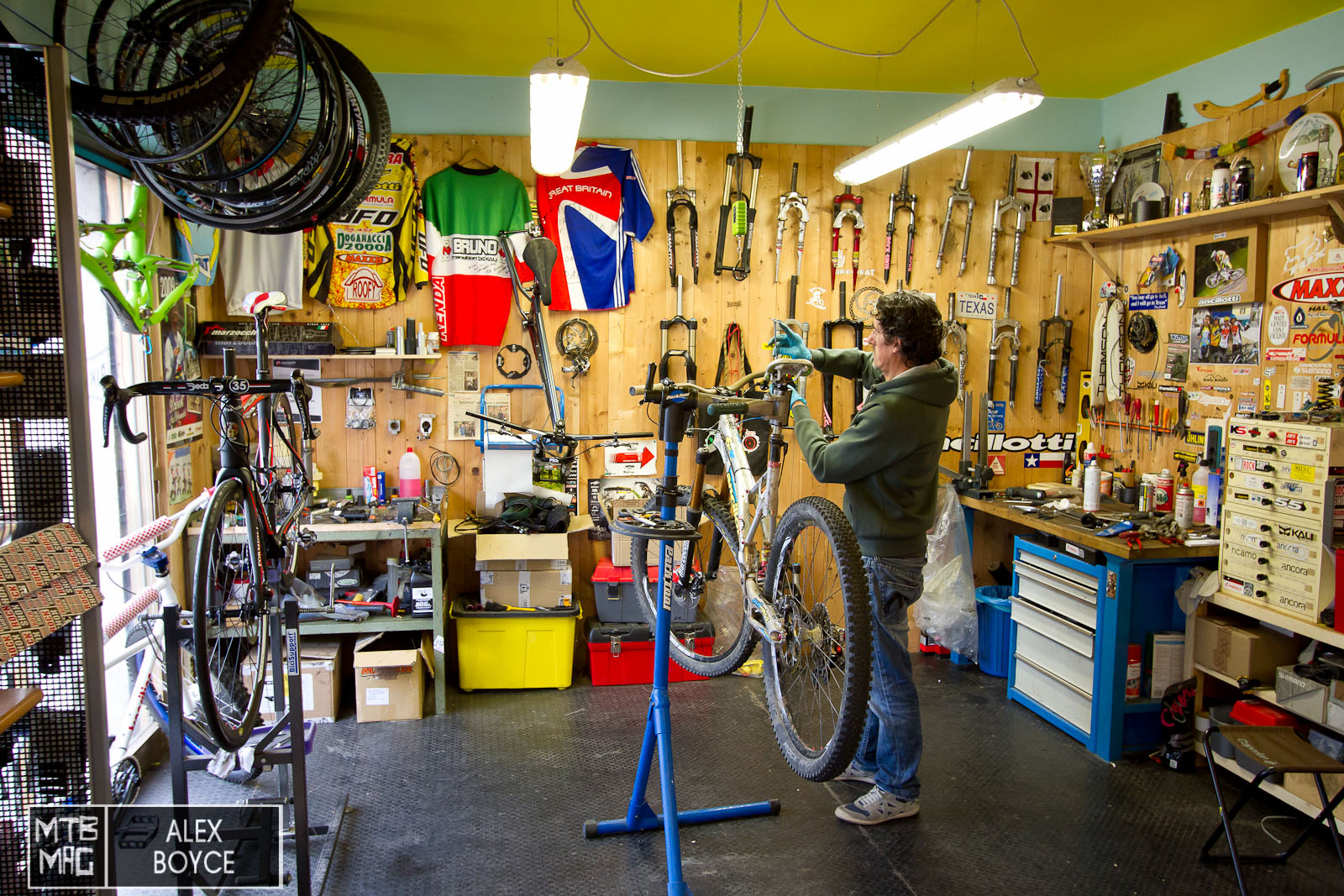 Bike Beat seems like a normal bike shop until you look on the back wall which displays a few elements of history.

A small hall of fame with some interesting models behind.

These three forks were the ones that caught our eyes. 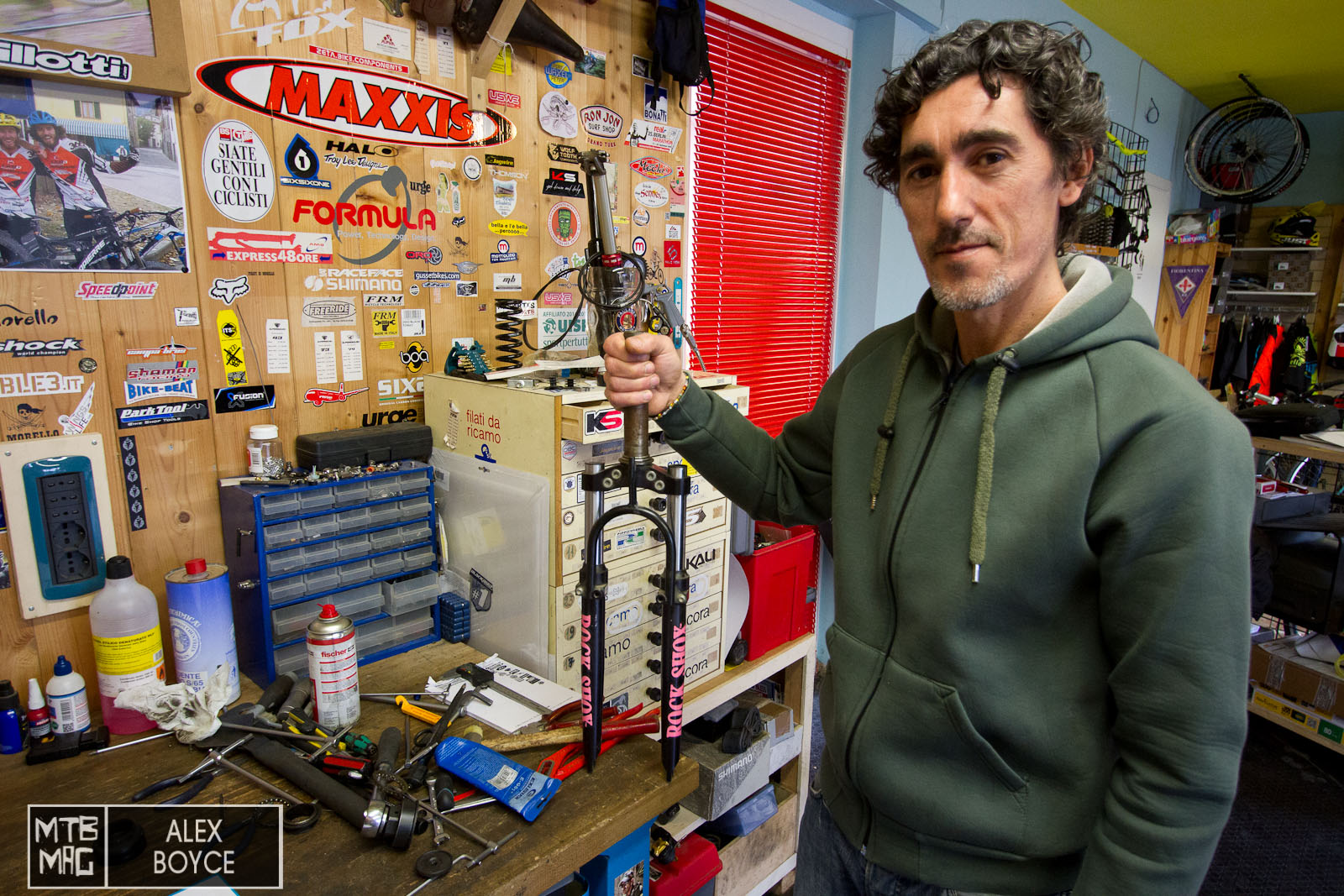 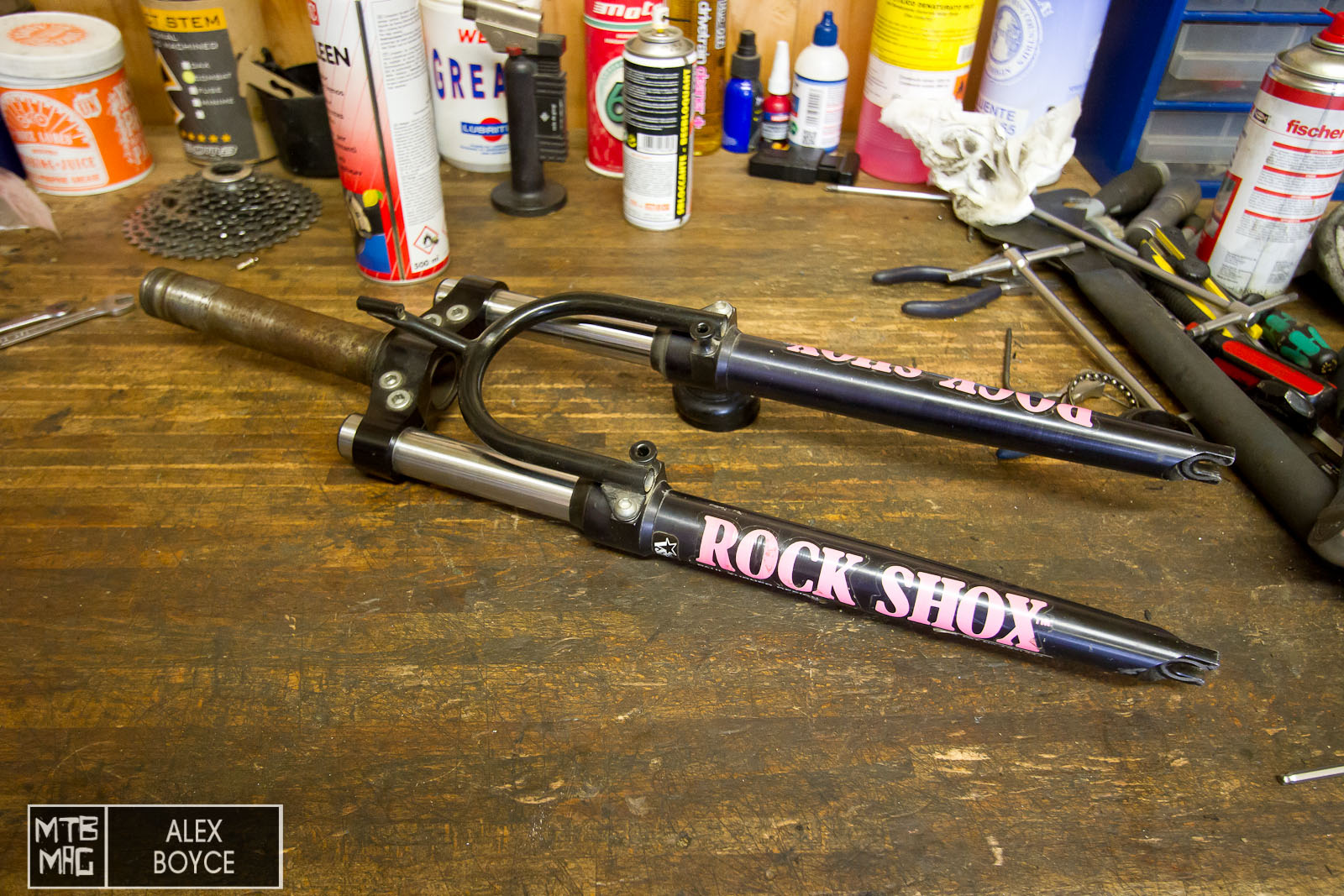 Antonio Pucci has owned this fork since day one.

This is where it all started and the evolution of forks began. Antonio told us he bought his RS-1 in 1991/1992 for 1,000,000 Lira which in today’s money is about €1500-€2000 euro when adjusted for inflation. His personal RS-1 has been with him ever since and still has the original oil in it. The fork also still works perfectly, which he showed us.

Considering it was one of the first forks produced it still felt very plush, and had it’s full range of travel which was about 48mm.  Antonio’s fork weighed in at around 1.5kilos which for it’s day was a very light weight fork. The steerer was a 1 1/4″ diameter with the legs being 25.4 mm  in (1″) diameter, very thin compared to a modern day fork. Antonio originally had the fork mounted on a Marin Titanium frame which he had to buy in the USA back in the day.  He recalled how it had a Tioga disc drive wheel, and Graft brakes. Back then he said he spent about 10,000,000 Lira, which is around 10,000 Euros in today’s money. Local riding was scant with only about 15 riders on their local hill between 1992 and 2002 so the easy availability of components back then was not as it is today. If you wanted a special bike you had to really go out and look for the parts. Antonio said he has never rebuilt the fork, after almost 23 years. Also worth noting is there is no rebound or compression controls, and the brace, well stiffness was not top of the list at the time. 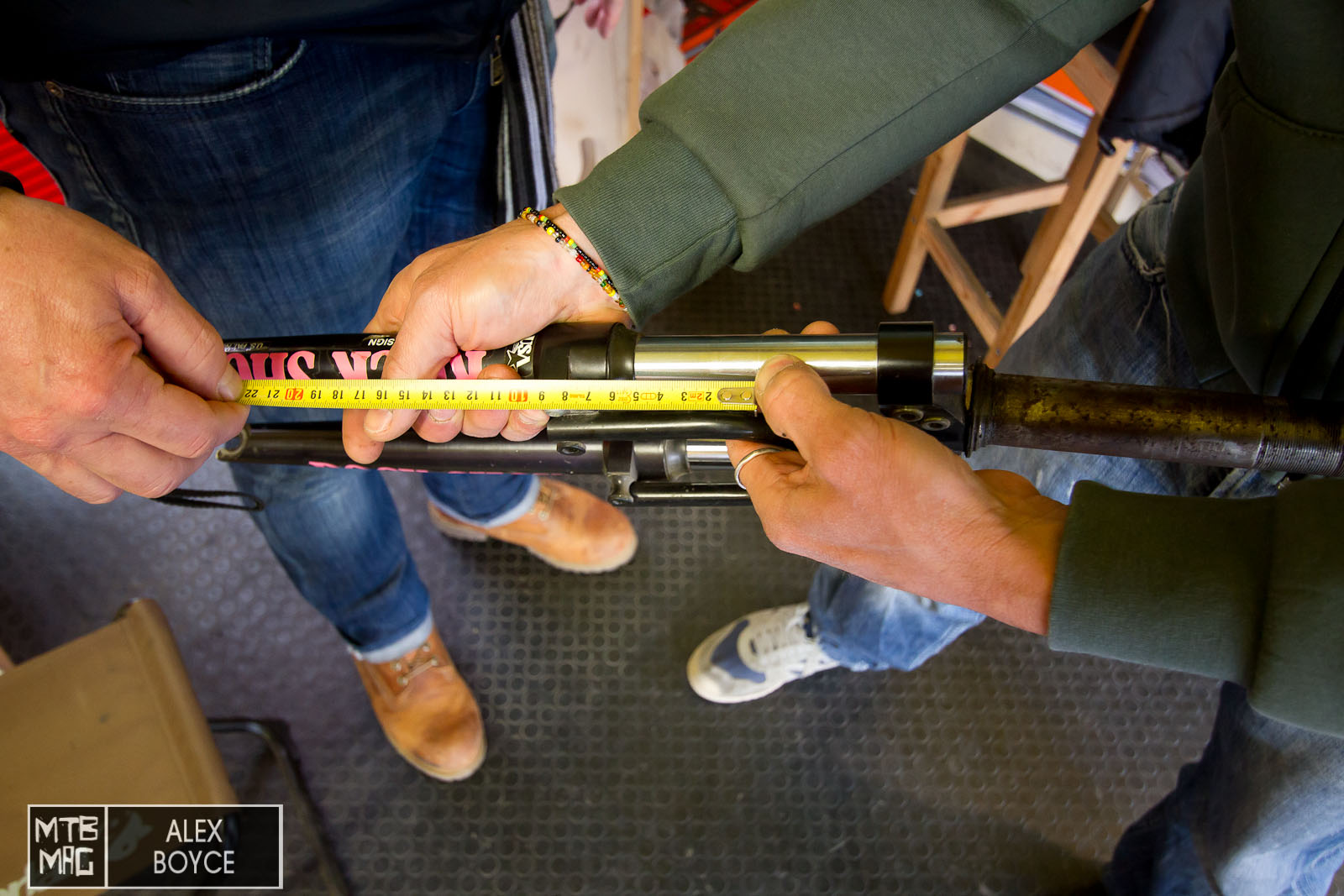 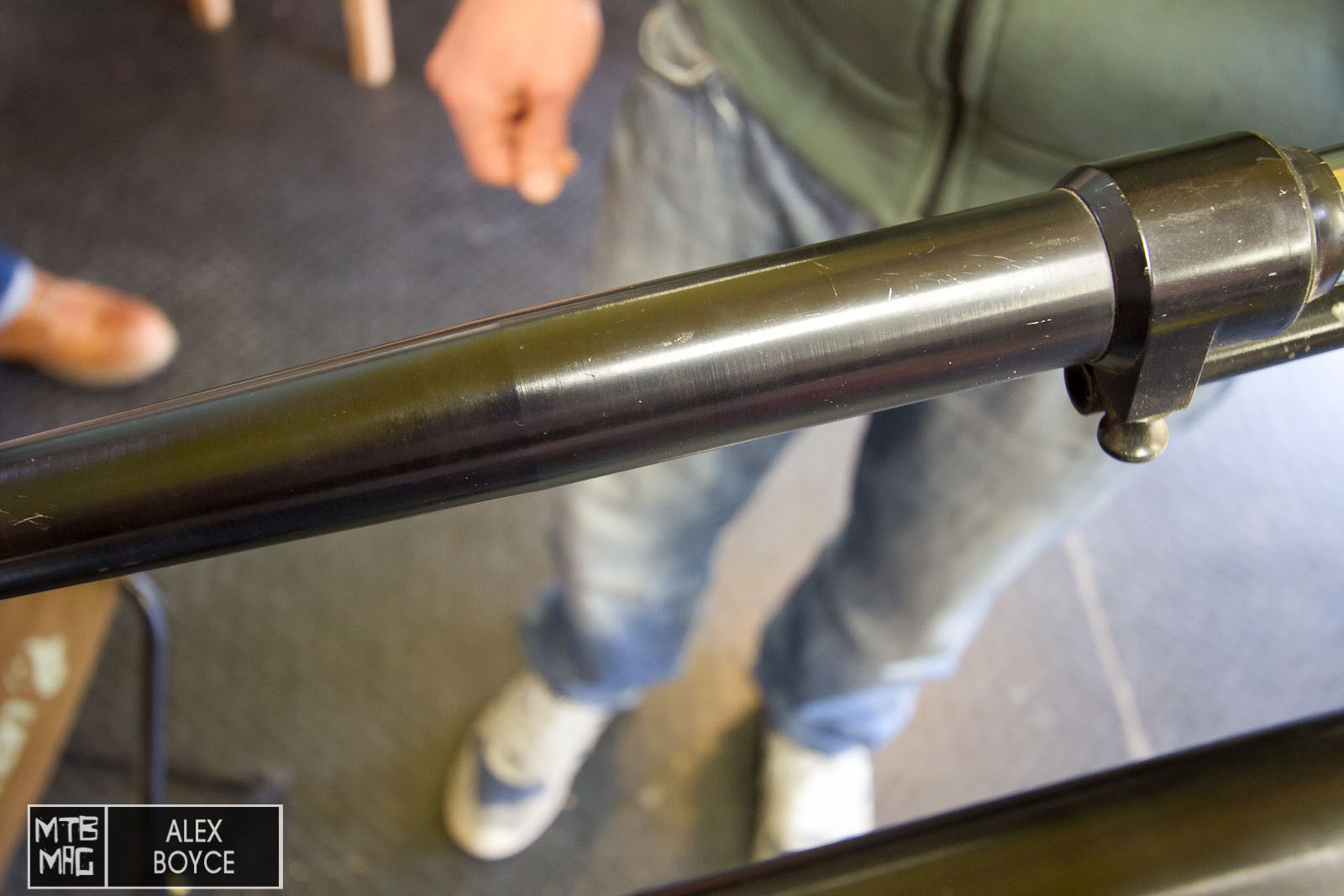 The first forks were apparently hand made and it is possible to see how even the fork lowers where machined by CNC from lumps of metal to shave weight off. 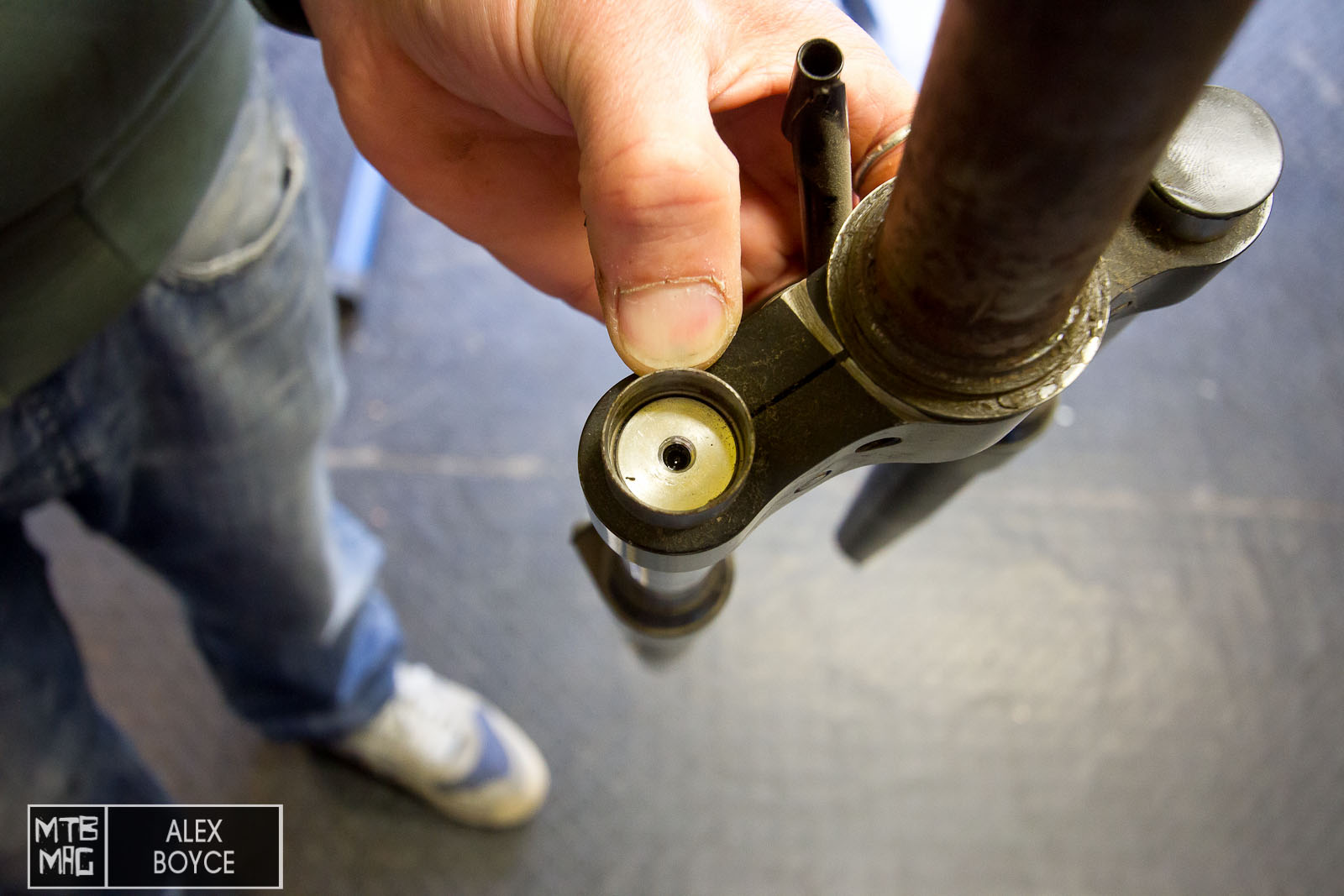 The air and oil together in the legs, here they are inflated by a syringe. 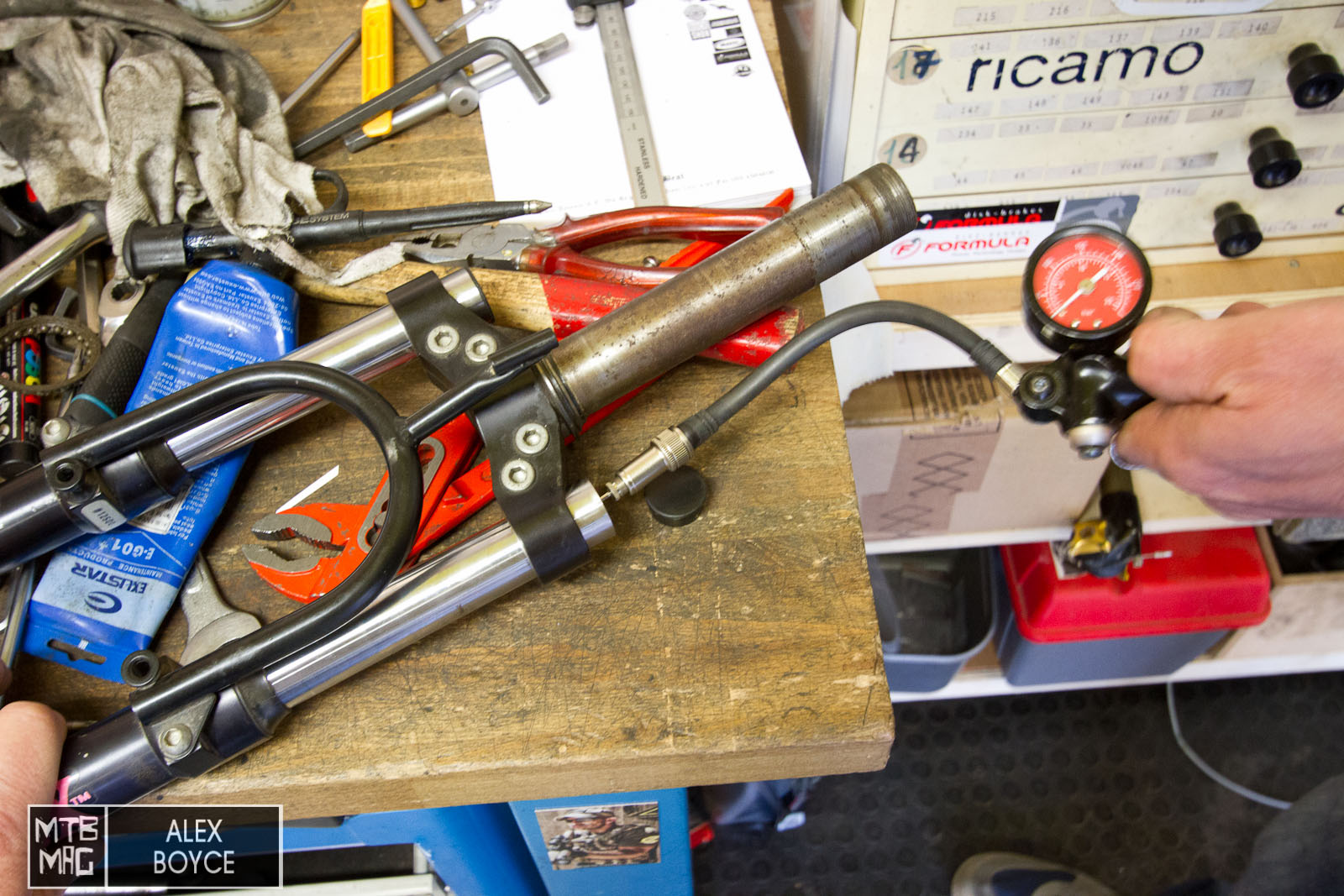 How to inflate the fork, the original pump is around somewhere apparently.. 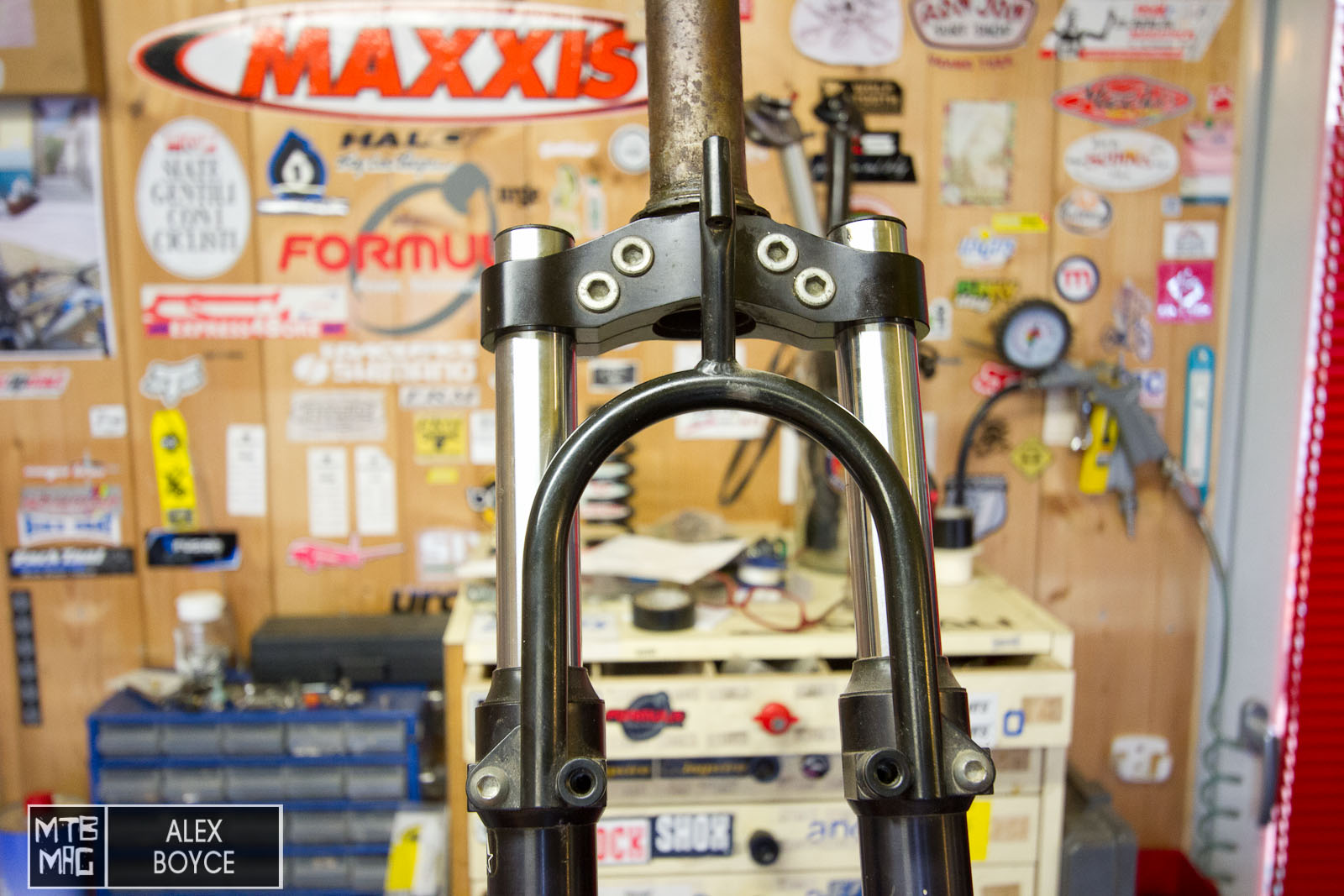 The upper part of the fork shows removable legs, brace, and steerer tube. Plus the cantilever brake bosses. 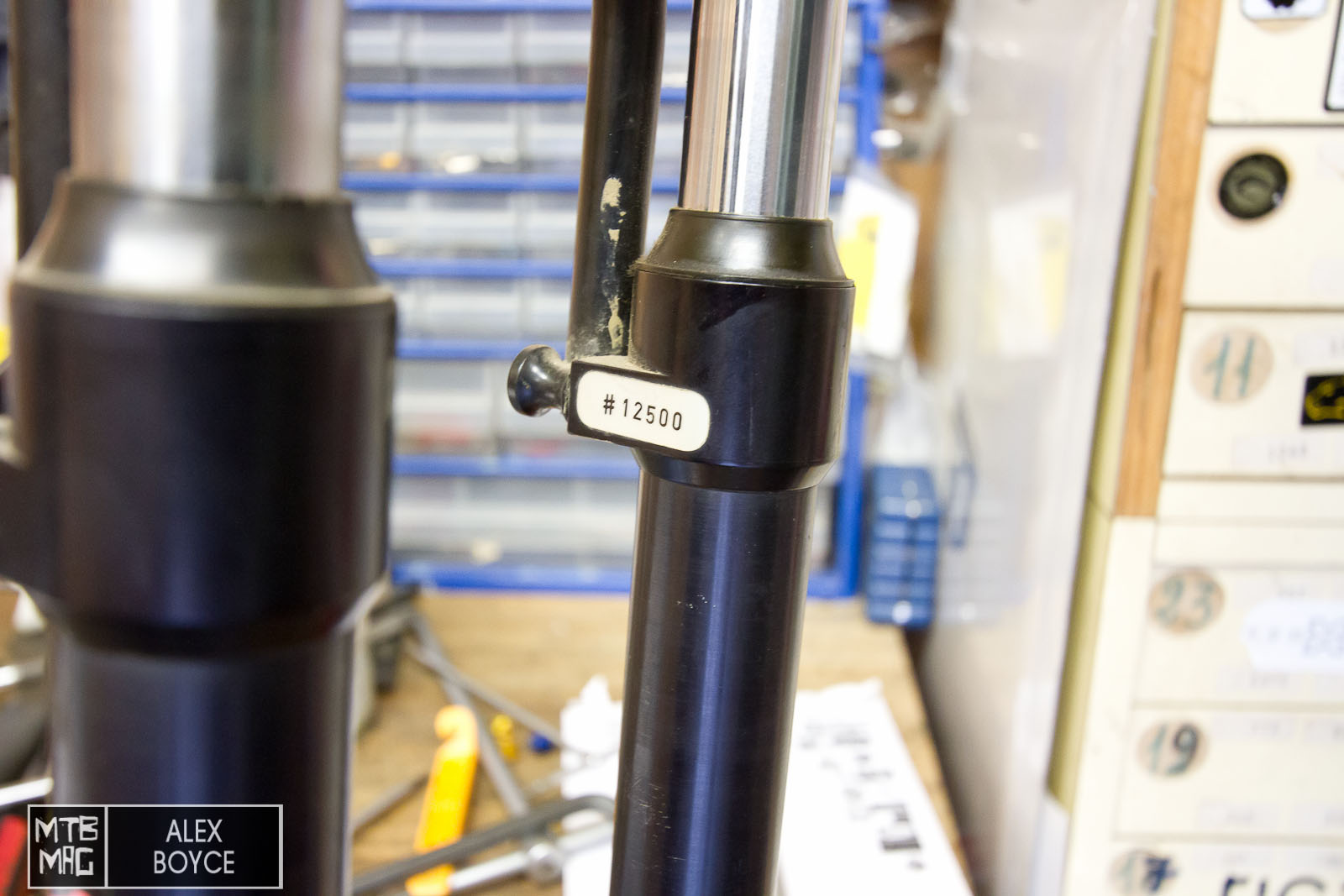 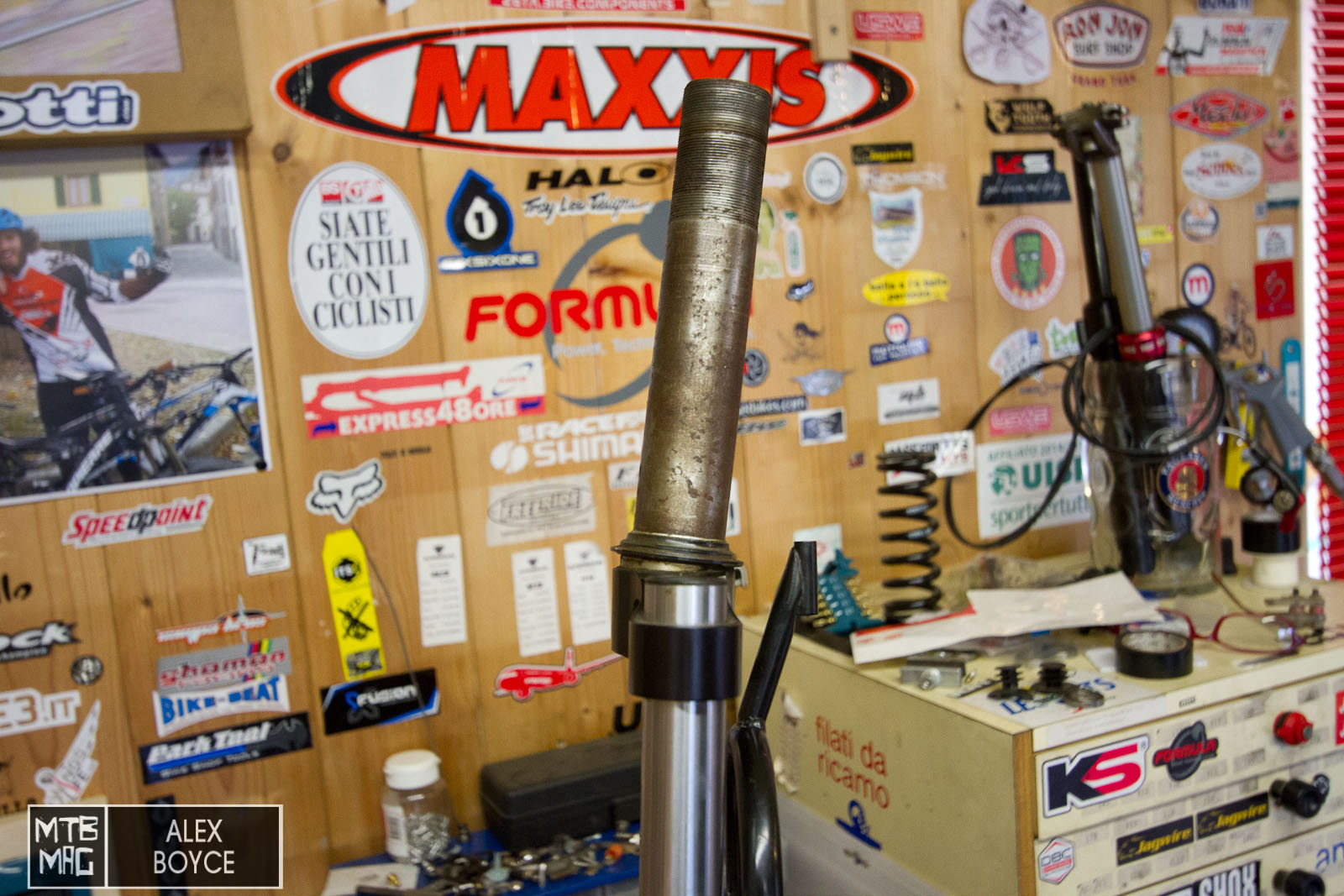 The steerer tubes were cranked in order to allow the wheel offset and geometry of the frame to be better, as frames did not normally have suspension corrected geometry. 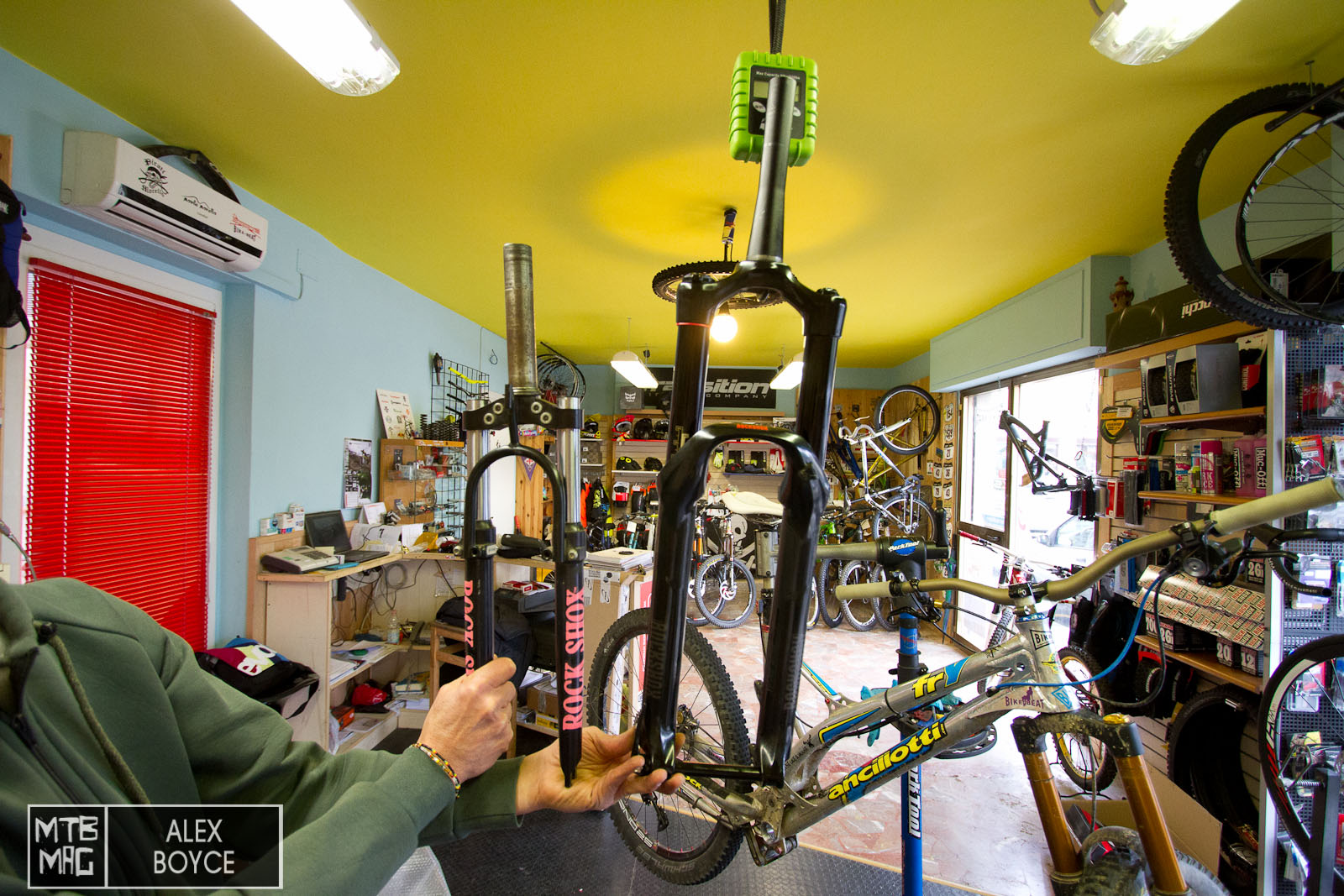 Amp research was an American company that tried to do things a bit different with their forks. We zoom ahead here a few years to 1995 and their parallelogram link fork the F3 XC. The idea of this fork was to move away from stanchions and tubes to a ridged fork which moves. Amp used a single spring and a hydraulic rebound cartridge. 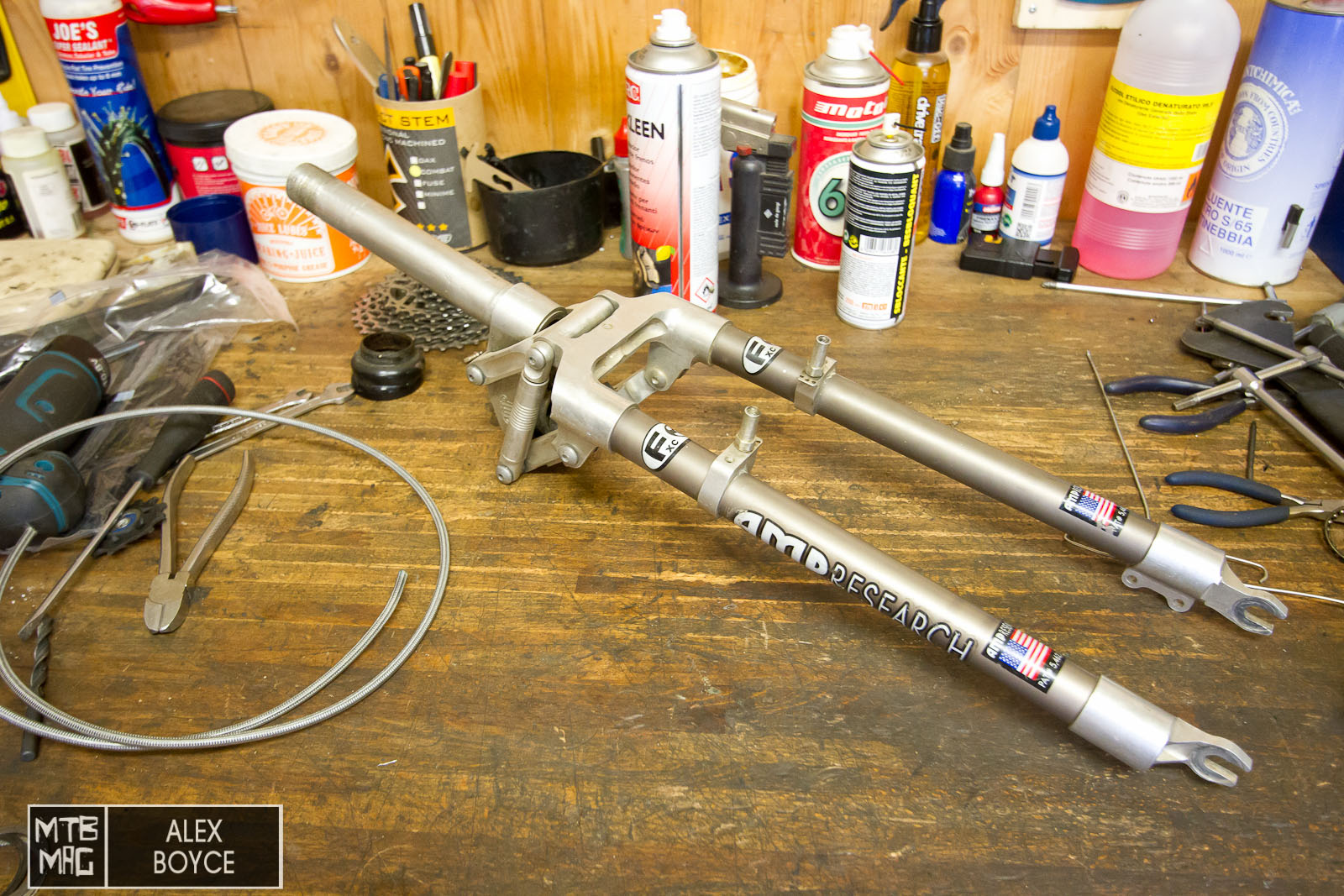 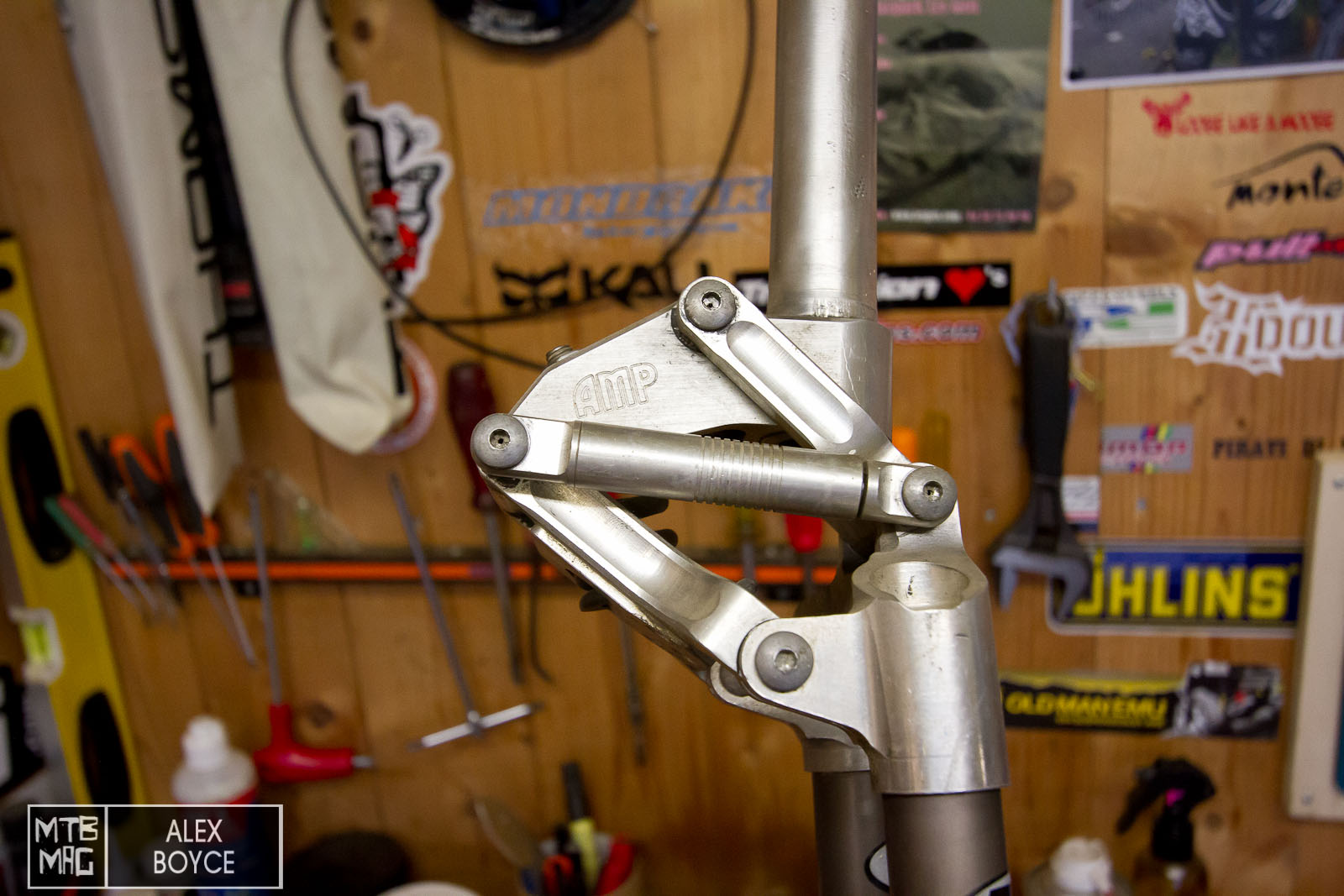 The side view shows the linkage and the damper. 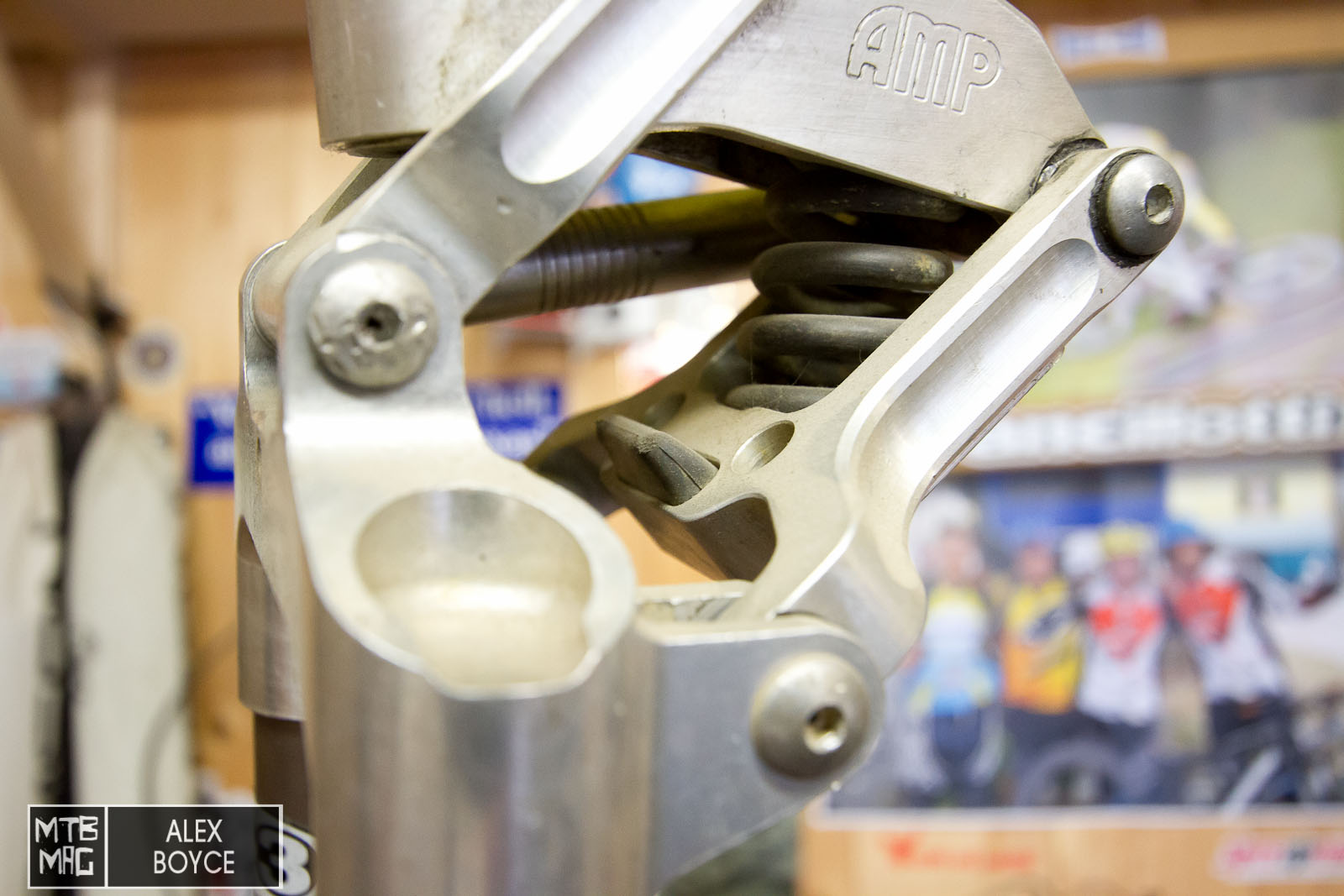 The spring and bump stop.

The Amp fork has a 1 1/8th steerer tube and is made of aluminium along with the with the legs being made of avalon, a space age material used on the shuttle. All this meant the fork came in at a really light weight 1.25 kilos. With around 60 mm of travel. The F3 has a small pre-load screw offering 1 cm of pre-load, which honestly we are not convinced we would be able to feel, but, it is there none the less. This moves us onto the other features, the Amp was one of the first forks where you could install a Pro Stop disc brake, or cantilever/v-brakes. All modern stuff for the times. The bump stop was also an interesting way of taming the fork as it hit the end of the stroke. 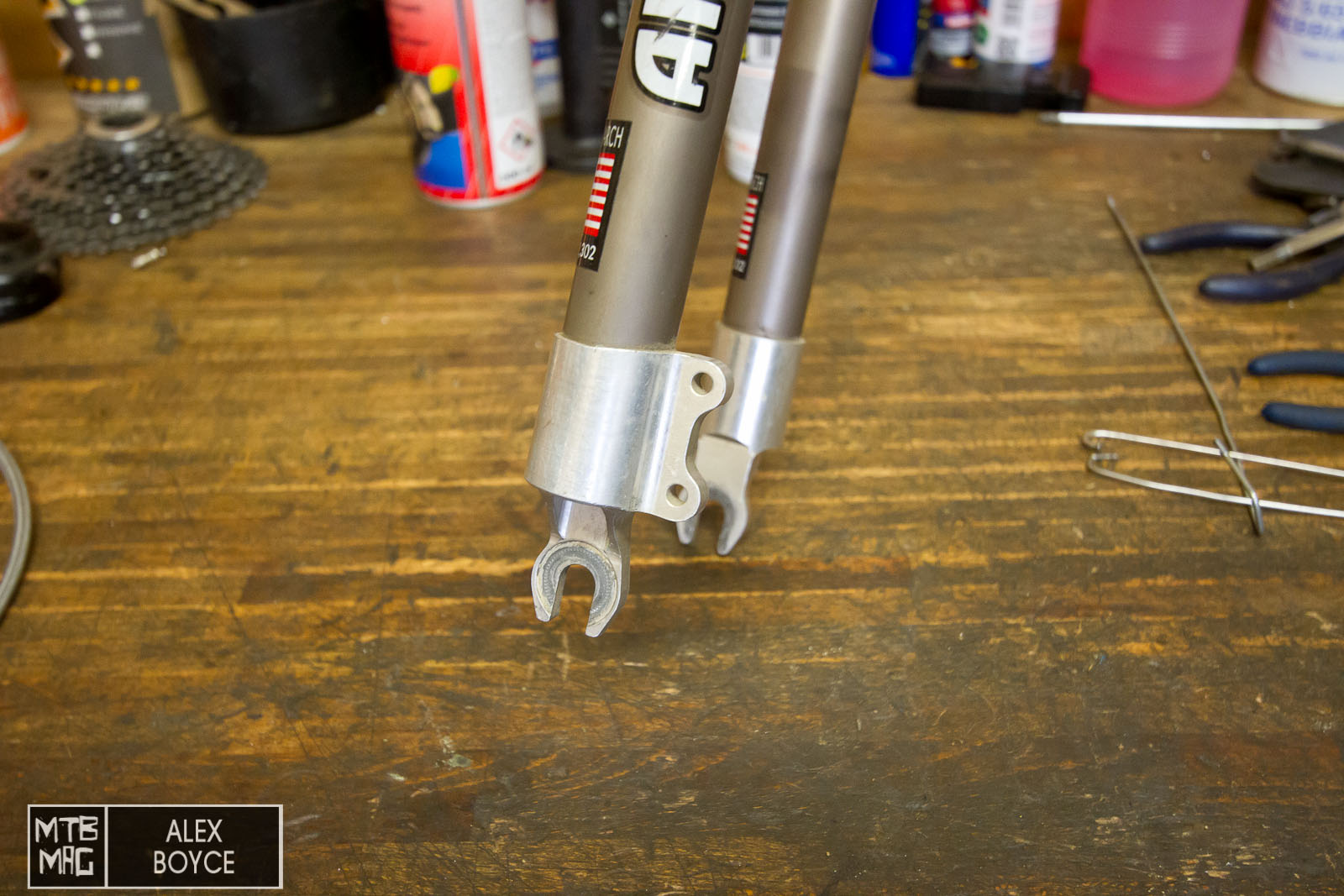 One of the first Pro Stop international brake mounts, with some very skinny drop-outs/QR connection points. 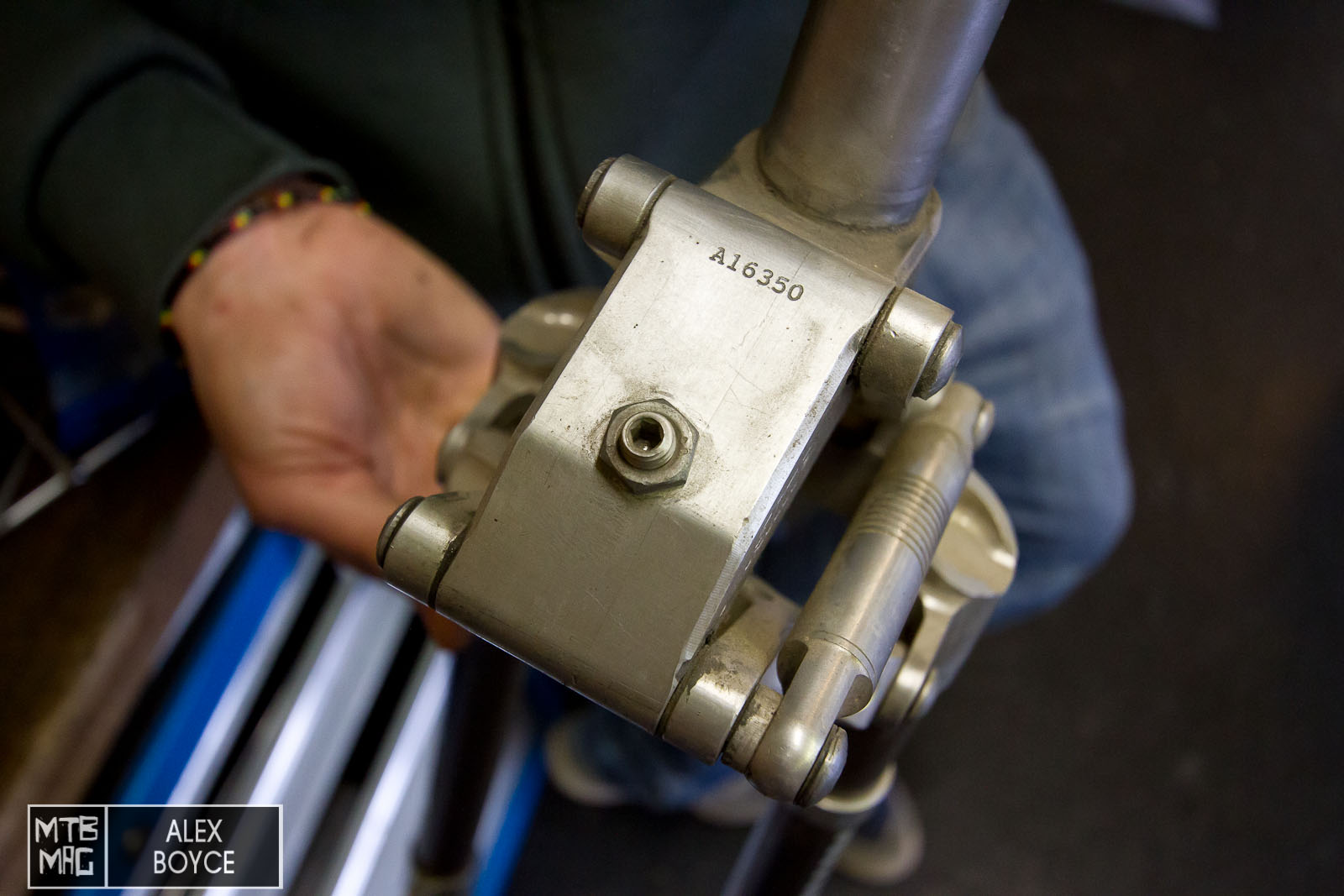 The pre-load spring, 1 cm of adjustment. 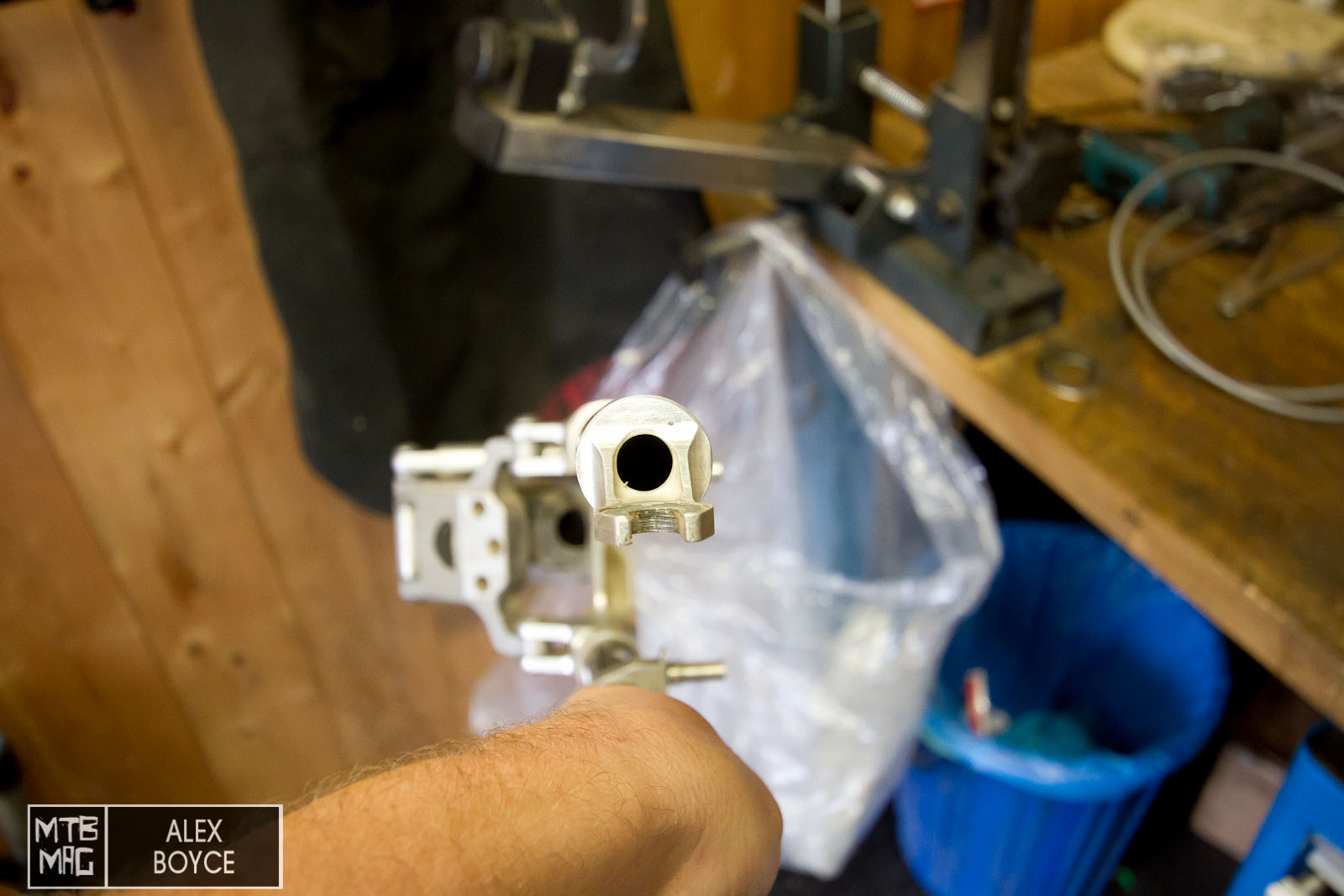 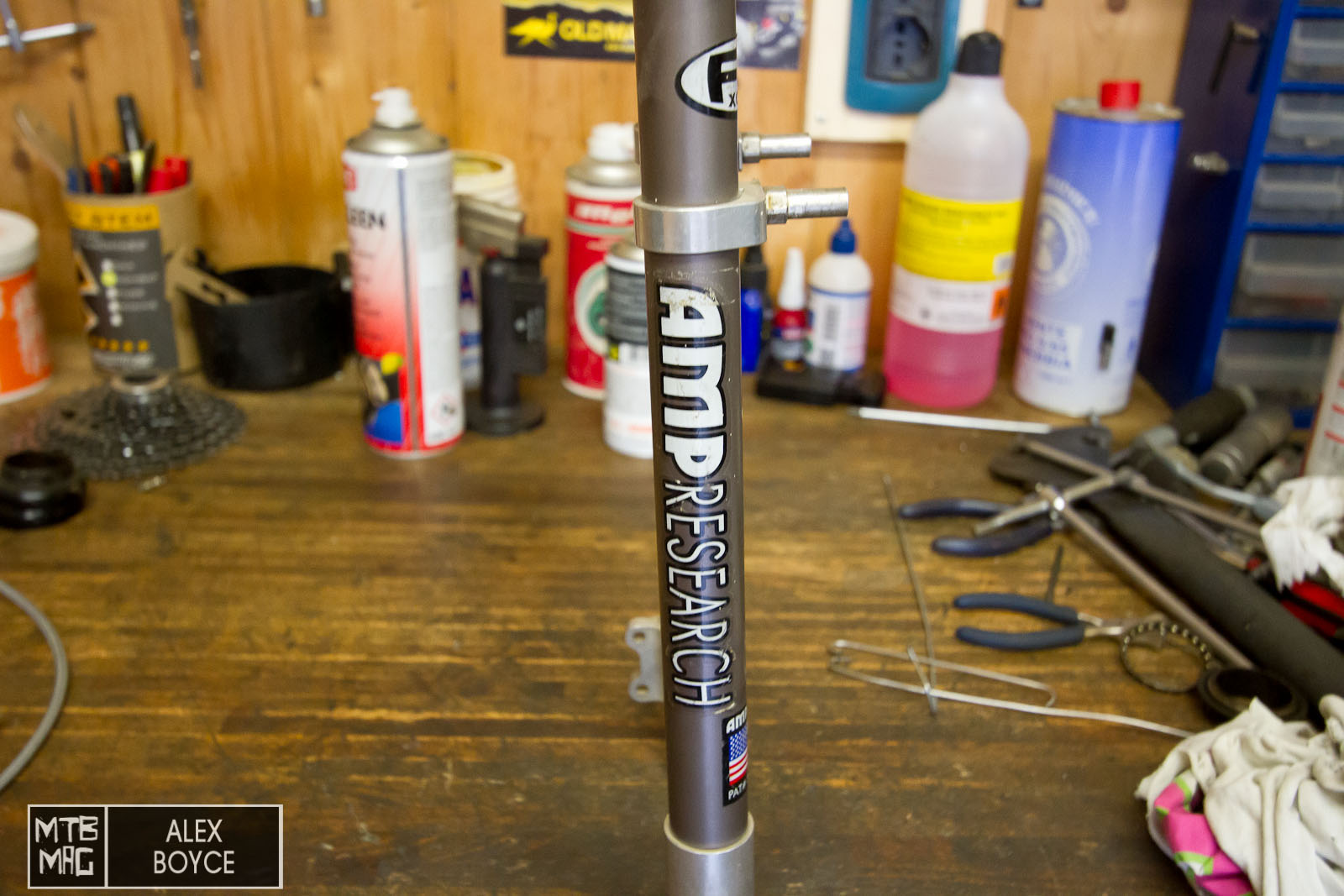 Our last fork for part 1 of our brief look at historic forks is the Marzocchi DH3 fork from 1995. With 76 mm (3″) of travel it was one of the first DH specific forks on the market. With springs, oil, air, and with rebound adjustment it was fairly revolutionary.  Marzocchi were  trying at this time to compete and develop their forks and were producing in Italy. 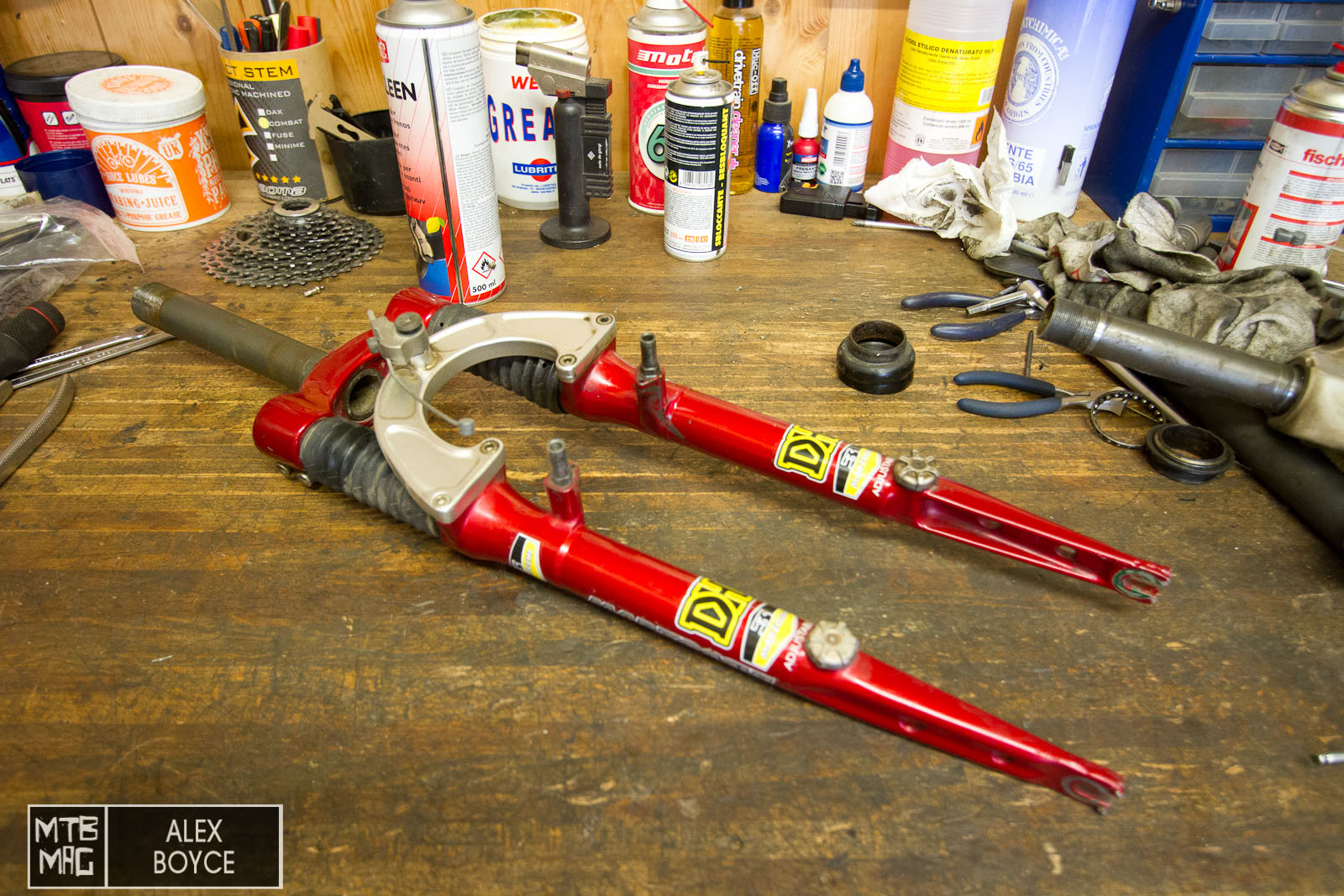 The DH3 was one of the first DH specific forks. 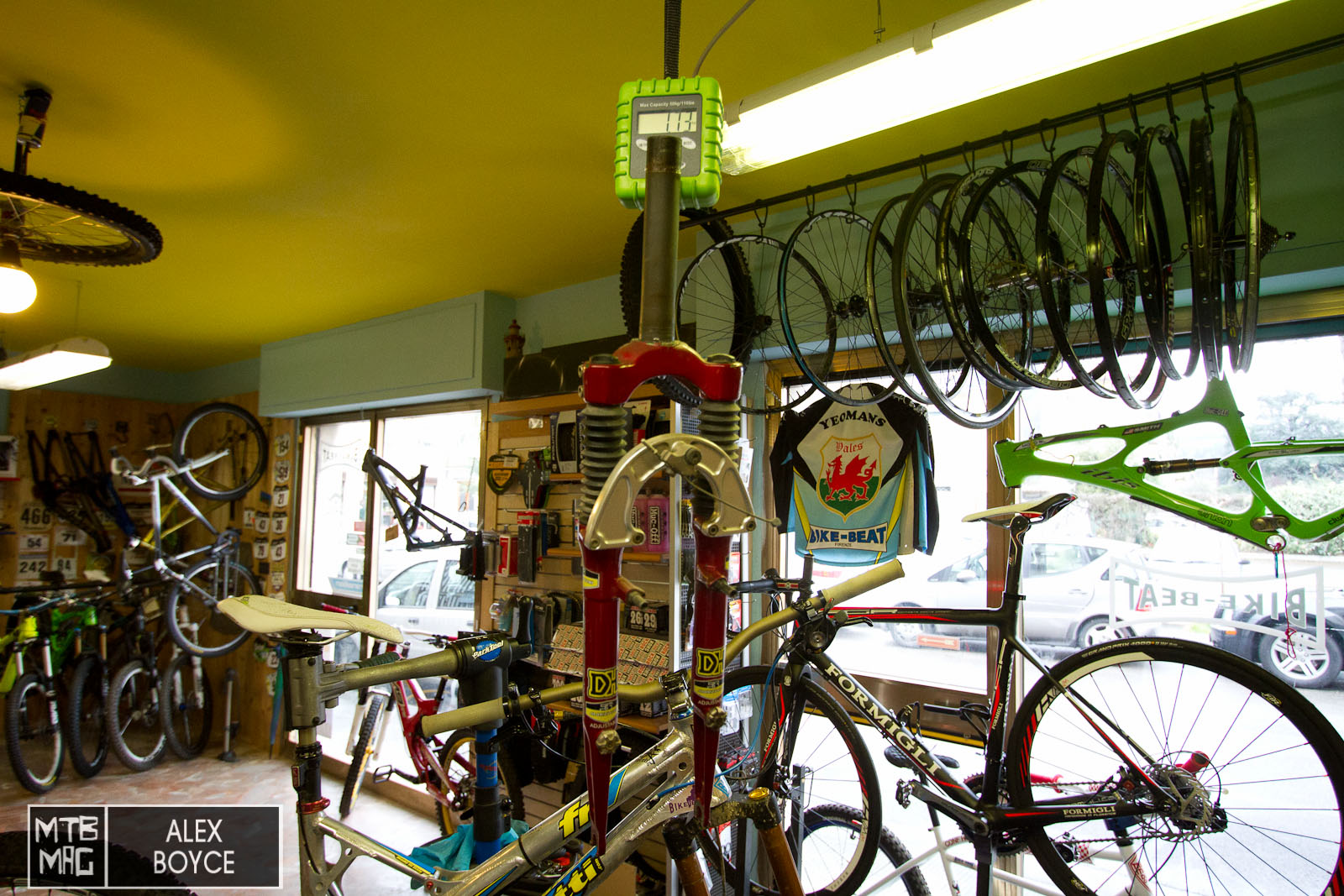 Weighing in at 1.73 kilos this fork was fairly heavy but robust.

The DH3 fork with mud boots was aimed at racers and ironically came in two colours. In fact looking closely at the fork it seems that Marzocchi repainted green forks red,  Antonio said at the time their production methods might have been unconventional. The brace on the front is fairly beefy and came with a cam that amplified the brake force at the wheel rather than at the lever.  The crown was fully replaceable. In those years there was very little difference between XC and DH racing and this shows with the slim lowers and XC look to the fork. 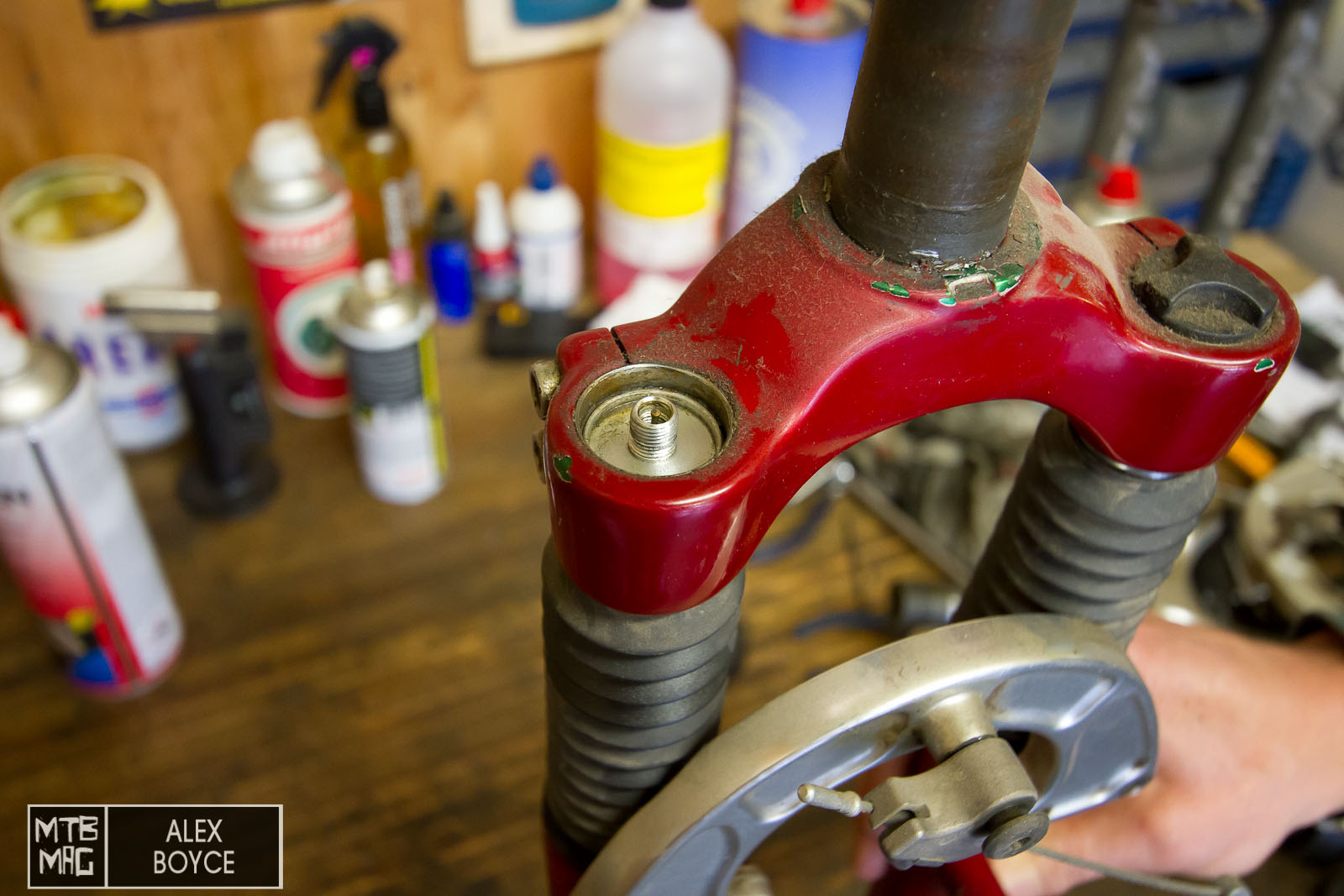 Air valves, one in each leg. 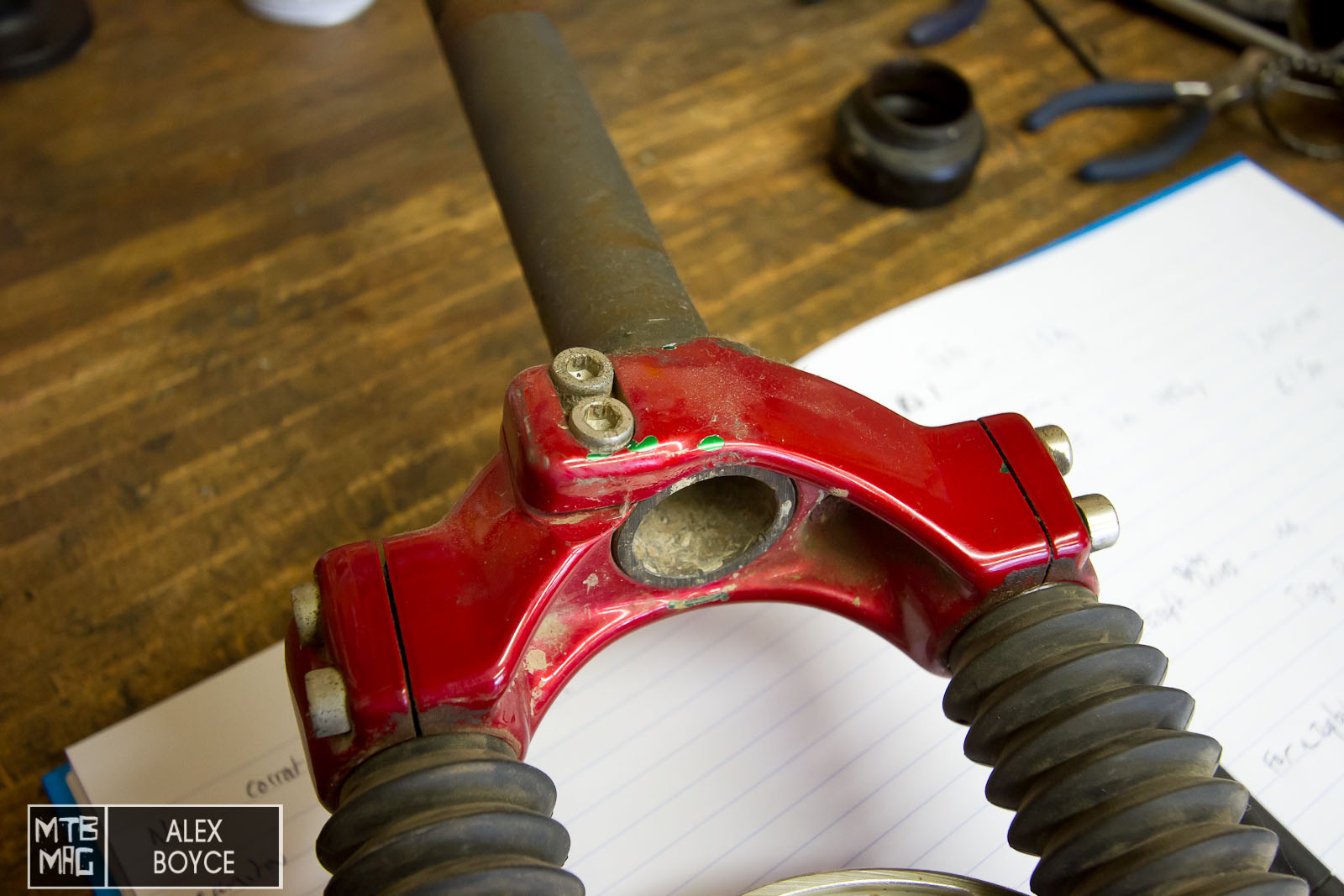 Looking at the crown we noticed a green colour underneath. 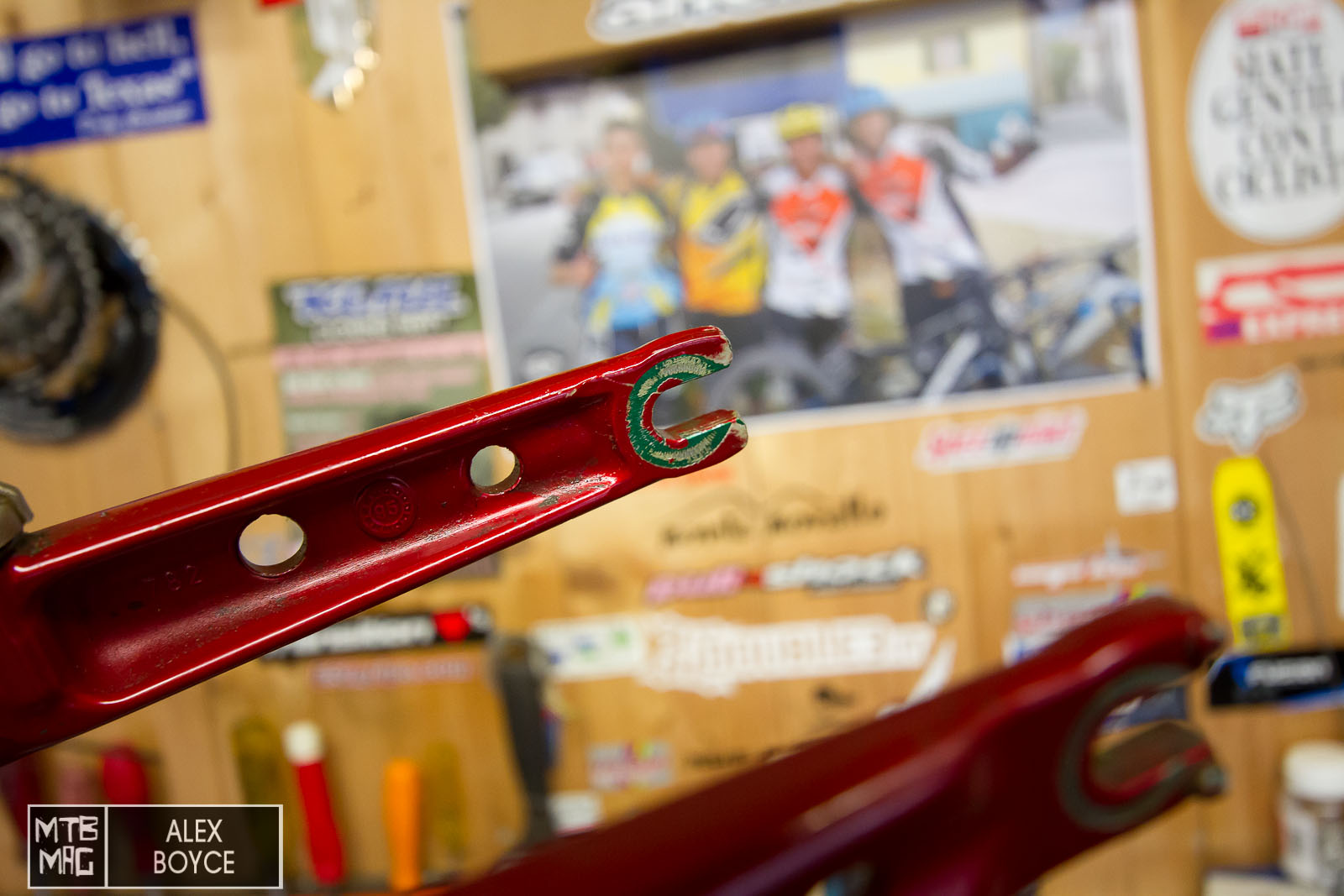 The lowers show production date and also very slimmed down forks, which are not great for no flexibility, forks from this era were known for being noodly. Even the hub/axle clamps are a XC style. 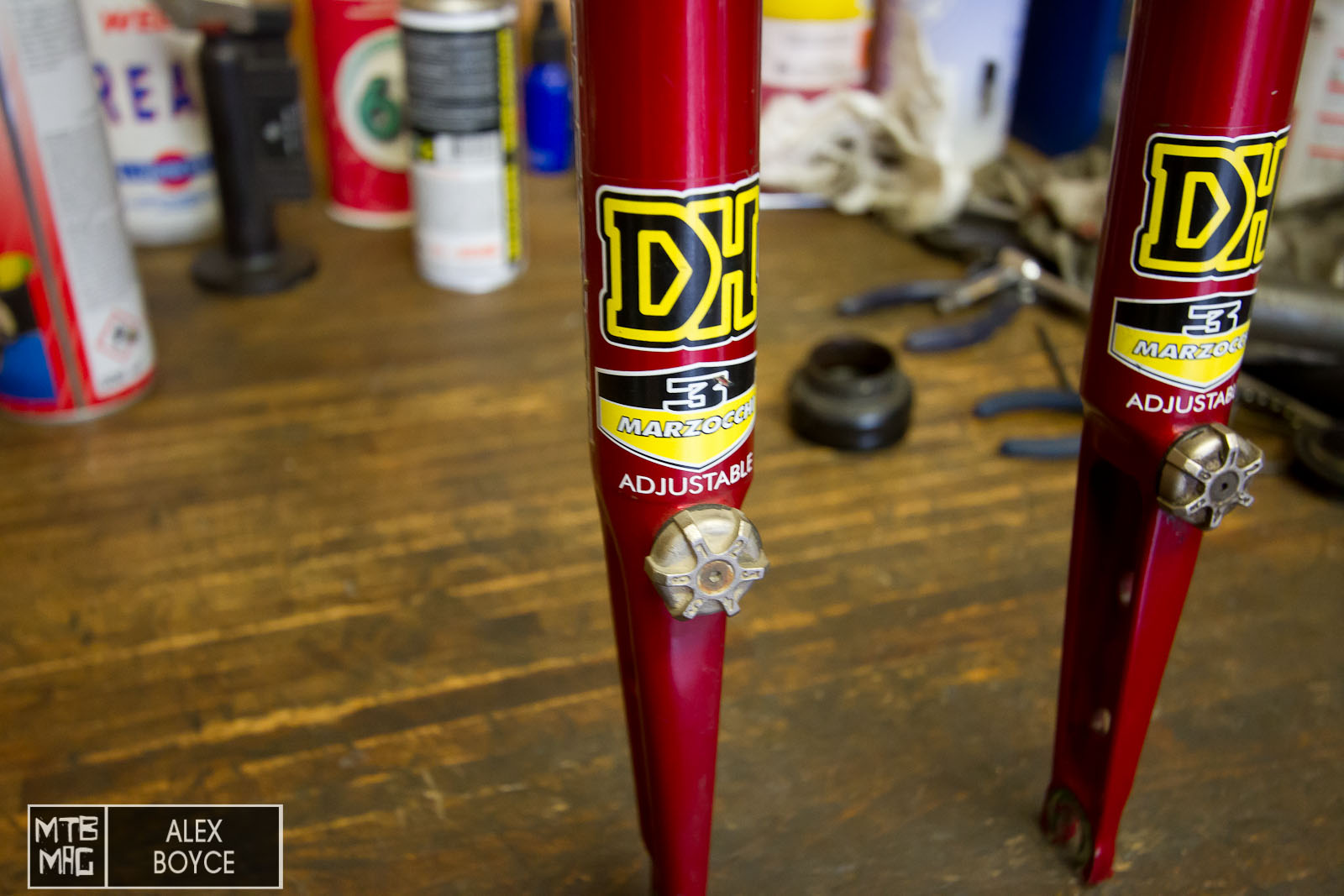 Rebound adjustment was coming, here each leg had it’s own settings possible. 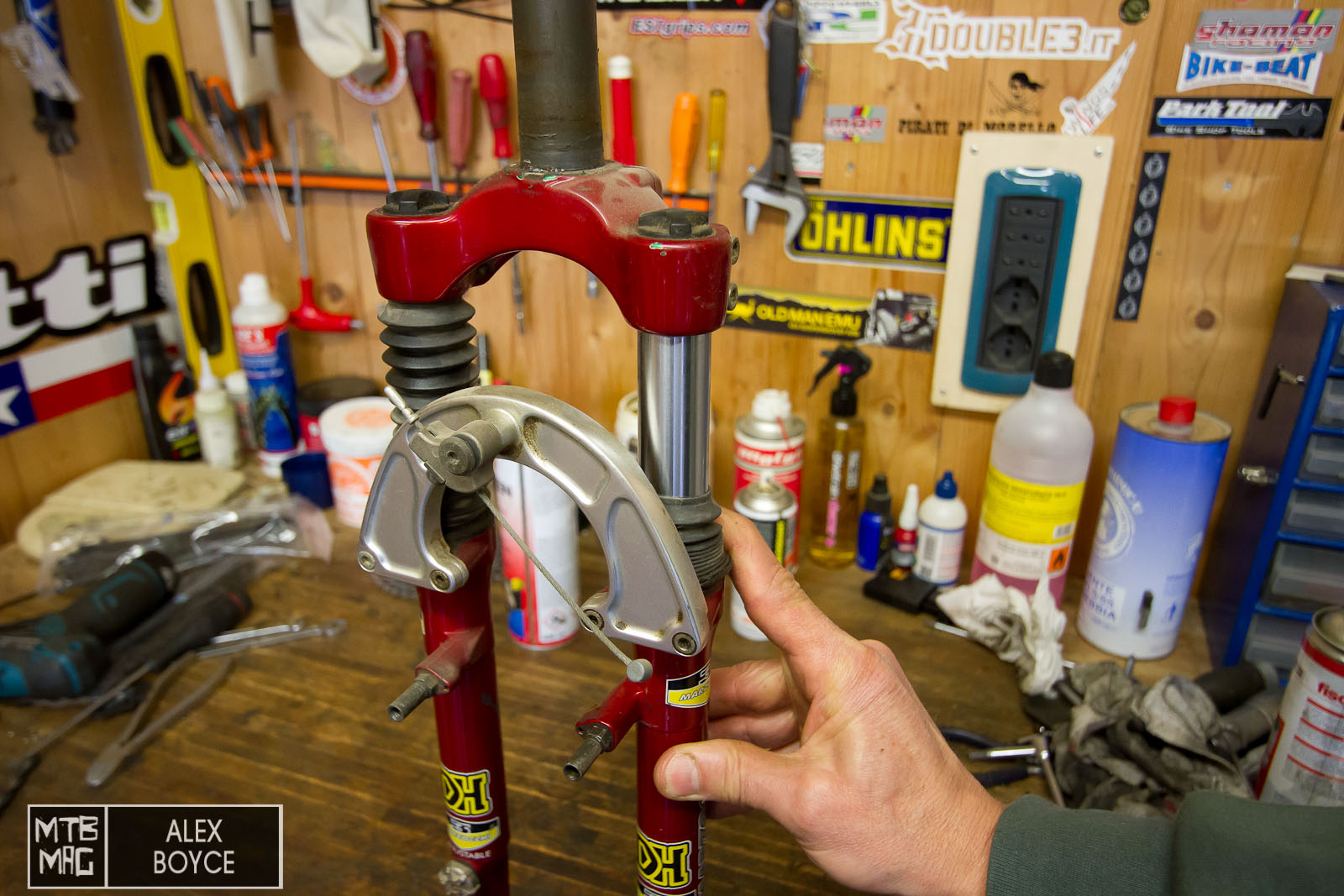 The stanchions were made of steel and are still in good condition.

Part 2 next week will take a look at some other ground breaking forks. 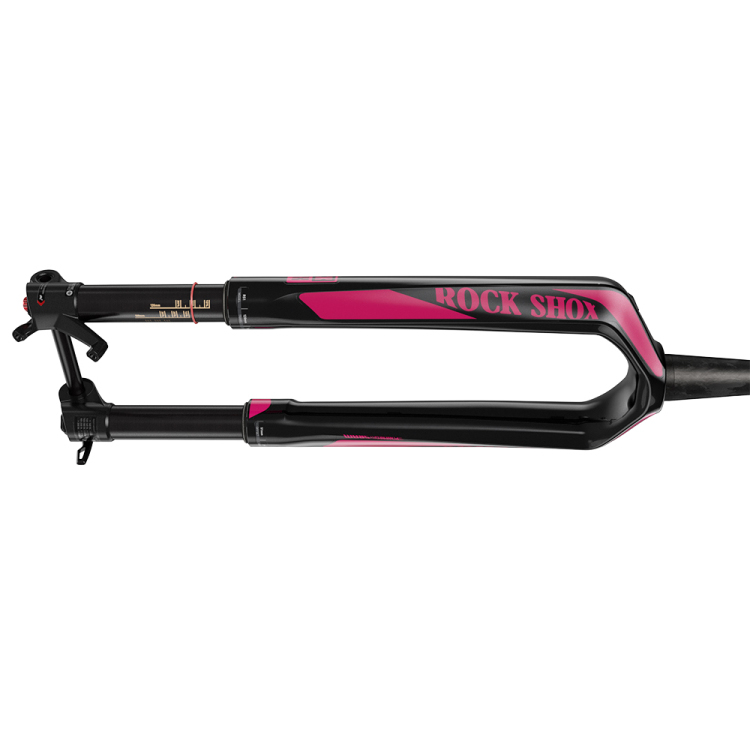