Recently Aaron Gwin, fresh from his overall win of the UCI DH World Cup 2015, has spent some days resting and training in Finale Ligure (Italy) with the Norco Factory Racing team, before heading to Vallnord for the World Championships.

During their stay in Finale, the top riders and Todd Schumlick, Norco Factory Racing team manager and personal trainer of several athlets among whom Aaron Gwin, hired Ride on Noli shuttle services, that we’re used to collaborate with for some of our bike test. This gave us the chance to ride with them and chat with Aaron and the other guys, in addition to enjoy a day riding with some DH legends.

The contract between Aaron Gwin and Specialized is expiring at the end of the season so we asked the American champion about his programs for the next season. He revealed us that he is negotiating a new contract with Specialized but nothing is definite at this moment, so he is currently keeping all his options open and taking into consideration other offers. It’s unlikely that Specialized will let a champion such Aaron go, but through his words we understood that there is the possibility that he could change team. Everything will be clearer in the next few months.

For those who are wondering about it, given that we asked the same thing to Todd and Aaron, there isn’t any offer from Norco Factory Racing. Actually the basis of their relationship is only due to the role of Todd as Aaron’s personal trainer. However Aaron confirmed that his partnerships with Red Bull and FOX Suspension will continue.

We also asked the guys from Norco Factory Racing about their goals for next season. Sam Blenkinsop will put his pedalling power also in the Enduro World Series, but he will continue to race the DH World Cup, where this season he finished 9th in the overall. Harry Heath is stoked about his 20th in the World Cup overall and he will race to stay in the top 20 and try to further improve his ranking position. 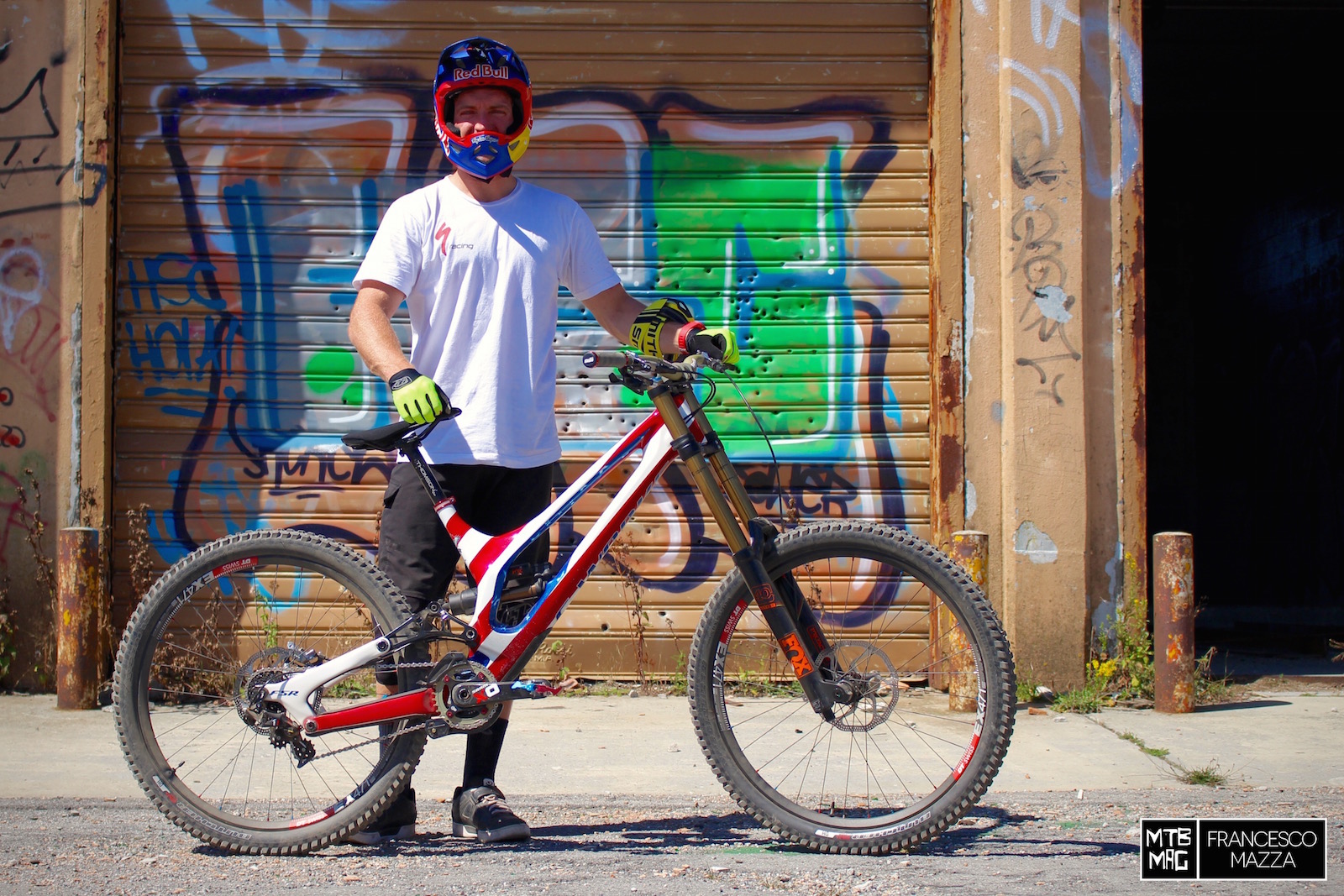 As you can see in these pictures, Aaron Gwin was in Finale with his brand new Specialized Demo with a stars & stripes special edition livery realized for the next World Championships in Vallnord, so we were lucky enough to be the first people to have a glimpse and take some photos. 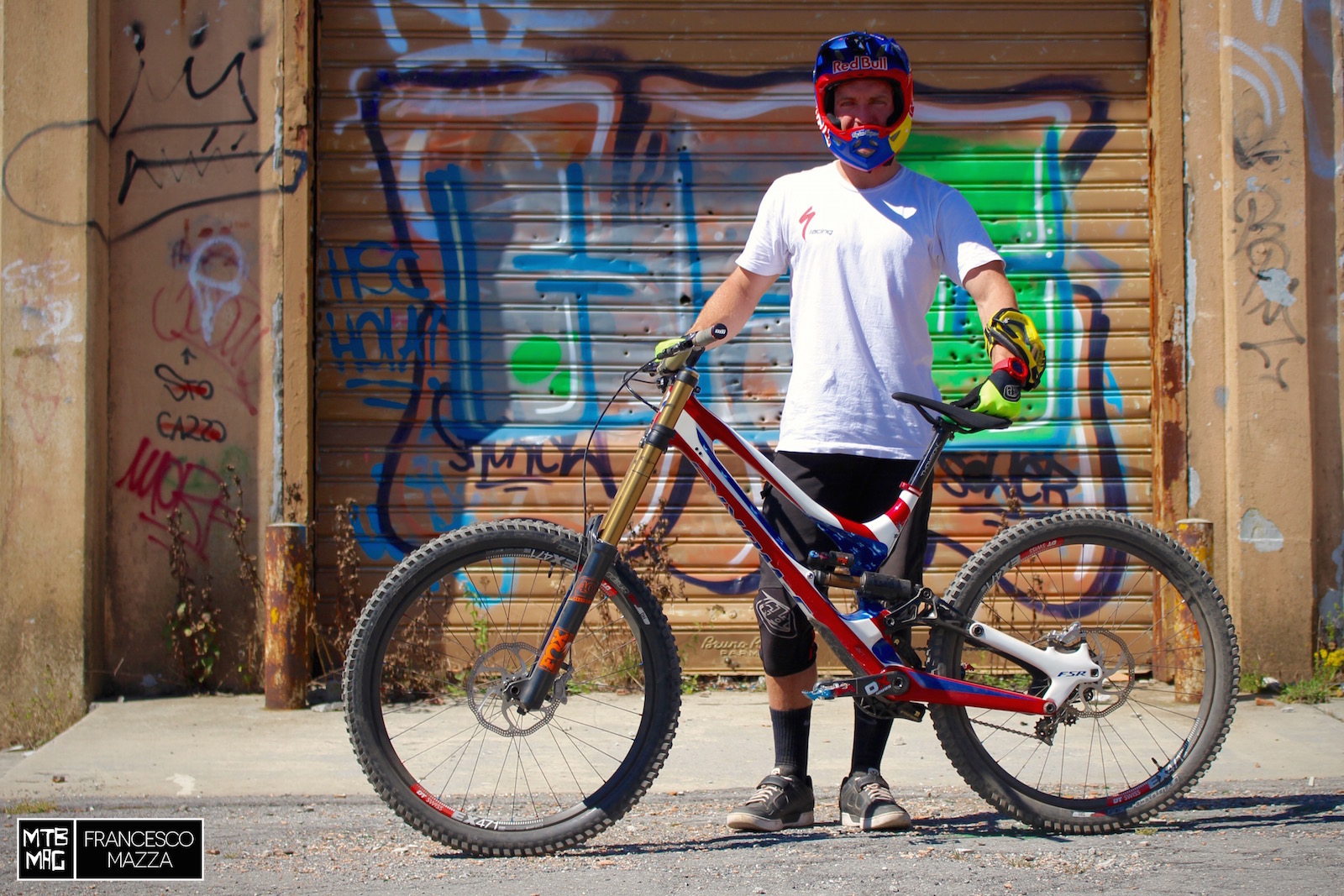 Aaron will use a FOX FloatX2 air shock also for Vallnord’s track. Notice how the stars are sparkling around the shock housing. 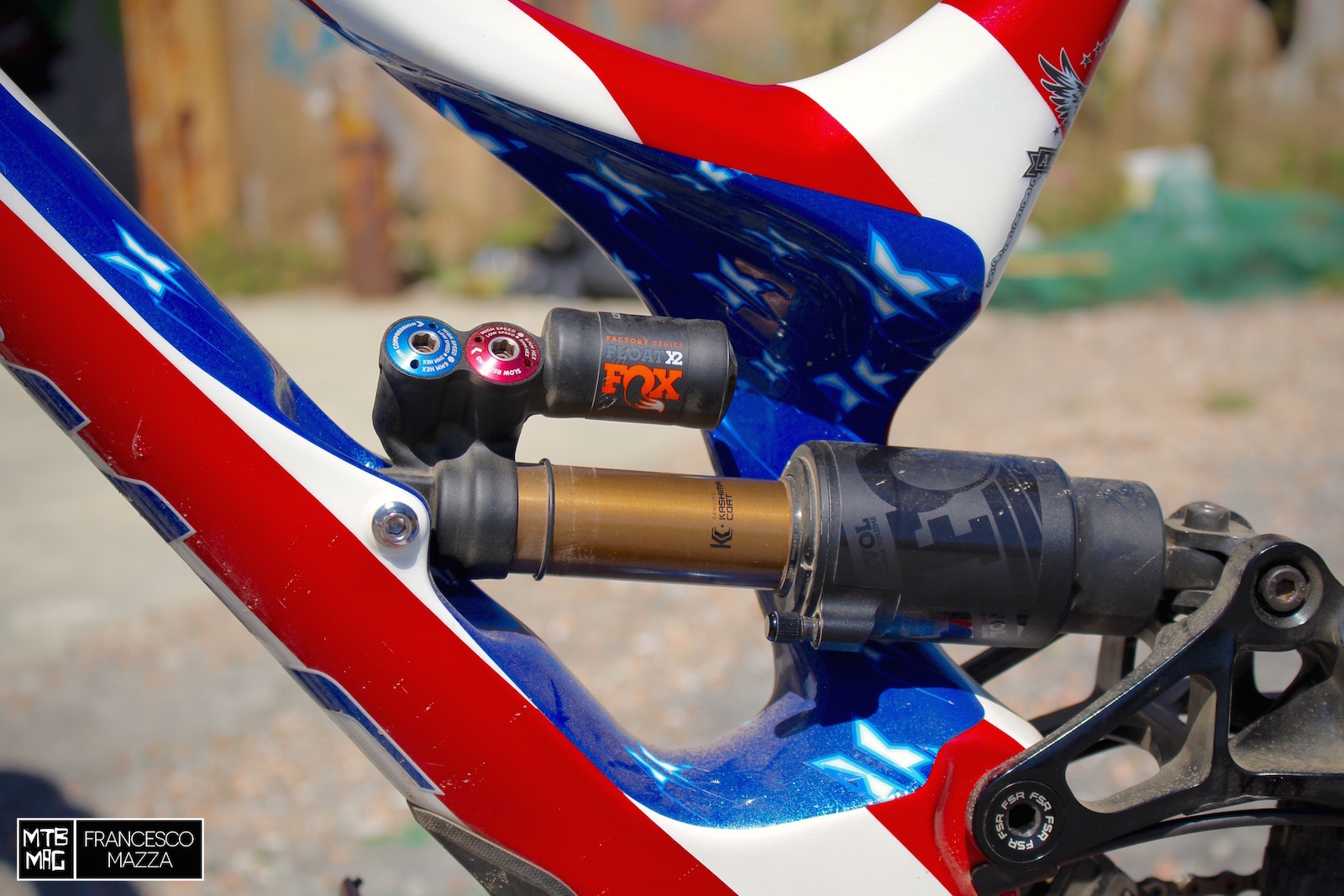 Stars on the top tube as well and on the left side of the down tube. The rest of the frame is mainly painted with the stripes theme. 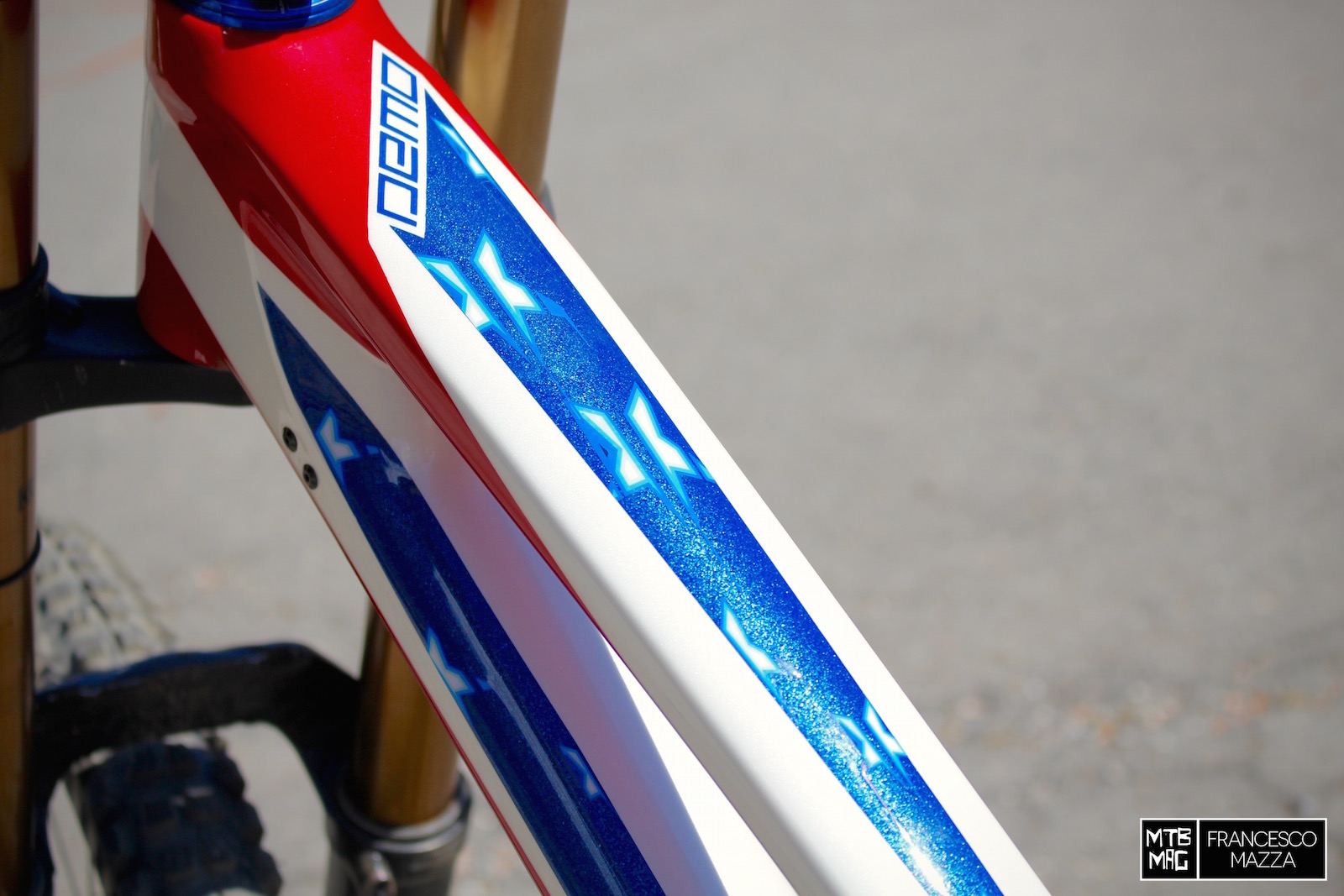 On the seat tube we can see a logo dedicated to the Worlds event. A bald eagle holds up a banner with the Aaron Gwin’s name and an emblematic broken chain, in memory of his epic chainless run in Leogang where Aaron has won the World Cup #3. Above the eagle, the big S of Specialized stands out, surrounded by 12 stars. Ten of them represent all the World Cup races that Aaron has won until last season, while the other two are for the 2 World Cup races that he won this season at the moment that the frame was painted, before Windham. Then Aaron has won another two races, so there should be 14 stars now. 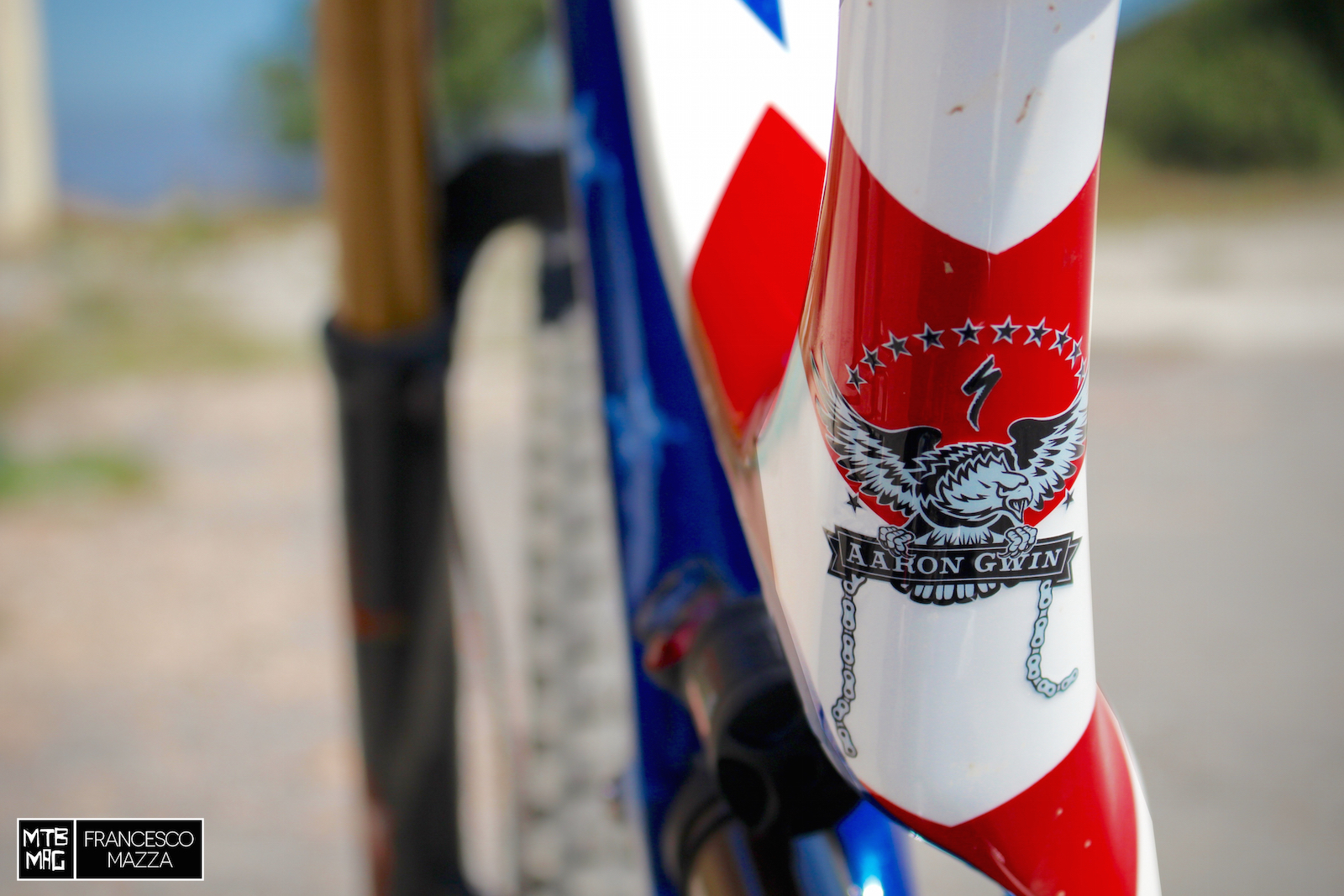 HT Components made a special edition of their X2 pedals for Aaron, with a stars & stripes artwork. 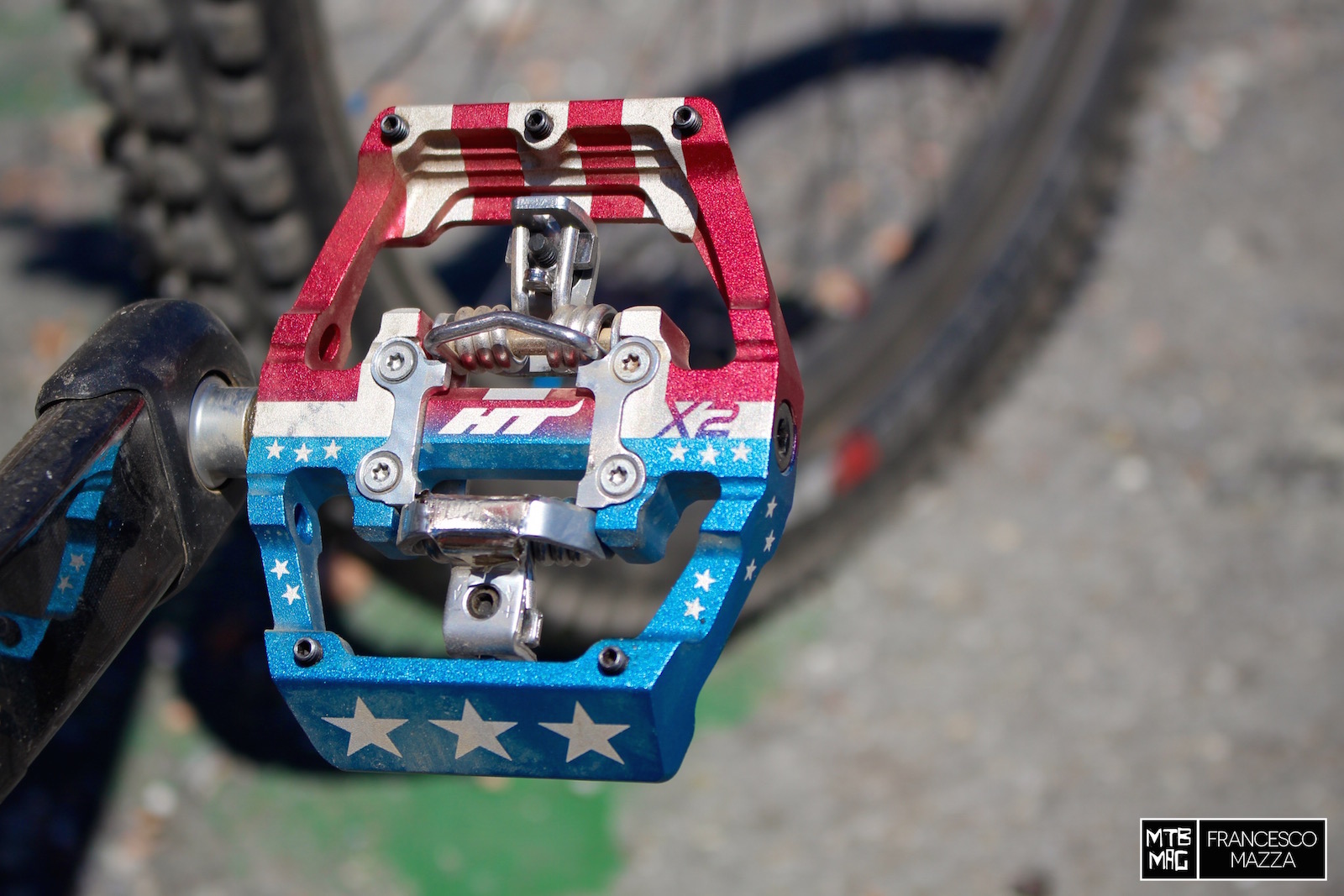 Good luck to Aaron and the Norco Factory Racing team. We are really happy to have spent some time with them.