Specialized isn’t the first brand that comes to mind when one thinks of heavy duty DH handlebars…so that’s exactly why we were a bit excited to try out their S-Works DH bar. The numbers are full on and the weight is quite low. We’ve spent the last few months with it bolted up to various bikes. It’s rated for downhill, but since we often use DH bars on our trail bikes, it’s seen substantial trail time on our Scott Gambler, our Evil Insurgent and even our Evil Following pictured below. Speaking of trail bikes – it’s worth mentioning that while you could cut it down on your own, it’s available in both 750mm and 780mm widths. 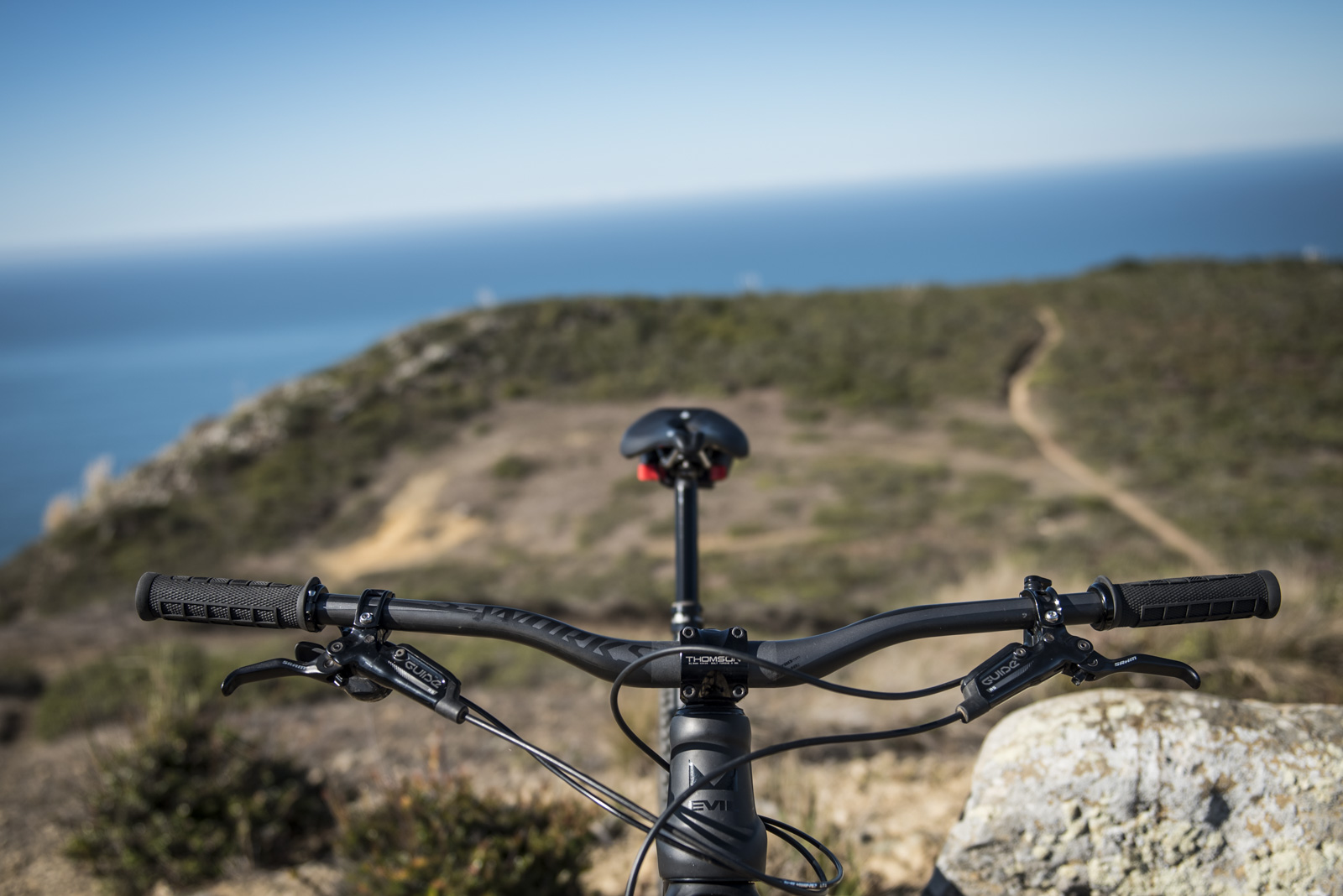 Straight away you’ll notice the low weight of the S-Works bar when you pull it out of the packaging. At 240 grams it is plenty light without raising concerns about pushing the limits. For the sake of reference, the Renthal Fatbar Carbon (one of the more popular bars on the market) sits at 225 grams so it’s in the same ballpark. Speaking of the Renthal, their original aluminum Fatbar has been popular for a reason as it has a very comfortable backsweep : upsweep ratio. Once we bolted the S-Works bar onto our bike, we noticed it had a very similar (and comfy) feel. That said there is a bit of a contrast in numbers.  5º up/7º back for the Fatbar and 6ºup/9º back for the S-works. Either way, it felt like home immediately. Some of this is likely due to the fact that it’s a bit on the tall side with its 38mm rise. 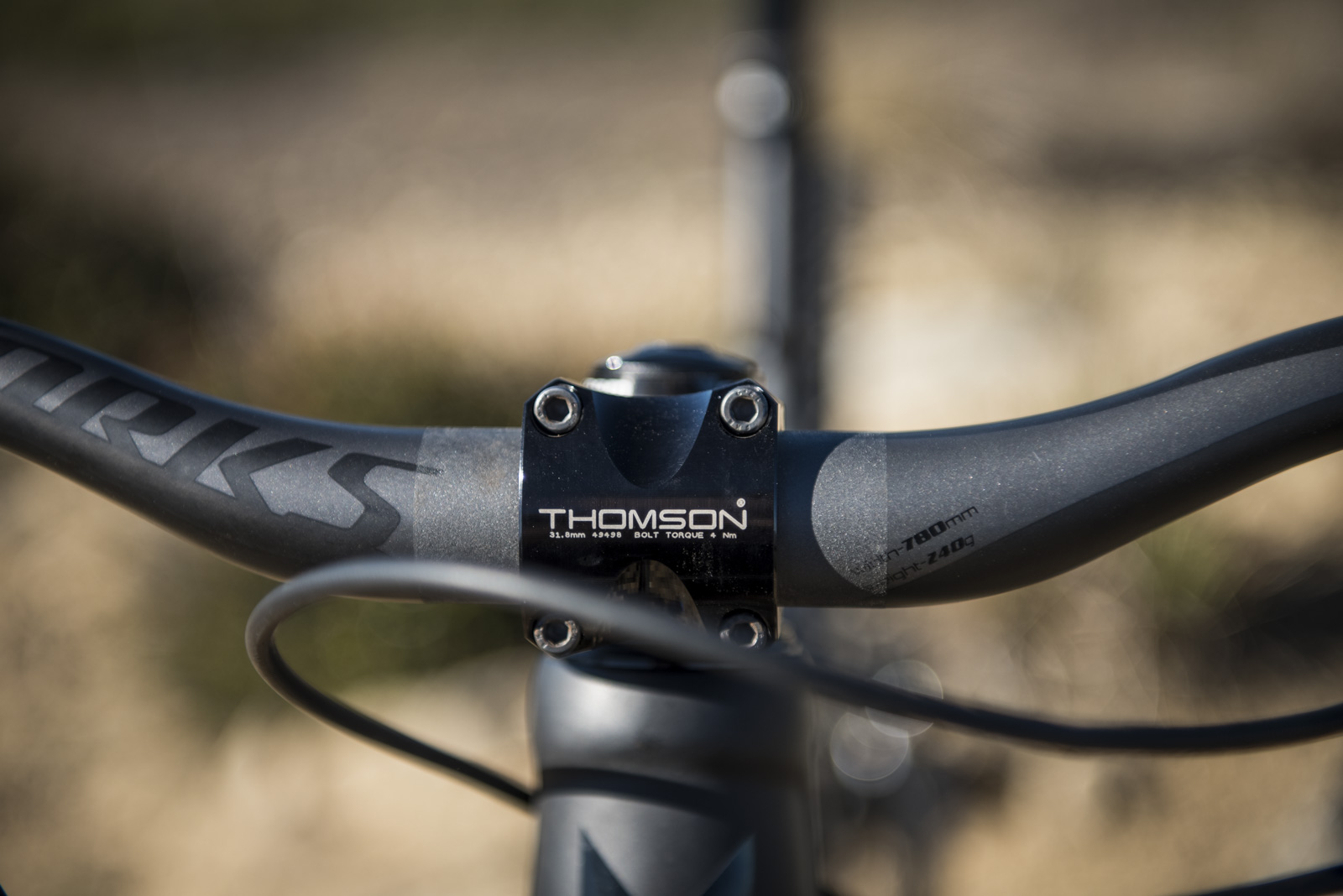 Aside from the initial feel, the last thing worth discussing is that Specialized went the extra mile and used a rough, gritty handlebar clamp area to prevent it from rolling or slipping. Let’s see how it did out on the trail…

Right off the bat the S-Works DH bar felt just right in our hands. It had a bit more backsweep than what we’re used to. In the grand scheme of things, that just meant that we spent a few extra minutes in the garage trying to decide if our bars were straight and if it would bother us or not. As soon as we dropped into the first few turns we didn’t even notice the additional sweep. If anything – it may have been easier on our wrists, but that is always hard to gauge.

As most people already know, aside from a sizable weight reduction, the next major reason that riders spend gobs of money on upgrading parts from aluminum to carbon fiber is the fact that it has such a great on-trail feel. Carbon fiber handlebars have a reputation for being a bit of a gamble in the DH world. That said, lots of riders are willing to take that plunge because of its excellent damping characteristics. Carbon is more resilient and less harsh than aluminum so it doesn’t beat your hands up quite as much. While that has to be advantageous in all cycling disciplines, DH riders will likely reap the most benefits as their hands tend to take the biggest poundings.

While there isn’t any rational way to quantify how much handlebar A takes the edge off as compared to handlebar B, we can definitely attest that there is stark contrast between this bar and our old aluminum one on our DH bike. The stiffness and precision felt no different, but it just smoothed out the small chatter a bit. We found it to be akin to running a couple clicks less compression in your fork, minus the dive.

In the past few months we’ve used this on both our DH rigs and pedal bikes and we’ve loved it. Keep in mind, our lanky tester usually runs a freakishly tall bar on his trail bikes. That made us wonder why Specialized only make this little unit in a 38mm rise. We’ve loved our time on it and think they could sell plenty in a 20mm rise to complement it for the non long limbed crowd. As far as durability goes, we’ve taken some sizable crashes and always did our due diligence and inspected it for cracks but have found it to be flawless. As always, you need to err on the conservative side and if you have any doubt about a carbon bar’s integrity, just replace it. For $180, it’s a bit of a luxury piece, but it isn’t much more or less expensive than any of its competitors, and when compared with the cost of a carbon DH rim – it’s reasonable. We’ve found the Specialized S-Works DH handlebar to be the perfect stealthy looking compliment to any gravity or trail bike. As mentioned earlier – we’d love to see the Big S make some more of them in a more trail friendly rise.