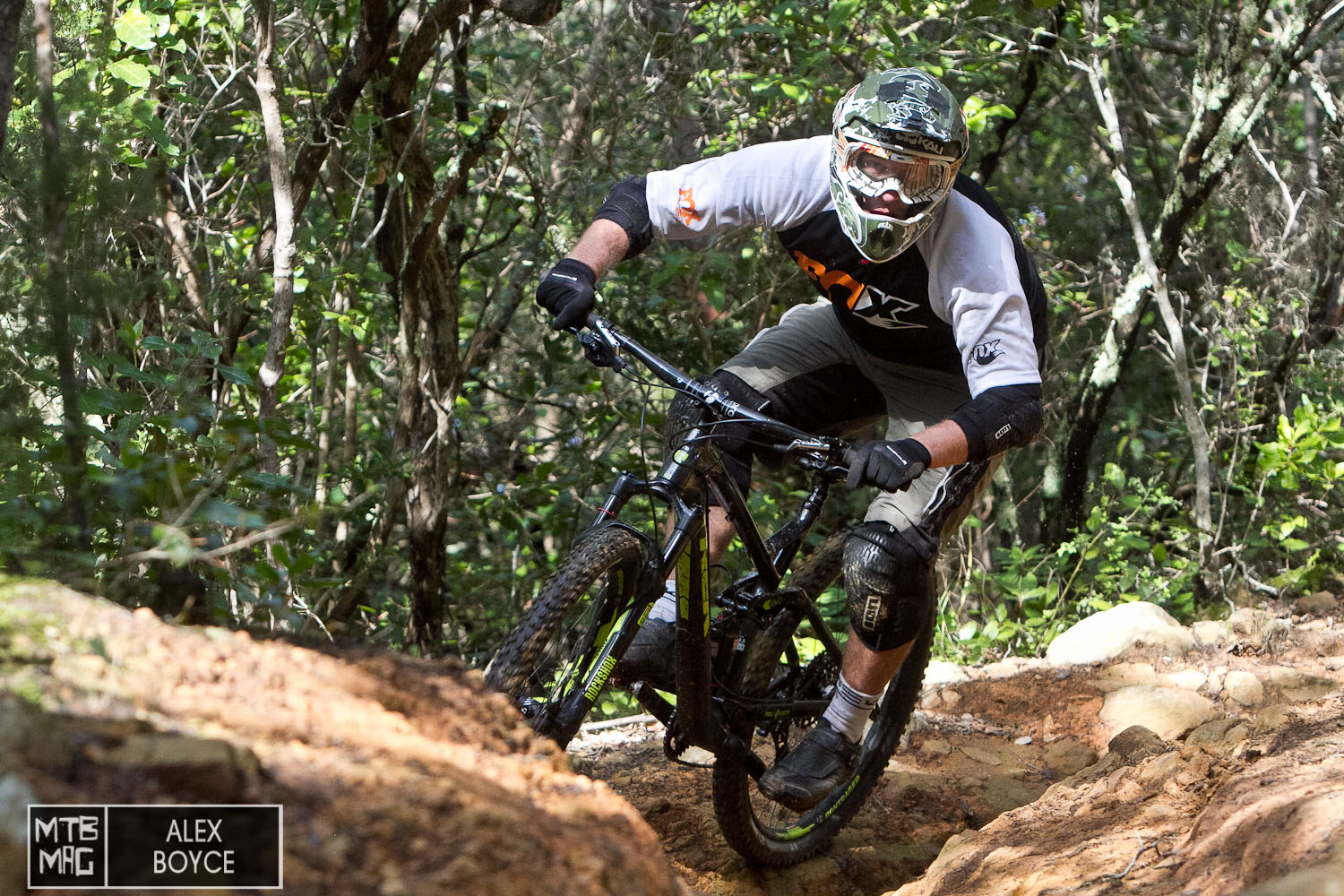 [Comparative Test] One Of Our Favourite Bikes, Trek Slash

[Comparative Test] One Of Our Favourite Bikes, Trek Slash

Our recent comparative test prompted each of the testers to consider their rides for 2015, and what they would prefer to ride. Normally we try to avoid bias and preference but this time we were asked to select our favourite bikes of the test, one of our personal favourites was the Trek Slash. 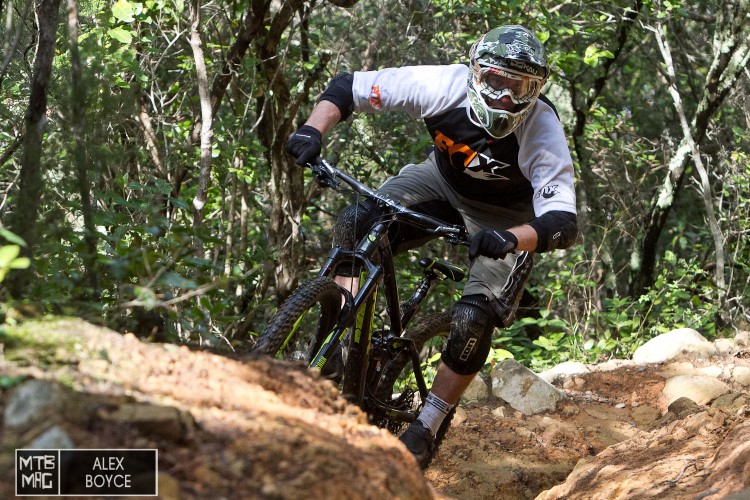 Riding Rocco with the Trek Slash.

When we were handed the Trek we werent sure we would like it, maybe a few thoughts went through our minds that it would be better if a smaller lesser known brand of bike would be our preference and very nearly the Banshee came close, but after riding the Slash, there is no doubt that it became our favourite bike. Ian Collins recently tested one as well and really liked it, so here is our opinion after comparing it back to back with all the other Enduro bikes we tested in Punta Ala. 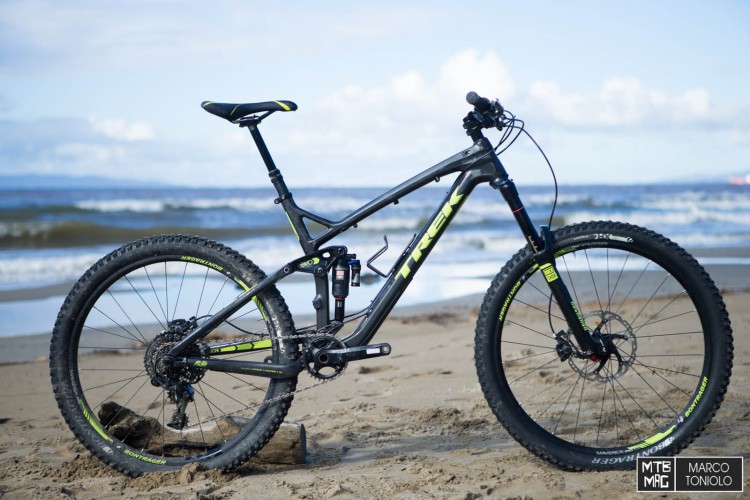 Out of the box the Slash that we had for our test was mounted with top line components based around the SRAM 1×11 system, including Rock Shox suspension and Bontrager wheels, it felt light and was easy to set-up for our testing purposes. The frame size we had on test was a 19.5″ with a 60mm stem, which seemed a well proportioned combination that balanced size/rider position with a balanced steering response that wasn’t too fast and twitchy in climbs. The over all package and finish reflected the price range of the bike and would leave any potential purchaser happy with out a need to upgrade anything. 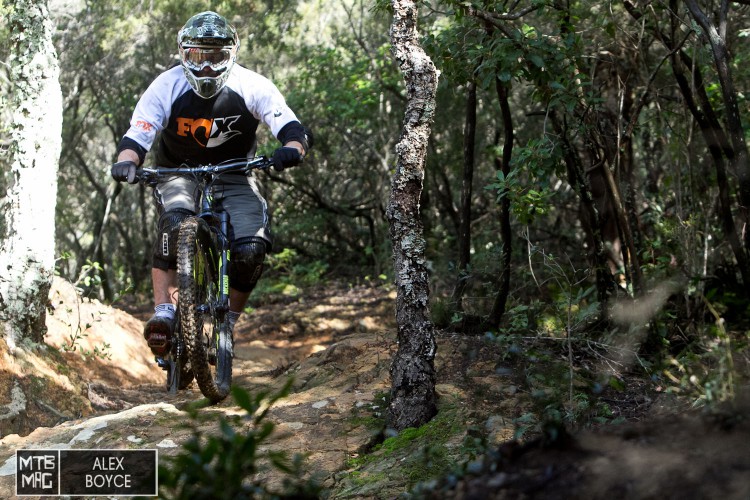 The floating 4 bar rear suspension compared to the other bikes on test seemed like the plushest unit out there. It was sensitive to little vibrations and hits and at the same time when trail conditions became really rough it ate up the trail effortlessly giving a progressive feeling with no bottom out. The slight downside was that under pedal load it does bob. However despite this uphill the bike felt nimble and could be flicked around tight corners and it sent us up the hill smoothly and efficiently. In this respect for us it out performed many other bikes in climbs.

With this good climbing tendency bikes normally suffer slightly in the downhill sections. However this was not the case with the Trek, it shone downhill and was able to float over rough sections with ease and poise, no nervous tendencies were felt and the ride was smooth due to the good progressive feel in the rear suspension system, tied in with a Pike fork.

The wheel package for us seems excellent and with wide rims and a great feeling in corners with the right pressure, we were not left disappointed. Reminded again of the fact that it was a stock build, it was a refreshing surprise to know that the idea of the designers was to come up with a do it all Enduro machine, with this idea reflected in many of the component choices.

Trek did a large amount of homework on this bike, so when we started to think about what could be improved it seemed that probably the main issue about bobbing could be improved with a shock lockout, as found on some of the other bikes we tested like the Scott or the GT. The head angle was actually the slackest of all the bikes (together with the Nomad) but actually gave a balanced ride. A shorter stem would be a personal preference but if it was shorter the climbing characteristics would change regarding the steering, so we would prefer to try and see if a longer frame/shorter stem combo  might benefit us more, thus maintaining all the geometries. This would be achieved probably most easily by just going up a size, as Trek provides so many sizes of frame it would be good to try the next size up. 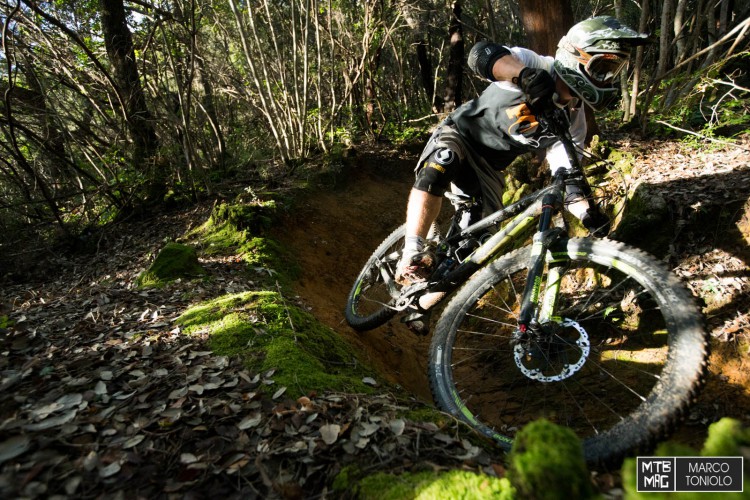 The Slash was composed and agile in all situations.

The Trek is a great bike that overall came fourth in our test. It is an out of the box bike. It works and you can ride it anywhere, development on this bike came from Trek’s professional race program and they listened to what racers needed, plus it seems the development team at Trek looked at what everyday Trail/Enduro riders do and added those elements in as well, so here we have a bike that works and is one of our favourite bikes and anyone is going to enjoy riding. 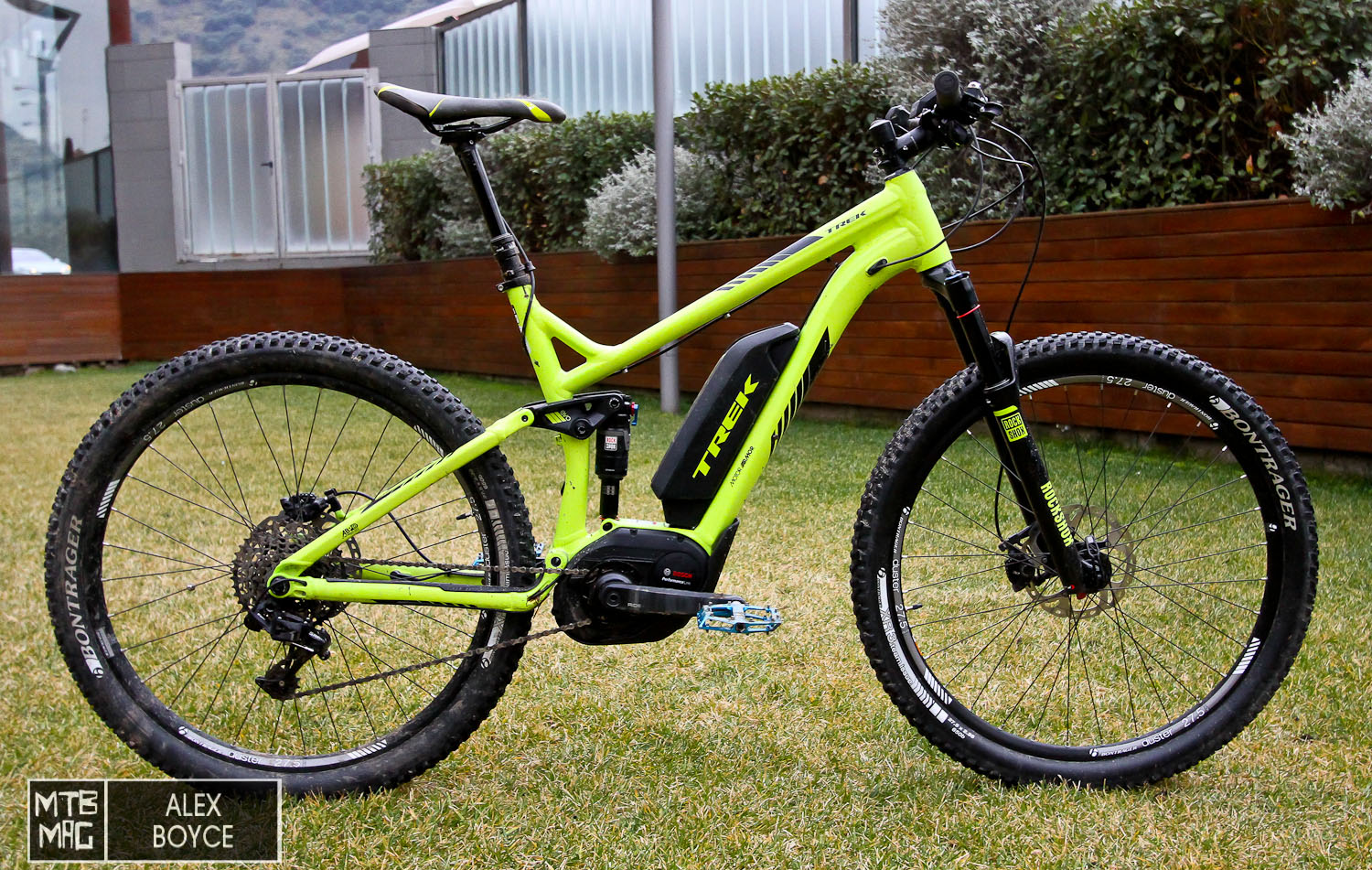 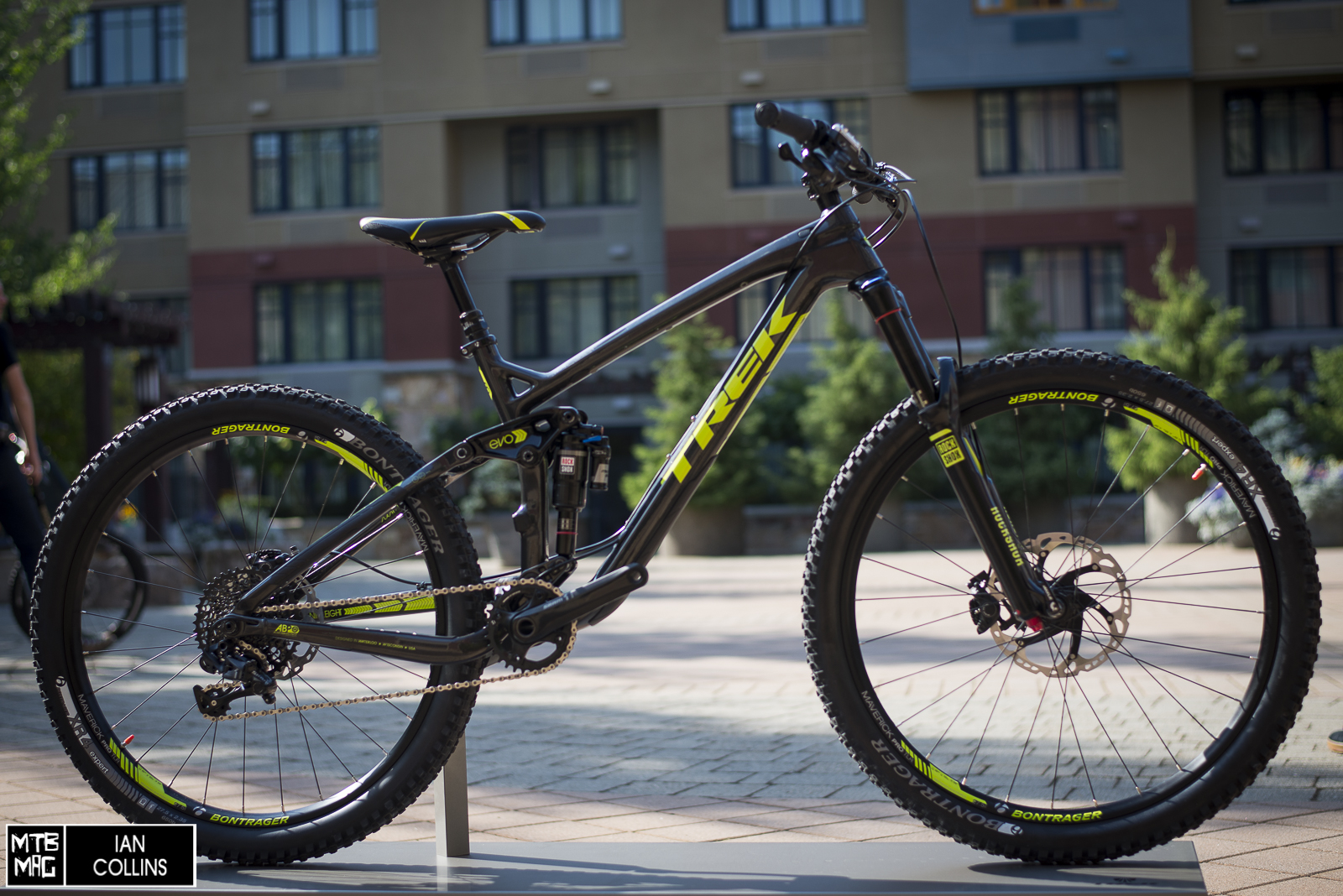 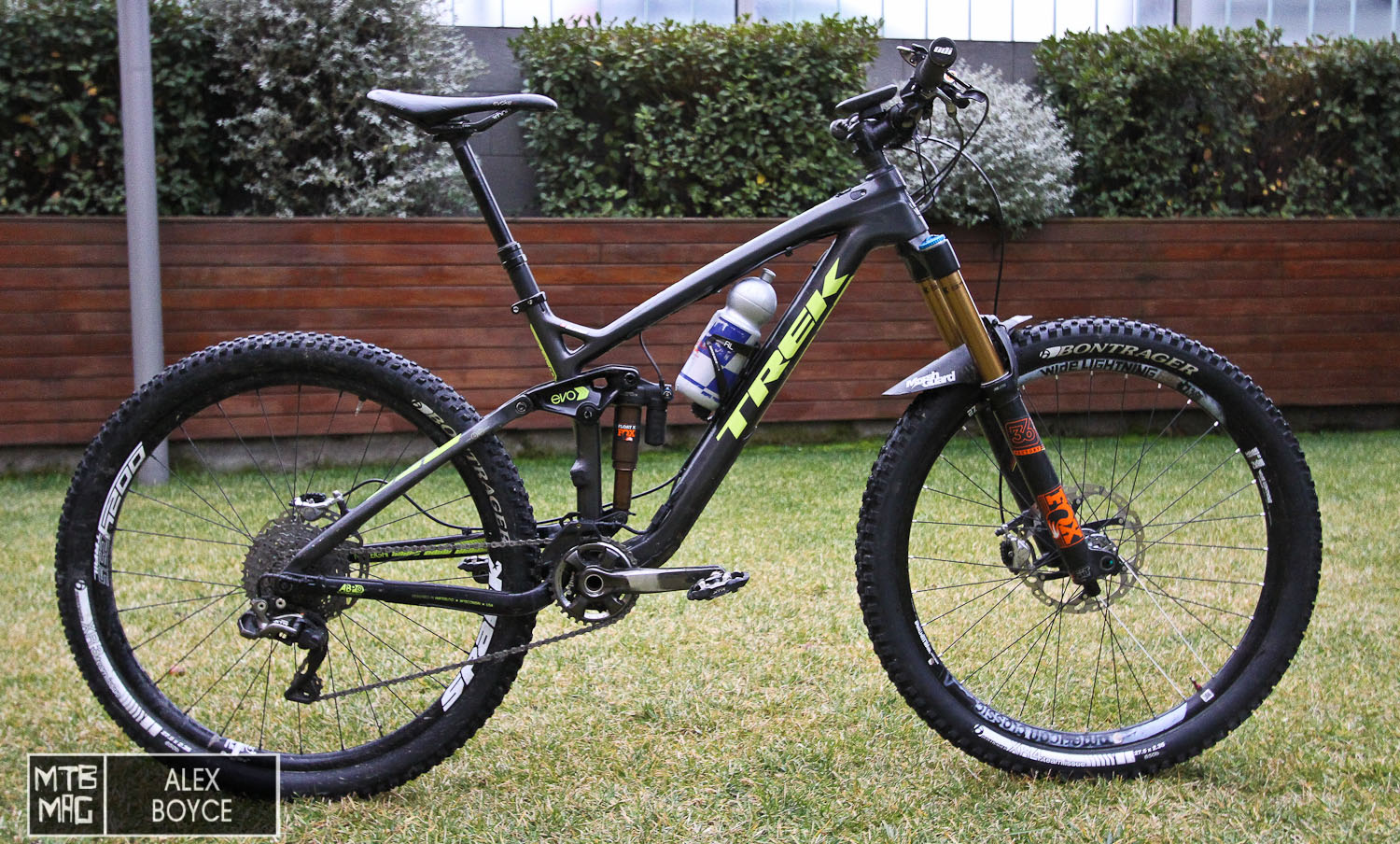