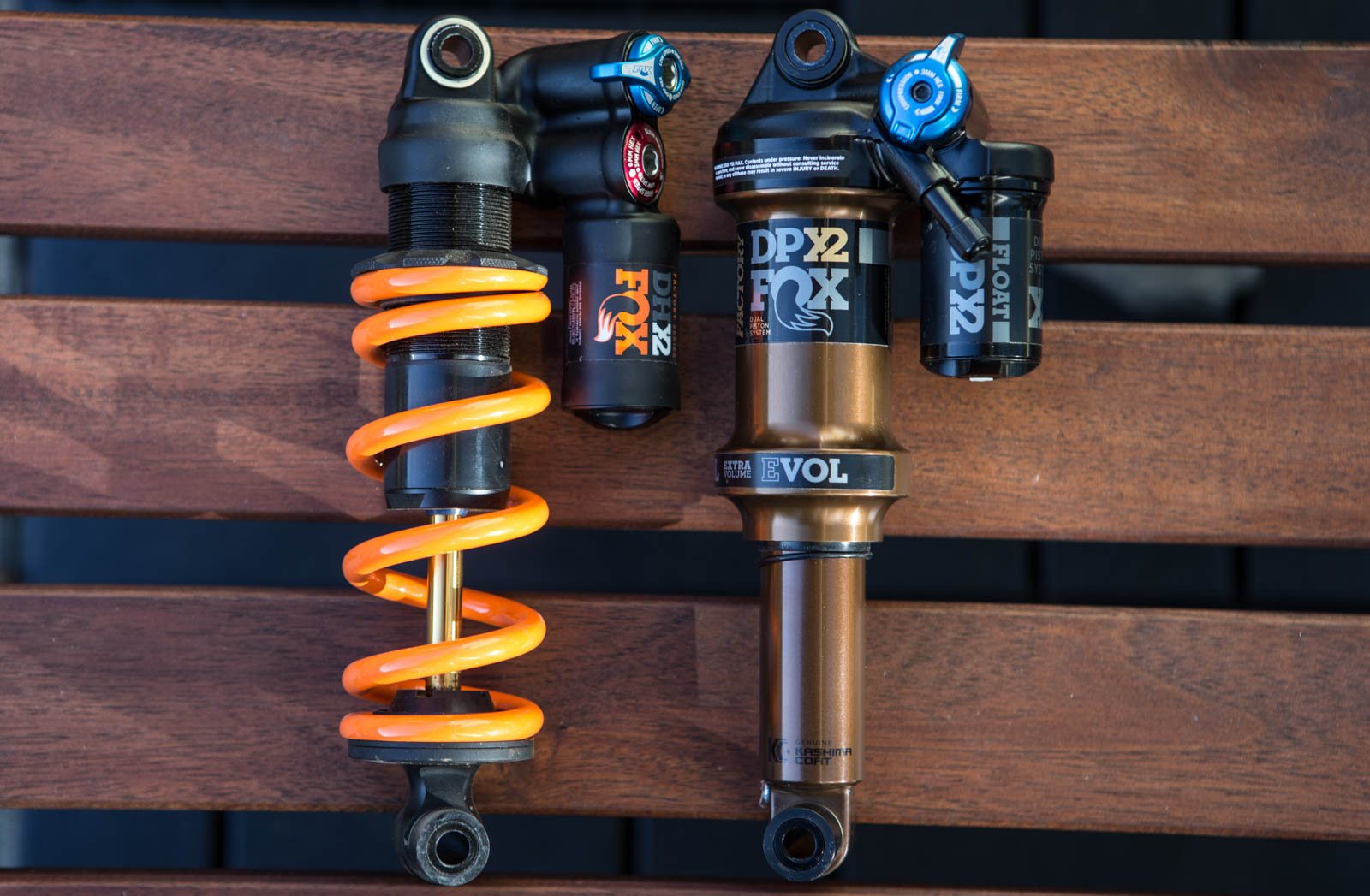 Coil vs Air: On Trail Comparison

Coil vs Air: On Trail Comparison

In the last few years, coil sprung shock technology has improved a lot in terms of weight and climbing performance. On various models it is possible to lock out the shock with a lever to pedal efficiently on every kind of climb: from the most technical ones to the ones on asphalt. This option makes coil shocks appealing even to Enduro World Series racers, especially with their descents being more similar to DH tracks than what mortal people normally consider an “enduro” descent.

The MTB Mag crew got in touch with this new generation of coil sprung shocks during the new Giant Reign test, equipped with a Rock Shox  Super Deluxe Coil RT remote, to lock it out quickly when needed. On the downhills, we were impressed: the rear tire was glued to the ground on every kind of terrain. On climbs, the lock out was one of the best ever experienced by us, working as a stable platform, at the same giving the rear wheel very good traction on technical climbs. 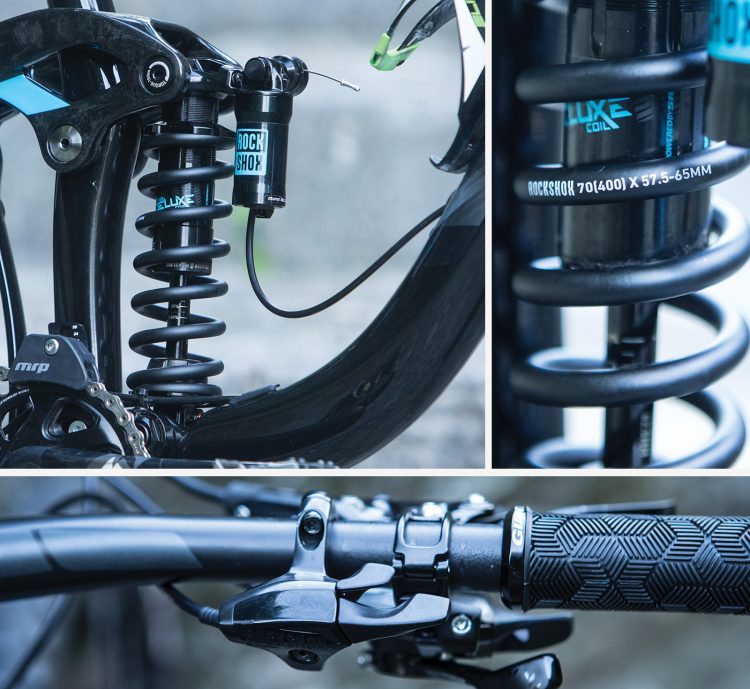 A guy from SRAM described our experience pretty well “You had an orgasm with our Super Deluxe RT”.

The bike is a Yeti SB 5.5 which we normally use for duration tests. Yeti claims openly that this frame supports also spring shocks, the shocks are both from FOX: 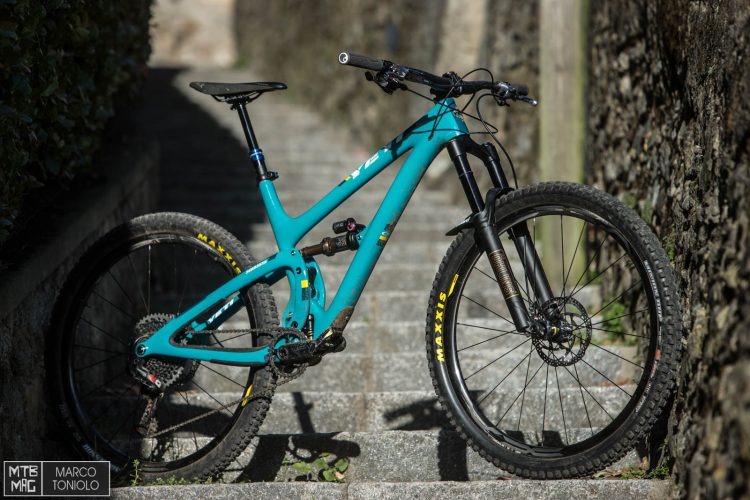 Don’t be fooled, the DPX2 is a solid performer; an air shock with piggy back, we consider it to be one of the best on the market, and for sure it’s well suited to a bike with 140mm of rear travel like the Yeti Sb 5.5. On climbs, the lock out is almost complete, while on the downhills the shock is sensitive yet supportive in the mid stroke. On the contrary, the Fox X2 lock out is not as efficient or up to task, therefore we opted for the DPX2. 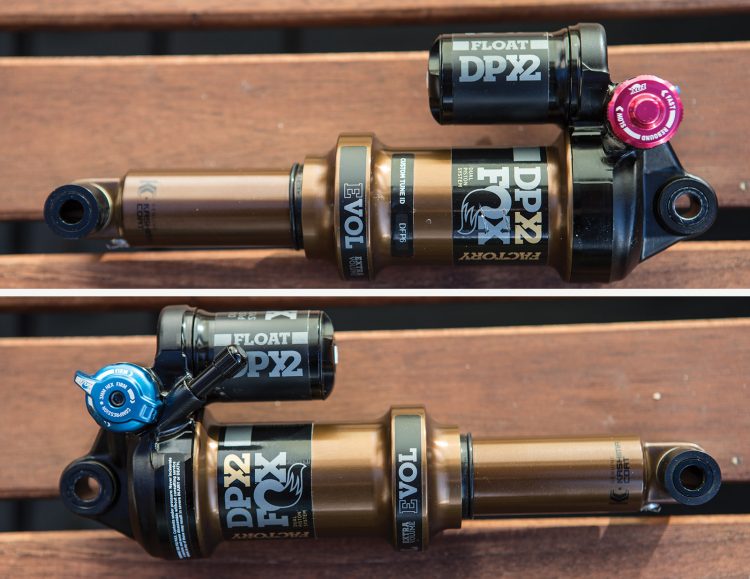 We called Fox, explaining our comparative test project with the DHX2, and we were asked which pressure the rider uses normally on the DPX2 and on which bike, in order to get the right spring rate. This is a negative side of spring shocks: you can’t simply adjust them with a pump, if they’re too hard or too soft you need to change the spring.

Anyway, we told Fox we normally use a pressure of 166 PSI. The DHX2 was shipped with its cool orange 500 lbs spring and we installed it onto the SB 5.5. 243 grams is the difference of weight between the two shocks, nothing exceptional, considering the DPX2 is one of the lightest piggy back shocks on the market. It took us three laps to find the right setting of the DHX2, since it has low and high-speed compression tuning as well as two rebound adjustments, all requiring a hex-key. Then there’s the quick lock-out lever, and the possibility to set pre-load using the threaded collar. For the record, we set low-speed compression at 7 clicks from full open, and high speed at 2 clicks. 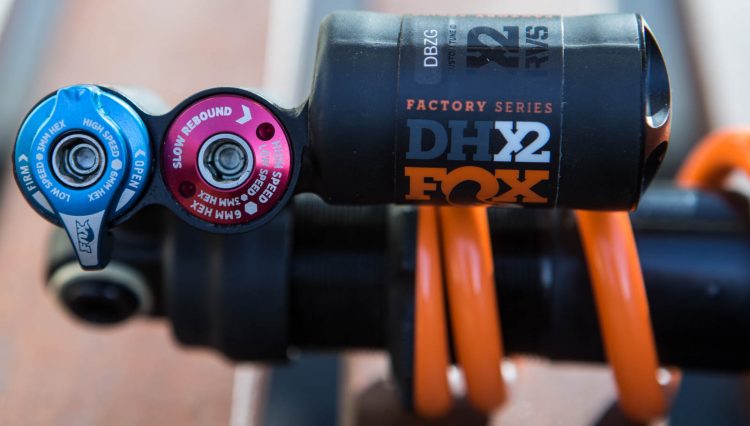 For comparison, the DPX2 is easier/simpler to set up: the blue knob adjusts the compression with three positions (Firm, Mid and Open), while the red knob controls the rebound. Compression is adjustable with a 3mm hex-key, turning the screw clockwise or counter-clockwise in the middle of the blue knob.

We do not examine in detail how the shocks work, since this theme has been already discussed here and here.

The comparative test was carried out on a trail we know very well: 240 vertical meters downhill, with fast and rough sections, flowy passages in the woods and slow/rough sections. I did 4 laps, switching shock every time. In the end I did 2 laps with the DPX2 and 2 with the DHX2. We shot a short video to show the track. It takes me approximately 4 minutes for one lap without stopping.

The first part of the climb is very steep, then it turns into an easier asphalt road.

The DHX2 has only two positions, open and closed, while the DPX2 has three, the middle one to be used on rough climbs. Let’s say the DHX2 in closed position behaves like the air shock between the positions Mid and Firm, so it climbs very well. Most of all, it provides more traction than the air shock does in Firm position and it’s also more supportive than the air shock in the Mid position. A nice surprise, which confirms our impressions riding the RS Super Deluxe: even with locked compression, the new spring shocks have better absorbing capacity and they still don’t waste energy.

Downhill, the DPX2 is a great shock, as we wrote in the dedicated test: very sensitive, good mid-travel support and very consistent on long and rough descents. A great product which weighs only 430 grams, it works well also on enduro bikes with long travel, such as the Pivot Firebird, on which we tried it the first time (170mm of travel). It is so easy to adjust according to the rider’s weight, and to set up – we would recommend it to those who are not suspension experts, or who don’t want to waste too much time with tuning.

The DHX2 is different: it requires some time to find the right setup, once you have found it I can give just two suggestions: add some pressure to the rear tire and grab the ‘bar tight, because you’ll find yourselves riding lines that you normally wouldn’t, and at incredible speed! The rear end was glued to the ground, no matter what we faced, and don’t forget the Yeti SB 5.5 has “only” 140mm of rear travel. 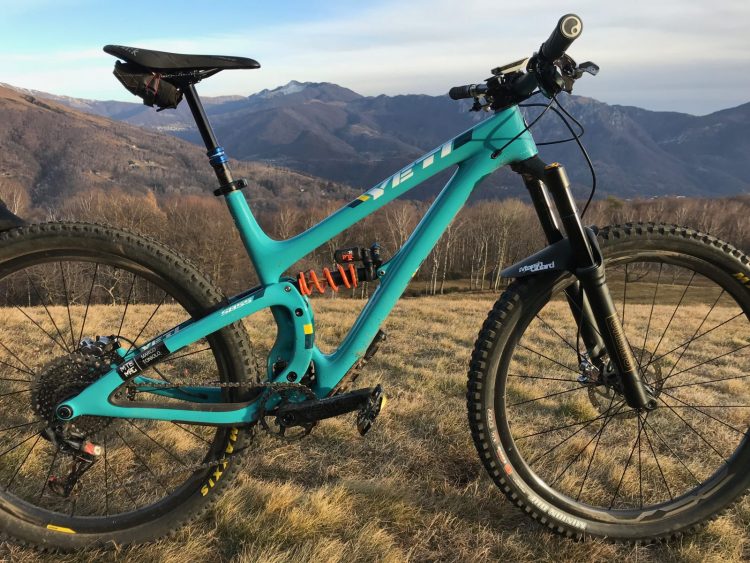 Suddenly those big rough steps aren’t scary anymore because the bike stays calm and you can comfortably face the next section with unwavering commitment. Trying the two shocks back to back, I could clearly feel the different behaviours: with the DPX2 the bike is more nervous and easier to pump on jumps and obstacles, with the DHX2 it tends to eat up all obstacles, but the bike requires more physical power, especially on changes of direction, where the rider must give a strong input, since the spring tends to soak up everything, including what comes from the rider.

Given the season, which doesn’t allow for riding laps on a 1000 vertical meters downhills, it is hard to judge the performance on long descents. For sure the DPX2 heats up more than the DHX2, and consequently its performance decreases faster. I must admit, though, that last summer, riding down the Monte Tamaro, Switzerland, (1300m vertical meters down) on the Firebird, this issue didn’t affect the performance. All in all, it is not one of those old air shocks with no piggy back, which heated up too much.

The suspension of the Yeti SB 5.5 is linear along the whole travel, it gets more progressive only in the last few millimeters of travel, while at early travel provides good support, and doesn’t wallow under the rider’s weight (on steep climbs). That behaviour was very similar with both shocks, and even though Fox fine-tuned both for the SB 5.5. In the end I could use the travel well and traction was very good with both configurations. If you ride bike park, you will probably need a harder spring than what you use normally to avoid bottom outs.

If I were asked what shock I would buy between the two, I’d have no doubts: DHX2. It weighs 200 grams more, but you get awesome downhill performance, extreme rear grip with the wheel glued to the ground, and the roughest sections become pure enjoyment. Furthermore, on climbs it provided better traction than the DPX2, thanks to the quick lock-out lever. In brief: with the Yeti SB 5.5 you can pedal well with this shock, and on downhills – the faster you go the sicker it gets. Hard to beat.