Crank Brothers aren’t exactly known for their flat pedals, but rather they’re best known for their clipless offerings. Recently the So Cal brand took a step back and redesigned their flat pedals with a bit of an unconventional approach; simply put they offer them in two sizes: small and large. Dubbed the “Stamp” we first came across them when we received their new, and much improved Highline seatpost. We’ve managed to stay fairly busy with flat pedal tests lately, some of which was on both the small and the large version of the pedal.  Admittedly, we haven’t had tons of time on either size but rather just enough on both that we could draw comparisons between the two and come to some solid conclusions about ride quality. 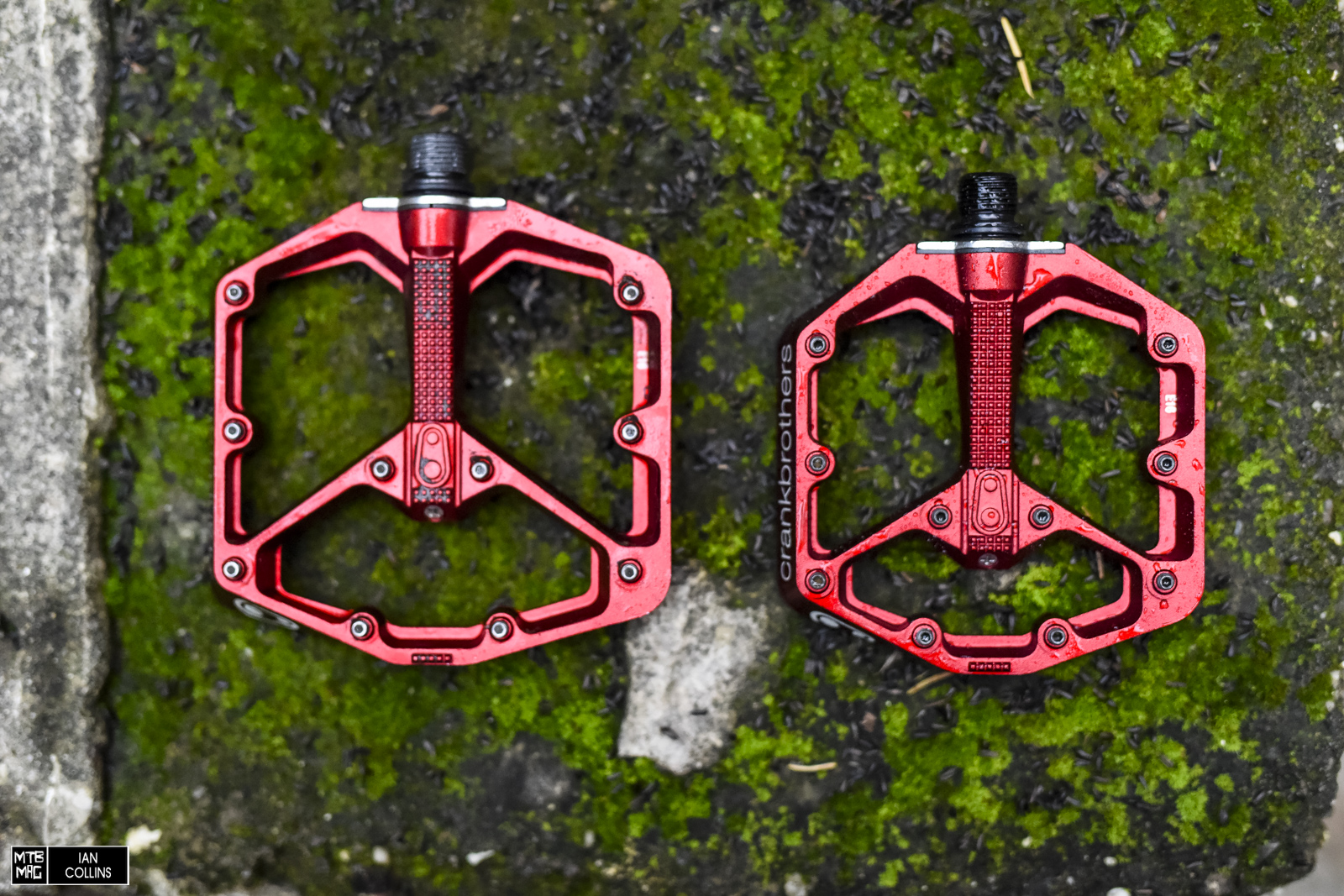 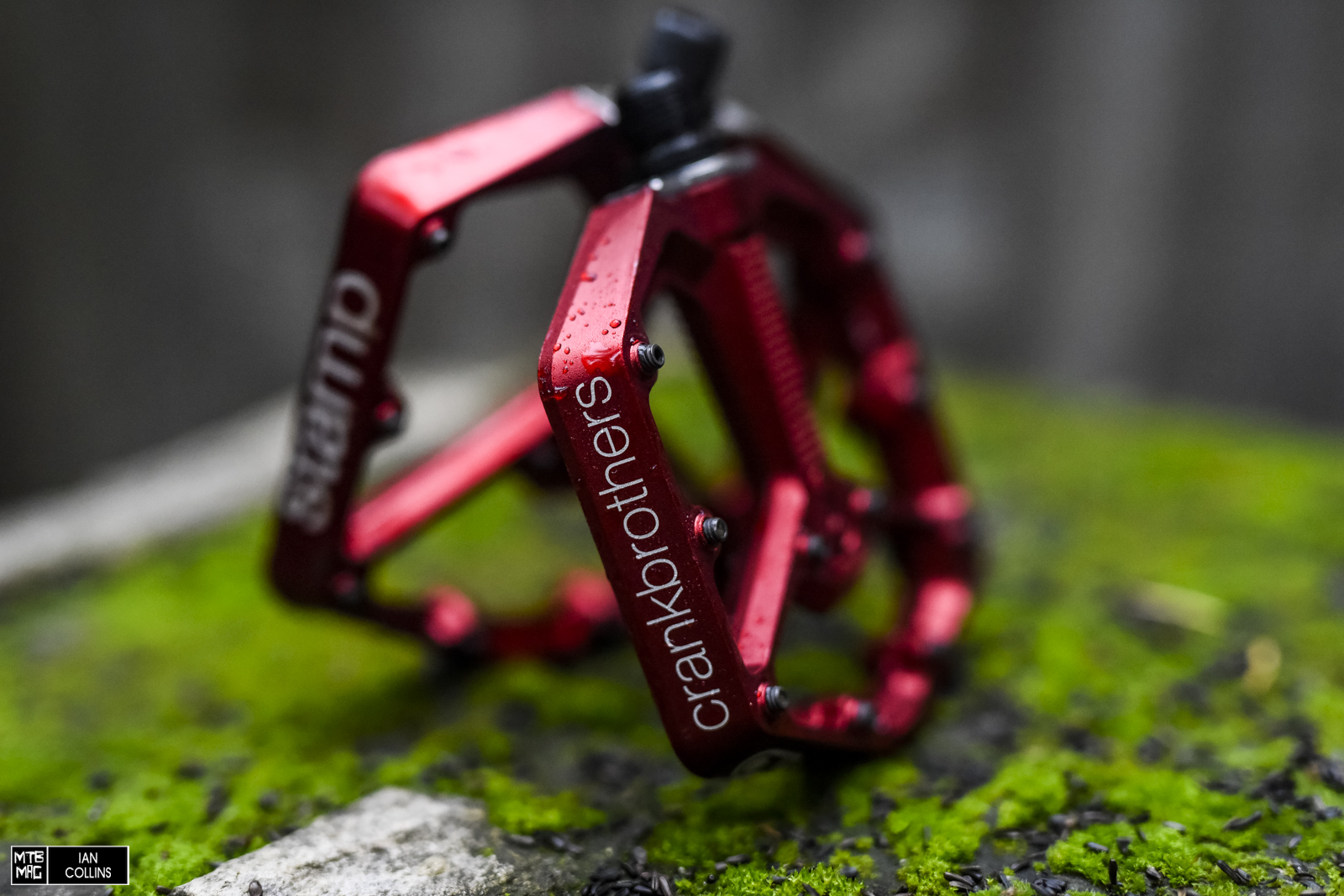 Initially we were a bit surprised to see carbon copies of a pedal in two different sizes. To some degree however, it does make sense to offer consumers size options in the pedal world. We have handlebars in all different widths, varying crank lengths, stem lengths, dropper post travel increments, etc. You get the point…Anyhow, at a size 10.5/44 our tester was on the smallest end of what’s recommended for a “large” and just outside of what’s recommended for a “small”. 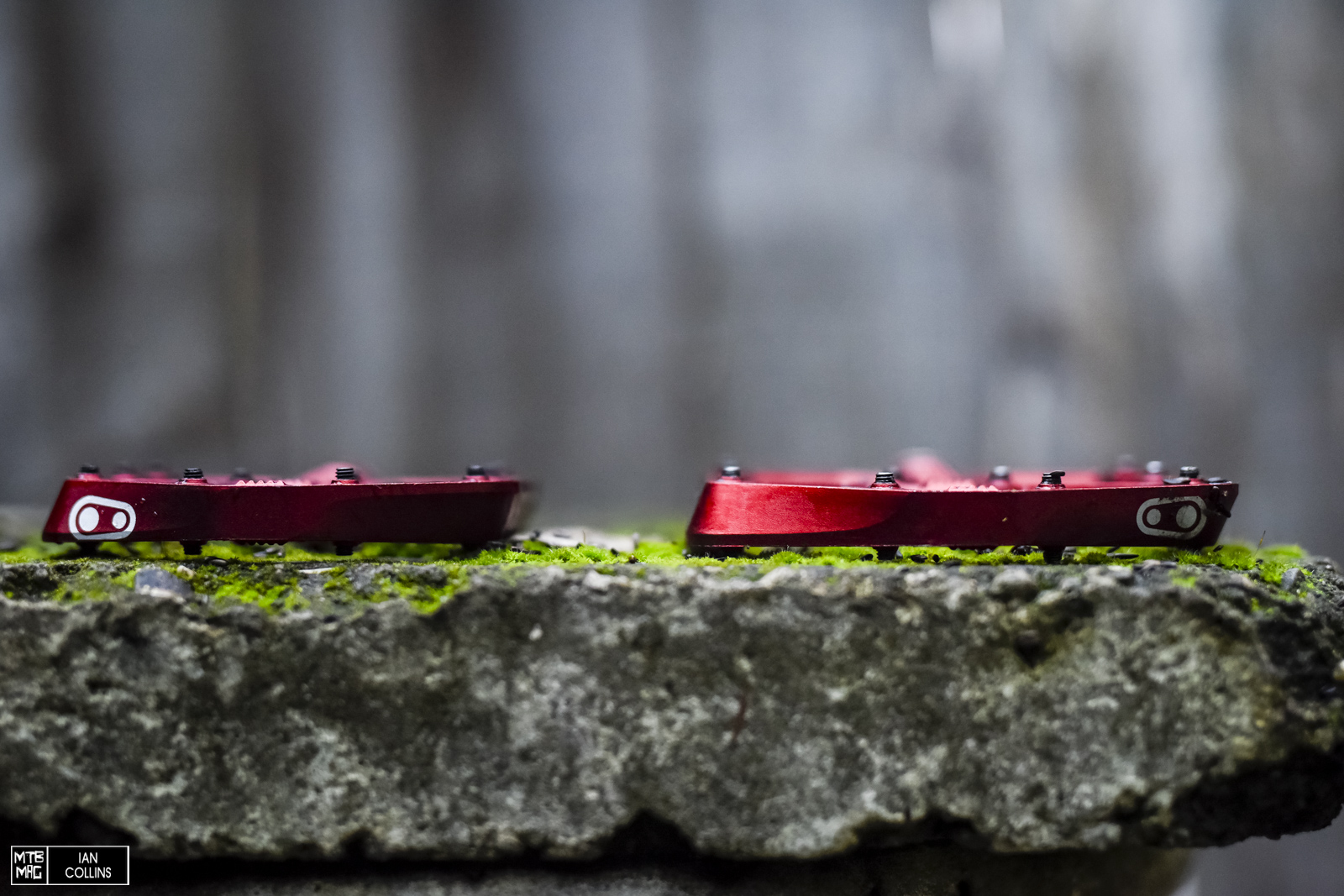 The Stamps don’t have a ton of concave in either size, but to a varying extent that can be fine tuned with adjusting your pins. If you want a deeper concave, you can run longer pins on the edges of the pedals and shorter pins in the middle and surrounding the axle. We like the idea of the textured section on the platform itself as it adds a bit more grip without requiring quite as many pins. The leading edges of the platforms are angled in a way that they should resist hanging up on rocks. Aside from the obvious, the Stamps feel and look like nice pedals that come in at a good price at a reasonable weight.  Speaking of weight, they’re one of the few products we’ve tried that came in under the claimed weight(see: details) 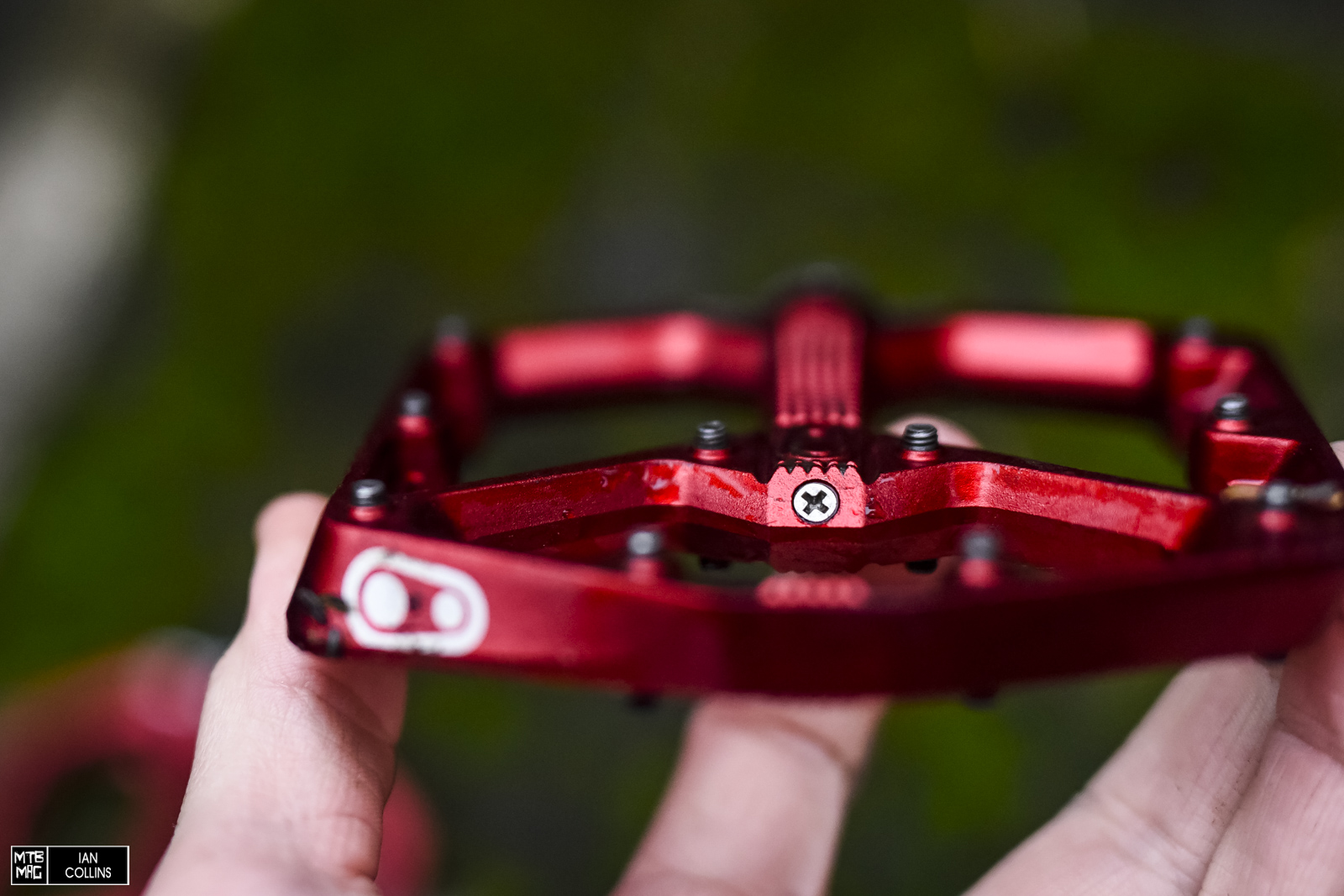 We started off running the large Stamps on our trail bike(s) and the size small on our Trek Ticket S which frequents pump tracks and smedium sized dirt jumps. The first thing that we noticed about the large Stamps was their size. It was easy to settle into a comfortable spot, yet the fairly short pins still made it easy to make adjustments to footing while riding, something we appreciated. They did feel a bit big though. With the small Stamps we actually quite liked them while screwing around on the small bike but didn’t really jive with them on the trail bike. In rowdy terrain it was hard to find the sweet spot and we much preferred the larger platform.  Although in all reality, being stuck between the two sizes we honestly would love to just split the middle and run a pedal that’s around 105mm X 105mm. However, keep in mind that our shoe size does fall right in between the two sizes in the Stamp. 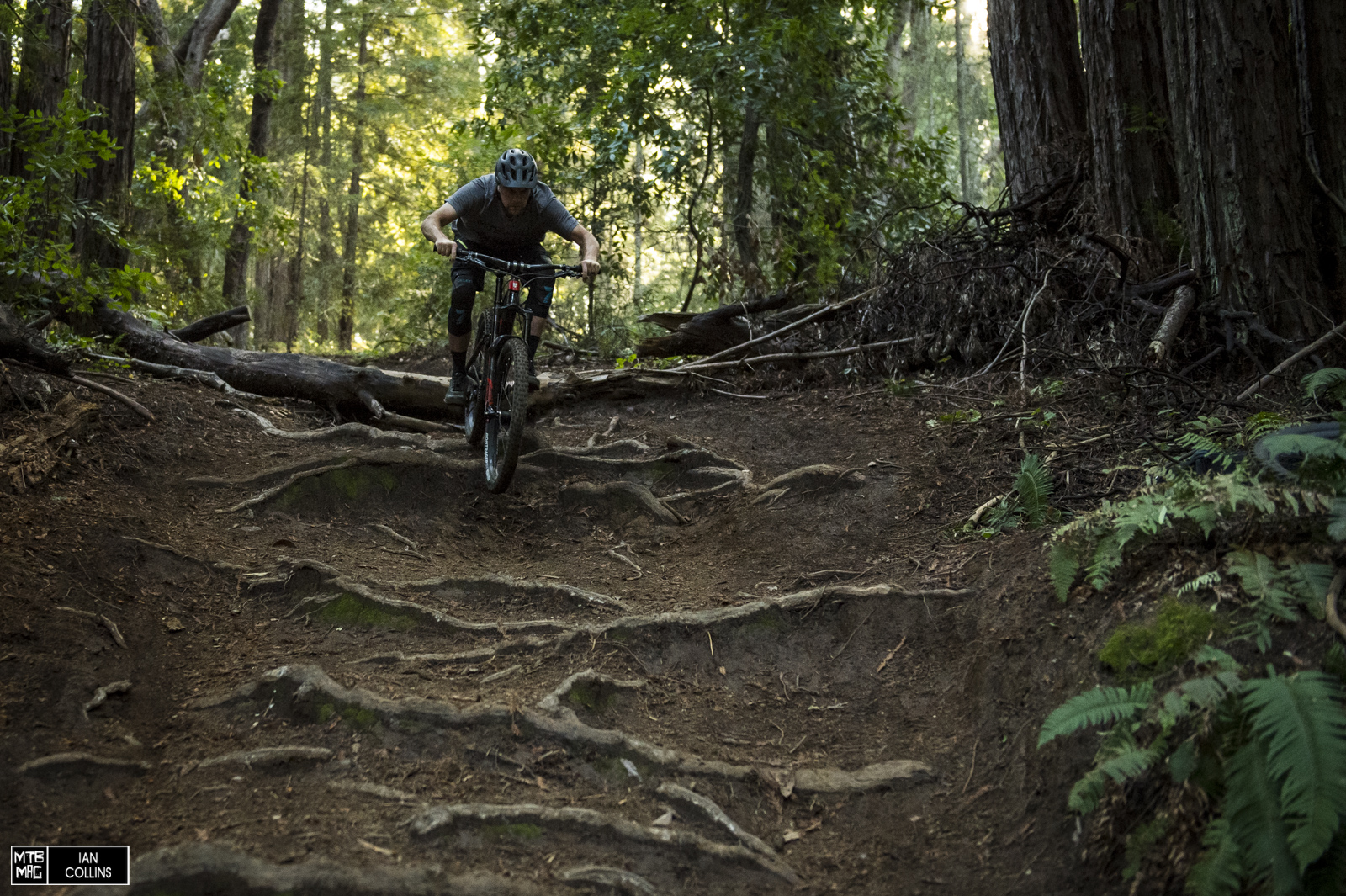 As far as durability is concerned we have to admit, we haven’t had any massive rock strikes but we’ve dragged the Stamps through their fair share of loam and firm dirt, plus had a few grazings with some roots.  The pins seem well secured and are easy to adjust and replace. The axles are tough as nails and haven’t bent yet in either scenario – jump casing on the play bike or blasting g-outs on the trail bike. The bearings and seals are all running smooth and free without play; the Stamps ride nicely and are in it for the long haul.

As a size 10.5US/44EU, these pedals left our tester scratching his head.  While a size that split the middle between the small and large would have a much greater appeal to him in particular, we see the Stamps making a great deal of sense for riders closer to the extreme end of the spectrum in terms of foot size and/or pedal size preference. As for long term durability, we haven’t had tons of time on one size or the other, but by all indications the Stamps are holding up nicely and show no signs of shortcomings from a design standpoint; especially given consideration for Crank Brothers’ reputation with clipless pedals. It’s hard to find flaws any flaws with the Stamps, but if you’re in the size 9.5-11US/42-45EU range and prefer a middle of the road fit, they might be either too small or too large.