Mondraker continues their strong shift towards carbon fiber. Initially presented on the Foxy Carbon in April 2014, carbon fiber also found its way onto the Summum Carbon last November, and now moving onto the Dune Carbon, thus completing the main categories of Mondraker’s range. 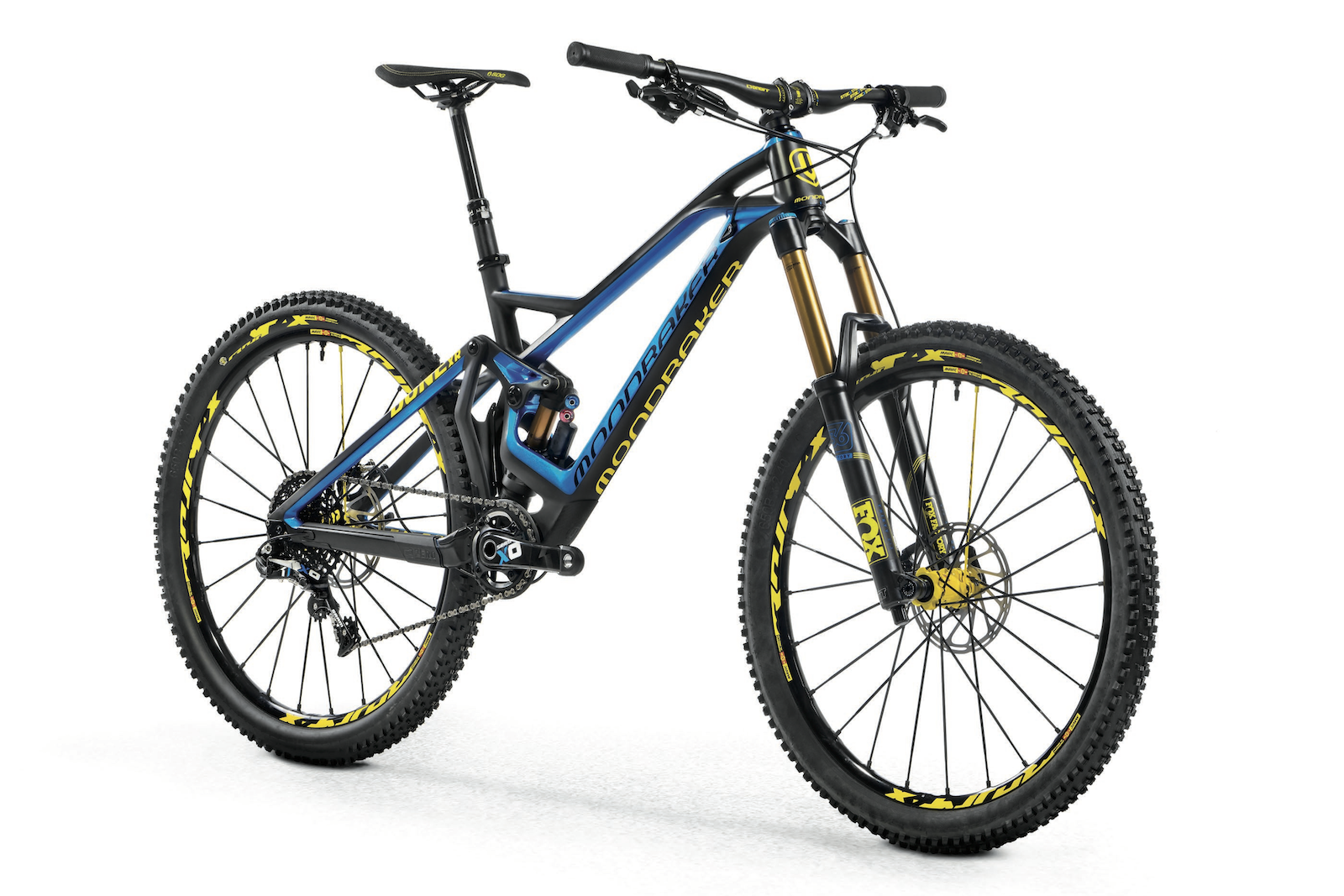 With these new products and technologies, Mondraker has significantly increased its market. There is talk of a global increase of 38%, reaching 51% in the international market, where Italy ranks second in sales after the United Kingdom. The driving force of this growth are the Summum Carbon and Carbon Foxy – some of the best selling bike in the Iberian. Now Mondraker will likely just get stronger by adding the new Dune Carbon, which certainly will have an important role in the Italian territory, more so than in other markets as it caters to the Enduro sector. For 2016, Mondraker plans to organize testing of its products throughout Europe and to educate and update distributors and retailers on new technologies, so that they can better support each customer.

The Carbon version of the Dune arrives in 2016 as the sixth version and its eighth year of production. The first version was born in 2009 and was the bike with which Mondraker introduced the Zero suspension system. In 2010 the frame changed dramatically thanks to the front triangle’s Stealth construction, and in 2011 the rear end was updated with the same technique. In 2013 Mondraker introduced Forward Geometry, then in 2015 the Stealth Evo construction. Now the Carbon version completes its evolution.

For Dune Carbon three versions are offered, all with the same frame. The XR – top of the range as well as the most evil looking of the three will be available in September(as a complete and as the frame only). Since the Fox Float X2 that mounts on it will not be available before then. Other versions, the RR and R, will be available from mid-July. For now, we’ll take a close look at the characteristics of the new frame of and details of the XR.

The Dune Carbon offers the latest developments in technology that have made the Spanish brand famous. First, the Stealth Carbon structure of the Dune’s frame represents the third application, as well as the most evolved. It combines robustness, light weight and rigidity from what they’ve applied to the Foxy Carbon and later on to the Summum Carbon. The Stealth Carbon Dune saves 540g compared to the previous model in aluminum, for a total frame weight of 2450g without shock. The cross section of the tubing takes a different shape, as we see in the image on the right, with rounded edges and a trapezoidal shape – said to improve structural rigidity and strength.

This structure further reduces the thickness of the tubing, which as you can see in the diagram, is really thin. The interior finish is perfect and very smooth, thanks to a highly advanced construction technique that Mondraker has developed in collaboration with a particular company who specializes in producing carbon frames. 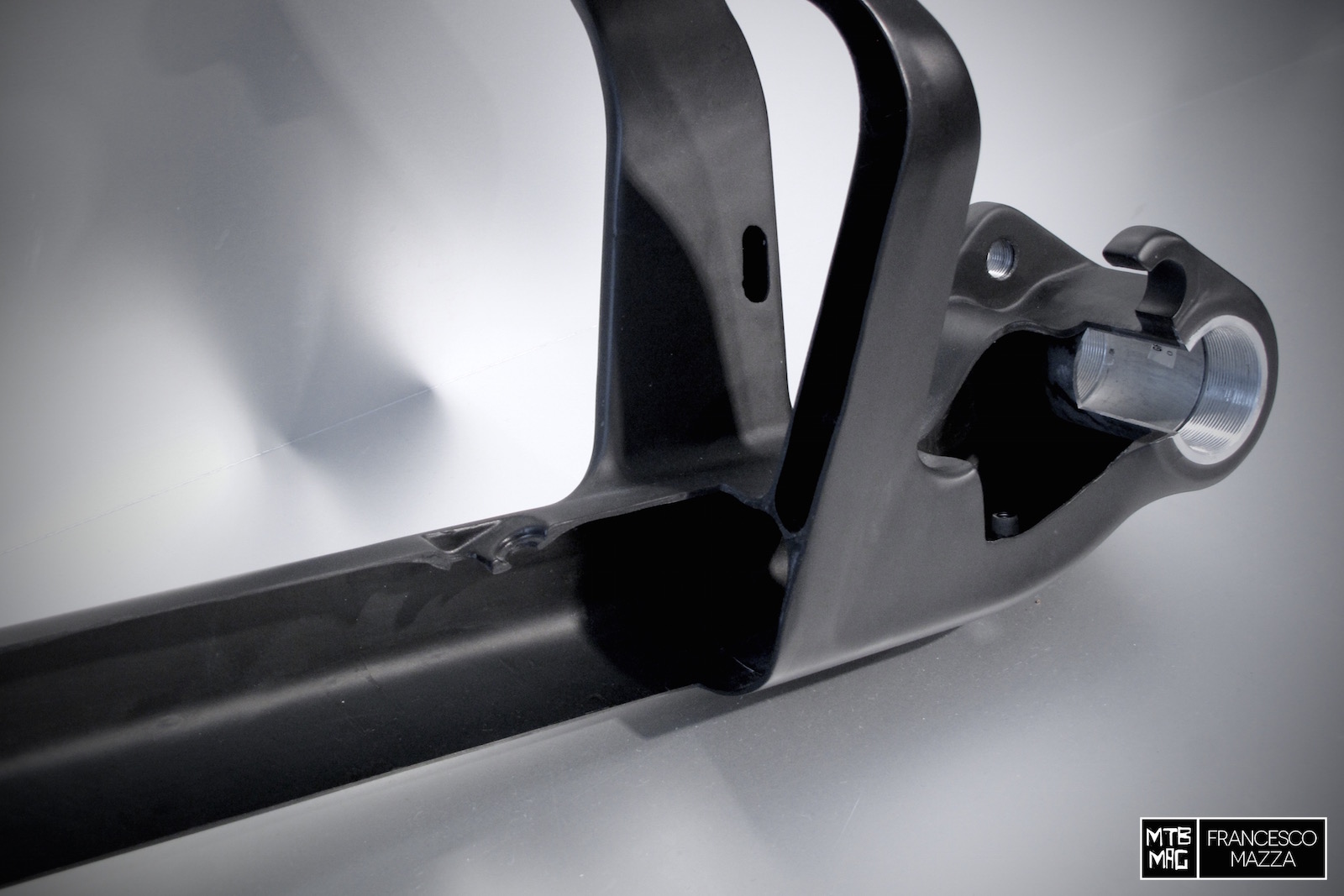 The shell of the bottom bracket and the ISCG inserts are made from an aluminum block, while the areas subject to the most stress and torsional flex are made with carbon fiber layers that are triple the thickness. 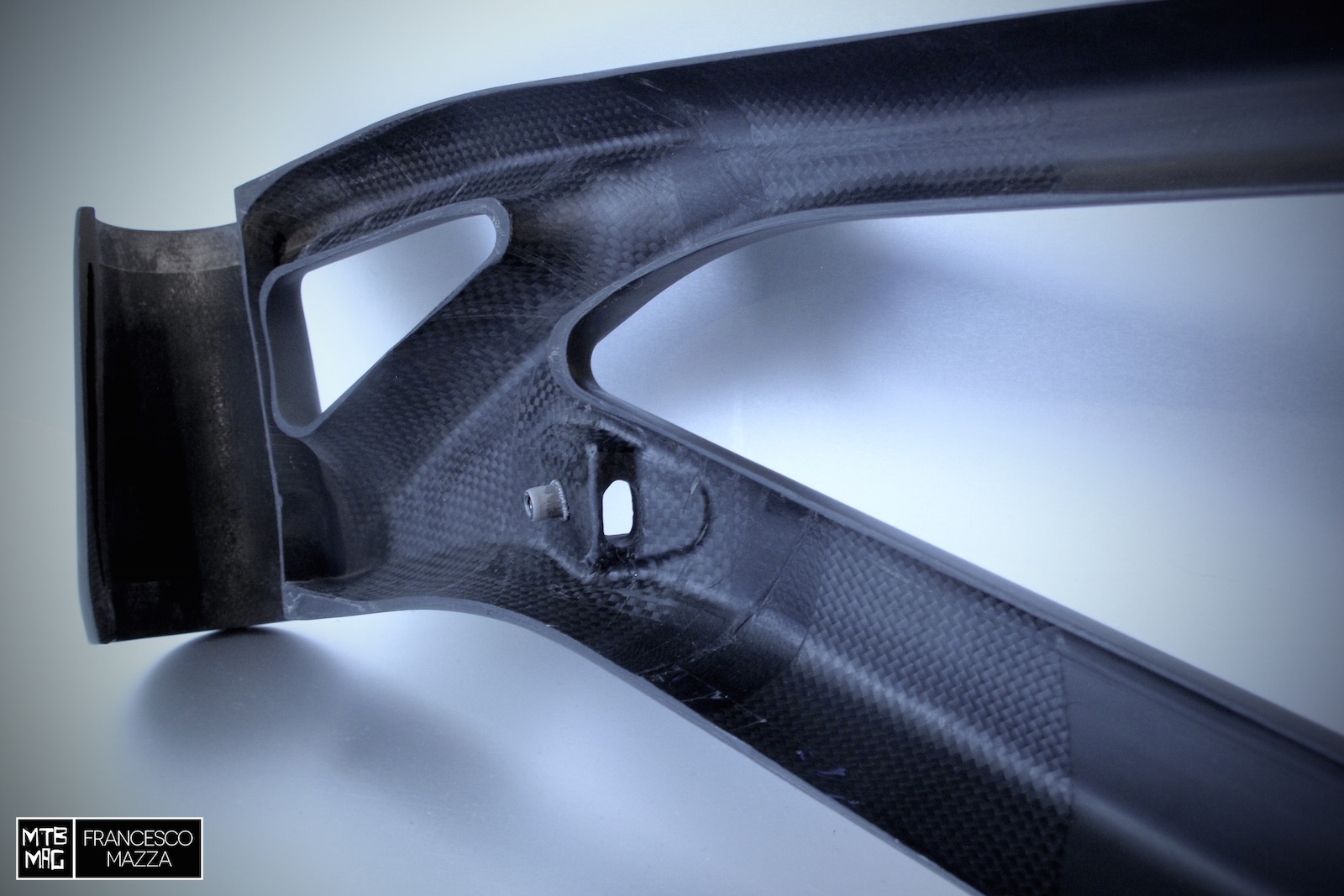 As with other Mondraker frames like the Foxy Carbon and Carbon Summum, the frame design is inspired by the automotive industry and with avant-garde but clean lines that blend on smooth surfaces. Keeping with Mondraker’s tradition, the Dune Carbon utilizes Forward Geometry which provides a longer front triangle to improve traction and stability, with a particularly short stem – 35mm in this case. The short stem allows Mondraker to bring the reach to a normal length within each size, while it also keeps things steering quickly 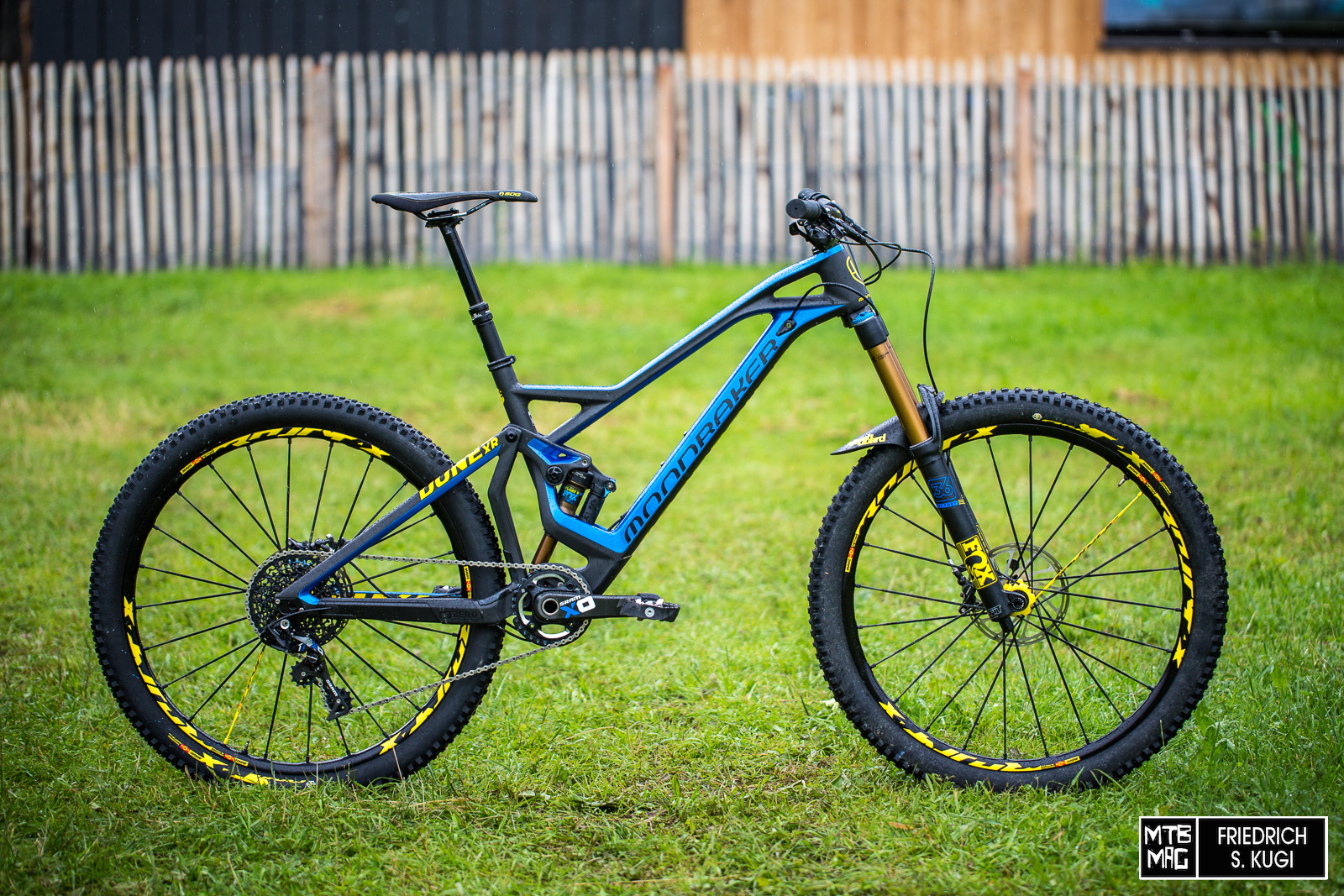 Regarding geometry, the head tube angle can be adjusted through its headset cups, which come bundled with the XR and with the frame kits. They can be ordered separately as an option for the RR and R versions. The standard configuration is set at 0 °, and parallel to the head tube of the frame, leaving the steering angle of 66.5 for the RR and R and 66 °for the XR version due to the greater length of the fork. The cups allows the user to vary the steering angle by +/- 1 ° depending on how it is oriented. The frame features a reference mark to properly align the cups. 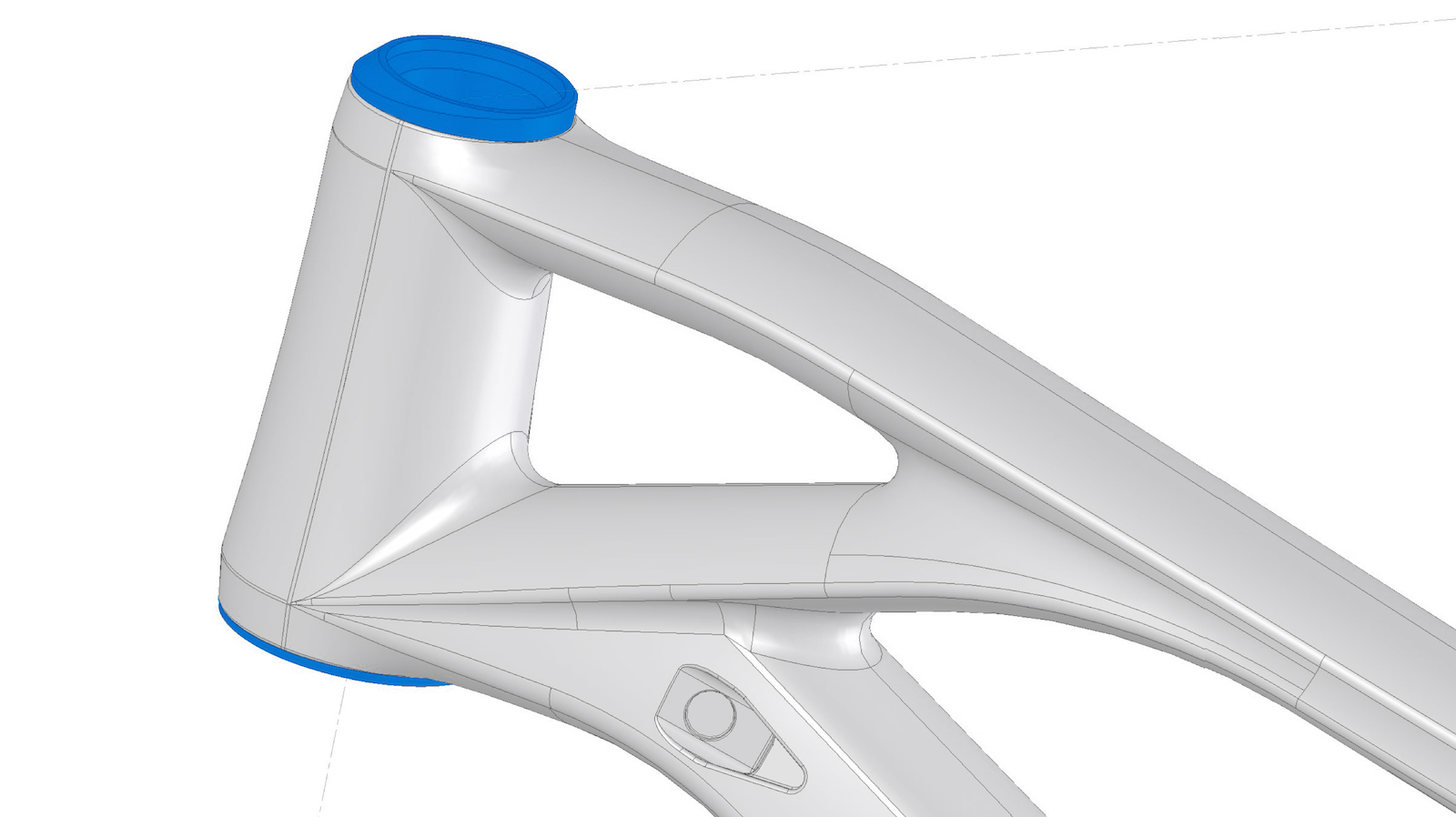 The length of the chainstays can be adjusted via two flip chip style dropout inserts: 430mm or 440mm. The standard configuration is set to 430mm in length. The inserts come standard with the XR and with the frame option, and can be purchased as an option on RR and R. 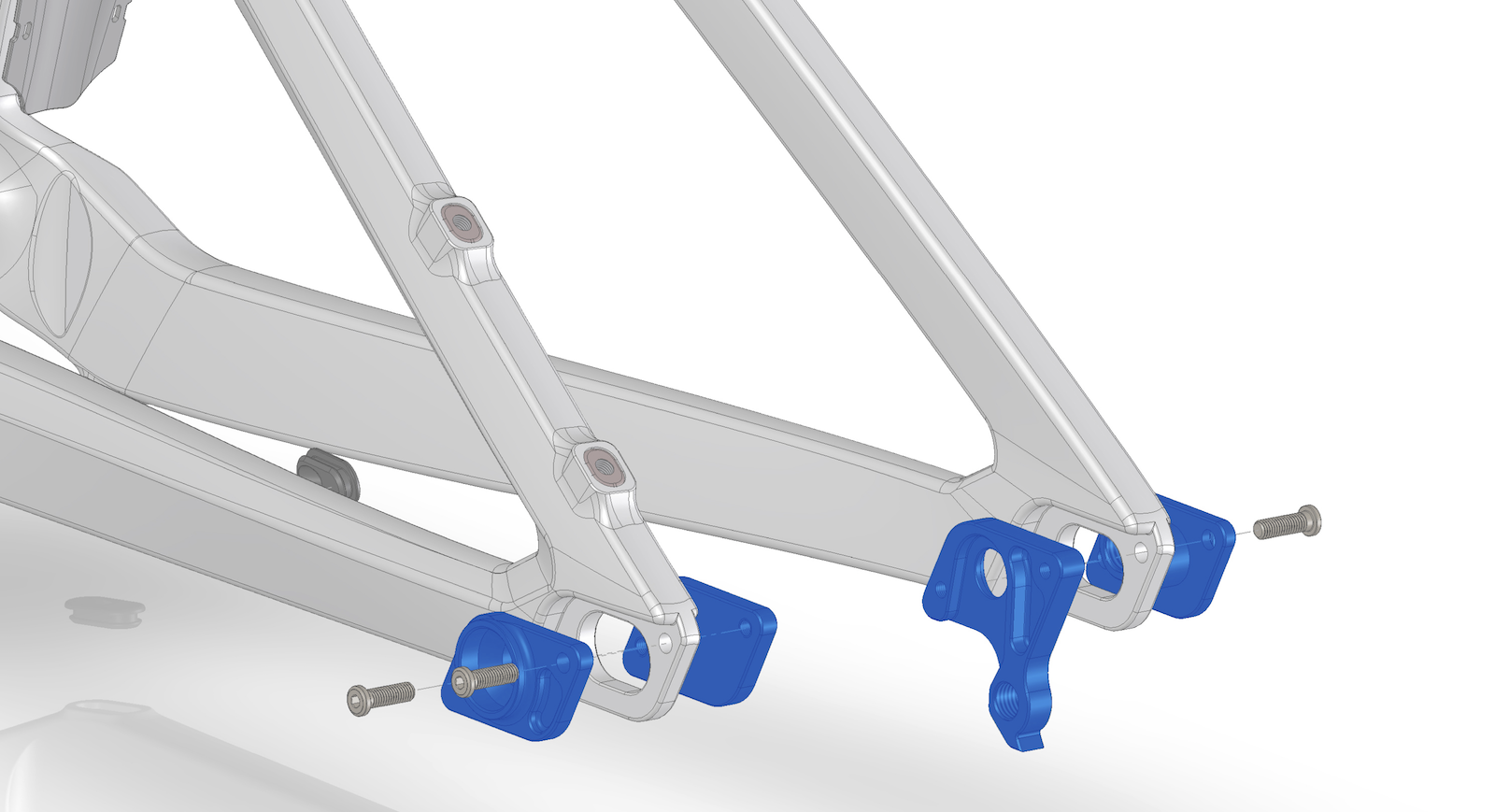 The suspension system is the proven Zero Suspension System, now synonymous with Mondraker since 2009. It’s a virtual pivot actuated as a Full Floater. In other words, the shock is compressed at both eyelets rather than anchored to the frame on one end. This mechanism allows Mondraker’s designers some leeway in finding the best compression curve in relation to the intended use of the bike on which the system is being applied. In the case of Dune Carbon, its compression curve is strongly suited to downhill, and has a great resemblance to the Summum Carbon from which it draws inspiration.

On the Dune Carbon we find, for the first time on a Mondraker, a carbon upper rocker, useful not only to save weight but also to increase the overall rigidity of the frame. This way, bearings and pins on the Dune Carbon undergo less stress and thus prolong their efficiency. The Dune XR Carbon’s 160mm of rear travel is managed by a Fox Float X2 rear shock – Fox’s new 4-way adjustable air shock, but that won’t be available until September. So, on the XR we rode during the presentation, a Fox Float X 3 position was bolted up(It is fitted as standard on the RR). In any case, for the intended use of the bike, we did not mind having the opportunity to quickly switch between the three positions : Open, Medium and Firm (now Firm equates to nearly a complete lockout). The Float X2 will offer a much broader range of settings that allows very precise tuning and customization, on which you can operate thanks to the independent adjustments, but we can consider it a product suitable to meet the needs of racing, while the average rider could find themselves confused with the tuning and wishing for a lockout. 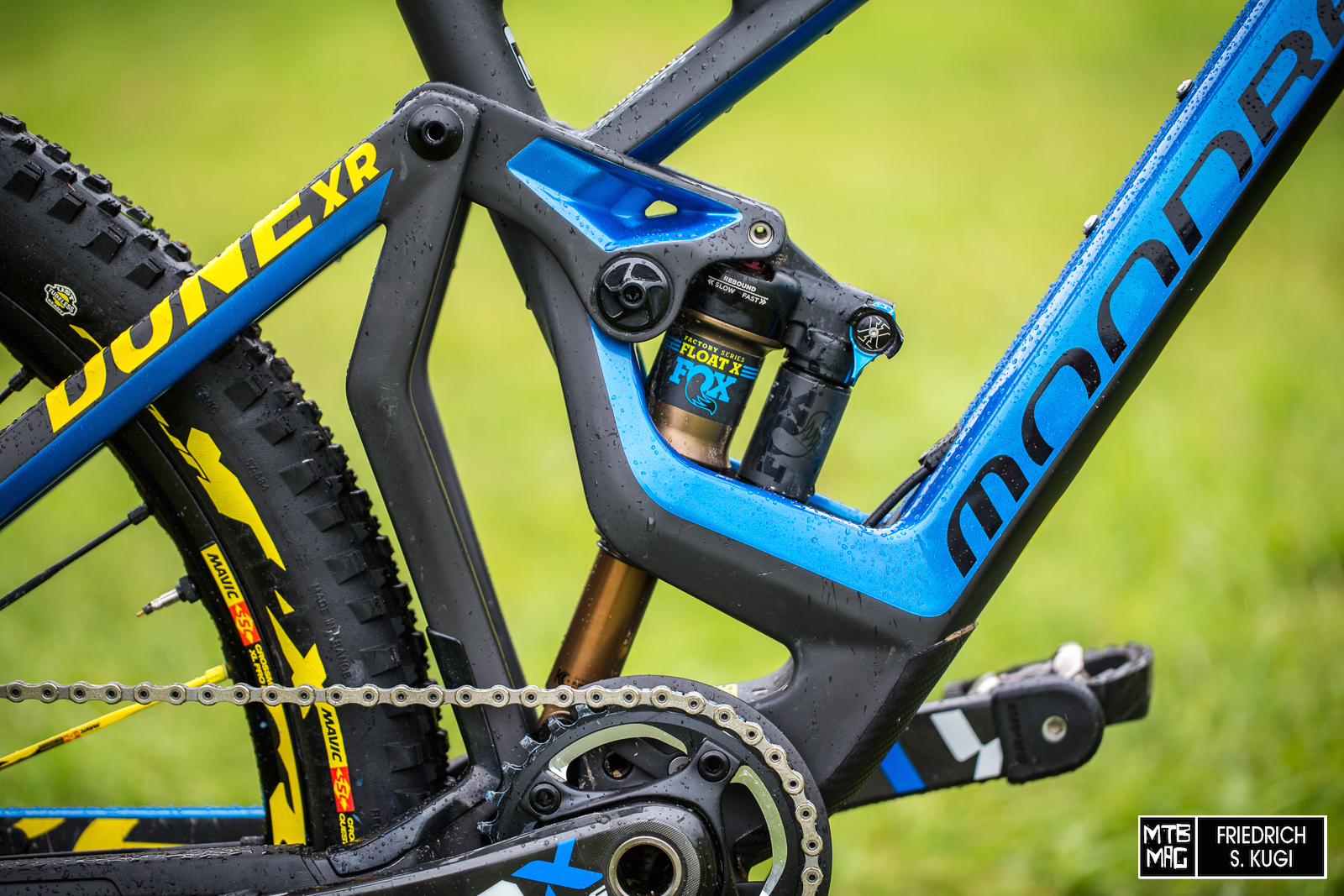 The front suspension is a Fox 36 with 170mm of travel, adjustments for high and low speed compression, rebound and air volume. The axle is a handy QR 15mm and the decals are customized for the yellow, blue and black Dune Carbon. The drivetrain is full SRAM, with a GXP bottom bracket, and a 32 tooth X-Sync chainring. On the Dune Carbon we were happy to see 1X, but it is nice that there is the possibility of mounting a front derailleur.

To protect the chain and chainring, Mondraker integrates a removable shock absorbing plate that attaches to the frame via the ISCG tabs. Brilliant. 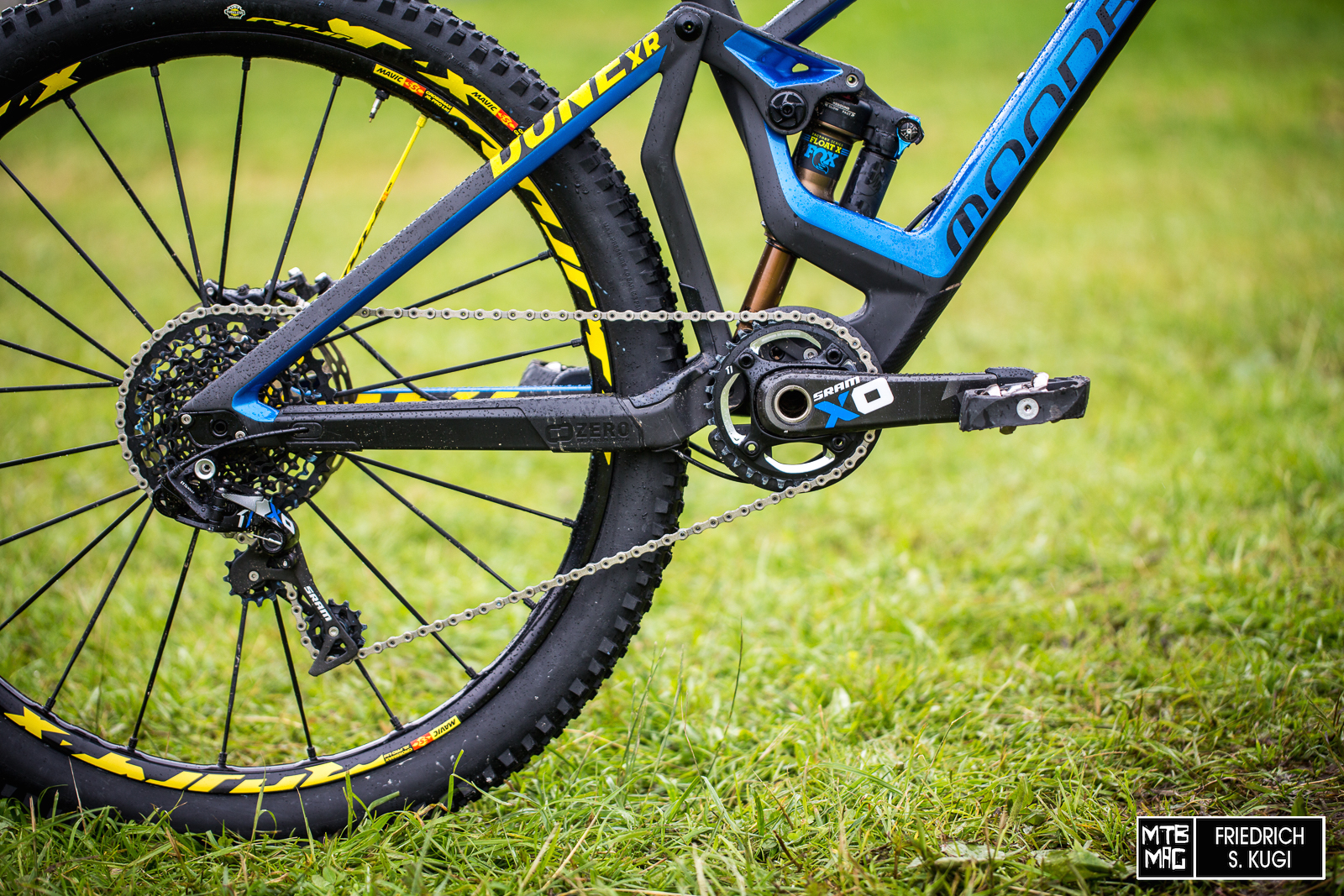 The flagship bike is committed to the Mavic wheelsystem, with Crossmax XL Pro LTD wheels and tires. Although they we’re not quite sure exactly which conditions the tires were designed for, they pleasantly surprised us in the muddy conditions we tested the bike in. a. The handlebar is an Onoff Stoic Carbon by 780mm wide by 13mm rise, and bolted up to a Onoff Stoic stem at 35mm in length. SRAM components on the handlebar allows a very orderly arrangement of the controls, thanks to the MatchMaker clamps. Braking, shifting and even using the RockShox Reverb Stealth was seamless and logical. Even the integrated cable helps clean up and streamline the aesthetics of the Dune Carbon. 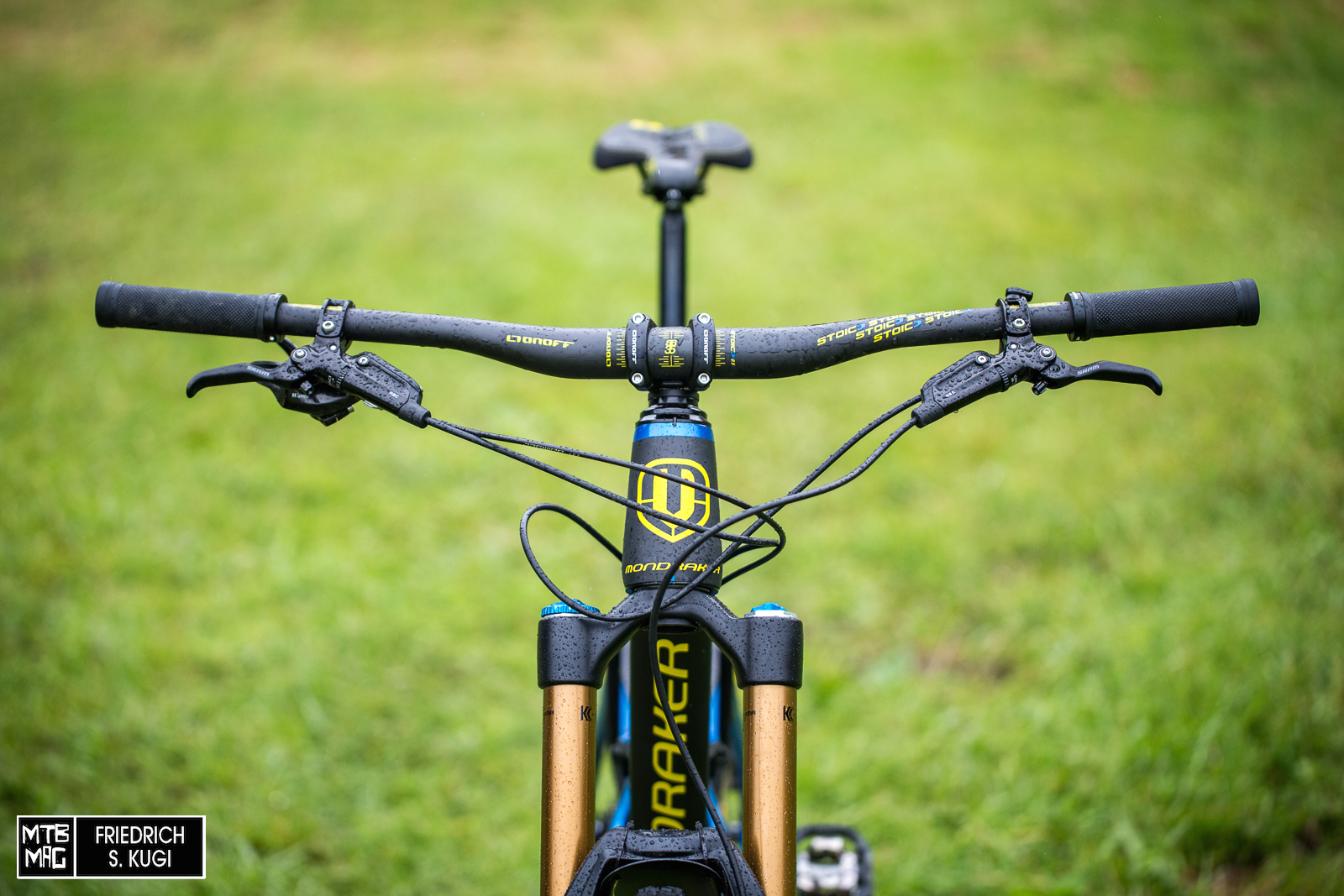 The SRAM RSC Guide brakes and Centerline 180mm diameter rotors both front and rear are a proven setup – proven to be up to task with the demands of enduro racing. We are used finding out all of a bike’s nuances and handling aspects pretty quickly and then – over time, during a proper field test we get to really hone in on every detail and aspect, plus spend some time tuning suspension, playing with various tires and spring curves, etc. Generally however we can at least get a solid gauge of how a bike will perform on our first day testing it.
On our test day, the weather was very bad and therefore trials were limited a few chairlift runs, thanks to the gondola lift in Leogang (Austria) bike park. That said, under a continuous rain we were limited a bit by the conditions that didn’t allow us to seriously test the new Dune Carbon. Below we’ll discuss what little we did learn. 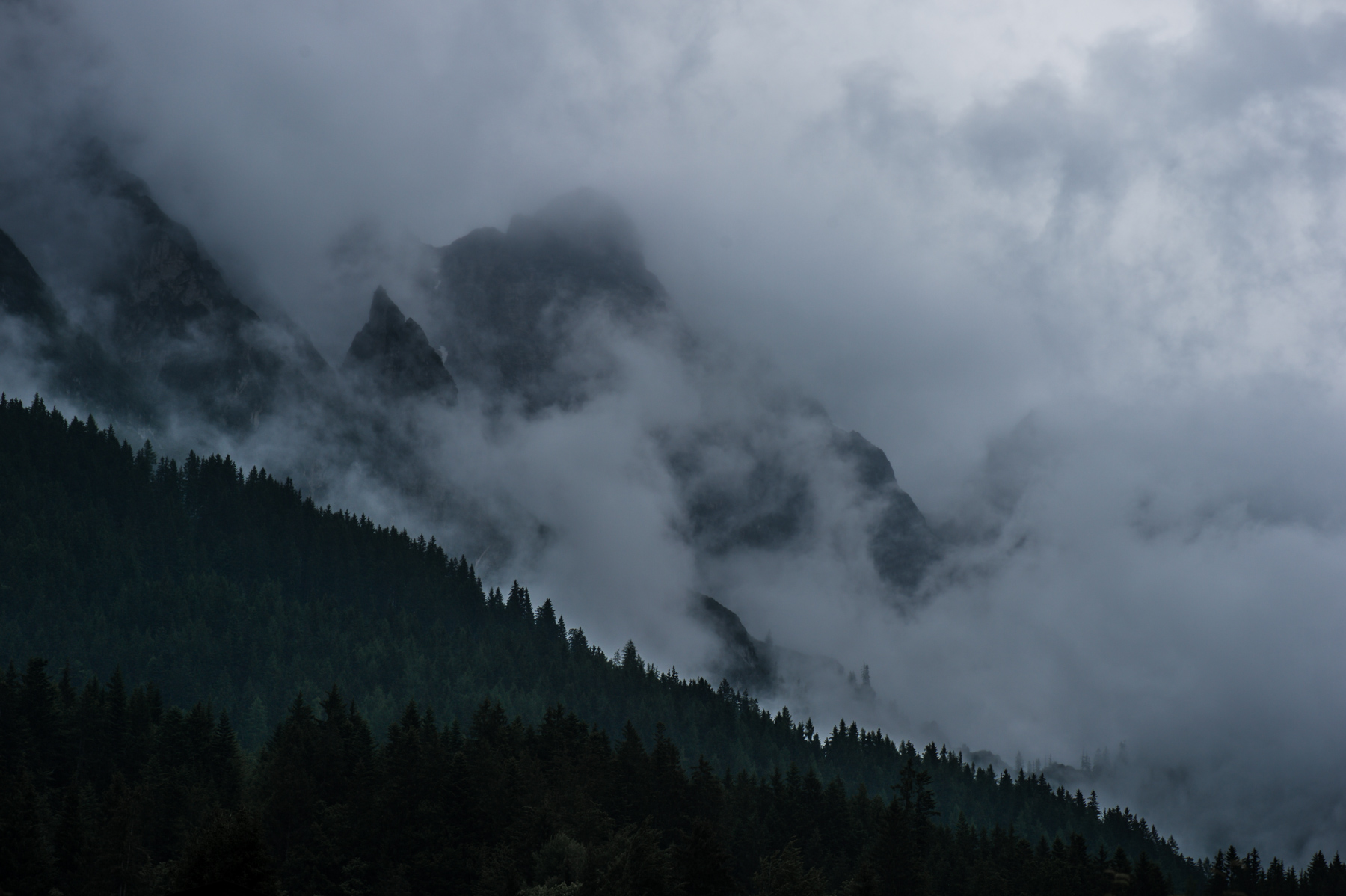 Our climbs were limited to a few short tears and transfers, so our feedback is especially limited as we mostly did chairlift runs. The first impressions have however revealed very good initial sensitivity which in turn meant that while pedaling uphill it was definitely preferable to use the Medium or Firm position(particularly on the rear) to better stabilize the suspension. The riding position is well balanced, central it is easy to load your weight onto the front end, for the steep and technical climbs.

The Dune’s downhill riding position encourages confidence and is refreshingly predictable. The bike felt intuitive and put us at ease. From our first moments in the saddle, we really felt “in it”. The Forward Geometry concept and the general geometry of the Dune Carbon are both aggressive, and effective in providing stability. Especially on on rough terrain. The short stem and well thought out angles help you change directions faster than expected. Great standover and low center of gravity make the Dune Carbon very agile. We used our Dune Carbon with a head angle set at 65 ° by the Mondraker mechanics, since the bike was mostly ridden in a bike park.

The rigidity of the chassis is perceptibly increased compared to the aluminum version, which suffered mainly out back in the rear triangle. All in all the Dune Carbon seemed to have the right amount of stiffness and sturdiness all around in the frame. In regards to the suspension, although we did not bottom out, it is easily seen that the compression curve is derived more from that of the Summum Carbon than from the Foxy Carbon but it does draw inspiration from both. The abundant initial sensitivity keeps the bike glued to the ground and a good progression in the final part of the stroke serves as protection from bottoming out. This indicates the suspension of the Dune Carbon will be a very effective descender, with excellent stability at the expense of a little reactivity on the climbs. We really did enjoy what little time we spent aboard the Foxy Carbon. In conclusion, it was through and through a very DH oriented Enduro race bike – put it this way, you wouldn’t be buying it for the climbs. 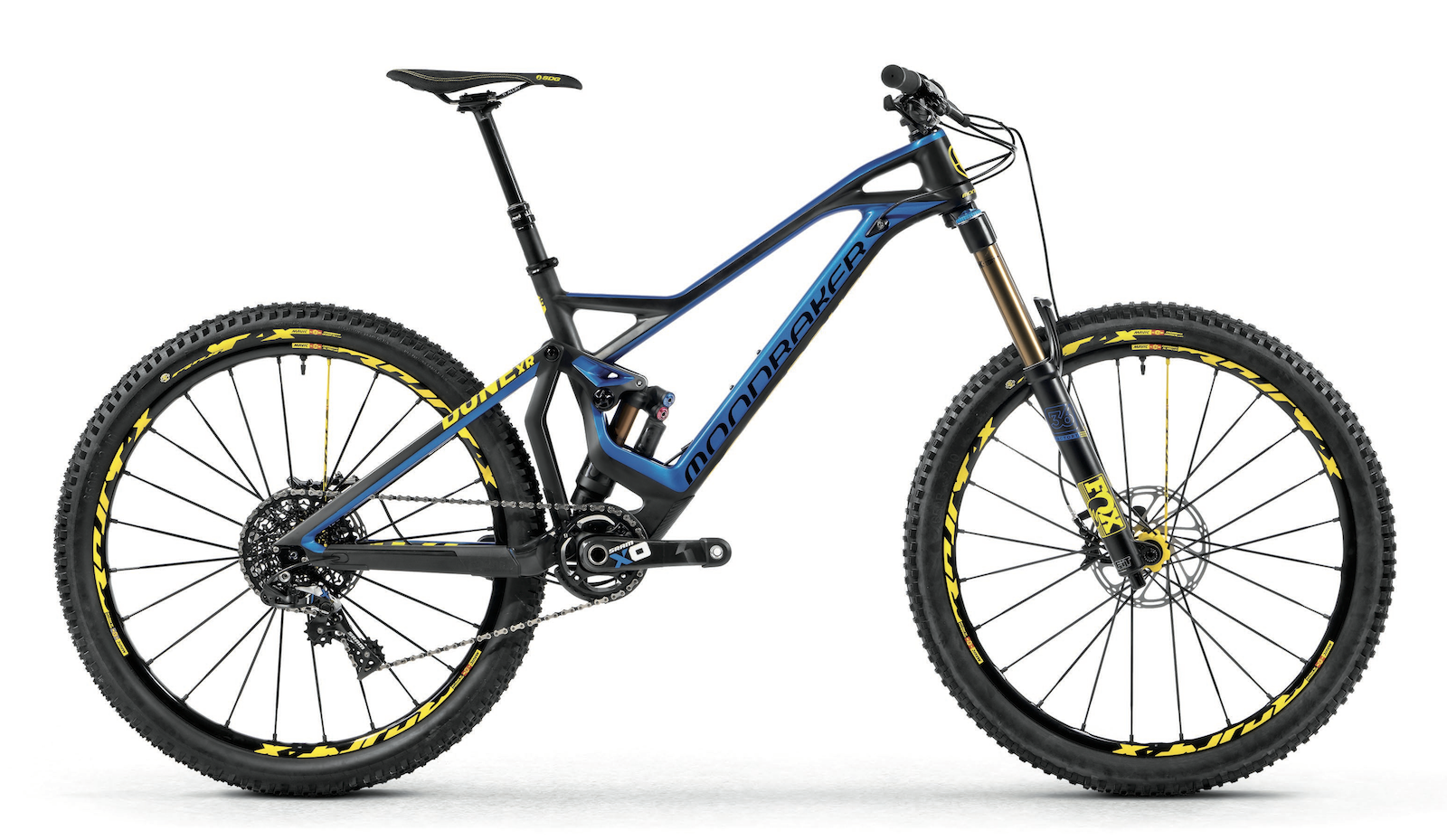 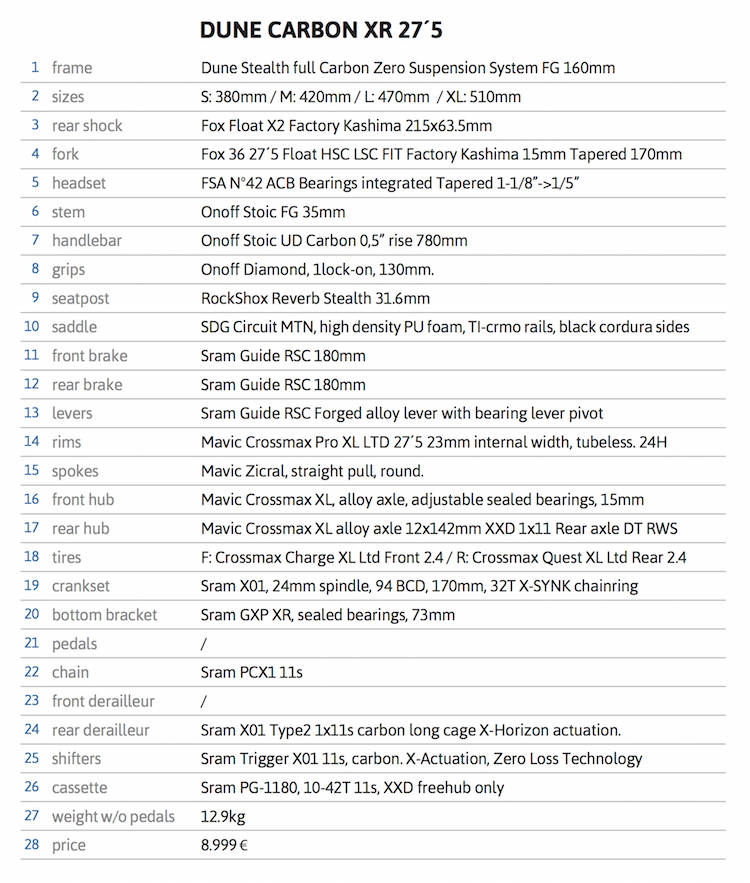 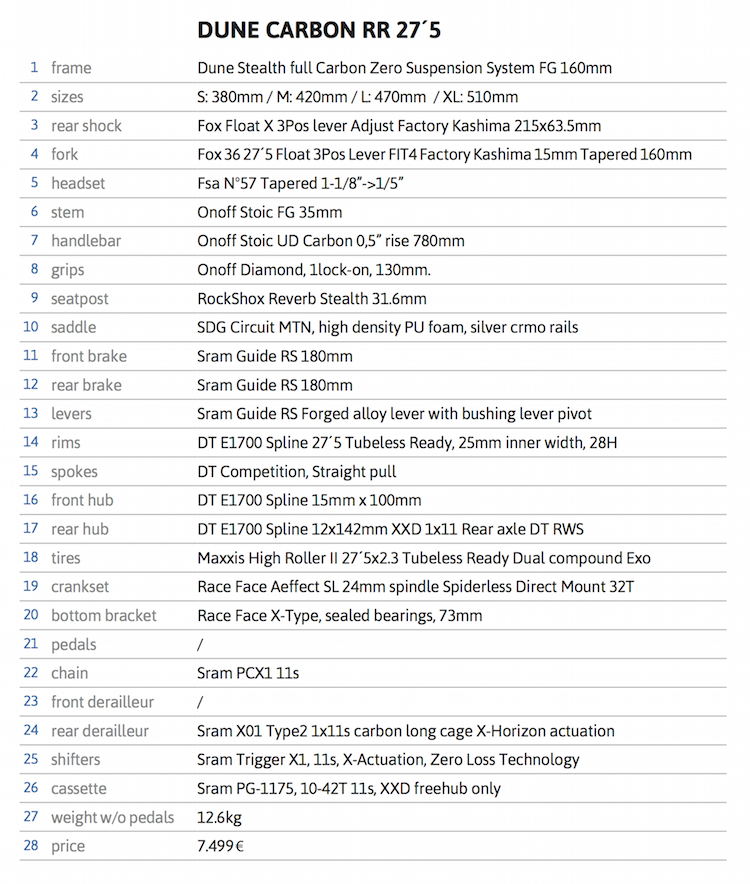 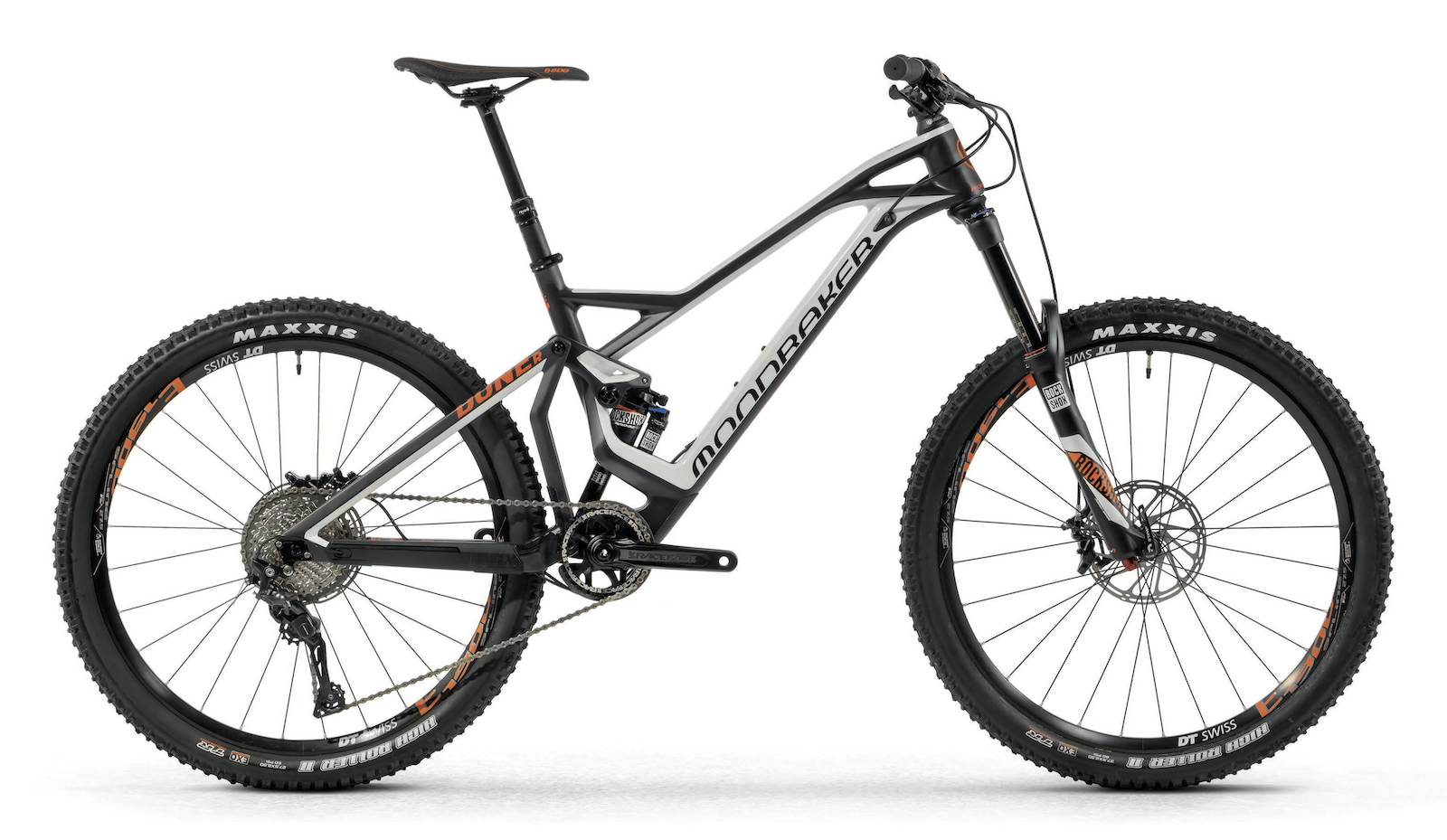 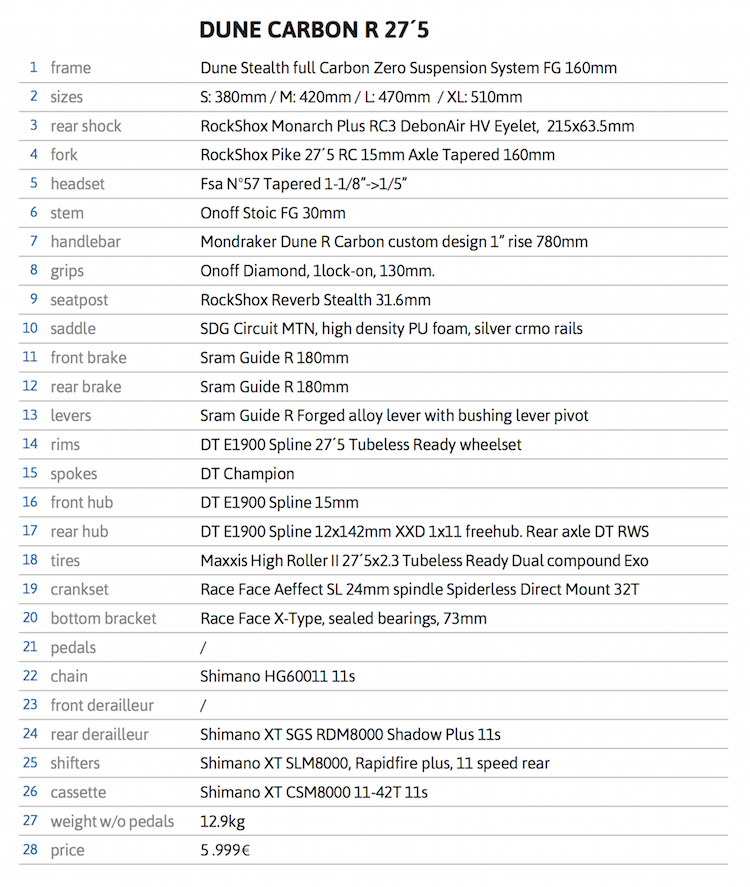