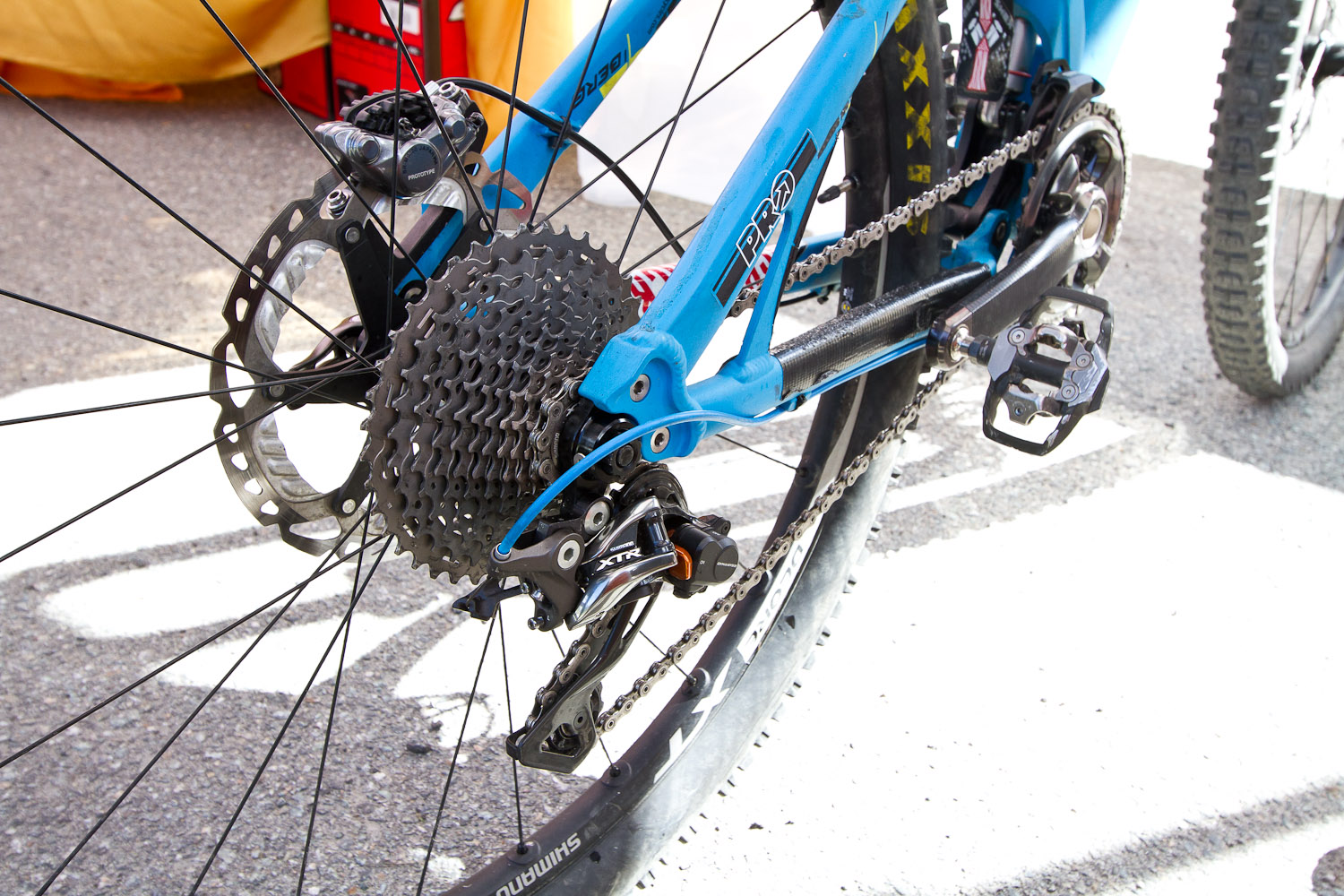 Whilst wandering around recently at the Enduro World Series in La Thuile, Northern Italy, the new XTR from Shimano was spotted on Marco Fidagalo’s Berg Enduro bike. For those who have been following the 1 x 11 gear development from Shimano, this is a much anticipated product debut for Shimano, as they finally let loose on to the market their take on the single speed drive chain segment (however in Shimano’s case it’s also possible to run it as a 2 x 11 system). Currently there is no actual product in stores, with an expected availability later in the year, it is hard to find anyone actually using it so we took the opportunity to have a closer look.

Video – A Quick Ride on Shimano’s New XTR, plus a bit of Di2 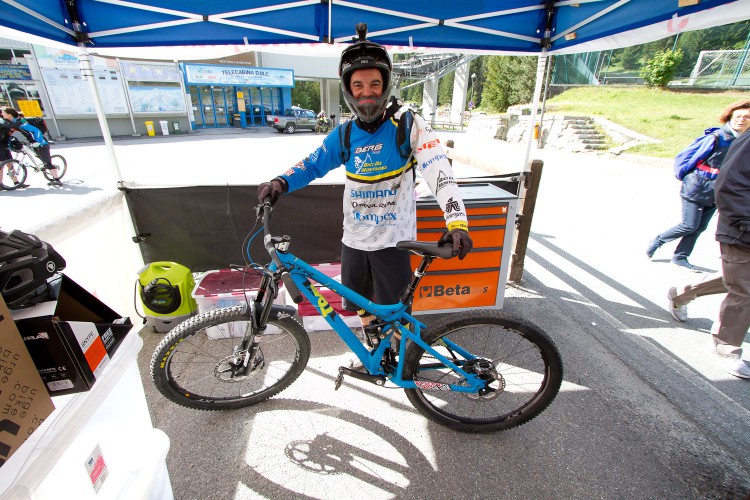 Marco Fidalgo was reserved in letting us see his bike, which was dressed in shiny new 2015 XTR components.

Marco Fidalgo is one of the lucky professional riders with the system already mounted on his Enduro bike and he allowed us a bit of a test ride to see how it performed, with this brief time we were able to form a few brief opinions of the system. He also had the new XTR brakes with carbon brake levers and newer master cylinder design, which according to his estimates gave him even more stopping power than last years versions. 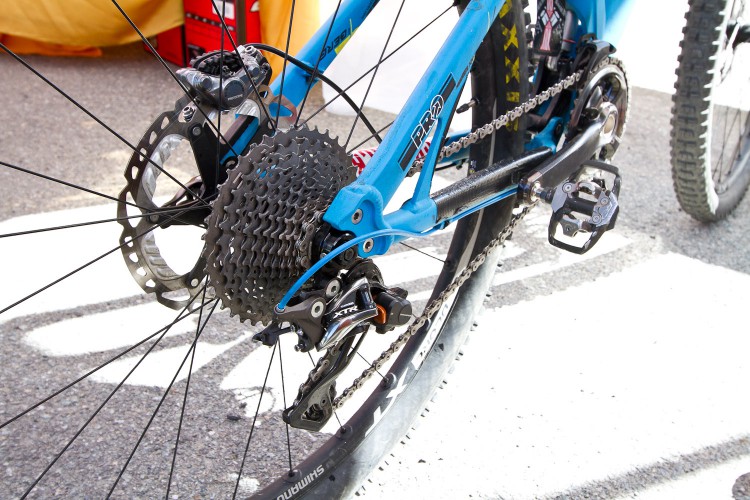 XTR derailleur with a new look and geometry plus a carbon cassette spider and 40-11 tooth cassette giving light weight and smooth gear changes for a 1 x 11 system and in Shimano’s case also a 2 x 11 system. 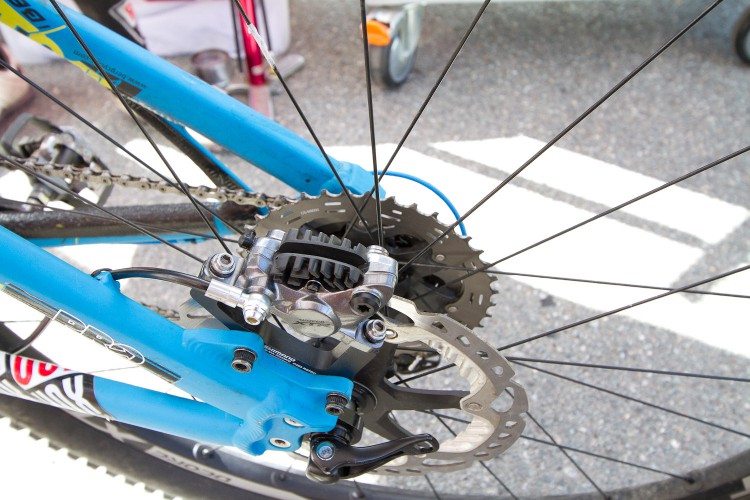 The overall design of the system including the brake callipers, seems to have a focus on smooth lines and a highly polished look, that oozes quality that signifies Shimano’s top of the range component system. From the back view you can see the carbon cassette spider that enables Shimano to keep the weight of the system as low as possible. 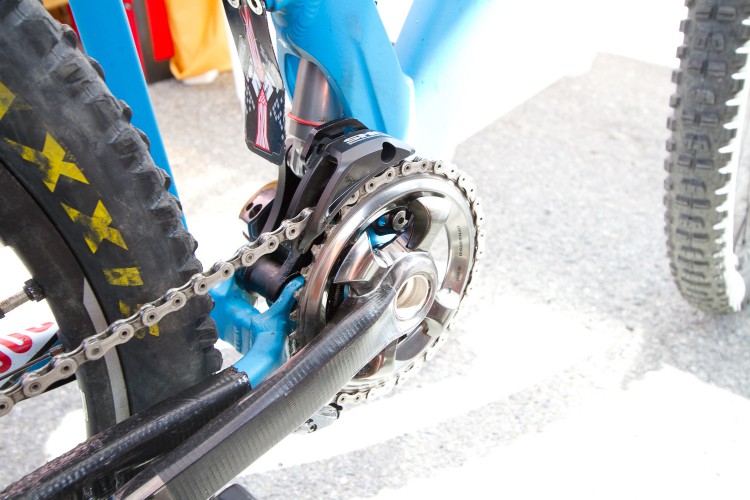 The front chainset felt stiff, and very smooth, with a silent operation of the chain guide.

XTR is Shimano’s top of the line MTB component system, it has a variety of versions, all for slightly different uses, from Cross Country to Enduro. In 2015 it appears Shimano has made a significant step forward, and moved slightly into the territory of it’s competitors with a wider range cassette and an extra gear. 11-40 teeth is now one of the standards possible on XTR, with such a large range how was the shifting? Well we did not absolutely have an extensive test but with it but with what we did try we were very impressed. It felt very smooth compared to last years version with a distinctive clarity in the transfer of power from the pedals, despite we weren’t even clipped in.

We were more interested in how the chain shifts up and down the cassette under load, and we were impressed. Smooth movements even under power, with the speed of change being very quick. In our short test runs around the mountain we understood that the performance of operation of the latest XTR components has just got better. With longer term testing it would be interesting to see how the wear characteristics are, but according to Marco he has not found any problems so far, including when used in very muddy conditions.

The setup we tried was with a single ring up front, with a 36 – 40 T ratio on the bike, it was certainly suitable for it’s intended use here in La Thuile, which was an Enduro environment. With the 2 X front rings, the range increases further, which will be especially interesting for those riders with very long grinding climbs. The main feeling/feedback we had through the pedals was firstly that the crankset felt stiff and smooth during rotation, it should be noted that Marco had a Shimano chain guide fitted, it made no noise and we couldn’t perceptibly feel it in the system.

Looking at the cassette closely it’s possible to see how Shimano have kept the weight down with the large sprockets using carbon spiders. The chain line looked and felt fine with no feeling of excessive friction or chain cross over with the 11 speed cassette. In theory the chain is narrower marginally and the cassette is the same width as a 10 speed cassette, so it will be interesting to see how wear takes place in the long term, however talking to Shimano Europe it was clear that the new system has been optimised for all of these aspects and they say wear wont be the main issue, especially when used with their new Di2 electronic shifting version.

The brakes which we got to try had prototype written on them, so we cant make any secure conclusions about if these are the versions that will go to market in this form. The finish on the brakes looks good and with carbon handles the weight is really low and also the feel on the lever is very good. Apparently the master cylinders have been redesigned compared to last year, so produce a more consistent feeling. What we can say is that the modulation and stopping power was excellent, with no fade. If we don’t have to think about braking because brakes work so well, we know we have actually  got some serious brakes mounted, a good brake is one that you don’t think about, you just use, from our testing it feels like that the XTR brakes we tried fit this way of thinking.

Shimano had a little demo of their new Di2 MTB shifting system in front of the Shimano truck at the EWS in La Thuile. Although we didn’t get the chance to try this on the trail, we tried to be as harsh as we could to the system on the rollers, grinding and changing at all the wrong moments, the system coped beautifully. In fact we were surprised how well it performed. The demo system was set up as a 2 x 11 system and was programmed to use the whole range of gears, so as you went up or down the rear cassette, the front rings were automatically selected, increasing the gear ratio range and also according to the Shimano representative prolonging the wear of the entire drive train system, as the chain is never over worked in extreme gears where the chain line might be at it’s extremities. Plus with a ratio from 11- 40T matched with a 28-36T on the front, there is a greater smoothness in the transition between gears without large steps, which is Shimano’s philosophy, to have as smaller steps as possible between gears.

Our tests as we said are first tests that seem to show Shimano has put together a new XTR portfolio of components that definitely give a feeling of improvement over last years range. The new cassette and shifting system plus the possibility of electronic shifting are impressive. Due to the flexible nature of the drive train builds that are possible, it seems the new XTR will probably satisfy a huge portion of potential riders from different riding backgrounds that are looking for the lightest and smoothest performance from their drive train. 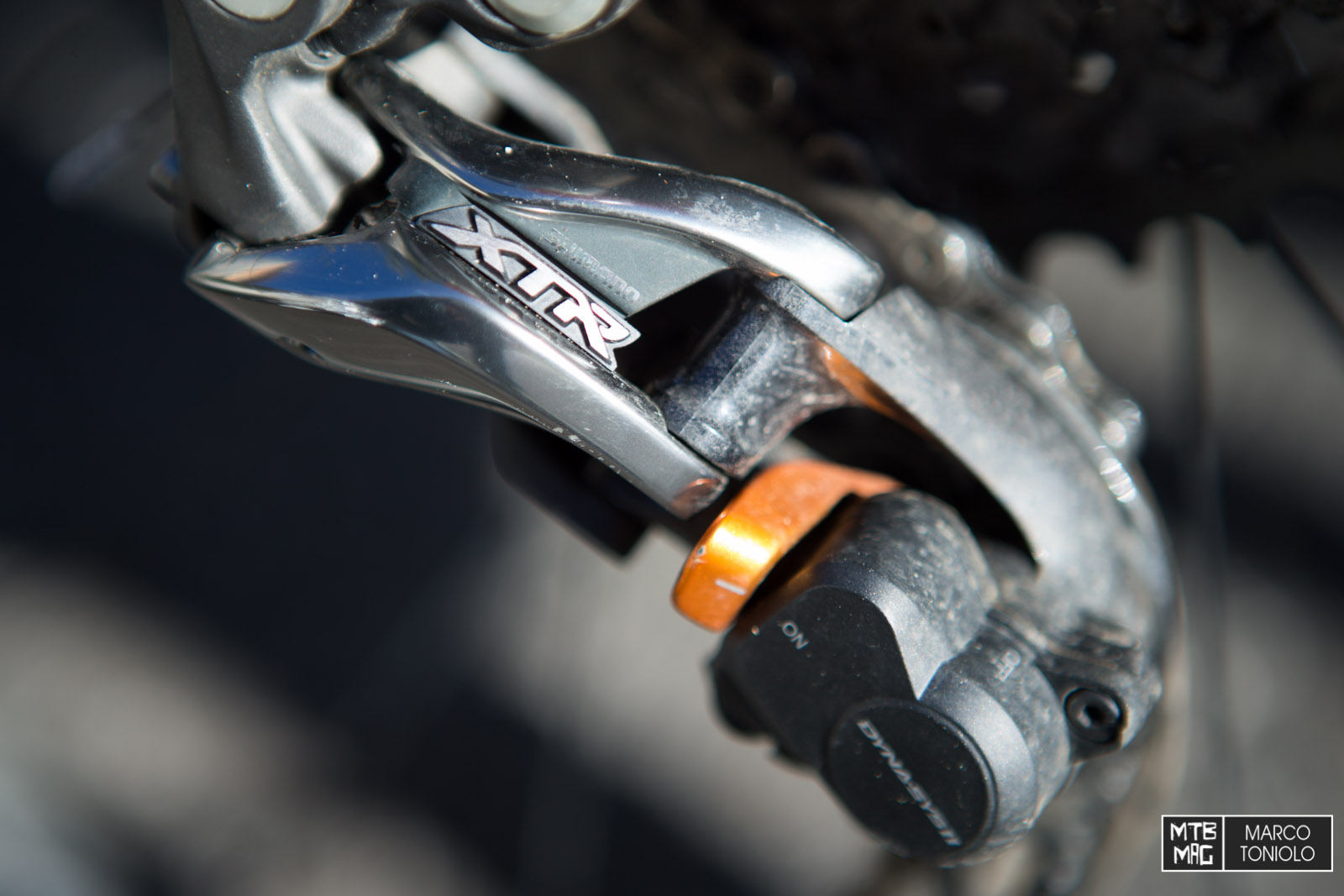 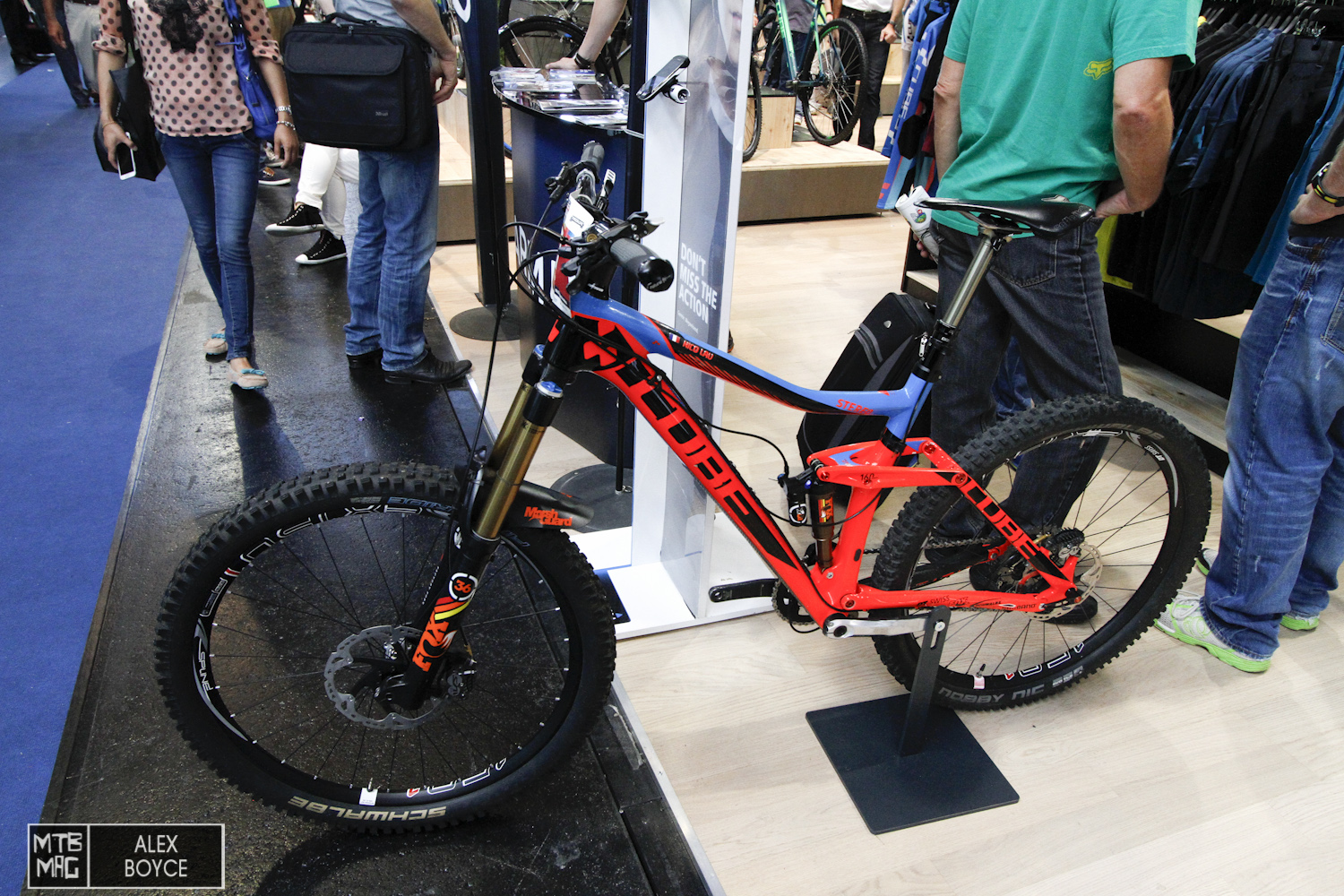