Last year, when Shimano announced the new XTR groupset the internets went bezerk. Especially over the 1×11 option, with its 11-40T cassette being the centre of the discussion. Will the range be enough for a “normal” rider? Will it be better than SRAM’s XX1? In this first article about the new XTR we try to answer these questions. As you can see from the photo, Shimano sent us not only the drivetrain, but also the new XTR brakes and Trail wheels. However, the crankset is not Shimano, because the 1×11 is not yet available. The Japanese brand told us they started the 2×11 and 3×11 production, because those are the specs most of their customers are asking for. 1×11 will follow at the end. If you go to Shimano’s XTR page and search for the 1×11 cranks, you will find a white Jpeg. So, Shimano gave us a 2×11 but, knowing that the hot topic is the 1×11, we kept the Race Face Next SL crankset on our Santacruz 5010 test bike, disassembled the SRAM XX1 and put on the brand new Shimano XTR. What better way to compare the two brands a bit early. We thought of taking off the small 2×11 chainring, but the teeth of the 2×11 are “normal” ones, not engineered to keep the chain at its place. 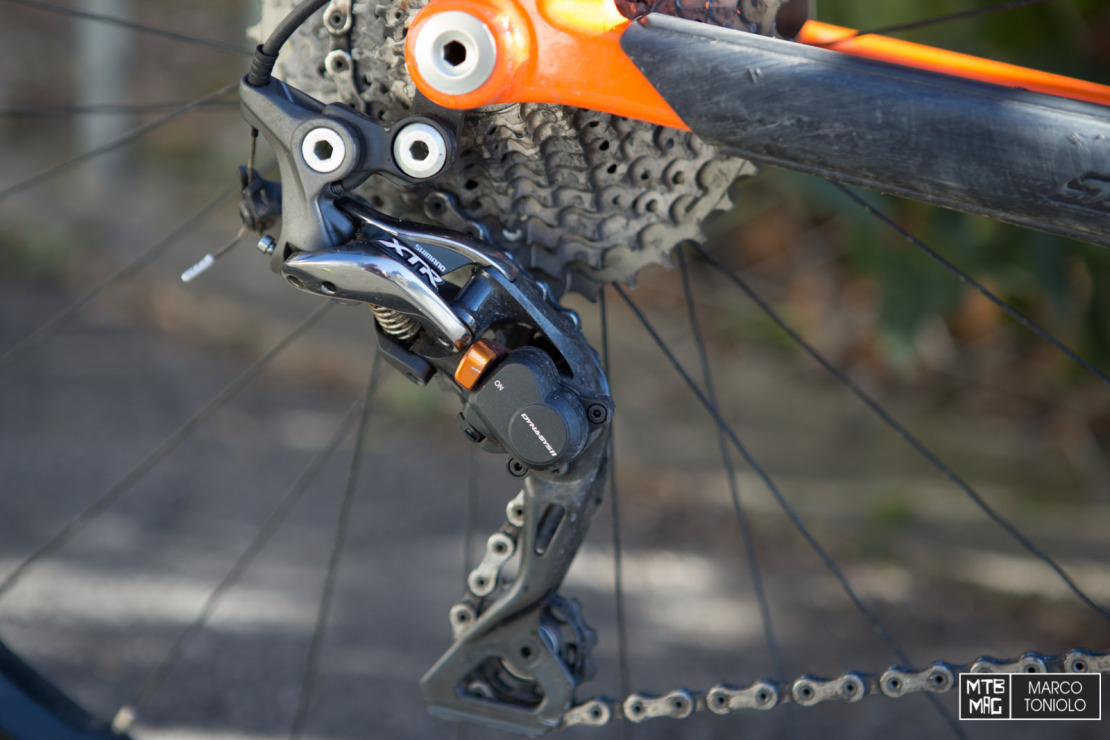 We tested four components of the new groupset: the rear derailleur, the cassette, the chain and the rear shifter, all 11 speed specific.
The Shadow +rear derailleur is designed to be as close as possible to the frame in order to prevent impacts. It lies at a new angle, while the stabilizer lever/system remain the same. You can recognize it from its orange color and its ON-OFF position. Off should be used for tuning the shifting while working on the bike or to make it easier to remove and install the wheel. It weighed in at 220 grams. 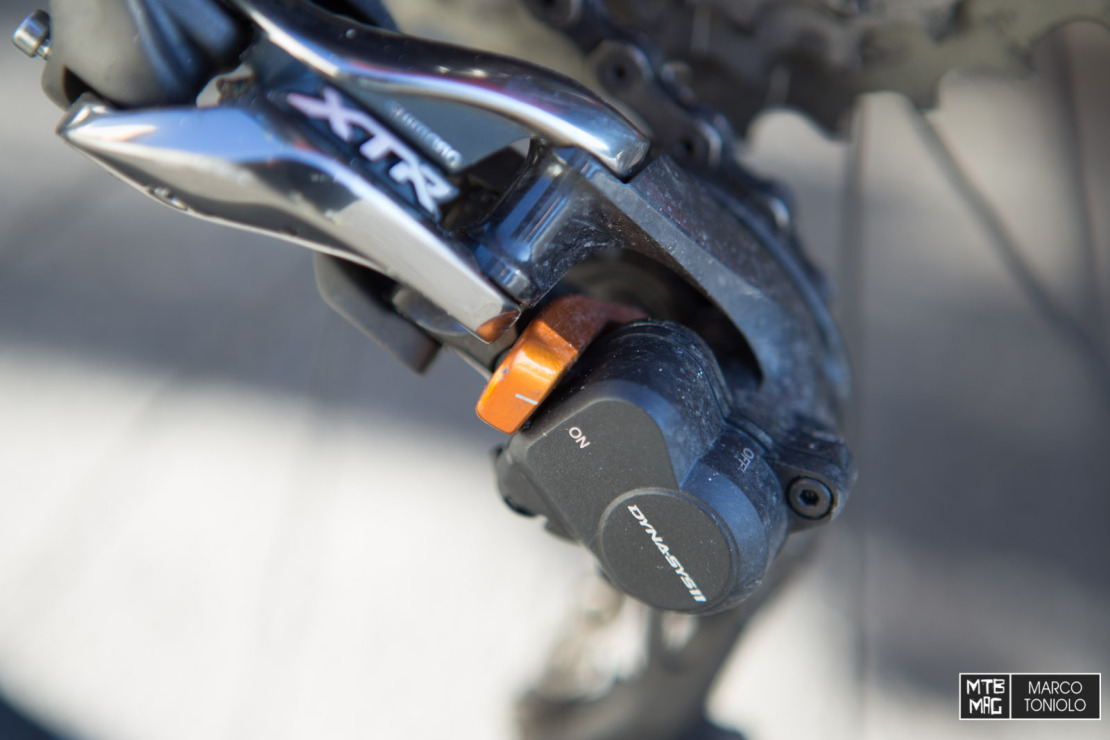 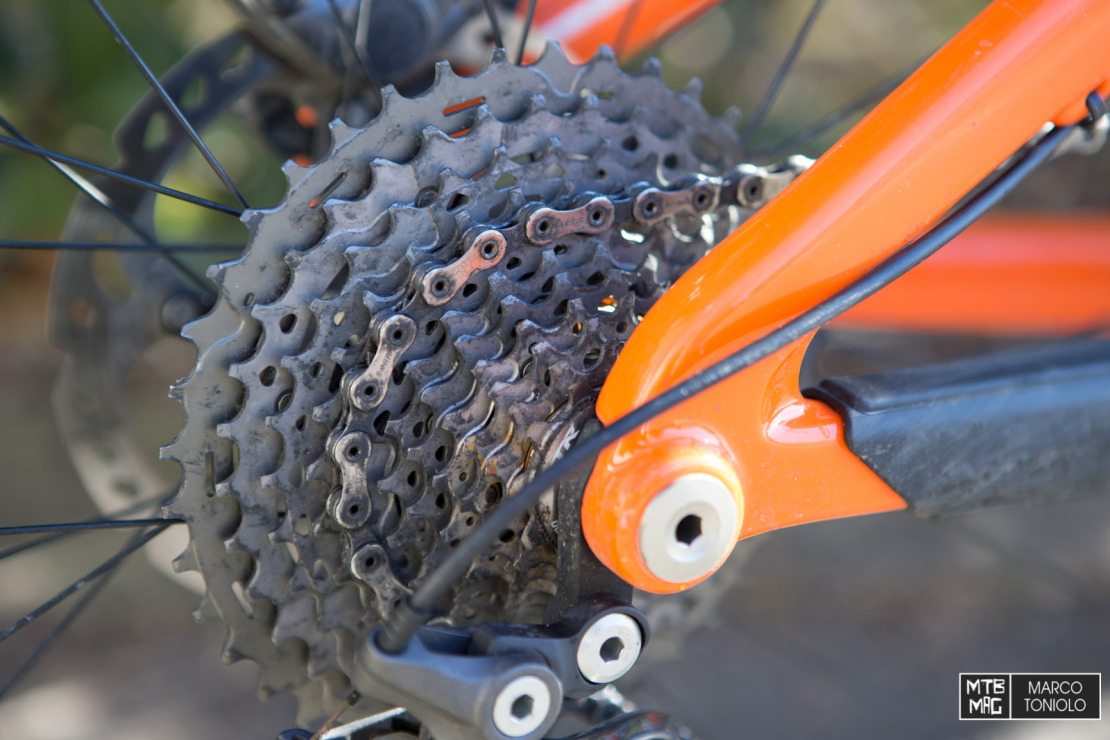 The shifter has two carbon levers with different textures and they should require 20% less shifting effort. The lever to shift down has a two way release, while the other one can only be pushed. 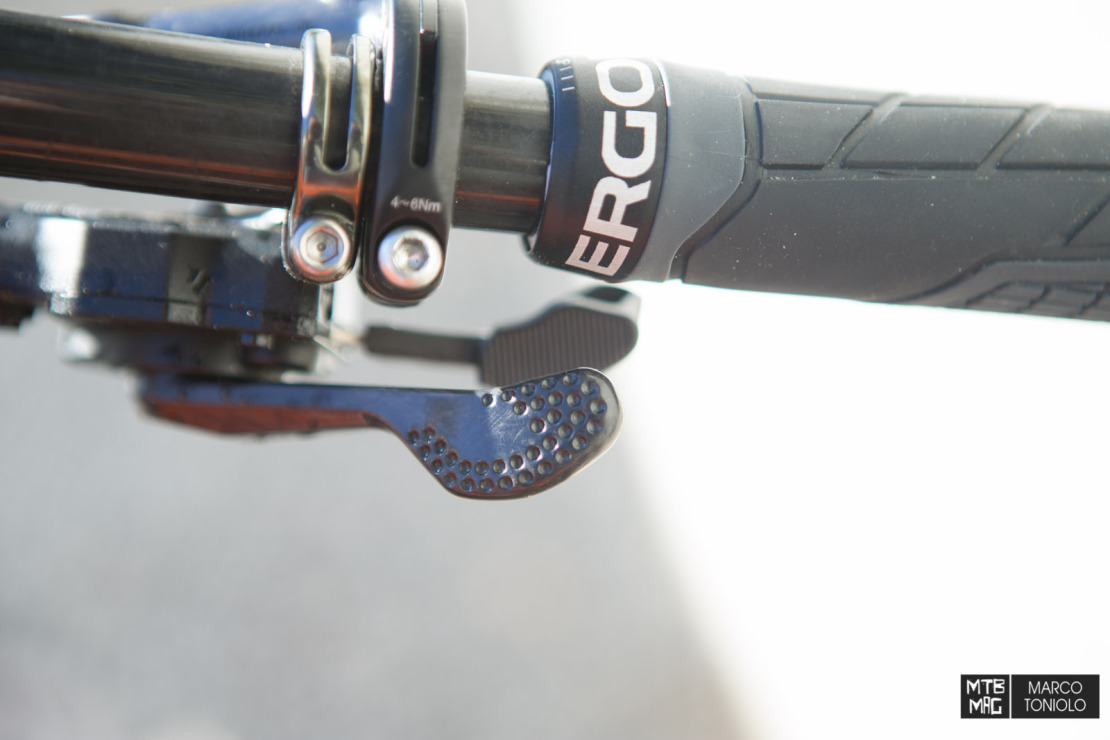 We rode the new XTR groupset during the past two months, in many different weather conditions. The testing has not ended yet, this is only the first article of a series.

Shimano sees 1×11 as a racing specific product. For all other usage, Shimano has the 2×11, both mechanical and electronic. That said, we know that lots of enduro riders are using the Shimano 1x1o drivetrains, and that’s the reason why our first review focuses on the 1×11. Logically the gear range is pretty short, especially on the 11t side: when we had to pedal downhill, the 11t, combined with a fairly uphill oriented chainring (32t) is not enough to keep up at high speed. On the opposite side the 4ot allowed us to climb all the steep grades of our usual trails. Maybe we could have dared to use a 34t chainring, but that would have been quite tough on long alpine climbs.

We liked the materials that Shimano chose for the cassette: despite the rough winter trail conditions, it looks like new. 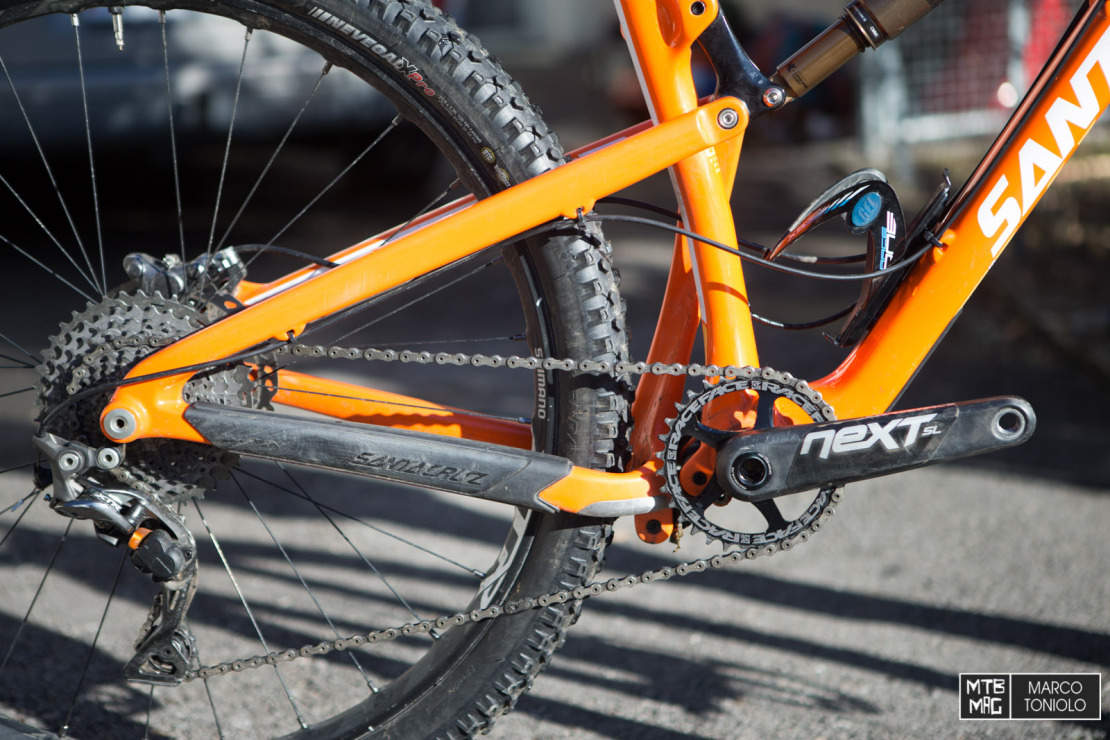 If you have been using a Shadow + rear derailleur, you already know how well it keeps the chain in tension. During entire duration of testing the chain never fell, surely assisted by the big Race Face Next SL teeth. On the other hand, the shifting action becomes harder when the lever on the rear derailleur is on the ON position, in both shifting directions. Disabling the chain tensioning system is not an option, because the chain will slap the frame and fall easily. Still, the shifting is precise and fast even in muddy conditions.

The shifter is very ergonomic and we love the two way release when shifting down, especially on technical downhills where you want to keep all your fingers on the bar. 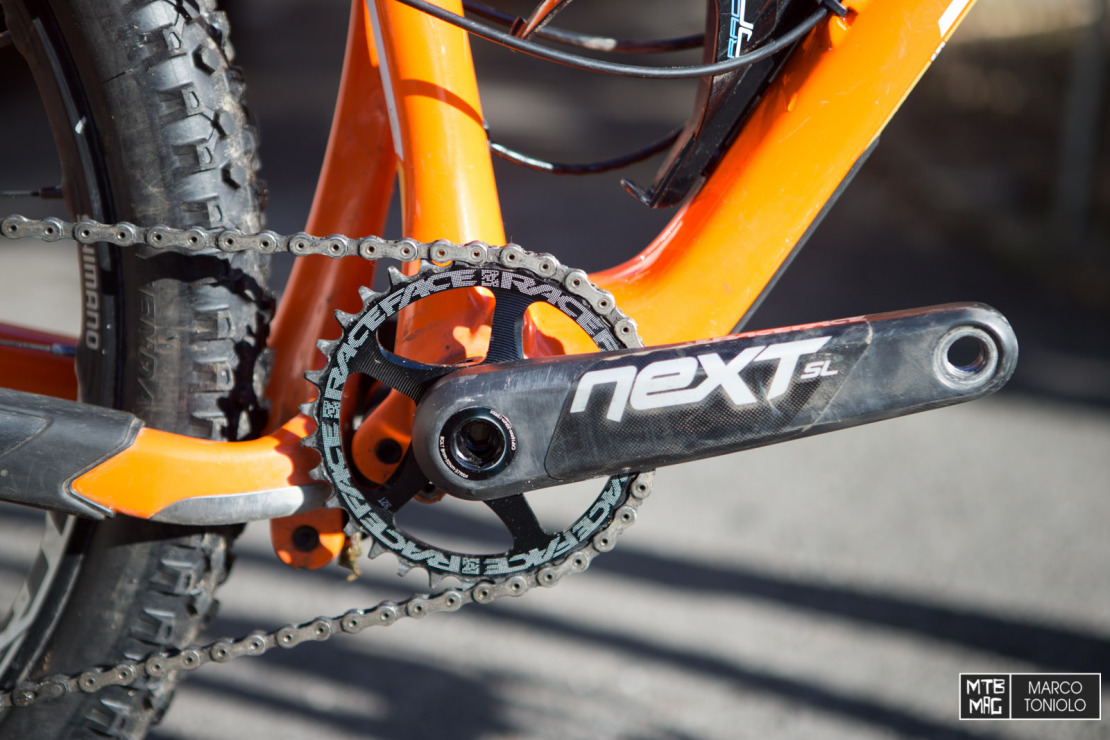 We can’t praise the Shadow + rear derailleur enough in regards to its well protected position on the bike. Very seldom have one of our rear derailleurs looked so good after a two month test period. As you can see from the photo below, it had very few impacts. Especially considering that the testing has been held on mostly rocky trails in alpine regions. A good result, particularly if you have your wallet in mind. 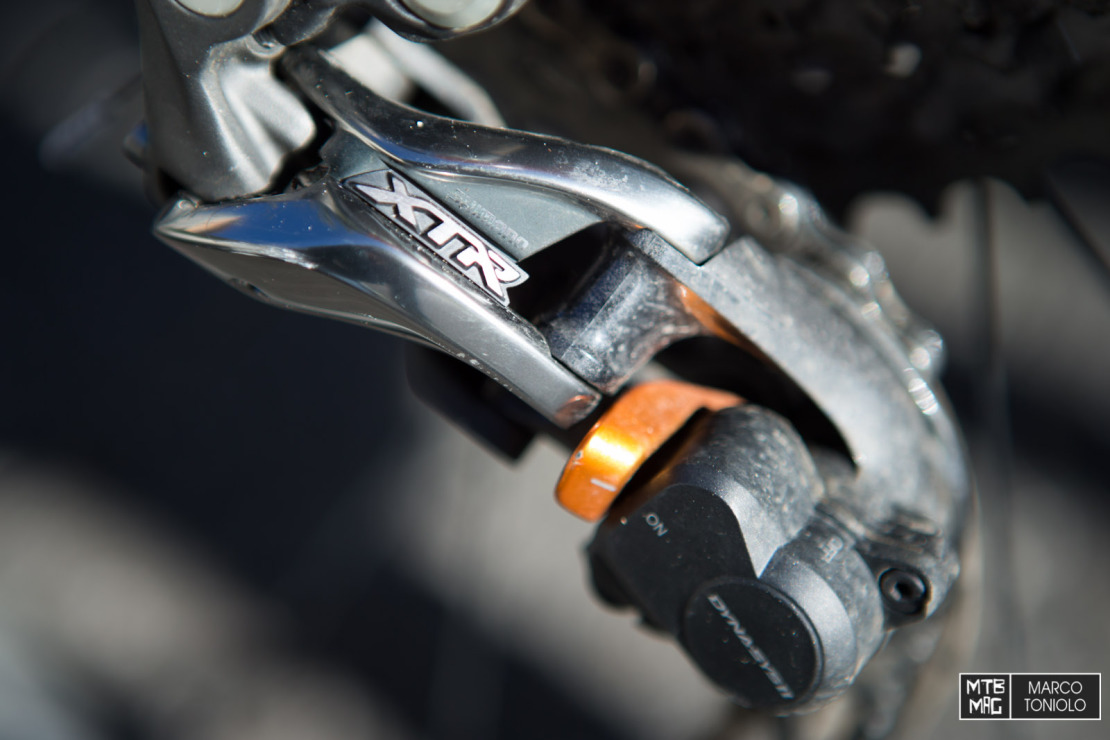 At a first glance it looks easy to answer this question: the XX1 groupset has been engineered to be a native single ring system, and has a wider gear range, both on the chainring side (28-38 compared to the 30-36 of Shimano) and on the cassette (10-42 vs. 11-40 of Shimano). If you want to have a 1×11 only, your choice will likely lean towards SRAM if you already own a XD driver body for your rear wheel. Here lies a major point where people will give the new XTR a tip of the hat for its versatility:

2) Buying the adapters and the proper chainrings, the single ring XTR becomes a 2×11 or a 3×11. Marathon racers will like this – being able to add gears when the race courses combine steep long climbs to fast flat sections.

3) The cassette is not a single piece, so you can change the worn out cogs without buying an entirely new cassette. As you can see from the photo below, the big 8 cogs are paired. 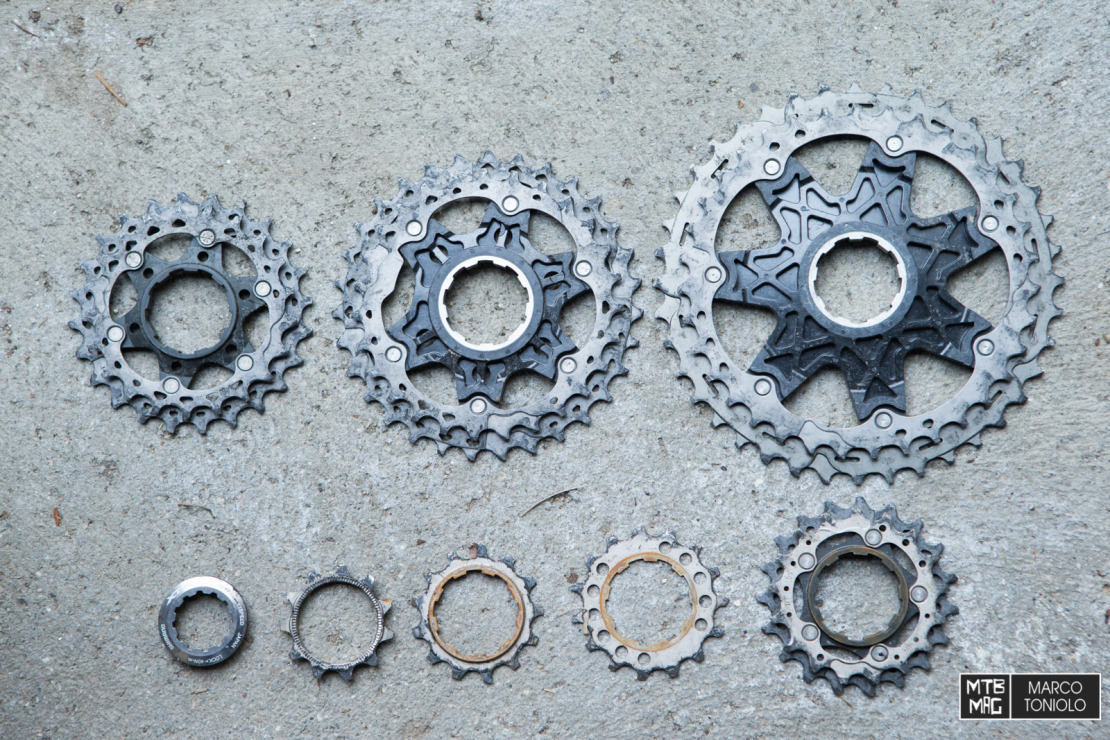 Not all the new frames are compatible with a front derailleur, especially the new enduro bikes, that means if you choose the XTR, you will have to ride it as a single ring. 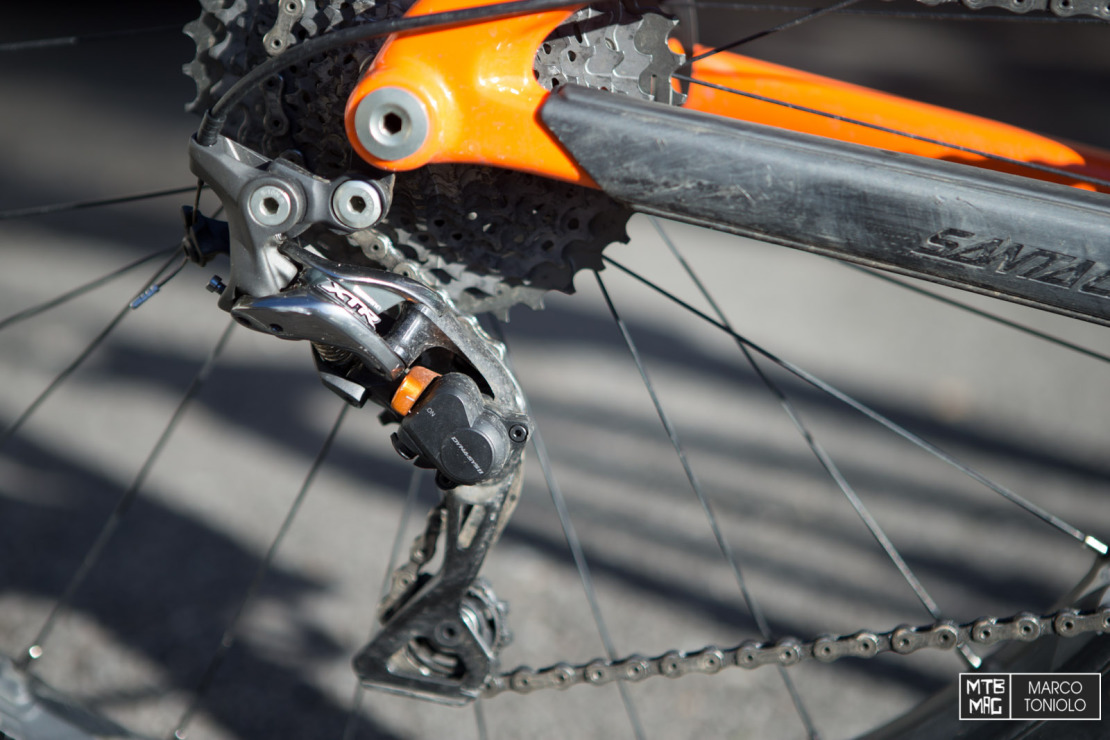 Shimano has brought to market a further evolution of its XTR groupset whose biggest advantage is its vast versatility. Despite this being the review of the 1×11 option, we have to say that the new XTR can be easily transformed in a 2×11 or 3×11, given the front derailleur compatibility of the bike frame. The rear derailleur shines for its great chain tensioning system and for its positioning on the bike, nicely sheathed from impacts. The shifting is fast and precise, but it is not very smooth when the Shadow + lever is in the ON position. The big advantage of the 11-40 cassette is its compatibility with the 10 speed driver body, but its relatively short range speaks for the aim of the 1×11 XTR: racing. Long story short: if you are not a strong rider, the XTR 1×11 is not for you.