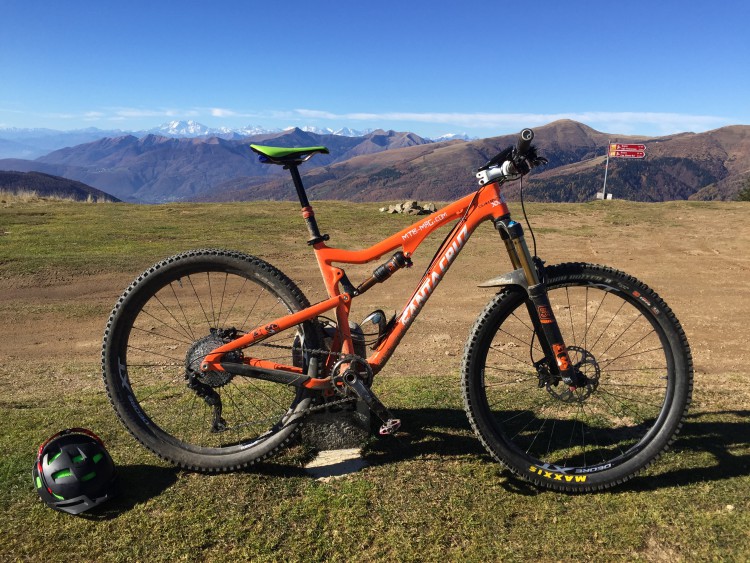 In the last two and half months we have been riding a Santacruz 5010 full Shimano XT spec’d: drivetrain, brakes and wheels are all from the 2015 new groupset. While later this week we’ll review the brakes and the wheels, for now we’ll focus on the drivetrain. 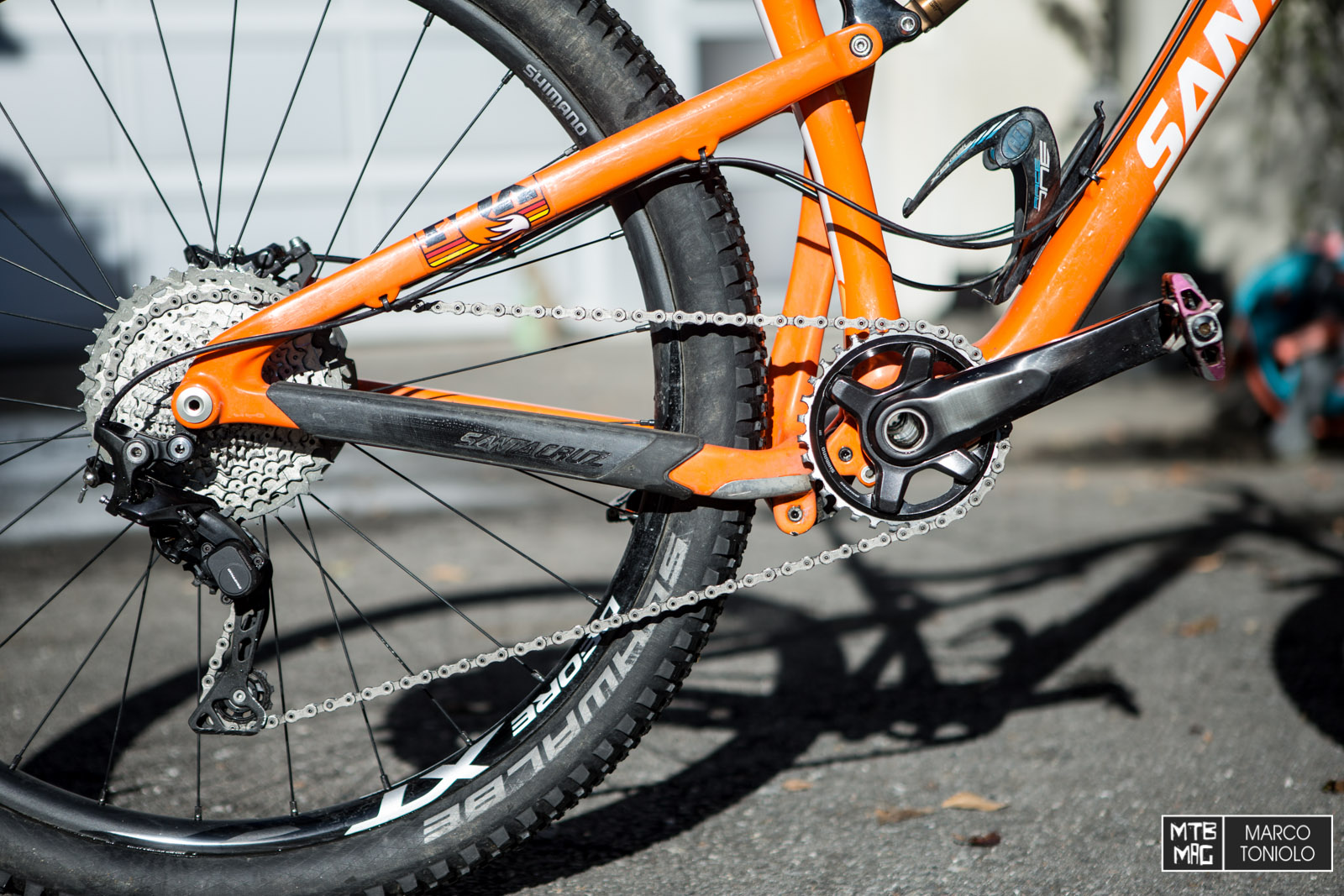 We chose the 1×11 option, because in the last three years the reviewer has been riding mostly on 1x drivetrains, so the comparison was easier to approach. 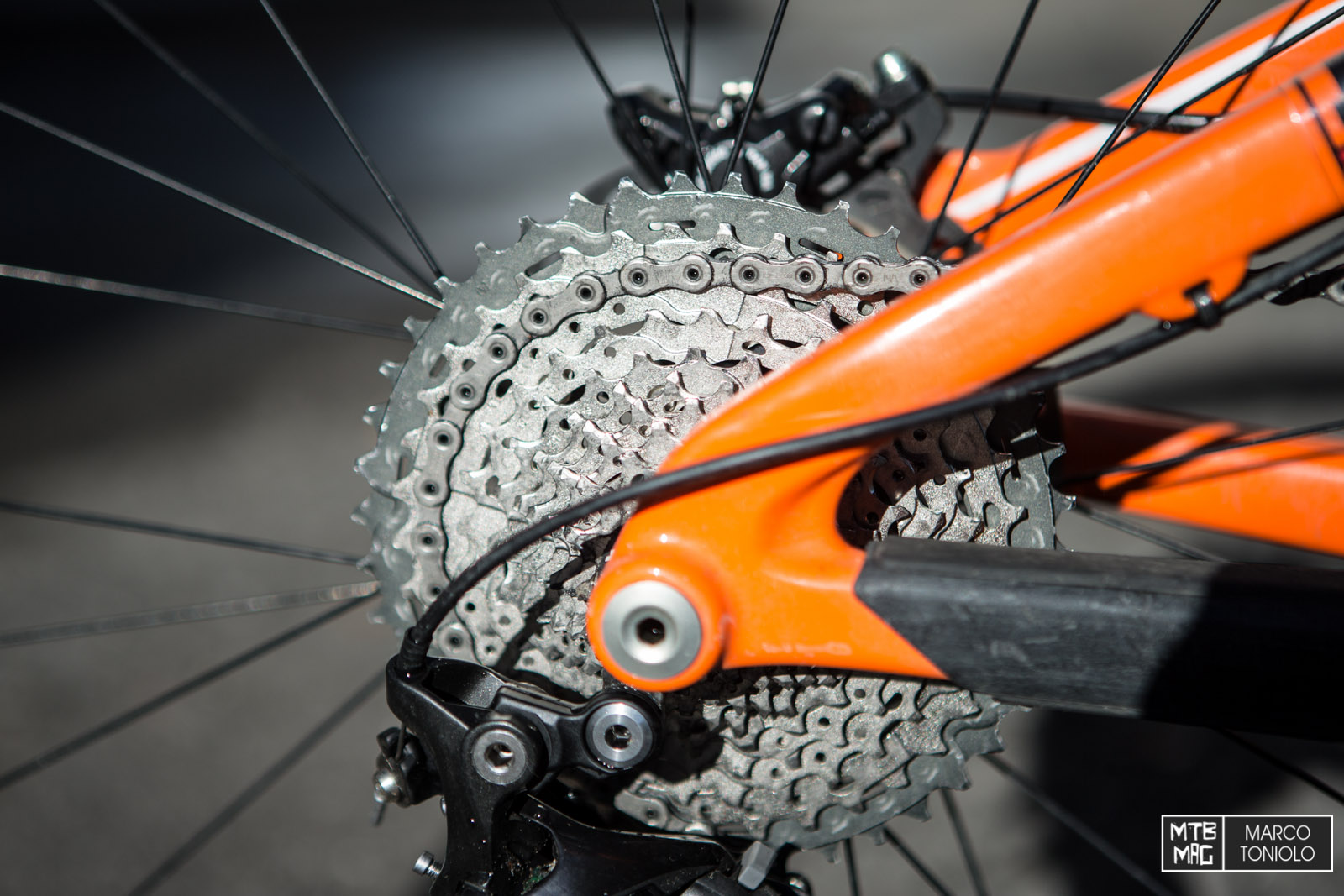 It can be mounted on a common Shimano drivetrain, because the smallest cog is a 11T. All the cogs are in steel, except the 40 and 42, aluminum. 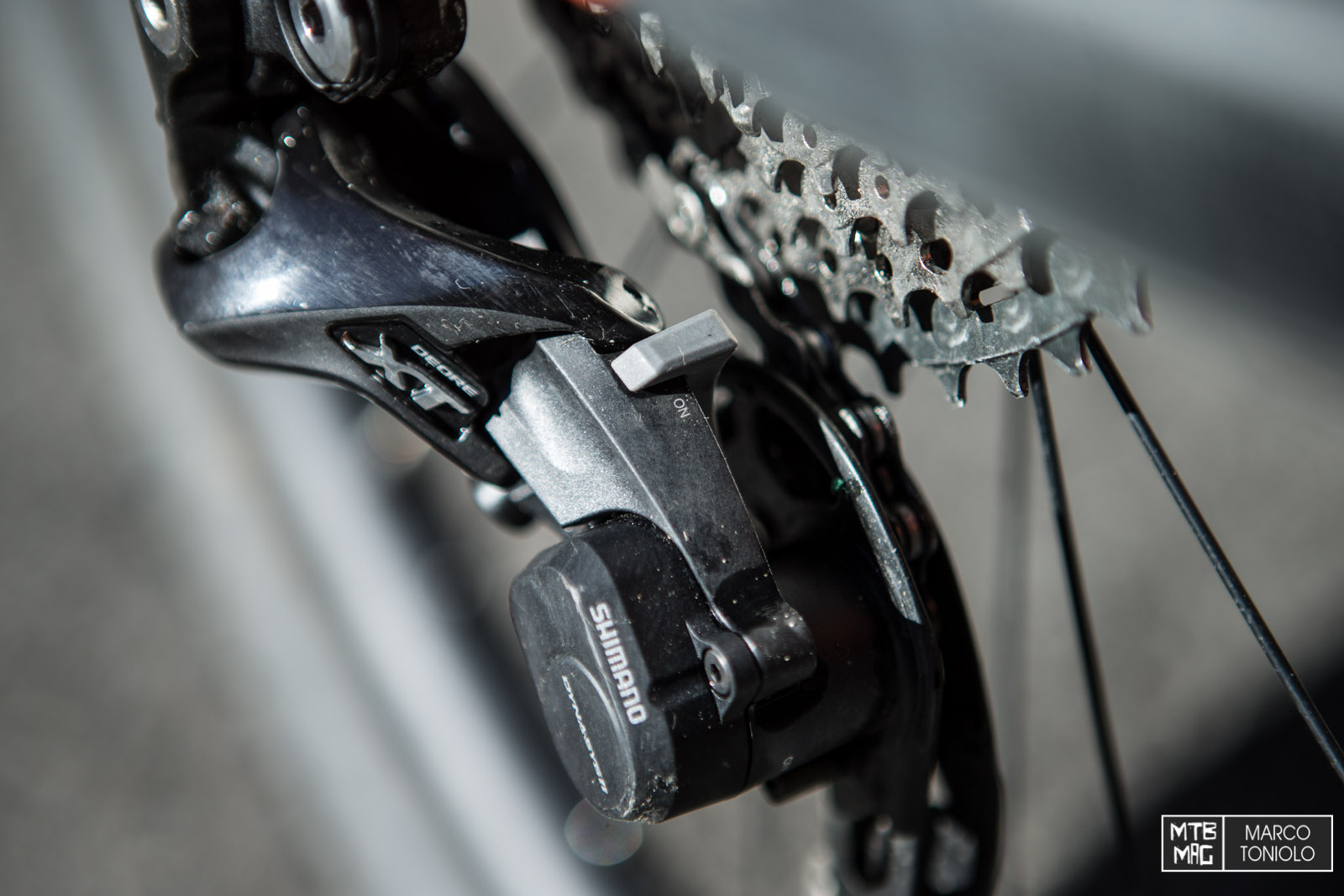 It’s a Shadow RD+, that means its shape and angle are aimed to protect it against impacts with rocks. In the photo you can clearly notice the so called “chain stabilizer”, activated by the grey lever when it’s in the ON position. 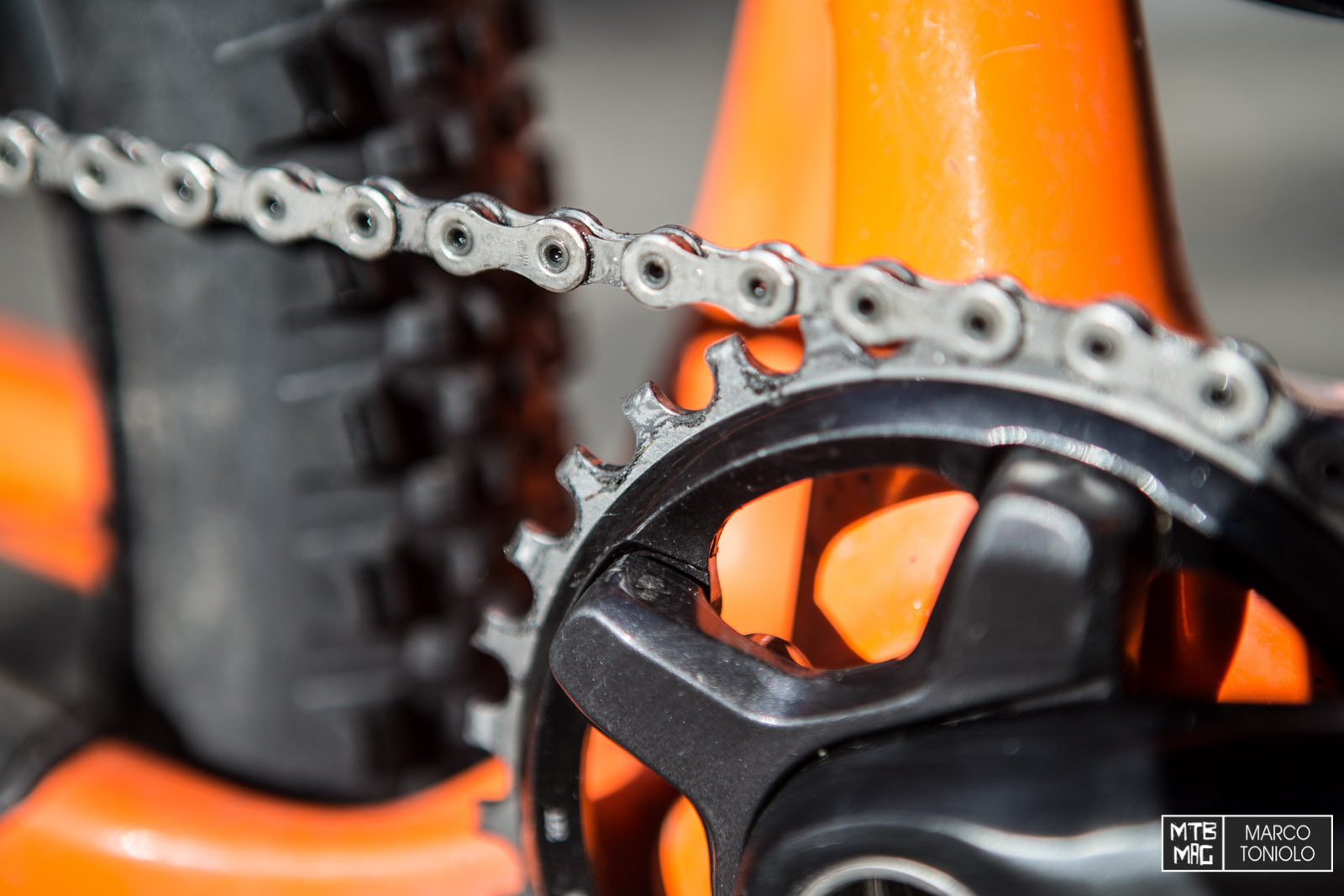 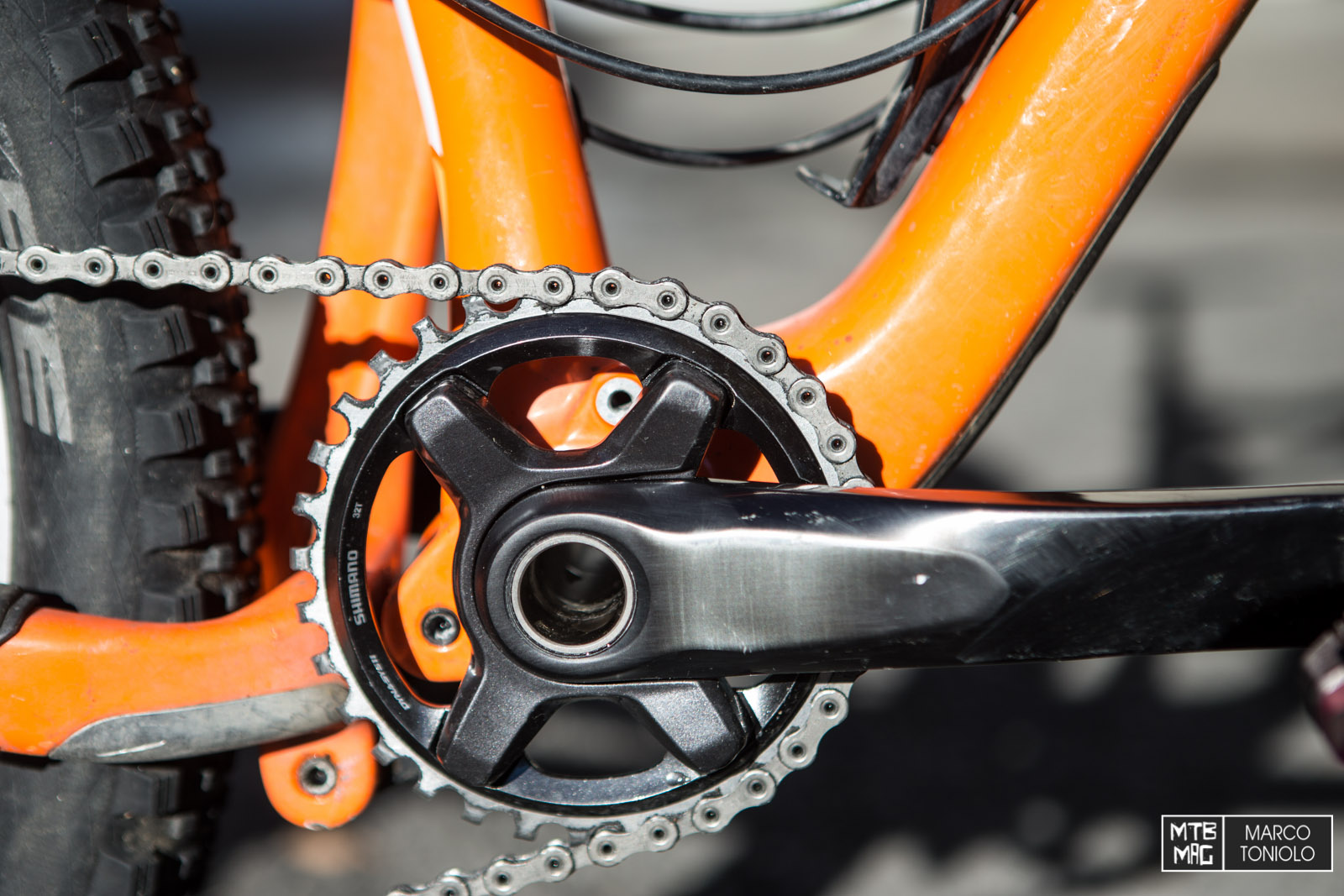 HOLLOWTECH II 1×11, alloy, the cranks are 175mm long. You can’t see the Shimano XT logo because it has been rubbed away by the shoe friction during the testing. This is how it looked originally. Well, this happened to all the Shimano cranks in the past years, including XTR, so it was no surprise.

The chainring has 32T (available in 34T and 30T also), the teeth have all the same identical shape. No narrow-wide design. The crankset and the spider can be used with a different combination of chainrings: 1×11, 2×11 and 3×11. The chainline is 50.4mm. 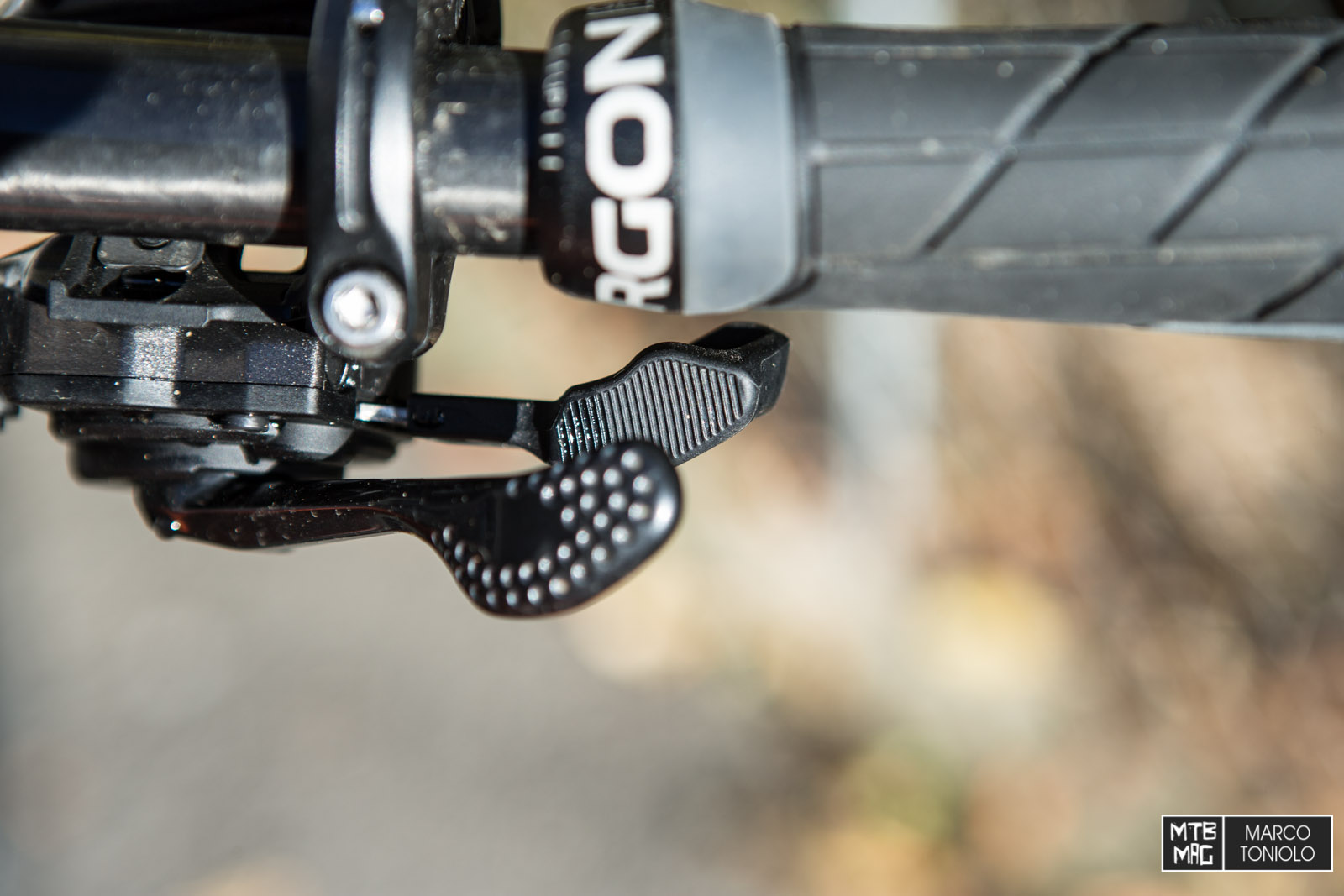 Rapidfire  Plus I-specII, 2-way release. This means that the front lever can be pressed using thumb or index. You can see the new bar clamp, thinner and easy to match to the brakes. 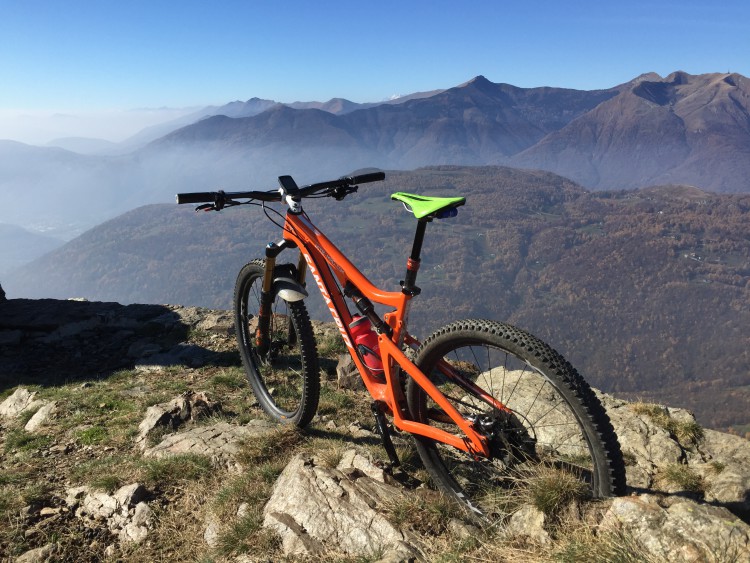 Shimano’s XT drivetrain has a history of reliability and great quality for the money due to the fact that the Japanese brand brings its XTR top technology slowly “down” to the cheaper lines like the XT and the SLX.  The systems work the same way and the differences are mostly in aesthetics and weight, i.e. the materials used. For this reason I didn’t expect a big discrepancy to the XTR drivetrain I tested some months ago. 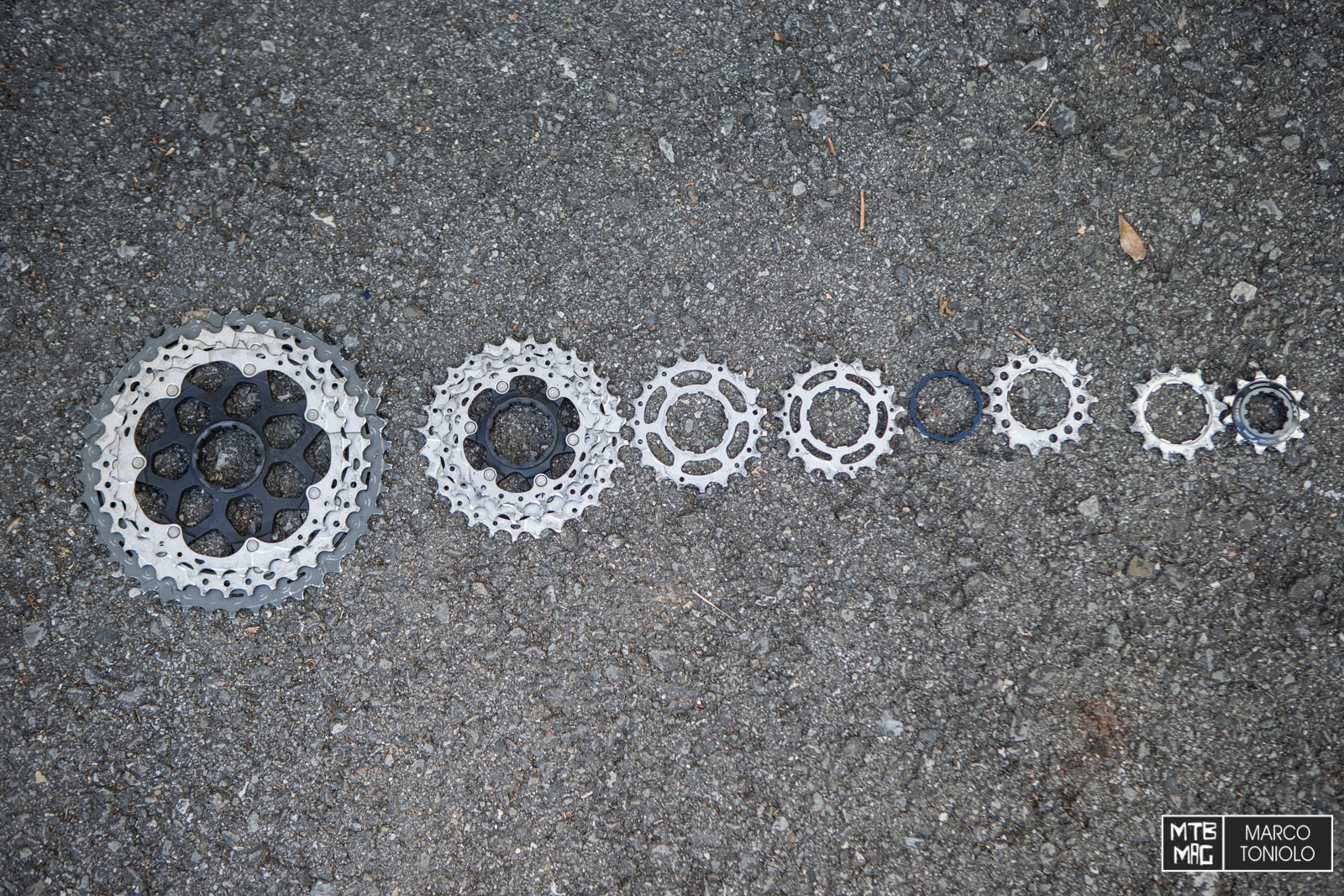 The cassette is made by 7 separate parts, all made of steel except the 42 cog, in alloy. The 42 tooth showed first heavy signs of usage already after the second week of testing: nothing changed in the shifting.  That remained precise and fast as usual, but I noticed that pedaling backwards, when the chain is on the 42 cog, this falls down to the smaller cogs. 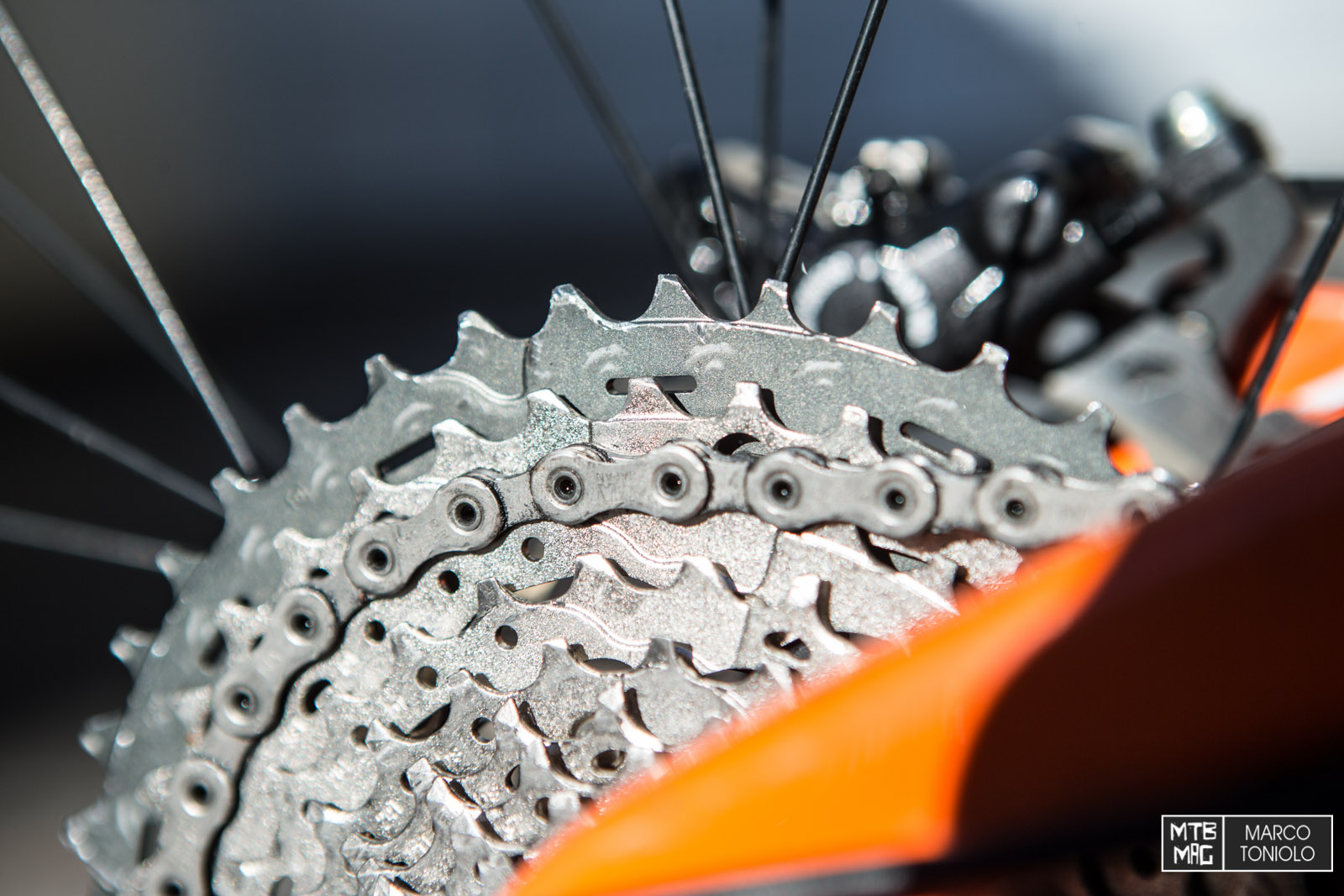 This comes from two factors:

Let’s be clear: for the chain to fall off it needs a nearly 360° back spin that, in practice, never happens. When pedalling backwards in front of a big step, in order to put the pedal in the “full power” position, we tend to pedal backward about 90° maximum. Even if a rider has the tendency to pedal backwards on boring paved descents, he/she will rarely be in the  lightest gear.

It may indeed happen that, pushing the bike, one pedal touches the leg, letting the drivetrain spin backwards. When the rider jumps back on the bike, the chain will be off the 42T. This is not a major issue on a trail ride with friends, but if you are racing it can be quite annoying.

So we asked ourselves how it can happen that Shimano chose a “wrong” chainline for its 1×11 drivetrain, and we found the answer in the easy interchangeability between 1×11, 2×11 and 3×11, keeping crankset and spider the same. Infact 50.4mm is the chainline of a 3x drivetrain, when the chain is in the middle chainring. The chainline Shimano has been using for ages for its 3x products.

On paper a 1×11 drivetrain looks easy to design and project, but in reality it has a lot of differences compared to the common 2x and 3x starting with the spider, the chainline and the available gears. I haven’t brought up the smallest cog available on the Shimano XT: this is a 11T, that brings the advantage to keep using the classic driver bodies people already have on their wheels. At a first glance it sounds like a good idea, until you are start searching for more speed when pedalling. Bottom line, the Shimano single chainring drivetrain has a smaller gear spectrum than SRAM’s XX1 family.

If you think Shimano has been sleeping during the last years, you are making a mistake: their real “single” chainring drivetrain is the Di2, that manages electronically, and with one single shift lever, 22 gears. This is where the Japanese brand invested – and continues to invest – most of their time and resources right now and soon we can expect an XT Di2 at a lower price than the XTR one.

Shimano’s new XT drivetrain is fast, precise and durable, as everybody expected. The rear derailleur’s clutch/chain-tensioning system works great and the chain hasn’t fall off the chainring once during the whole testing process, keeping the shifting smoother than in the past.

The 1×11 set up has a chainline problem that let the chain fall off the 42T cog if pedalling backwards. This problem gets bigger with the time, because the alloy used on the 42T is quite soft and the teeth deteriorate quickly. Shimano is aware of the problem, stay tuned for their future steps to solve it!