We recently visited Orange Bikes in Halifax in the UK to have a look at their bike production facility and witnessed some welding and frame construction of the new Orange Five 27.5″. After watching the birth of their new Five, Orange Bikes sent us one of their first bikes produced to test. We took delivery of it and built it up and have this preview of the bike before we come back in a few months with our final test at our test location.

Orange have continued to position the Five as a trail focused bike, hitting possibly 80 percent of what riders want to be able to do with a bike. Their builds that they offer via their online store or dealers are completely customizable. Orange sent us a highend build that hits the sweet spot with what they say their customers tend to like in a trail bike. In this case the build which is available from their site has had the Maxxis tyre combination added, a Renthal bar build kit and the 150mm Pike/Monarch Plus suspension kit.

With the ride kit selected by Orange which they say is one of their most popular selections we are looking at around €5000 Euros total based on UK VAT. The numbers on the frame put the Orange Five right in the middle of the Trail bike sector. However with their pro build kit specified, we feel that it might be under gunning what is possible to do with the Five based on our initial thoughts. Light Enduro riding with the type of build kit specified is definitely possible in addition to the aim of trail riding. The 66 degree head angle and 72 degree seat tube angle show a bike that is predisposed to be very pedal-able up hill and fast in flat/inclined sections of track. The wheel base lends itself to a bike that can change direction easily. The choice of a 150mm Rockshox Pike up front will open up the head angle half a degree or so, lending the bike to more aggressive possibilities.

Orange have a long tradition and significant experience in producing monocoque frames in house that are made from flat aerospace grade aluminium formed and seam welded into the characteristic frame shape and swing arm structure, with the rear axle width fitting the modern 142mm/12mm axle spacing standard. We should also remember that the frame is a single pivot design which will lend itself towards a spritely active ride with the direct connection to the shock. The lines of the frame lend well to an aesthetic style that is well appreciated by riders who have followed the Orange design ethos over the years. The look differentiates the bike from other bikes in this category. We don’t have a number on exact frame weight for our size of test bike, but when looking out our measured overall weight of 13.3 kilos, we think that it is towards the lighter end of the spectrum for Aluminium frames. Orange reported to us only a 0.47% failure rate in ten years of production of the Five. The frame is powder coated then oven cooked.

The choice of the pro kit add on leads to a Renthal Fatbar set up and a brand new Apex stem. The view from a rider perspective is simplicity and functionality  which fits with the ethos of the bike design. Mounting the new Apex stem and Fatbar, then making all adjustments, the cockpit felt completely right and ready for some fun trail riding. Bar width choice seems right for the large frame size (760mm) with the top tube of the bike lending itself to the short Apex stem combination well, giving a roomy feel upfront. The use of Sram X1 gears and Shimano XT  brakes with only the addition of the seat post control on the bar, left us with all the right bells ringing. No compromises here. 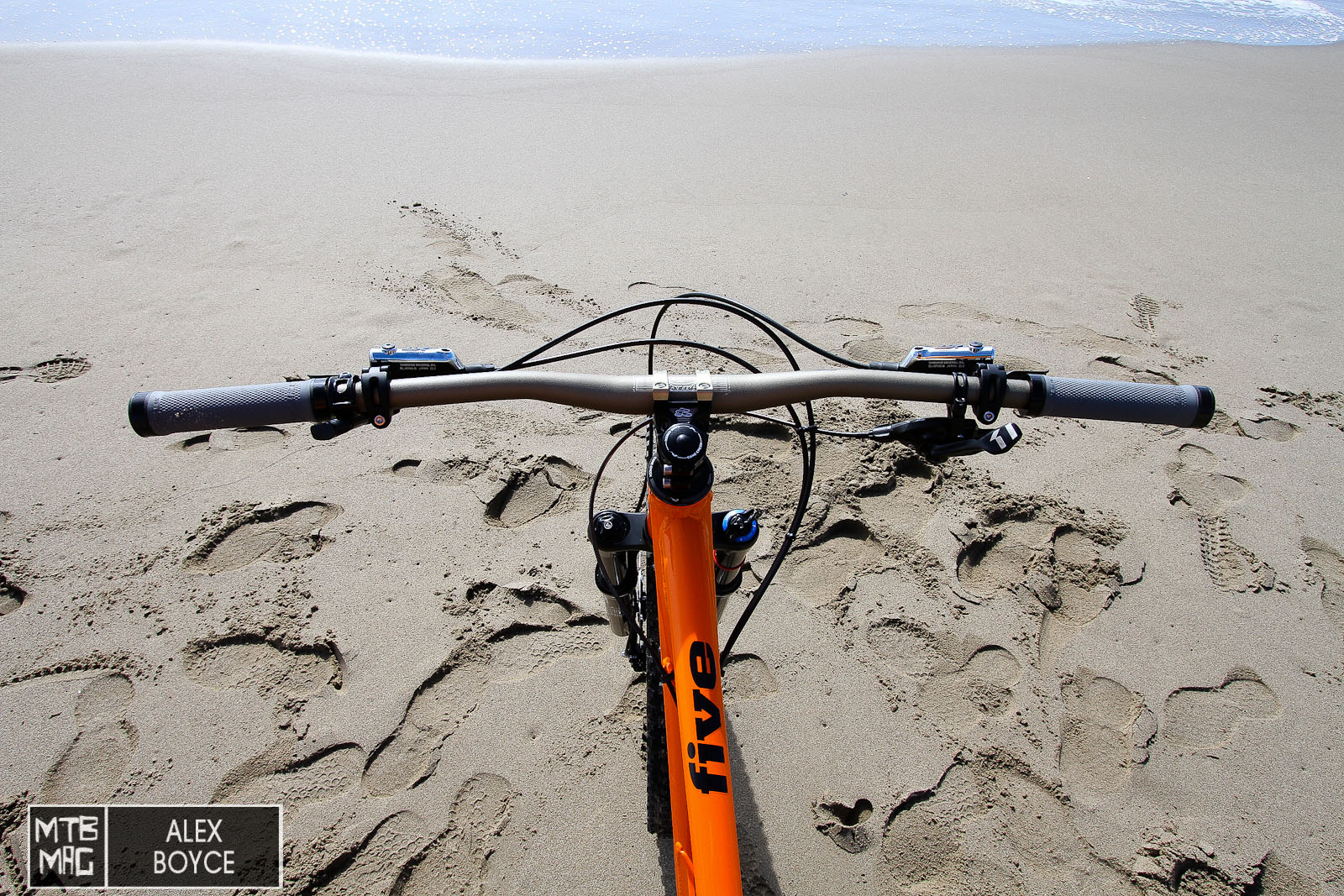 With a range of wheel builds possible Orange chose to go down a solid route with Hope Evo II and Stans rims with a tubeless set-up. This is a serious yet balanced weightwise choice. a strength and weight combination that fits the purpose of the bike mixed with reliability for keeping rolling whatever the weather with a hub choice that is made for bad weather conditions, possibly reflecting the birth place of this bike. The choice of Maxxis High Roller II and Minion up from in tubeless mode is a significantly clear nod in the direction that this bike is to be used. 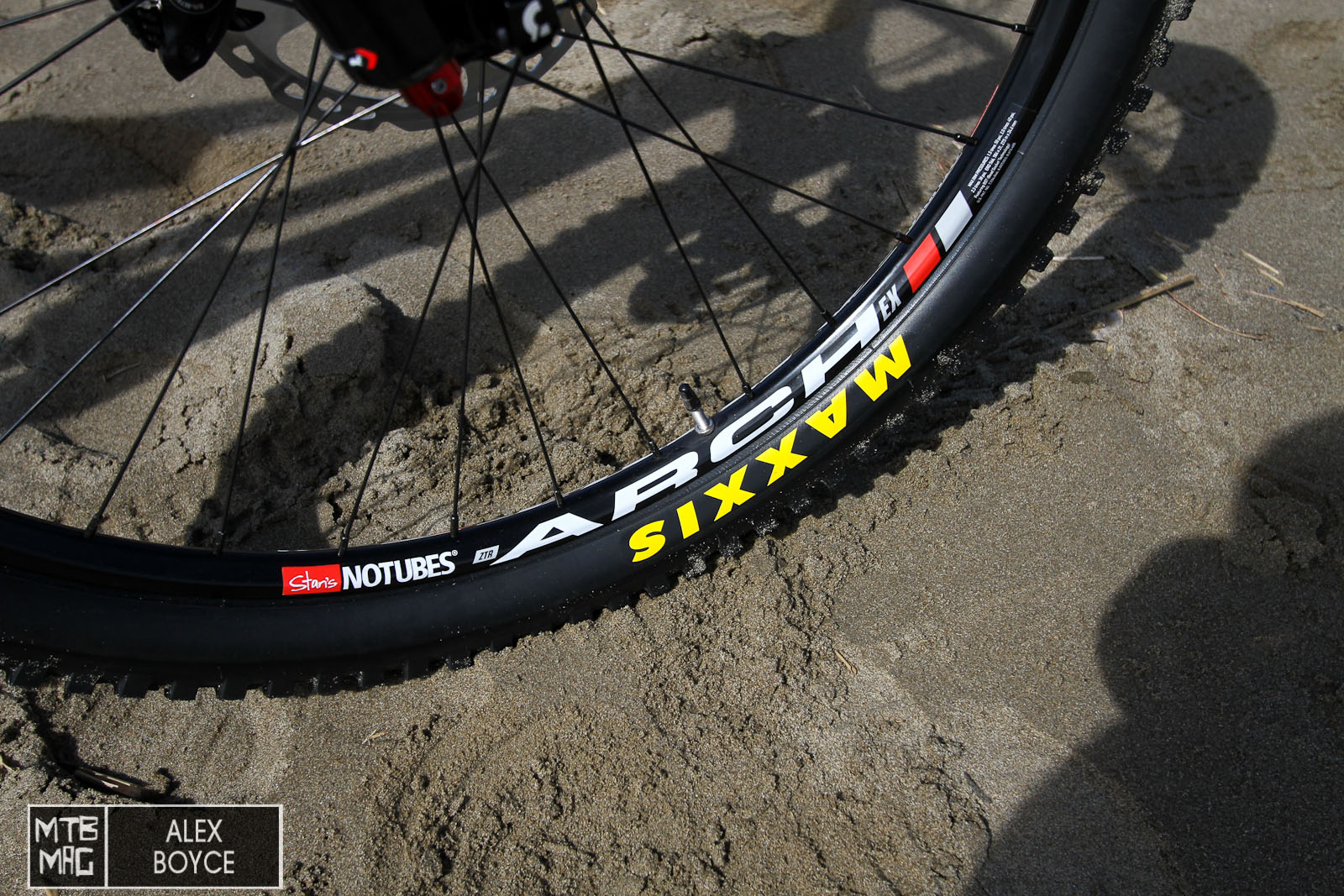 The Five we received has come mounted with a fork and shock upgrade that will work well together. The Monarch Plus has an easy lockout and unlock mode to it that aids it’s self to a responsive ride in descents and a almost complete lockout feel for pedalling. The use of a 150mm Pike up front increases the aggressiveness of the bike and will lend well to the Five being pushed a bit over the rough stuff and keeping the ride sweet.

The use of a single pivot is one of Orange’s trademarks in this category. Orange have worked on updating pivot placement and the suspension has been tuned to give an up to date ride. Simplicity is key to this system, with nothing to go wrong and a very stiff feeling on the frame and pivot join, the bike is not carrying any excessive weight. Yes the choice of a single pivot will lead to an active direct ride most probably, however the time spent on designing and testing this bike has certainly moved it on into line with the form of the new range of 27.5″ bikes that have hit the market and how it will perform on the trail.

Overall we have on paper and now in reality a bike that has come from a traditional historic design and has evolved into this latest trail riding incarnation. Our general feeling before we ride the bike is that the Five with its specifications will be a bike for 85 percent of the riding public. Our initial impressions are that it will be a bike that pleases almost all who ride it. The build kit that the bike has been sent with is a sign of quality and also heritage with most of the bike being made in the UK, including most importantly the frame. We have a truly British home grown, European bike, that in this sense has few competitors as most bikes are made in Taiwan. This is making the Five very appealing and we look forward to trying the bike on our test trails in Punta Ala.