If you saw the news about the revised 2021 Specialized Stumpjumper EVO last week, you may have wondered if and when a new classic Stumpjumper was coming. Well, wonder no more because it’s here. Last month I was fortunate enough to spend some time in Oakridge, Oregon and the Gifford Pinchot Forest in Washington riding the new rig on the same trails that the legendary Trans Cascadia takes place on. I tested the flagship S-Works model, which has 140mm of front travel mated to 130mm out back. So, gone is the separation of a 140mm Stumpy and a 120mm Stumpy ST (short travel) – this all-new bike now splits the middle. It’s also freakishly light at just 26.5 pounds, and one factor that contributes to that weight reduction was a bit surprising – Stumpjumper now forgoes the classic Horst link pivot in lieu of a flex stay rear end. There’s plenty of other things to discuss as well, so read on for the full report… 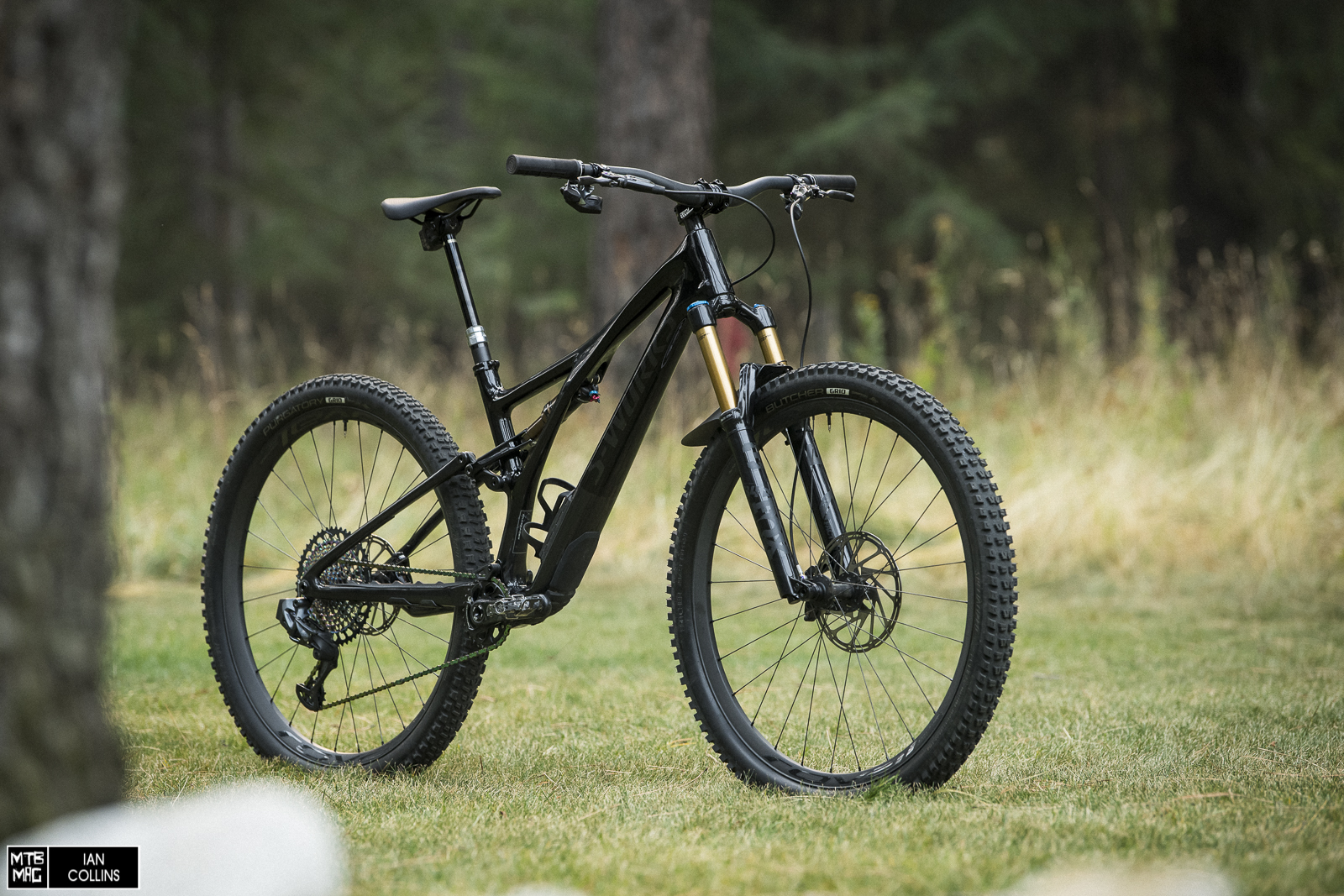 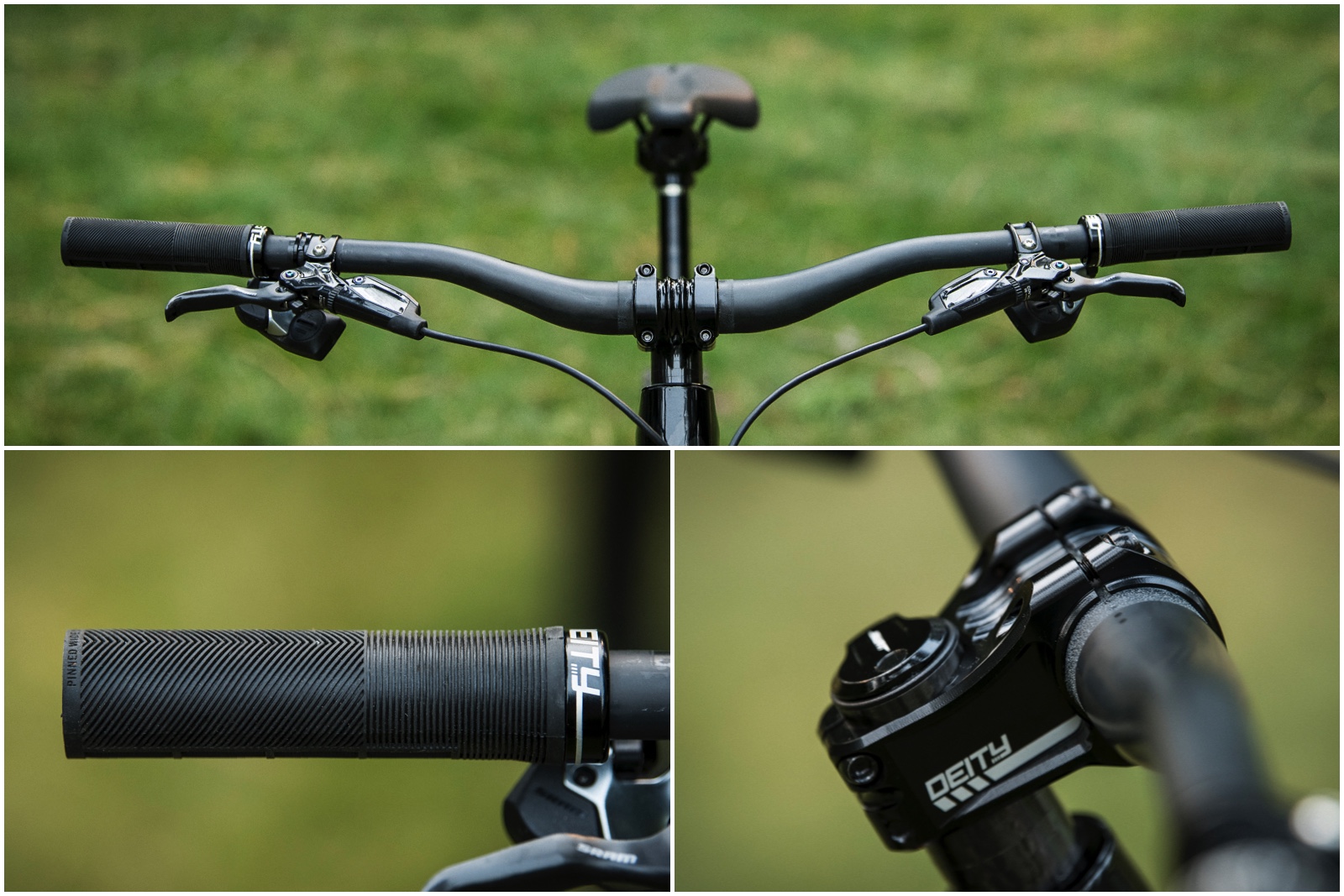 Starting up front with the cockpit, we see some higher end offerings like a sleek and sturdy 50mm Deity Copperhead stem and comfy Knuckleduster grips. The handlebar is from Roval, an in house brand from Specialized who makes some very nice products – namely wheels. The carbon fiber bar was comfortable both in terms of angles and vibration damping. I was slightly disappointed that it was just 780mm as I would have preferred a full 800mm width. 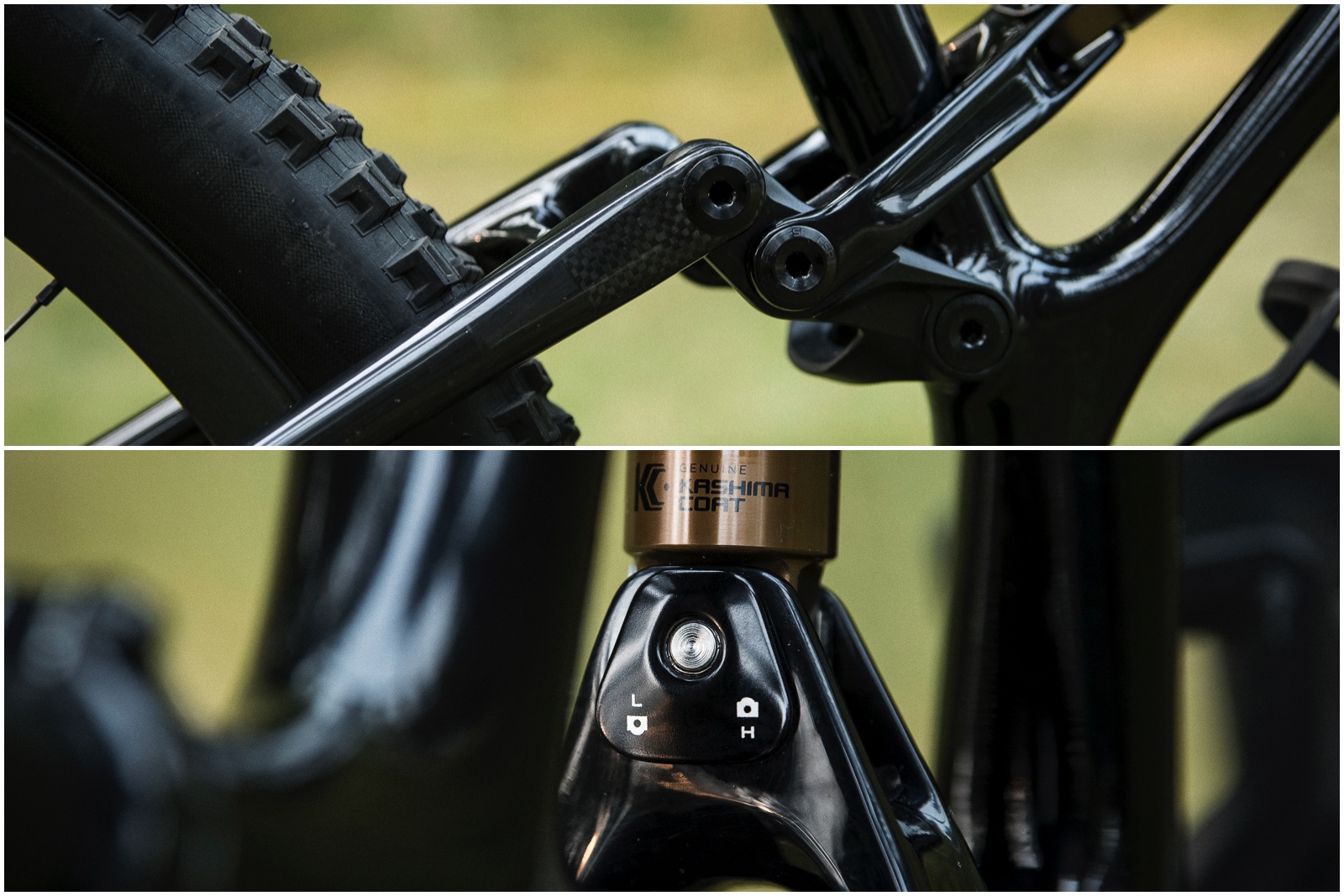 On higher end models such as the spec level offered here, Specialized have opted for a carbon fiber yoke and an aluminum link to drive it. The lower shock eyelet features a cam to toggle between high/steep and low/slack geometry, much like the last iteration of Stumpy. However, this new model is much easier to adjust due to the angled portion at the lower shock eyelet, which makes hardware access less frustrating – especially with a multitool. Much like most Stumpy EVO models, we’re seeing Fox suspension all around. Up front a 34 with 140mm of travel features a 4-way adjustable Grip 2 damper and a short 44mm offset. The new, improved version of the fork for 2021 is excellent, striking a very nicely balanced ratio of weight:stiffness:ride quality and leaving riders with loads of damping adjustments options. Out back, providing 130mm travel is a Fox DPS inline shock featuring a custom Trail RX tune and a standard Open / Trail / Lock style lever. 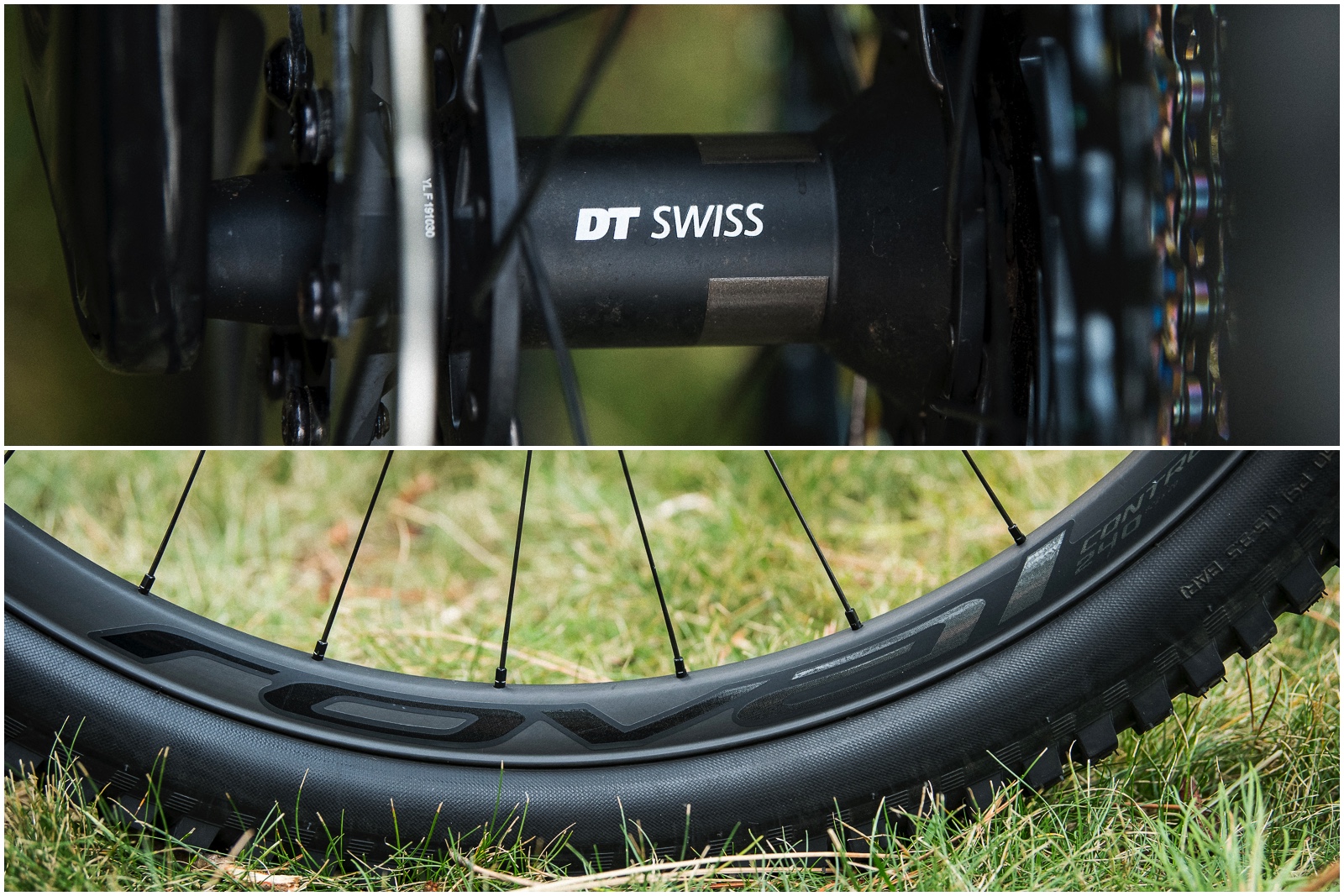 Something new from Roval graces this flagship Stumpy model. These fresh hoops use the same 29mm inner diameter rims used on the freakishly light Control SL Team wheels, only instead of custom straight pull hubs, they use standard DT Swiss 240 hubs. This makes for a super light wheelset that’s also tough, durable and in it for the long haul. 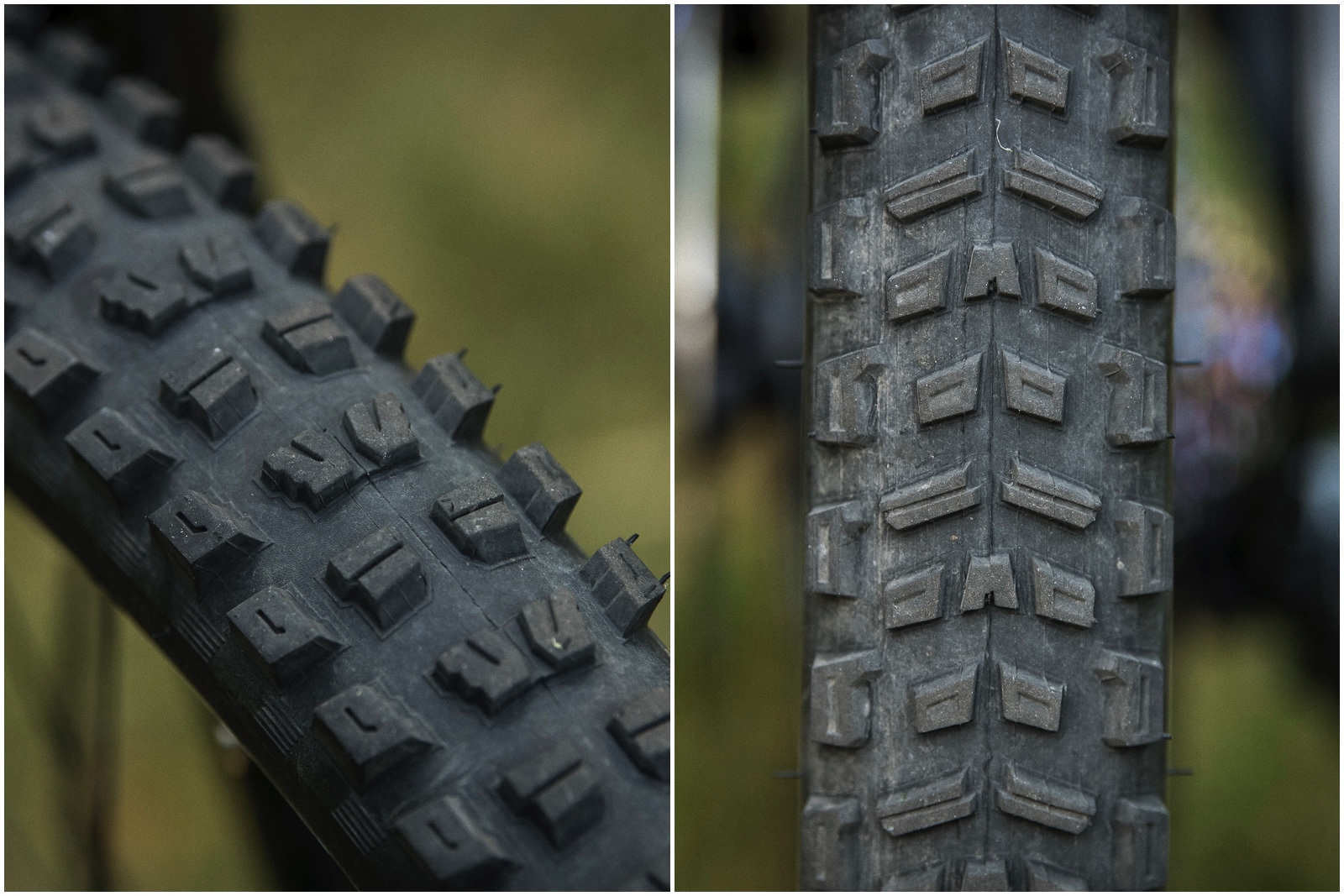 The wheels are wrapped in a 2.3″ Butcher tire with the standard lighter weight Grid casing up front and an all new version of the Purgatory tire out back. The newly updated tread pattern remains a faster rolling option, but features more squared off lines and increased siping. As for compound, I was a little disappointed that these new lighter duty tires haven’t seen the excellent new T9 and T7 compounds that I loved on the Stumpy EVO. Rather, the compound was a bit on the firmer side of things. I’m told that these tires will be updated next year… 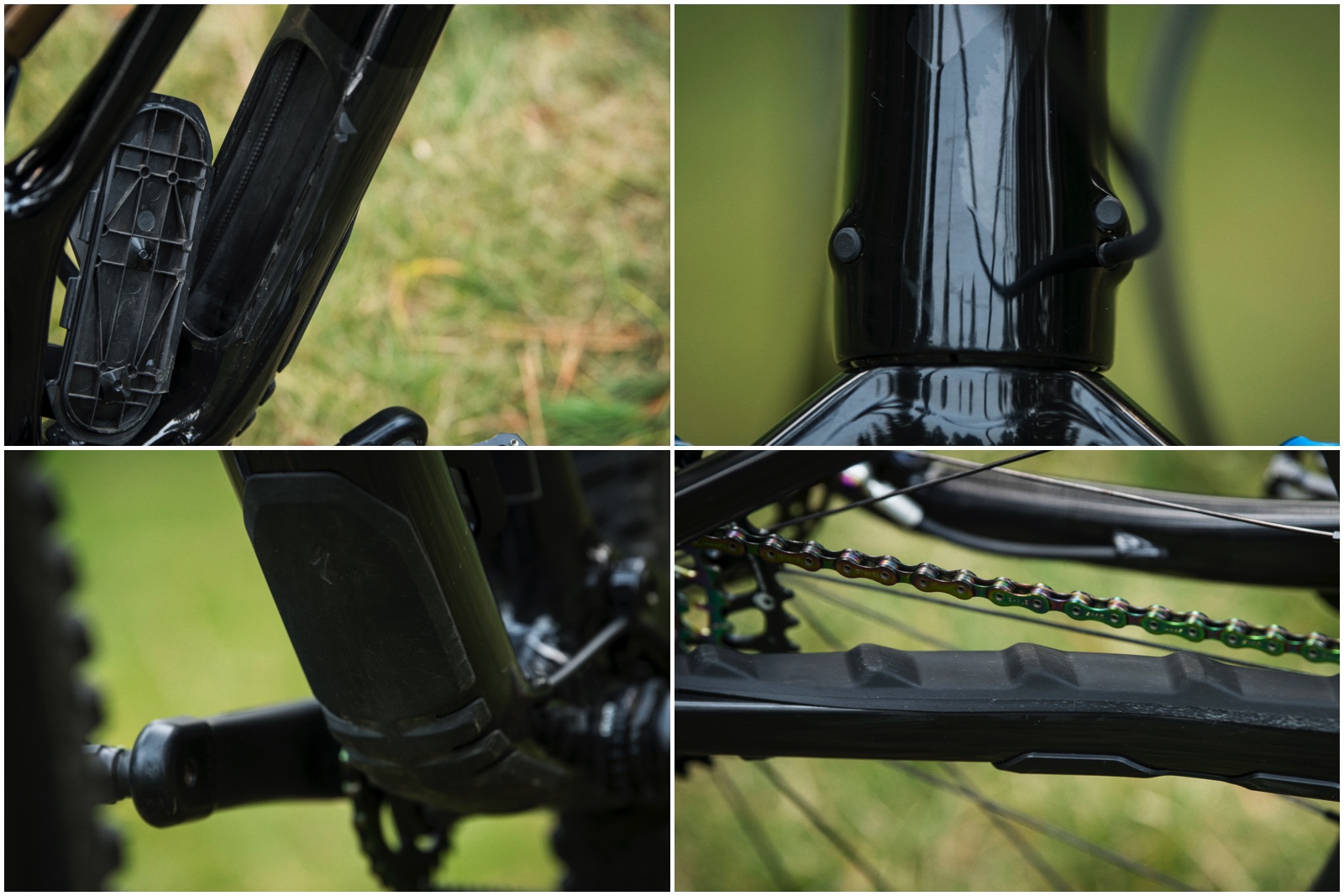 Clockwise, from top left: We’re now used to seeing SWAT downtube storage on most Specialized models and it’s clearly a game changer if you hate carrying a bag. Specialized not only has what is arguably the best internal cable routing – which is sleeved and flows from front to back seamlessly, they also feature stealthy plugs for the sad empty holes left purposeless by the streamlined beauty of AXS. On the chainstay is a protector that guards the frame while limiting noise more than most offerings. Lastly, a rubber sheath protects the downtube from rocks flinging off the front wheel. 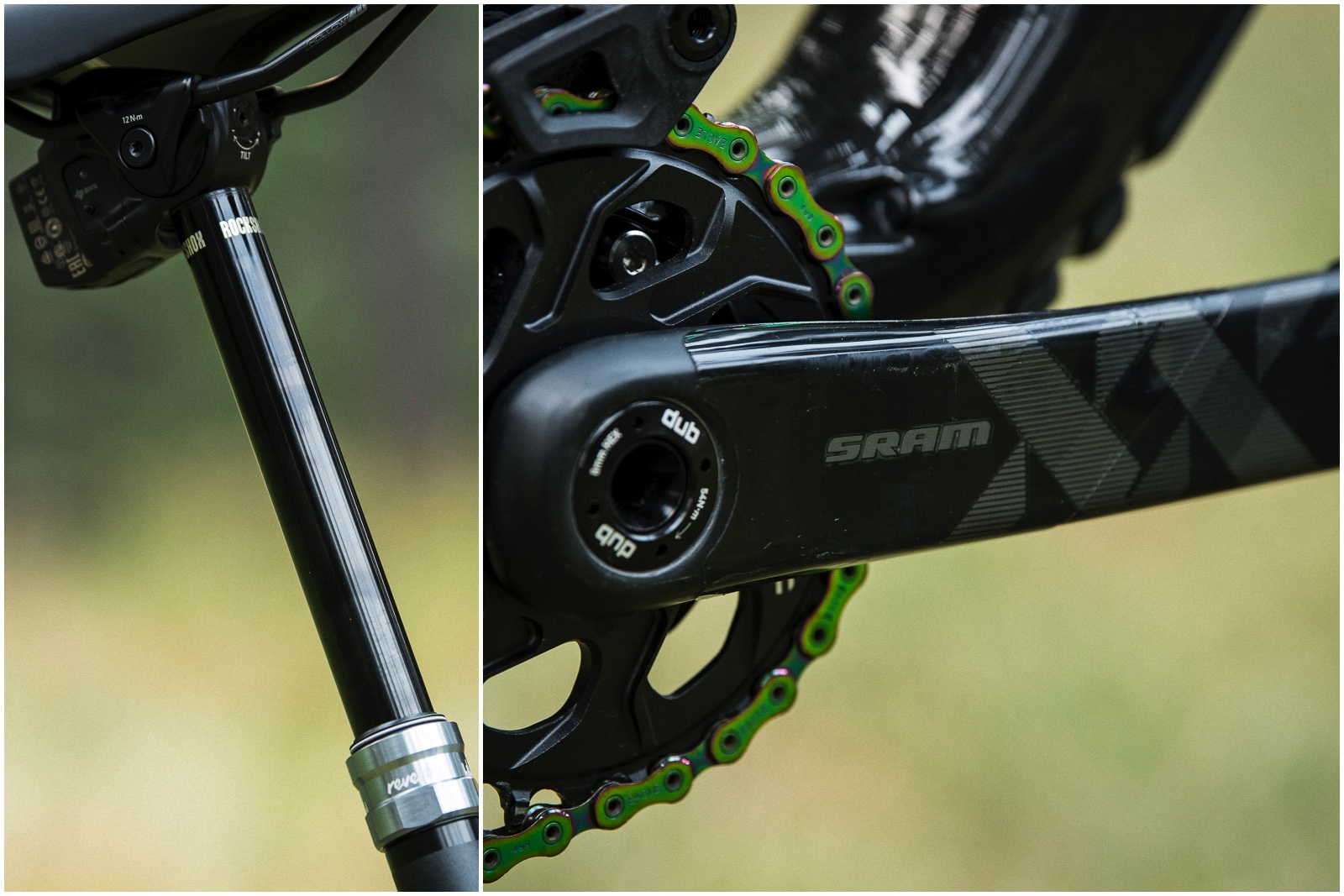 Flagship all around! The seatpost is the truly flawless Reverb AXS wireless from RockShox, featuring 170mm of travel. The S-Works model drivetrain is full XX1 Eagle AXS with a massive range via the 10-52T rear cassette and a 30T cassette. Some may want a 32T, but after a few huge days on the bike on the Trans Cascadia trails, I spent more than my fair share of time in the easiest gear, just barely getting by on the ultra steep climbs, so I wasn’t about to complain. In my opinion, the AXS wireless drivetrain is as good as it gets. I’ve been riding it on this and other bikes for well over a year now and have never, ever missed a shift. 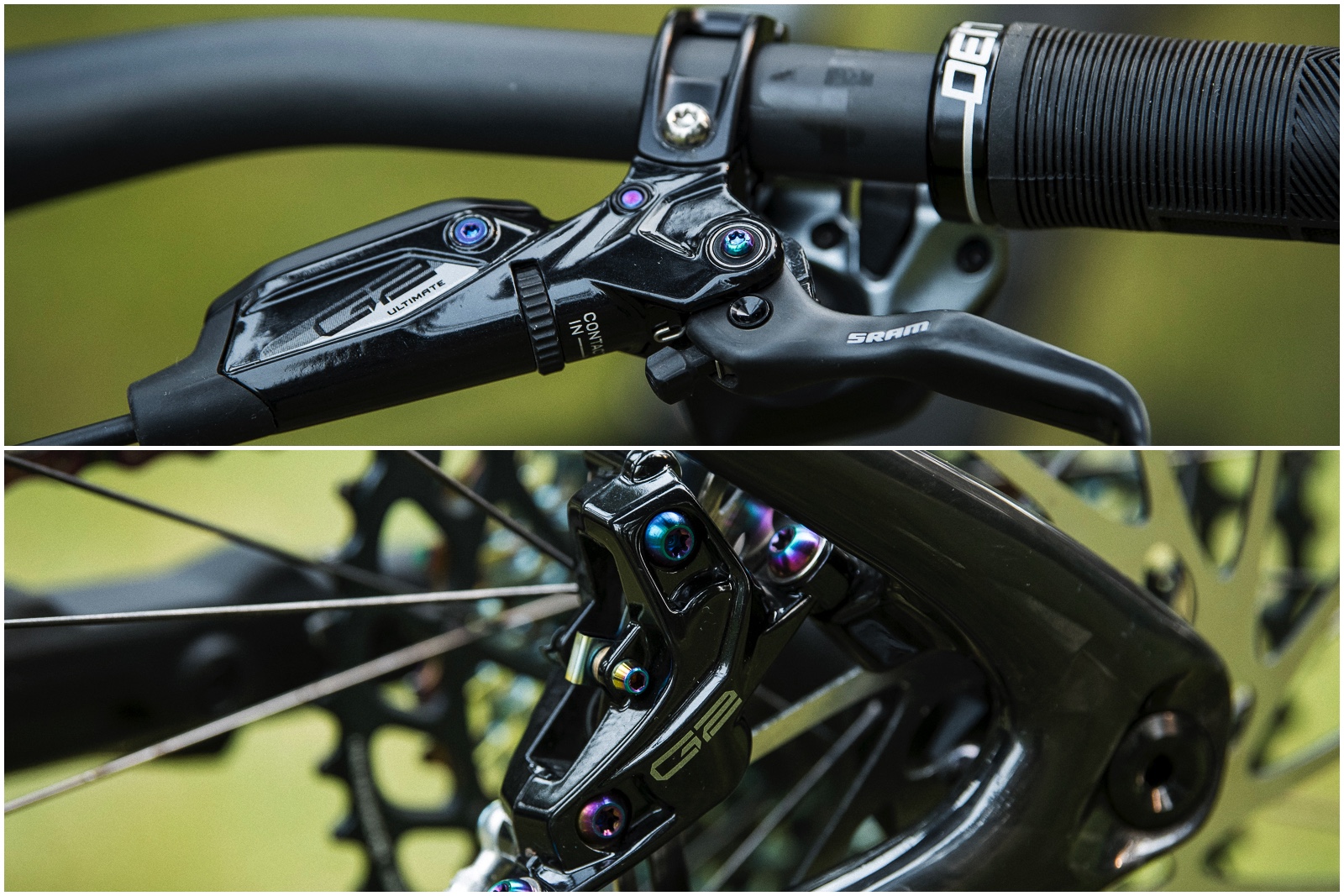 SRAM’s G2 Ultimate brakes provide just the right amount of stopping power, with a nice feel at a very low weight. Rainbow anodized titanium hardware provides a subtle pop of color on an otherwise stealthy black bike. Credit is due to Specialized for speccing an appropriate 200mm/180mm rotor combination on this bike rather than opting for 180/160 in an attempt to get the weight down further. The extra power is very much worth a little extra weight.

Most of the numbers here are on par with what we’d expect these days. There’s nothing groundbreaking or earth shattering, but keep in mind that this is the “staple” trail bike for Specialized, not exactly a project bike. It’s worth pausing and giving the brand props for a couple of things. First, the fact that there are 6 sizes gives riders loads of options and really limits the likelihood of them feeling stuck between sizes. Second, on the larger sizes (S5 and S6) the chainstay length gets a bump from a relatively short 432mm to 442mm. This helps preserve a more balanced front:back ratio as the reach figures grow, in turn helping to keep riders feeling centered in the bike.

Right out of the gate, the ultra low weight was a nice treat, particularly on the climbs. From a kinematic standpoint, the Stumpy sees improved efficiency due to a few factors – namely a smarter main pivot location. Bear in mind, the low weight was partially due to the flagship spec on this particular S-Works model in test. With that said, the frame itself is 2420 grams, which is 100 grams lighter than its predecessor, which was already pretty light. So regardless of spec this Stumpjumper will be pretty darn lightweight in general. At 6 foot tall I was very comfortable on the S4 size but didn’t exactly feel all that spread out, leaving me wondering about an S5. 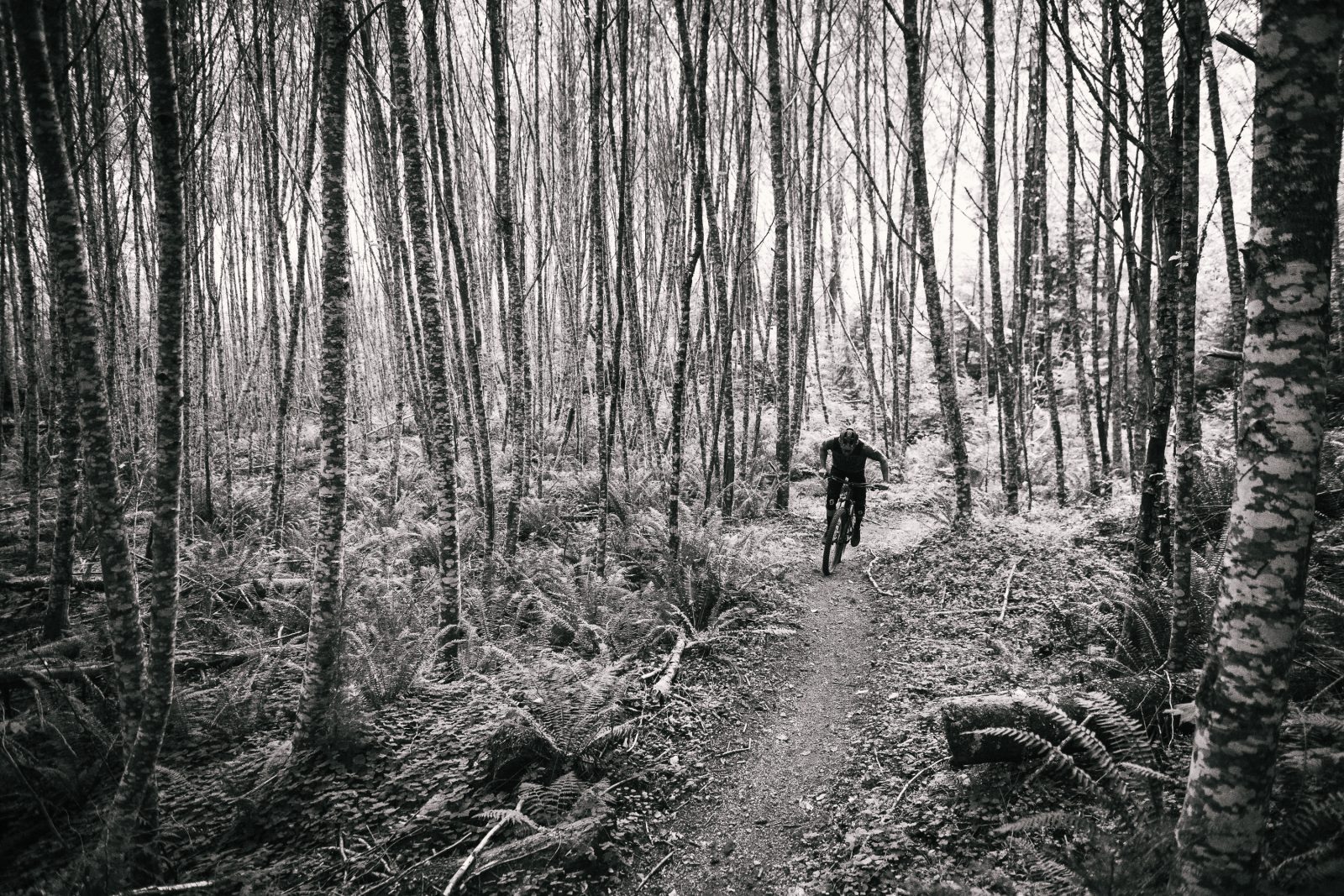 From the get go I was very curious to see how the flex stay would affect the ride characteristics. While I don’t have any hard data to base this off of, I do think it may have contributed to an increased sensation of liveliness – which made its presence felt right away. Then again, that may also be attributable to a refined layup and improved kinematics/suspension. That was also front and center out of the gate. On the topic of suspension, the new bike takes a better stance on both the air spring curve and tuning elements. Much like the Stumpy EVO, the bikes are shipped with a middle of the road sized volume reducer, so riders of all sizes have wiggle room for tuning the bike’s progression to their liking. Regarding tuning on the hydraulic side, I feel that their resident suspension guru and laboratory eyewear aficionado, Chance Ferro got the tune just right. All of the above made for a bike that checked the boxes when it came to sensitivity, mid stroke support and bottoming resistance. 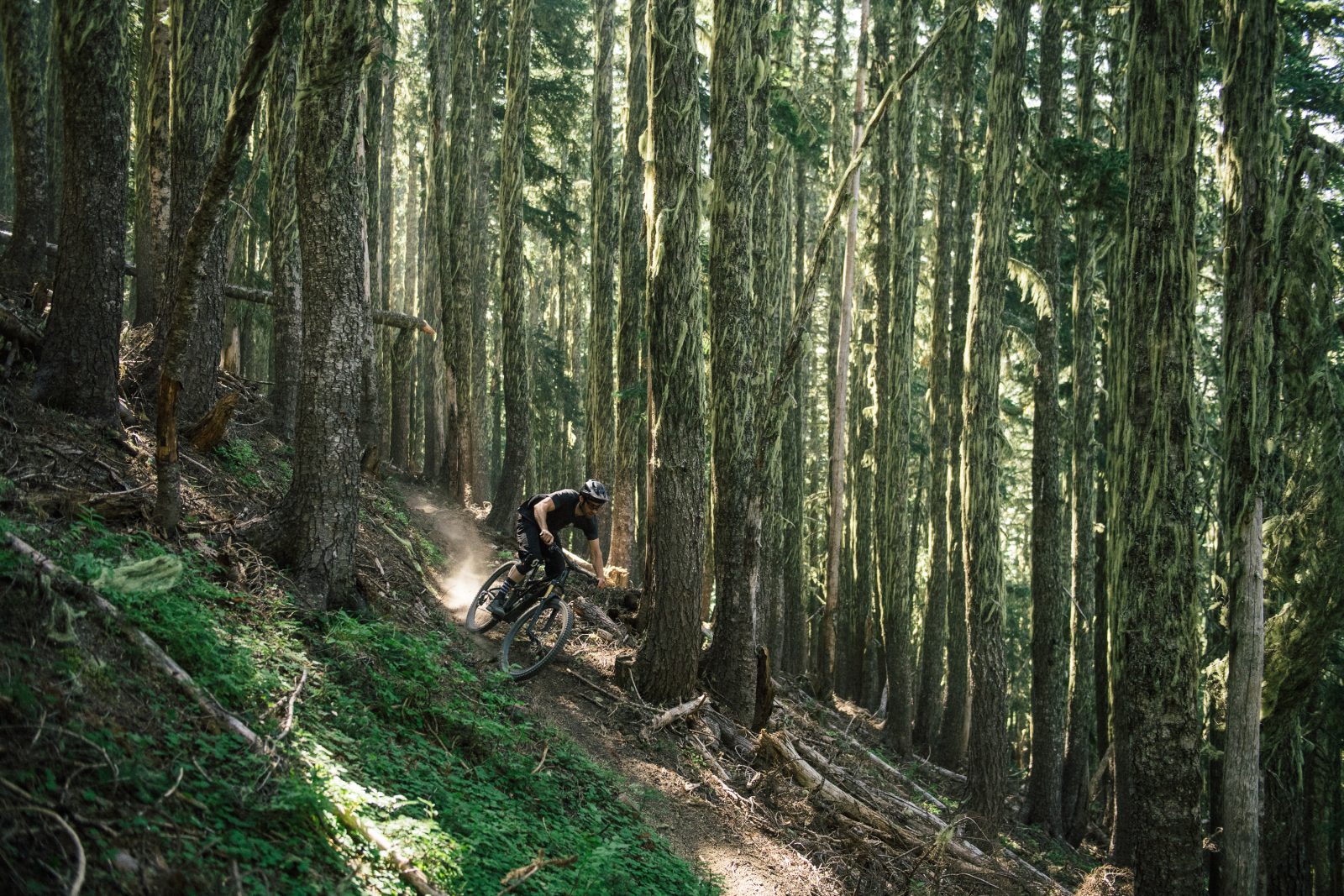 With the above in mind, I don’t the rear suspension was necessarily the glowing highlight of the bike. Don’t get me wrong, it is quite good, but it has a rather high leverage rate of 2.88:1 and a pretty average rate of progression at 18.8%. Personally I feel that a lower leverage rate, more progression and perhaps a rear shock with a piggyback would unlock a bit more potential on square edge hits and long descents, while allowing the bike to be pushed past the limits of what 130mm travel typically offers. Keep in mind, that’s just my ultra picky take, and a piggyback shock certainly is an aftermarket possibility.

So what are highlights? That’s a long list…To me the big standouts are the frame’s layup, geometry and features. In typical Stumpjumper fashion, the handling is top rate and the bike is a sprightly, nimble all rounder with a poise that’s very nicely centered in terms of balancing both climbing and descending duties admirably. It’s very easy to flick around, and is surprisingly boosty and comfortable off the ground – especially for a bike that’s so efficient on the ups. 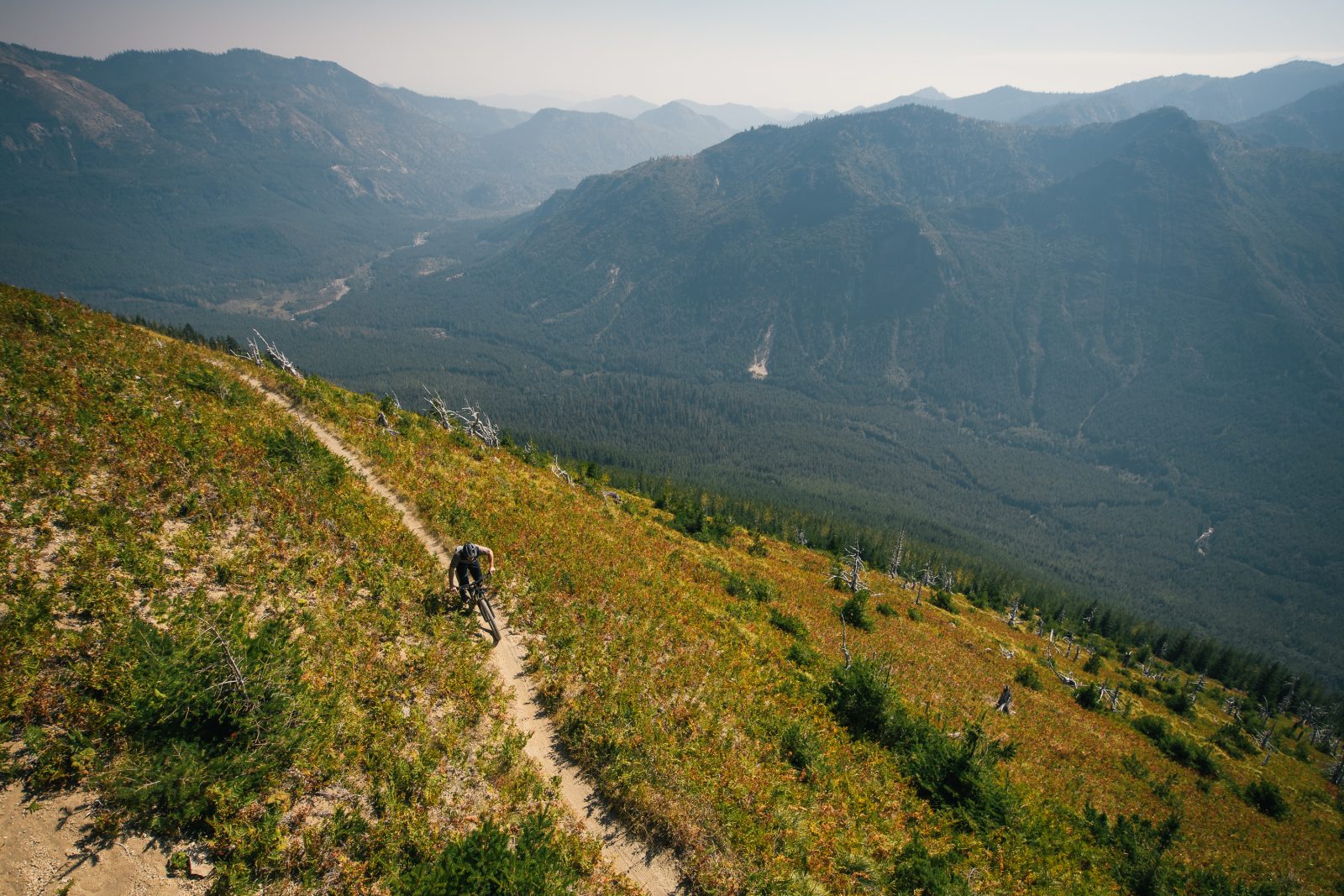 Aside from handling and ride quality itself, it’s worth touching on what a well thought out bike this is from a design standpoint. Being out in front of the crowd by innovating smart features that improve the ride is something that has always been a hallmark at Specialized and it’s worth stressing that in a review. The SWAT downtube is especially nice on a bike in this category where you can bring snacks, a rain jacket, a tube and the required bits to fix flats all inside of your bike. Some of the following little things also go a long way. The cable housing keeps things quiet and is both a dream come true for mechanics and aesthetes alike. Via smart design, the chainstay protector silences the ride more than the competition, so for the discerning rider who wants to focus on the trail ahead, that’s just one more nice touch. As far as spec is concerned, there isn’t much I’d change, but that should be a given with a flagship build – another 20mm in bar width and stickier tires would be nice, but that’s a short list. As I noted in my Stumpy EVO review, the mid level bikes boast an incredible value, so if the just shy of $10k price tag turns you off, perhaps it’s worth a look at those bikes while keeping in mind the manners and attributes discussed above as regards the frame itself. On those models you’ll see similar excellent components like Eagle drivetrains, G2 brakes and Fox suspension, only at a more accessible pricepoints. The last thing worth pointing out is that these new Roval Control SL wheels are heavenly. They’re freakishly light, which translated to brilliant acceleration, but they’re also remarkably stiff and strong. I had a few “oh snap” moments where I was all but certain that it was game over for my rim, but they always emerged unscathed.

From a broader perspective this is an excellent all around trail bike. I think it was a wise move to narrow the stratum in the Stumjumper lineup with this single model landing squarely between an Epic EVO and a Stumjumper EVO. The suspension and geometry updates go a long way compared to the last iteration of the bike. Its low weight is a dream come true on both big climbs and last minute course corrections alike, while the frame’s incredible layup is svelte as can be. All in all, this bike is what I’ve come to expect when I get to test an all new Stumpjumper.